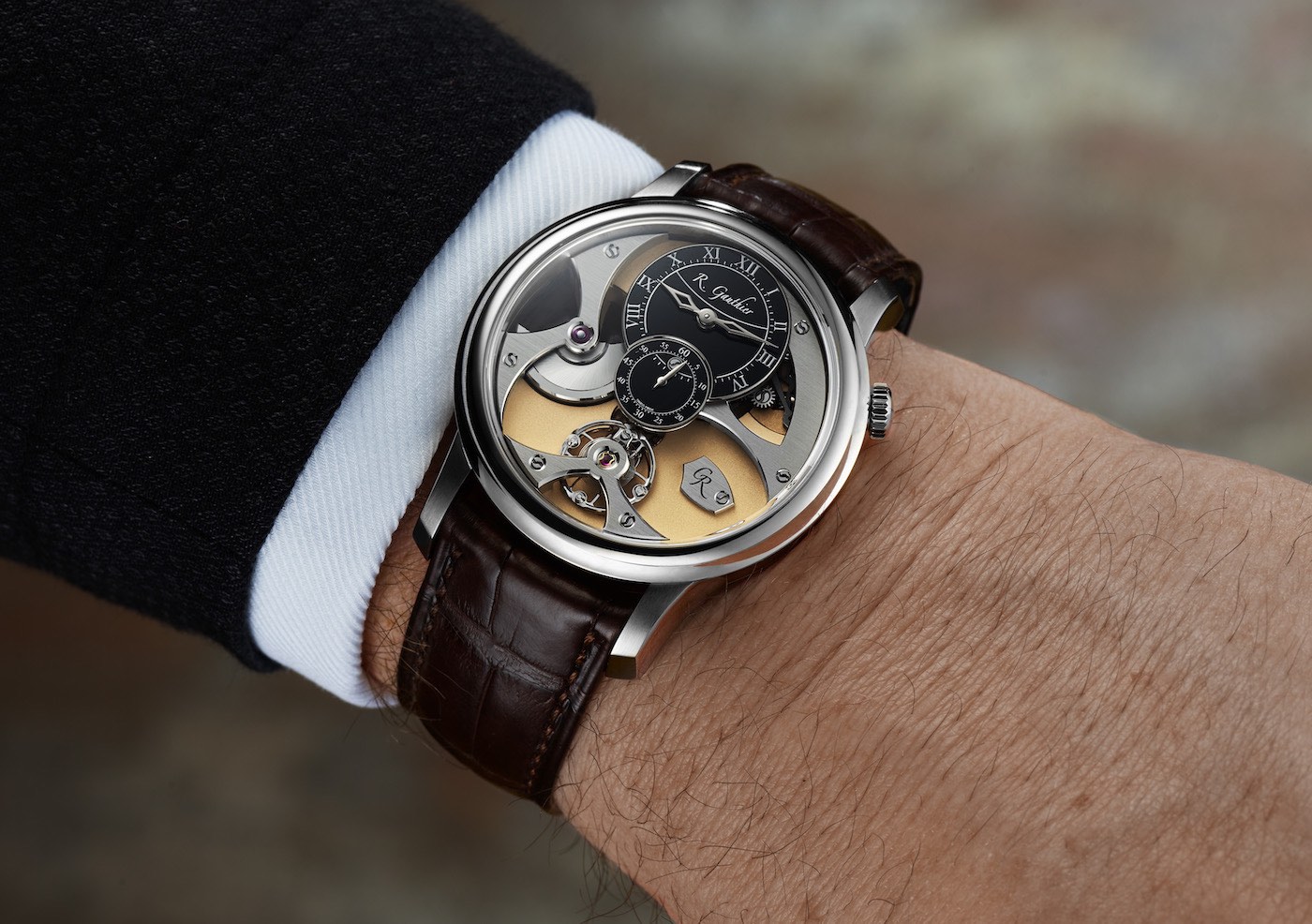 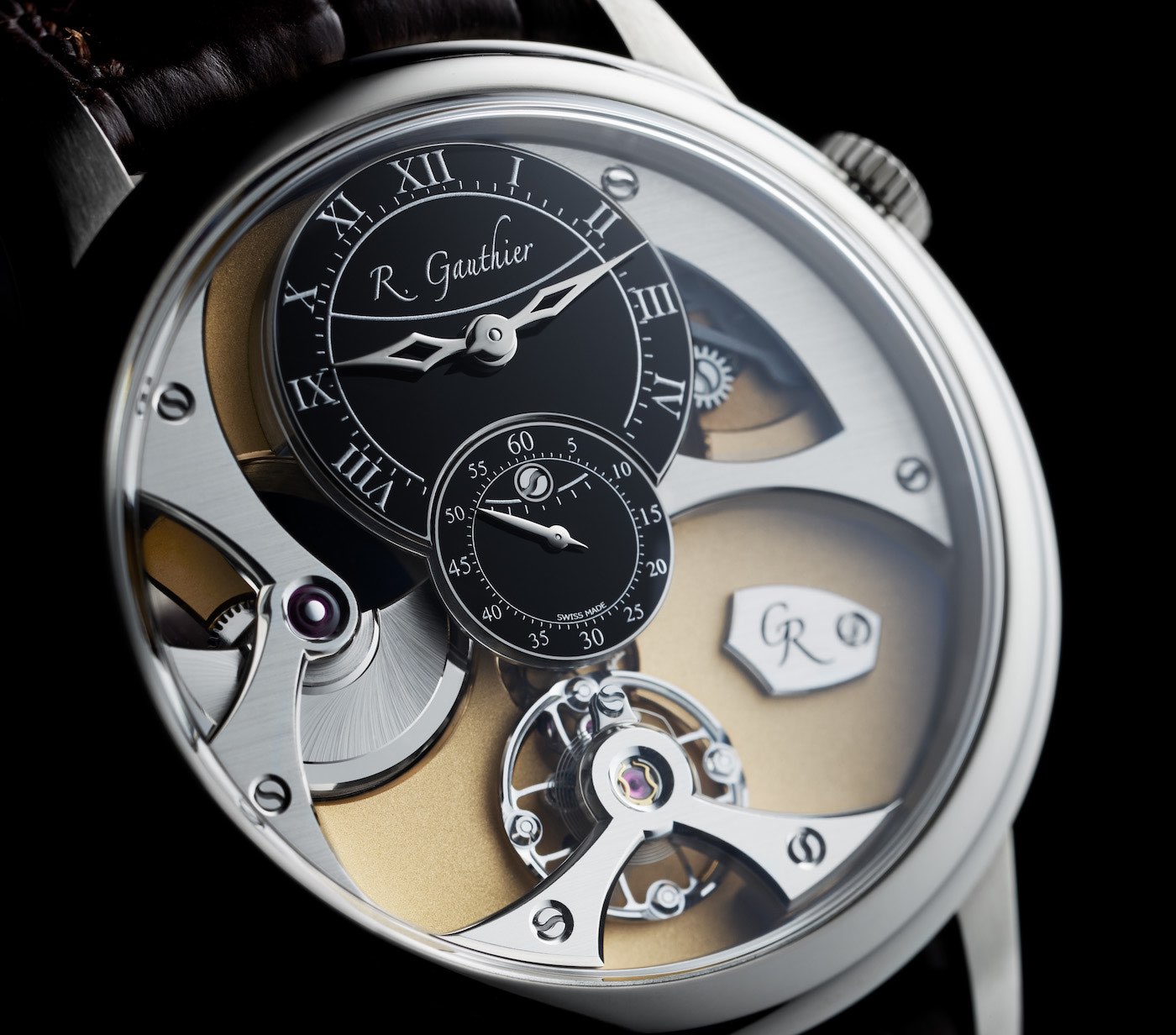 This release sees a model that has previously been made in rose gold, titanium, and platinum, and has finally hit the shelves in white gold. The rose gold models from 2017 also used the same aesthetic format as this current model, teaming a frosted mainplate with horizontally brushed bridges. This is in contrast to the platinum version, which used frosted bridges as well. By employing a gold mainplate, the newest daily members give off a much more heritage feel in comparison to the starker and more futuristic appearance of the rose gold models that featured blackened movements. 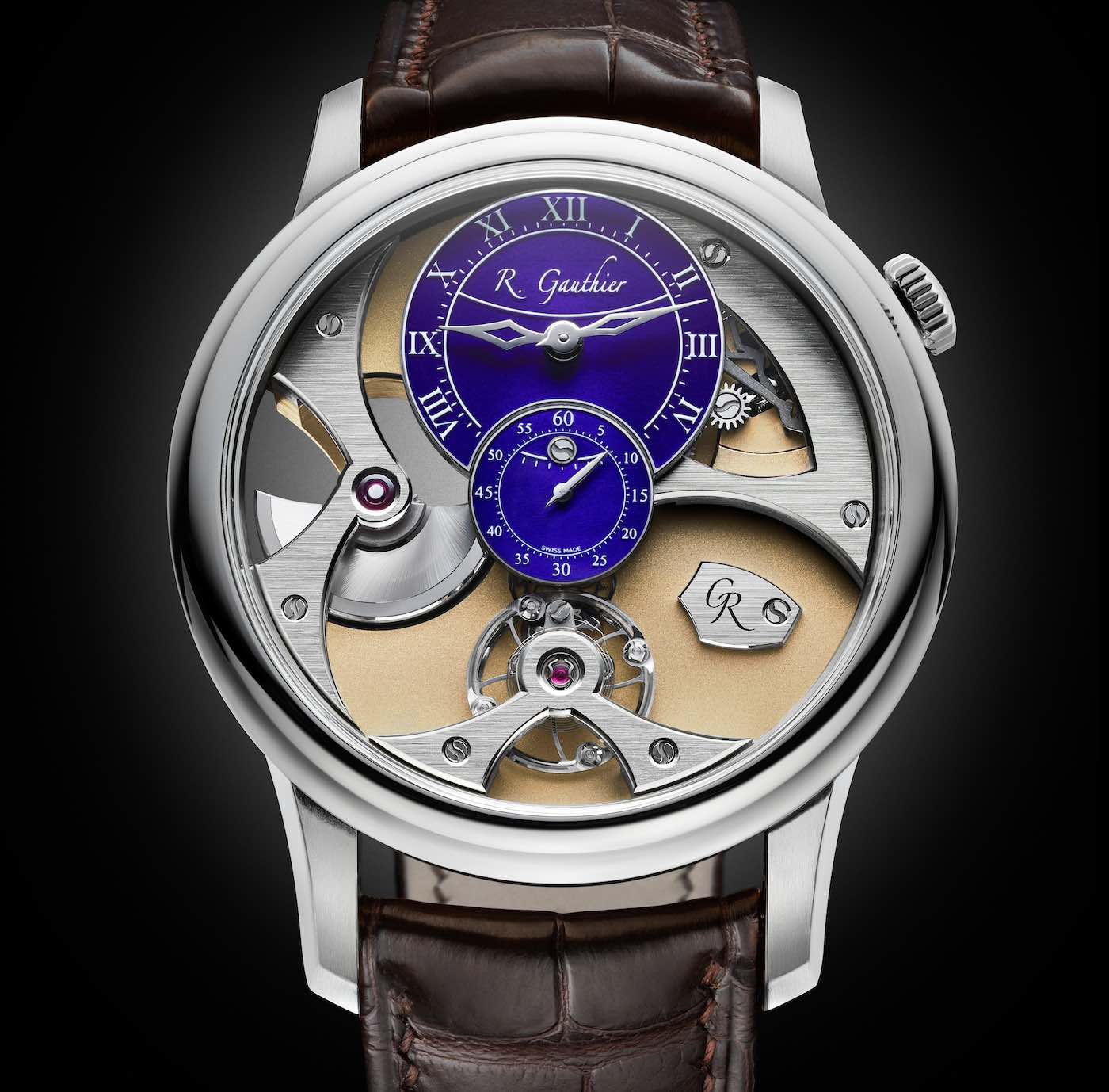 The movement of the Romain Gauthier Insight Micro-Rotor series is the star of the show. As the case materials change and evolve around it, the in-house caliber remains largely unchanged. The movement is treated with 4.5N rose gold, palladium, and rhodium, enabling the active components to stand out against the passive background. The off-center time-telling dial sits at 12 o’clock, and the small seconds dial directly beneath it, encroaching upon its lowest quadrant. In the 9 o’clock position the 22k white gold micro-rotor steals attention. Suspended between two blade-like bridges (that remind me of something one might expect to find on a McGonigle timepiece), and spinning between two prominent corundum bearings, the rotor spins freely, winding the movement bi-directionally and providing it with 80 hours of power reserve on a full charge. The movement ticks at 28,800vph, is comprised of 206 components, and measures in at 32.1mm by 68mm. The case that houses it is a very wearable 39.5mm-wide and 12.9mm at its highest point. It is water resistant to 50 meters and has front and back sapphire crystals, with interior anti-reflective coating on both. The winding and setting crown sits at two o’clock. 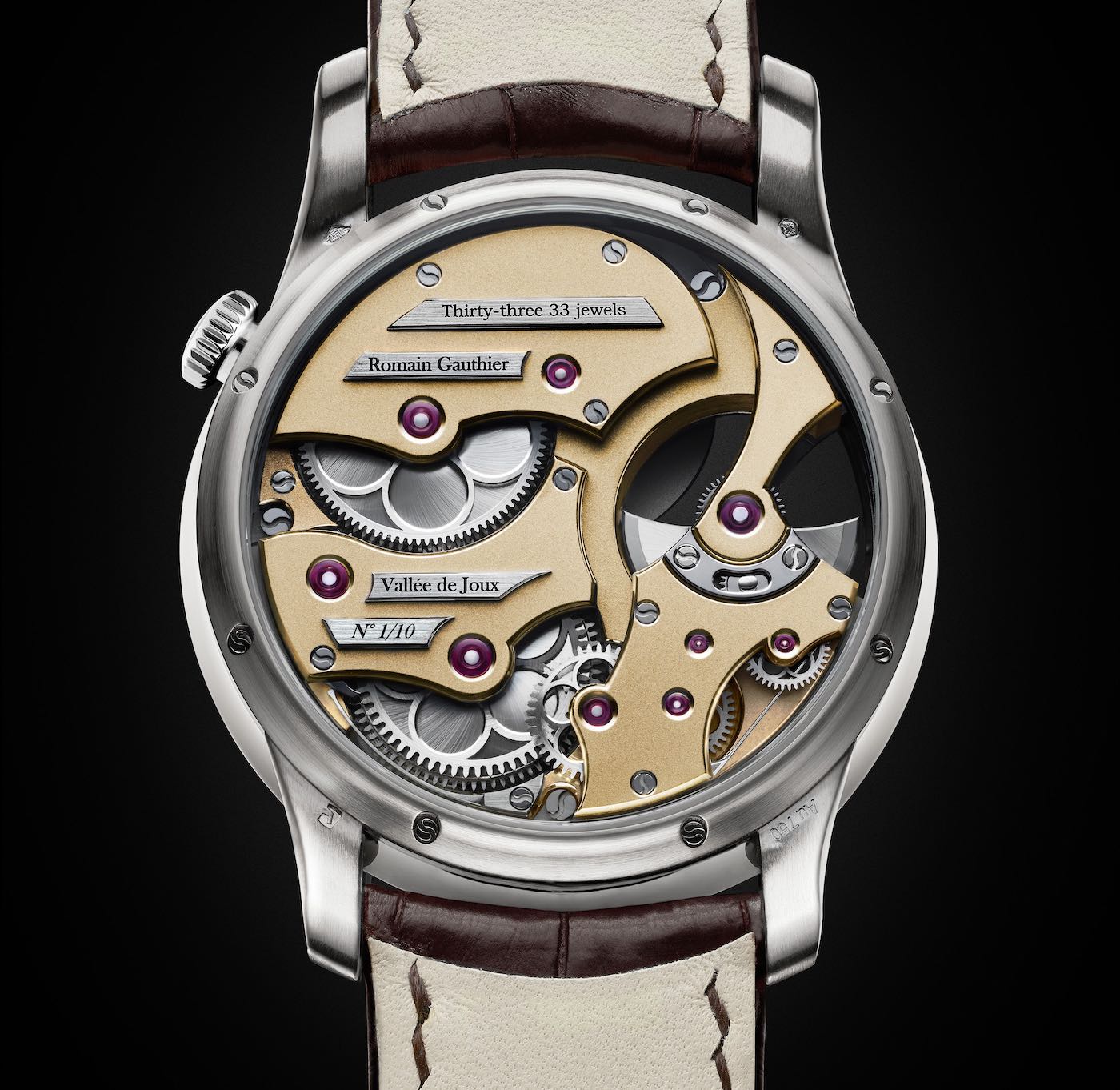 I am a fan of Romain Gauthier. I feel he strikes a nice balance between novelty and digestibility. There is visual interest in the dials of his watches, but never distractingly so. Most pleasing is the absolute excellence of the hand skills on show. Painstakingly frosted bridges and plates, with polished, chamfered edges revealing the tastefully skeletonized wheels are a treat. And as for those wheels, little more could be asked of them in terms of class. I’ve never been a fan of complete skeletonization. I have always found it a bit too loud to look at. But I appreciate the skill that goes into it. Seeing a little bit of that artisanal ability on the wheels provides a perfect balance to my eye, while also adding a playfulness (with those circular spokes) that is dearly appreciated. 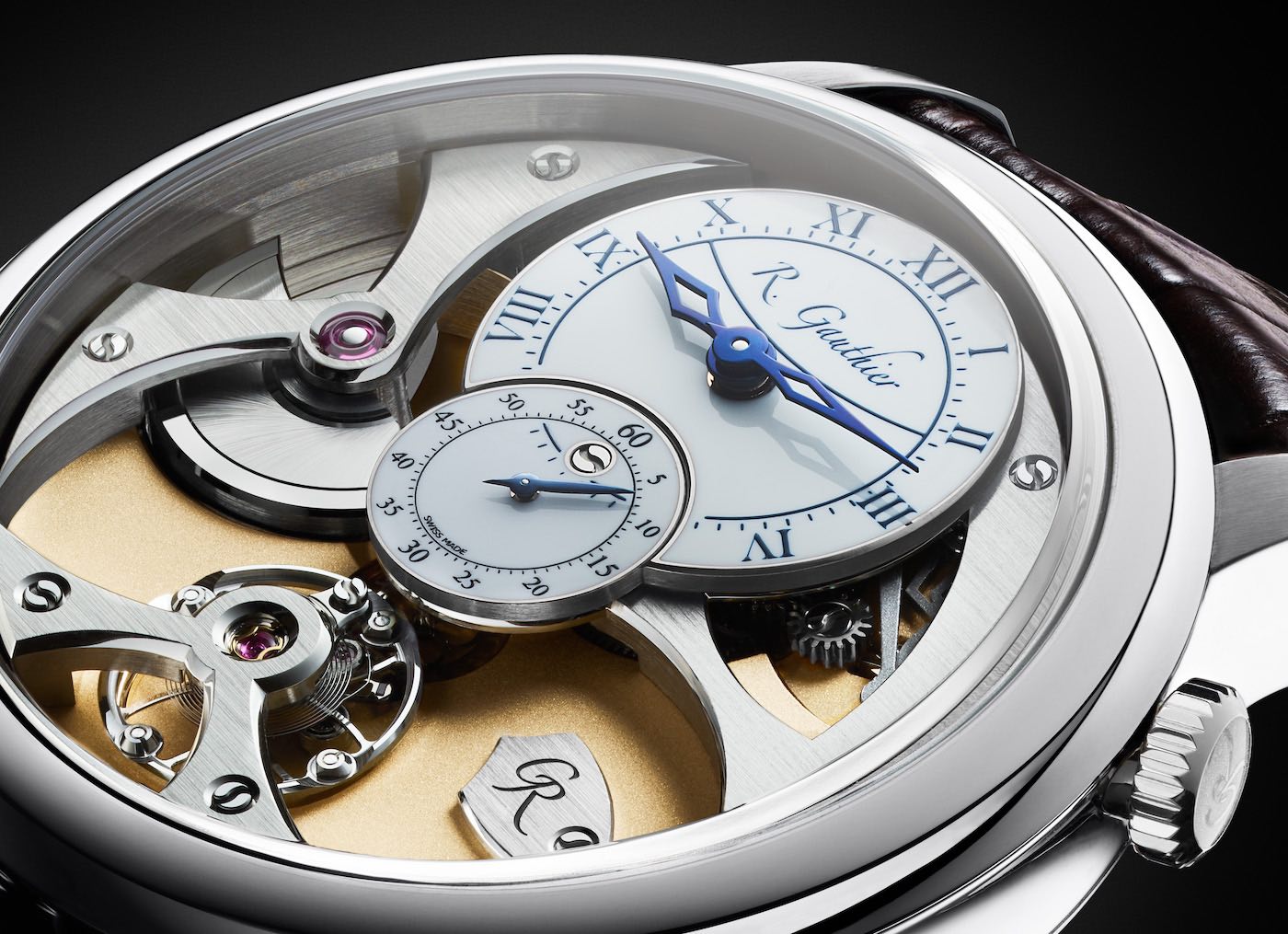 This, as one would expect from such haute horlogerie, is a strictly limited piece. With three dial variations, there will be a total of 30 pieces, ten in each color. All three oven-fired enamel dials — in blue, black, and white — have their own #/10 plaque attached to the train bridge of the movement. These pieces are priced at CHF 79,000, excluding taxes. Learn more at romaingauthier.com.