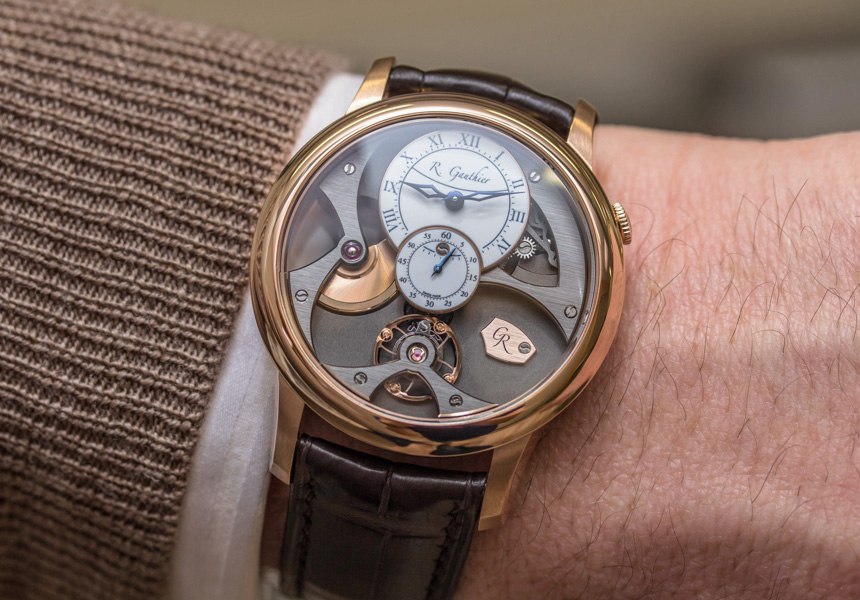 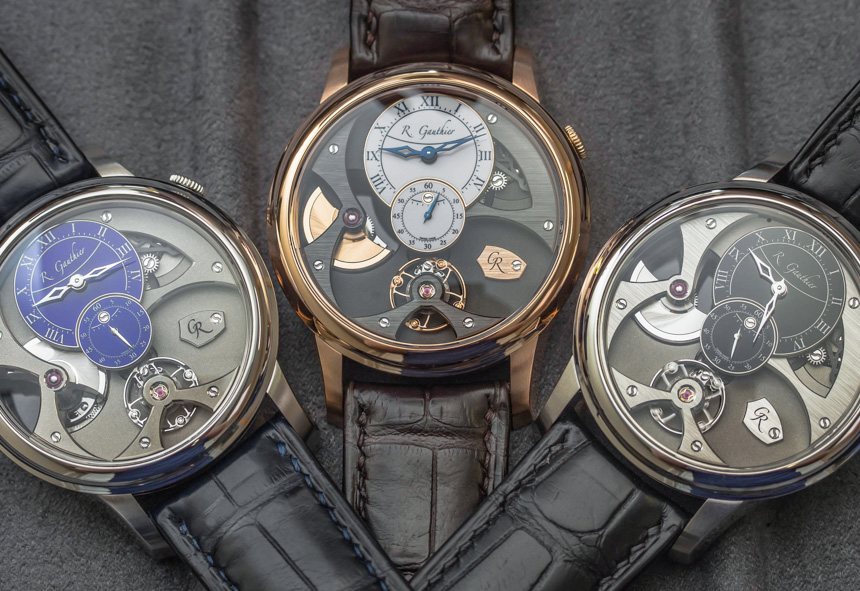 In recent times, haute horology brands have been paring down on their offerings by producing simpler watches. Greubel Forsey, famous for its tourbillon watches, released the Signature 1 last year – a time-only, non-tourbillon watch that is the brand’s simplest yet. Likewise, Romain Gauthier announced its new time-only Insight Micro-Rotor watch earlier this year at Baselworld 2017. Like the Signature One, the Romain Gauthier Insight Micro-Rotor only tells the time. But even though it may look simple, the amount of work that goes into the Insight Micro-Rotor and its level of craftsmanship is still very high. 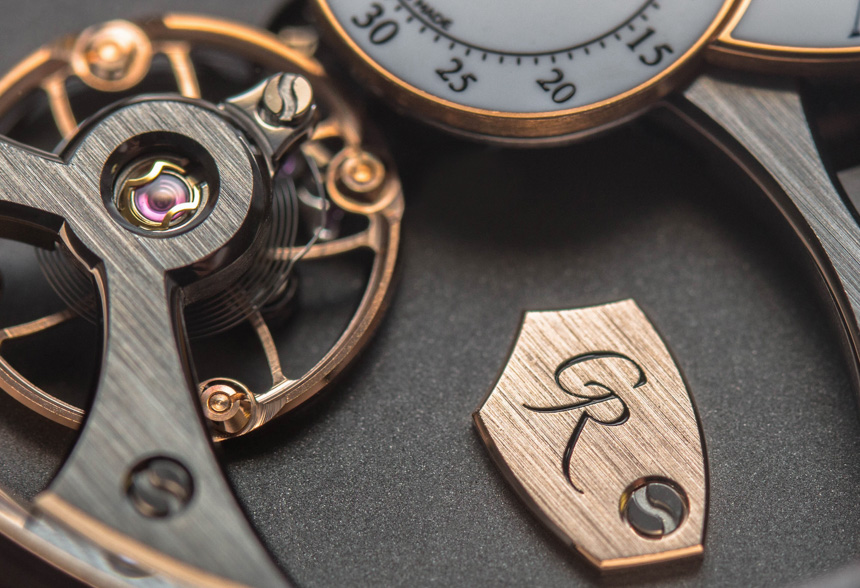 Let’s cover the basics first. The Insight Micro-Rotor is available in a red gold or platinum case, and with a white, blue, or black enamel dial. Each model is limited to just 10 pieces, which means that there will only be 60 Insight Micro-Rotor watches in total. The diameter of the case measures a very reasonable 39.5mm and thickness is 12.9mm. On the wrist, the Insight Micro-Rotor wears a tad larger than what its dimensions would suggest. This is likely due to the slightly long lugs. 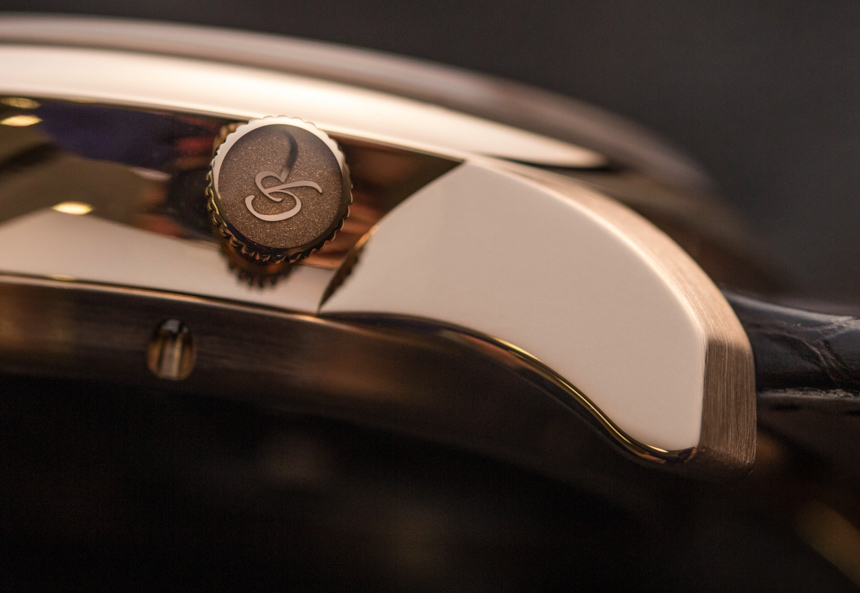 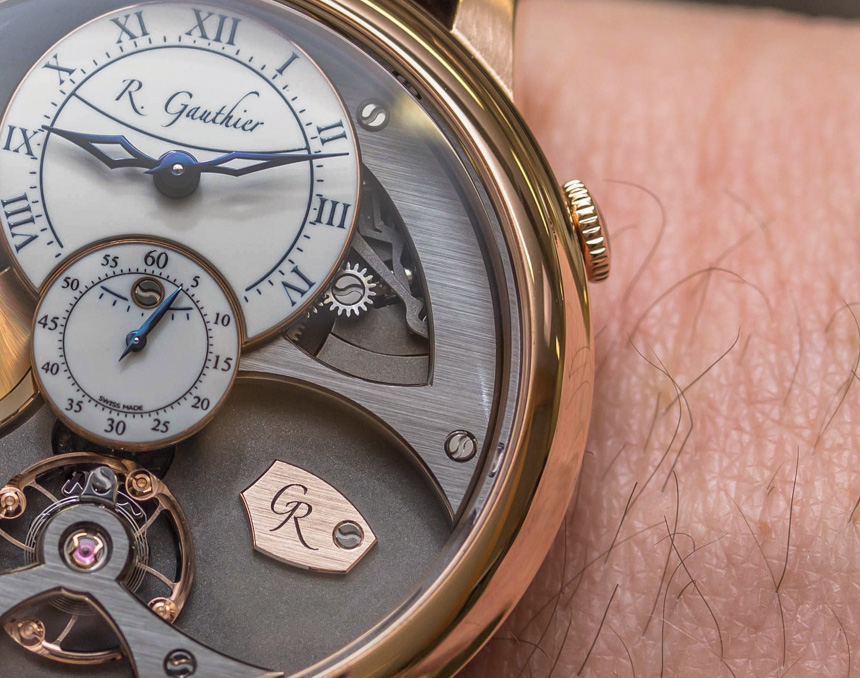 The case has alternate finishes. The bezel and case sides are mirror polished while the tops of the lugs are satin finished. The crown is positioned at 2 o’clock and is a little hard to operate because it is so thin and hard to grip. Water resistance is 50m, which is commendable given that most haute horology watches usually come with pitiful water resistance. At 50m, this means you can wash your hands comfortably without worrying about a little water getting on the watch. 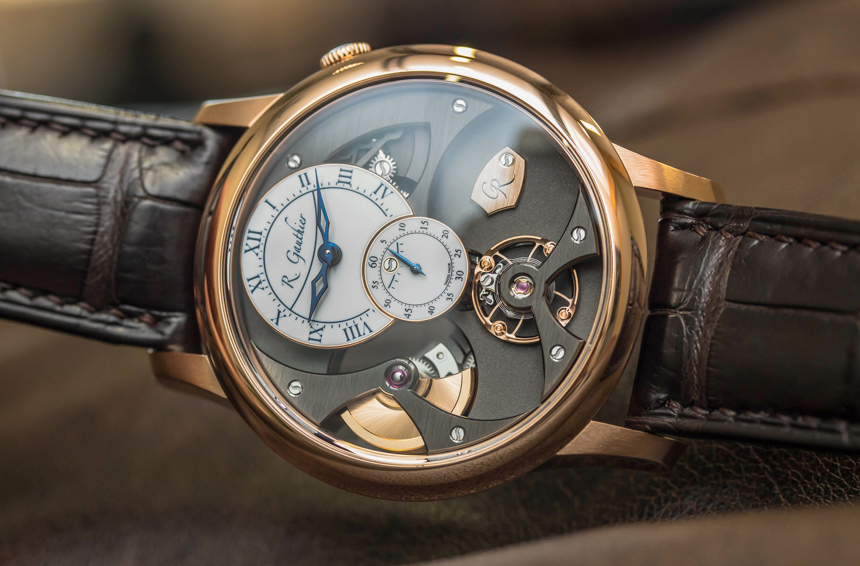 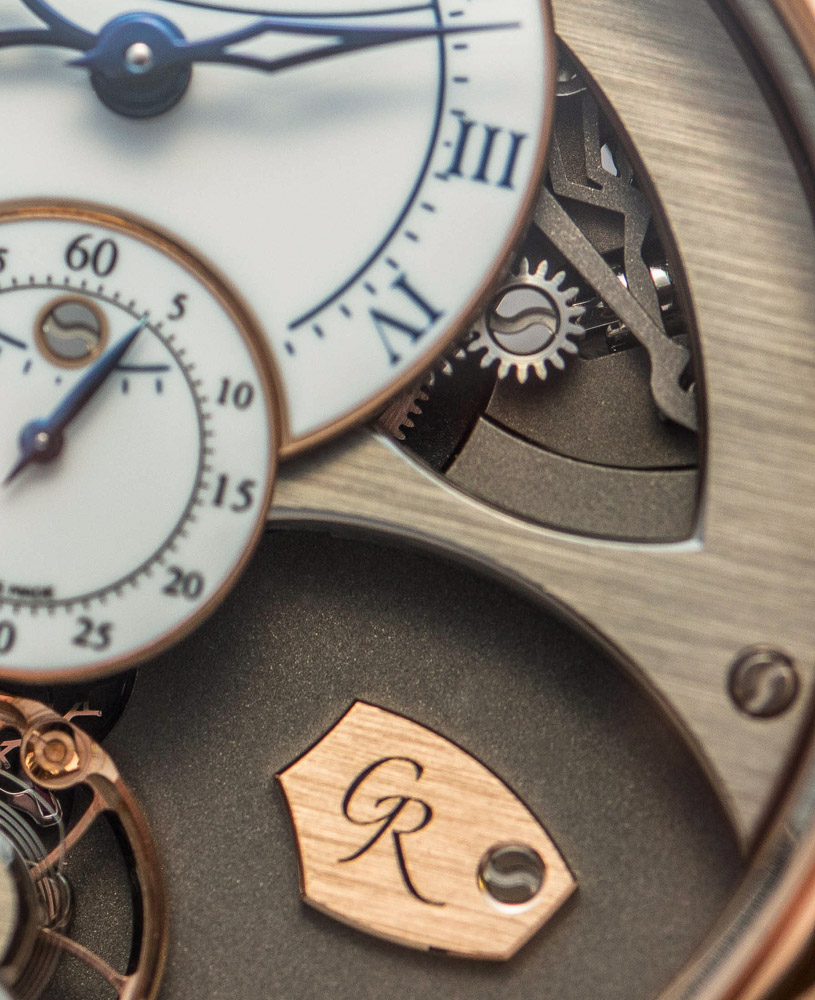 The magic, however, is all on the dial. The name Insight comes from Gauthier’s desire to give owners full view of the mechanics and finishing of the watch. He has certainly succeeded. At 12 o’clock, you have a large enamel dial and skeletonized hands that show the hours and minutes. Just below it, you have a smaller enamel dial that shows the running seconds. The dials overlap slightly, but legibility is never an issue. One thing that I would like to point out, however, is that the hour and minute dial has Roman numerals for the hour makers, whereas the sub seconds dial uses Arabic numerals to mark out every five seconds. This inconsistency might irk some readers, but at least the dial is expertly printed and the numerals, even under a macro camera lens, are razor sharp. 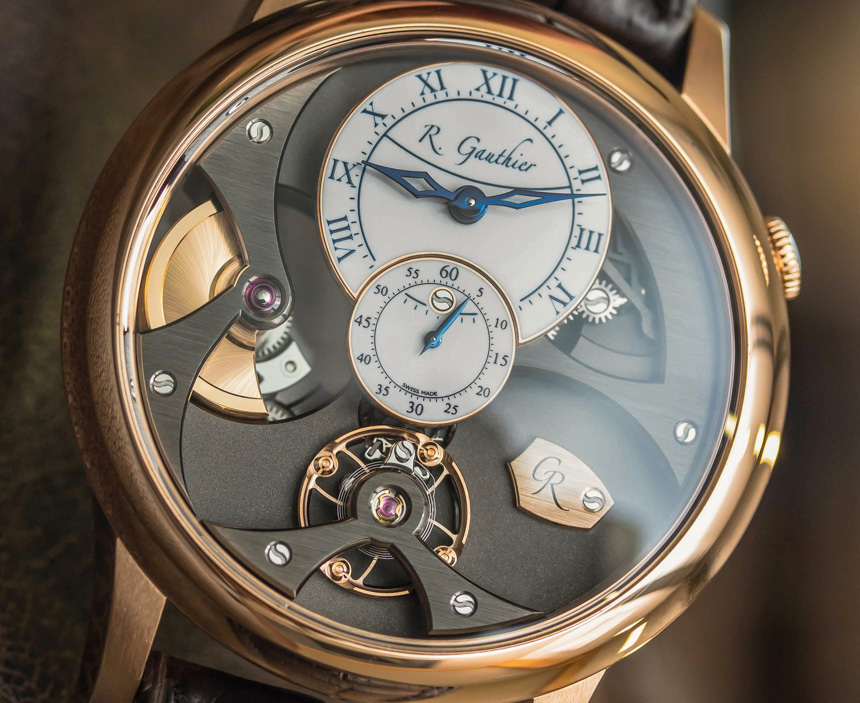 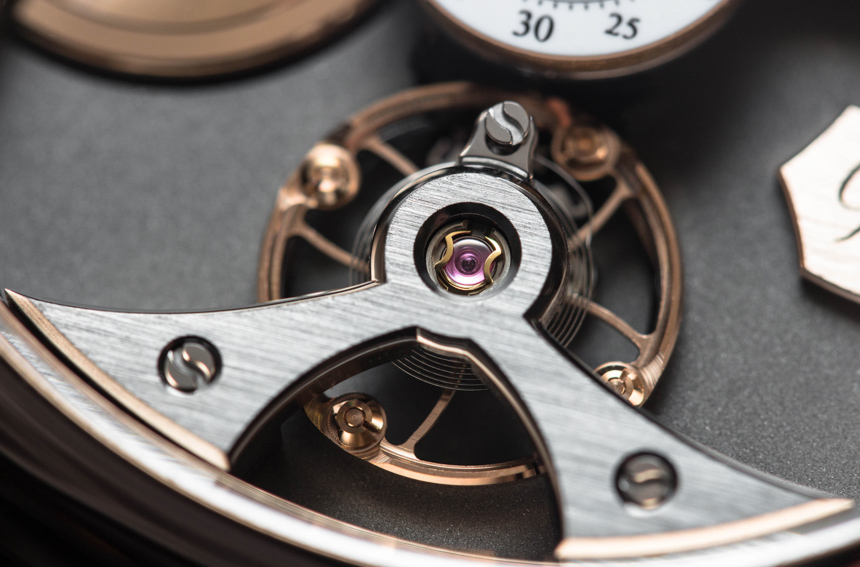 Right below the subsidiary seconds is the balance wheel, which is held in place by an attractively shaped balance bridge. The balance uses eccentric weights for adjustments and the balance bridge is incredibly finished with sharply beveled edges. Note also the screws that hold it in place. The Romain Gauthier Insight Micro-Rotor uses these unique screws with “S” shaped grooves, which is a clear sign of the lengths that Gauthier goes to ensure that his movements are one-of-a-kind and inimitable. It also means that servicing in the future will likely have to go through Romain Gauthier as I don’t think third-party watchmakers will have the appropriate tools to remove the screws. 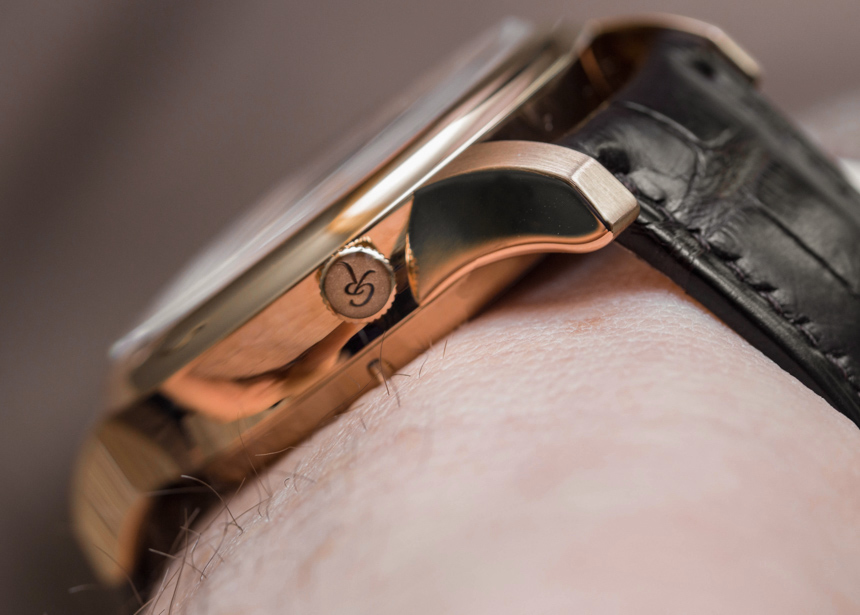 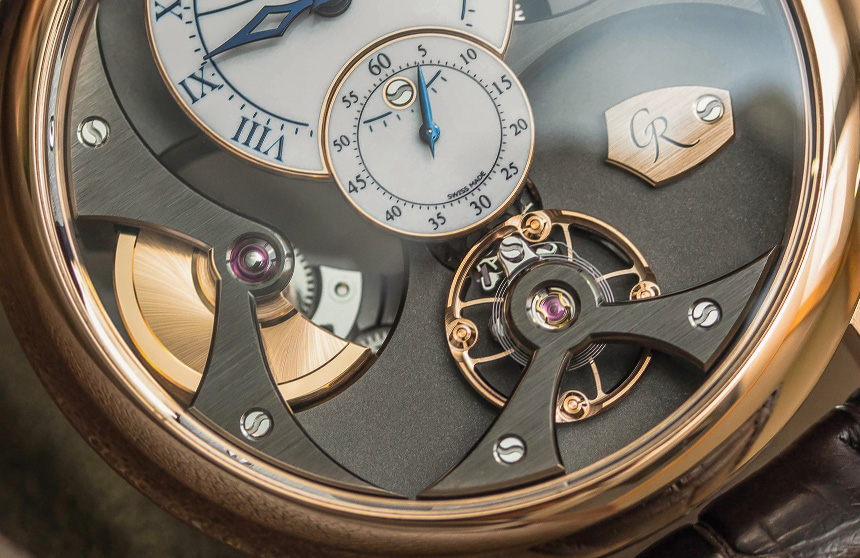 To the left of the dial at 9 o’clock, you have the bi-directional swinging micro-rotor, which is made out of 22k solid gold and held in place by bridges on both sides. The use of gold – a relatively heavy metal – ensures winding efficiency despite the smaller mass. Again, the level of finishing here is outstanding. The bridge features impressive bevels and the jewels sit in a polished and beveled countersink. Likewise, the rotor features different finishes. It has circular graining on the inside, mirror polished edges, and it is beveled as well. 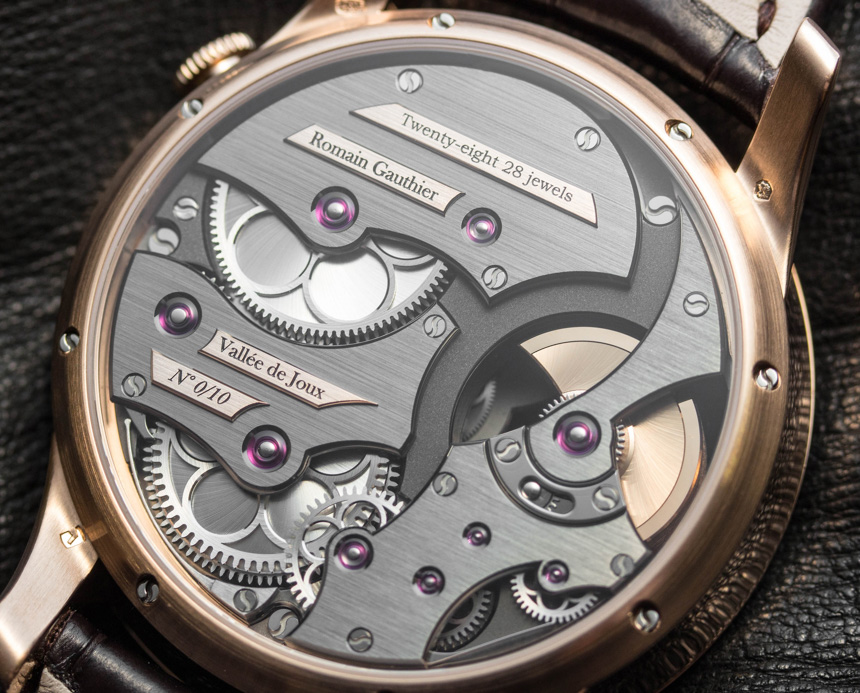 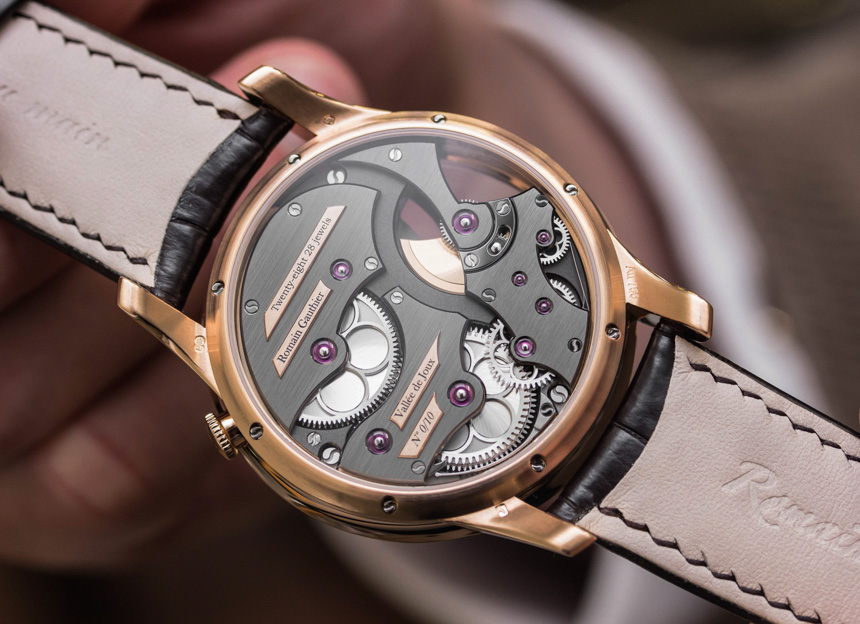 In fact, the entire movement is hand finished to a very high degree. The movement is visible through the sapphire display caseback and the organic shapes of the bridges and plates allow Gauthier to show off a full range of different finishing techniques. The red gold case models have an NAC-treated movement, which gives them a darker hue. In addition, the bridges and plates on the red gold models have a brushed horizontal finish. The platinum models, on the other hand, have palladium-treated bridges and main plates which have a shimmering frosted finish. 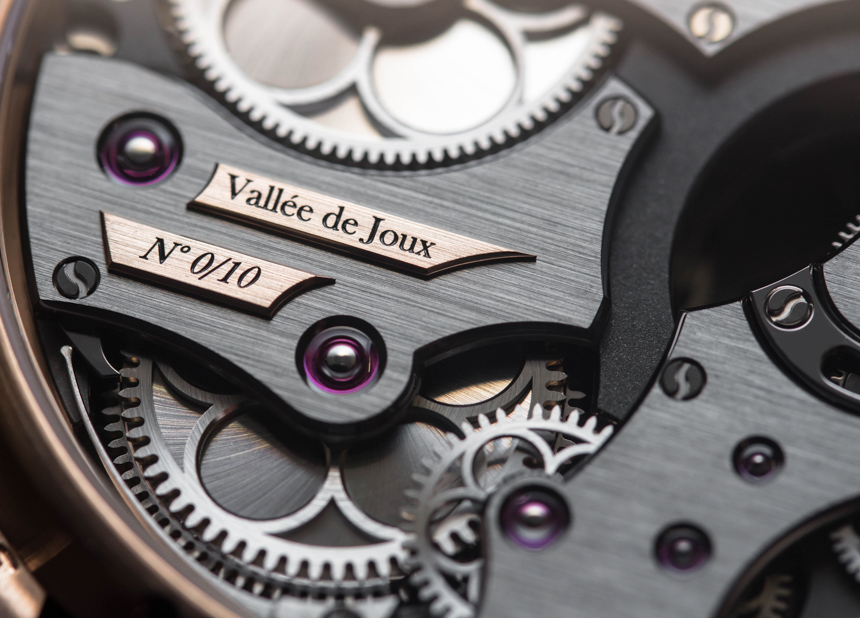 In total, the Insight Micro-Rotor’s caliber features 206 components and 28 jewels. It beats at 4Hz and has twin mainspring barrels arranged in series for more consistent power delivery. Total power reserve is 80 hours and that means you can take off your watch on Friday evening and still have it running on Monday morning. It might sound trite, but this is a feature that a good number of readers actually appreciate. 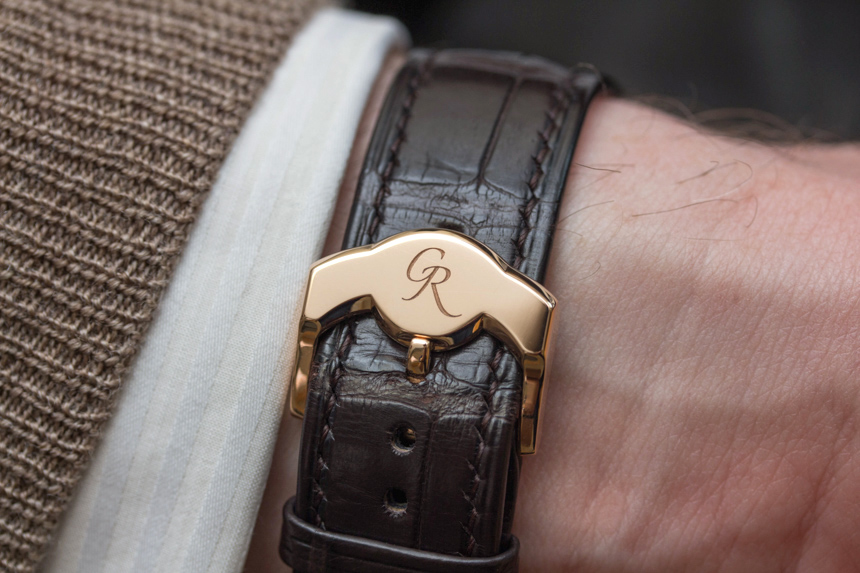 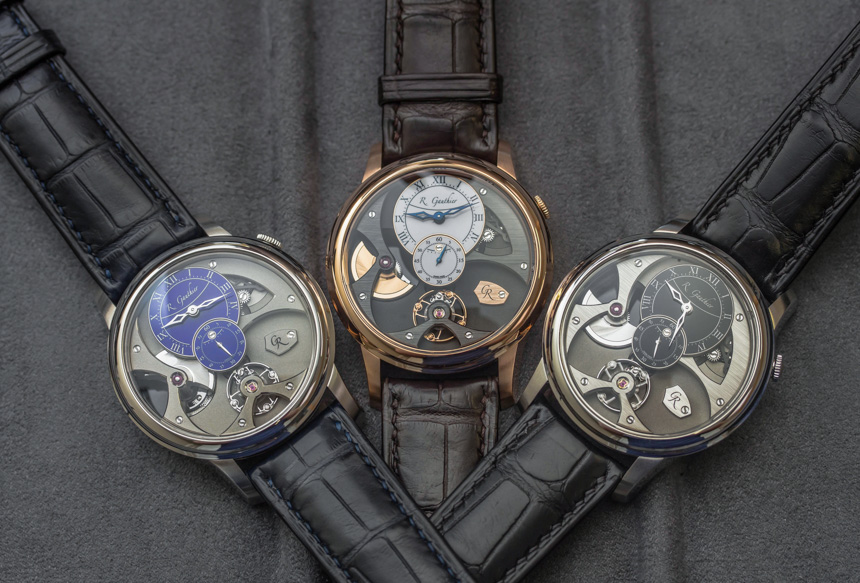 I have mentioned a couple of times in the past that haute horology isn’t just about complication. It is about the philosophy, concept, and treatment of a watch. And even though the Insight Micro-Rotor looks simple and doesn’t boast any groundbreaking or complex complication, it is still a watch that takes a great deal of effort to craft and a good understanding of watchmaking to appreciate. The level of finishing on this piece is very high and I suspect its lucky owners will often find themselves mesmerized by the finishes of the watch when checking the time. The Romain Gauthier Insight Micro-Rotor is limited to 30 pieces in rose gold and 30 pieces in platinum, and is priced at 75,000 CHF and 88,000 CHF respectively. romaingauthier.com