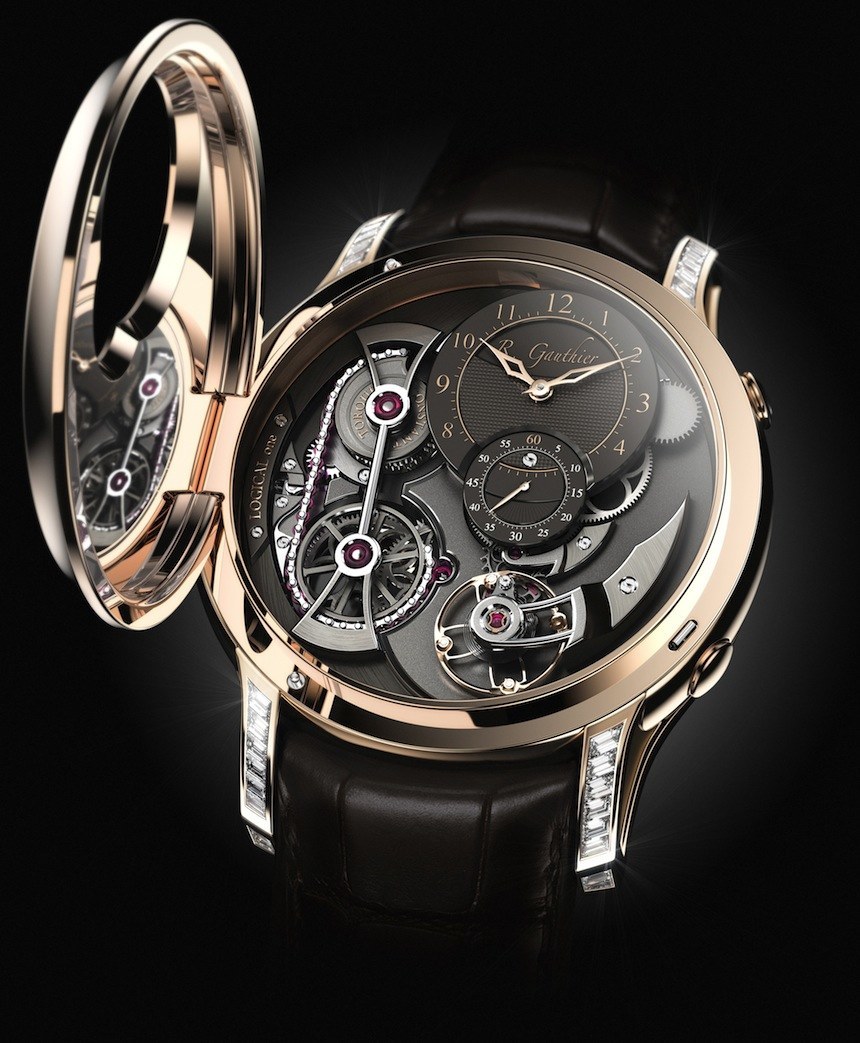 Romain Gauthier Logical One Secret Is Not So Logical After All

A bit over a year ago Romain Gauthier (R. Gauthier) released the Logical One, his most complicated and most expensive watch thus far. In fact, it was so extraordinary that it went on to win the prize for the Best Men’s Complications Watch at the 2013 Grand Prix d’Horlogerie de Genève, defeating pieces from Greubel Forsey, Hublot, Montblanc and others. When a brand – regardless if its a smaller independent, or a major manufacture – creates such a complicated and special piece, they generally try and plan different future versions of it in advance, at the time when only the base concept is being created. This is understandable as it takes several years to develop such a caliber and it is only profitable if it lives through different iterations. The Logical One is likely no exception, as one year after its debut the brand just announced an interesting new version of it, called the Secret. 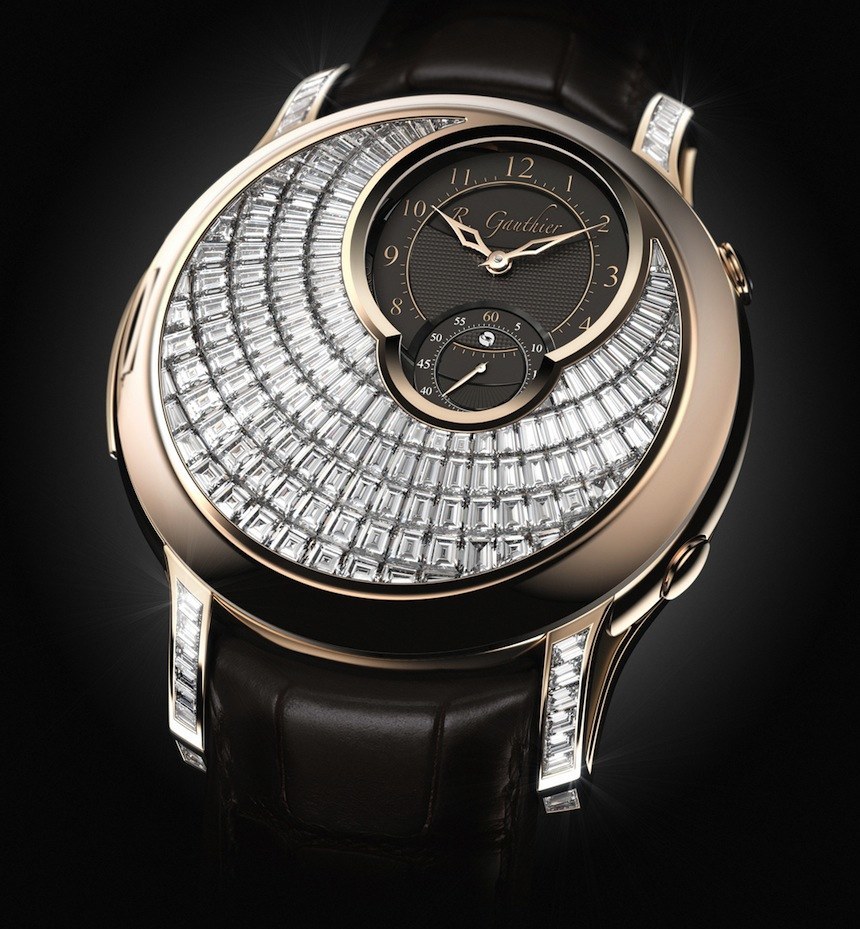 The greatest–and most obvious–difference that the Logical One Secret offers over its predecessor is the diamond set lid that covers the entire face with the exception of its subdials. The lid and the lugs were invisibly set with 181 baguette diamonds, or a total of nearly 7 carats, all in an effort of hiding the masterful movement underneath. To get a more detailed explanation of the movement itself, check out Ariel’s take on the original piece from when it debuted early last year.

In short, the trademark complication of the Logical One is not a chronograph or a clever calendar mechanism– it lacks any of that fancy (and increasingly ubiquitous) stuff, as the only indication it provides is for the hours, minutes and seconds. Instead, the movement and all its 394 components were designed to serve one goal: consistent (and consequently superior) accuracy throughout the watch’s 60 hour power reserve, a goal that is achieved with a centuries old device called the fusee and chain. 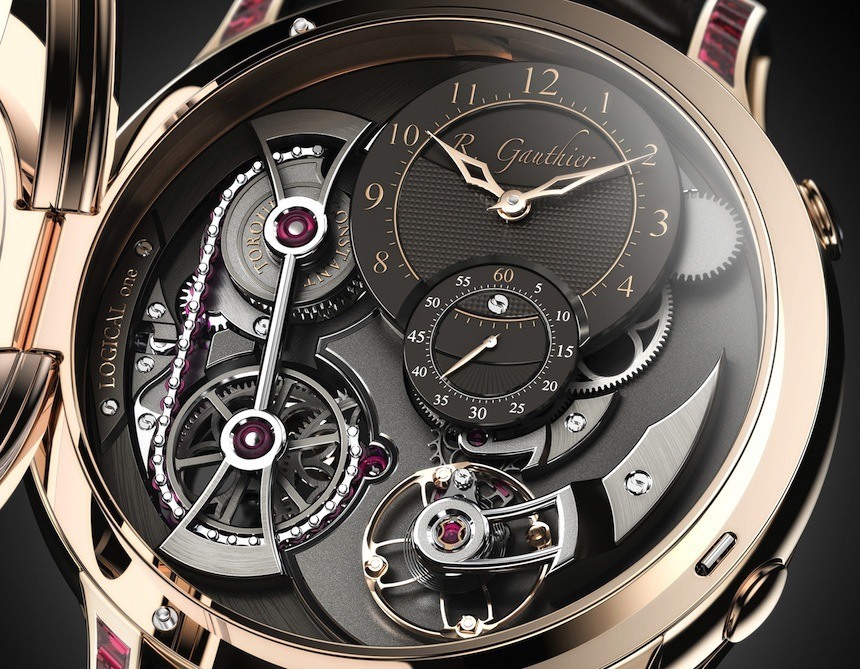 Seen to the left of the movement on the image above, the fusee and chain is used to compensate for the loss of torque as the mainspring nears the end of its power reserve. It consists of three main components which are a snail (seen in the top left), a wheel seen in the bottom left corner, and a tiny “bicycle-chain” in between. To begin with, the chain in itself is unique to the Logical One, as it the microscopic parts are held together by synthetic rubies, offering lower friction and lubricant-free functioning.

On an interesting note, the fusée (as it is originally written) is a component that looks and essentially functions the same as the cassette on a mountain bike: the differently sized cogs are matched to a different amount of torque and it is through this change in gearing how the traditional fusee and chain compensates for the variations in the mainspring’s torque. The reason why Gauthier’s version is unique is because he substituted the tall fusee with a flat snail cam. So in reality this watch is not even a fusee and chain anymore, its a snail cam and chain – which just does not sound that pompous anymore.

But worry not, as every bit of lost splendor is recovered by baguette diamond set cover in solid red gold. Fixed to the case with a hinge at the 9 o’clock position and operated by a push button at 4, the lid pops open and reveals the Logical One movement exactly as seen in its award-winning predecessor. Having the ability to disguise the movement – undoubtedly the most valuable part of any haute horlogerie timepiece – is one that has long fascinated many high-end manufactures. Referred to as “stealth wealth,” even in an age when wealth is often shown off in an as in-your-face way as possible, there are some who prefer to have it shared exclusively among their peers. Most all tourbillon pieces by Patek Philippe, some ultra-complicated A. Lange & Söhne models and a handful others spring to mind when it comes to brands who have been consistently offering watches that have sublimely complex movements hidden by a solid dial– and at times even by a solid case back!

And it is here where I feel the Logical One Secret misses out: it has one of the most amazing movements among independent brands and one that rightfully snatched a prestigious award from some extremely strong competitors. So far so good, and the idea to (rather ironically) hide it away from peering eyes by using a clever lid is also a very cool idea. So what is the problem?  I am sure these diamond set pieces will be fondly loved by those who thought that the original piece lacked a bit of “bling,” or are just fans of the ever-lasting beauty of precious stones, and yes, the lid-idea is again, very cool. However, it actually is due to the excessive use of diamonds that the entire concept of “stealth-wealth” is shattered. There is hardly anything flashier on a watch than diamonds – and especially 181 one of them. 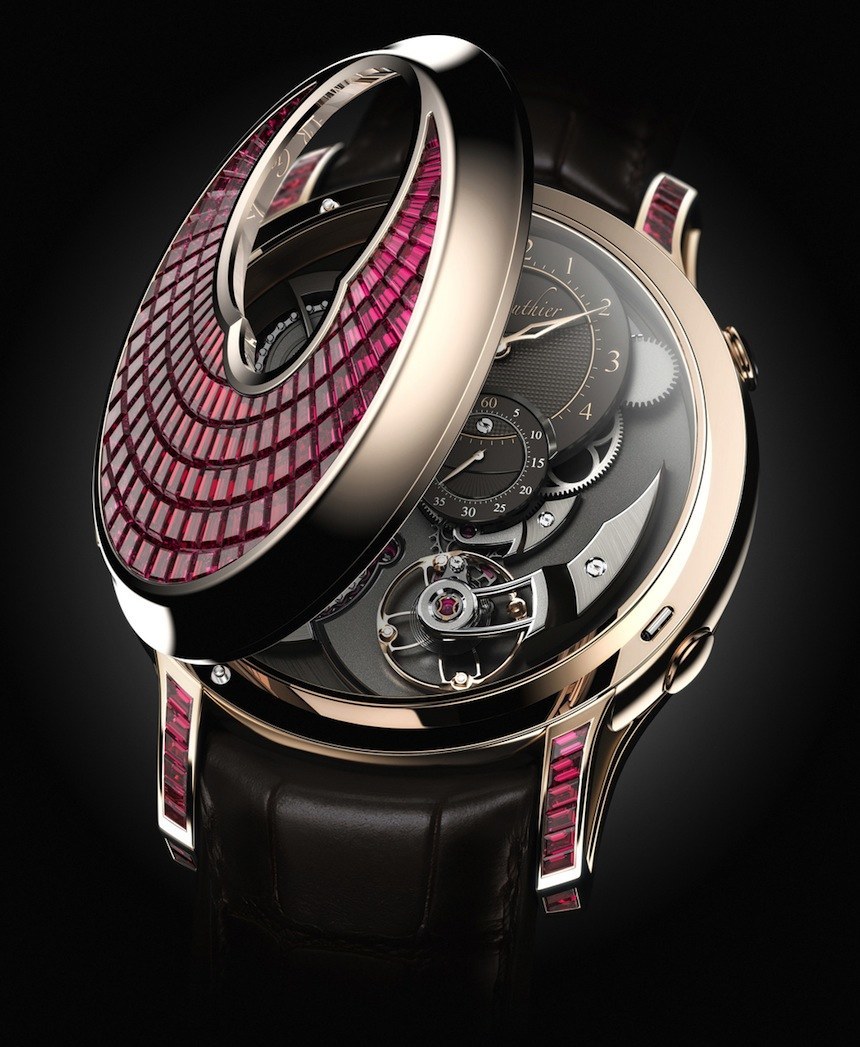 So why not offer a Logical One Secret with a solid red gold cover without any diamonds along with these two bejeweled versions? It would highlight the splendid proportions of the dials and the case while also disguising one of the coolest movements that are presently available– without reaching truly stratospheric price points, that is. As I see it, with a solid, non-bejeweled cover the Logical One Secret could possibly be one of the most refined dress watches presently available as it would have the restrained, dare I say stealthy looks paired with a unique exercise in high-end movement design.

Of course, there will always be a market for expertly diamond-set watches and I cannot see why the Logical One Secret would not be a successful one among them in its own way. But at the same time what I also see is a slightly missed opportunity to create a truly elegant iteration of a superb concept, something that would make for one of the strongest packages among today’s most luxurious dress watches. romaingauthier.com