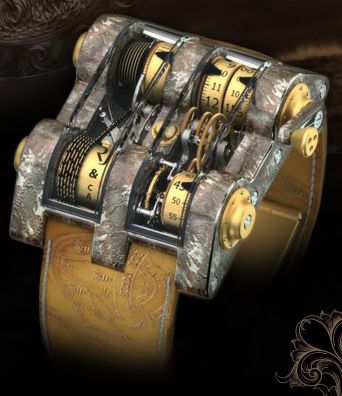 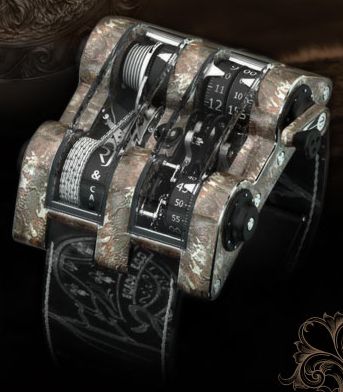 The machine you see before you represents a new offering from Romain Jerome, which looks amazing with their special treatment, although its creation cannot be credited to them. In fact the Cabestan vertical tourbillon watch was a collaborative effort between master watch makers Vianney Halter and Jean-FranÃ§ois Ruchonnet. The Cabestan was offered through the Vianney Halter brand as a $220,000 watch “novelty.”

In my opinion, the watch at that time was not done justice. It was perhaps the cost combined with the limited function that turned people off to it, and it was marketed almost as a futuristic piece, rather than one of the past. The complexity of the watch allowed for limited production, though visually it was intriguing to watch operated (a fact not easily communicated by mere pictures). Part of this had to do with the fact that it was a vertically set movement rather than the more traditional horizontal approach. Use of a series of barrels allows for the movement to operate, and the time to be indicated. The tourbillon was also of course placed in an unorthodox vertical placement. Today the Concord C1 tourbillon is another watch that uses a vertical placement for its tourbillon balance wheel.

The Cabestan uses what is known as a fusee chain as part of the escapement. This miniature bicycle chain wraps around the barrel with the main spring and slowly uncurls to release power into the movement. Winding the watch with the formidable looking crank pulls the chain back into place and winds the main spring. It is a pretty cool operation to watch, and reminds me the system on old ships where sailors had to wind a large wheel to pull up the anchor. The original Cabestan watch was a bit of a bore in my opinion, at least visually. As though the watch remains unfinished, it lacks a lot of aesthetic appeal. The operation of the device is likely to be genius, but that does not mean I want it on my wrist, especially for the extremely high price. Then comes Romain Jerome with their special methods of making watches look like parts of antiquity, and the result of the treatment is a great looking watch machine that appears to be a out of mythical history.

The six different versions of the Roman Jerome Cabestan Titanic DNA Vertical Tourbillon watch are the; Pacifique, Artique, Atlantique, Indien, Austral, and 41° 43’ 55’’ N, 49° 56’ 45’’ W. The differences in each are purely aesthetic, and have a different theme. Homages to different oceans, Greek nautical or celestial gods, as well as the longitude and latitude points at which there was a tragic ship wreck, the Titanic of course. The watch measures 46mm X 36mm X 15mm, while the caliber is the manual-wind CL001.1RJ.

The aged look of these watches give some of them gothic appeal, and a timelessness. I mention the nostalgia of alchemy, because the watch surely touches on the intersection of technology of mysticism. You could also view Romain Jerome’s transformation of the Cabestan as looking like a quasi-torture instrument, but it really only hurts the wallet as they are pretty fun to look at. Romain Jerome is getting really adept at the “weathered” look. They also call it the oxidized look. Overall, it is meant to emulate the looks of metal that has been submerged in the salt watery depths for ages.

I admit, there is a large degree of mystery and intrigue to what lays beneath the sea. There is a romantic quality to these watches in presenting an imagery that each arose from a different ocean, ready to operate again telling the time in a unique manner. While these watches merely show the minute, hour, seconds, and power reserve (72 hours manually wound), there is a lot to be said about watching the intricate movement perform its duties on your wrist and the fusee chain slowly grasp and expend the movement.

These watches ought to be hard to get, but Romain Jerome is getting more and more popular. Watch for more mainstream watches to come out of their shop too, along with other potential interesting watch partnerships.