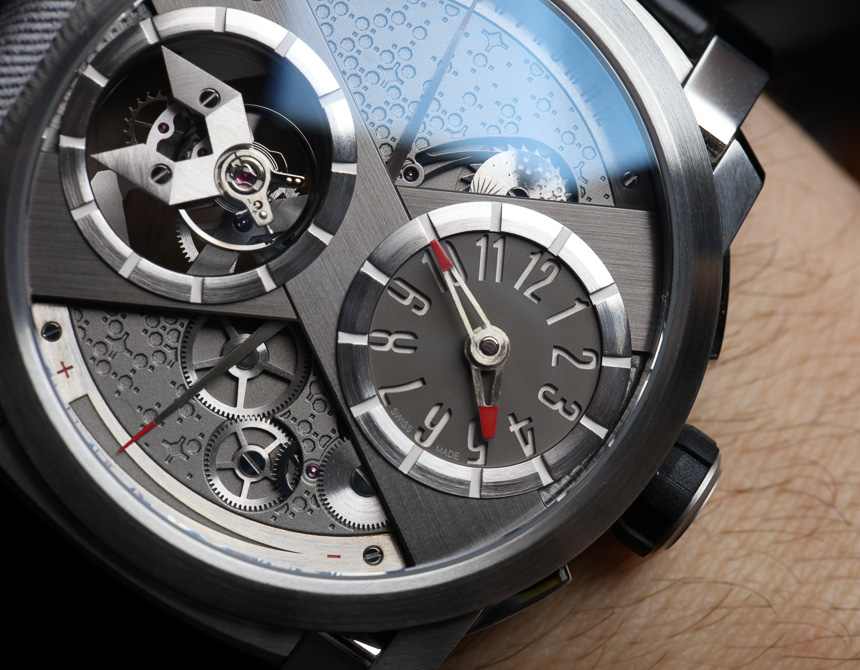 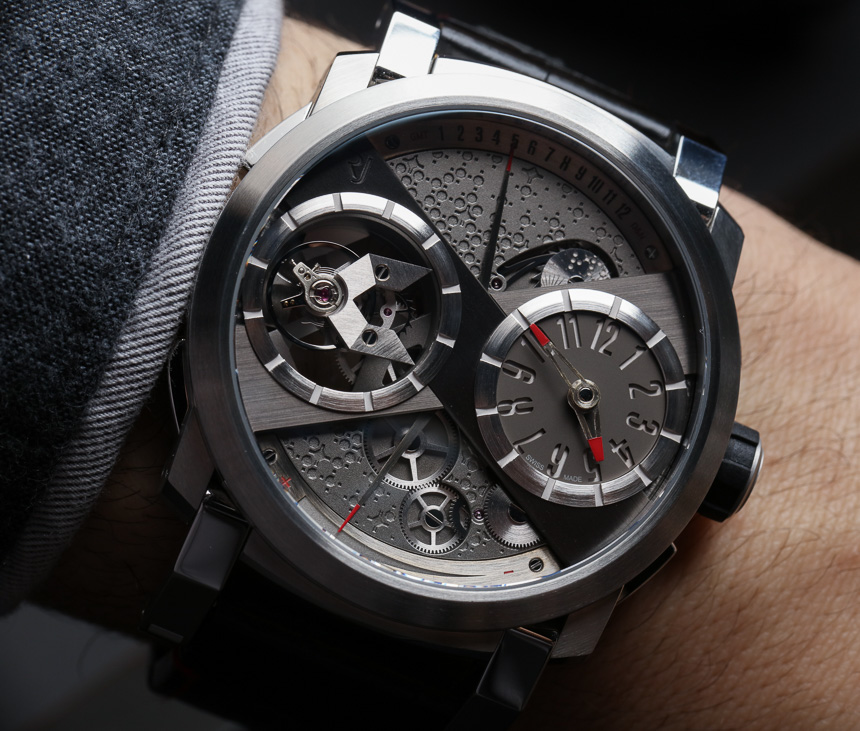 In 2013, Romain Jerome debuted the original limited edition Moon Orbiter Tourbillon watch (hands-on here) which was meant as a space- or spaceship-themed watch that looked like nothing else out there. With an unusual, horizontally wide case shape, the original was certainly visually and technically interesting, and I am sure it resonated well with collectors. Romain Jerome limited production to just 25 pieces – and I thought they could have done pretty well selling more of the $100,000-plus exotic timepieces. 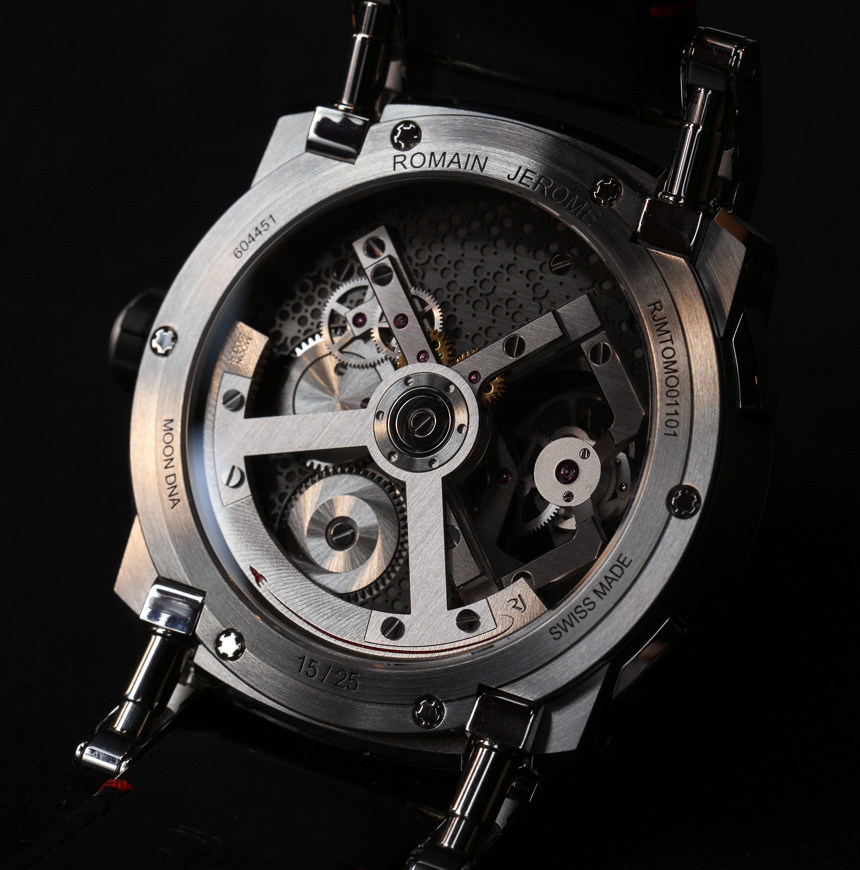 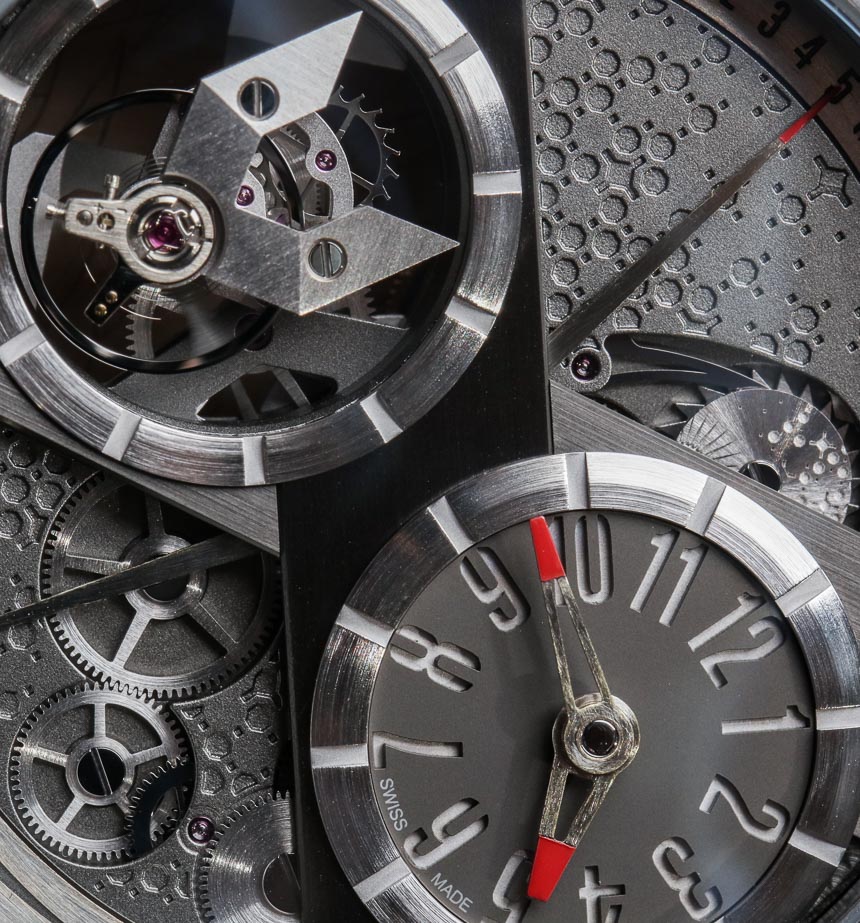 Personally, I like this new iteration of the Romain Jerome Moon Orbiter Tourbillon a lot. It feels more wearable – despite the large case size – and even though the round case is more traditional in appearance, it suits the space theme of the Moon Orbiter a lot more. Detailing and execution are very nice, as this is the type of top-tier Romain Jerome timepiece collectors should be looking for among the brand’s new releases. 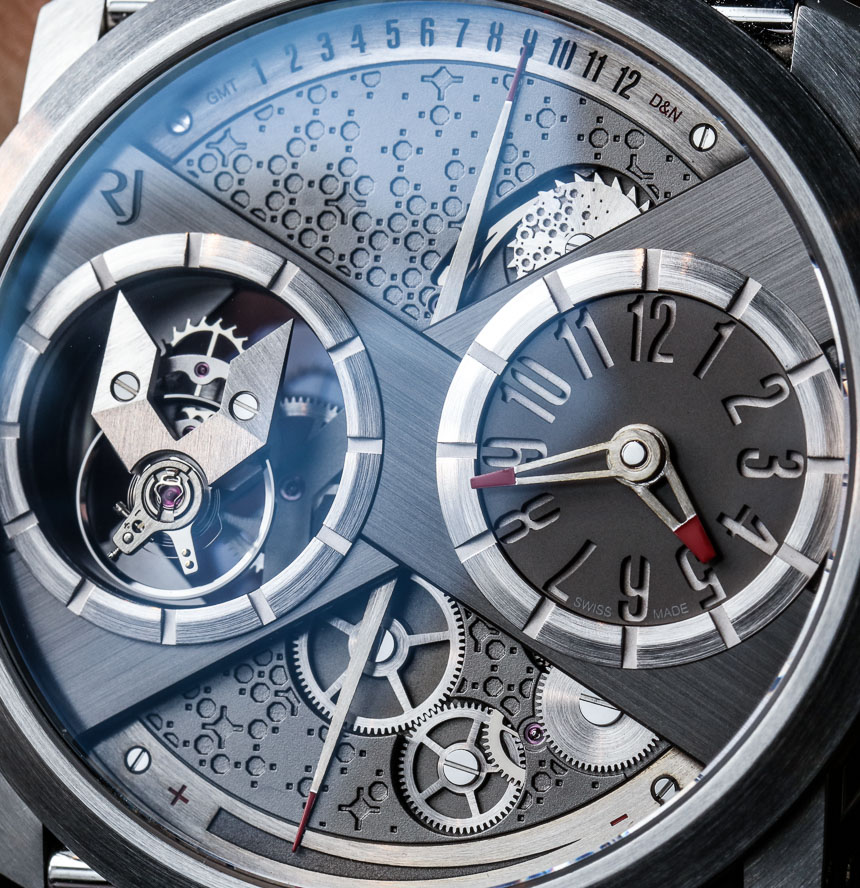 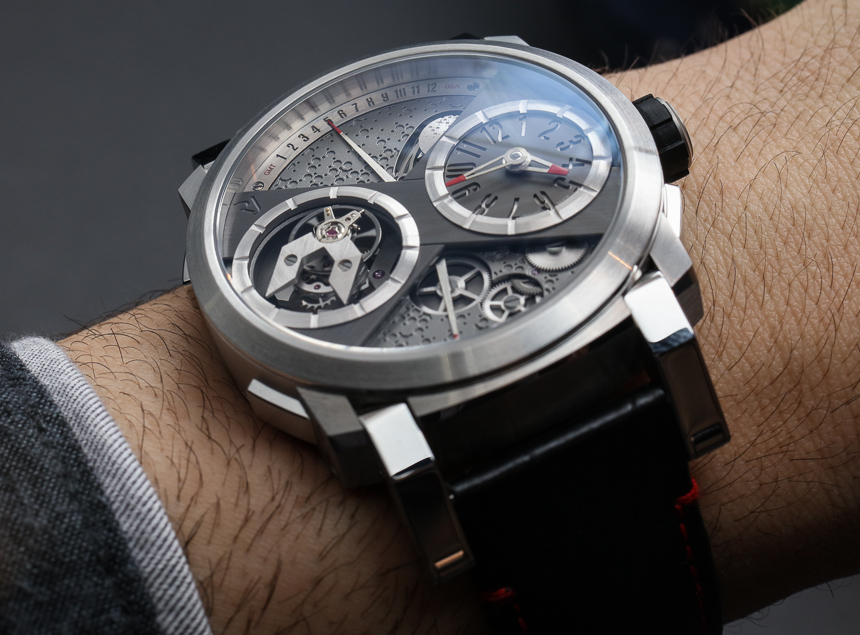 In steel (apparently with some small metal pieces of the NASA Apollo 11 spacecraft), the Romain Jerome Moon Orbiter GMT is 48mm wide and designed with the same “hydraulic-style” spring-loaded lug system as the original Romain Jerome Moon Orbiter Tourbillon. This means that the lugs are spring-loaded and articulate  a bit in order to allow for a comfortable fit on the wrist. I feel that the system works well here, and is a concept you can see in other Romain Jerome “Moon” watches from over the years.

Part of the “X axis” on the dial which extends to the side of the case is a hidden pusher meant to adjust the retrograde GMT (second time zone hand). This is the pusher at about 2 o’clock, and it serves to include an additional complication to the original Romain Jerome Moon Orbiter Tourbillon movement which, in addition to having a wide-diameter tourbillon, includes and off-centered dial for the time as well as a handy power reserve indicator at the bottom of the dial. Legibility is strong and the opposing GMT and power reserve indicator hands make for a nice sense of balance and symmetry on the dial. 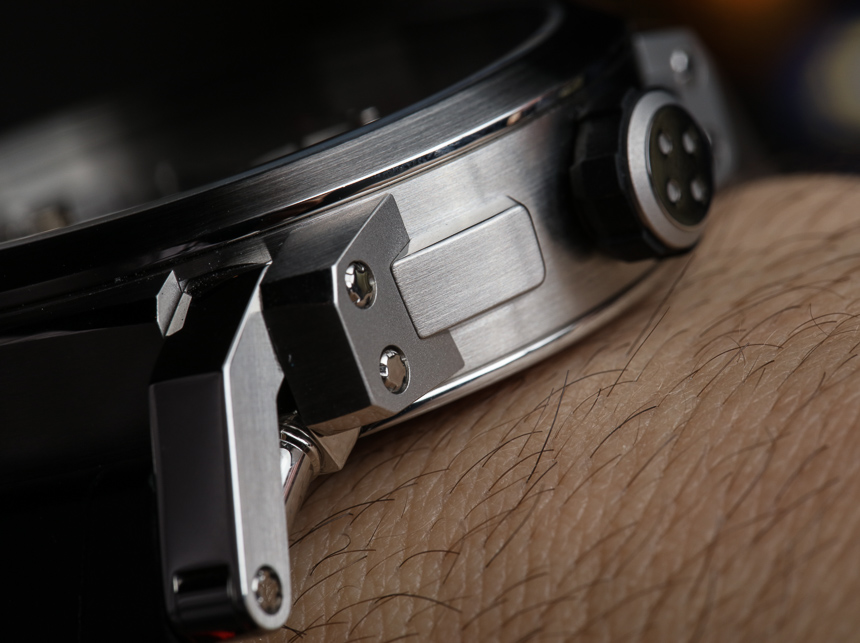 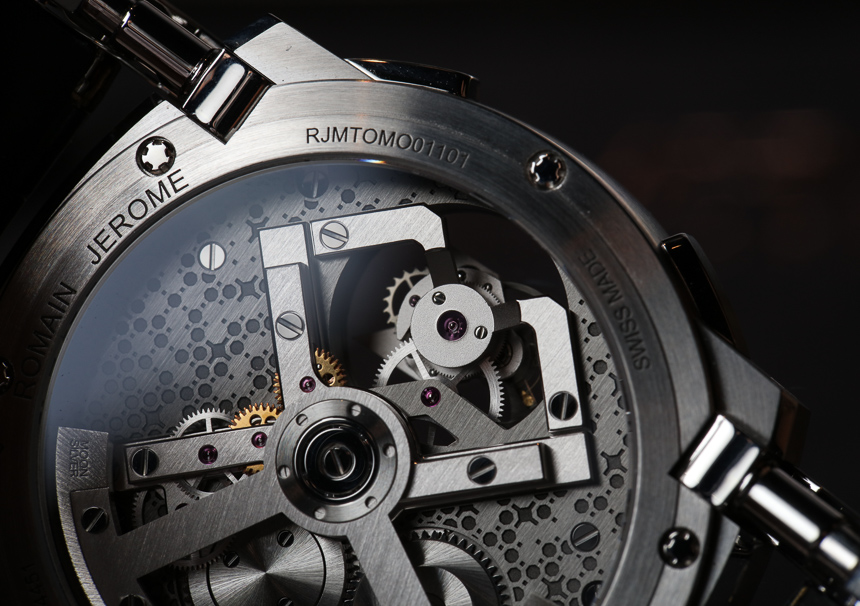 The movement – produced by La Joux-Perret for Romain Jerome – is the caliber RJ7813L. Operating at 4Hz (28,800bph) with a power reserve of 45 hours, the movement has some light skeletonization and is the type of custom and artistic mechanism you can expect for prices like this. Note details like the handy AM/PM (day/night) disc in the GMT indicator area. Excellent dial depth and finishing textures help round out this spacey and exotic high-end novelty timepiece. 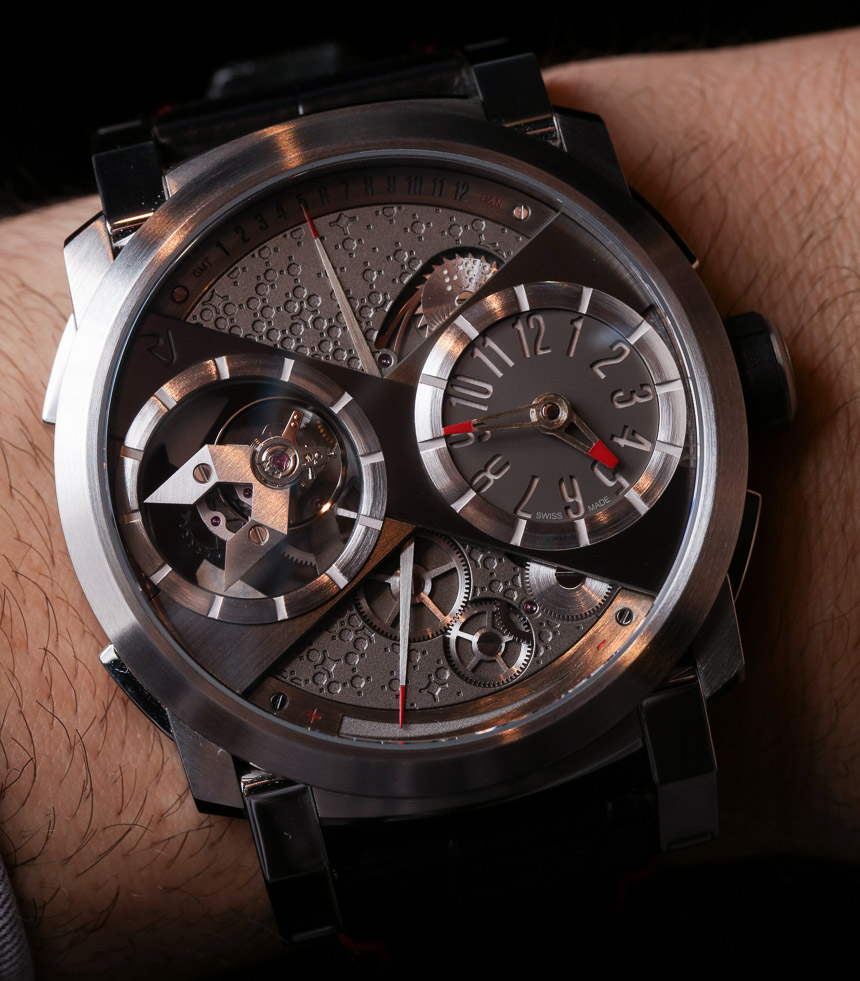