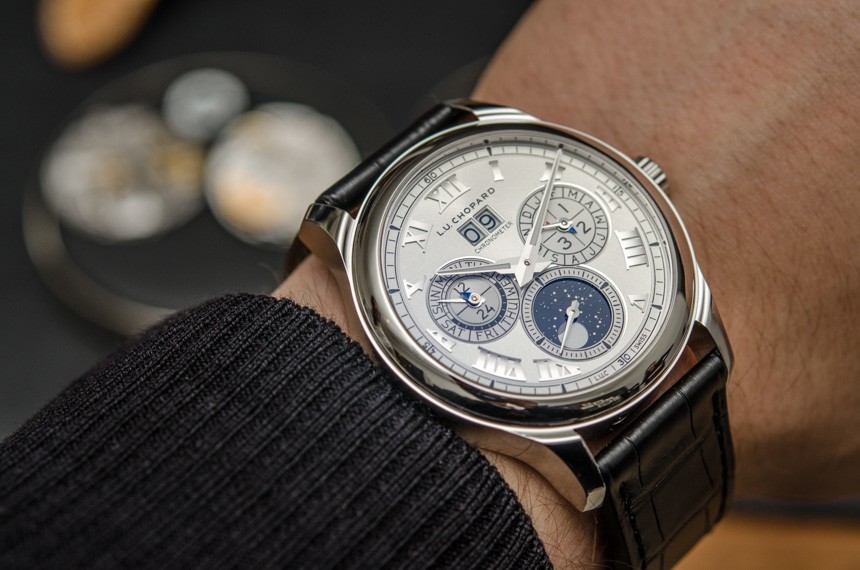 SalonQP 2014: An Ever-Personal Encounter With The World Of Horology Montblanc brought a balance wheel specialist to the fair, a lady who works exclusively on the balance wheel and spring assembly in Villeret. Unlike the wider range of Montblanc watches, the higher-end pieces with Villeret movements receive uniquely crafted, shall we say bespoke, balance wheel assemblies, where the spring and the wheel are poised individually and also together, for that added touch of fine watchmaking – and presumably enhanced timekeeping performance. And while the physics and the minuscule details of this job are very complicated – otherwise it would hardly necessitate the work of a specialist – visitors could nonetheless acquire a more thorough appreciation for the amount of time and work that goes into the creation of just a handful of components found in a high-end movement. Finished watches from independents included the quite astonishing Andreas Strehler Sauterelle à Lune Perpétuelle, which debuted at SalonQP. The fancy name sounds more assuming than the watch’s restrained looks – but don’t let that fool you. This second addition to Strehler’s Sauterelle line contains the remontoir d’egalité (constant force) device at the 11 o’clock position, but the real deal is to be found behind the phase of the moon indication. As per Strehler’s claims, this moon phase indication has to be adjusted by one day every two million (2,000,000) years, despite the fact that it relies on just four moving parts – making it quite possibly the most accurate mechanical moon phase indication ever created. Among exhibiting high-end independents was Hungarian watchmaker Bexei, who brought the Primus Triple-Axis Tourbillon and a more restrained Dignitas model to the show. It is always interesting to see the greater audience’s approach towards these “horological underdogs”, and see their reactions towards such levels of quality in finishing and execution. As is usually the case with most of the very finest independent watchmakers today, their work is restricted to the virtual bounds of the internet and, of course, to the much stricter limits of private collections. Once in a while, these creations do find their way out and to the public, allowing the audience to educate themselves about the finer details present only in the works of master craftsmen. At shows like these, it also happens that we are given a sneak-peak at what can be expected to come from major and smaller brands alike by the timepieces being referred to as prototypes. This year, AkriviA’s watchmaker Rexhep brought the secretive nature of Swiss watch making to another level, with the hilarious sticker on the back of its latest watch, saying Proto and adding a smiley that is of course not quite on par with high-end movement finishing standards. This little “detail” did surprise and amuse me quite a bit when I first turned this new-for-2015 prototype around to look at its movement.

Last year, we wrote about the Monopusher Tourbillon (hands-on here), and while the unique case design remains, the movement is new, in that it ditched the monopusher chronograph for a jumping hour mechanism with a hammer and gong striking for every hour that passes – it can be turned on or off with the pusher above the crown. Being a prototype, the aperture for the hour is not final and the dial bears dozens of different shades of blue and purple, serving as an experimental piece and showing the different hues that can be achieved. It was a fun experience seeing something so much in a state of progress and I hope to see the finished movement at Baselworld – without a sticker at that time. In conclusion, the three-day long exhibition of SalonQP remains a splendid opportunity for watch enthusiasts – regardless of the level of their expertise and involvement – to personally acquaint themselves with some of the finest creations of the watch industry, as well as some of its indispensable crafts. I hope that in 2015, an even larger group of visitors will gather and experience this direct insight into the wonderful and challenging world of horology, as SalonQP really is an occasion where you get to do that. salonqp.com