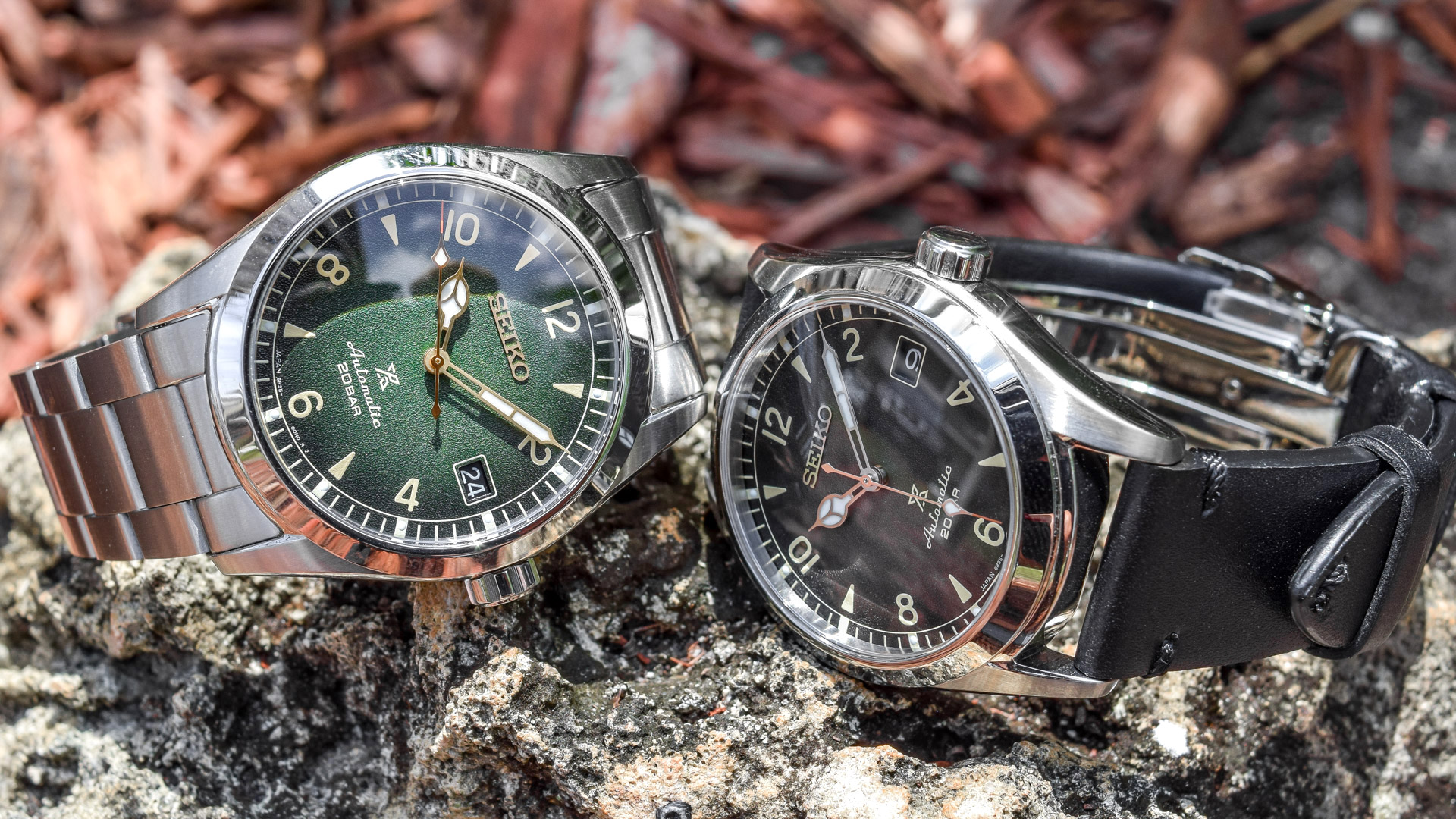 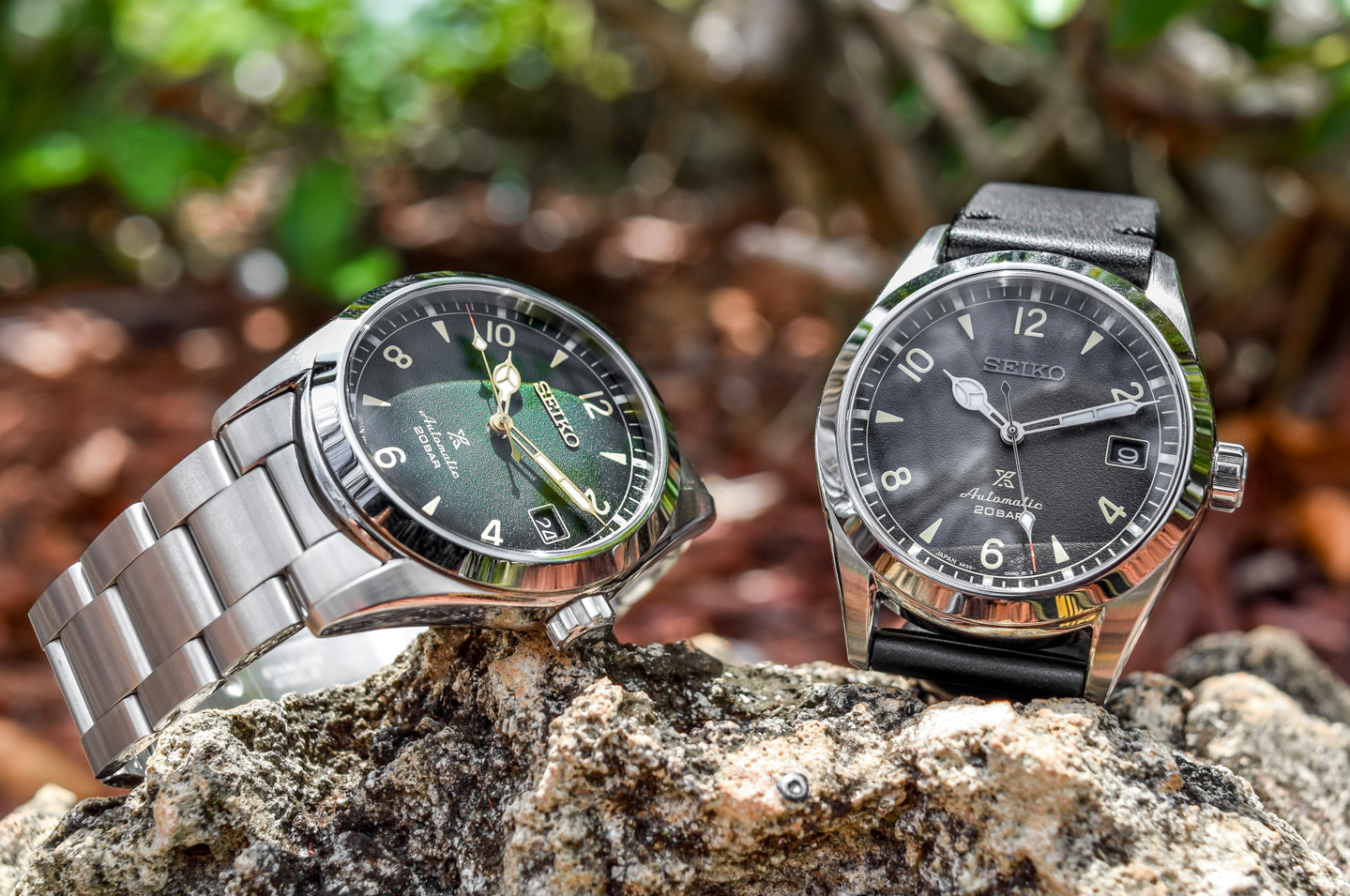 For the majority of enthusiasts, Seiko will forever be associated with affordable, charmingly nicknamed dive watches, including the Turtle, Tuna, and Samurai, just to name a few. But the revered Japanese brand also has a long history of producing capable field watches under the Alpinist banner dating back to 1959, indeed before Seiko had so much as dipped a fin into the proverbial and frigid dive-watch waters. And for Alpinist nerds in the modern era, the SARB017 and its heir apparent, the SPB121, stand together as the purest expression of the design formula, exemplified by a green dial, internal rotating compass bezel with its additional crown, and a polarizing cyclops magnifier over the date. 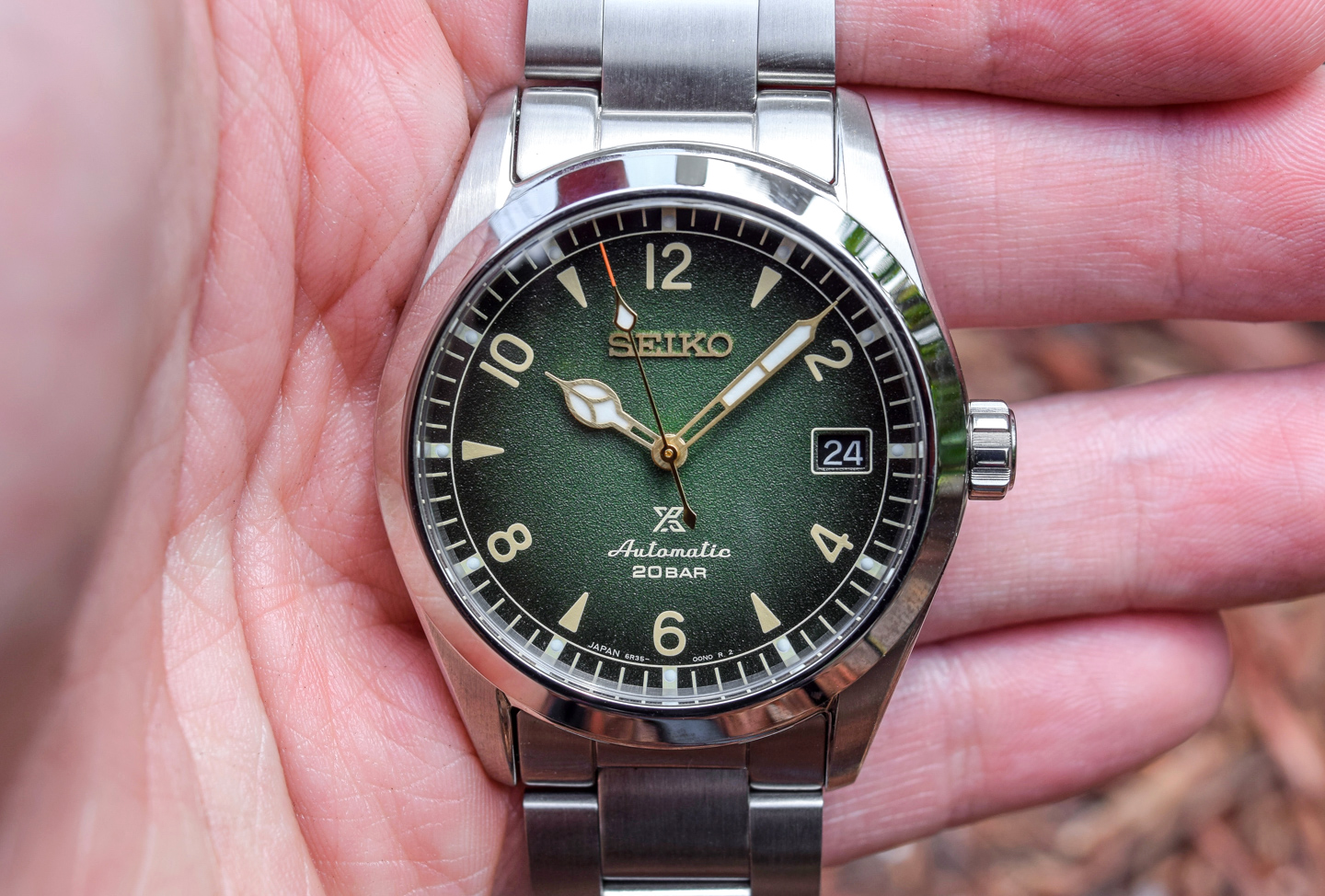 However, in 2020, Seiko did something unexpected in its refresh of the Alpinist family, quietly adding a new model in a more streamlined 38mm case, forgoing the cyclops and internal bezel, and complete with Seiko’s impressive 6R35 caliber boasting an extended 70-hour power reserve. For me and other card-carrying Seiko nerds, a question naturally emerged: Was this new Alpinist simply a smaller version of the classic SARB017 design or something more altogether? After spending an extended period with both the green-dialed SPB155 and charcoal-dialed SPB159, and as a previous owner of a SARB017, I find myself uniquely positioned to approach this scintillating conundrum. 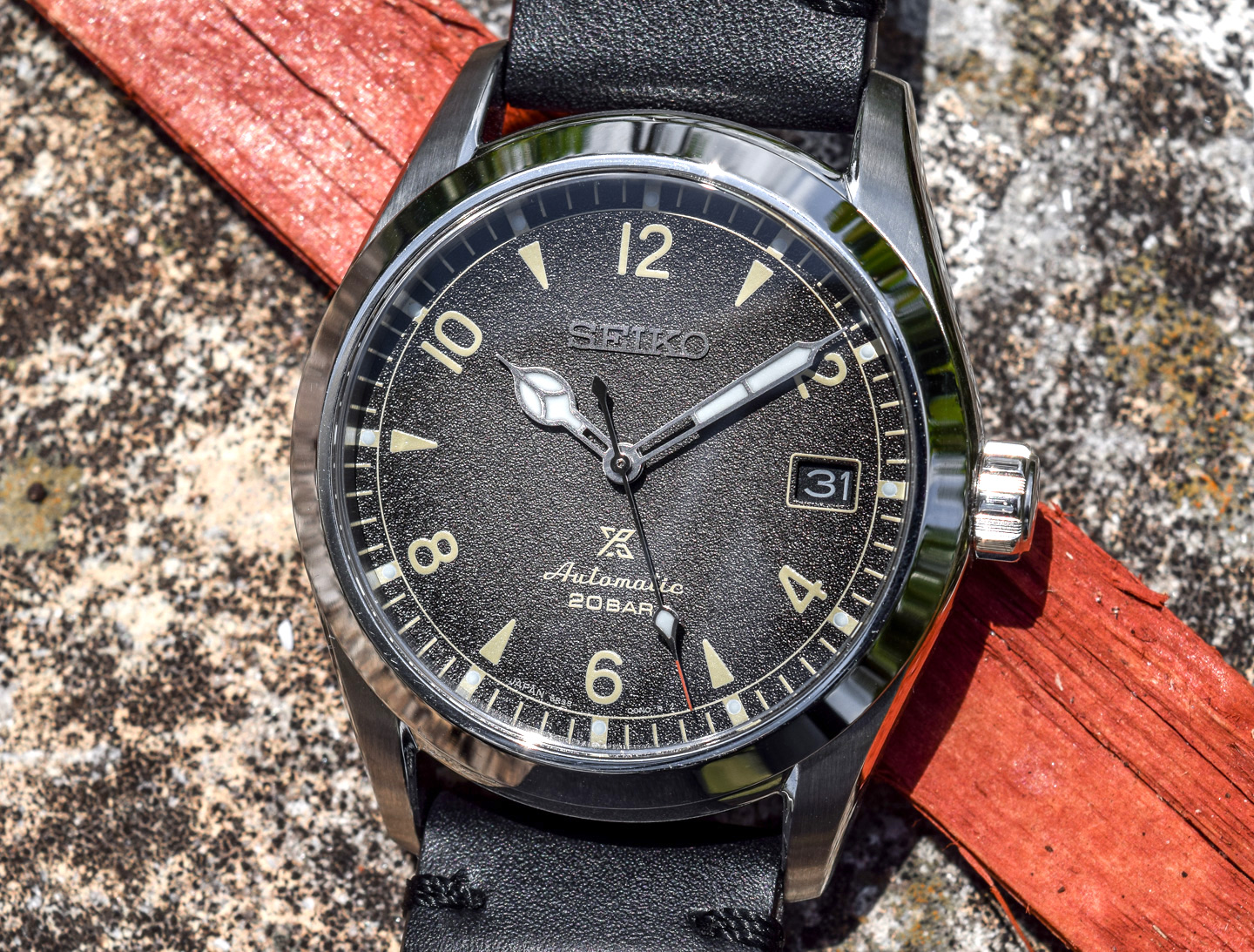 Speaking truth to power, and setting aside the more than occasional QC hiccup, Seiko absolutely smashes the dial game on the affordable side of affairs, and this new Alpinist is no exception. Generally following the larger Alpinist, the SPB155 and 159 carry over the theme of Arabic indices at the even-hour positions with triangular indices elsewhere, in this case printed in an off-white tone just within a railway minute track. But where the new smaller Alpinists distinguish themselves is with the subtle granular texture of the primary dial surface, which also features a fumé effect that darkens as you approach the dial’s outskirts. In direct light, the effect of this new dial is striking and especially impressive for the price point, while also allowing the proven dial layout and of course the signature lumed cathedral handset to ensure excellent legibility overall. 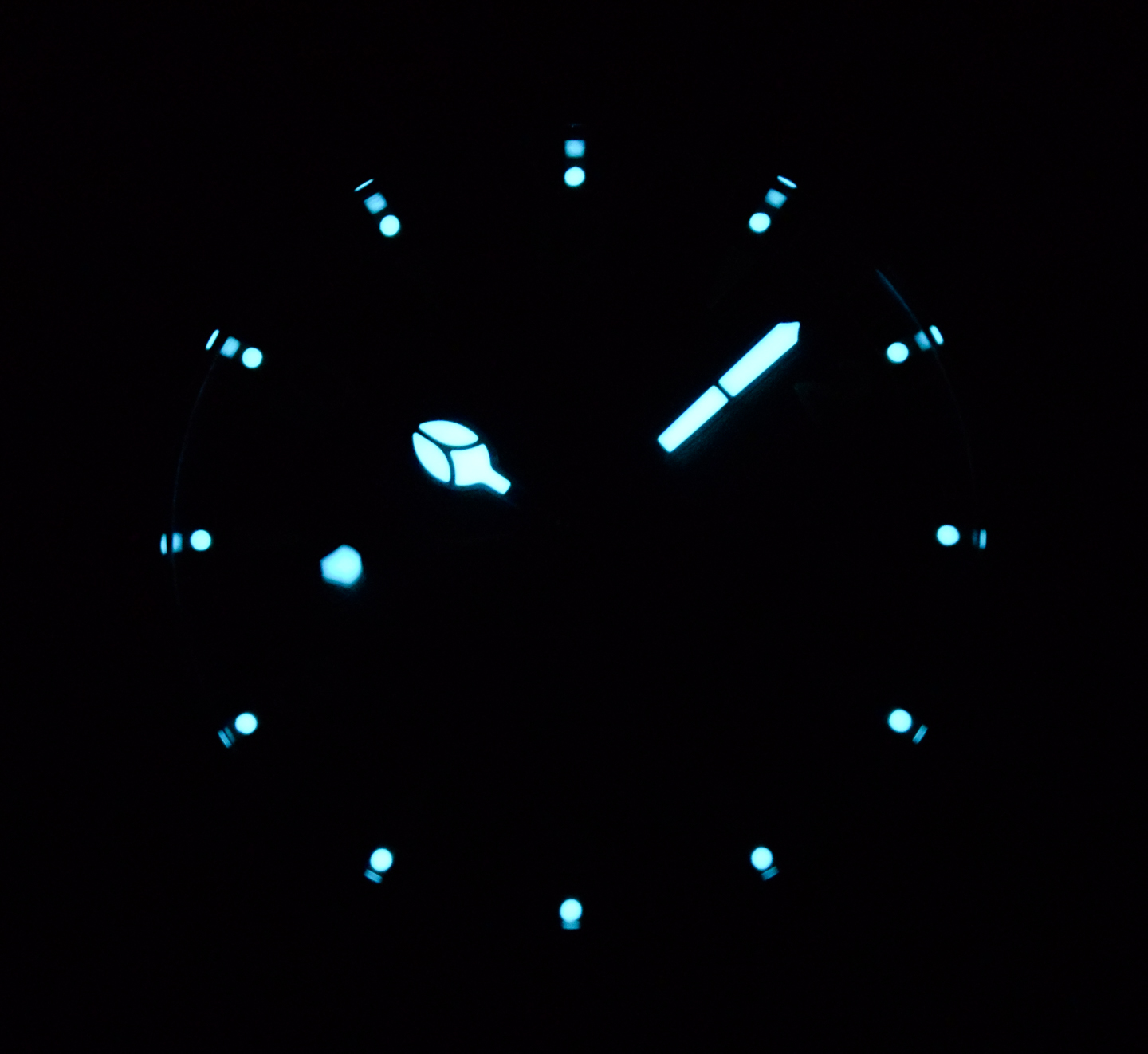 And as a side note, this still being a Seiko and all, the hands as well as the small lume plots located within the minute track glow impressively well for the category, and likely better than you’ll ever require. In terms of dial text, the standard applied Seiko wordmark is in its usual spot at noon, along with the (much-hated) Prospex logo, “Automatic” in cursive text, and an advertisement for the substantial water resistance at 6 o’clock. At 3, we have a standard date window equipped with a white-on-black date wheel that is much more subtle compared to the magnified model on the traditional Alpinist. Overall, this smaller Alpinist feels to me like it has distilled the very best aspects of the larger sibling into a more succinct package without any additional baggage. And frankly, I’m not sure anyone has ever used a compass bezel, anyway. Cue the keyboard overland explorers. 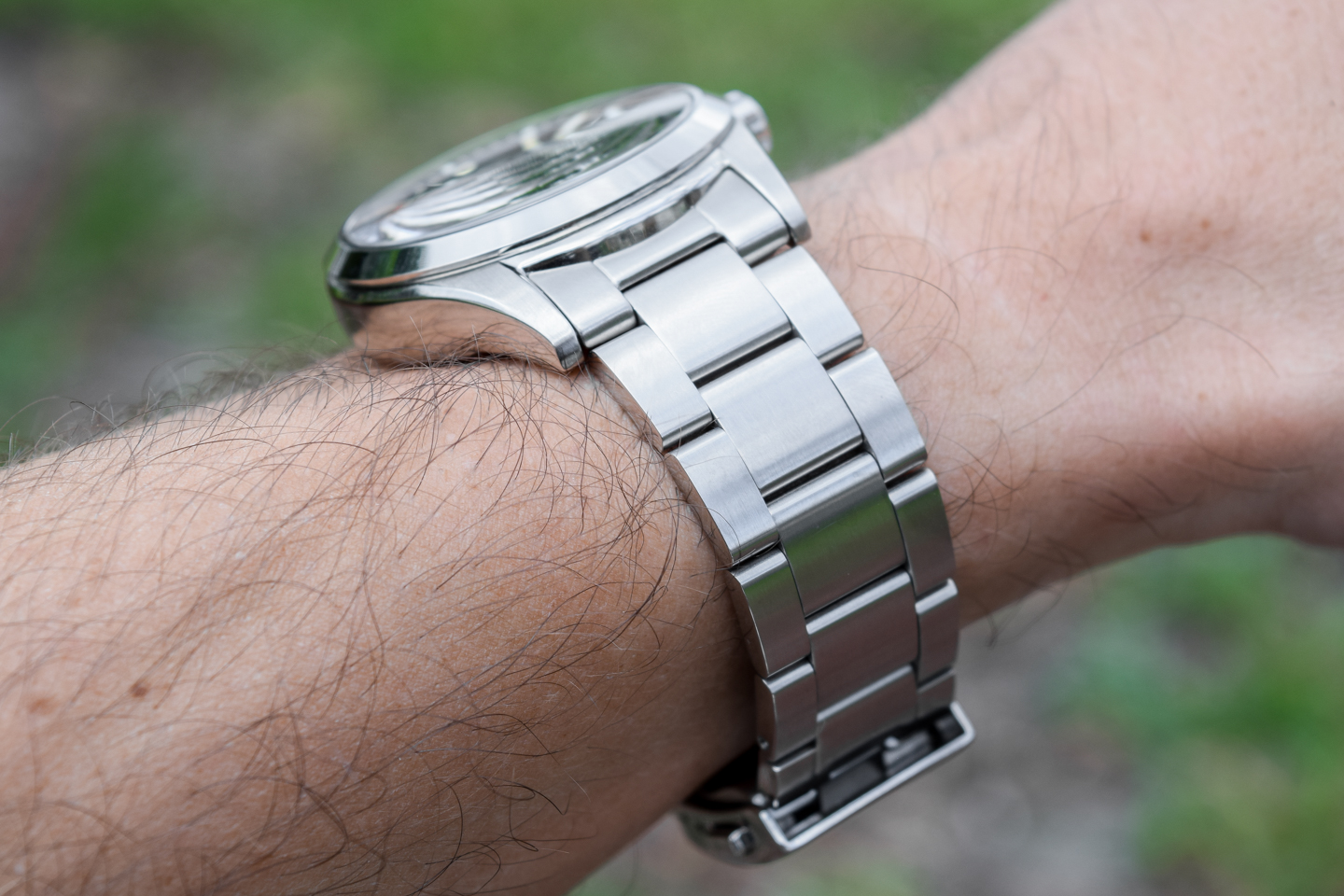 Comparing the SPB155 and 159 to the larger SARB017 or SPB121, the differences in size and presence are actually minute, with the smaller Alpinist only coming in at 1.5mm smaller in diameter at 38mm, as opposed to the 39.5mm case of the larger models. Lug-to-lug is essentially the same at around 46mm, a restrained figure that ensures all but the most slender wrists can enjoy this collection of watches. The SPB155 & 159 are also relatively svelte for a watch of this style, at just under 13mm in height even counting the slightly domed sapphire crystal. At least on my own 6.5” wrist, these are close to ideal dimensions, and the wearing experience of this watch is fast becoming my standard for a watch of this style. 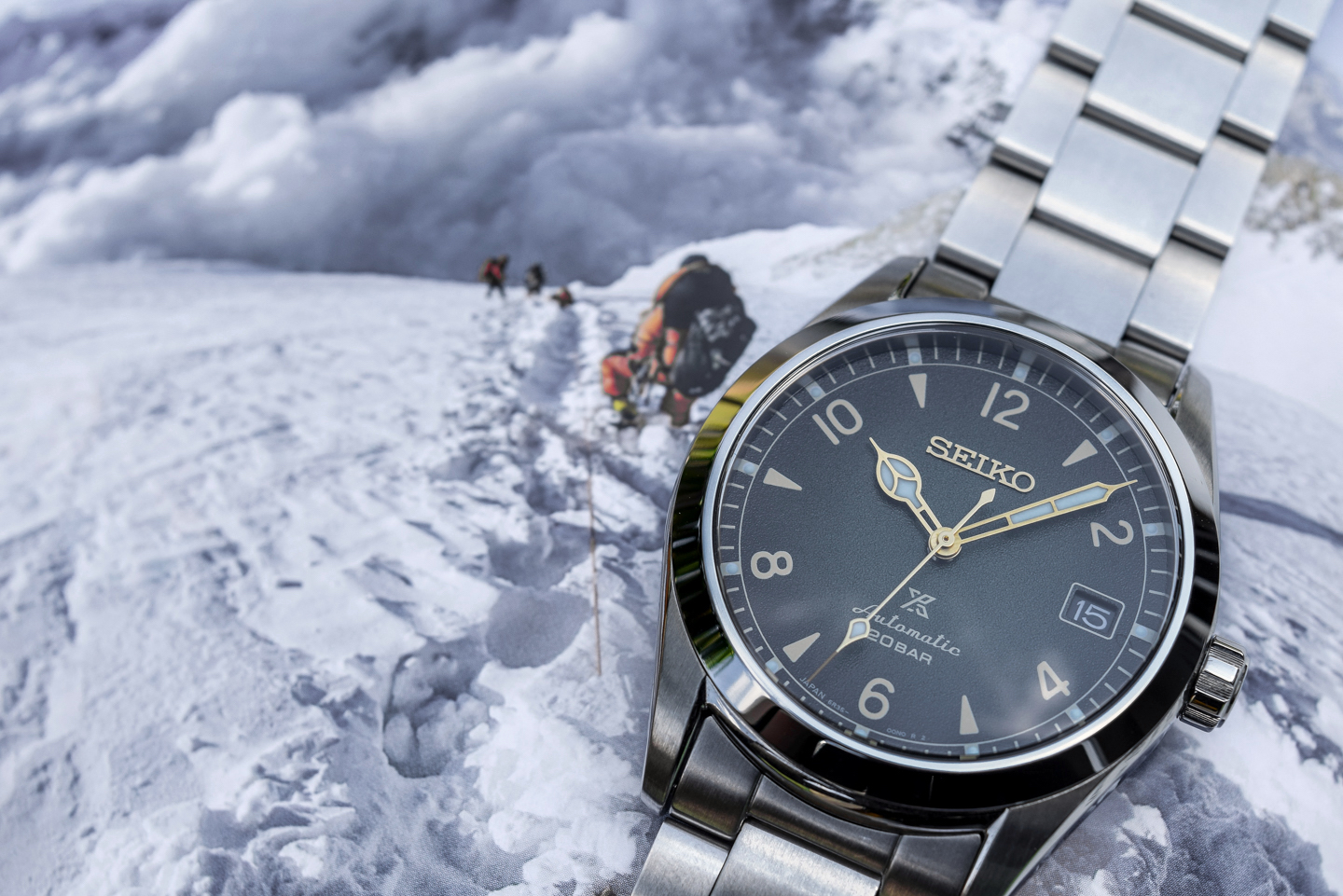 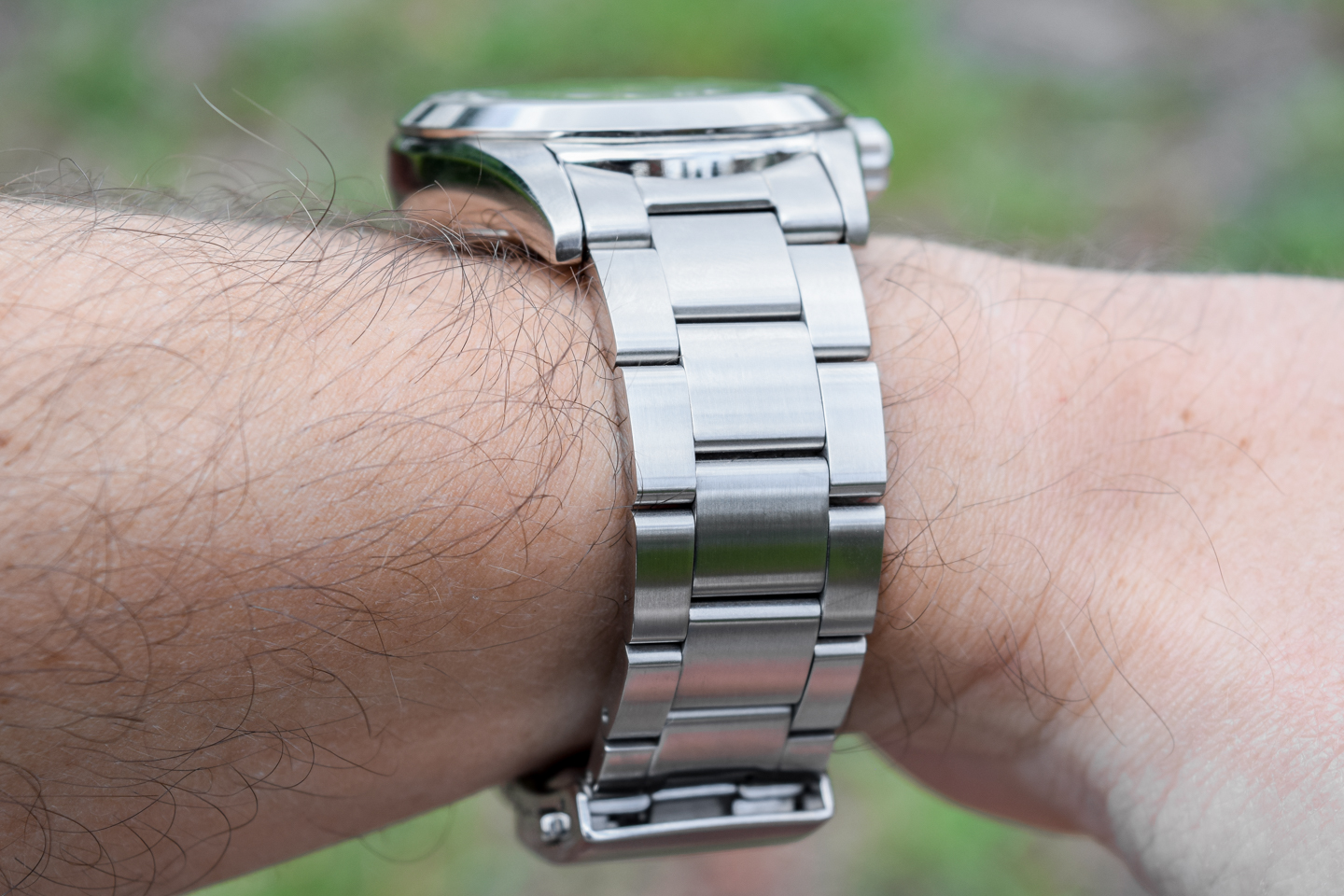 The actual case architecture is relatively straightforward with an overall design that for me — and this is the first of several times I’m going to say this — echoes the Rolex Explorer in both look and feel, with curved and polished case sides paired with a brushed top surface and eye-catching highly polished bezel. At three, an unsigned screw-down crown — along with the screw-down exhibition caseback — secures this watch’s 200-meter water resistance rating, truly impressive for this kind of watch and the kind of stat that makes a powerful argument for this piece as a daily driver in virtually any setting. Looking at the finishing and wear in totality, this is a well-executed and charming case I’d say doesn’t necessarily even wear any smaller compared to the SARB017, with the Baby Alpinist’s dial taking up more of its case relatively speaking, thanks to the lack of the internal compass bezel.

Set between the 20mm lugs, we are confronted with an area of marked concern in many Seiko watches, the bracelet and strap charged with keeping this watch in place. 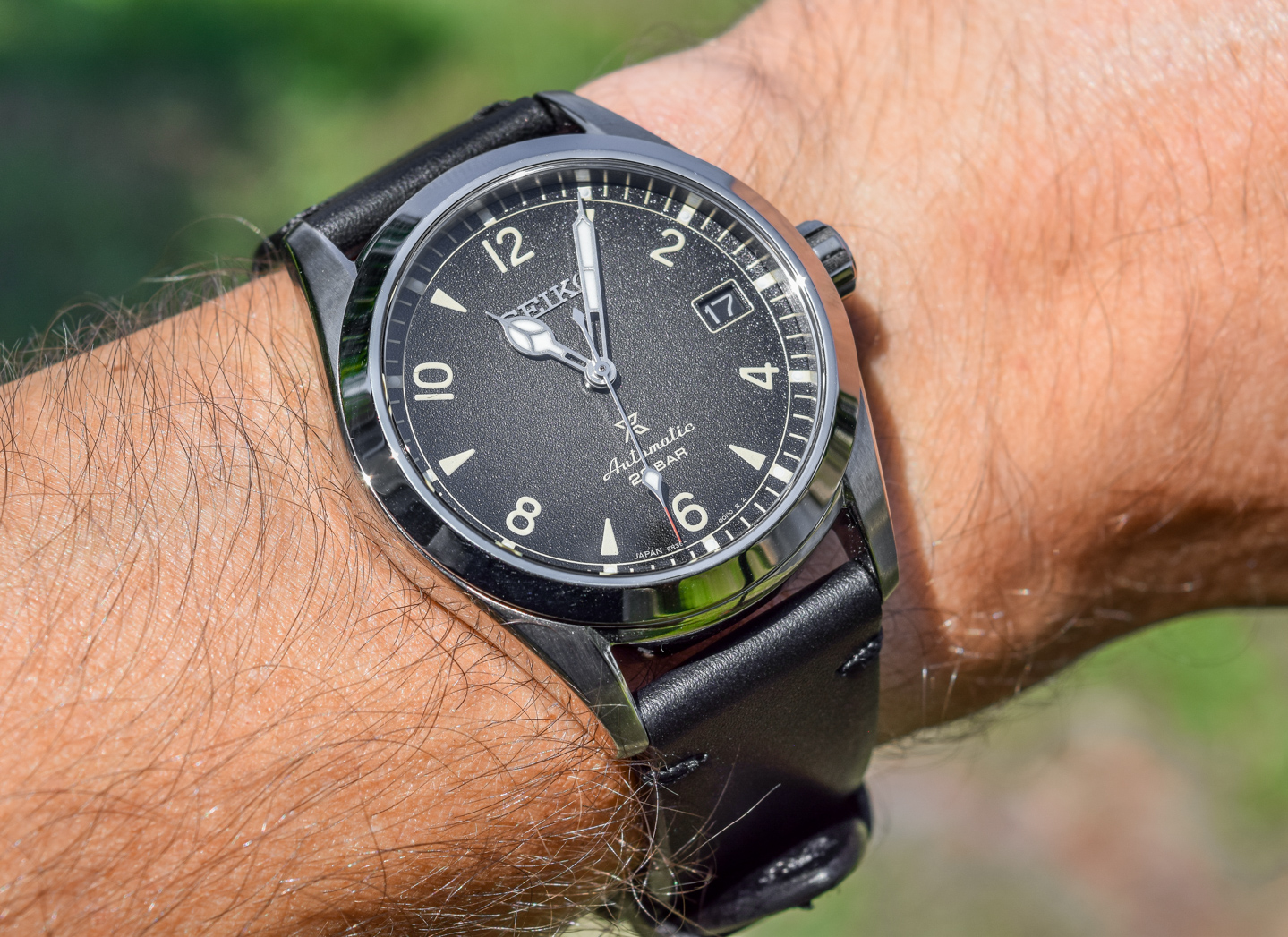 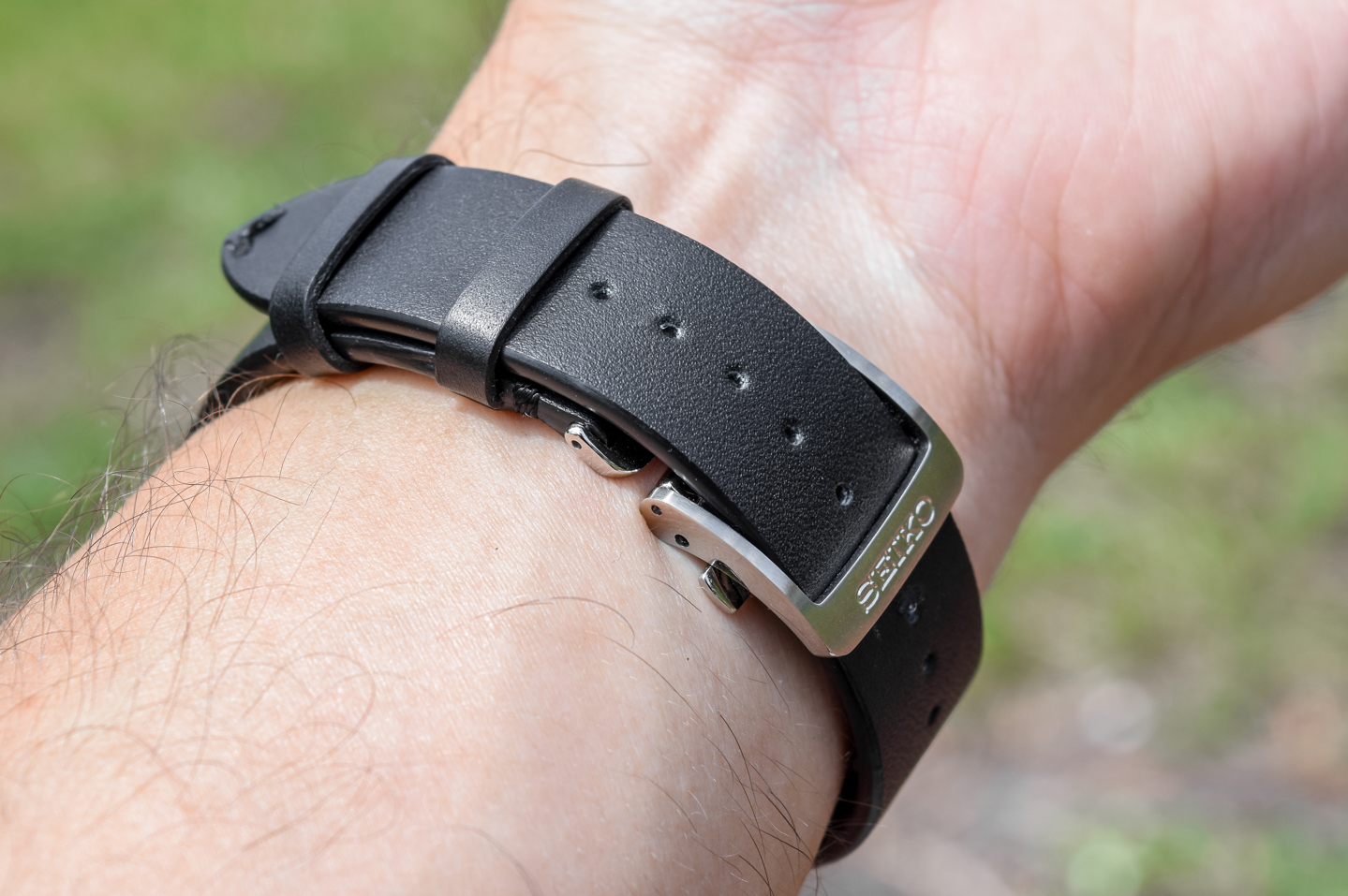 The SPB155 makes use of a three-link, generally Oyster-style bracelet augmenting my Seiko Explorer argument while actually being pretty solid by this brand’s standards, with solid end links and a substantial feeling signed clasp, though it is stamped. At any rate, it’s perfectly serviceable, and if you’re more of a strap person, the 159 has a nice one, executed in leather dyed to match the dial and closed with an especially nice fold-over deployant clasp. As another note, the strap is oriented the Patek way around, with the long end coming from the six o’clock side of the watch. This leather strap broke in quickly, was comfortable, and gave the watch a more rugged and casual look compared to the bracelet. Well done, Seiko, on both fronts, and you really can’t go wrong with either of these if this is a watch you’re considering. And while these strap options are an improvement over many older Seiko offerings, the greatest single value proposition here has to be with the new caliber. 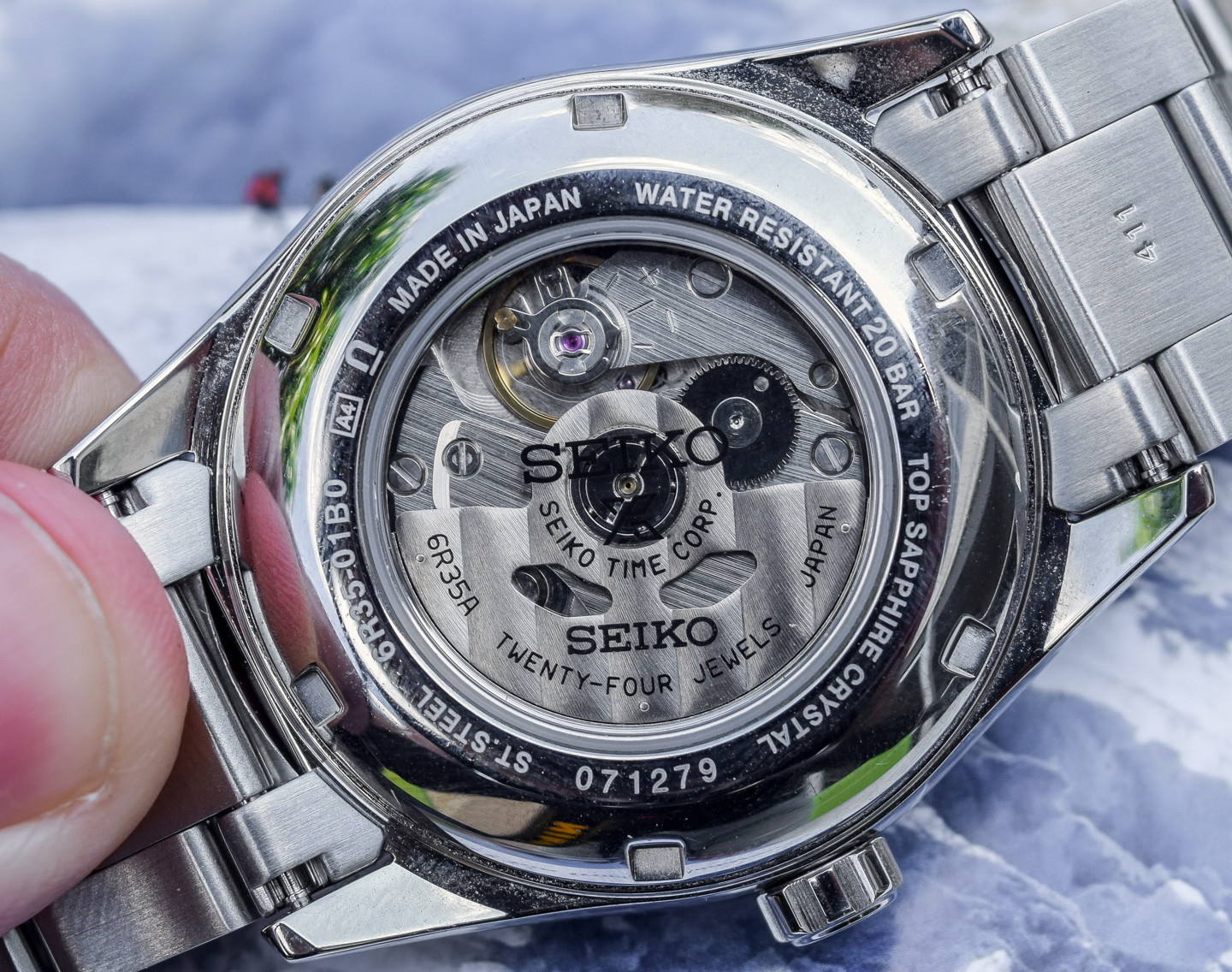 Compared to the 6R15 calibers associated with the SARB017, which are absolutely nice movements, the 6R35 utilized by both of these infantile Alpinists as well as the new SPB121 is another step in a positive direction on Seiko’s behalf. In terms of its spec and tech, the 6R35 operates at Seiko’s standard 21,600 VPH or 3 Hz, features the obligatory hacking and hand-winding functionality, and has an impressive Friday to Monday power reserve of 70 hours. Viewed through the exhibition caseback, the level of decoration on the 6R35 is utilitarian at best, but frankly there isn’t much to ask for in a $700 watch in that department anyway. For me, the biggest possible drawback with this caliber, as well as many Seiko movements, is the stated accuracy, in this case listing  -15 to +25 seconds a day. And while that isn’t great, in fairness, both of the examples I reviewed were keeping time in the low single-digits per day, and my iPhone actually keeps great time as well, so I won’t lose any sleep on this front, and neither should you. 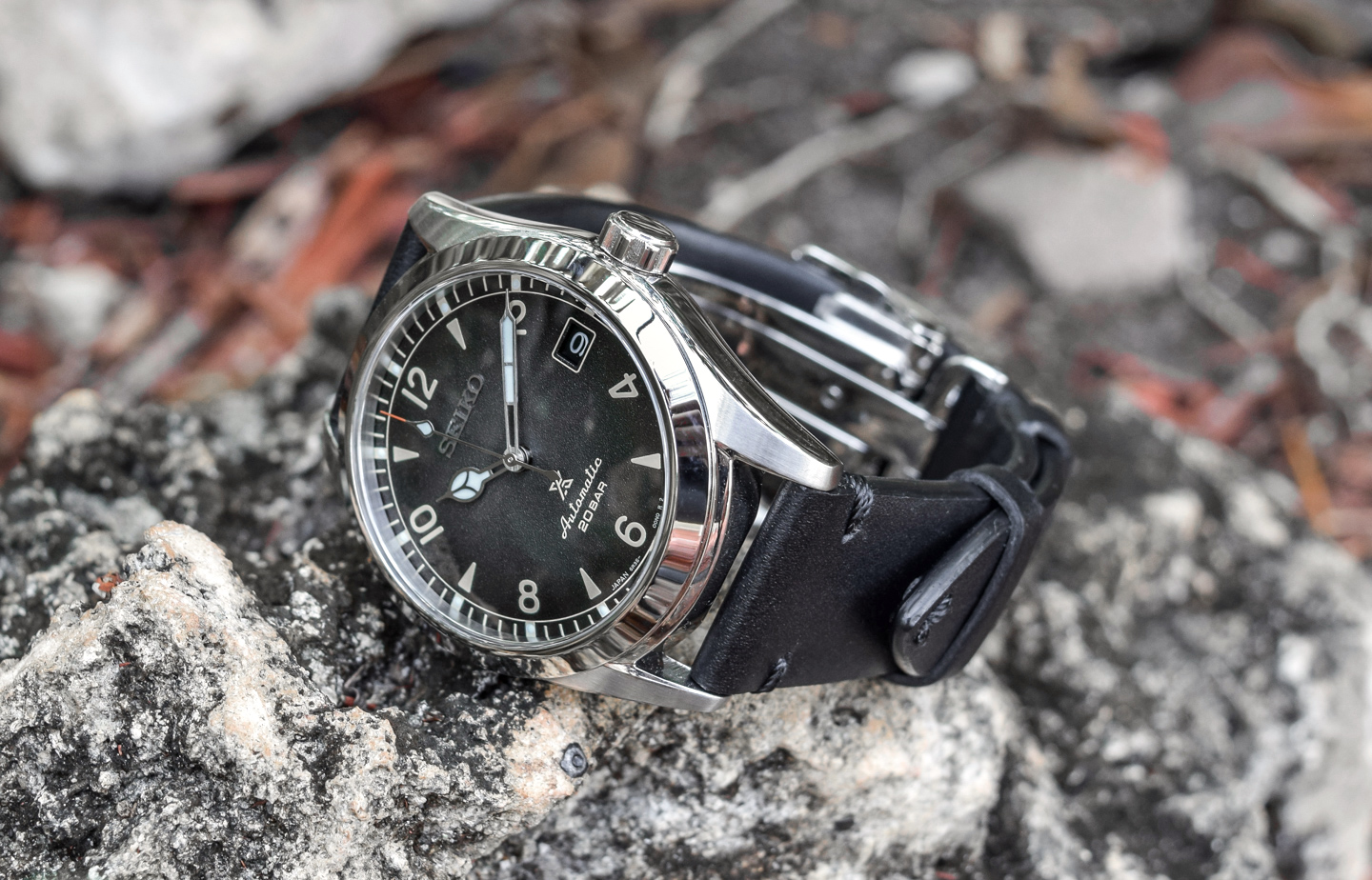 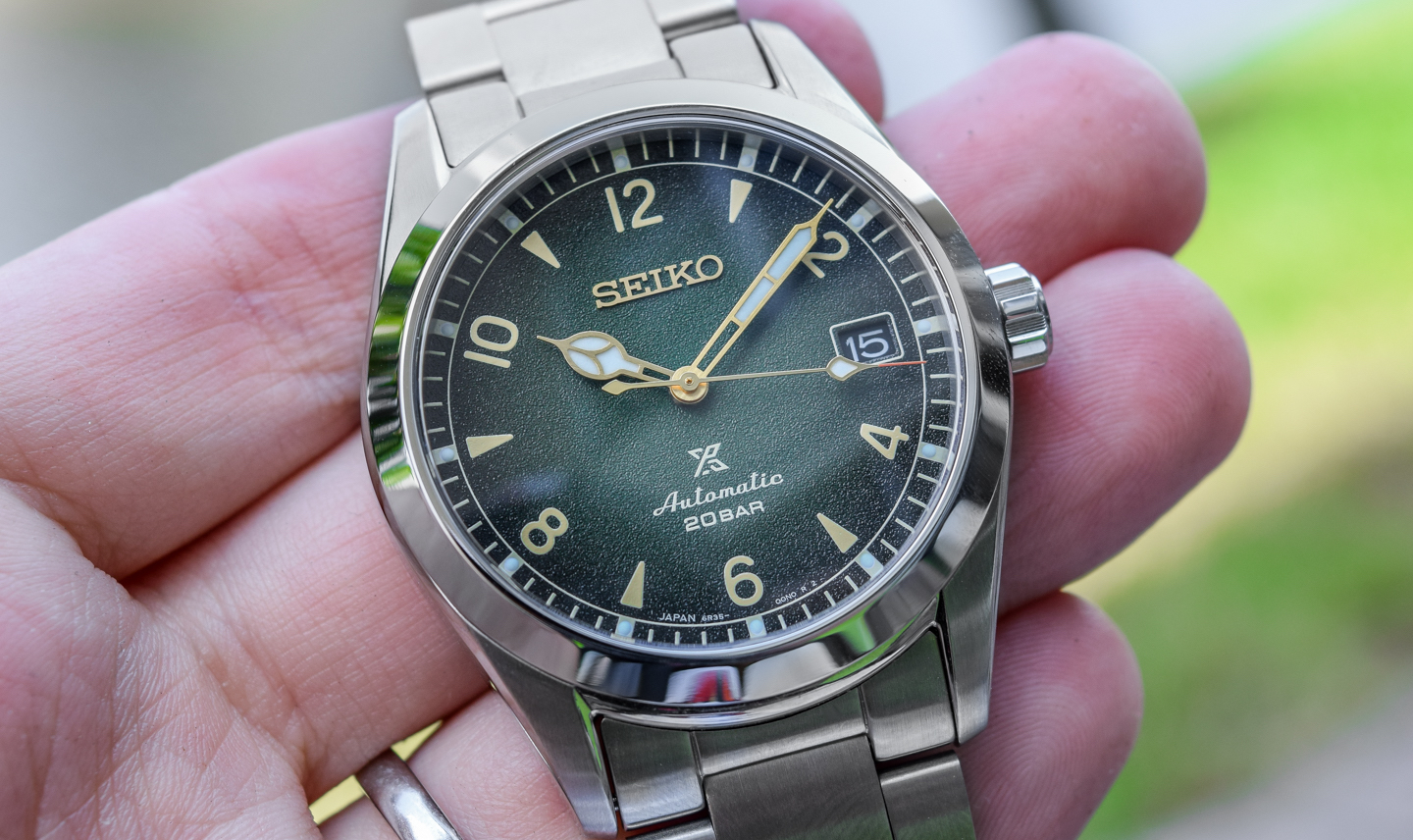 Compiling something like a final argument here, there is a great deal to like about this new so-called “Baby” Alpinist, from the well-proportioned smaller case, the beautiful grainy dial texture and color, some improved bracelet and strap options, and of course the new caliber. This is also another good moment to bring in the $700-$725 price point of these watches, a range that doesn’t give you a ton of other options for elevated field watches of this style, and even if it did I think this collection would still stand out. Say you’re a Seiko fanatic with a pile of iconic Seiko dive watches looking to scratch more of the aforementioned Explorer itch, this Baby Alpinist would fit nicely into that niche while keeping you in the Seiko family (and saving you a significant amount of money). I might also be a bit unfair in tentatively labeling this watch the Seiko Explorer, as this dial execution in particular plants this piece firmly in the Alpinist collection, one with almost as much history and a much more alluring blue-collar market position compared to our friends over at the Crown. I don’t think this watch needs the association to hold up. Allow me to summarize. 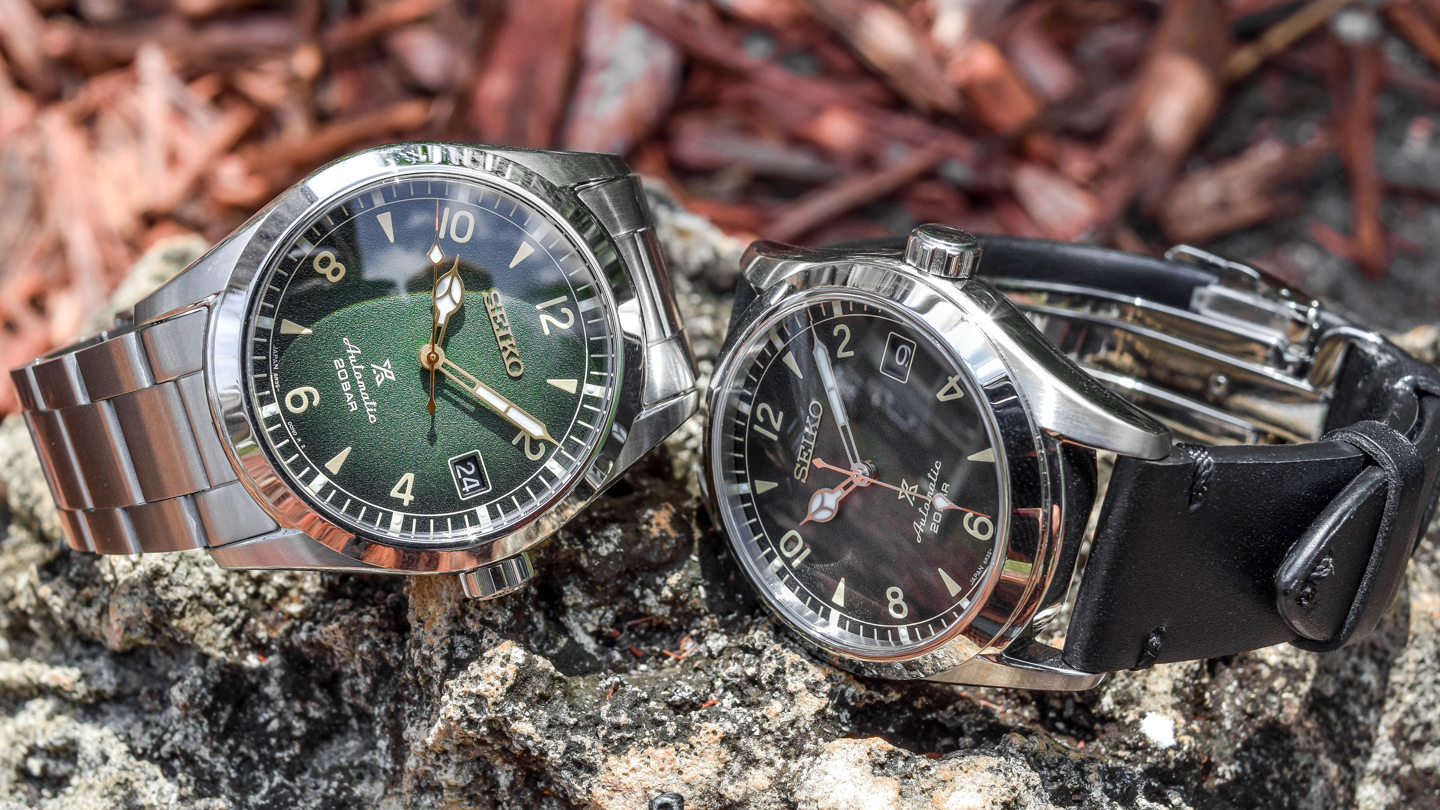 Looking for a field watch with more of a refined touch that is still capable of accompanying you on pretty much whatever adventure you can think of? Wait, you’d like it to look great, have strong lume, and also carry an impressive caliber and extended power reserve? And you like the traditional Alpinist design but find it just a bit much? Look no further — your Seiko has arrived.  The Seiko SPB155 and SPB159 are available from seikousa.com for $725 and $700 , respectively.

>Brand: Seiko
>Model: SPB155 and SPB159
>Price: Seiko SPB155: $725, SPB159: $700.
>Size: Diameter: 46mm lug-to-lug; 12.9mm-thick; lug width: 20mm.
>When reviewer would personally wear it: This watch has go-anywhere-do-anything levels of versatility and could even be dressed up to a decent extent, especially on the bracelet.
>Friend we’d recommend it to first: The Seiko fan who is curious about the Explorer end of the field watch world.
>Best characteristic of this watch: The dial texture combined with the fumé effect is a slam dunk.
>Worst characteristic of this watch: I’m splitting hairs here, but it would have been cool to see the indices themselves lumed as opposed to the small circular lume plots, but the lume is still great.