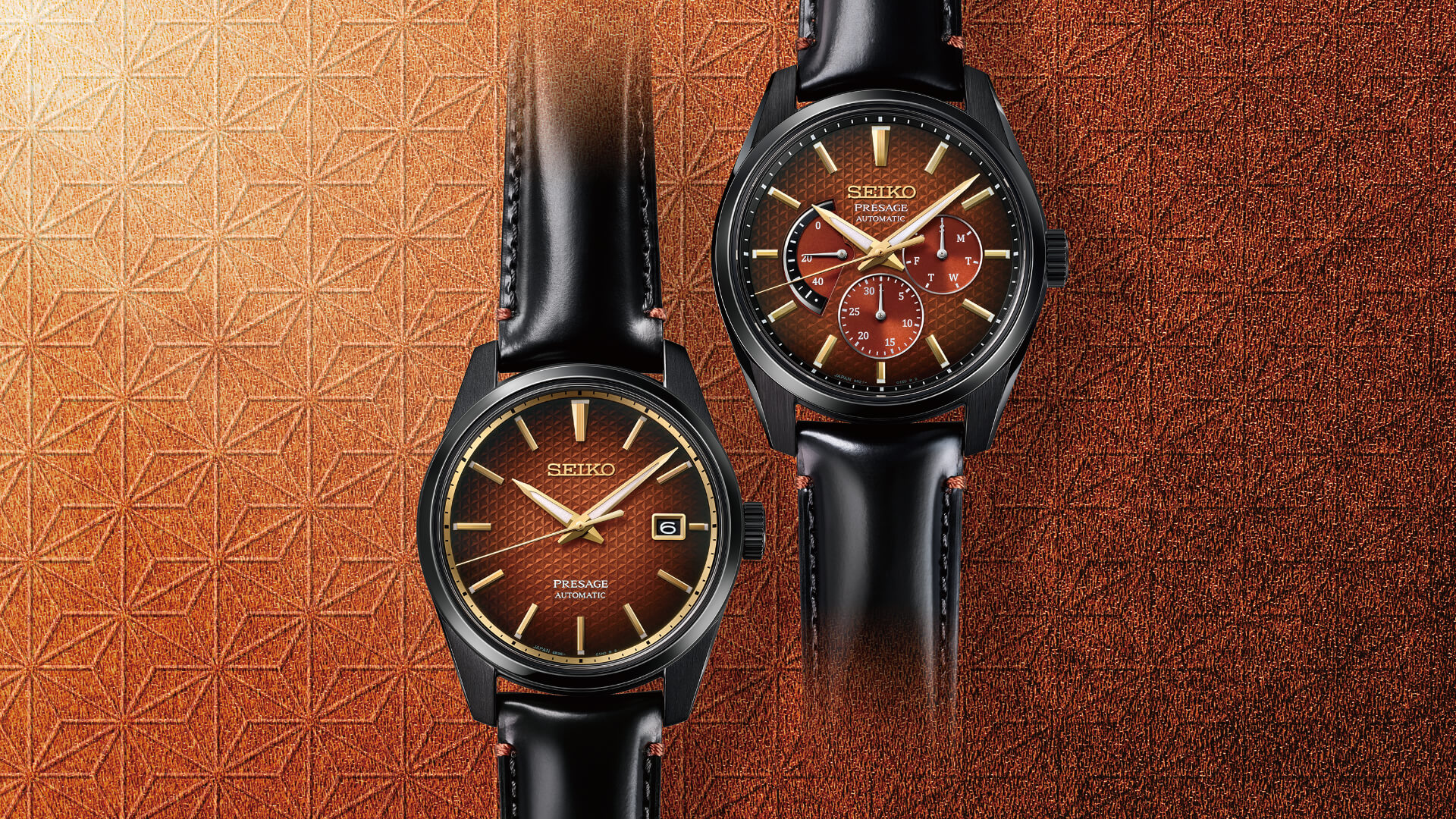 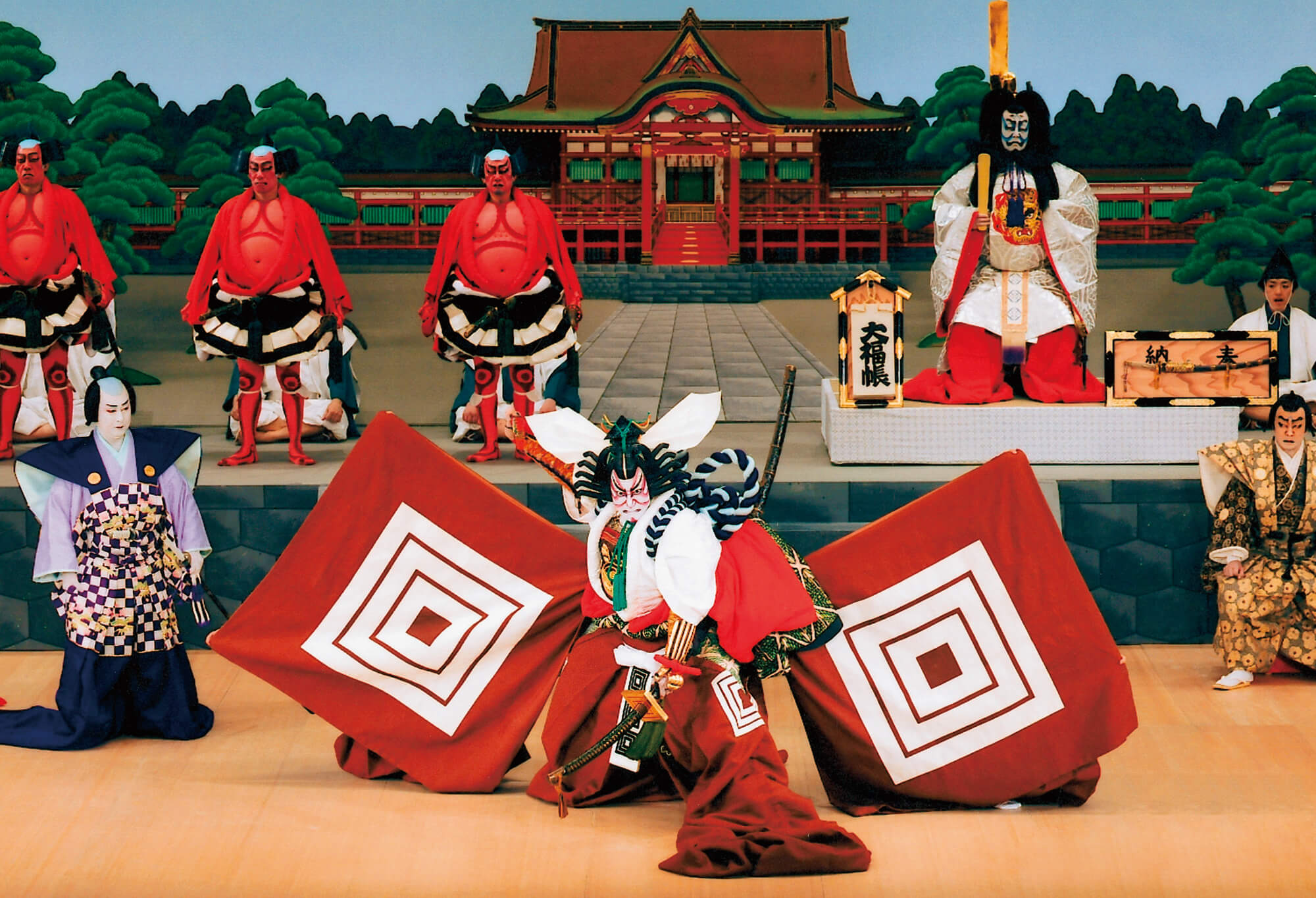 I think it was around 2016 or 2017 when Seiko suddenly started releasing a torrent of limited editions with special dials. Since then, the Japanese watchmaker has not relented, continuing with its stream of engaging dials in striking cases, all while playing it fast and loose with the word “limited.” One of the defining elements of Seiko’s dial design is its use of the cultural, historical, and natural landscapes of Japan. From white dials with texture borrowed from a mountain ridge to mosaic dials recalling paving stones in Tokyo, Seiko’s sources of inspiration at times strain credulity; is it possible—heaven forbid—that Seiko just designs pretty dials and then finds post facto inspiration? Perhaps more importantly, even if that’s the case, does it matter, so long as the results are beautiful? Because they are almost universally beautiful, including the latest additions of two Presage models in the line’s Sharp-Edged Series that take their inspiration from Japanese Kabuki theater. 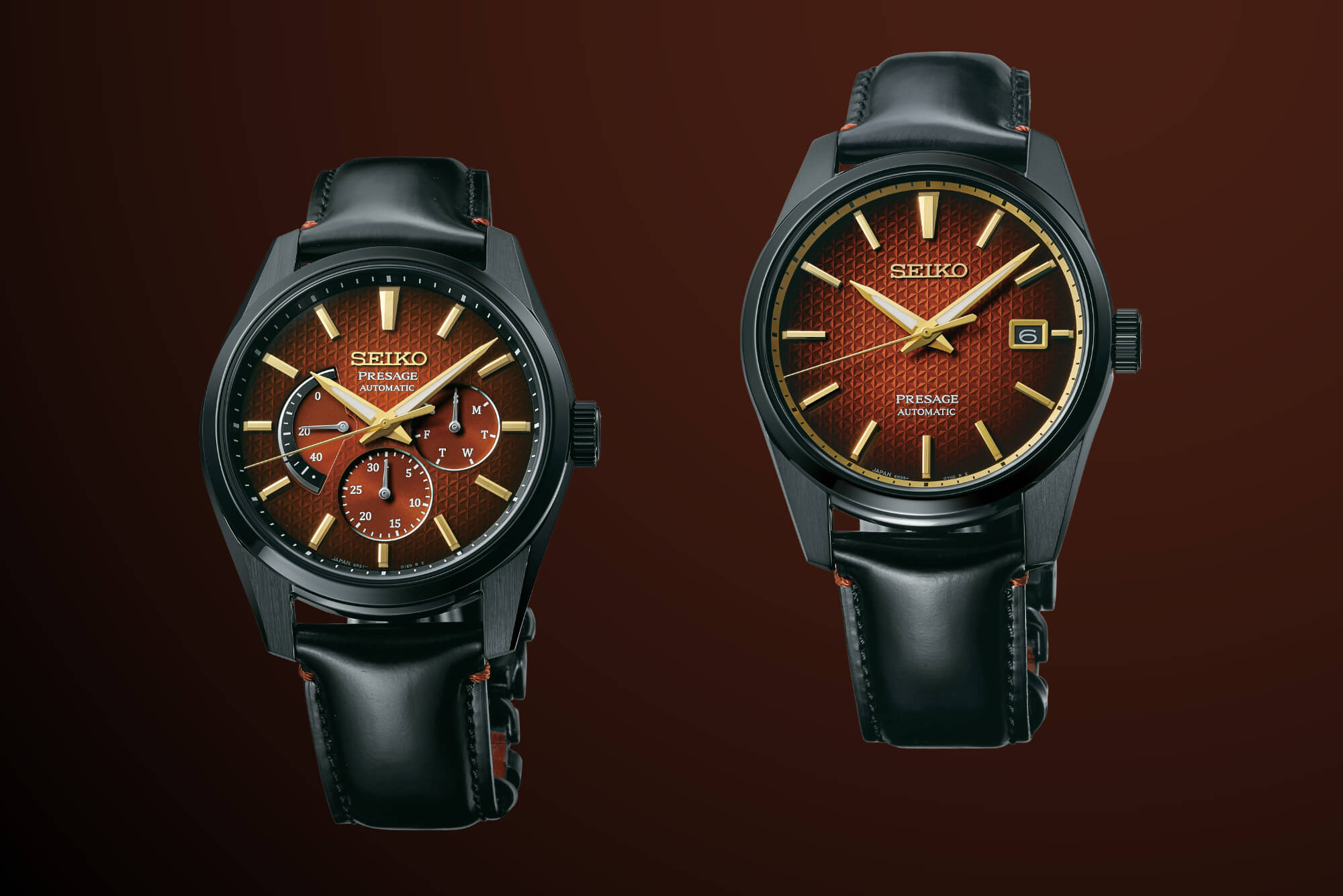 To be clear, these new models are not entirely new, but rather limited-edition colorways of existing Presage Sharp-Edged models. The Sharp-Edged Series is comprised of GMT, three-hand, and calendar/power reserve models, the latter two of which were used, respectively, for the SPB329 and SPB331 Kabuki models. The Sharp-Edged Series is defined by the use of a Japanese Asanoha (hemp leaf) dial pattern in traditional Japanese colors and sharp edges and angles in the hands, markers, and case. To bring the rich history and tradition of Japanese Kabuki theater to the collection, Seiko collaborated with renowned Kabuki actor Ebizō Ichikawa. For those who don’t know (I’m assuming that’s almost everyone), Ebizō is part of a family of Kabuki actors that goes back to 1660, tracing its roots to Ichikawa Danjūrō I, one of the most famous and most influential Kabuki actors of all time. That family legacy is continued by Ebizō Ichikawa, and it’s with that preeminence with which he approached the project. 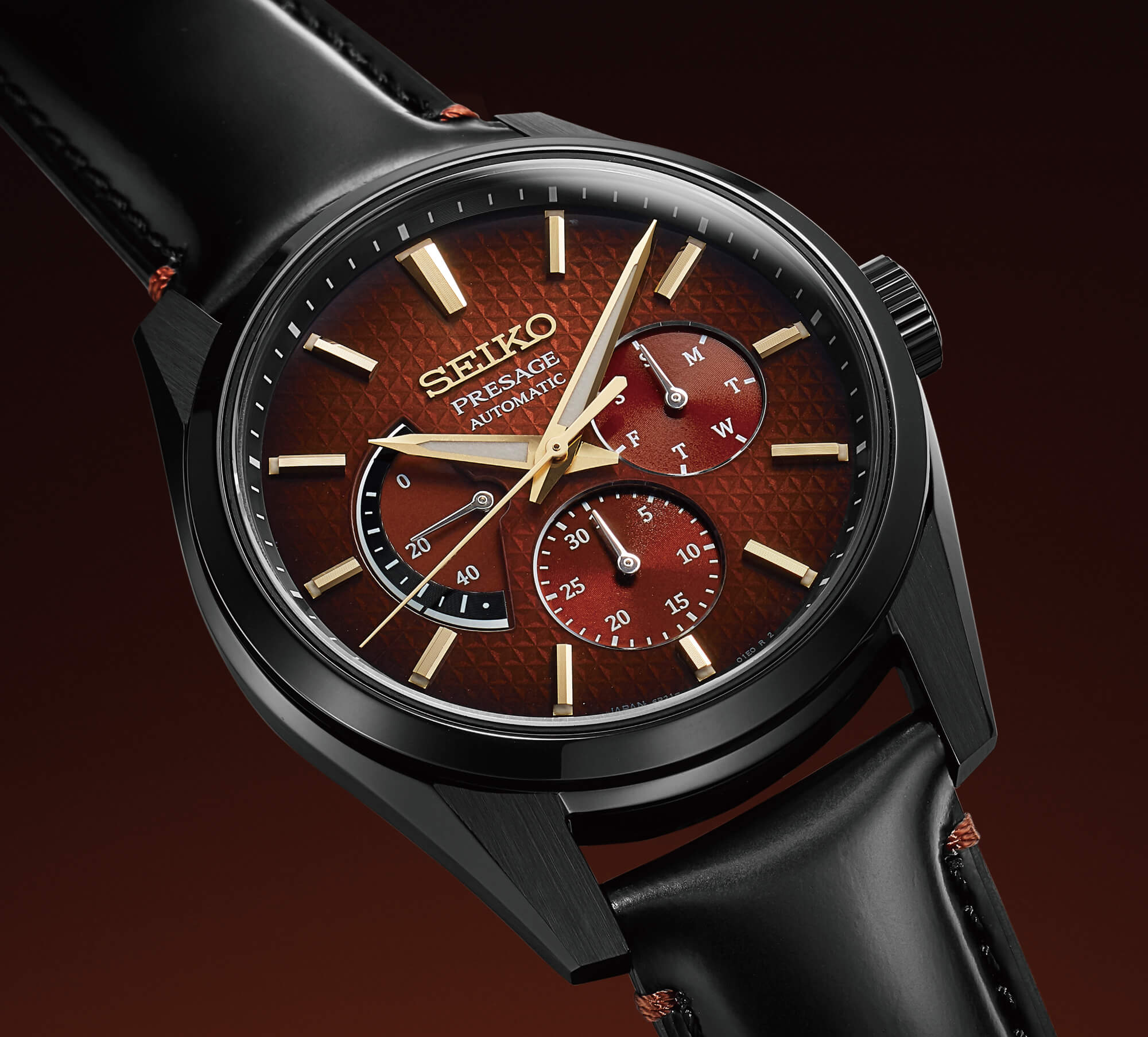 The dial is the main attraction in these two new models. The gloss dial features a gradient that starts with a deep persimmon center (referred to by its Japanese name Kokiiro), which has been used by the Ichikawa family for generations. The gradient darkens at the edge of the dial, and the shifting palette is underpinned by the Sharp-Edged Series’ hemp leaf motif pattern. While the Asanoha pattern was already part of the series, it also happens to have been used for centuries in Kabuki costumes. The sharp hands and angular applied markers have been rendered in gold tone and both feature applications of Seiko’s exceptional Lumibrite lume. As mentioned, two dial configurations are available. The three-hand SPB331 is unobstructed save for the gold-tone framed 3 o’clock date window. The SPB229 on the other hand, overs a much busier dial, with recessed day and date subdials, and a recessed retrograde power reserve indicator at 9 o’clock, all in the same Kokiiro shade of red. Somewhat oddly, the subdial hands are silver-tone, which I’d argue doesn’t quite work. 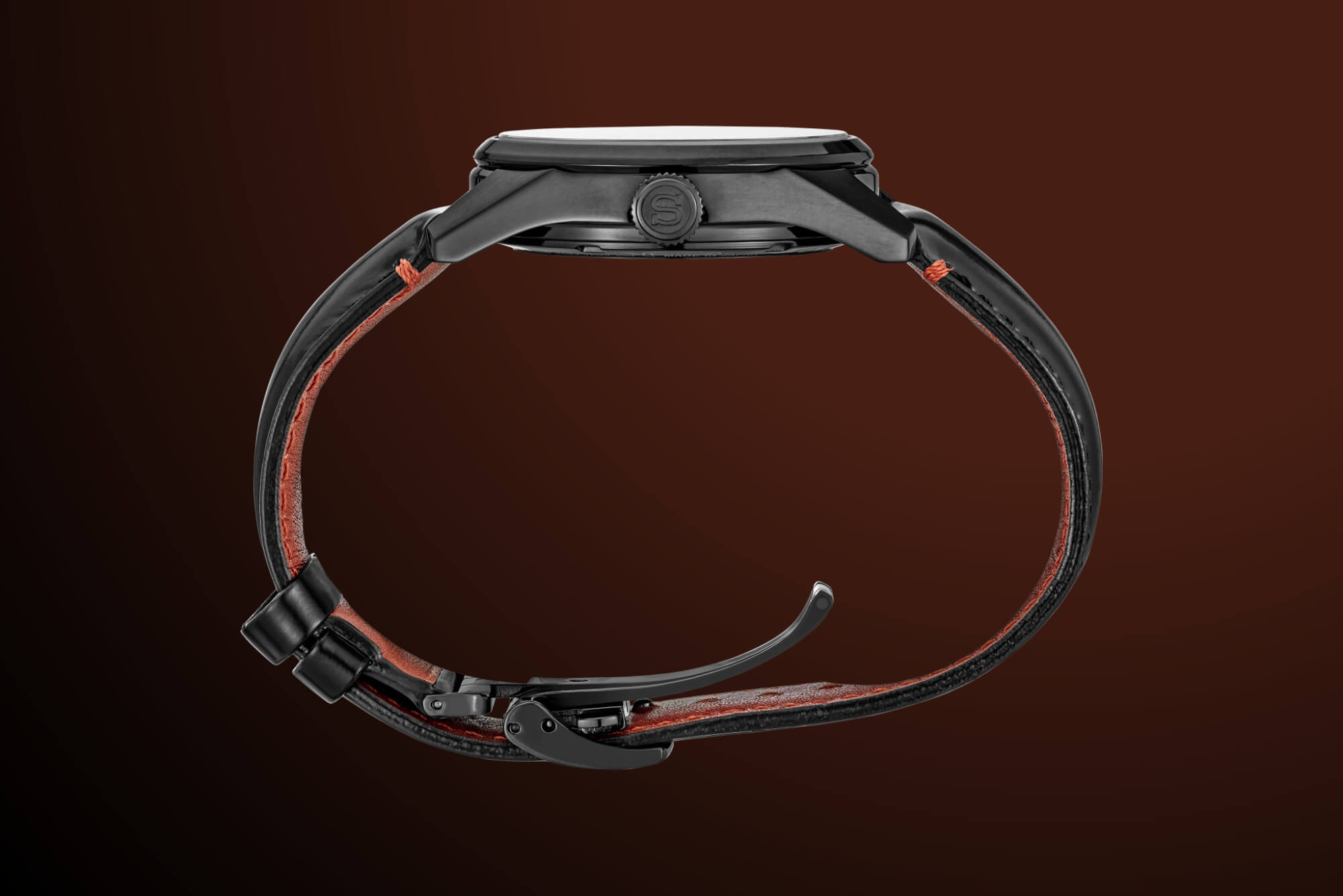 The case of the new SPB329 and SPB331 feature the same overall design—an angular, black-coated stainless steel case—with slightly different dimensions. The three-hand SPB331 measures 39.3mm-wide, 11mm-thick, and 47mm lug-to-lug; the SPB329 is larger to accommodate its movement, measuring 40.2mm-wide, 13.7mm-thick, and 47.37mm lug-to-lug. For my money, the added dial displays aren’t worth the extra 2mm thickness, but you’ll know your own wrist best. Most Sharp-Edged models are straight stainless steel, but the black coating makes sense here; it allows the dial to pop and doesn’t create a two-tone metal situation with the hands (subdials on the SPB329 notwithstanding). The cases feature a combination of finishes, with brushing on the lugs and caseband contrasted with a polished bezel, caseband, and chamfer. The case’s form is classic Seiko, with sharp edges, well-defined facets, and a gentle curve to the entire profile. They both feature flat sapphire crystals and 100m of water resistance. The watches are both fitted to leather straps with folding clasps, which feature a black top and a dial-matched Kokiiro backing with matching stitching. 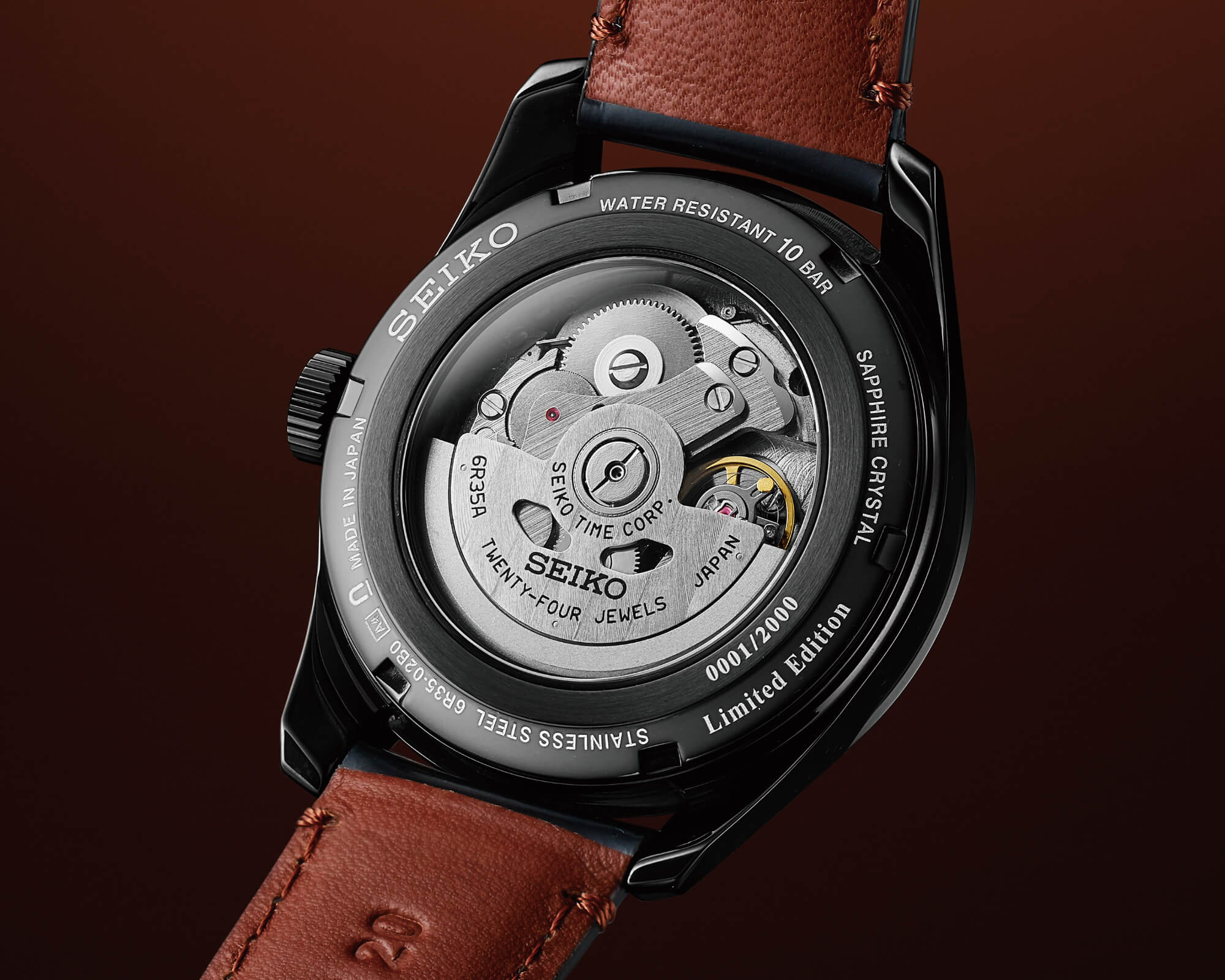 Seen through their sapphire casebacks, the new models both use Seikos 6R series movements. The three-hand SPB331 utilizes one of Seiko’s newest movements, the 6R35, which was released in 2019 as an update to the 6R15. The 6R35 features 24 jewels, a beat rate of 21,600 vph, and an extended power reserve of 70 hours—one more jewel and 20 more hours than its predecessor. The more complicated SPB329 is equipped with the 6R21, which is a bit larger, but also a bit older, released in 2009 (the third release of the 6R family). It has 29 jewels for its added complications, with a faster beat rate of 28,800 vph and subsequently a lower power reserve of 45 hours. I don’t think either movement is anything to scoff at, though obviously, the three-day vs. two-day power reserve is something to consider if you’re torn between the two. 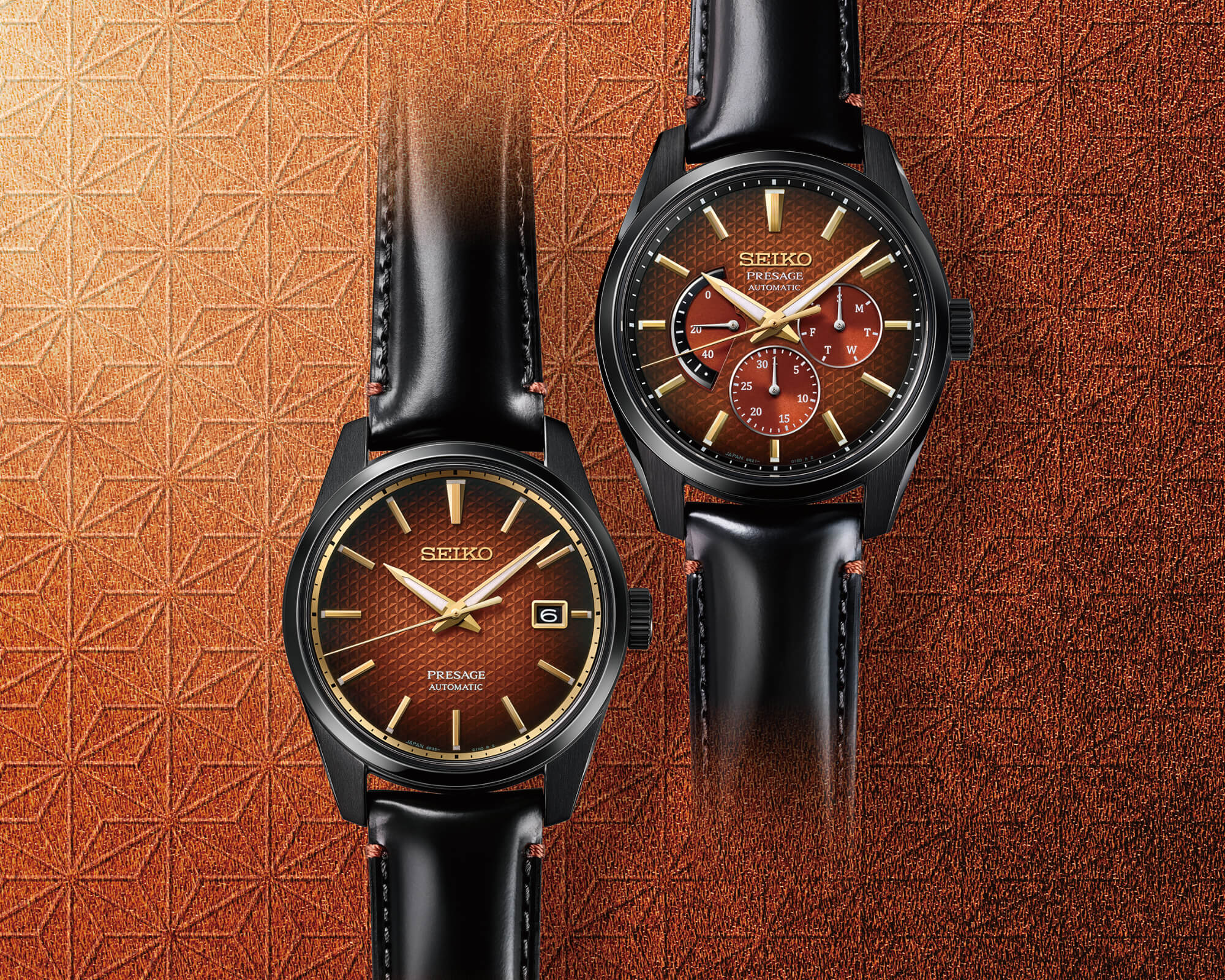 Seiko has a long history of special and limited editions that have been increasing in frequency over the past several years. Many of them are internal special editions—they don’t involve collaboration with an outside entity, just a Seiko designer looking out the window and seeing something pretty. When the brand does connect with an external person or group, the result often pushes the envelope a bit further than the it would do on its own. That’s part of the beauty of watch collaborations, and that’s what has happened here in Seiko’s partnership with the acclaimed Kabuki actor Ebizō Ichikawa. The Seiko Presage Sharp Edged SPB331 is priced at $1,050 USD and the SPB 329 is priced at $1,200 USD, with both models limited to 2000 pieces. For more information, please visit the brand’s website.