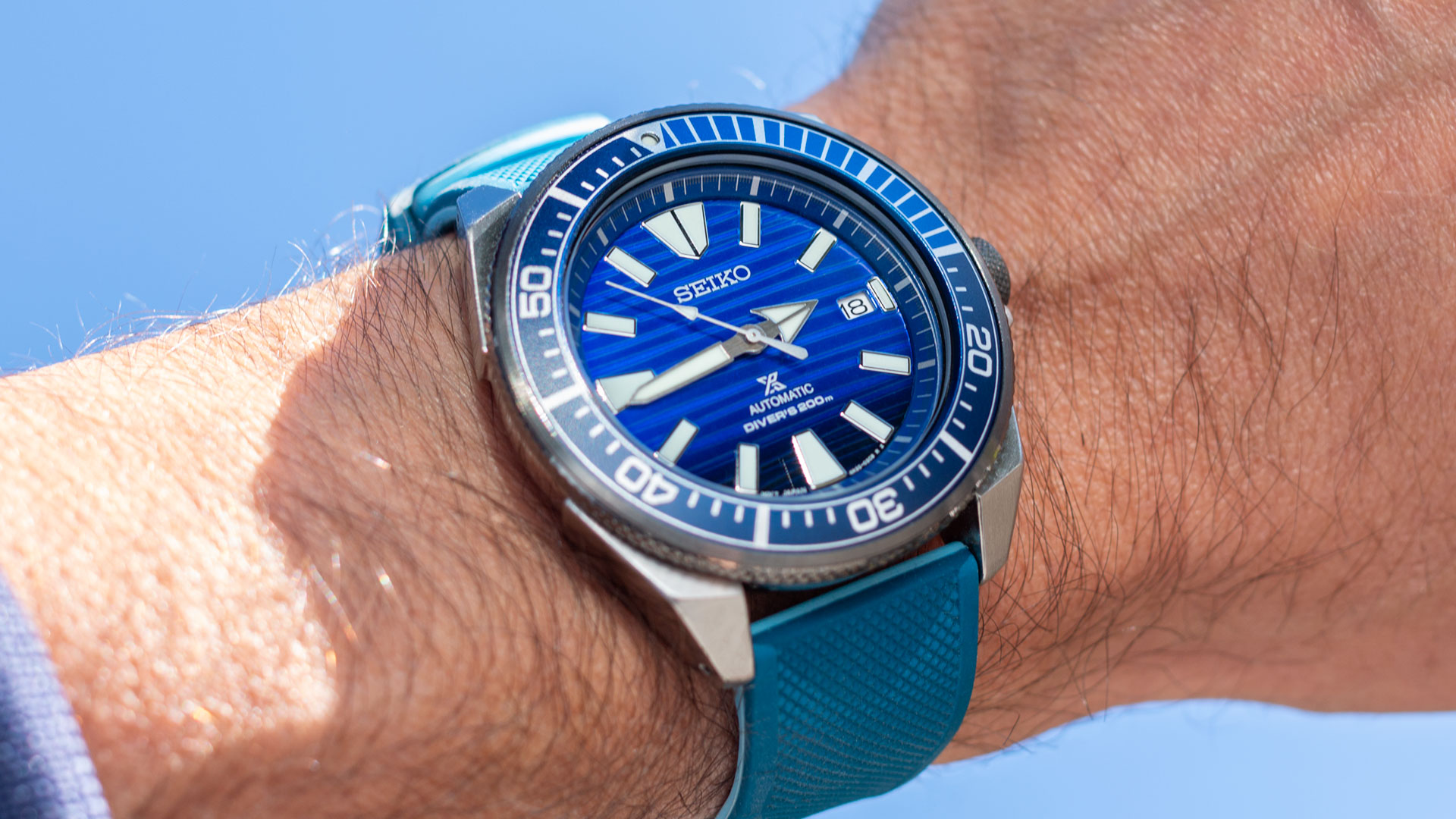 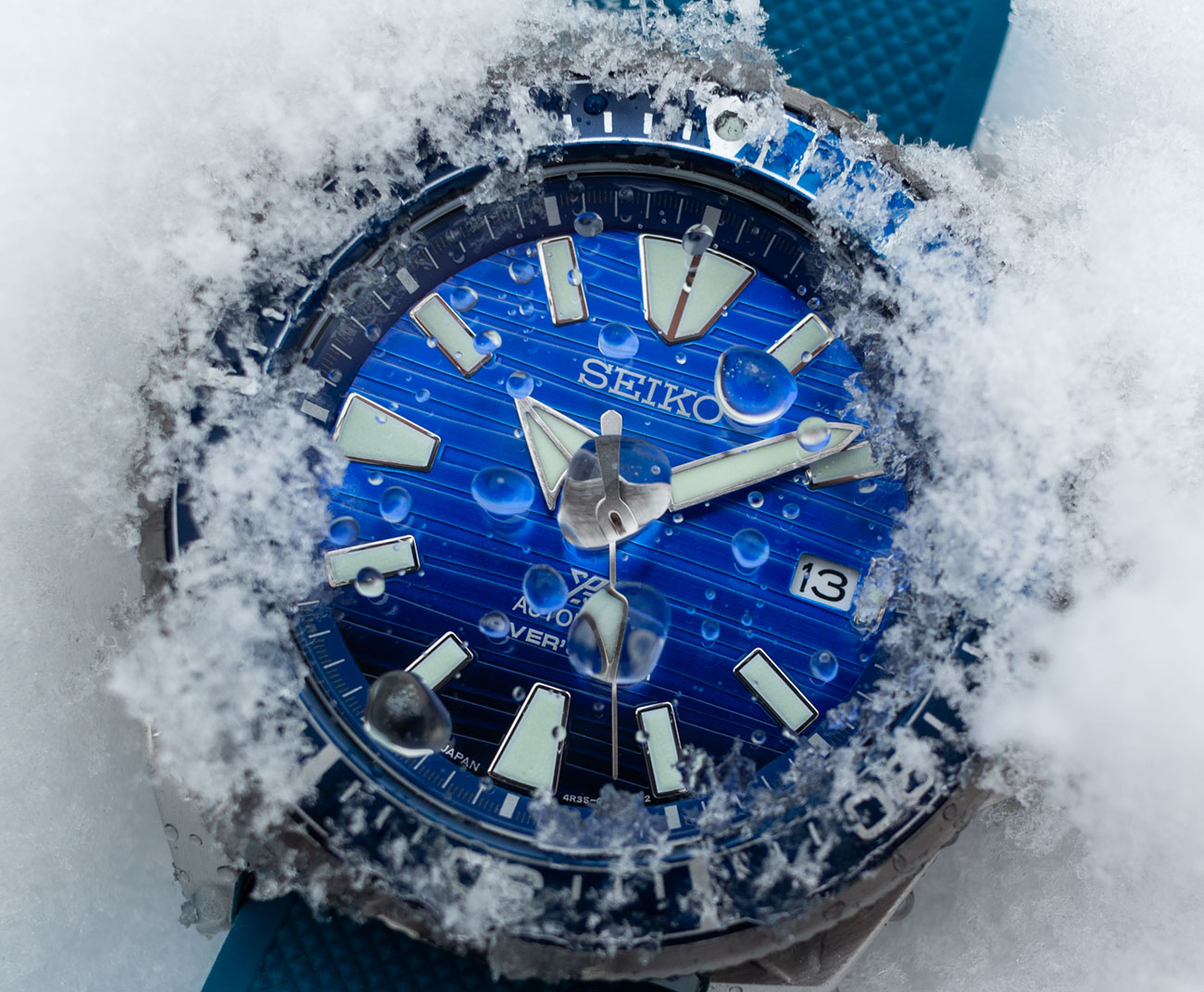 The original Seiko watch design now referred to as the Samurai was released in 2004 with a titanium case which made it kind of special and exciting for Seiko fans. Titanium is not something seen a lot from Seiko today (except in the Astron line), and I feel that bringing the Samurai back in steel missed an opportunity to distinguish it more among Seiko’s dive watch lineup. It would would have increased the price, but titanium would have given the Samurai a clearer purpose and place – not to mention making this hefty case lighter. With its angular lugs, the Seiko Prospex Samurai’s design certainly succeeds in having a bold and unique presence. In another example of Seiko’s fantastic communication efforts, their seiko-design.com website has an article where two Seiko designers discuss different watches nicknamed by international fans, including the Samurai. I don’t see the Samurai moniker’s justification as easily as some others, like the Monster and Turtle, but the name adds to the fun and reminds us of Seiko’s Japanese-ness. 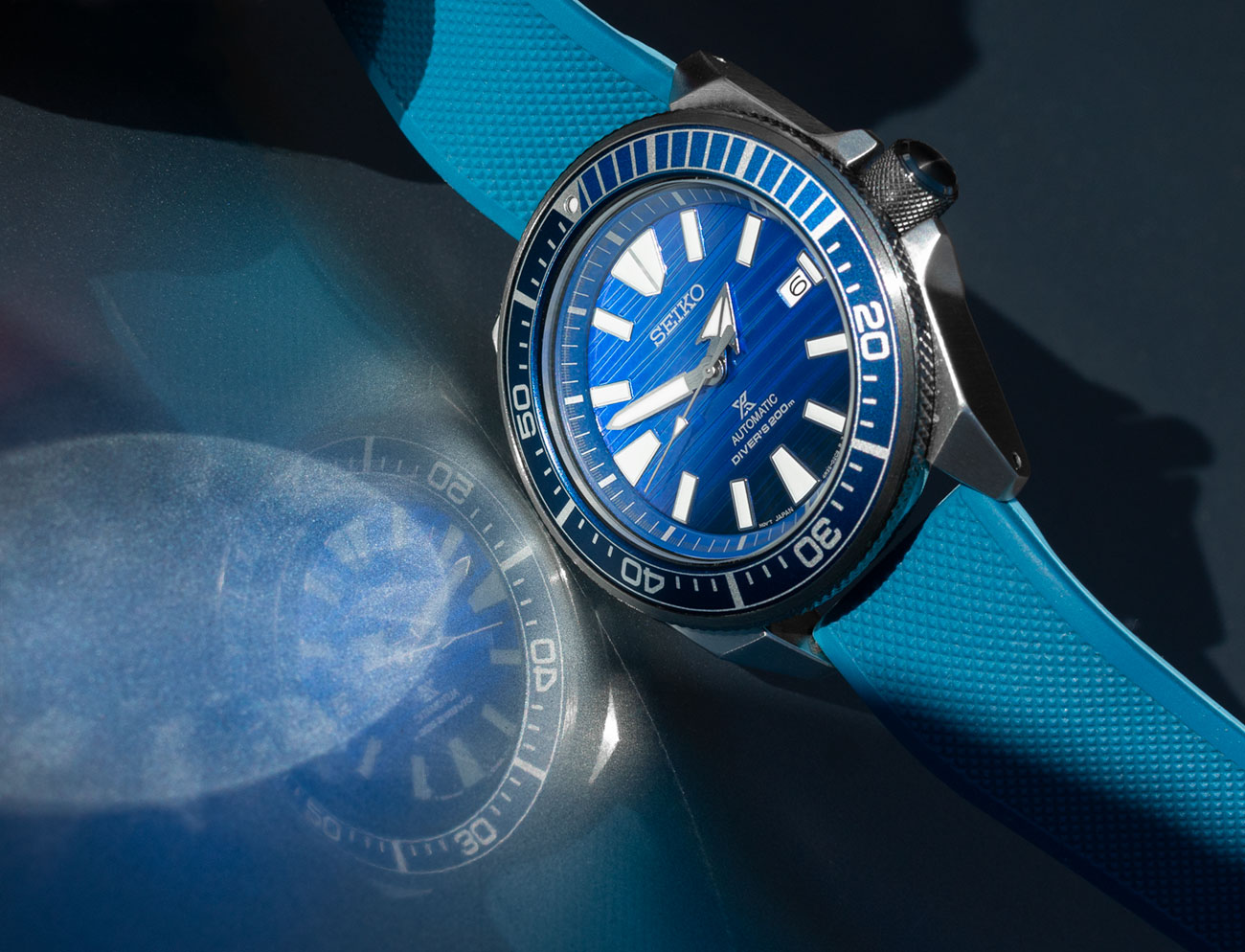 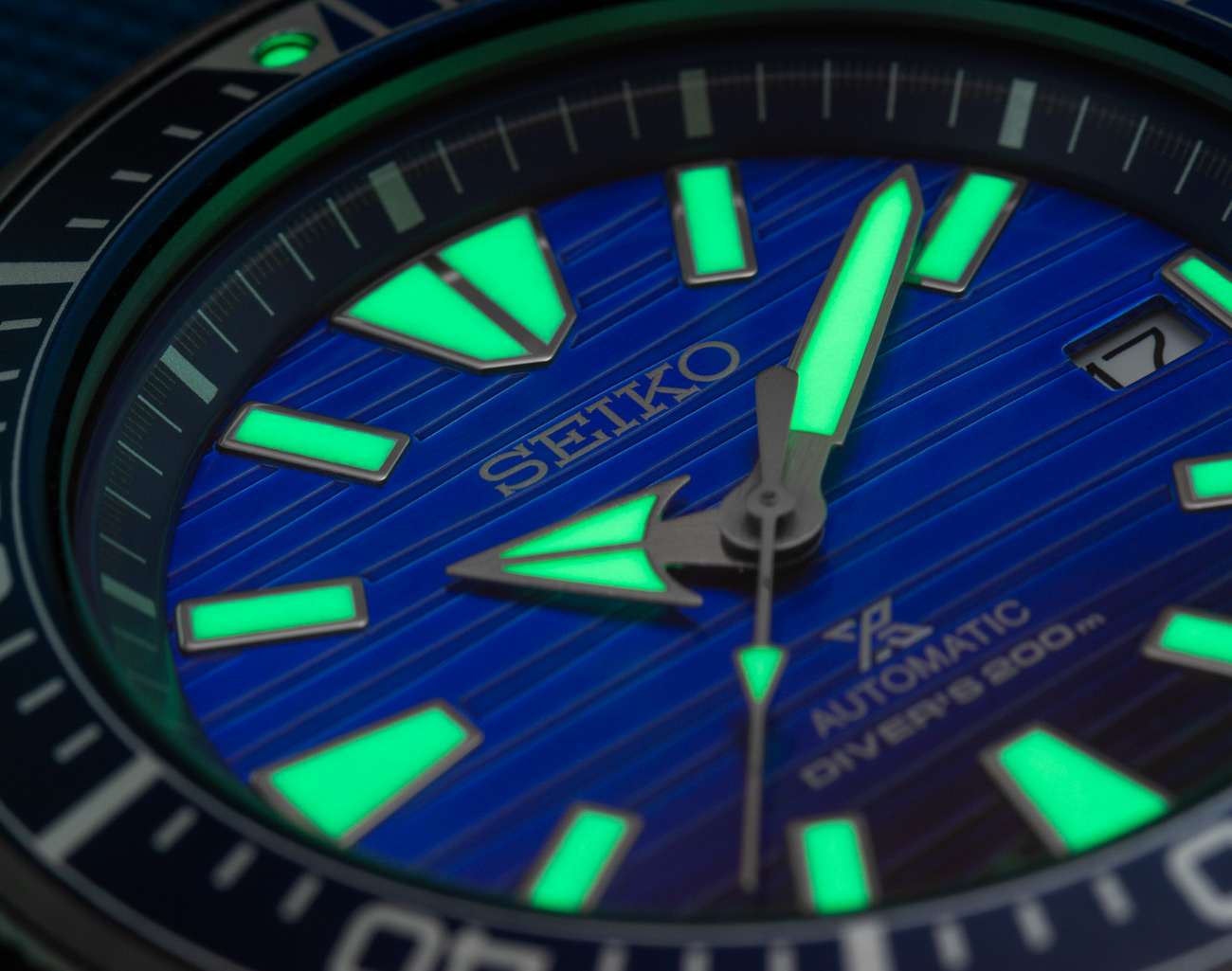 The Seiko Prospex SRPC93 “Save The Ocean” Samurai wears comfortably on my 17cm (6.5in) wrist but chukily, as a dive watch should. The measurements are given as 43.8mm wide and 12.8mm thick, with a dive-ready water resistance of 200m. Seiko reserves sapphire crystals for its more premium offerings, including some in the Prospex line, so the Samurai has a flat Hardlex mineral crystal which still looks pristine after a decent amount of wrist time. It provides excellent legibility – a dive watch requisite – backed up by the LumiBrite-filled indices and hands. The handset is pretty similar to that found on the Seiko “Monster” as reviewed here and other Seiko watches. People say that the minute hand looks like a samurai sword, and this is where then name comes from – it might look like some type of sword, but not a katana that comes to mind for me as a samurai sword. 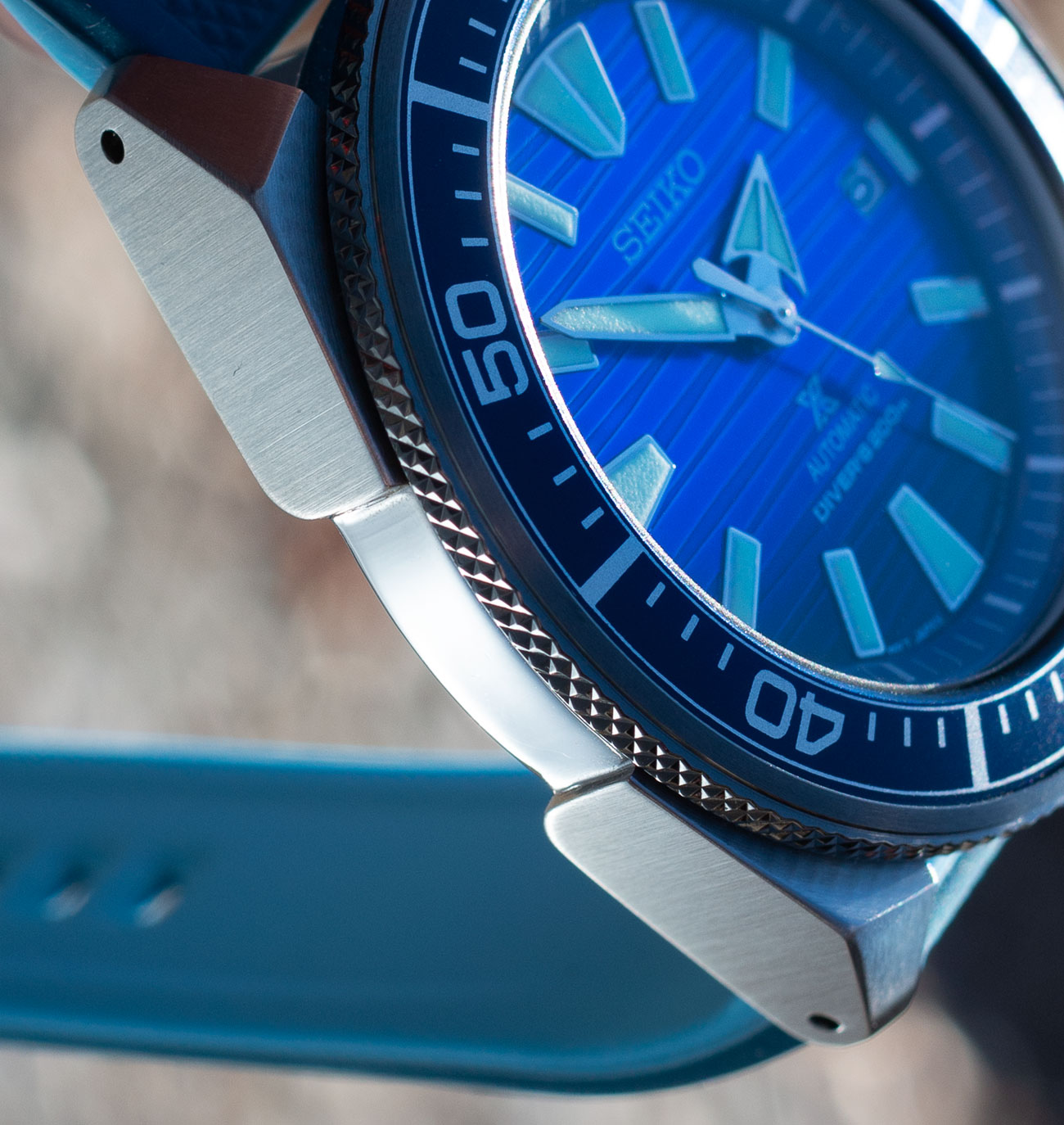 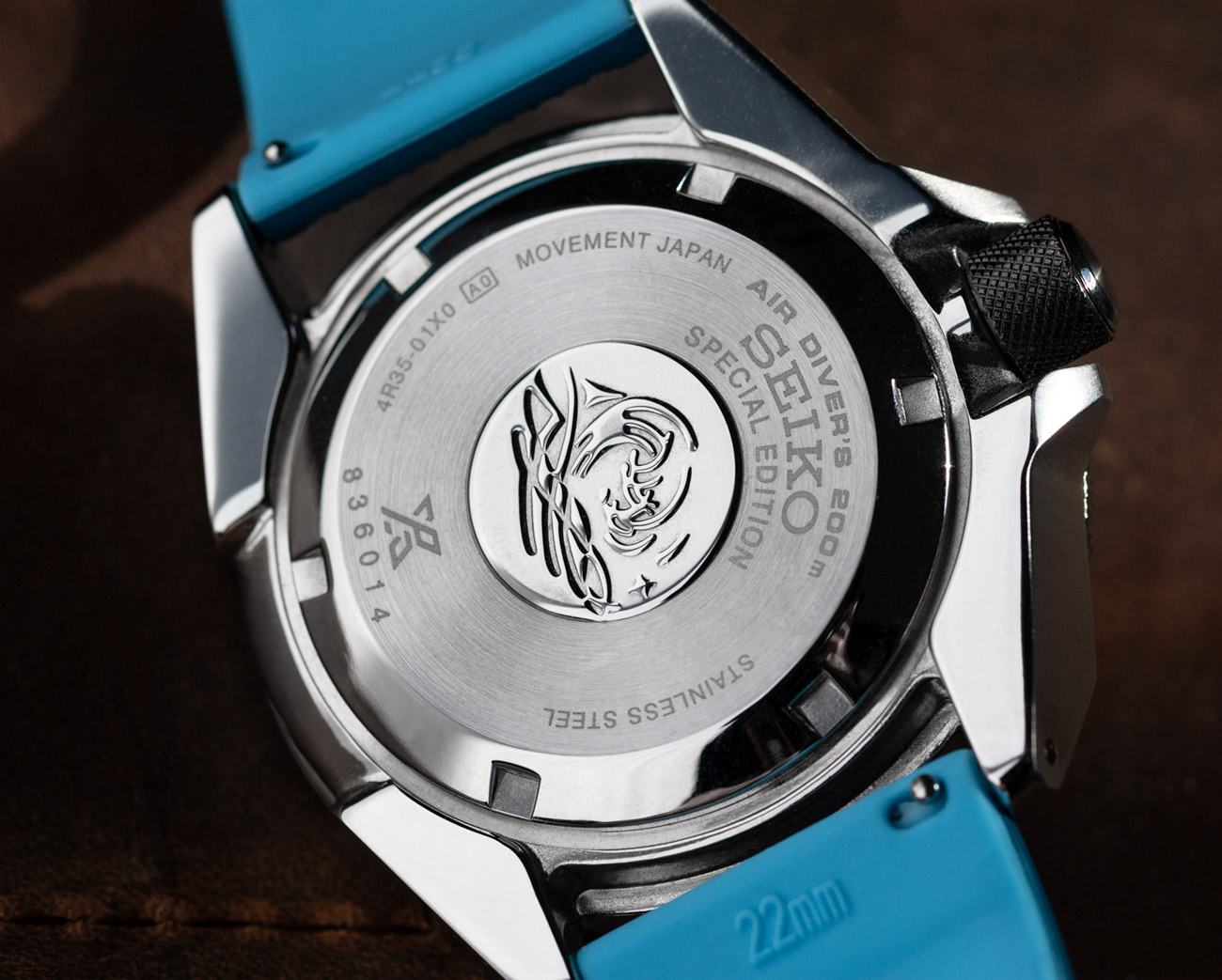 The 4R35 movement inside is not Seiko’s most premium, but it has the modern features that watch lovers expect like automatic winding, hand-winding, and hacking. It operates at 3Hz with a power reserve of 41 hours, and Seiko conservatively promises at least +45 to -35 seconds per day accuracy. Many Seiko watch owners have been very happy with 4R35-based watches over long periods of time and found them to be sturdy and reliable time-keepers. I often like to have a view of what is going on inside my watch, even if it is a movement I’ve seen before, but I am satisfied with a solid case back on a dive watch. Here, it is engraved with the Seiko wave motif. 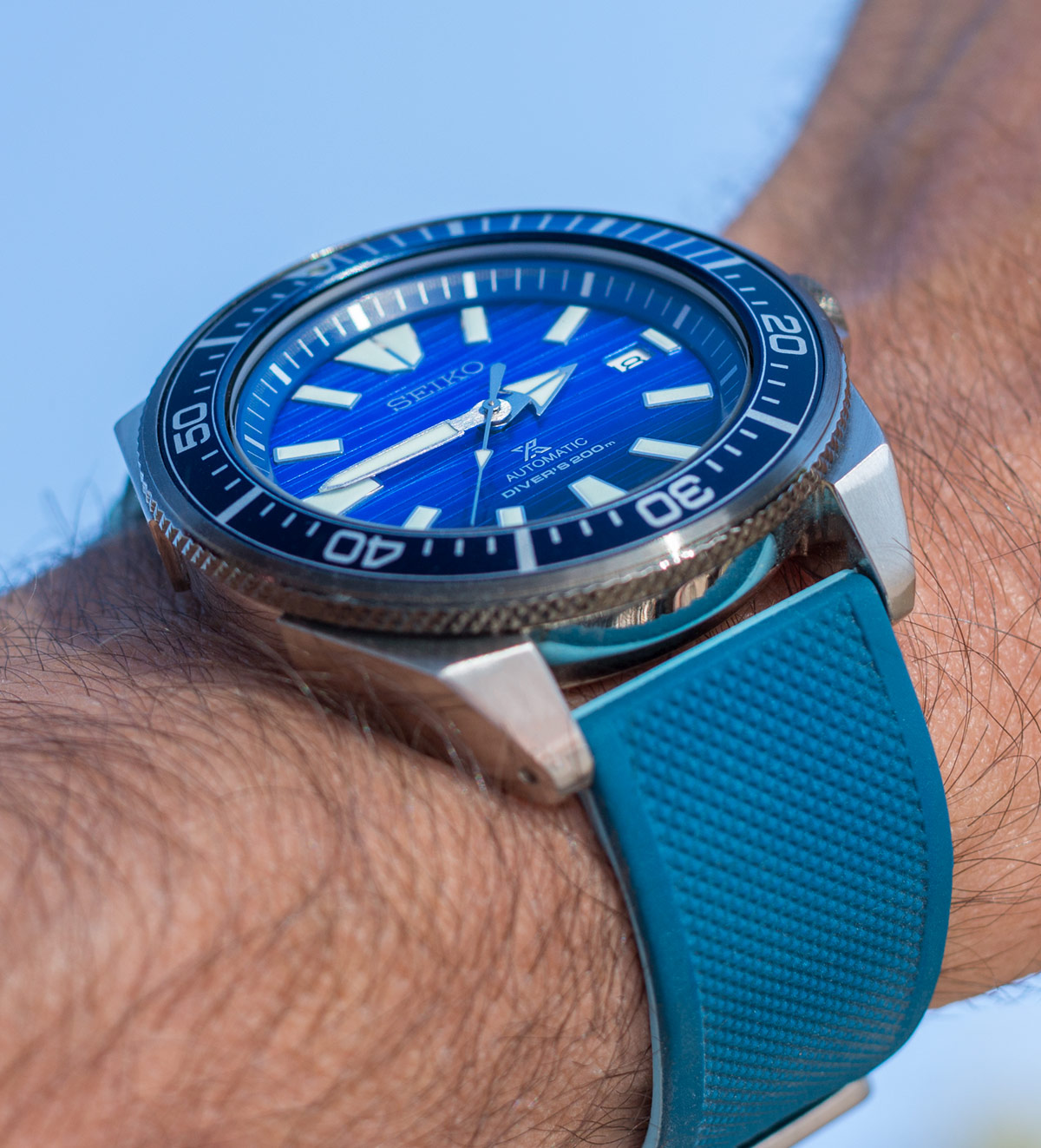 At the same time that the prices and prestige of Japanese watches are increasing, more Swiss (and other) watches are getting more affordable – and small independent brands are pushing the boundaries of value propositions. This is good news all around, but it brings more watches into direct competition with Seiko. Seiko is fighting back with better communications and naming conventions, as well as by listening to fans, responding to market trends (like vintage rereleases), and highlighting their higher-end products (in the Prospex line and elsewhere). There are still not many watches with Swiss mechanical movements available at the price point of entry-level Seiko Prospex watches like the Samurai, but there are some. At $525, the Seiko Prospex SRPC93 “Save The Ocean” Samurai is still a great value, and it offers that certain Seiko personality and appeal that is difficult to quantify or be replicated by anyone else. The Seiko Prospex SRPC93 “Save The Ocean” Samurai is a “Special Edition” and not limited. Learn more at seikousa.com

Necessary Data
>Brand: Seiko
>Line: Prospex
>Model: Samurai “Save the Ocean” Special Edition, reference SRPC93
>Price: $525 USD
>Size: 43.8mm wide, 12.8mm thick
>When reviewer would personally wear it: Basically, any casual occasion when I have a colorful and sporty mood. The beach would be a good example.
>Friend we’d recommend it to first: One who appreciates the Seiko dive watch vibe and heritage but wants a modern, distinctive take on it.
>Best characteristic of watch: Represents the Seiko dive watch personality well, but with a distinctly modern twist.
>Worst characteristic of watch: For the same basic features, feel, and price, it does not offer enough that is different to stand apart from the Seiko Turtle which I find more attractive.