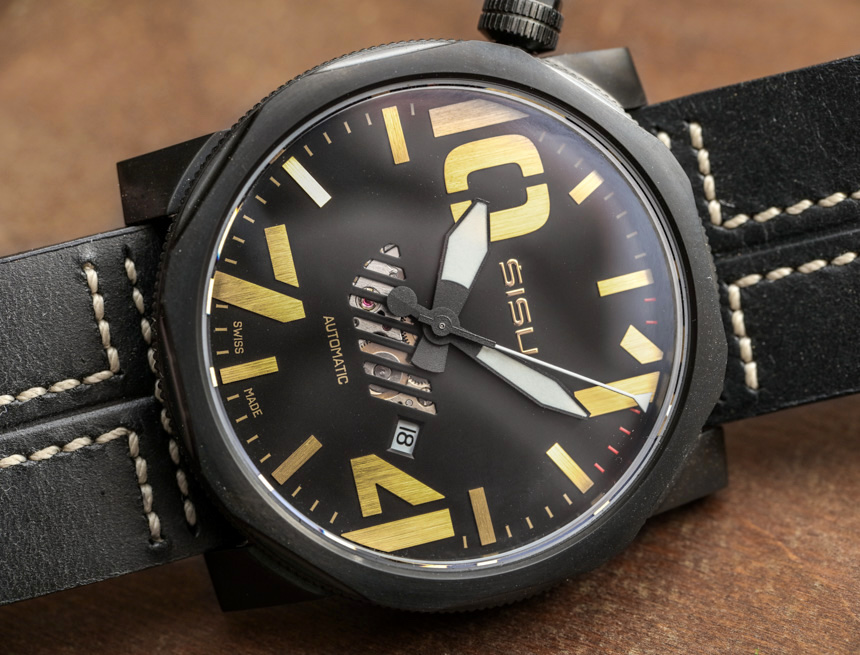 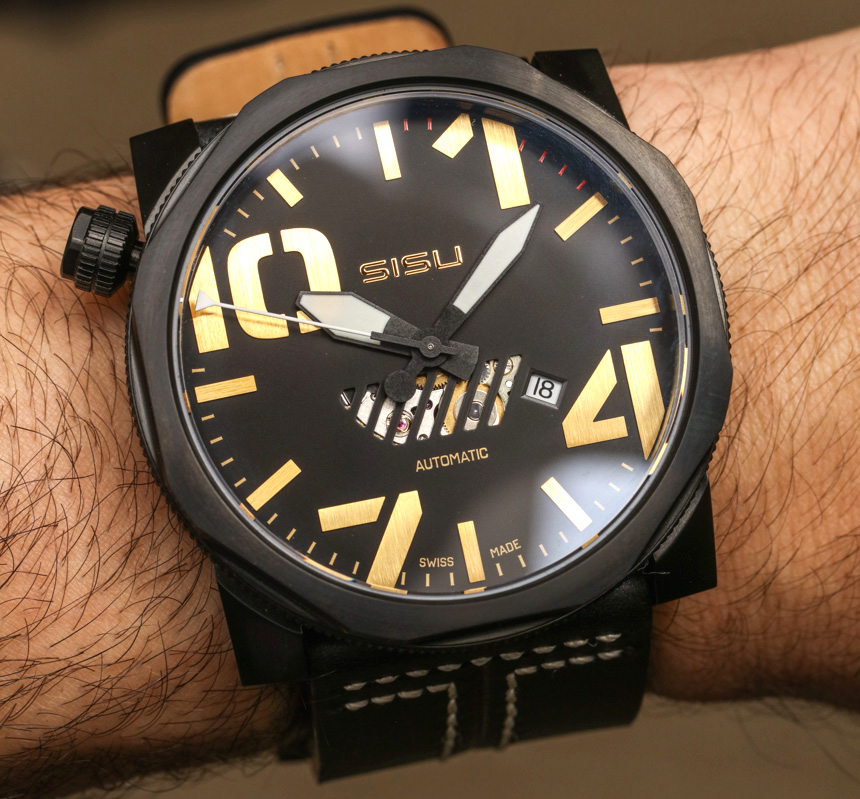 About three years ago, I last reviewed a Sisu brand watch. I have a soft spot for the California-based watch company because of their dedication to being loud. I’m loud, and so are their watches. With that said, I’m not always in the mood to wear a 50mm-wide watch like this Sisu Bravado A6-50 watch – but sometimes I am. Interesting fact that the “newest” Sisu Bravado and Guardian watches are smaller at 50mm wide than before – as they were 55 54mm wide respectively. 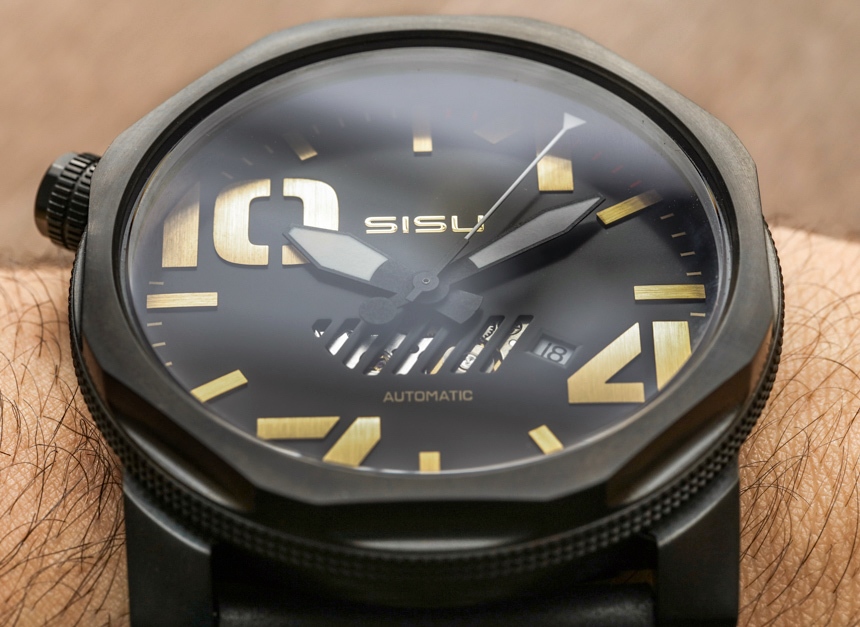 When Sisu first came out, the Bravado was one of their flagship models, and the biggest one at that at 55mm wide. I first reviewed the Sisu Bravado watch here. Later, I also reviewed the slightly (ever so slightly) smaller Sisu Guardian watch here. The purpose of this article isn’t to review it again, but rather to see what my feelings are on the design and big watches overall a few years later. First, allow me to direct your attention to an article I wrote back in 2014 explaining why wrist watch sizes are often so big. Size is a common issue when it comes to watch cases, and it is the subject of much heated debate. 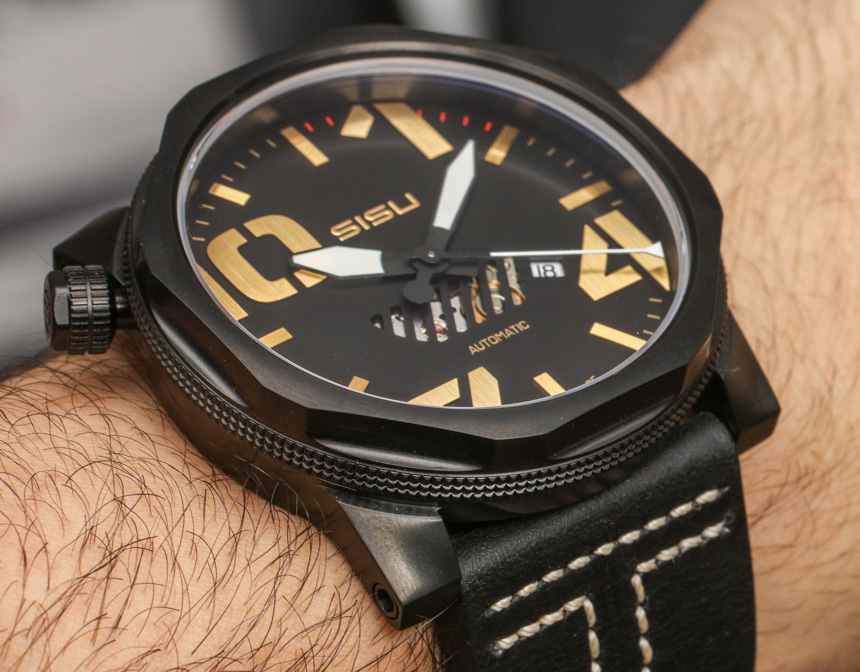 People get legitimately upset when watches are sized too large (for their tastes), and a bit less upset when watches are sized too small (again, for their tastes). There is so much emotion packed into the topic of size when it comes to many products, and it’s still a topic I find quite fascinating. If there is a watch I find too large for my wrist but otherwise like it, then I just say “well that is a shame, but awesome for a guy with bigger wrists.” Likewise, when a watch is too small for my taste I say “too bad it isn’t large enough for me.” Its pretty simple in my head, but not everyone is as calm about it. Even the “big watch maker” Sisu felt the bit reducing the size of its watches to 50mm wide in order to appeal to a “wider audience.” 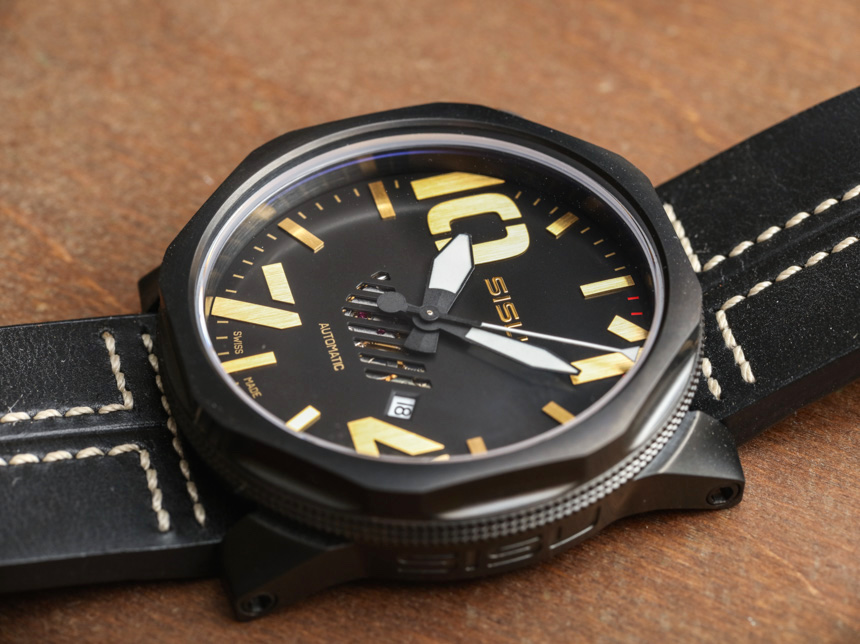 Let me suggest that if you are a “big watch guy” and really want to piss off someone who prefers smaller watches and gets all emotional about it, a Sisu timepiece is probably an excellent choice. That noted, Sisu itself is actually getting a bit sensitive to size. When the Sisu Bravado first came out they wanted to highlight its large size by promoting the allure of a 55mm wide watch. As mentioned above the larger “Valor” collection has been reduced in size to be 50mm wide (not including the crown) – and while it is still big, it is at least wearable now for many, many more wrists. 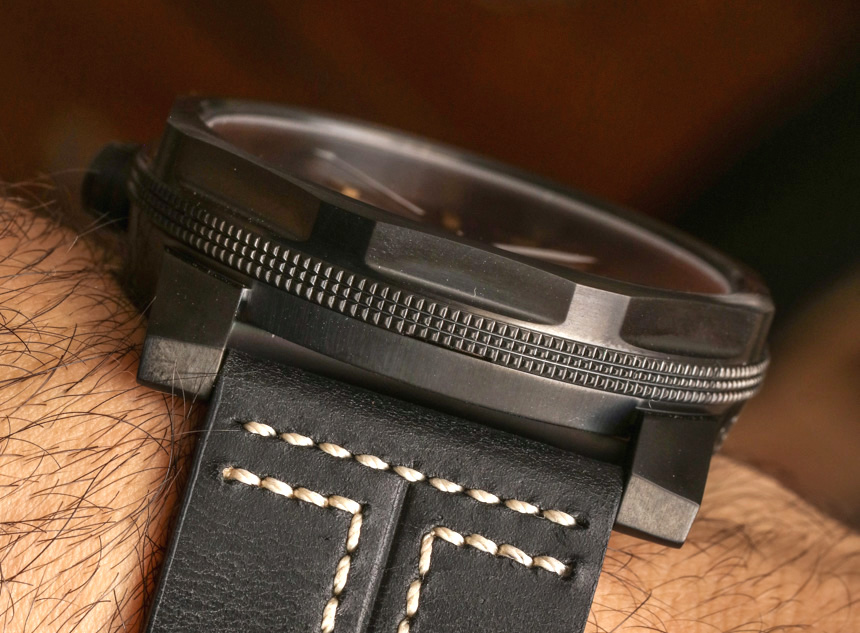 Technically speaking many people wear a watch this size without complaining. Most Casio G-Shock watches are about this big, though people don’t notice them due to their lighter weight. The Sisu Bravado is in steel (here PVD-coated black) and available on a matching all-steel metal bracelet. That is how to get a sizable watch with a sizable weight. The bracelet is 30mm wide, which is larger than the case width of many women’s watches. 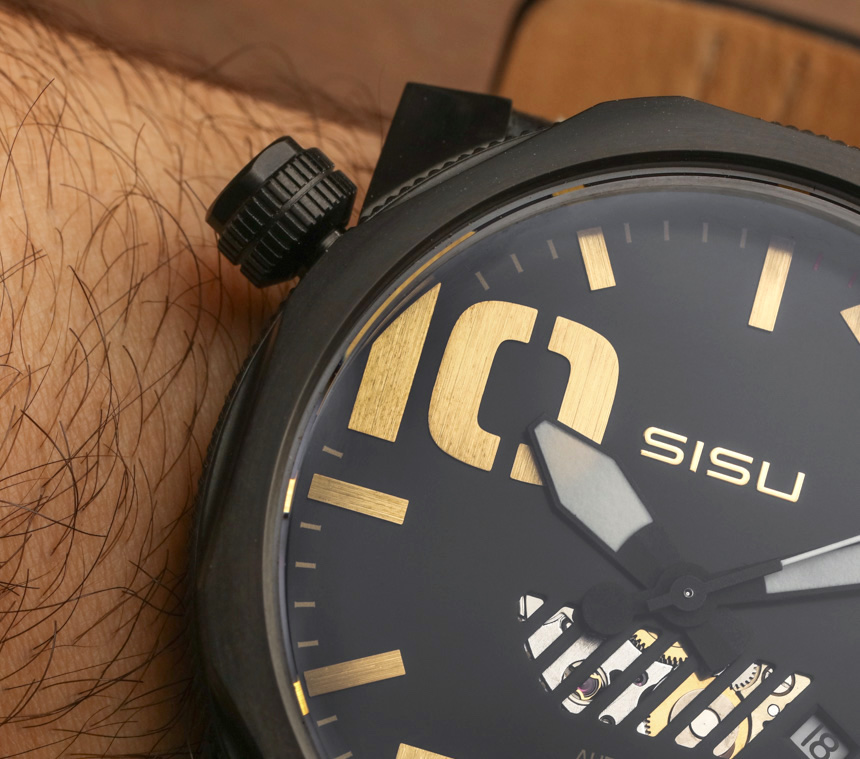 I can pull off the Sisu Bravado on a bracelet, but I prefer their Guardian model for its overall wearing comfort. The Sisu Bravado A6-50 on this leather strap isn’t bad, actually, and the cool stitching helps. This model is the A6-50, and it is apparently a limited edition, even though I am not sure of how many. The matte black case actually helps to minimize the visual mass, and the brushed gold-toned hour markers are a nice touch. Some Sisu watches have skeletonized hands that I don’t always like, but this model has large, almost pilot-style hands which are coated with luminant and pretty easy to read.

On the bracelet, the Bravado weighs over a pound, I believe, but that is less on this strap, of course. I actually want the brand to make a cool rubber strap and produce a diver version of this, as I think that would not only make sense given the theme of the brand, but also look sort of cool. The round case is 16.2mm thick and water resistant to 100m. The design has a knurled inner ring, and the bezel is actually geometric in shape. Over the dial is a large (obviously) AR-coated sapphire crystal. 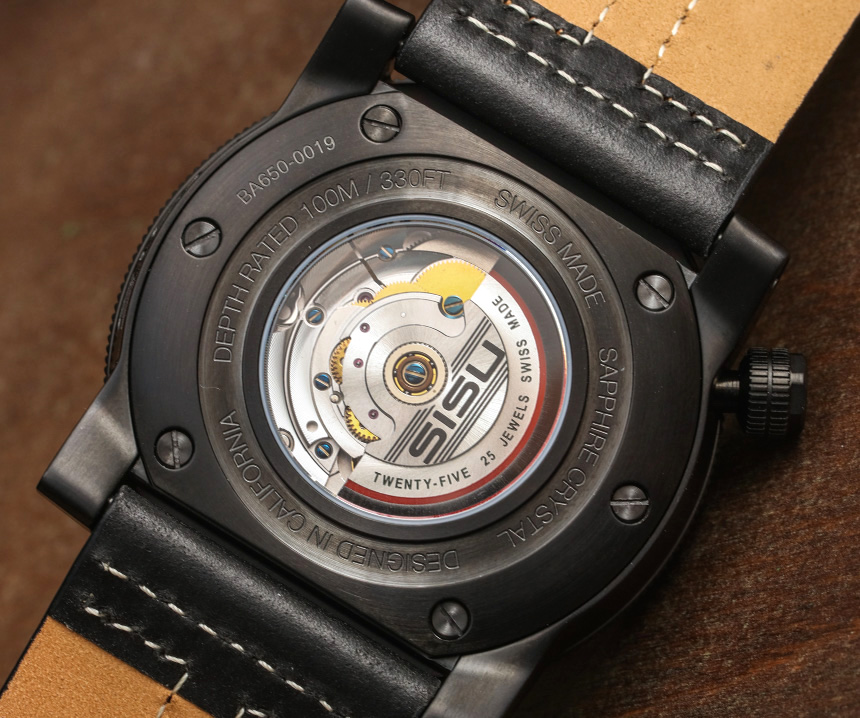 Intentionally modern with a “designer” flare, the Sisu Bravado clearly isn’t for everyone, but it also tries to satisfy watch snobs. Visible through the exhibition caseback is a Swiss ETA 2824 automatic mechanical movement – which only seems to take up half of the space back there. It looks as though Sisu could have stuck two movements in there if they liked. Sisu does have some Swiss quartz watches also available in other timepieces collections which are half or one-third the price. 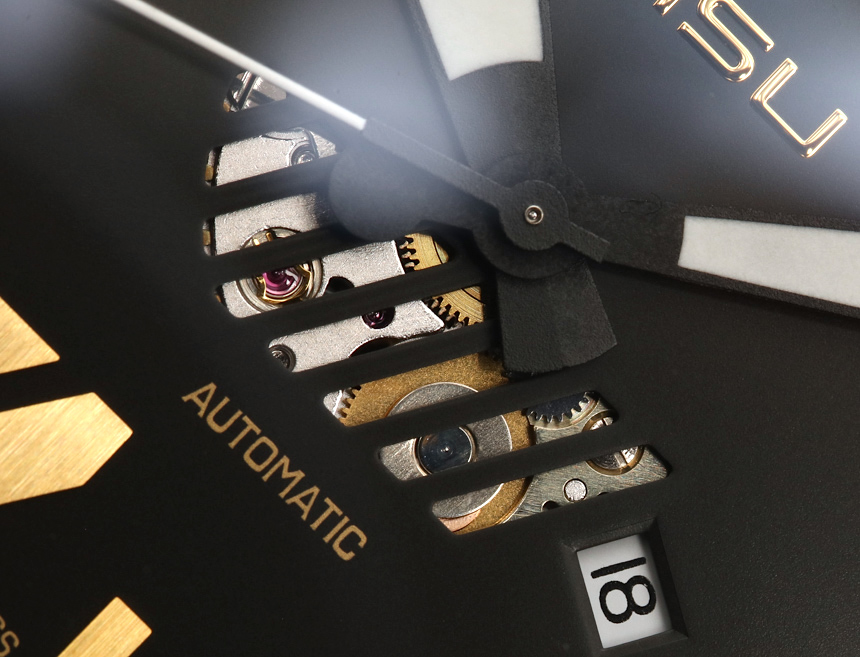 On the dial, a small “grill” cutaway offers a peek at the movement, which is a nice touch. The good news about having such a large case is that implementation of the date doesn’t cut off any numbers. Then again, by design the hour numerals are actually cut off on the face… The date is fine, but I think that Sisu should have tried to give the date disc a black color to match the face as it may have resulted in a more elegant look. 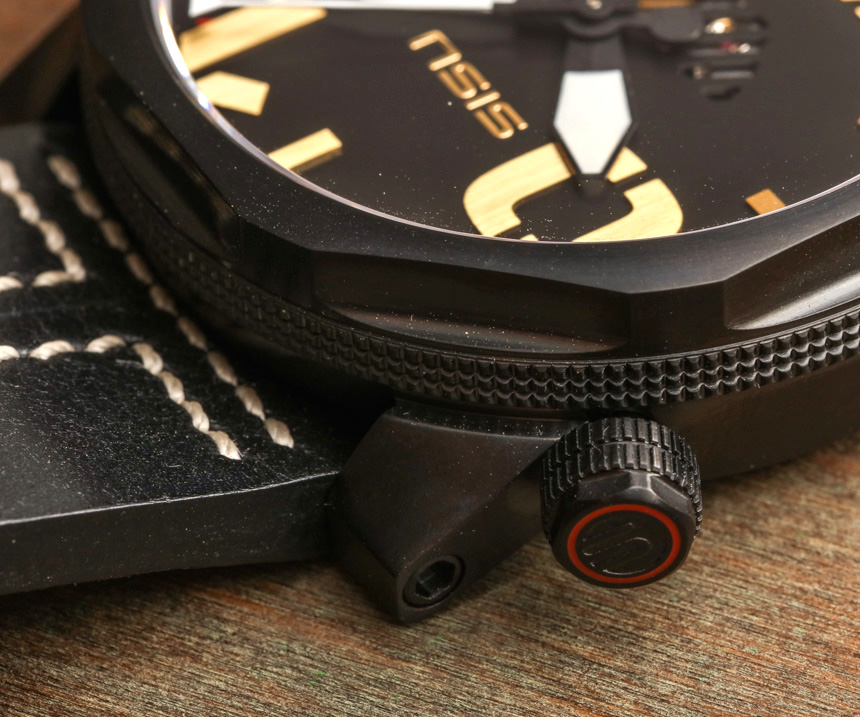 Wearing a massive black watch with a bit of “blingy” gold isn’t for everyone, as I mentioned. Sometimes its good to go bold, though – at least for me. On my modestly sized wrists, the Sisu Bravado A6-50 doesn’t look silly – but then again, I’m not seeing myself from far away. Others who have worn it also mention that the large size becomes something they forget after wearing it for a little while. Part of this is due to the relatively stubby lugs which act to reduce visual wearing mass on your wrist. 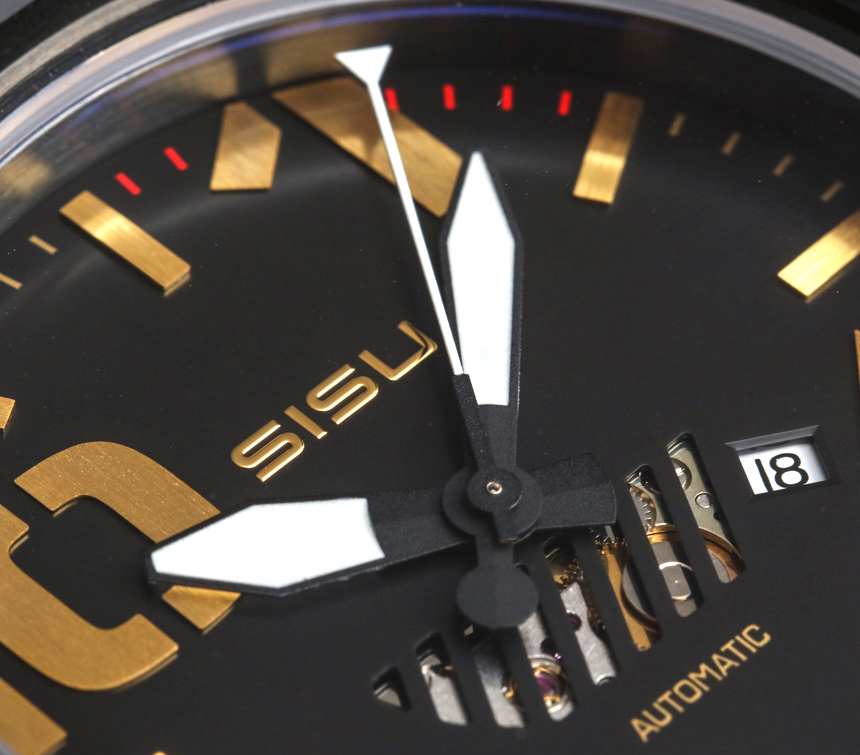