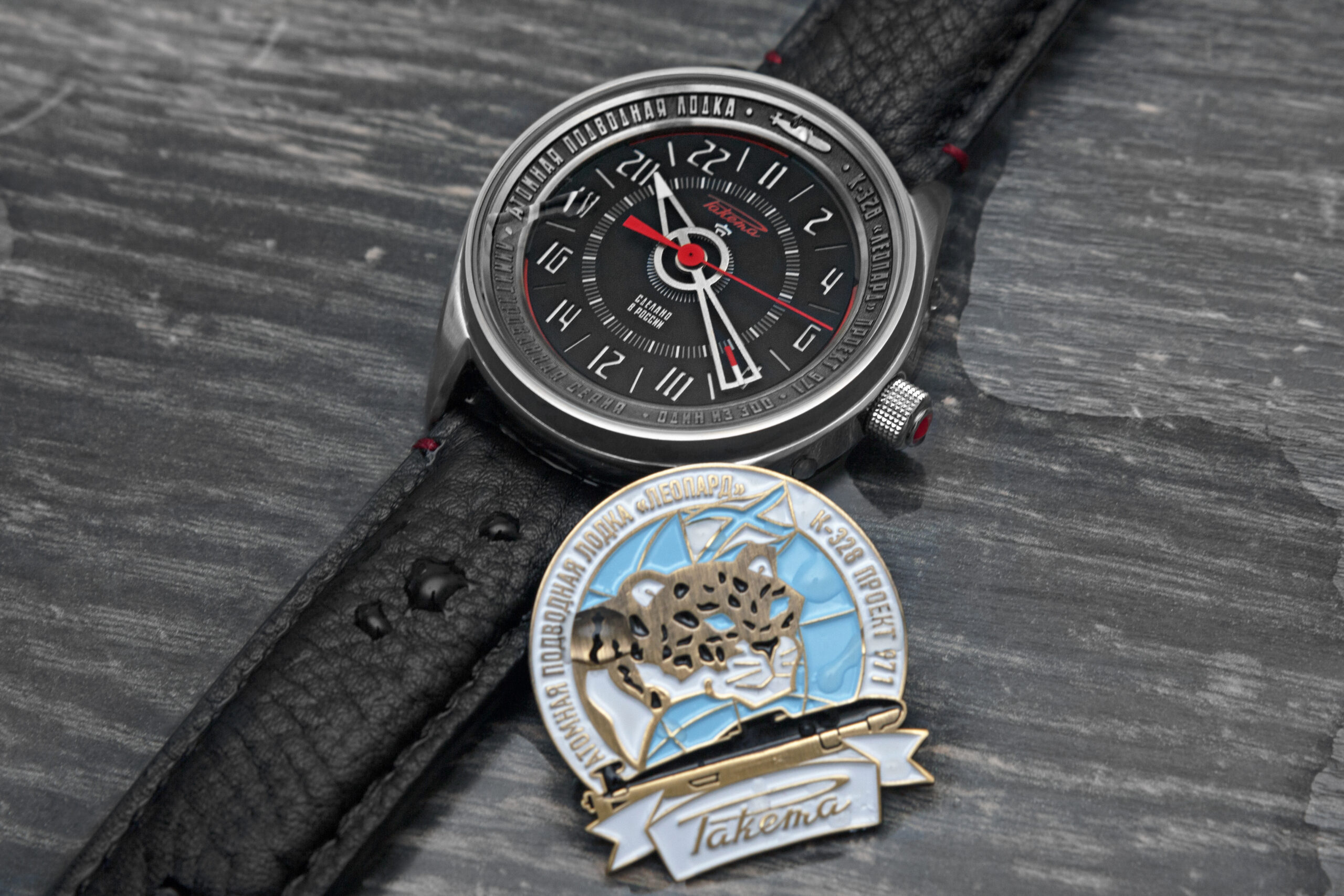 Submerge Yourself In Soviet History With Raketa’s Leopard 24 Watch

23 Comments
by SponsoredPost
Sponsored post presented on aBlogtoWatch for advertiser

Russia-based watch manufacturer Raketa is no stranger to fascinating and unusual complications that stand out among the competition. From a celestial-themed timepiece whose hands move counter-clockwise to its bold “Big Zero” model that features large, Arabic numerals that are impossible to miss, it seems each model has an unmistakable calling card that is uniquely its own. In the case of the new Leopard 24 timepiece, it takes a thorough deep dive to fully fathom the depths Raketa went to in order to maintain a consistent Soviet submarine theme. 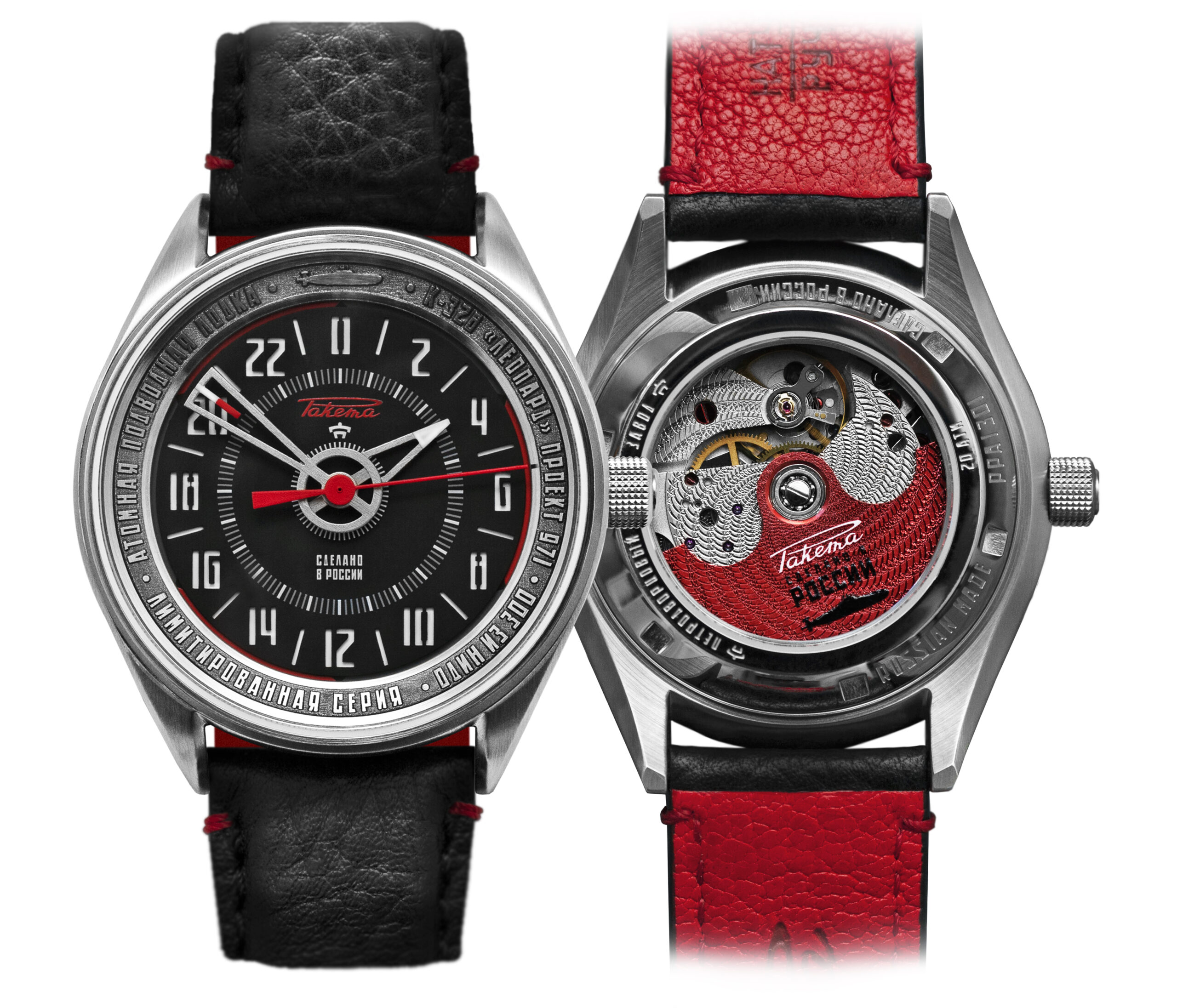 Looking at the cast and characters in the Raketa lineup, both past and present, it is evident that this is a company quite proud of its heritage — and for good reason. In the tapestry of Russian space travel, there is a particular thread that honors Cosmonaut Yuri Gagarin and his iconic spaceflight that led to the creation of the Raketa brand itself. A sister brand, Podeba, was worn on Gagarin’s wrist as he launched into space. You could say that Raketa has focused on incorporating specific tool functions into timepieces ever since.

Raketa’s factory is located in Saint-Petersburg, just a stone’s throw from the Baltic Sea. It is fitting, given this proximity, that there are historical ties between the company and Soviet maritime operations. Making a watch for naval personnel, particularly those aboard submarines, requires special consideration. It is commonplace for submariners to work at-depth for months at a time. In the confines of these ferrous behemoths, space is limited, and it can be a challenge to discern day and night. When time begins to blur, a watch becomes far more than a luxury; it becomes a necessity — a comrade upon which each individual entrusts their most valuable asset. 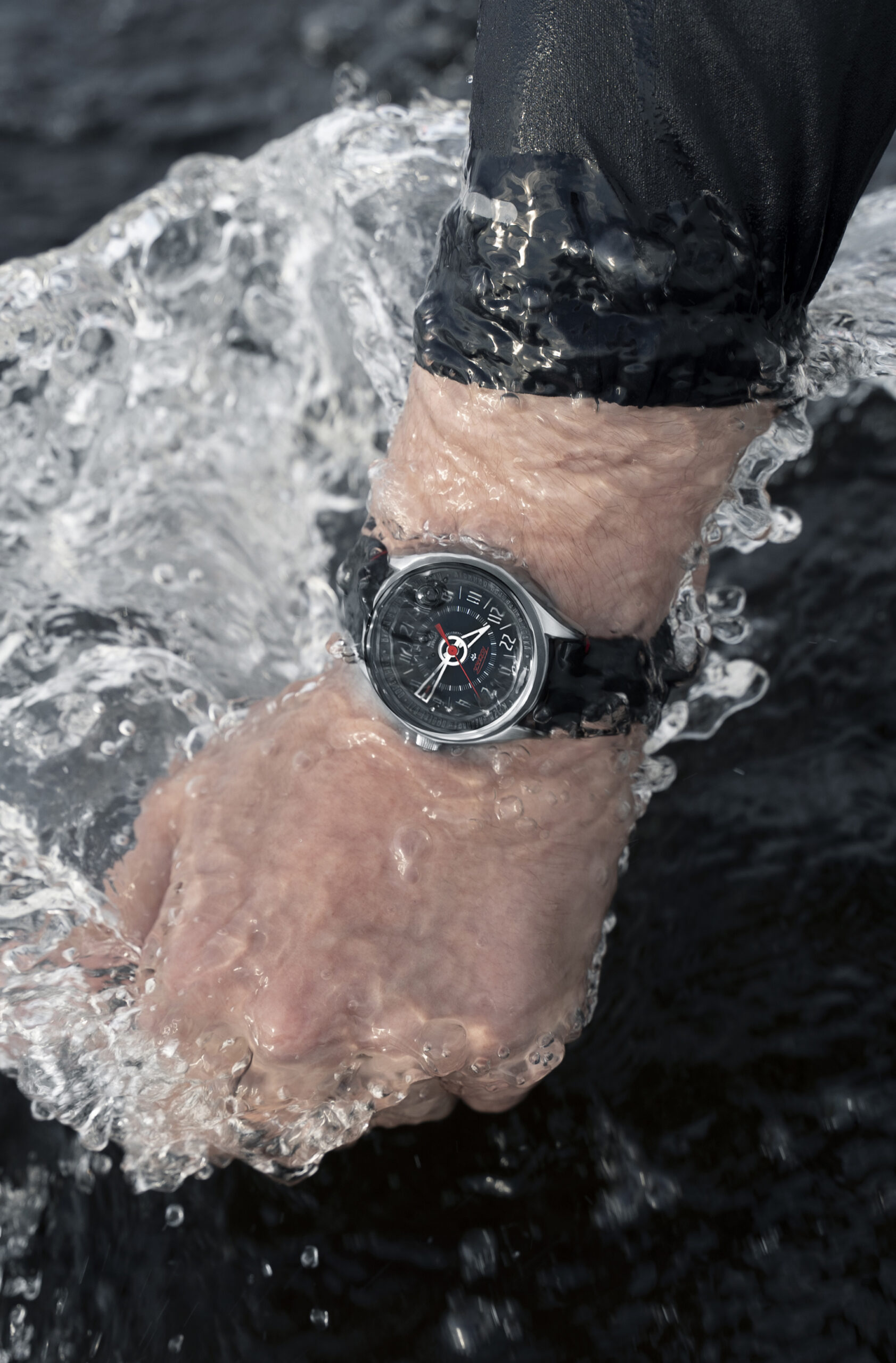 In order to create the Leopard 24 and ensure that it retains truly function-forward features, Raketa sought guidance from a man who knows better than anyone. Captain Valery Dyakonov has a storied past with Russian submarines, specifically the Akula-class Leopard SSN after which this novel timepiece is aptly named. The SSN designation denotes that the Leopard is a nuclear-powered attack submarine. Captain Dyakonov was responsible for supervising the pre-launch stages of the Leopard. After conducting all necessary sea trials, he fulfilled the role of Commander and took to the high seas. He held this role until 1996 and then, over two decades later, had the opportunity to share his expertise and imbue a bit of the submarine into the Leopard 24 timepiece. 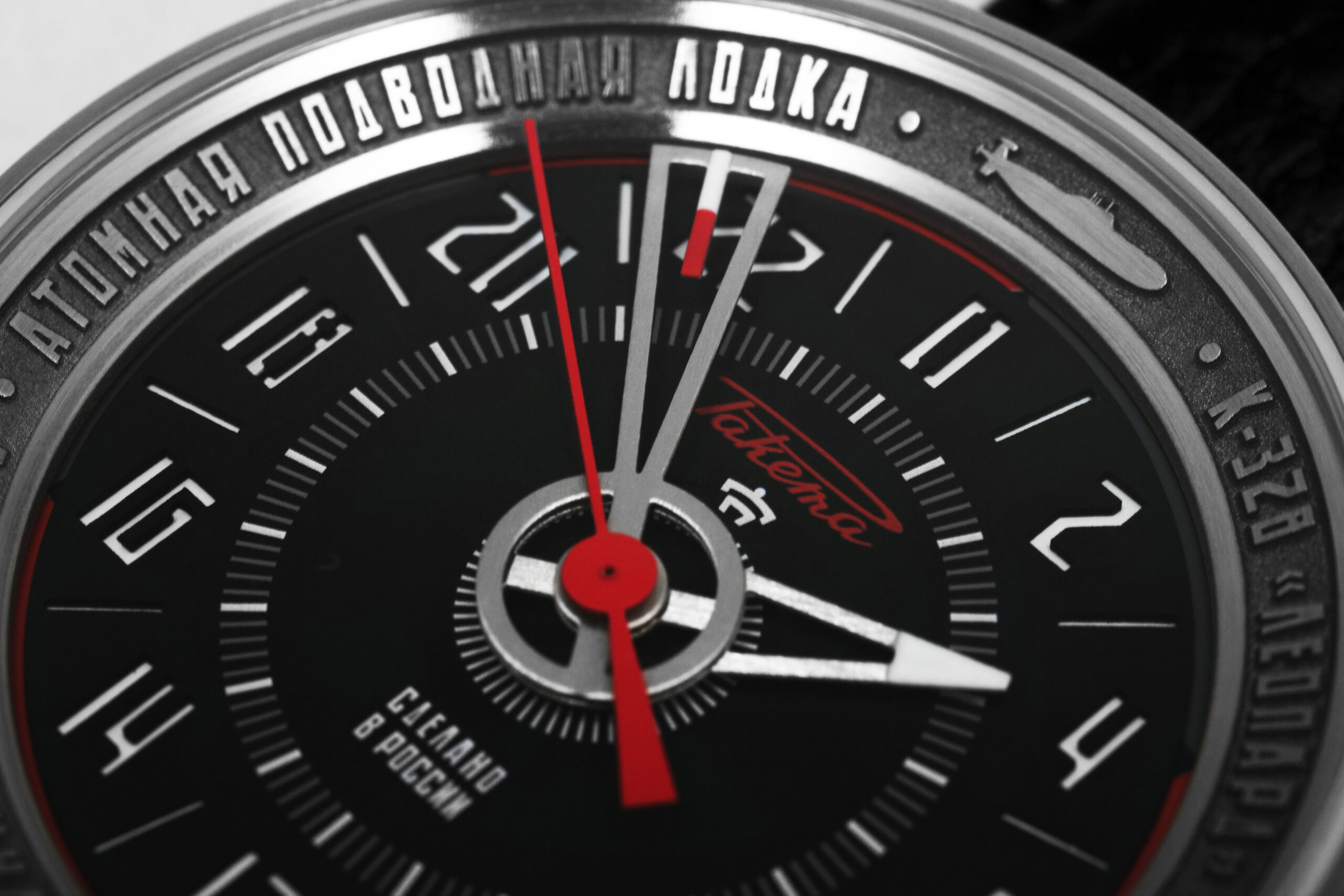 To state that the original Leopard SSN submarine and this watch share the same DNA is, in this case, quite literal. The Raketa watch factory was given steel from the outer hull of the Leopard K-328 by a local shipyard that is currently responsible for its overhaul. Each of the 300 pieces made features a bezel comprised of this submarine-grade steel. The stainless case of the Leopard 24 measures 44mm in diameter and stands 14.25mm-thick. A robust, knurled crown protrudes at 3 o’clock to make for easy operation. A sapphire crystal is used to protect the dial and provide a view through the caseback. This shows off the handmade omega waves that decorate a number of movement components and the crimson hardware that matches the red and black theme of the dial. The dial of the Leopard 24 is packed with features befitting submarine personnel. Working on a 24-hour rotation, the military-time, Arabic numerals are bold and lumed for easy reading. The hands are reminiscent of the gauges found in Soviet subs and provide solid contrast against the black of the dial. The entire bezel is encircled by a chapter ring comprised of metal pulled from the hull of the Leopard K-328. Just inside this chapter ring, opposing lines of red and grey can be seen forming six distinct sections. Each of these specified time periods is four hours in duration, effectively allowing naval officers to track their shifts. The overarching red and black theme throughout the Leopard 24 is more than meets the eye. Although it is both great for legibility and a timeless color combination, the meaning transcends the obvious; these colors are identical to those found on the submarine’s hull: black for the top and red for the bottom. This can also be seen in the bi-color leather strap that comes standard on each timepiece. 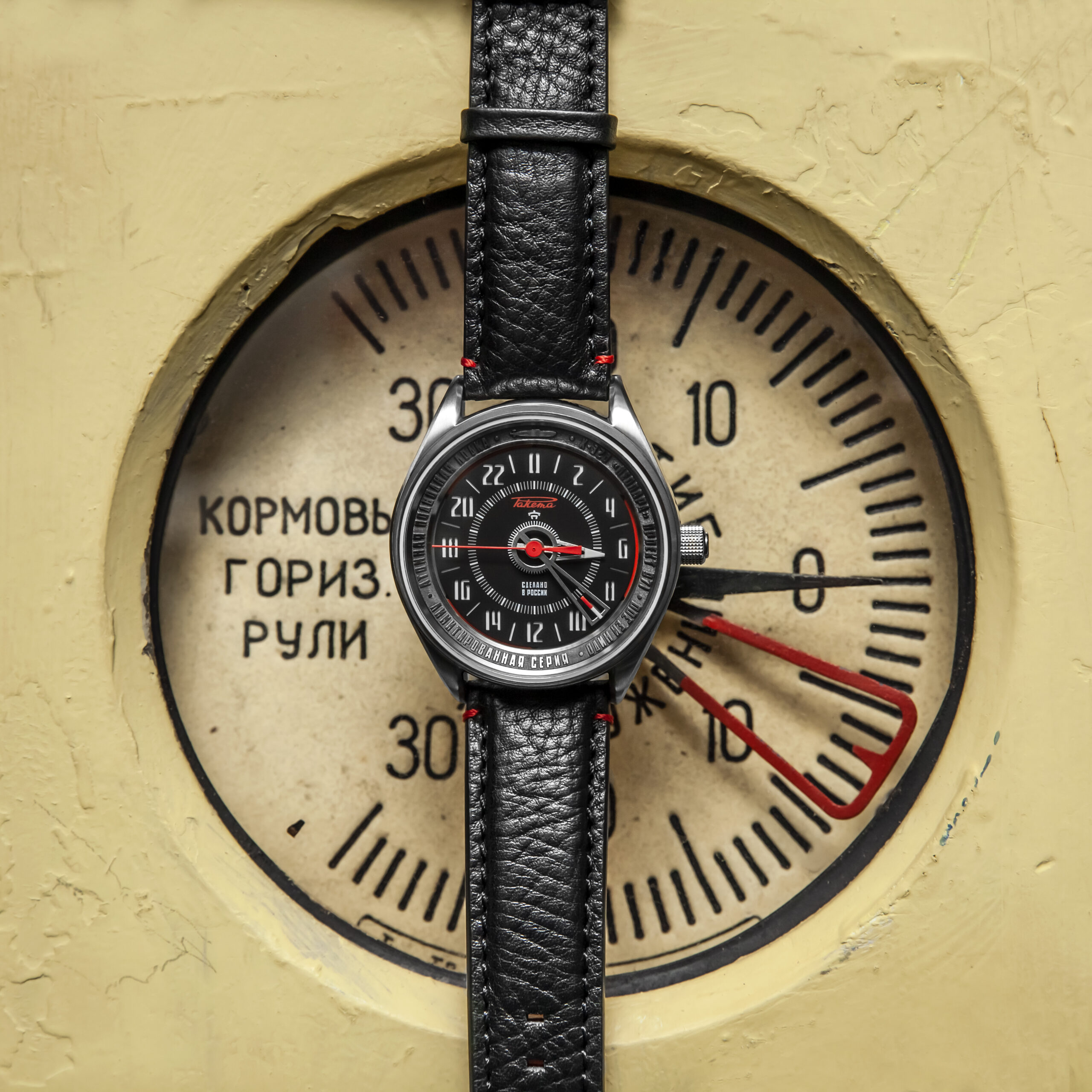 The powerhouse within the Leopard 24 is the automatic 2624A caliber. This purpose-built 24-hour movement buzzes along at 18000 beats per hour and features a bi-directional rotor that doubles the winding efficiency of the watch — a useful feature for submariners and desk-divers alike. Each Leopard 24 comes with a box, additional rubber strap, branded springbar tool, and a certificate authenticating the use of Leopard K-328 steel. This denizen of the deep retails for the preorder price of $1530.58 USD (1,292 EUR without VAT) and includes free delivery worldwide. Whether you choose to spend your time cruising through the mesopelagic zone in a submersible, or you prefer a bit more breathing room lying by the pool and reading adventure novels, the Raketa Leopard 24 is prepared for your mission, whatever it may be.