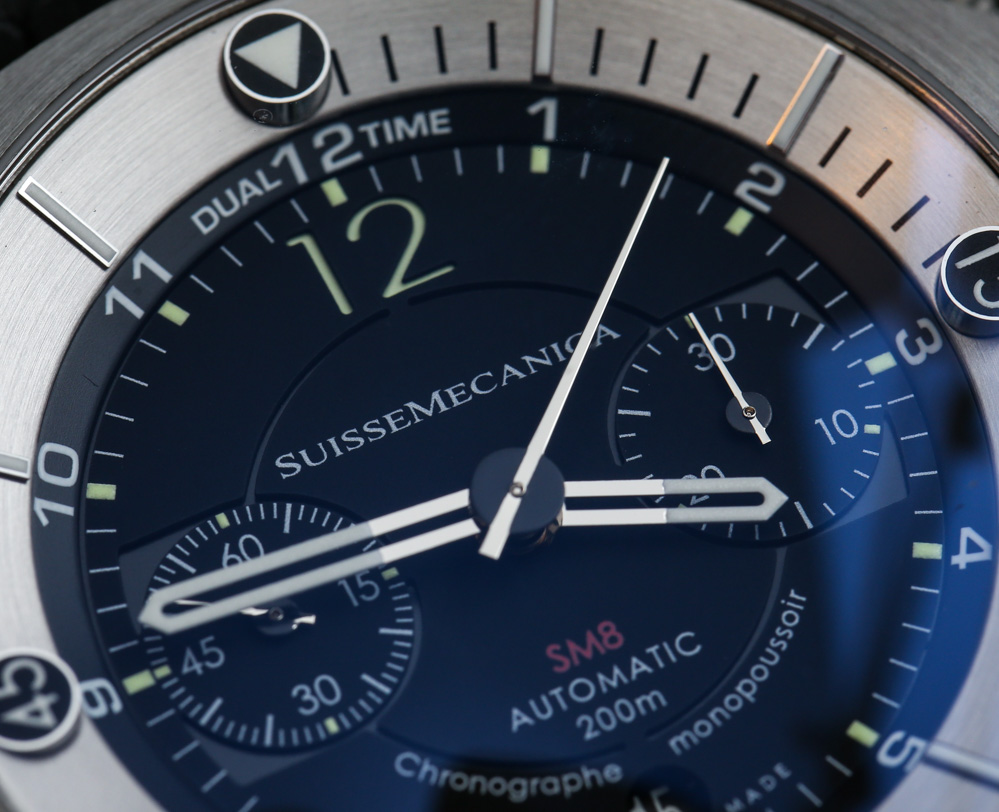 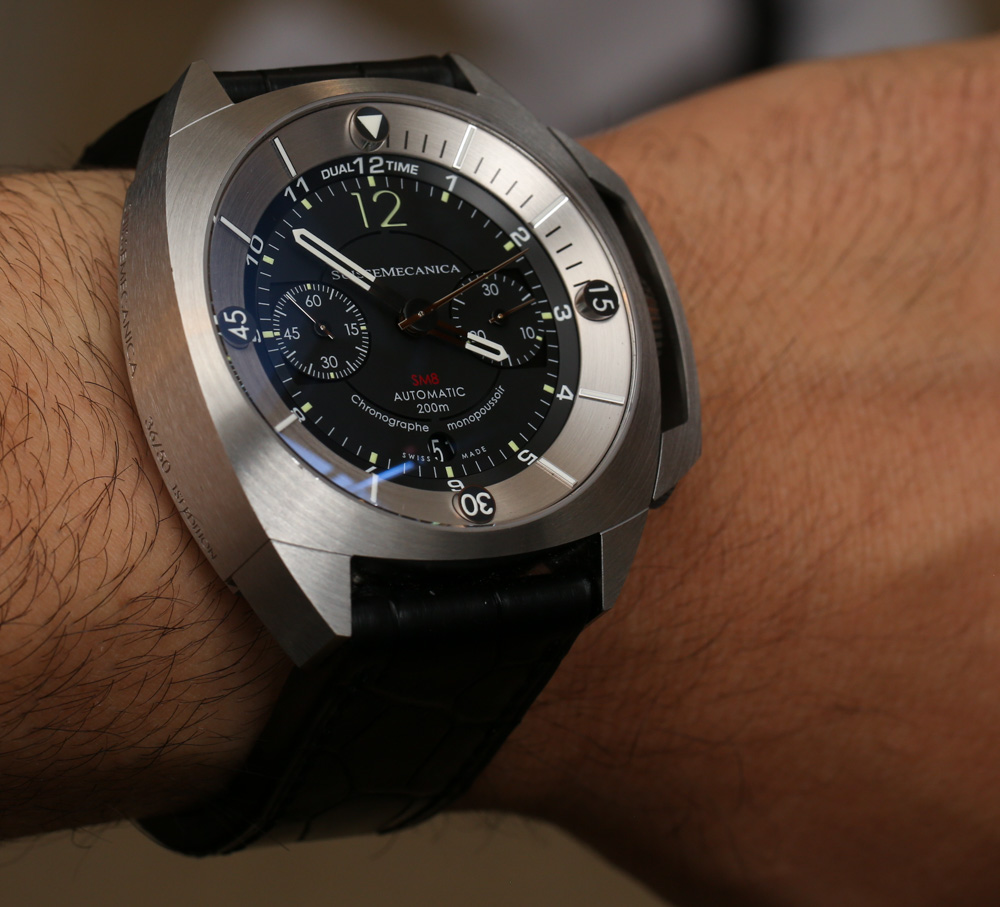 Modern in design with all the hallmarks of a traditional mechanical sports watch, the SuisseMecanica SM8 Chronograph collection is a rare breed of thoroughly Swiss timepieces – which, of course, are accompanied by a corresponding price, as well as requisite level of exclusivity. If you’ve never heard of this model or the brand in general, you’d be easily forgiven. Based in La Chaux-de-Fonds, Switzerland, the micro-brand of luxury sports watches is boutique at best, and the brainchild of a talented and charismatic husband-and-wife team consisting of Francois and Juliana Renoult. 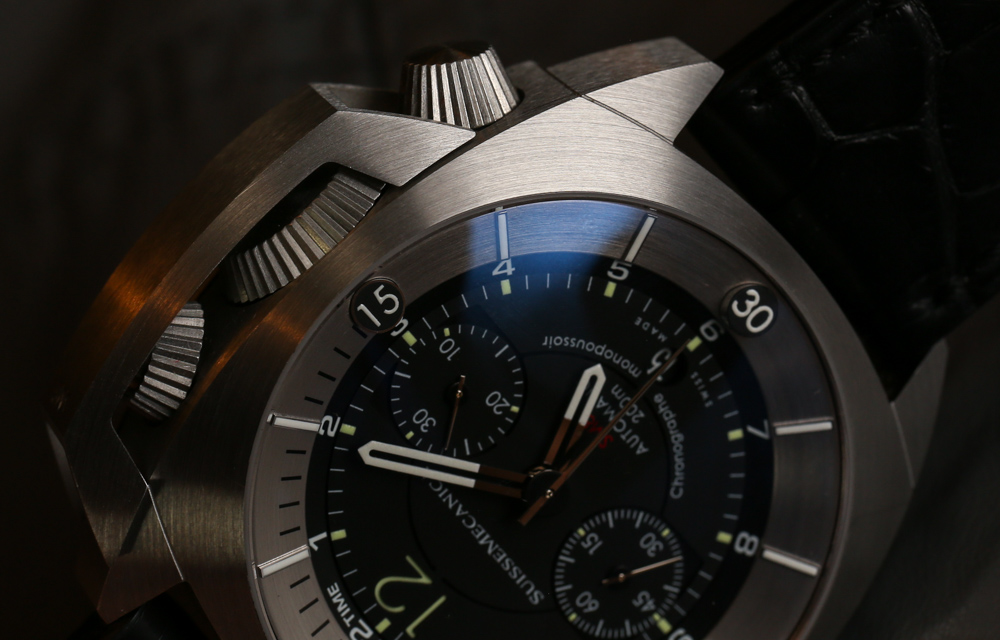 As far as I know, the brand continues to produce in small quantities two versions of their SM8 watch, each with a few different color and finishing variations. In fact, each version of the watch is a limited edition of only 50 pieces. There is the base SM8 which is a three-hand automatic, as well as this SuisseMecanica SM8 Chronograph which adds to the intriguing design. While at first glance the SM8 looks like a Panerai from the future, it carries with it some interesting features and quirks which help make it a darling of certain niche collector circles.

I’ve been attracted to the SuisseMecanica SM8 Chronograph since I first saw it years ago and have been lucky enough to have one for a while to slowly review. While the watch is not perfect, it does have a genuine design elegance and beauty which – in addition to a welcome “function-first” design ethos – helps make the watch highly endearing despite a few flaws in the design.

A quick note on the pricing, which at first glance will seem high when you discover it below. No doubt, the SM8 collection does come with a high price, but at least there is a reason for it beyond the fact that these are limited edition watches. SuisseMecanica wanted its watches to have “100% Swiss Production.” That means more than mere “Swiss Made,” but rather that each of their timepieces is fully designed, produced, and assembled in Switzerland. I can’t personally attest to the accuracy of this statement, but I don’t see any reason for the duo behind the brand who are friendly and genuine in their demeanor to be misleading in this assertion. Moreover, this isn’t the only time I’ve seen a timepiece such as this with such a premium simply because it was produced entirely in Switzerland with all-Swiss parts. Anyone who has traveled to (or purchased anything from) Switzerland knows just how horrifically expensive the place is, and that isn’t just for foreigners, but for locals alike. Thus, Swiss components and labor are among the most expensive in the world (why do you think the watch industry gets so excited about producing parts elsewhere?). 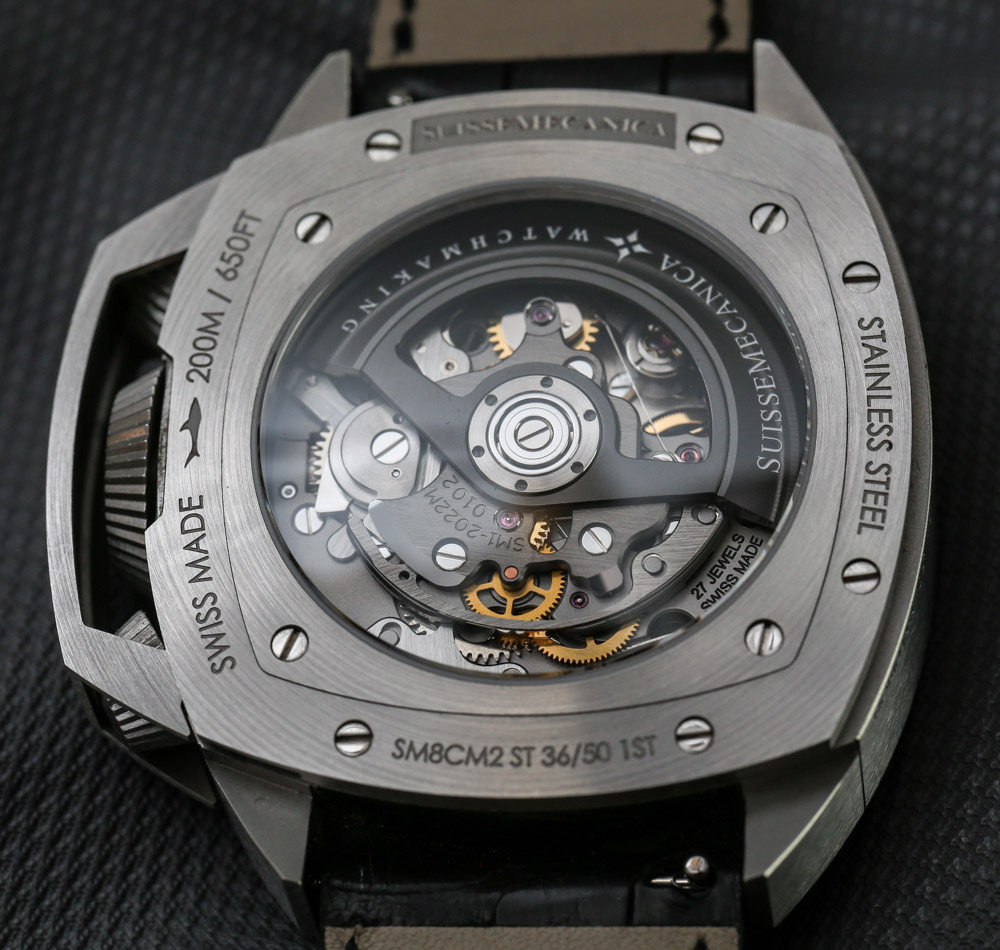 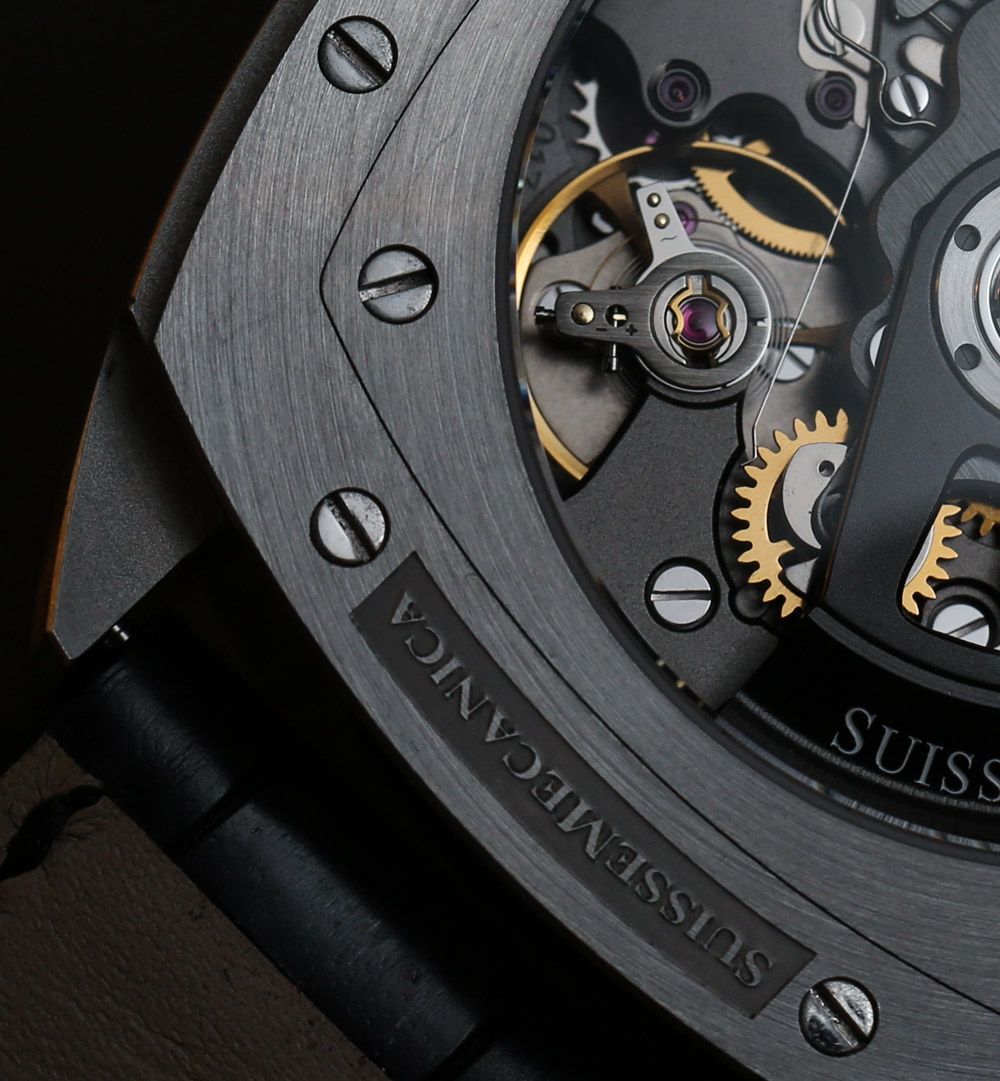 SuisseMecanica points to concept cars and technology of the 1970s as the primary inspiration behind the design. While the watch feels a bit more modern than that, I actually understand exactly what they are talking about. Ironically enough, while having the SuisseMecanica SM8 Chronograph watch for review, I received an amazingly cool gift from a friend (which is a serious must-have book for any car lover) precisely on the topic of 1970s concept cars called 70s Concept Cars: Yesterday’s Dreams of the Future. In the book, I realized that, in fact, 1970s sport concept cars were amazingly sharp in their angles with futuristic, yet fluid designs. For whatever reason, the era seemingly produced more concept cars than production ones, and I am happy to see at least one watch brand use these lost would-be driving machines as inspiration for a high-end collection. 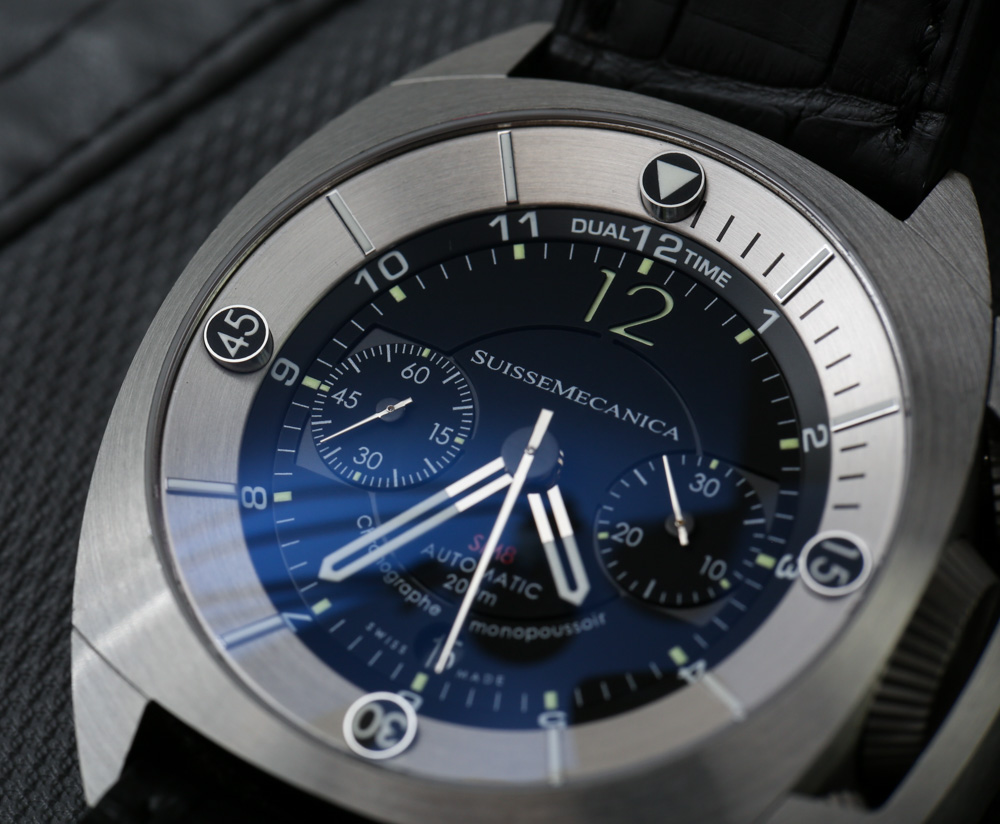 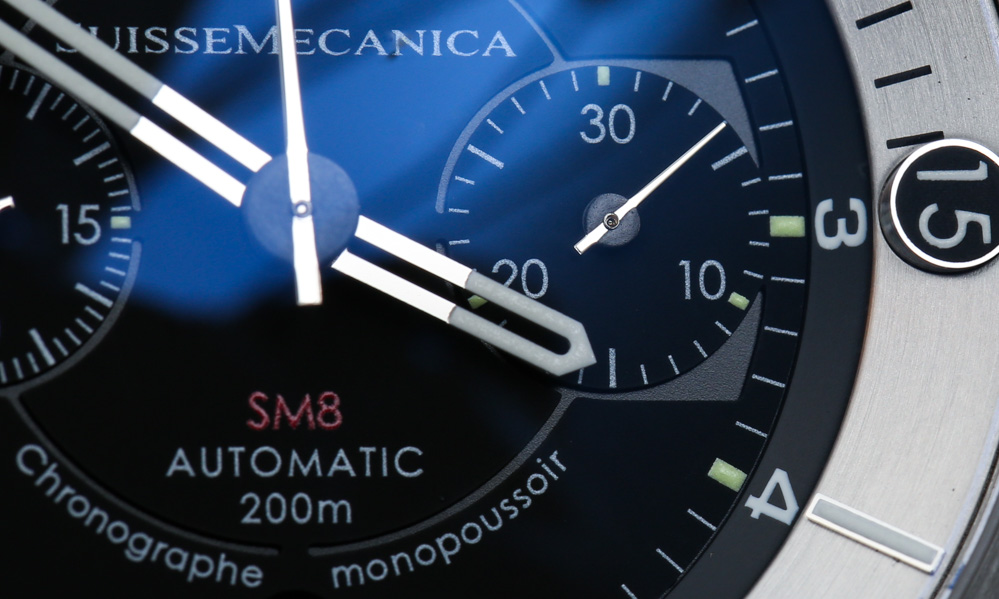 The overall cushion-style shape of the case and the guard over the crowns/pushers is what gives the profile of the SuisseMecanica SM8 Chronograph a Panerai Luminor-style look – but otherwise, the watches don’t have anything in common. Panerai’s case design is something they inherited from Rolex designs, but just super-sized, and it’s been a winning formula for them ever since. You can’t blame other designers for being at least somewhat intrigued by such a winning look.

The SM8 case is generally beautiful with its sharp cut lines and a perfectly polished steel case. The downside is that it can be as sharp as a ninja star. I liked to joke that “this is the most dangerous watch I’ve ever worn.” Edges around the case are quite sharp, as are (especially) the lugs, sliding crown guard mechanism (more on that in a bit), and the crowns/pushers. I’m not saying you’ll injure yourself while wearing or operating the SuisseMecanica SM8 Chronograph… but you do need to treat it with respect. It would also not be incorrect to assume that in an emergency situation you might be able to subdue an assailant by using the watch (and the right tactics). 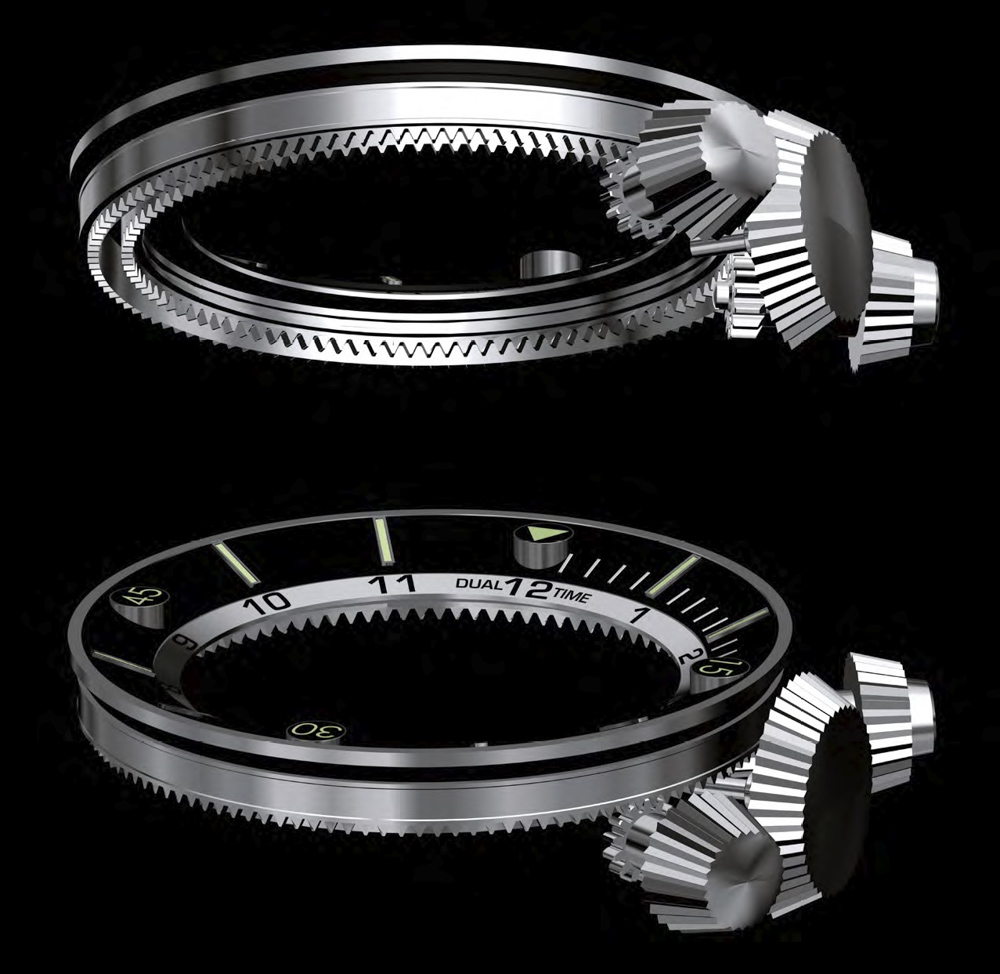 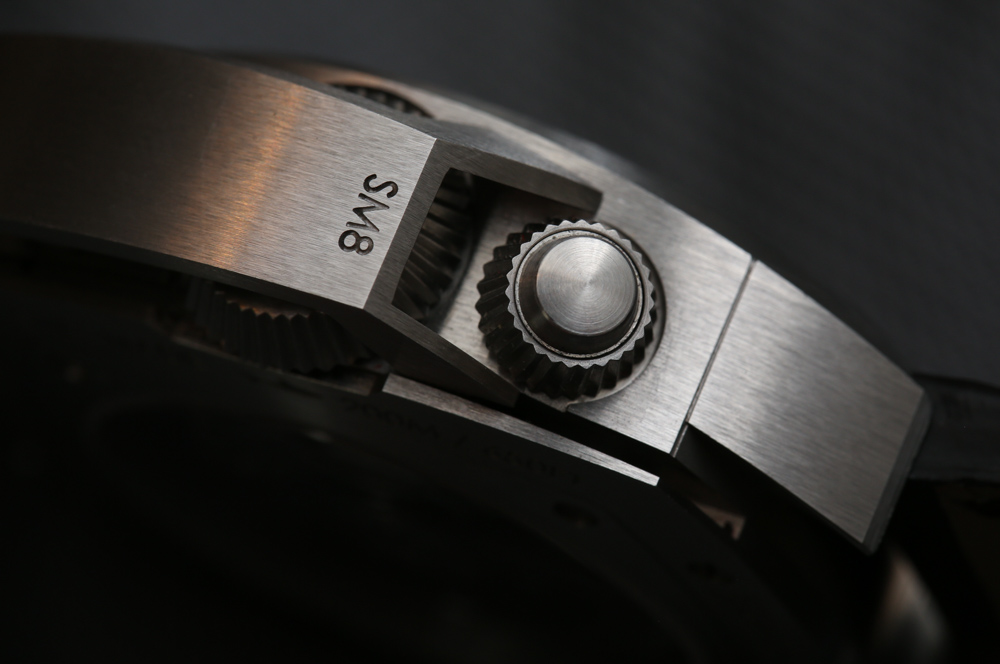 The SuisseMecanica SM8 Chronograph is also large, but not excessively so. The case itself is 43mm wide not including the crown guard. With the crown guard, it is 48.5mm wide. The lug-to-lug length of the watch is about 52mm, and the case is about 18mm thick with the thick AR-coated sapphire crystal over the dial. While the “advertised” versions of the SM8 are in steel, SuisseMecanica says that given their SM8 watches are produced on order, they are happy to make the watch in titanium or precious metals as well (at different prices, of course).

A fine look at the SM8 case reveals a wonderful attention to detail. First, you see that the lines on the case form a series of concentric circles that flow together harmoniously. You even see a nice flow of the brushed polishing direction which is a wonderful detail that helps the entire watch look fantastic, even if at first glance you don’t know what makes this polished case different from those with “lesser” brushed finishes. The lovely design thus benefits from the sharp angles, even if they are less pleasant to the touch – this is one of the SM8’s “form over function” moments. 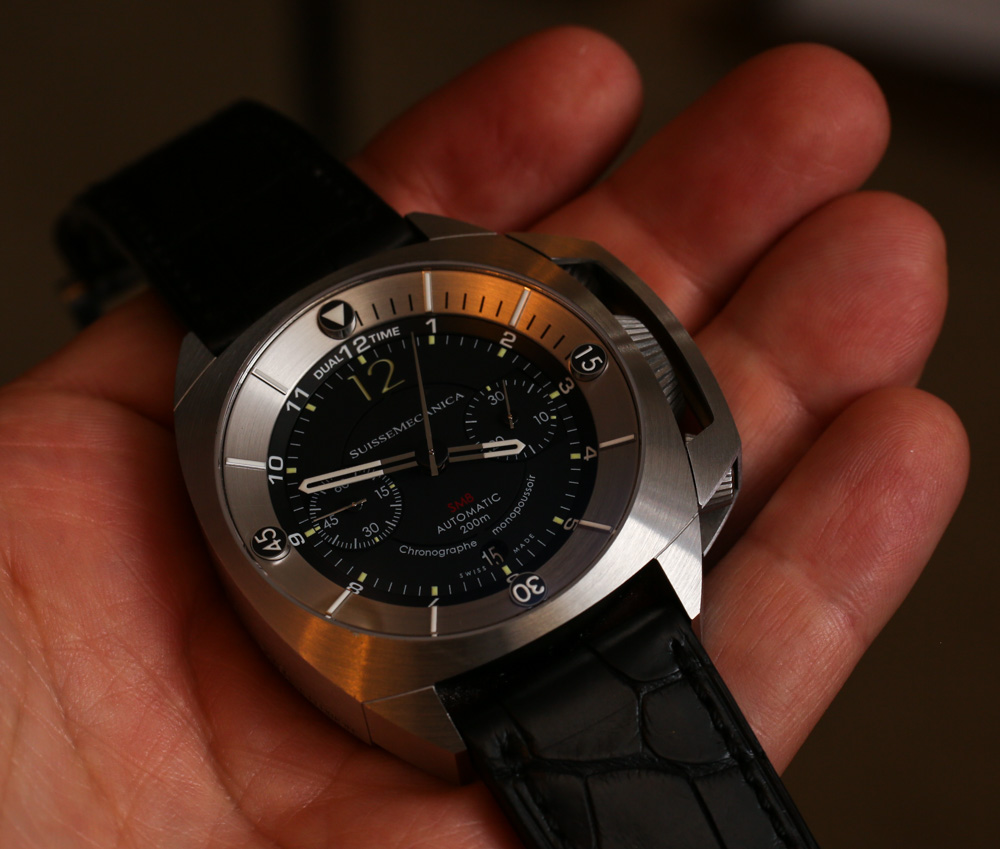 Water resistant to 200 meters, the SuisseMecanica SM8 Chronograph case has a rear sapphire crystal exhibition caseback that offers a view of the movement. The most novel feature of the case is their “Sliding Crowns Protector System” (SCPSy). This allows the crown guard system to either slide up or down to reveal better access to the top pusher and lower crown. Also, it makes the watch case even sharper – which can be useful if you need to covertly open a letter… or assassinate someone. 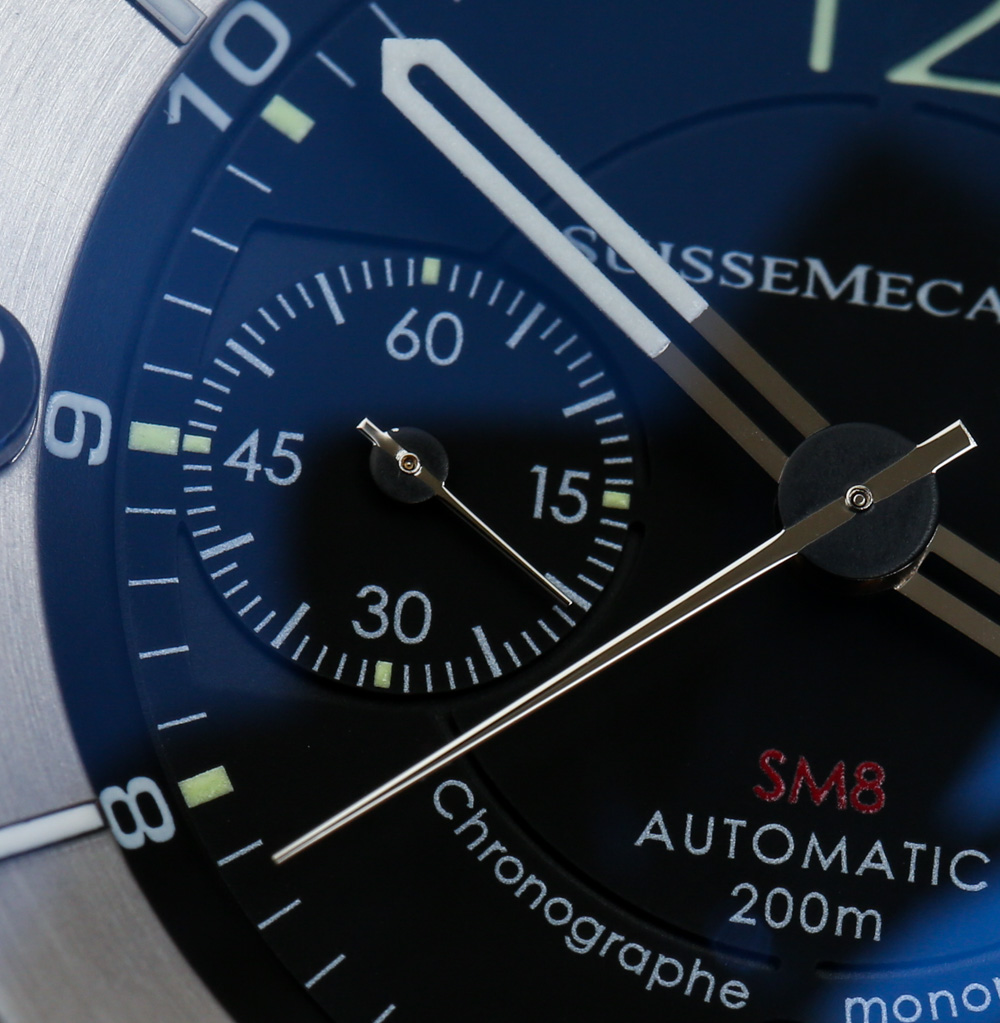 The lower crown is used to operate the inner rotating diver’s-style timing bezel, while the upper crown is used both to operate the inner second time zone ring as well as act as a button for the monopusher-operated chronograph. Aesthetically, the sliding crown guard system is cool, and the operation is fluid. Ergonomically, it doesn’t leave a lot of room to grasp things like the crown to operate the internal rotating bezel. That means slow adjustment and a potentially painful one given your finger size in relation to all the sharp adjacent edges. Again, here we have another “form over function” moment, and depending on your love of the design, this is forgivable, as the SM8 in design is really a remarkable object to behold. It is simply important to mention the inherent “danger” of this beauty.