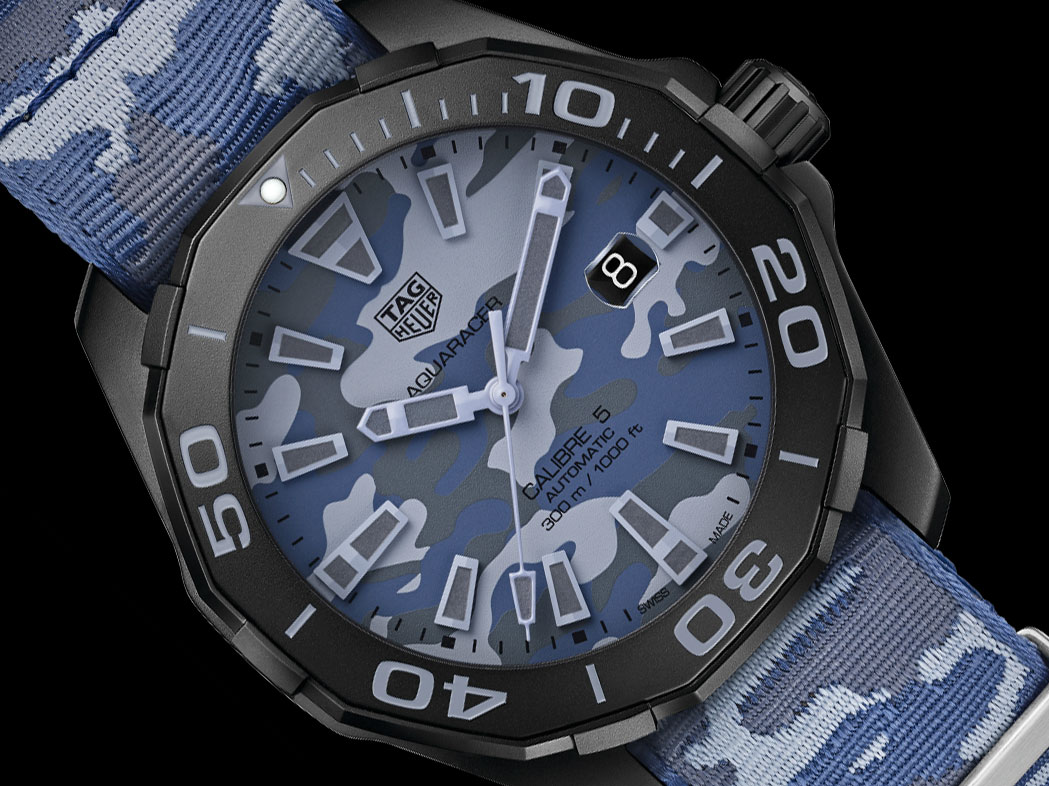 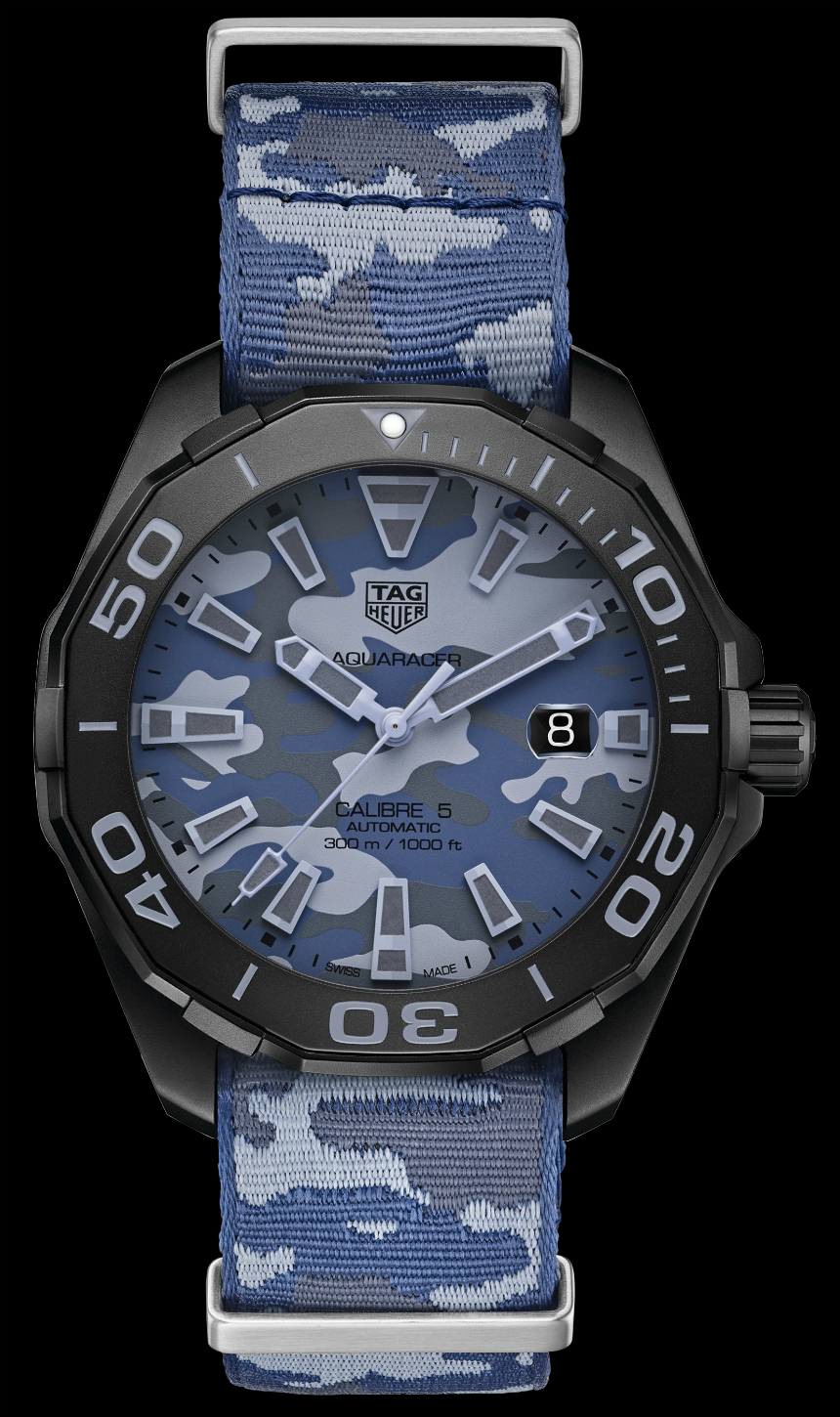 Here’s the thing with camouflage: it is, by definition, a means of disruption which uses a sharply contrasting pattern to break up the physical outlines of whatever it is it’s trying to obscure. So it should come as little surprise that TAG Heuer – the brand who has probably invested more time and energy disrupting their own status quo than any other Swiss watchmaker – is pushing the camouflage slider all the way to eleven on a pair of military-inspired TAG Heuer Aquaracer 300 Caliber 5 watches for Baselworld 2017. 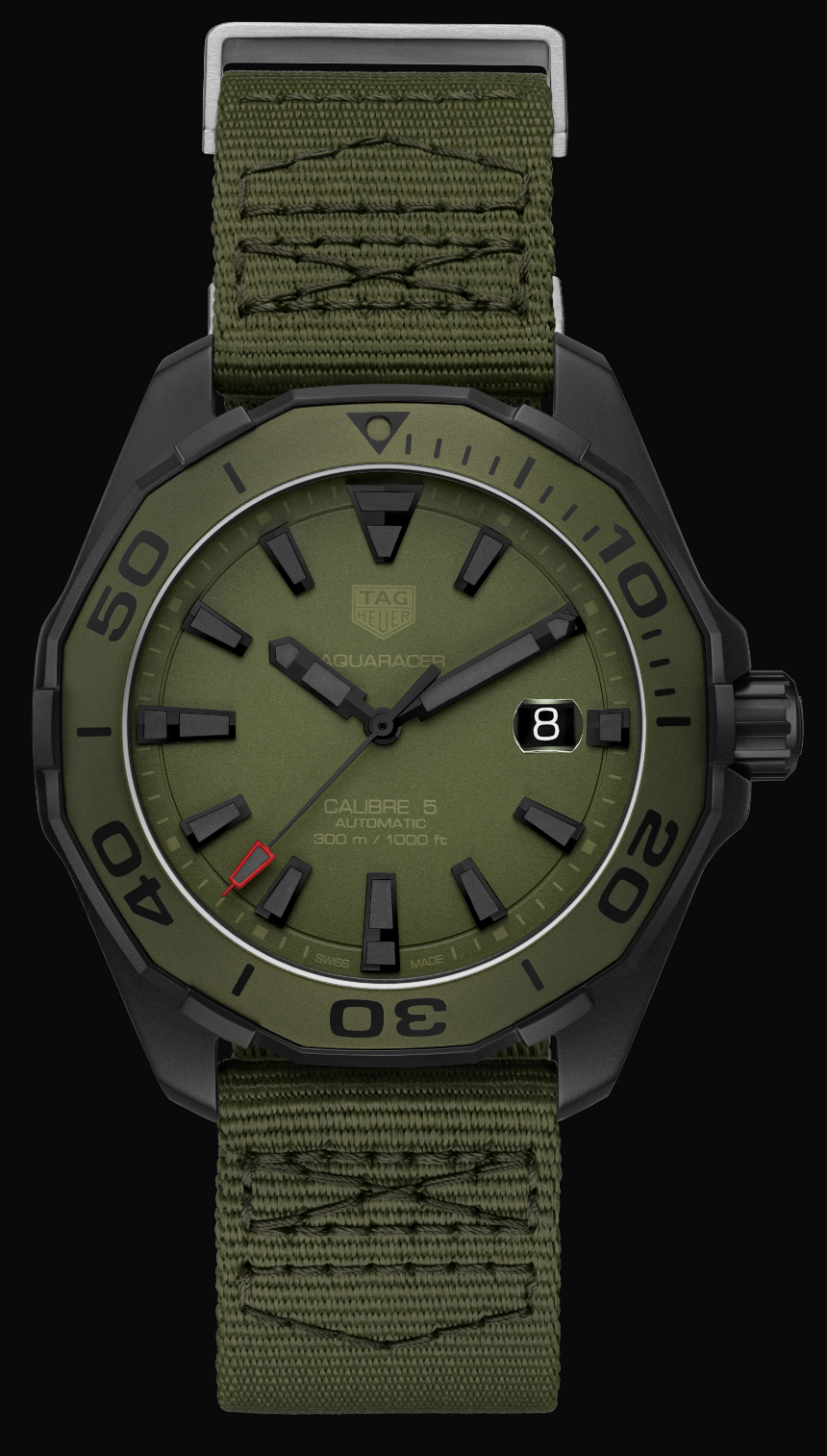 Now, I’ll be the first to admit that I’m a sucker for just about anything in camo or OD green. Just ask Nick Wooster – when done right, its disruption is slight – a simultaneously edgy yet understated accenting detail that, just like an effective camouflage pattern, doesn’t draw unwanted attention until it comes time to warrant a closer inspection. This is probably best exhibited in the stealthy Khaki variant, which flies under the radar by presenting the Aquaracer in an all-matte OD-green livery capped with a green ceramic bezel insert – an aesthetic shared by other types of gear that value discretion over vanity; stuff like cerakote pistols, ammunition crates, and battle uniforms. 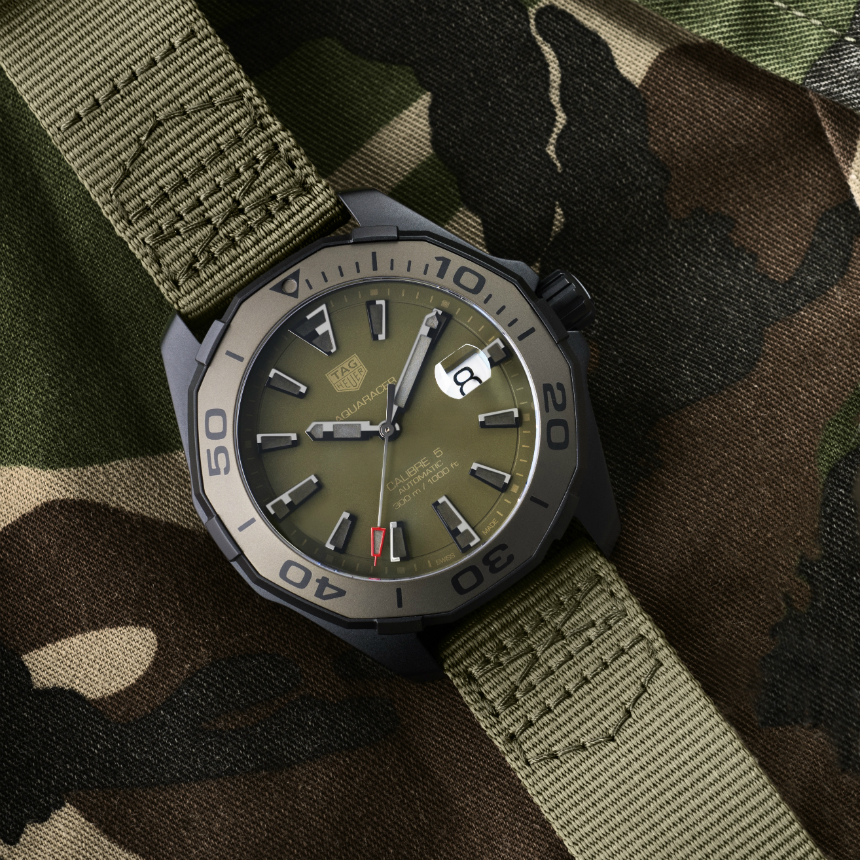 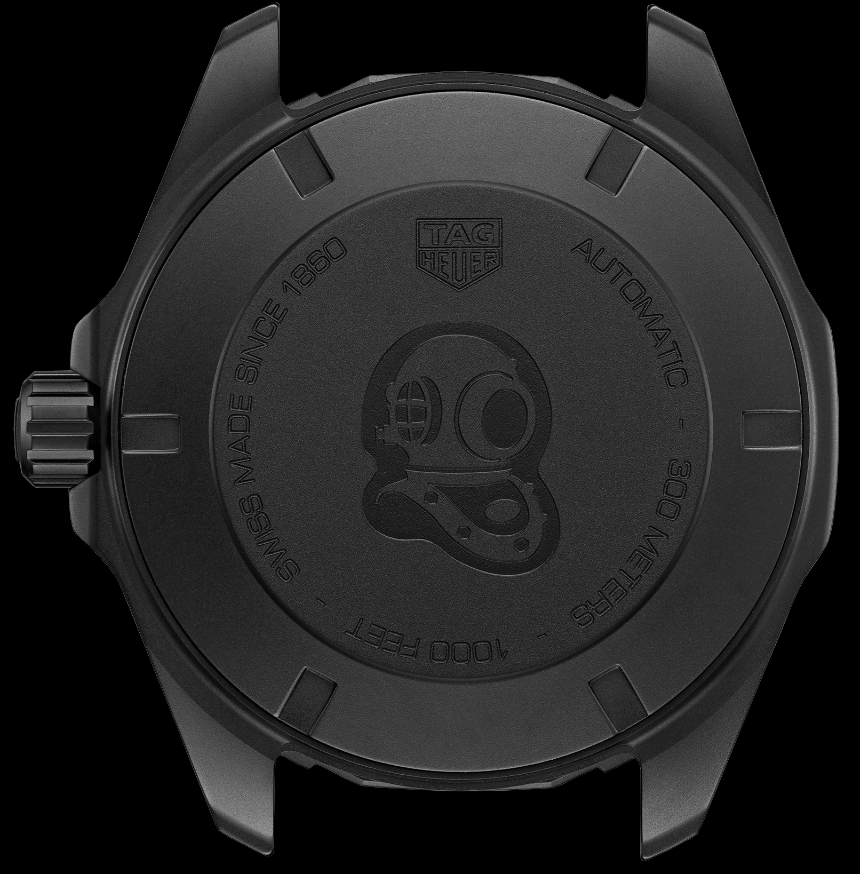 The second camo option is certain to be the more polarizing of the two, as it effectively demonstrates “the value of not being seen” (hat-tip to Monty Python, for those in the know) – particularly when it comes to camouflaging oneself. And since we don’t all live on the Siberian tundra, it’s probably safe to assume that the design intent of this watch is indeed disruption by definition, but not in the sense that would ever enable its wearer to blend in. 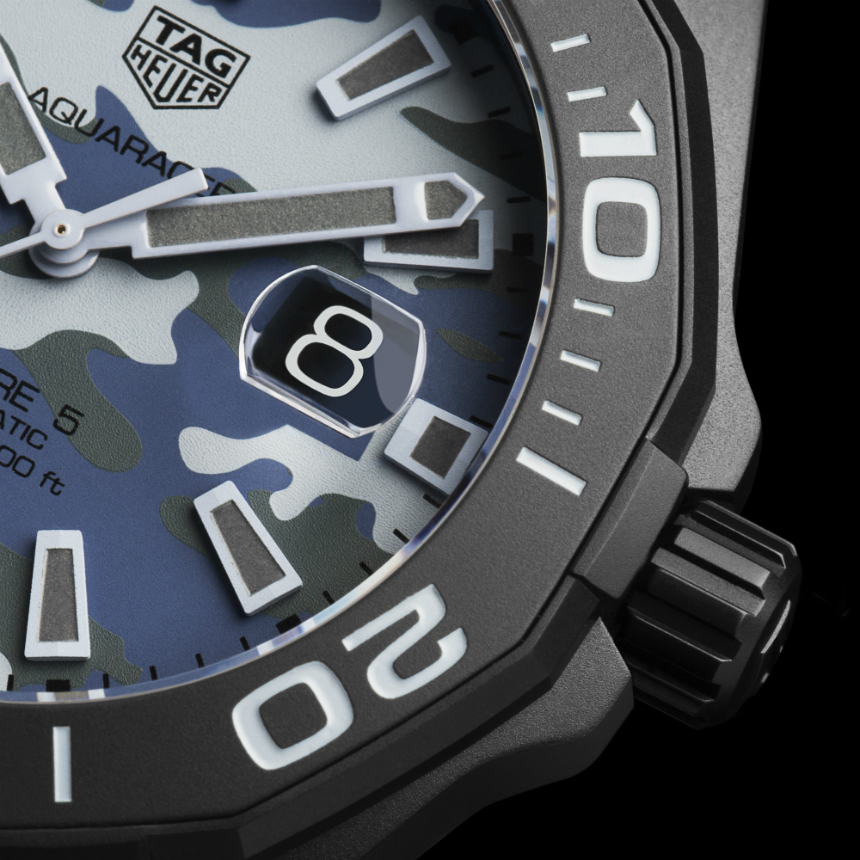 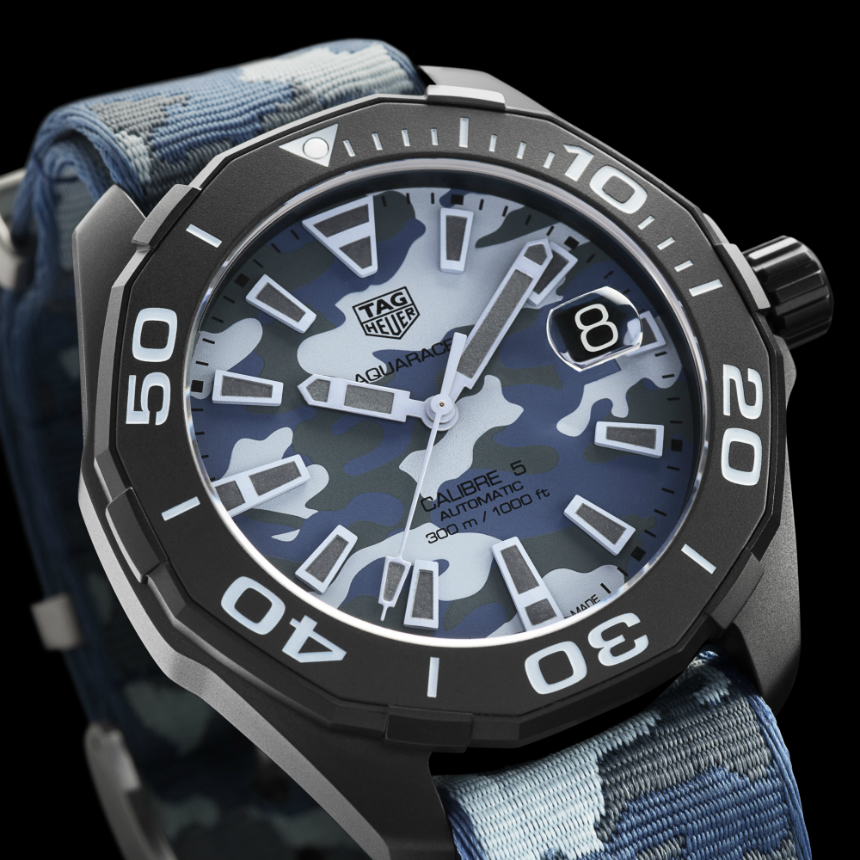 With the exception of the dramatic shift in palette, everything else with these new Aquatimers is the same as the “all-terrain diver” variant we enjoyed reviewing last summer. That includes the same PVD-coated grade 2 titanium case construction with 300m of water resistance, which is powered by the same Caliber 5 automatic movement with a date that’s magnified by a cyclops at 3:00. One key difference is the dial itself, which no longer exhibits the louvered, or textured “shutters” that ran horizontally across the dial. Whether to further minimize reflective surfaces on the dial, or simply to provide a better canvas for the arctic camo, the elimination of this detail is actually a welcome one – particularly on the khaki variant, which has one less texture competing for attention. 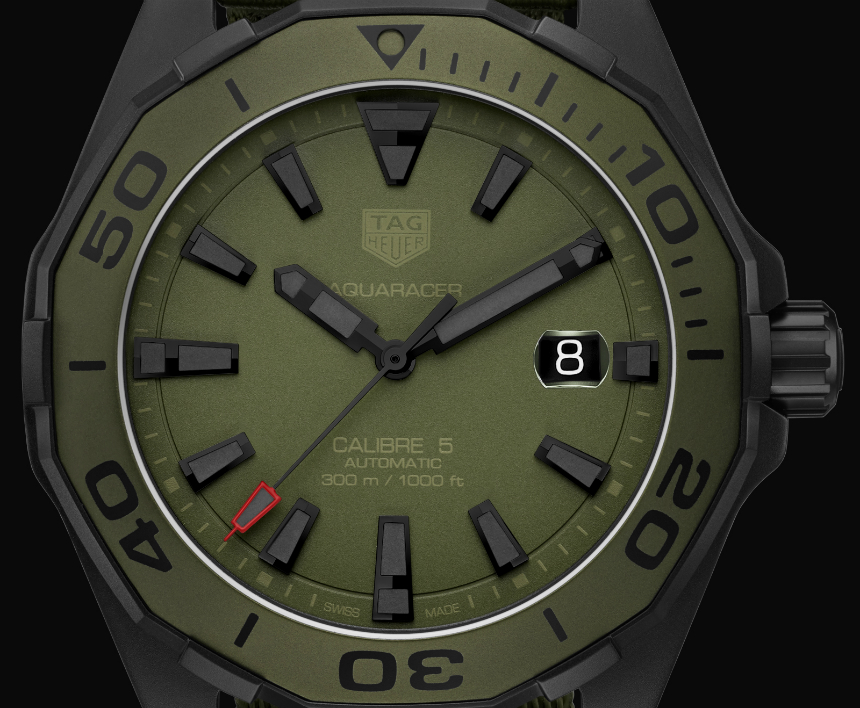 These new TAG Heuer Aquaracer 300 Caliber 5 watches also skip the rubber-backed canvas strap found on previous WAY models, instead opting for a pair of stitched nylon straps that each match their respective dials. On the khaki dial (WAY208E.FC8222), the effect unsurprisingly works extremely well, but for the arctic camo treatment (ref. WAY208D.FC8221), the strap alone could run the risk of overpowering even the dial, but we’ll withhold that judgment until we have one on the wrist to see for ourselves. The price for both variants of this new titanium Aquaracer 300 Caliber 5 watch is 2,500 euros. tagheuer.com