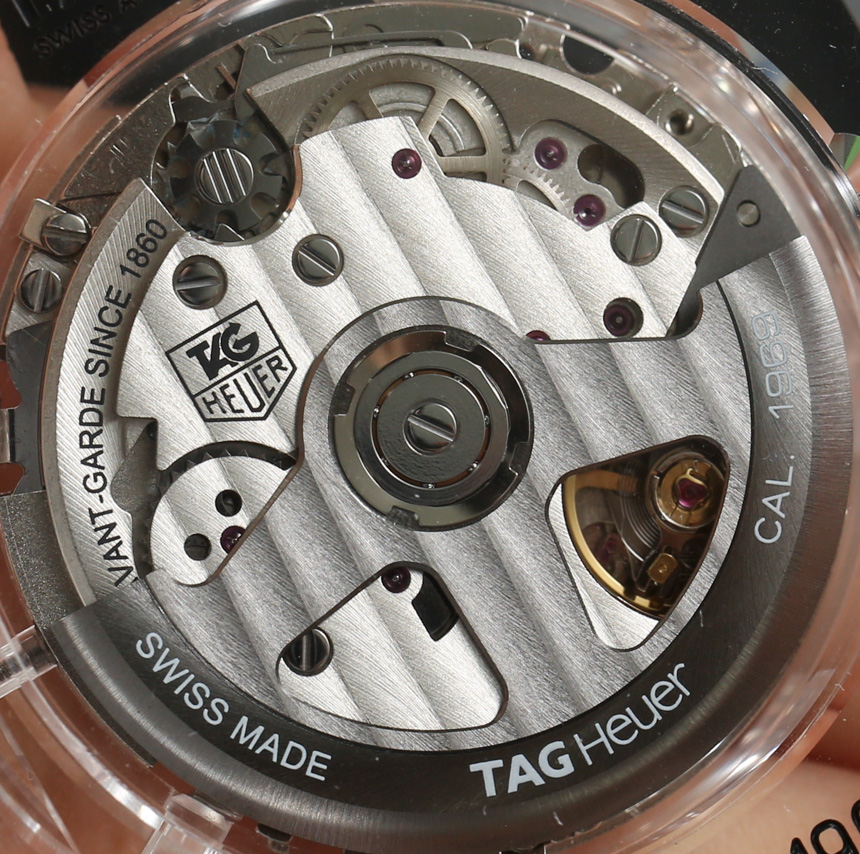 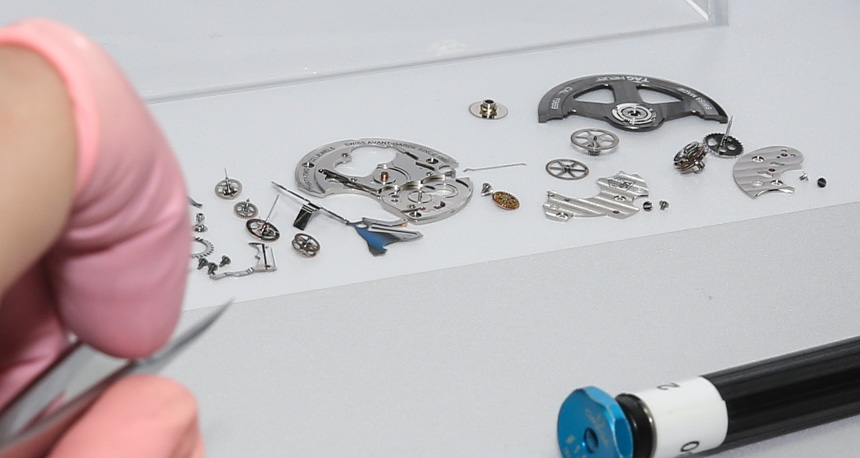 At 6.5mm thick, the Calibre 1969 is a rather thin chronograph. It is certainly thinner than the 1887, which is good because it allows TAG Heuer to produce a less bulky watch in a more elegant case. The chronograph is really going to be a major part of the movement, and it has two important features that chronograph lovers should be looking for. First is a vertical clutch transmission, as well a column wheel. These features ensure smooth, precise operation of the chronograph as well as long term reliability. While not rendered in blued steel (such as the column wheel on the 1887), the column wheel on the 1969 is easily visible through the rear of the watch peeking out from the main plate.

While movements with many parts are impressive, from an industrial and efficiency standpoint those with fewer parts are better. More pieces means that more things can go wrong. In all, the Calibre 1969 has about 200 parts, most of which are produced at the Chevenez manufacture. TAG Heuer has employed a series of very high-tech machines to produce everything. Using smaller, oil-free CNC and other robotic manufacturing machines (to make the parts), TAG Heuer is awarded with an amazing amount of technical flexibility that allows them to change what they are producing very quickly. The facility is fully staffed with watchmakers in charge of assembly and quality control. 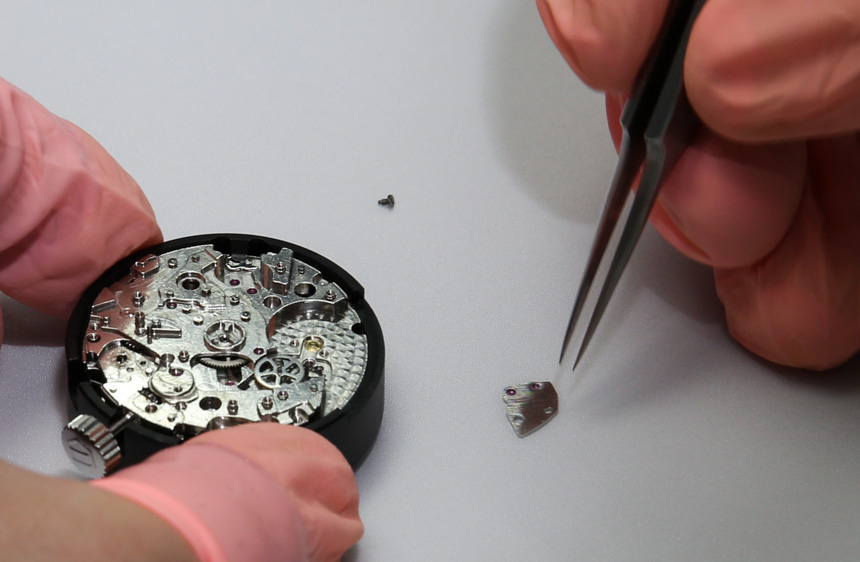 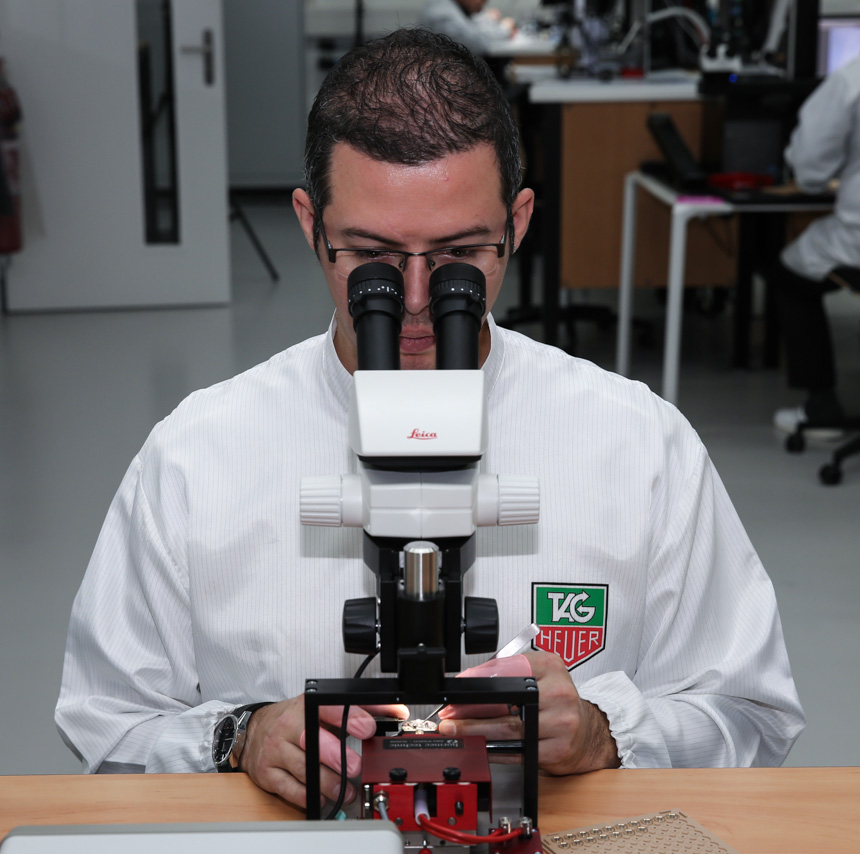 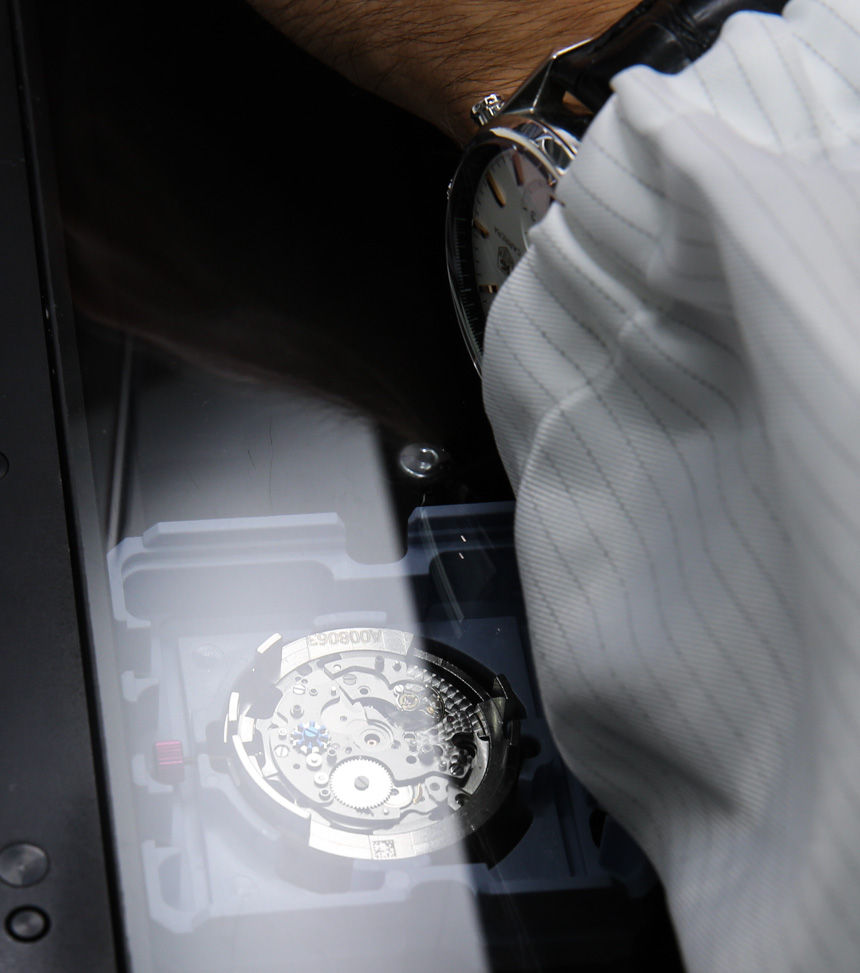 An attractive series of features means nothing without performance. TAG Heuer designed the Calibre 1969 to be easily regulated within COSC Chronometer certification range, so on average the 1969 should be no worse than plus 4 or minus 6 seconds a day. While for now the movements aren’t officially COSC certified, they are designed to operate within COSC accuracy specifications.

As of now TAG Heuer has not announced when the Calibre 1969 will be available for sale or what watches they will be in. Linder did however give plenty of hints about the future of the movement. First, Calibre 1969-based watches will be announced by the end of the year 2013. The movements are already in production, so they are probably going to be debuted in an actual case very soon. My guess (along with others) is that the Calibre 1969 will debut in a Carrera-style watch. 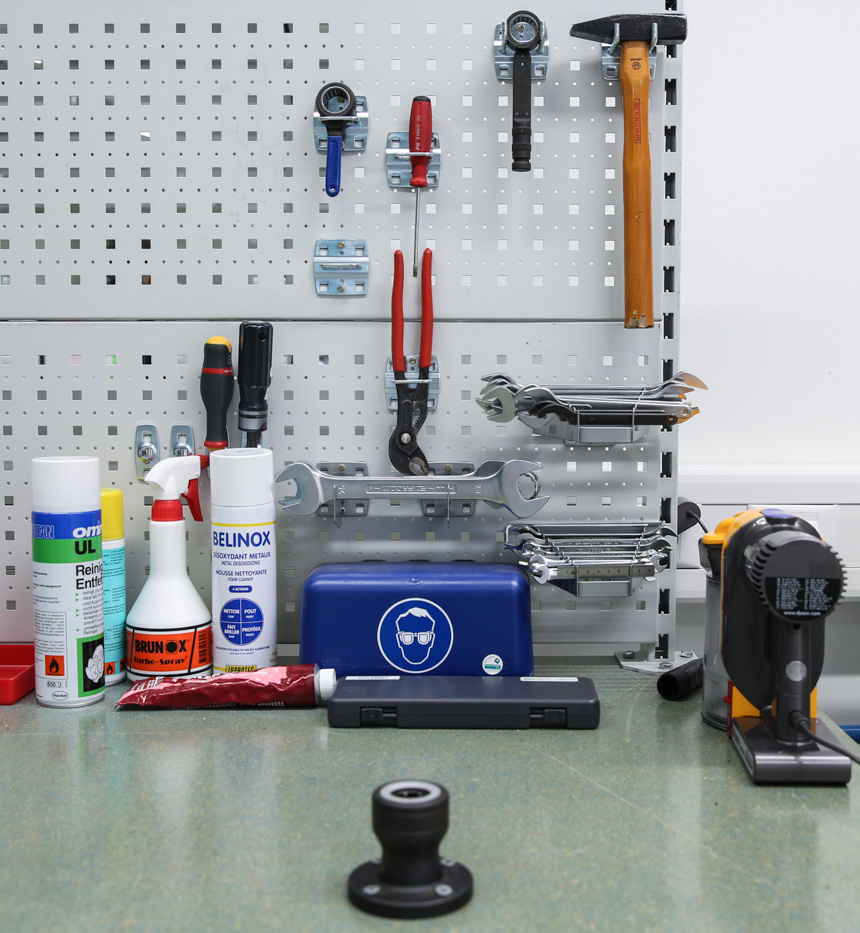 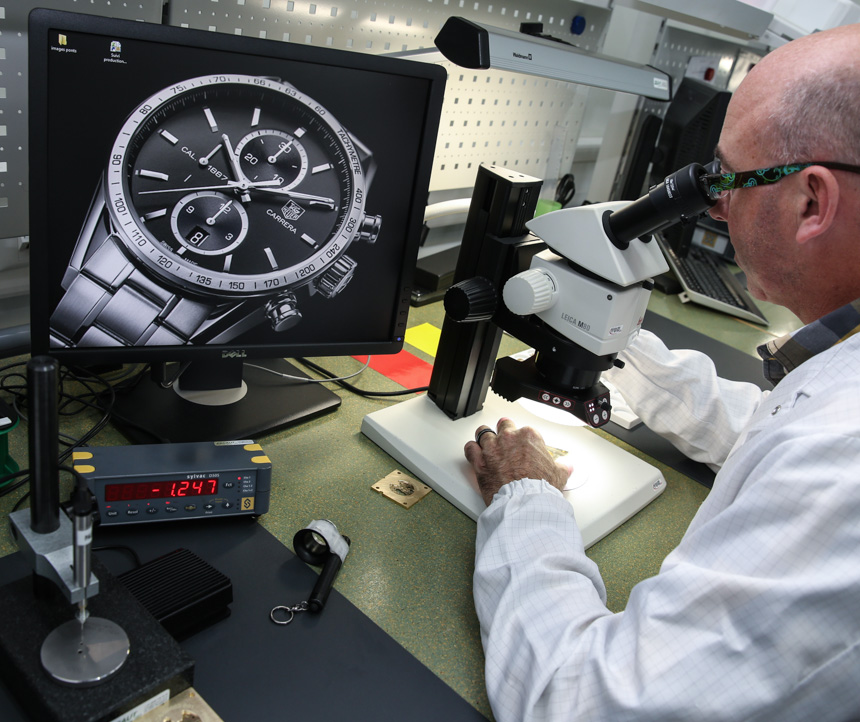 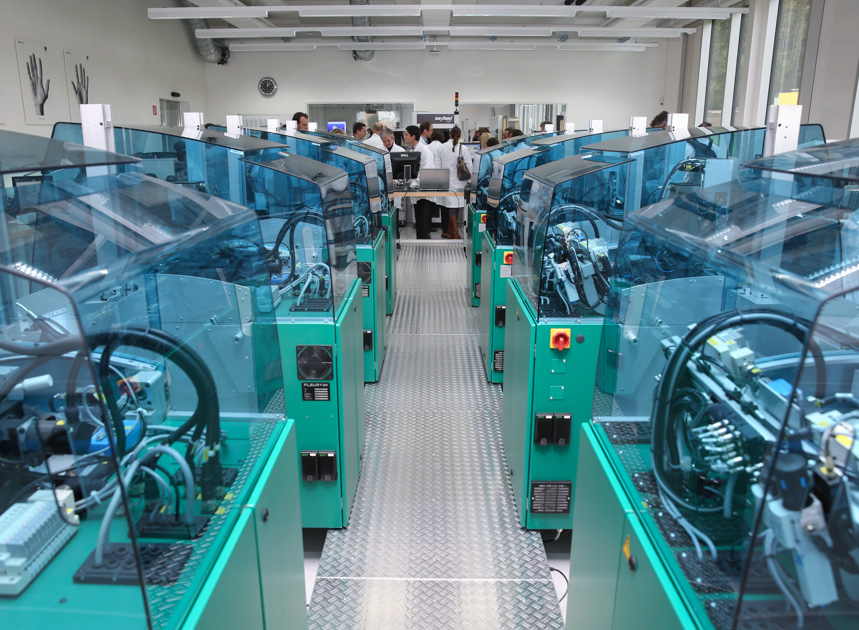 Mr. Linder was quick to point out that the 1969 movement will be used in a range of watches, and not just in single watch collections such as the Carrera. Though many movements premiere in the Carrera, they often branch out to other TAG Heuer models as the brand seeks to discover the best personality for the new movement. It is truly stunning how modern and fresh the new TAG Heuer factory is. It is certainly highly branded with pictures of TAG Heuer products and accomplishments. In many ways it is a purist production facility that feels like an automotive plant more than a traditional watch factory.

TAG Heuer brand patriarch Jack Heuer was there for the debut of the Calibre 1969. He didn’t speak much about the movement or the brand, but he did help cook lunch for us. As a rare treat TAG Heuer set up a lunch dining table in the middle of the manufacture. I’ve eaten at watch brands before, but never in the actual room where watches were being made. The matchmakers actually continued to work while we dined. 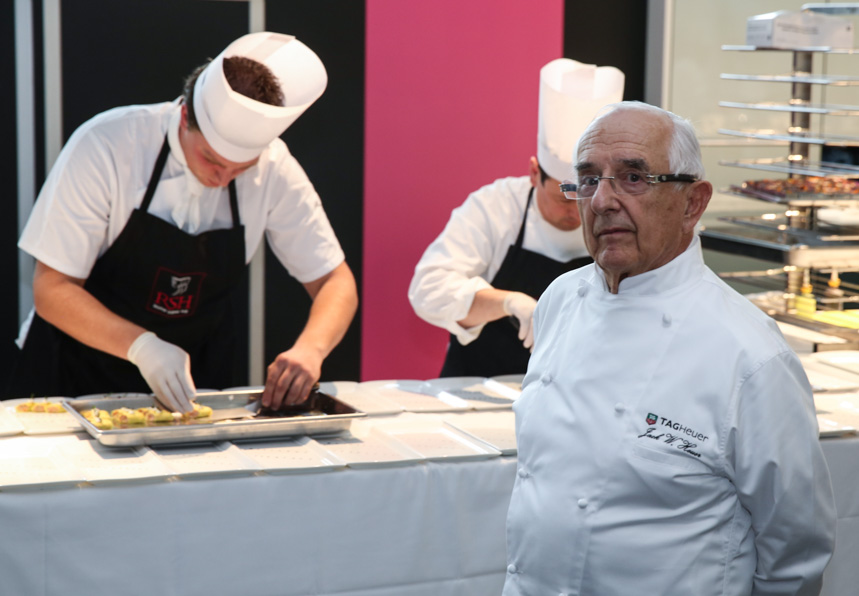 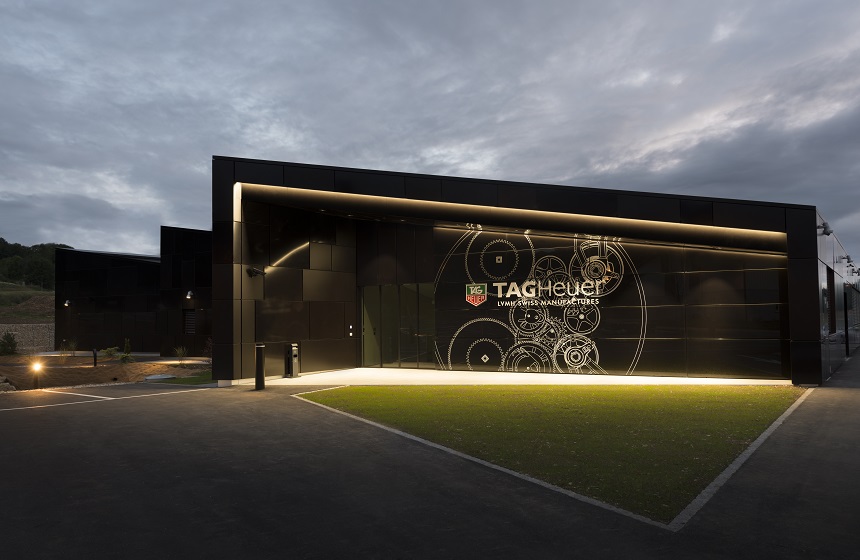 I hypothesize that watches with the Calibre 1969 movement will be positioned between the Calibre 1887 and the Calibre 36 (which is essentially a Zenith El Primero). TAG Heuer isn’t clear on pricing yet because all the details aren’t ready, but these will become clear soon. As I said, the 1969 will more than likely debut in a Carrera watch, but should branch out a bit in the near future into other product families.

As a watch lover I am excited about the Calibre 1969 (Calibre CH 80) because of its functionality, design, and relative affordable. Given the right case and dial design, I could easily see myself lusting after watches with this movement inside of it and spending my own money on one. As soon as TAG Heuer has released the first watch with a Calibre 1969 movement in it, aBlogtoWatch will be among the first to inform you about it. We believe prices will be between $5,000 – $8,000. tagheuer.com