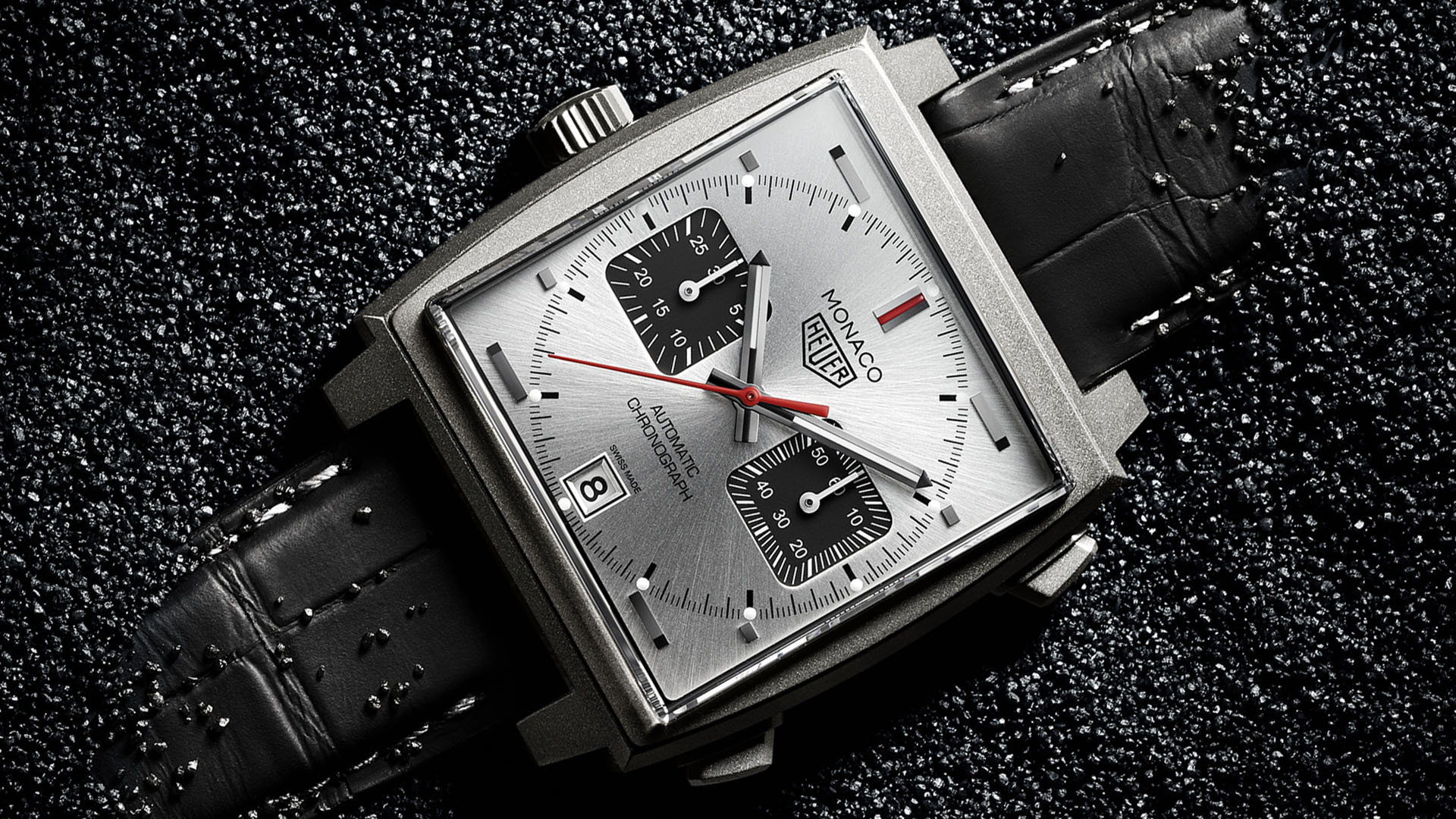 In the current materials arms race among luxury watchmakers, with exotic solutions like carbon composites, super-hard ceramics, and sapphire entering the scene, it can be easy for enthusiasts to forget one of the earliest advanced case materials — titanium. While titanium has been used in watchmaking for several decades, the past few years have seen the material go from a rare curiosity to a staple of sports watch lineups at nearly every level of the industry. TAG Heuer has more experience with titanium than most brands, with a legacy of using the metal dating back to 1983, and for its latest release, the marque brings this tough material to its most recognizable design. The new limited-edition TAG Heuer Monaco Titan brings a new, more aggressive dimension to the classic Calibre 11 Monaco series, without sacrificing the refined essence of the line. 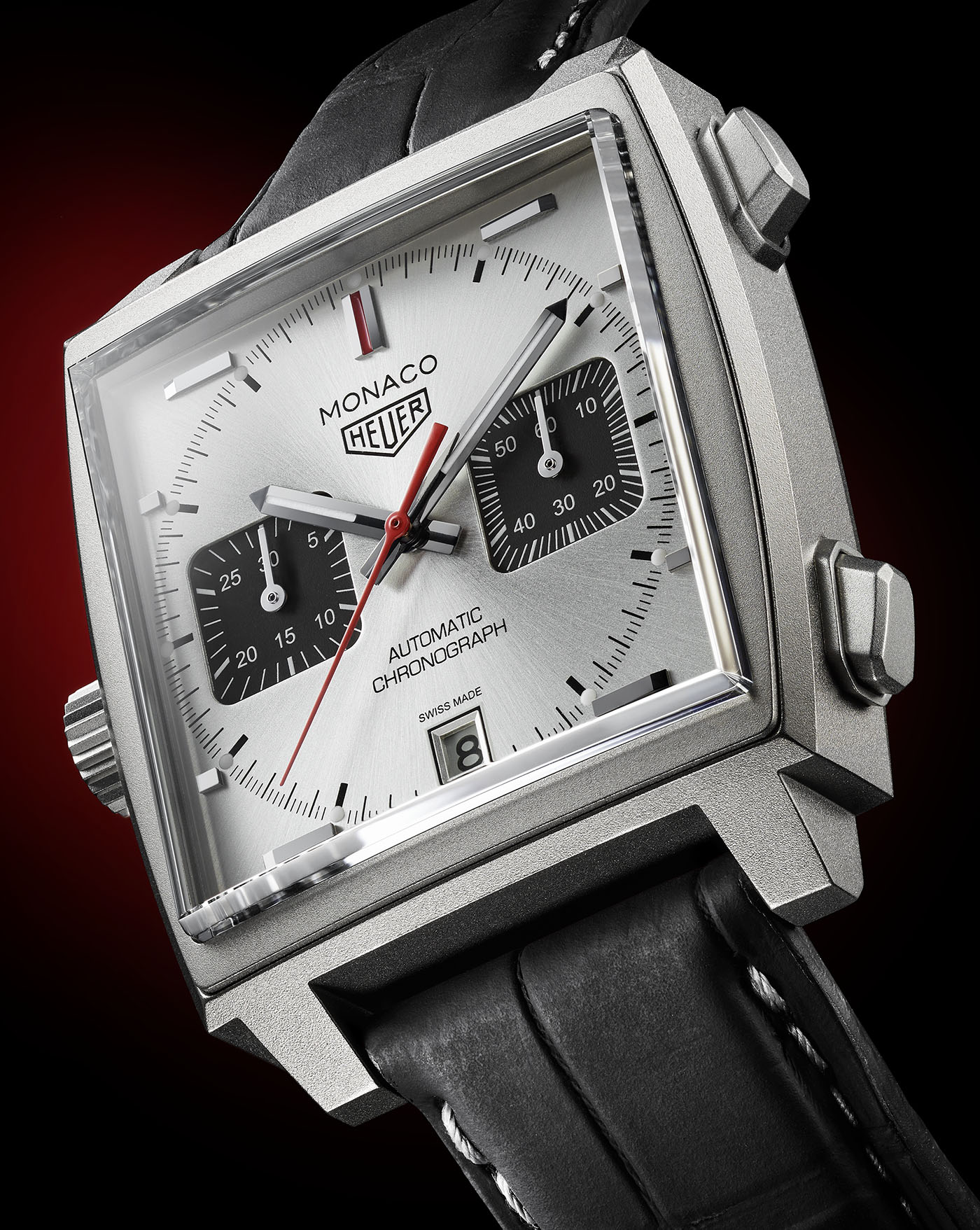 Although the 39mm square left-hand crown form of the TAG Heuer Monaco Titan is hardly new, the use of Grade 2 titanium for the case gives this familiar design a markedly different personality. While less hard than the Grade 5 alloy seen in many modern case designs, Grade 2 is essentially pure titanium, allowing wearers to experience the element in its unadulterated form. The distinctive squared-off shape of the Monaco, with its short wedge-like lugs, angled pushers, and slightly curving case sides, is given a fully sandblasted finish here to differentiate it from its stainless steel cousins. The titanium used is a lighter shade than many titanium cases in initial images, preserving the uniqueness and nuance of the classic Monaco form without hiding detail like a darker alloy might have done. Like other models in the contemporary Monaco series, the Monaco Titan offers a sapphire display caseback and a solid 100-meter water resistance rating. 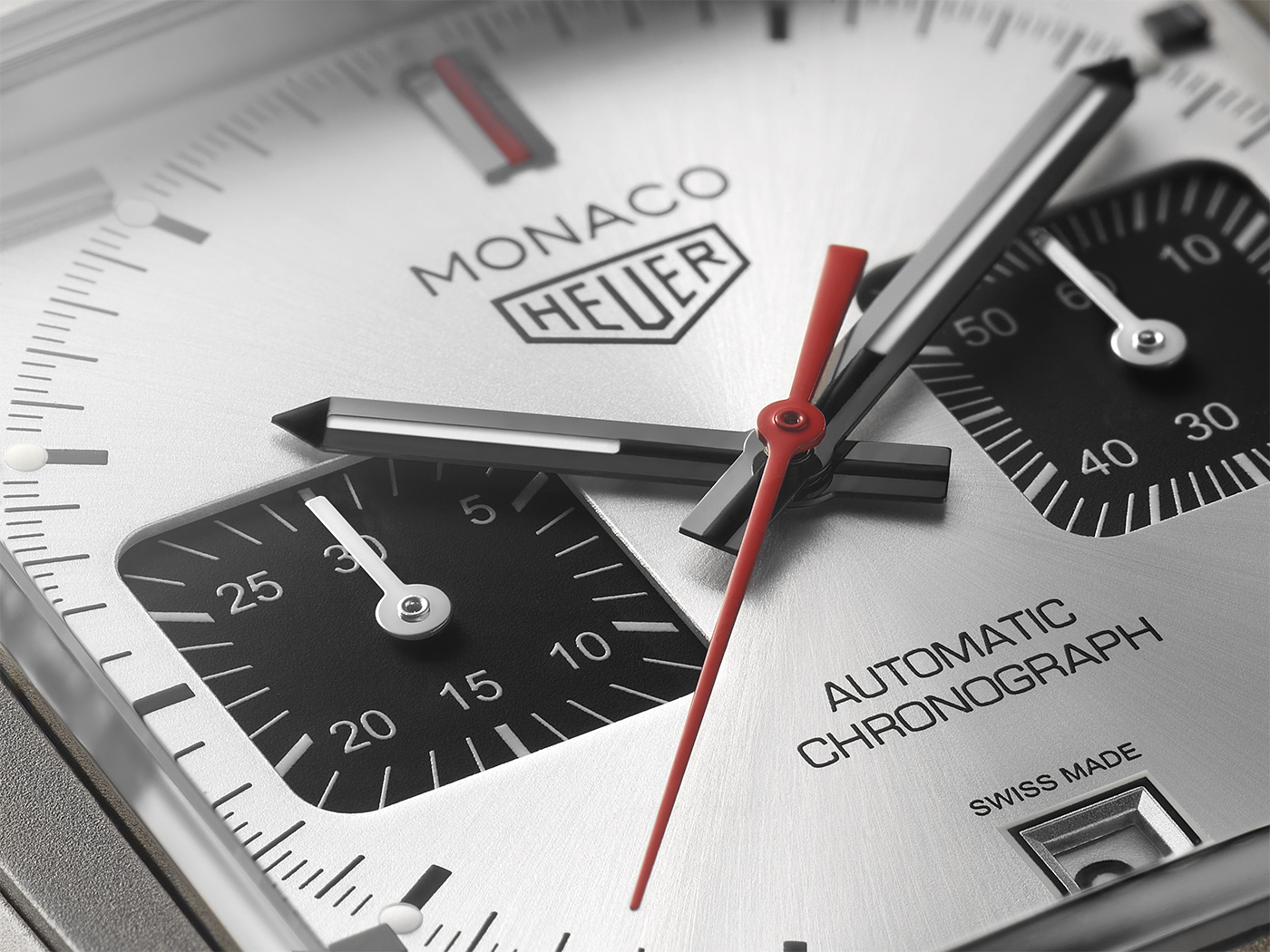 The case of the TAG Heuer Monaco Titan may be its focal point, but the dial sets itself apart from the rest of the line at a glance as well. The basic dial format may be carried over from other left-hand crown Monaco models, with its distinctive black-plated horizontal applied indices, striped pointed baton hands, and rounded square subdials, but the Monaco Titan takes a unique approach to its use of color. The Monaco Titan offers a striking panda dial look, with a heavily textured silver sunburst main dial accented by matte black chronograph subdials. With the matte case finishing, black dial text, and simple black on silver colorway, the use of vivid red for the chronograph seconds hand and the 12 o’clock index becomes highly impactful in initial images. 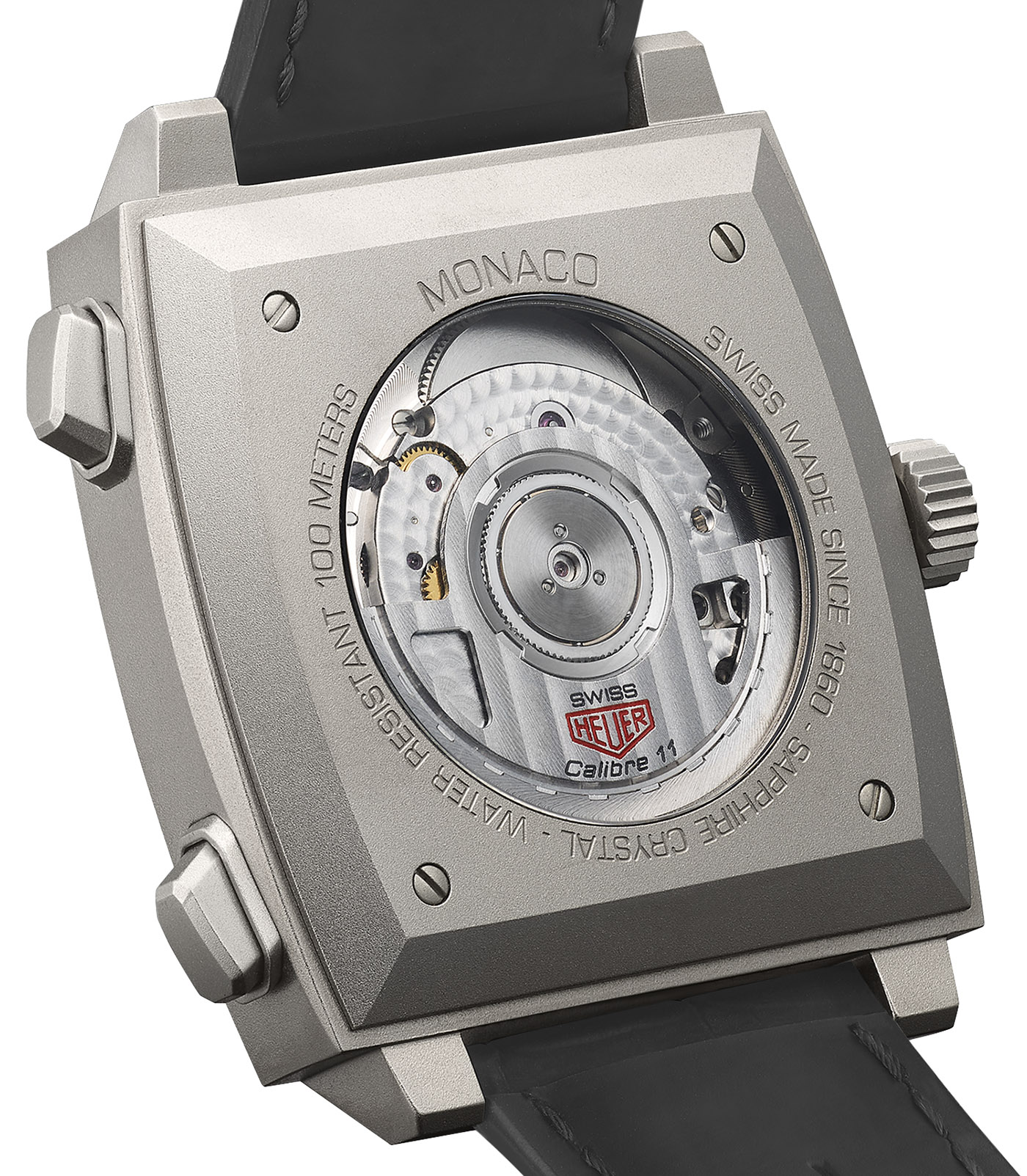 TAG Heuer powers the Monaco Titan with the Sellita SW300-1 based Calibre 11 automatic chronograph movement. Like the iconic Calibre 11 movement that powered the original Heuer Monaco in 1969, this modern Calibre 11 is a modular chronograph, mating a Dubois-Depraz chronograph module to the Sellita base movement, but the similarities between the two more or less end there. The modern Calibre 11 is a standard automatic movement as opposed to the original’s micro-rotor, and the current version offers a 30-minute chronograph rather than the 12-hour scale of the 1969 model. On the other hand, the finishing is far more extensive on this contemporary movement, with a handsome mix of perlage and Côtes de Genève topped with a signed rotor. While more robust than that of its forebear, the performance of this modern Calibre 11 is also in danger of feeling dated in the current watchmaking landscape, offering a 40-hour power reserve at a 28,800 bph beat rate. TAG Heuer completes the Monaco Titan with an asphalt black alligator leather strap featuring silver contrast stitching and a Heuer shield deployant clasp. 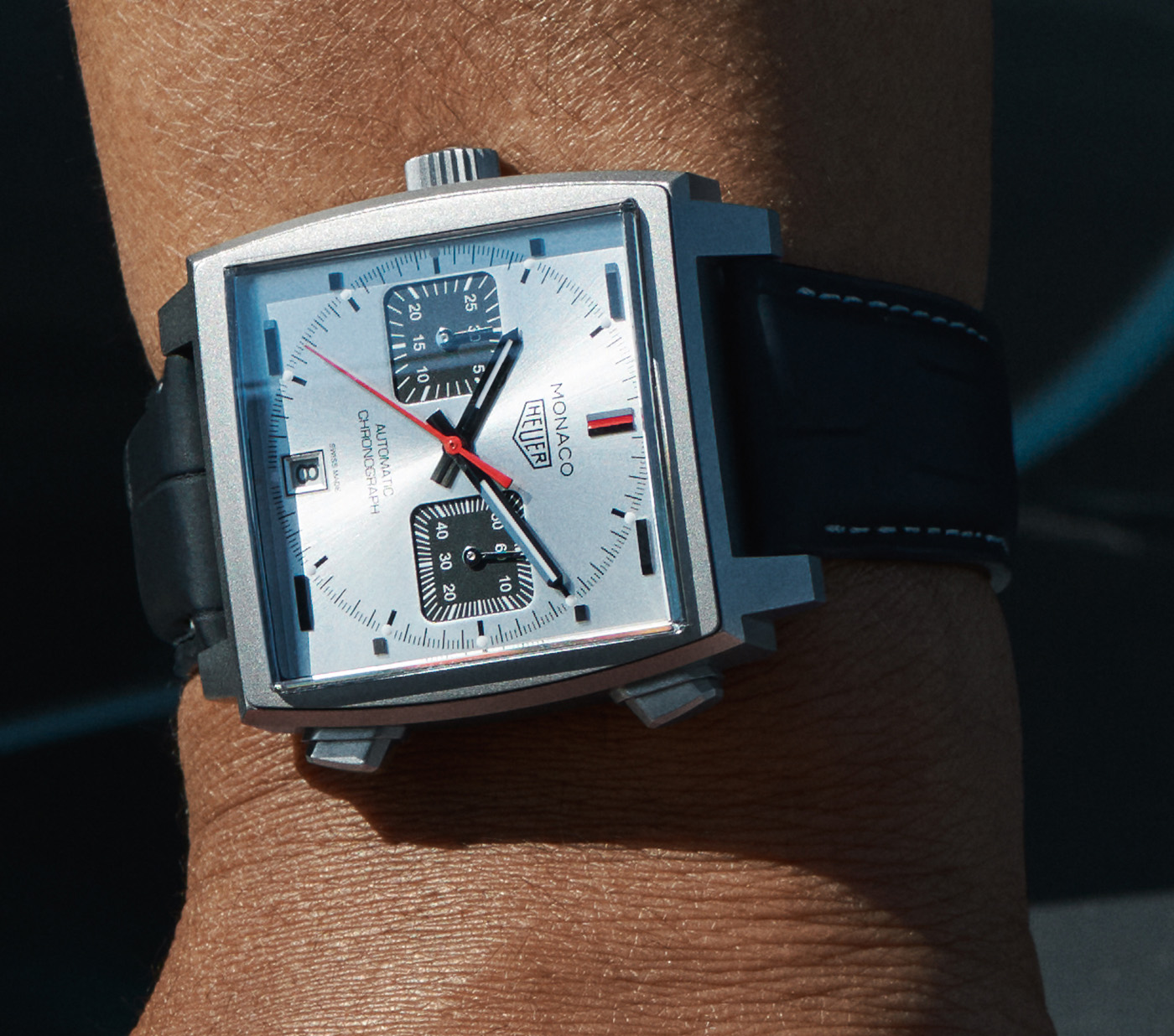 The limited-edition TAG Heuer Monaco Titan may not be utterly groundbreaking in a market increasingly filled with titanium designs, but it does offer one of the most intriguing and idiosyncratic packages in the current Monaco line thanks to its unorthodox case material and alluring colorway. Only 500 examples of the TAG Heuer Monaco Titan will be made, available now through authorized dealers at an MSRP of $7,900. For more details, please visit the brand’s website.