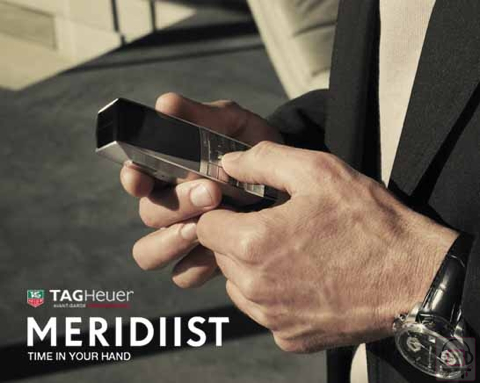 This could be an answer to a question the market did not ask, or it could be a great device that is (economically) ahead of its time. When Vertu came out with their ultra-high end phones, the mobile phone enthusiast world scoffed. A) why pay so much money for a phone that is going to be obsolete before I can finish paying it off, and B) why again am I paying $5000 for a phone that isn’t solid gold (and even if it were…). The answer to these questions is probably obvious to most people who like cell phones, but that isn’t who the Vertu or the new Tag Heuer Meridiist phone is aimed toward. Didn’t see a Vertu at your local AT&T dealer? That is because you can only find them at high-end watch stores, and the same will be true for the Tag Heuer Meridiist phones.

I will spare all the marketing hype and tell you what is important to know about the Meridiist. Tag Heuer decided it wanted a mobile phone. Finding success with other branded products such as eyeglasses, it felt the brand was strong enough to enter other markets. Vertu proved that at least someone was buying super expensive phones, and LVMH (Tag Heuer’s parent company) felt that Tag Heuer was probably the best bet for the endeavor. About three years ago, Tag Heuer teamed with a company called Modelab, which helps companies build branded mobile phones. Tag Heuer could likely offer lots of input and engineering as to the materials and construction of the phone itself, but the actual electronics inside and software were things Tag Heuer has had no experience with. Better leave it to the experts. 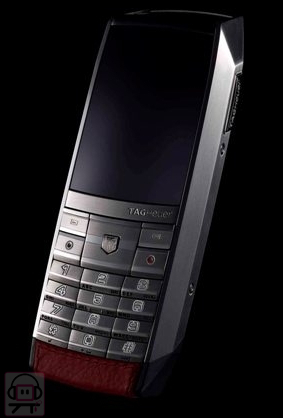 Think of how ubiquitous mobile phones are. First of all, for those who do not know we call them mobile phones now, not cellular phone, because they no longer work via interaction with cellular towers. Because mobile phones today use a digital and not analog signal, the term “cell phone” is not correct any longer. I just wanted to make that clear in case you thought the European lingo was rubbing off on me (as mobile phones there are often called, my “mobile”). Returning from our tangent, the ubiquity of mobile phones have taken them from being a mere tool to an accessory. Like a watch (which also started) as a tool, having this required peripheral means you have many options about which to own. Because of this, the status conscious seek ever more interesting mobile devices with to impress and feel good about owning. That is the idea behind the Vertu, and the Meridiist. The problem however is that unlike a watch, a mobile phone is a piece of constantly evolving technology. Constantly doing more, using new formats, and being exposed to increased usage demands. Most people don’t keep a phone for more that two years, and because of that, luxury phones are a hard sell for most. The majority of us gawk at spending $300 on a phone, so what will the sticker shock be like at $6000? In response to this, at least Vertu promises a concierge service with the phone, which does… well I am not sure. Some sort of quasi-outsourced secretary I imagine. Tag Heuer has made no mention of a similar service, but attempts to away would-be buyers on the current technical specifications of the Meridiist line.

Included are two displays; a nice OLED display with a relatively sharp resolution (for and OLED screen) on the top of the phone, and a larger front QVGA screen. This ought to make it easy to receive information by just looking down at the phone. There is also a 2 megapixel camera (nothing to celebrate about) and the promise of 7 hours of battery power with 28 days of standby (which I will have to see to believe). There is also the requisite media player, which doesn’t mean a thing without the right amount of internal storage and playback software. Obviously the technical details are thin, but this is because the phone is marketed as a luxury item, not a phone. The body is cased in high quality 316 L grade steel, with a sapphire crystal or the screens.

Reaffirming my point above, Tag Heuer makes a statement on their site which says (awkwardly translated from French), “so yes, this is not a phone for geek, but for those who love beautiful things, they will be served, it is a little Swatch compared to a multi-function Tag Heuer, it is not the same thing!” Thank you elitist Tag Heuer marketing department for catering to those people who merely like “beautiful things.” As though people buy Ferraris because they merely look nice, and handle like mud. No, I’m sorry, its doesn’t work that way. Your uber-phone needs to function very well, and if you alienate the hype you’ll get from internet geeks, you are going to severely limit your market to those people who don’t use the internet. Basically what I am hearing from Tag Heuer is this, “you picky geeks are always looking for a well functioning product and criticize the engineers. Look, you made Marcel and Antoine cry. Can’t you just be ok with a fancy looking phone that is nice to hold? Look at the nice carrying case, hand stitched by French union labor!” 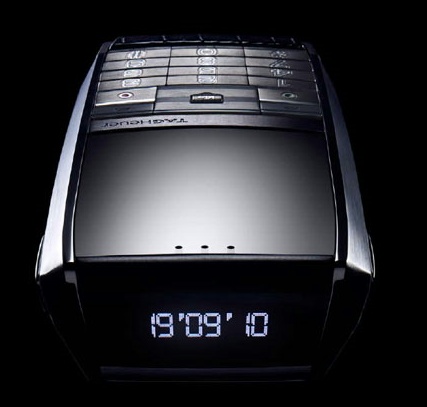 Nothing has been mentioned yet about the software running on the phone, but don’t expect too much. It will probably look pretty enough, and offer the basics along with the media playback. You can be guaranteed the phone will be GSM by the way. Perhaps Tag Heuer will have Modelabs will write their own software, or skinned a version of Symbian. This is speculation really, I just hope at the very least, Tag Heuer is able to take a Linux based mobile OS and make something decent out of it. You sure aren’t going to see Windows Mobile running on this device. Lets just hope it can do the basics well, and isn’t too much of a snob while doing so. As the device will have to last for several years at least, the battery should be user changeable, while the hardware should be enough to have the firmware upgraded for more sophisticated functionality. Lets hope Tag Heuer considered all of this.

Based on the configuration and materials (steel, rubber, leather trim available) used, the price for the Tag Heuer Meridiist will be between about $5000 – $6200. Expect availability soon. Tag Heuer teased us with concepts such as this (Tag Heuer Link watch based phone), but now we can stare at the real thing. Look for it starting September of 2008 at Tag Heuer boutiques and select locations where Tag Heuer watches are sold.