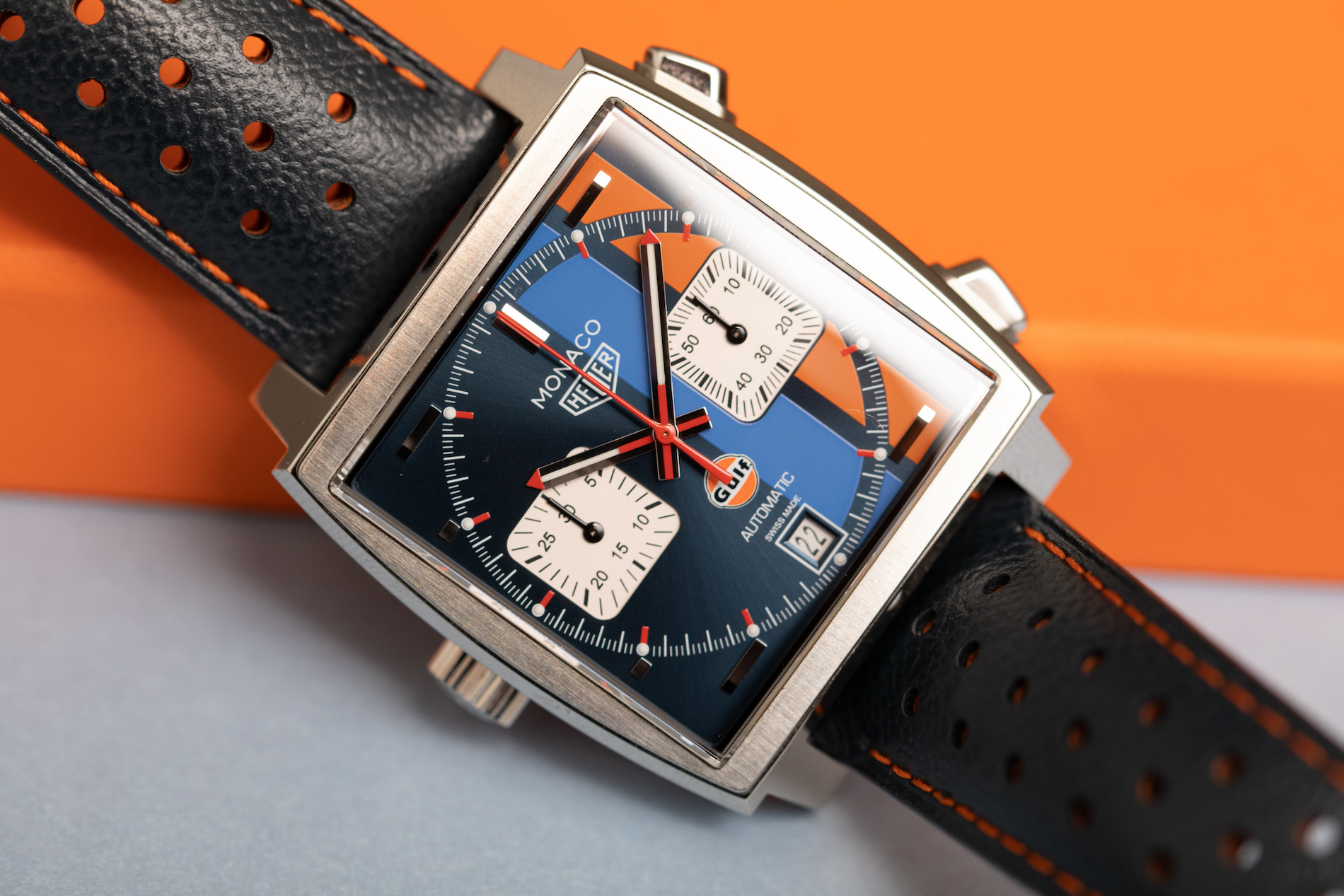 Gulf Oil’s relationship with racing, Steve McQueen, and TAG Heuer has had thousands of words dedicated to it. However, I don’t think that association fully explains why the design is just so appealing in an almost naively nostalgic way. At least, it always has been for me, personally. First off, I think it’s a miracle of modern branding that an association with an oil company leaves no negative implications in people’s minds. This is likely due to the fact that the company peaked during the middle of the 20th century. This is when the concept of automobile ownership and the American highway system became symbols of national prosperity. These were years far before issues like climate change. It was also before industry PR nightmares like the Exxon Valdez and Deepwater Horizon oil spills, and worries of over-dependence on foreign oil marked by the 1973 Oil Crisis. Also worth mentioning is the Gulf logo’s orange and blue color scheme. These colors were prevalent among mid-century modern design, which has certainly been ‘in’ for the past several years. (What Los Angeles resident hasn’t lustfully browsed Sunbeam Vintage?) As ubiquitous as Rudolph de Harak book covers are the almost-sherbet like oranges seen in old interior design photos or on episodes of Mad Men.

Starting in the 1960s, Gulf Oil chief Charles Whiteford and NBC chief Robert Kintner struck a deal in which Gulf would sponsor primetime “instant news specials. This agreement lasted the decade, all the way through 1973. The association of the Apollo 11 space mission and the Omega Speedmaster is one watch enthusiasts are very familiar with (understatement of the year?) but Gulf Oil was another brand to become indelibly tied to the moon mission… along with powdered astronaut juice, Tang.

Gulf Oil “presented” the news special, Gulf Oil ads ran during ABC’s coverage of the launch, and some anchor desks even had the Gulf Oil logo on them. The video above is a typical example of what I’m talking about. From 1963 to 1980, Gulf Oil had an agreement with Holiday Inn which was America’s biggest hotel chain. They agreed so the hotel accepted Gulf credit cards and Gulf set up gas stations at the hotels. I know this isn’t the sexiest branding tale, but these Holiday Inn/Gulf Oil locations were everywhere. They really dotted the entirety of the US Highway system. It would be near impossible to not associate road trips, vacations, and long drives with these two iconic brands. These fell in popularity near the end of their lifespan, but Gulf Oil garnered goodwill during these years. Most watch enthusiasts and brands rightfully focus on Gulf racing. However, I did want to discuss how the Gulf Oil brand transcended the Oil business. The result of this made for lasting and quirky partnerships. How I Wore The Tag Heuer Monaco Gulf

I had this watch during Summer, so making an outfit work with it wasn’t hard. You’re really good to go with any short sleeve shirt, polo, or a cuffed long-sleeve shirt.

I really wouldn’t wear it with a standard business suit, though. However, the right dressed down or summer suit works well with this. In fact, I did wear it with an unstructured light blue cotton-linen suit (no tie, casual button-down shirt) and it looked great. I wish I had matched my socks with the watch, in retrospect. I wore the watch while I was at the Pike’s Peak International Hill Climb in Colorado Spring where I really was bested in the matching fashion department by a fellow writer who had a vintage leather Heuer jacket that really just put most others to shame. That  won’t count that as an everyday pairing though.

*This is a new review feature that I am considering adding to my reviews. The idea came to me once I had sent the Monaco Gulf back to TAG Heuer, but I’ll incorporate photos hereafter. Let me know what you think. The Monaco Gulf edition is an unusual piece to think of exact comparisons to. The first would just be to the standard Monaco, so the scope covers competition to the Monaco line altogether. I have to say that at $5,900 the Monaco is a lot of bang for the buck. I know there are a ton of incredible and formidable chronographs out there (Omega Speedmaster Moonwatch & Zenith El Primero to name some obvious ones in this price range) but personally, I’d rather have the Monaco Gulf be my go-to chronograph since it just can’t be beaten in terms of pure character. There are many Speedys and Zeniths out there that will please chronograph lovers. However, the closest competitor for the Monaco could be another TAG Heuer. The TAG Heuer Monza was re-released as a 40th-anniversary reissue back in 2016 and it was nothing short of a black PVD stunner. We covered the Monza quite a bit when it was first released, but it still flies under the radar. The color of the Monaco Gulf is  the visual opposite of the dark style of the Monza, though. Then again, the $5,450 price makes it a tiny bit of a better deal than the Monaco. Named after the eponymous Italian “Thousand Mile” race, the Chopard Mille Miglia has been a quirky chronograph that’s been a surprisingly affordable entry to Chopard. Funnily, Chopard does have their own “Monaco” in the form of the Grand Prix De Monaco Historique watch, which evokes similar racing-inspired aesthetics but in an overall more refined racing chronograph package. At $6,000, the Mille Miglia and $7,390 for the Grand Prix De Monaco Historiques, both cost more than the TAG. The Chopard has a more “European” feel over the TAG, in my opinion. Then of course, the classic round case shape brings it back to a matter of taste. While not similar, I think these Chopard watches tap the same deep relationship between watches and racing. In terms of style, TAG Heuer and Glashutte Original are nothing like each other. I immediately thought of the Original Sixties Iconic Square Watches as competition for the Tag Heuer Monaco. These retro-inspired cushion-shaped chronographs camee in a variety of colors though in limited numbers. This goes to show how difficult it really is to find truly originally designed, fun, square/cushion shaped chronographs. Price is significantly more, though the second-hand market appears to have some healthy discounts on the retail price of $9,700. This one is a longshot, but a pick that just made immediate sense to me. The Bell & Ross BR-03-94 Aero GT Orange goes in the opposite hyper-modern direction rather than the classic, vintage-inspired Tag Heuer Monaco Gulf. The watches are square shaped chronographs that are exploring some similar color palettes but in their own way. Thinking about these two makes me remember why I love watches so much, honestly. Such different yet cool interpretations of racing-inspired timepieces that are immediately recognizable and serve as models of their brand identity. Price for the Bell & Ross is a bit more at $8,800.

Some more affordable alternatives for the Tag Heuer Monaco Gulf  just happen to both be from Zodiac. These two models are the Grandrally and the Sea Dragon Chronograph.

The Tag Heuer Monaco Gulf is one of my favorite everyday wear watches out there, period. That’s saying a lot because it’s a chronograph that isn’t slim. Those are two factors that often negatively impact my opinion on a watch. I am charmed each time I try on the Gulf because of the personality and character. Again, price for the Tag Heuer Monaco Gulf Special Edition is $5,900 and you can check it out at the Tag Heuer website.

Necessary Data
>Brand: Tag Heuer
>Model: Monaco Gulf Special Edition
>Price: $5,900 USD
>Size: 39mm x 39mm (47mm lug to lug) and 15mm thick
>When reviewer would personally wear it: Honestly, this and my Rolex Explorer II would be in fierce competition for my everyday watch that can be dressed up for most occasions.
>Friend we’d recommend it to first: Someone who is ready for their second or third luxury watch, and might be dipping their toes into the chronograph world.
>Best characteristic of watch: The style and finish.
>Worst characteristic of watch: I know the thick crystal bugs some people. I don’t personally think it’s a problem, at all.