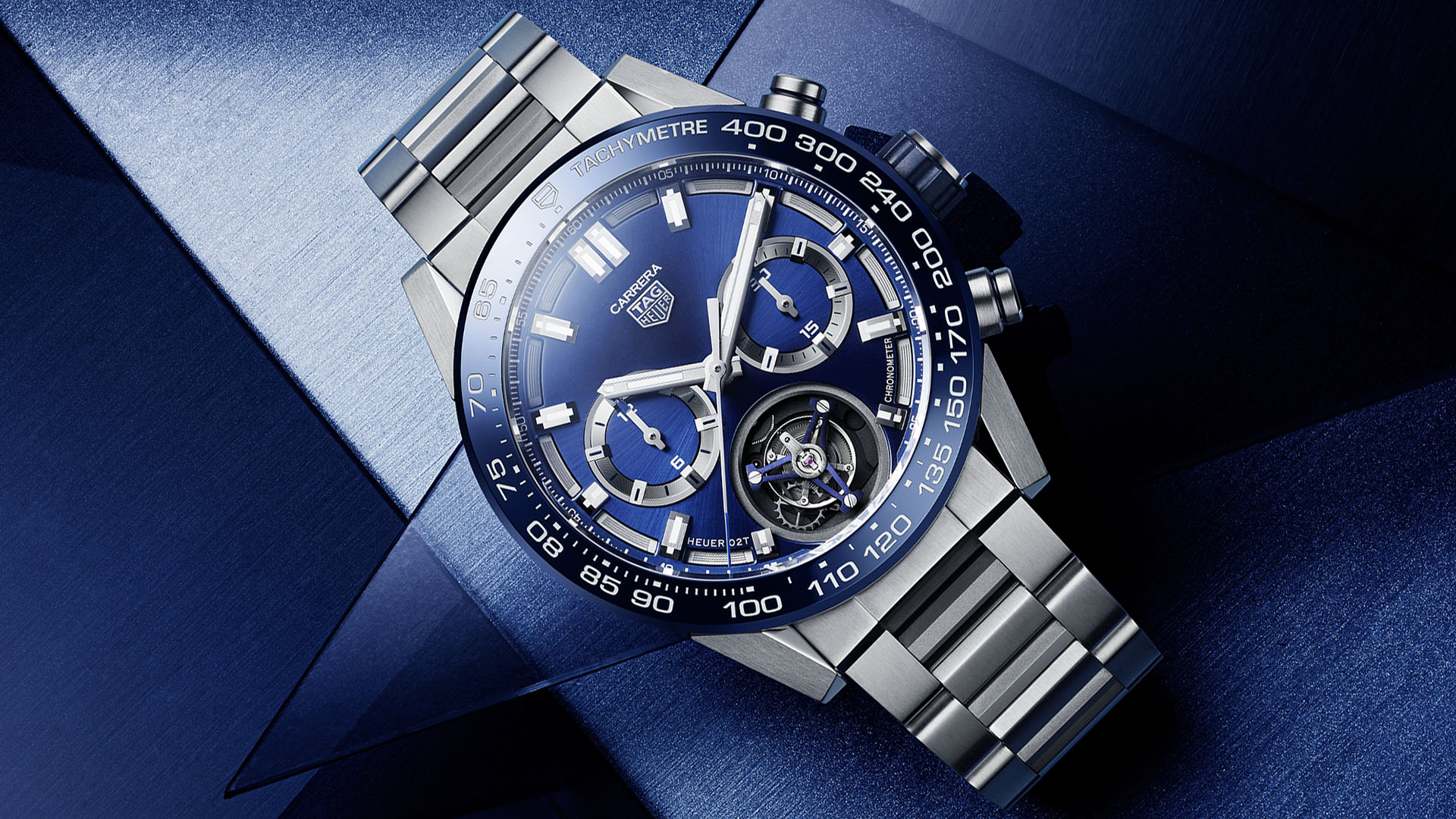 In today’s hyper-competitive luxury watch market, brand marketing and strategic positioning can be every bit as crucial to a company’s success as its actual products. Over the past several years, TAG Heuer’s strategic development has centered around its in-house Heuer 02 movement, as the proprietary automatic chronograph has made its way inside designs on both the classic and contemporary sides of the brand’s catalog. While the allure of an in-house, vertical clutch, and column wheel equipped automatic chronograph movement is powerful on its own, the brand has boasted a crown jewel in the Heuer 02 line since its very beginning (actually predating the standard Heuer 02’s rebranding from its previous incarnation as the Caliber CH80).  The Heuer 02T marries this manufacture design to one of the most affordable tourbillons in the Swiss industry, creating a rare but genuinely formidable competitor in its price bracket. TAG Heuer has returned to the Heuer 02T for 2021, bringing a cleaner new look inspired by 2020’s Carrera Sport Chronograph line and a full titanium bracelet. While moving slightly upmarket from some of its predecessors in price, the new limited edition TAG Heuer Carrera Heuer 02T in titanium and blue offers a subtler and more refined package that still punches far above its weight in terms of amenities.

Measuring in at 45mm, the Grade 5 titanium case of the new TAG Heuer Carrera Heuer 02T is likely far from a shrinking violet on the wrist. This bulky, aggressive interpretation of the classic Carrera form is shared with other recent TAG models including the Connected and the Carrera Heuer 01, with hallmarks like wider attached versions of the angular lugs that maintain the signature Carrera polished inner bevel. The tachymeter bezel is rendered here in a deep royal blue ceramic with a bright polish in initial images, adding a touch of durable flash and color to the mostly matter case design. Interestingly, TAG Heuer has rubberized the crown here, in a left field concession to ergonomics that may help with grip in wet environments. That said, the Carrera Heuer 02T is far from a diver, with a somewhat sporting 100 meters of water resistance. 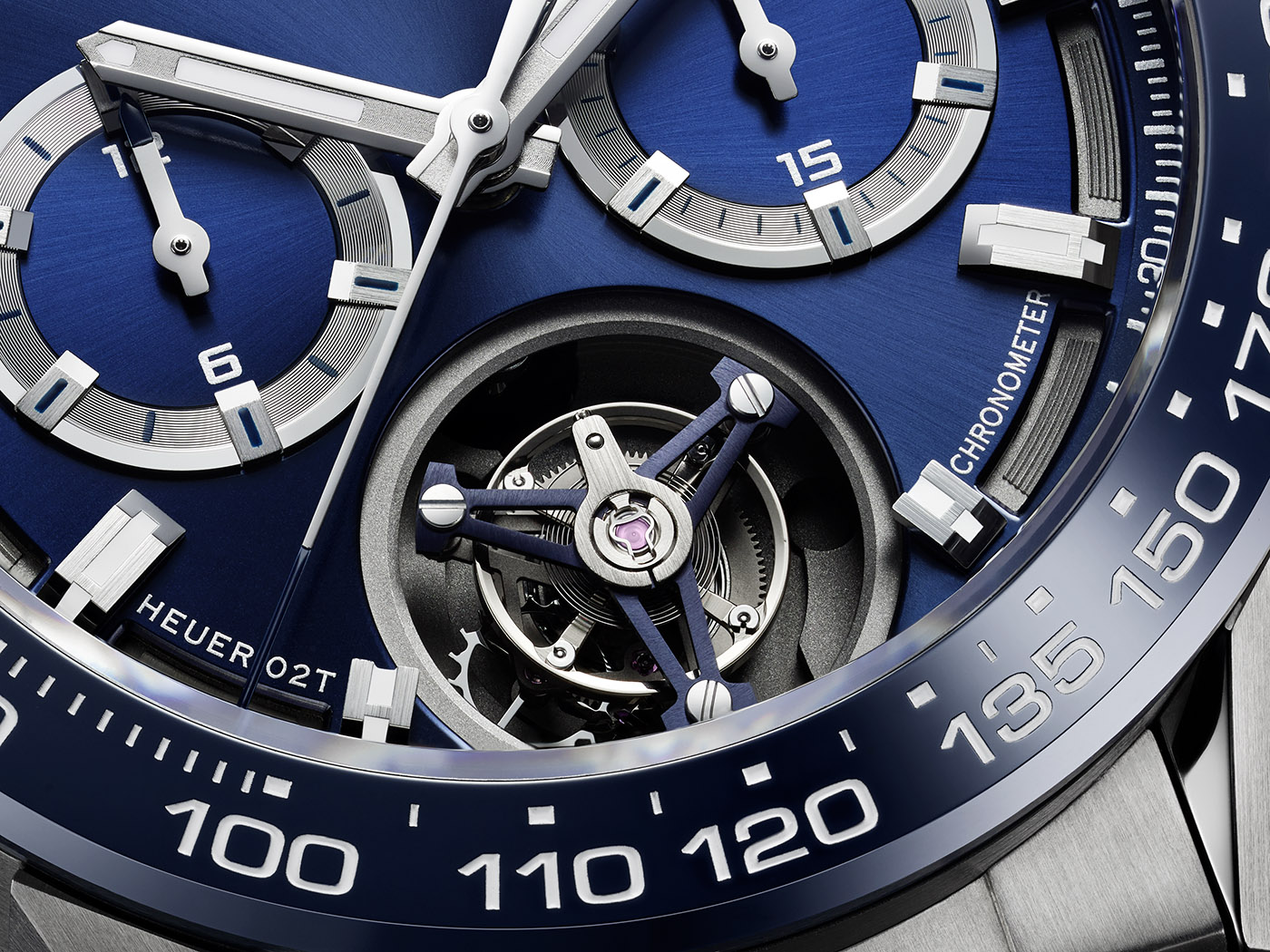 The dial of the new TAG Heuer Carrera Heuer 02T is where the new model takes its most serious departure from previous iterations. Other Heuer 02T equipped designs have been skeleton dial concepts, offering an ultramodern glimpse into the working structure of this in house movement. Here, however, TAG Heuer opts for a simpler and more classical approach, more closely tying in with the brand DNA of the centerpiece Carrera Sport Chronograph collection. The steely blue shade of the dial is an exact match for the blue Carrera Sport Chronograph, but TAG Heuer equips the Heuer 02T with a more common sunburst pattern rather than that model’s distinctive radial brushing. Other subtle differences help to separate this design from its more pedestrian cousin, including a matte central stripe on the pointed baton hands instead of the classic black line, along with contrasting silver azurage outer rings for the chronograph subdials with inverted miniature versions of the sloping rectangular hour indices. While most of this added visual detail works nicely and rewards second glances, the skeleton cutouts surrounding the hour indices are likely to be divisive elements. These cutouts don’t seem to highlight any mechanical detail of the movement in particular, and arguably just disrupt the flow of the sunburst dial pattern. 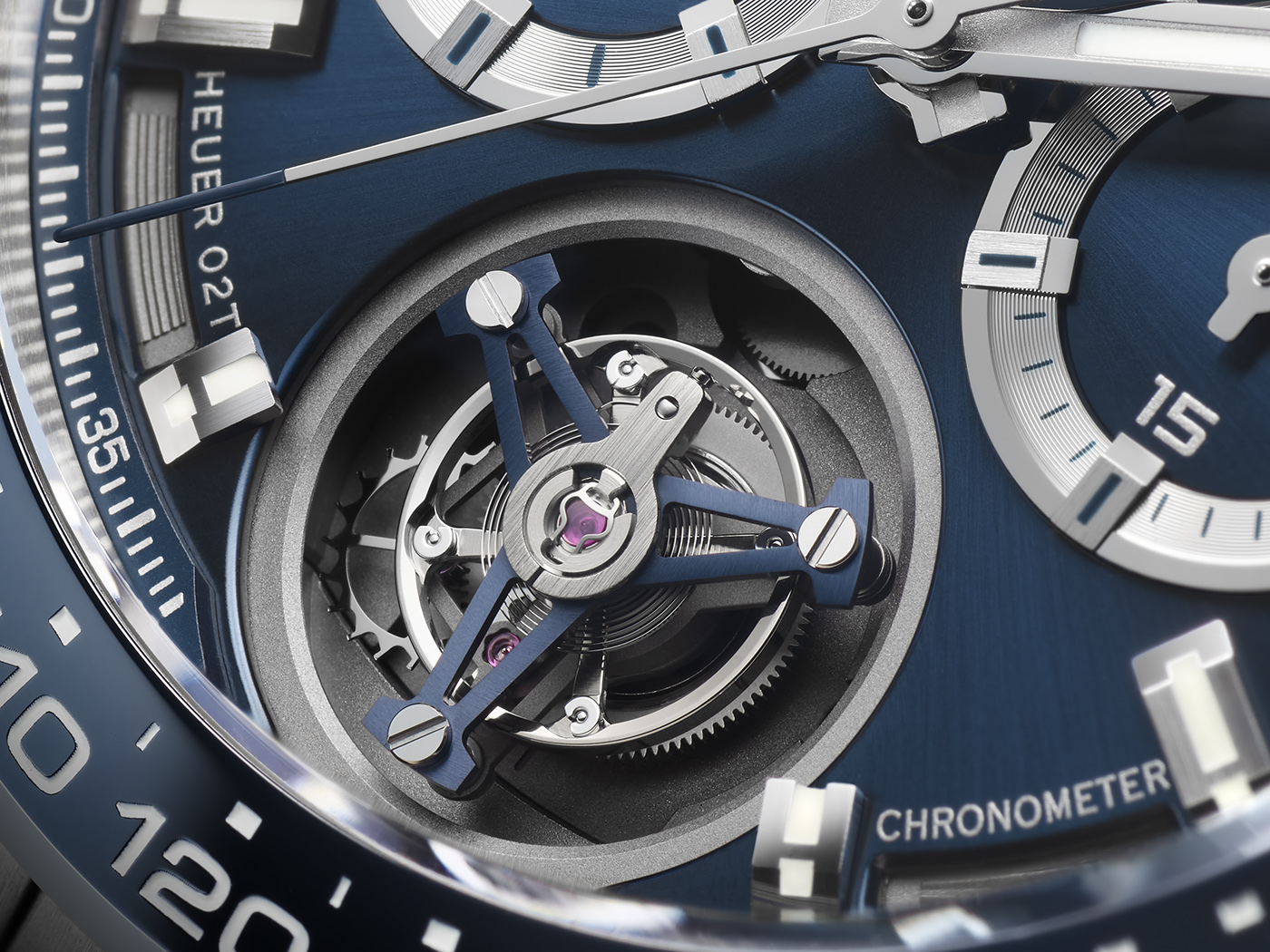 Of course, the real visual centerpiece of the dial is the 6 o’clock flying tourbillon. TAG Heuer showcases its tech-forward modern design sensibilities clearly here with an unorthodox tourbillon cage. While most cages are works of classical jewelry unto themselves, featuring intricate designs in brightly polished metals, TAG Heuer opts for a streamlined skeleton cage in carbon and blued titanium. It’s a decidedly more purposeful, futuristic look that serves the overall style of the Carrera series well. 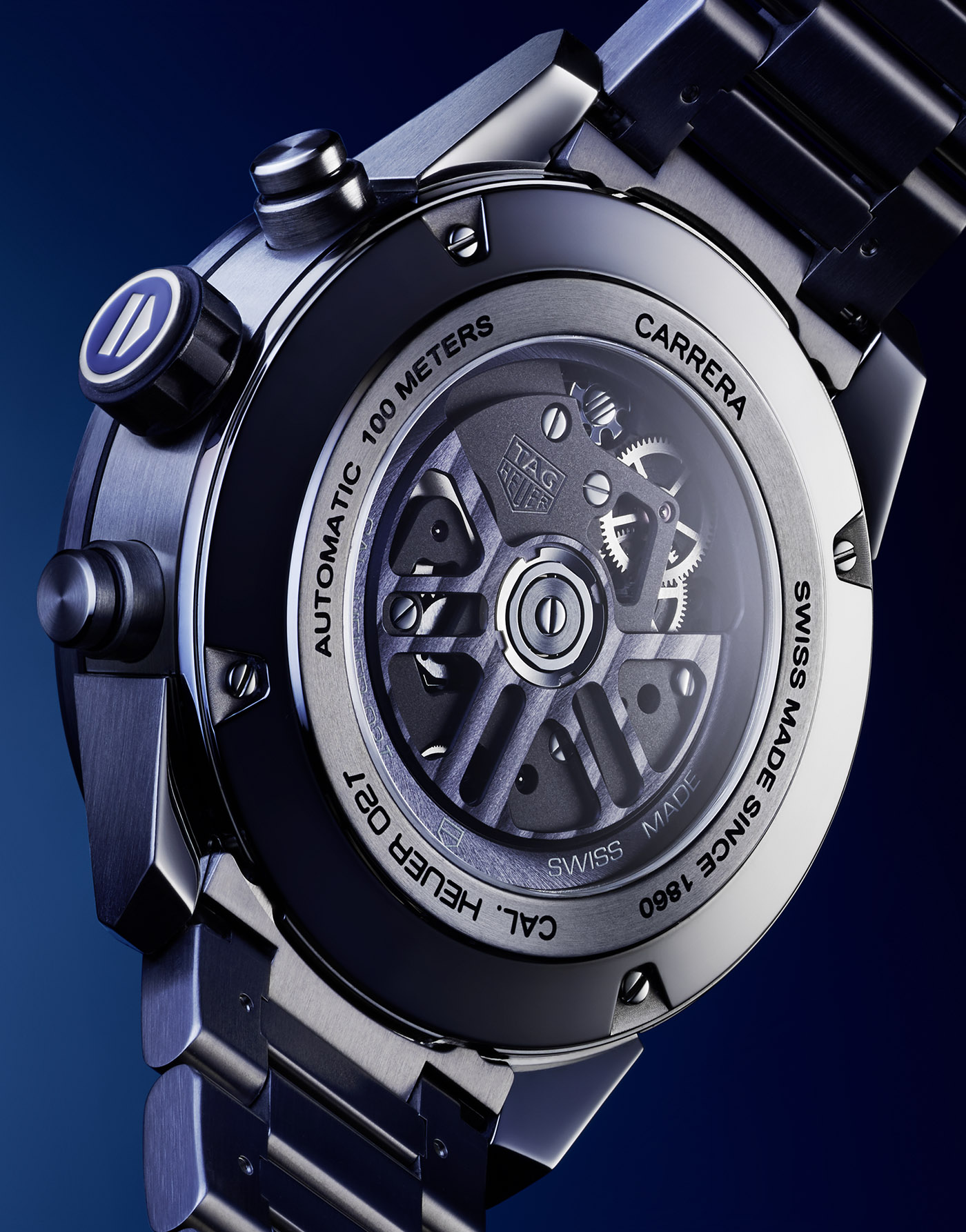 Naturally, TAG Heuer powers the new Carrera Heuer 02T with its in house Heuer 02T automatic tourbillon chronograph movement. This is arguably TAG Heuer’s crown jewel movement, and the specifications reflect that, adding COSC certified chronometer accuracy, a column wheel and vertical clutch actuation system, and a 65 hour power reserve at a 28,800 bph beat rate to the 6 o’clock tourbillon on display. Where this diverges from most movements with these features, however, is in its finishing. Most tourbillon equipped movements are heavily and intricately decorated, but TAG Heuer chooses to aim for a cleaner and more modernist look. The bridges are finished in a deep matte graphite gray, while the skeleton rotor offers the most extensive decoration with deep blue PVD and Côtes de Genève. The column wheel also receives a coat of blue PVD, smoothly highlighting this coveted element. 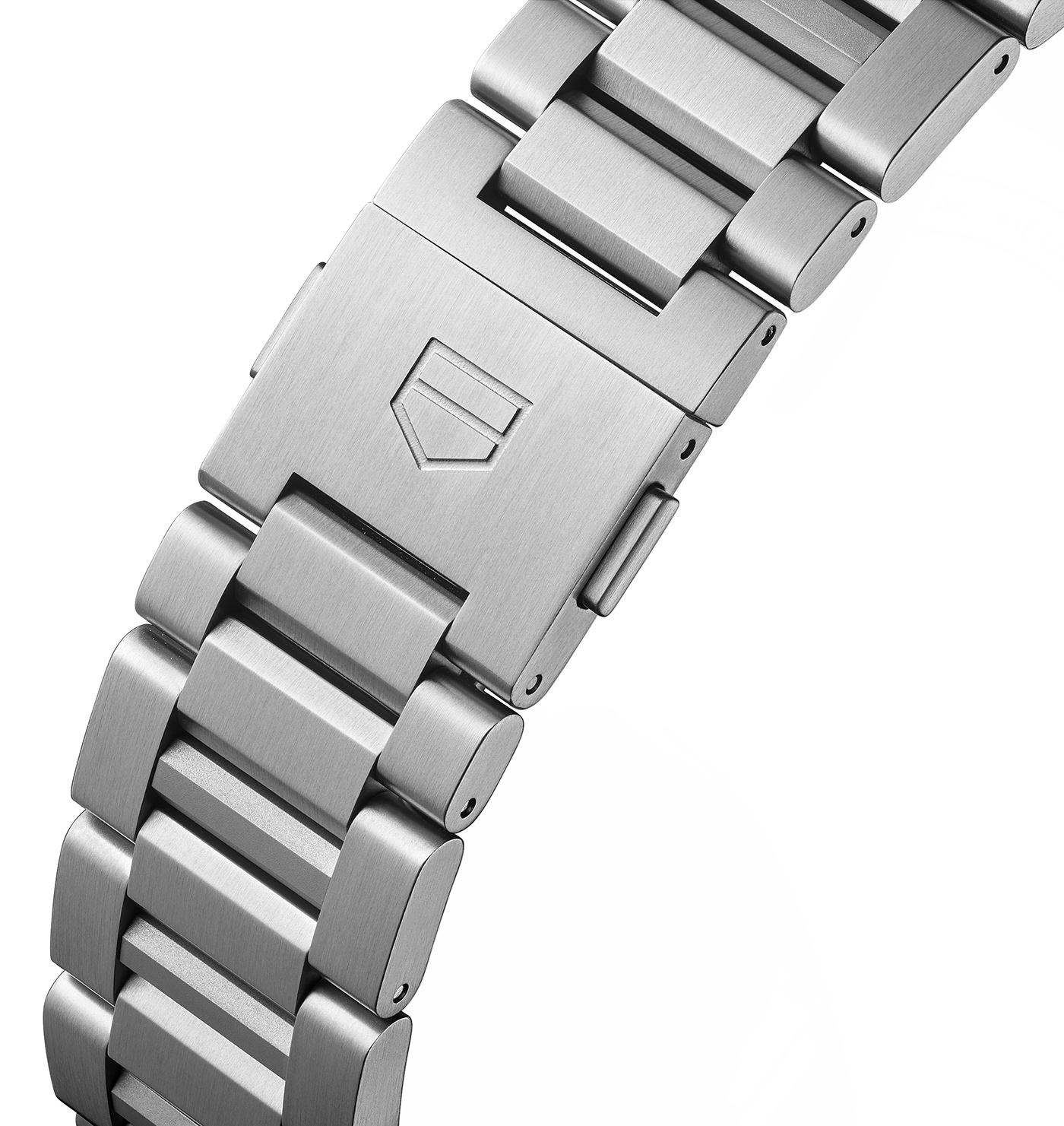 In keeping with the new titanium case, this new variant of the TAG Heuer Carrera Heuer 02T is fitted with a full titanium bracelet for the first time. The brand uses its modern, angular take on the classic H-link pattern here, offering a solid mix between brushed surfaces and polished chamfers in initial images. The bracelet is fitted with a two button signed folding clasp. 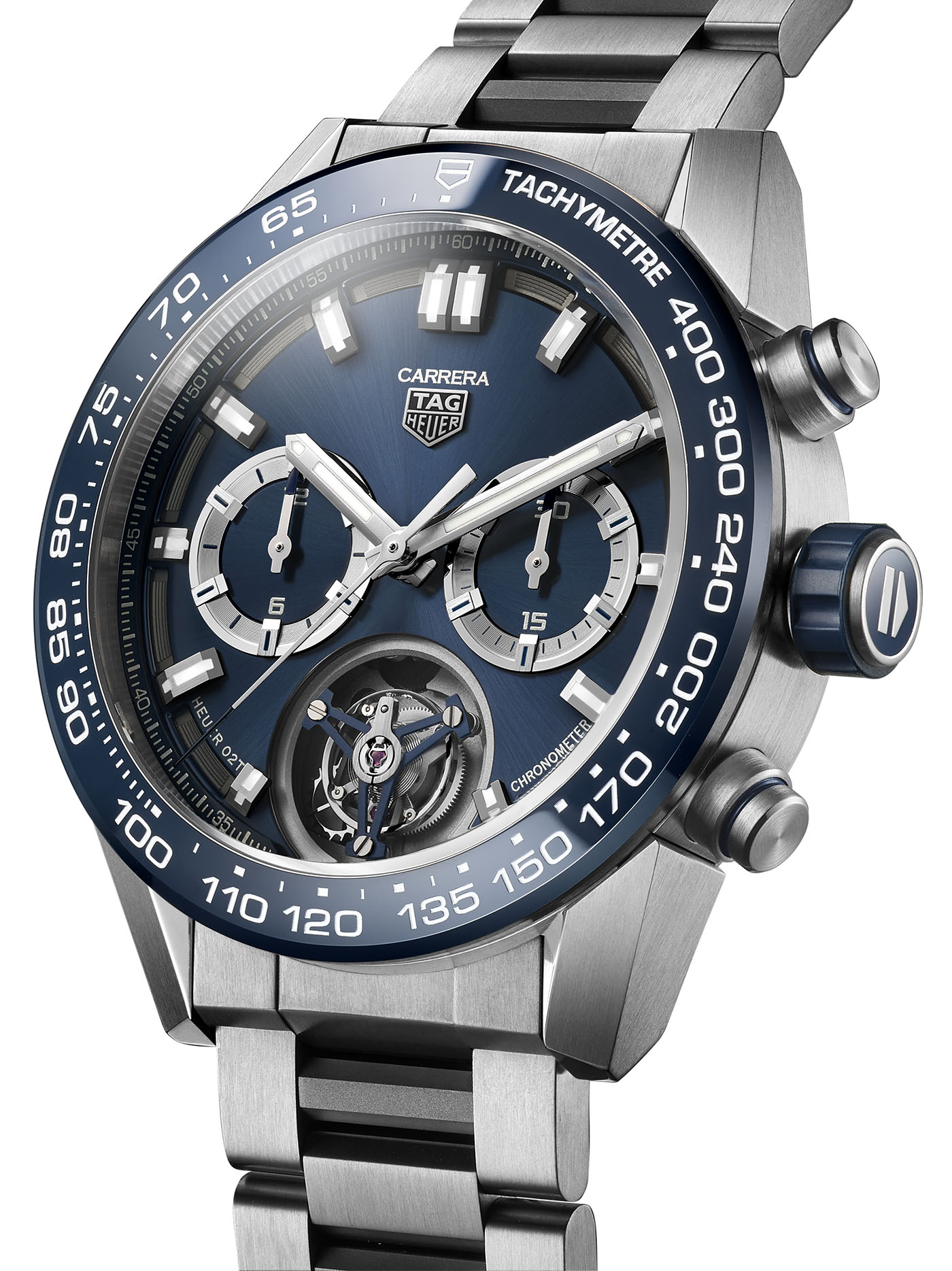 With a cleaner look more closely tied to its stablemates and a slightly more traditional package, the new limited edition blue and titanium TAG Heuer Carrera Heuer 02T still packs a massive horological punch and serves as a dramatic halo for the Carrera line. This new TAG Heuer Carrera Heuer 02T is limited to 250 units, available now through authorized dealers at an MSRP of $21,500. For more details, please visit the brand’s website.