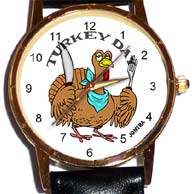 In accordance with the sentiments of the day, I wish to thank the Internet for bringing me that which I would otherwise be without. If it was not for the internet, myself, and likely many of you, would not be interested in watches or have the material to fuel our appreciation. With the Internet, watches, people, and places so far away, are instantly accessible to us. What was once a rare and isolated timepiece can now be shared with so many.

It was in about 2002 that I started surfing the net for visuals of watches as my interest in timepieces grew. At the time, I knew of only a handful of watch makers, and had but the faintest idea of where to buy such watches. In time, I was able to discover so many brands, models, styles, and places to purchase, that it is now a full fledged hobby as opposed to idle interest. That combined with the buying and selling power of eBay spelled out that I would be hooked. The commercial side of the internet really brought back the notion of owning a rare and interesting watch. Traditionally, only the most wealthy could travel to those cities that held the exclusive distributors of various watch makers. If you could not afford to do this, or didn’t know about these small shops, you were left with only the mainstream products.

Now small shops and individual sellers have the ability to reach the widest of potential buyers. Pricing has been becoe competitive again, and new watches are being released with a new found fury. Let us not forget how much this has helped the mechanical watch revolution. There was a time, when all agreed that the mechanical watch was dead. With the inexpensive costs and reliability of the quartz movement, mechanical watches seemed to have no hope. Even though mechanical watches bounced back in the early 90s to an extent, I believe it was the advertising and distribution power of the internet that showed the greatest possible audience that mechanical watches had a value and pleasure of ownership above that of quartz watches which often seem to have a rather hollow and uninteresting soul.

So thank you Internet for bringing us all together and giving us so many watches to want, that we may never own or even see, but we know they are out there.  Happy Thanksgiving.