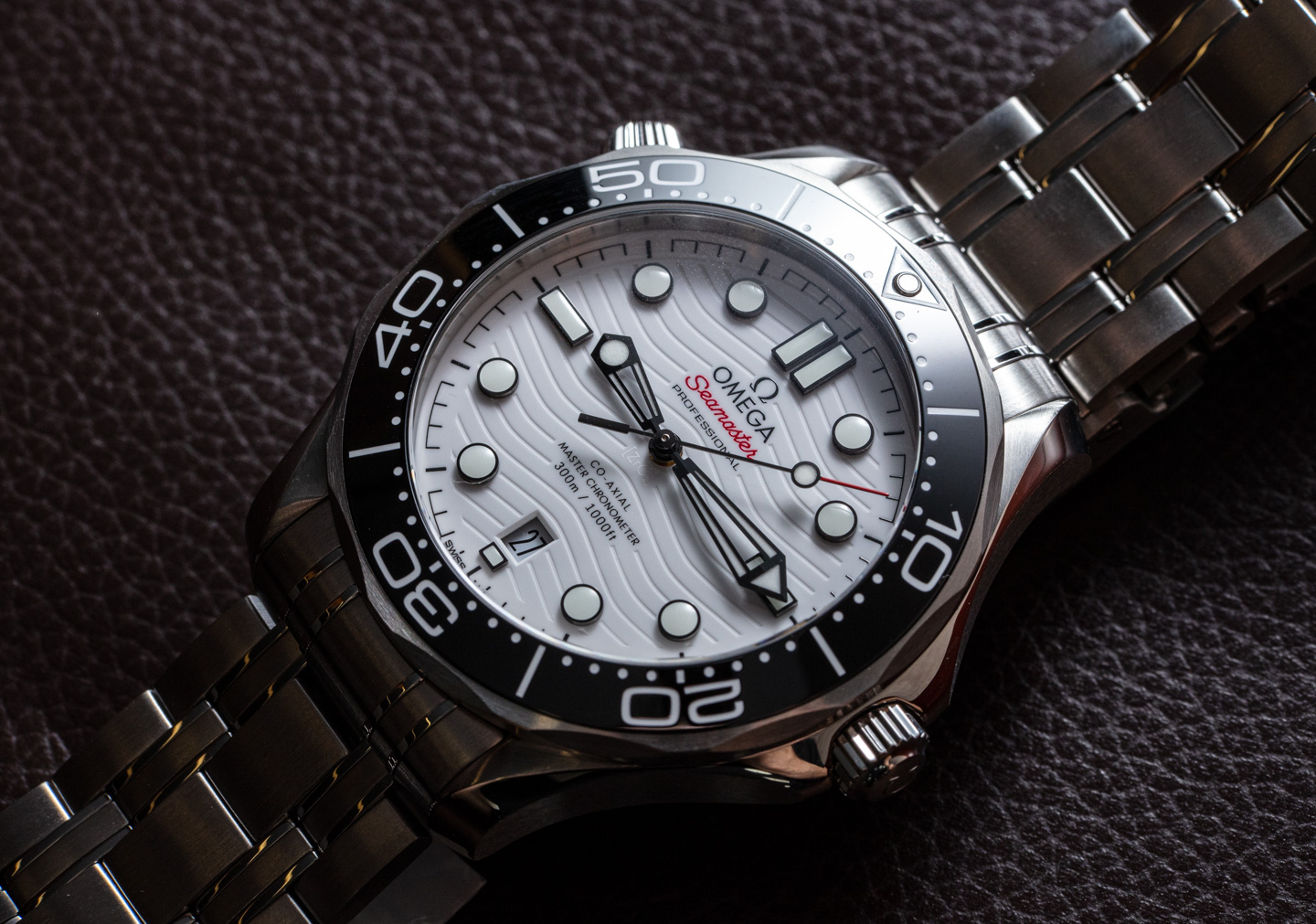 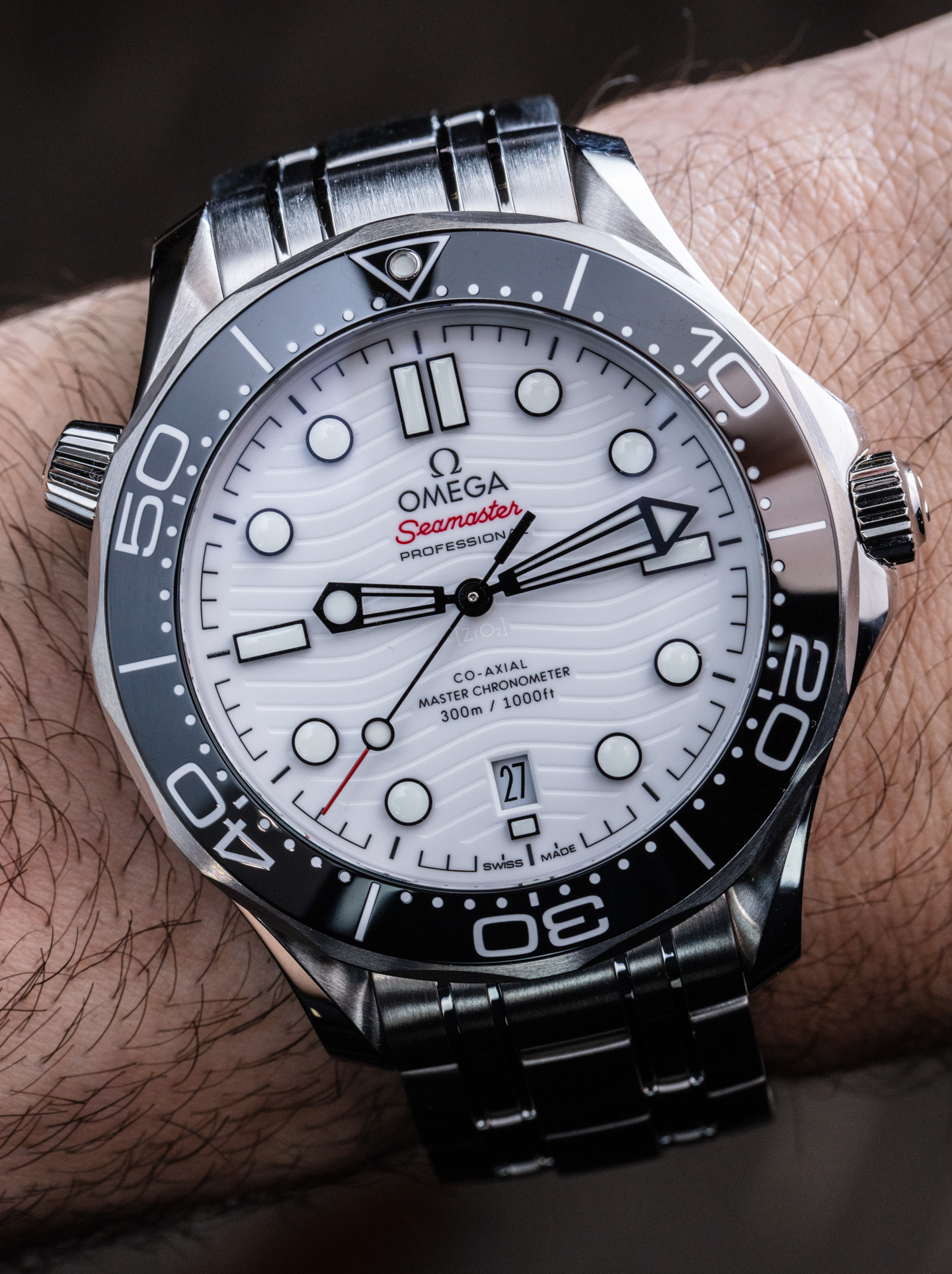 Color matters more than ever in the realm of fine watches. It isn’t just that consumers are interested in an ever-expanding palette of available choices, but also that sometimes a watch doesn’t catch your eye until it is offered in just the right color combination. Marketers have long known the value of choosing the right colors, and yet selecting among the many appealing color combinations out there can be a trying task. For that reason, we can all love Omega for the many, many colors they have experimented with on their watches. No two are more important for this Swiss watch brand than black and white.

The famous Speedmaster is among the most famous black and white dial watches ever — as are most versions of the Rolex Submariner. Omega has an interesting legacy with black and white watches including those that are exclusively in either black or white and some that mix the two. This particular iteration of the modern Omega Seamaster 300M is a great example of Omega mixing the two, making for a very handsome “cookies and cream” aesthetic — with a dash of red for good measure, that is. 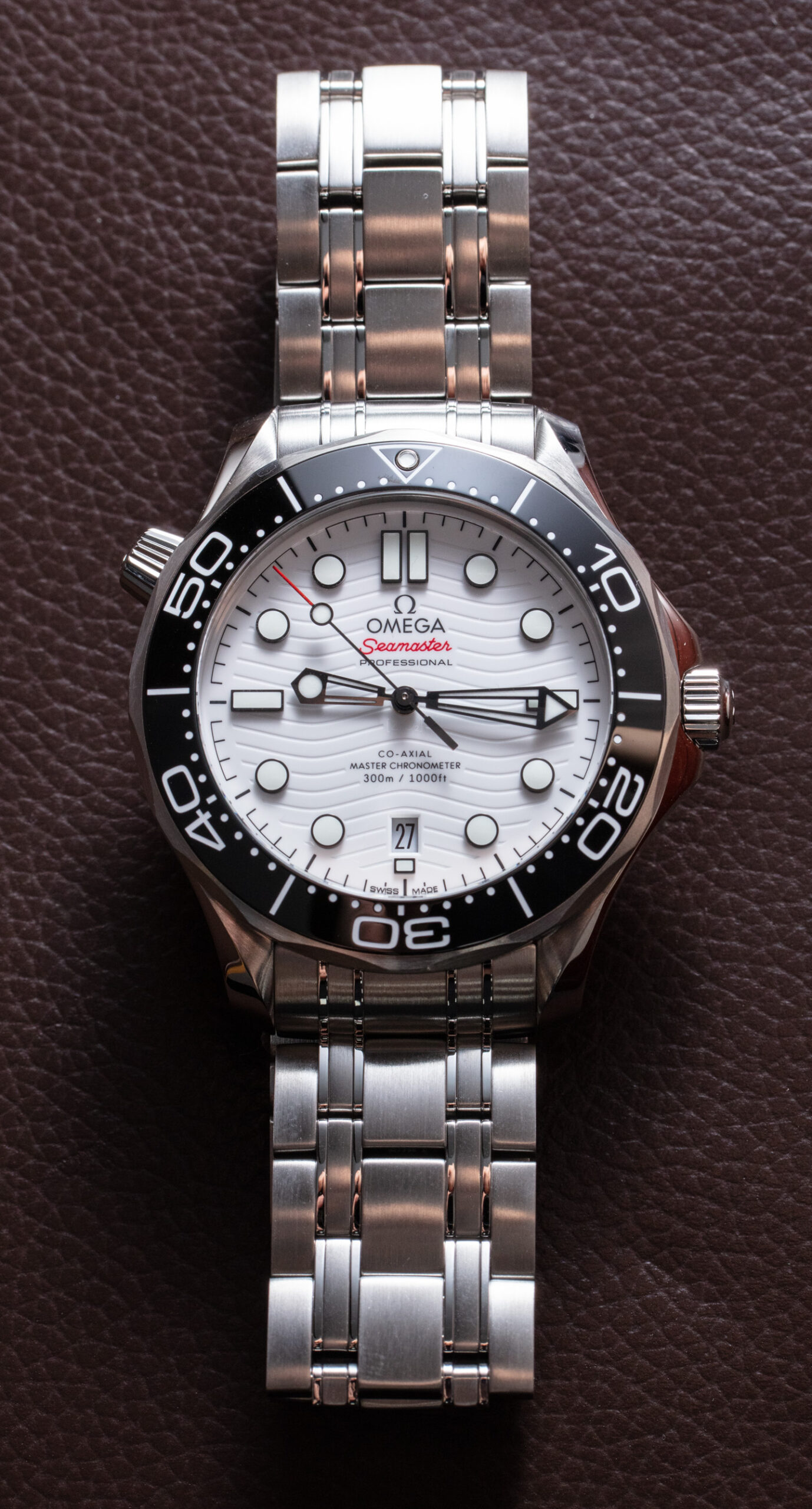 Back in 2019, Omega originally debuted this updated Seamaster 300M Co-Axial Master Chronometer (aBlogtoWatch review here). The new-generation model was built on a classic introduced in 1993 by Omega to be the “non-Submariner clone” alternative luxury sports watch. The latest generation Seamaster 300M has a slightly larger case (42-43.5mm-wide depending on how you measure it) and a high-tech METAS-certified in-house-made Omega caliber 8800 automatic Co-Axial escapement-based mechanical movement. The 4Hz movement has a power reserve of 55 hours and is more or less immune to magnetic interference given its use of a-magnetic components such as non-ferrous metals and silicon parts in the regulation system.

Even though Omega makes a number of diver’s watches, each of them has a very different personality, along with a different case style. What calls people’s attention to the Seamaster 300M is the distinctive dial style, the signature placement of the manual helium release valve at the 10 o’clock position, and the elegant curves on the case. In fact, I sometimes argue that the current Seamaster 300M looks better on the rubber strap than the matching steel bracelet – because of how much better you can see the shape of the case when it is paired with the strap. 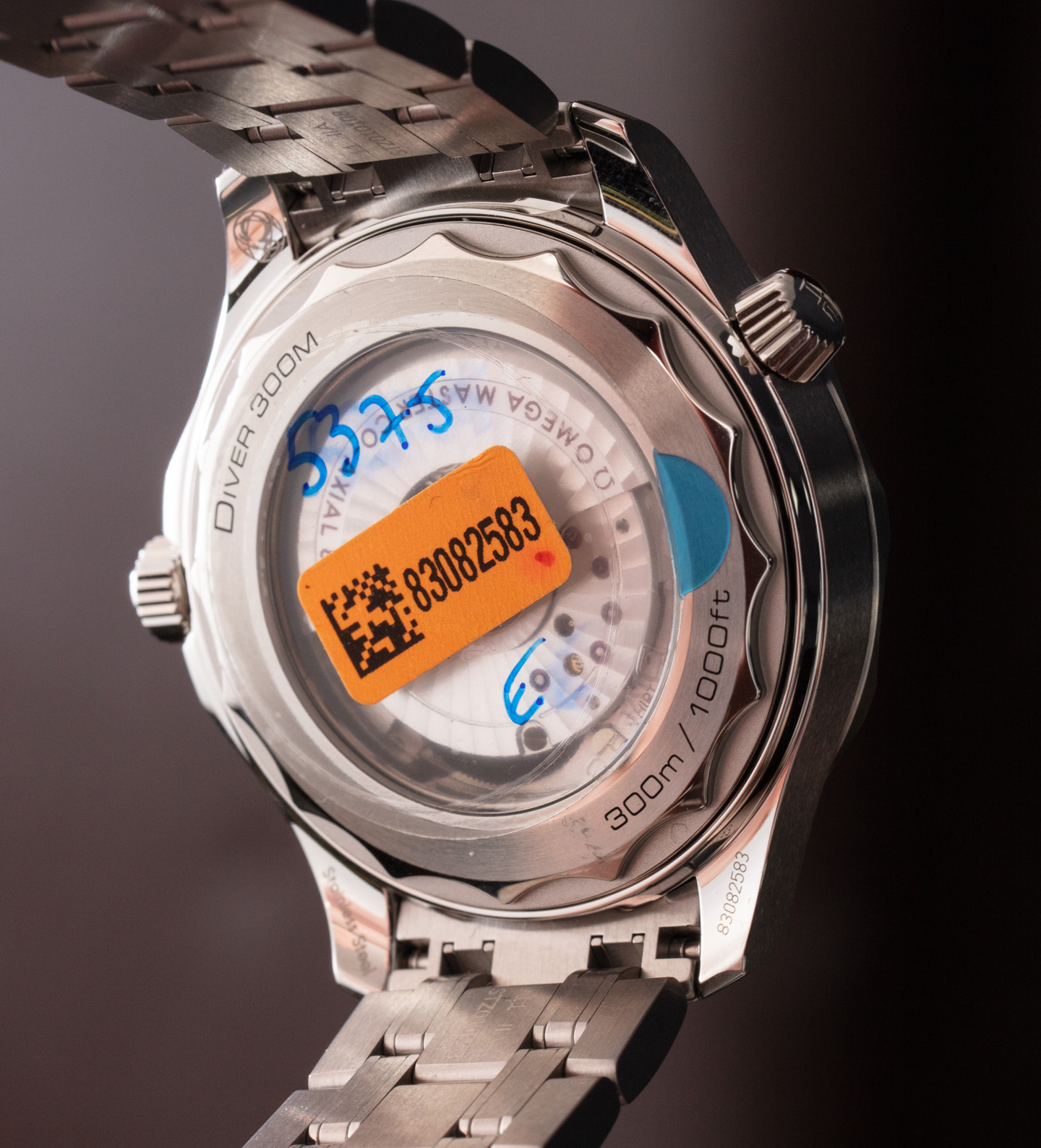 With the white dial on this reference 210.30.42.20.04.001 (reference 210.32.42.20.04.001 on the strap), the Omega Seamaster 300M looks a bit larger on the wrist, while offering an extremely high level of legibility. Traditionally, the issue with white-dial sports watches was poor legibility due to low-contrast hands. Here Omega not only applied the markers along with the hands but they are bordered in black (with white-colored interiors) which help them pop off the dial. This also looks particularly nice as the base dial is in white zirconium dioxide ceramic. Another white-dialed Omega sports watch I like was the Speedmaster Professional Alaska Project (aBlogtoWatch review here), which happened to shoot up in consumer value over the last few years.

Also in ceramic is the insert ring for the uni-directional rotating bezel. Most people wouldn’t immediately realize that this watch makes use of two different colors of ceramic — and it isn’t even one of the actual ceramic Seamaster 300M watches (of which there is a new one for 2021). 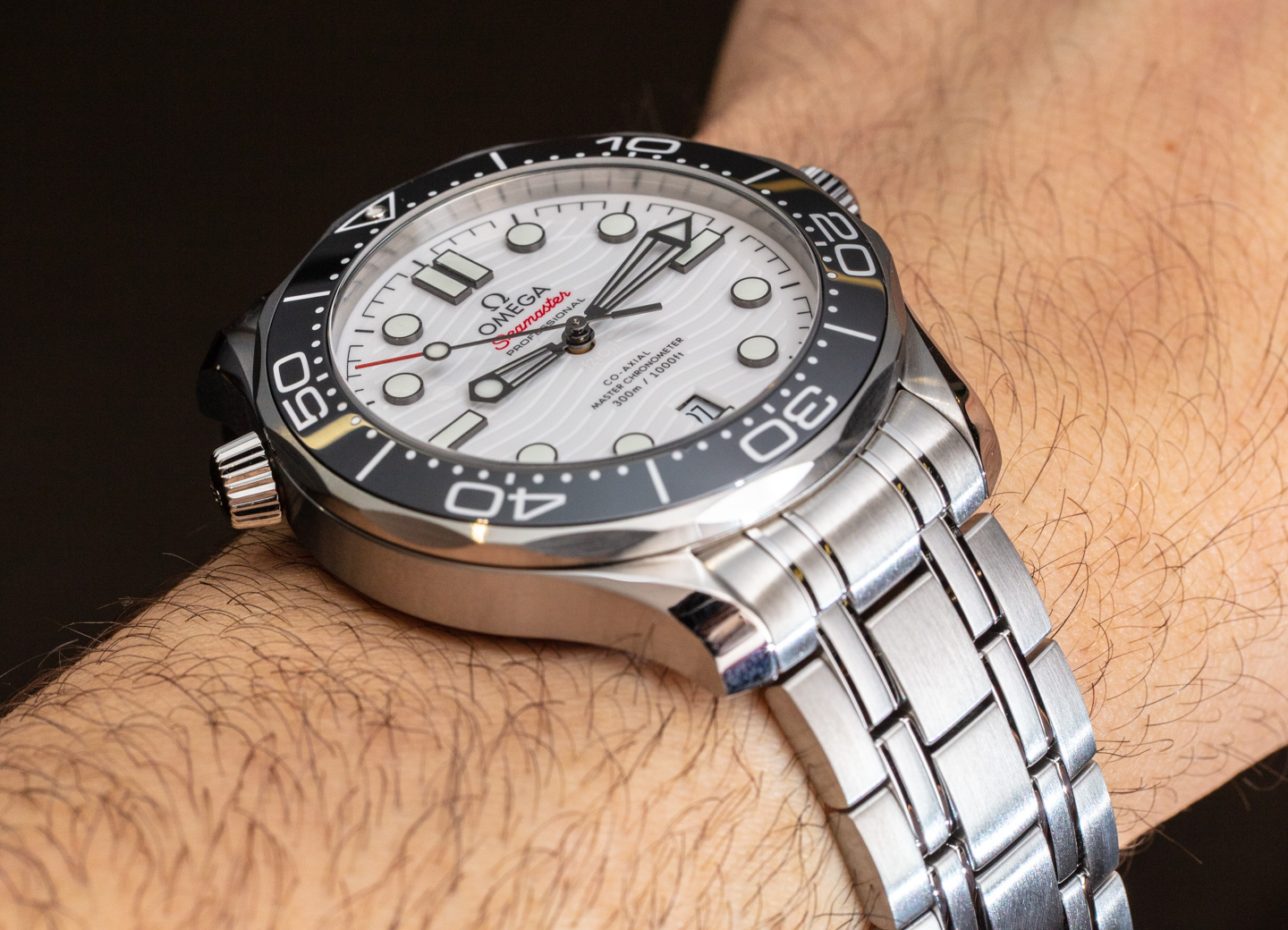 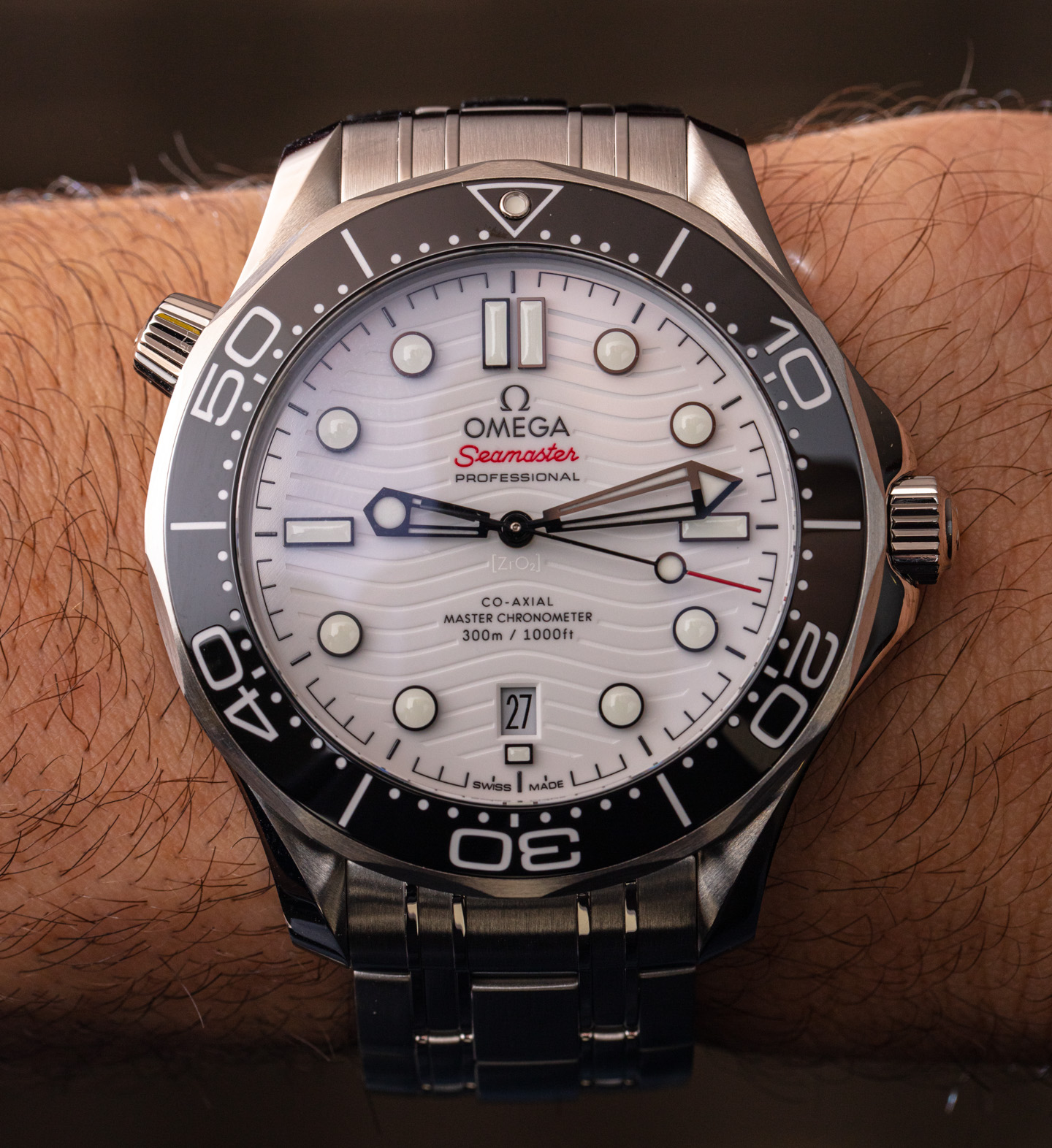 In addition to the Seamaster 300M being engineered like a serious diver’s instrument, what I like most about this high-end timepiece collection is that it doesn’t look like anything else on the market. A major reason consumers are comfortable spending luxury dollars is for identification value. In other words, they like the idea that others will be able to identify what is on their wrist — something you can easily experience with a Seamaster 300M.

With the white dial, the modern Seamaster 300M Co-Axial Master Chronograph simply has a different personality from that of the same watch in other dial colors, such as black or blue. There are going to be some people who idly appreciate the Seamaster 300M family until they stumble onto this model — and then must simply have one. Price for the Omega Seamaster Diver 300M Co-Axial Master Chronograph 42mm reference 210.32.42.20.04.001 watch on the strap is $4,900 USD, and the reference 210.30.42.20.04.001 on the matching steel bracelet is $5,200 USD. Learn more at the Omega watches website here.