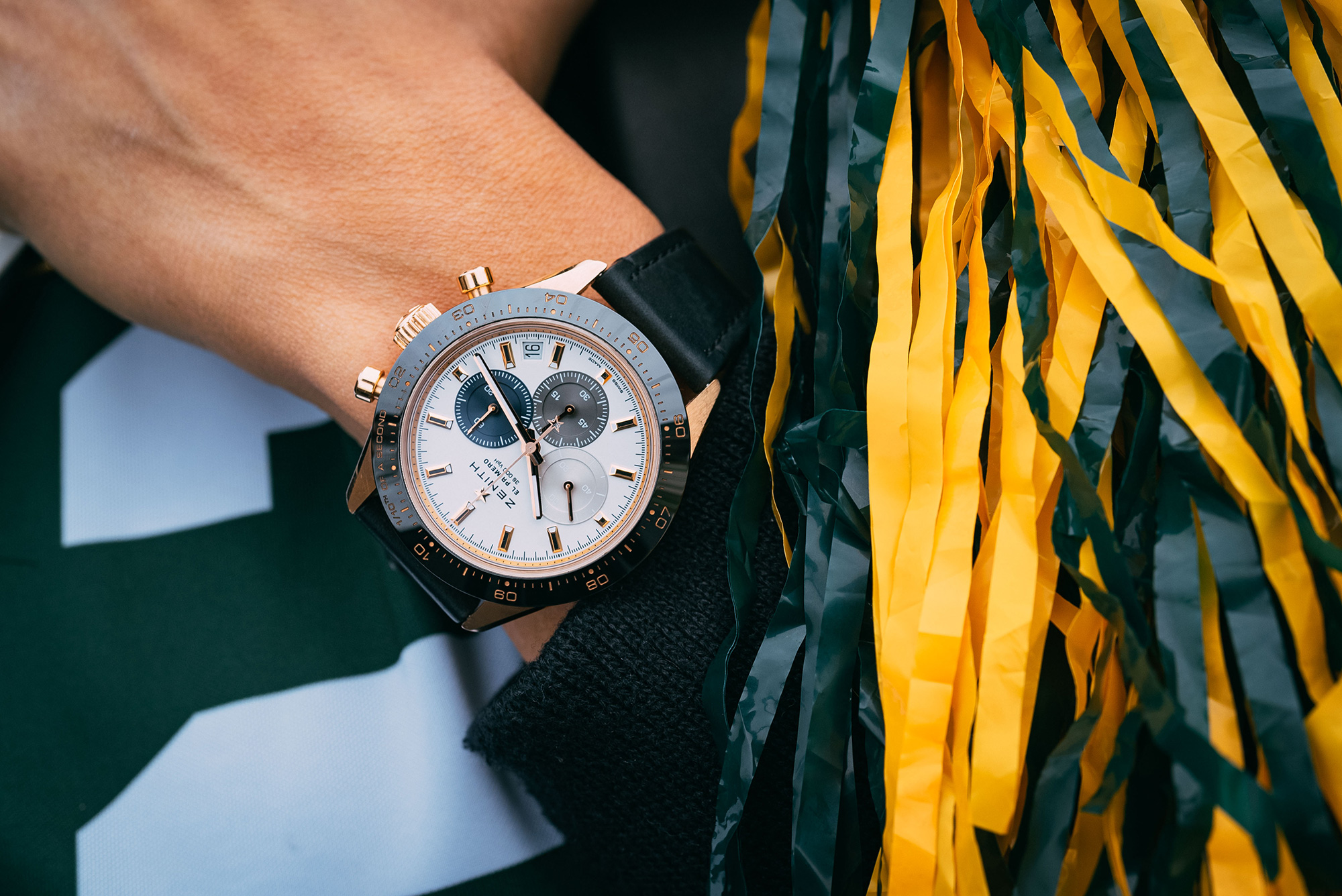 It’s a brisk, late-autumn Sunday morning in Green Bay. The Packers are playing at home today, and I don’t know if I’ve ever seen more green and gold in my life than at this very moment. I’m in town for the weekend as a guest of the lovely folks at Zenith, to celebrate their nearly two-year-long partnership with Packers quarterback Aaron Rodgers, and right now we’re tailgating in front of historic Lambeau Field as I attempt to eat my body weight in beer-soaked brats and cheese curds. The Packer faithful are steadily rolling toward the stadium fully decked out in team colors, the jerseys on their backs a veritable roll call of Green Bay all-time greats. Nitschke, White, Favre, Green, Driver, Starr. But there’s one jersey name that more people are wearing than any other, and the tally is not even close: Rodgers. 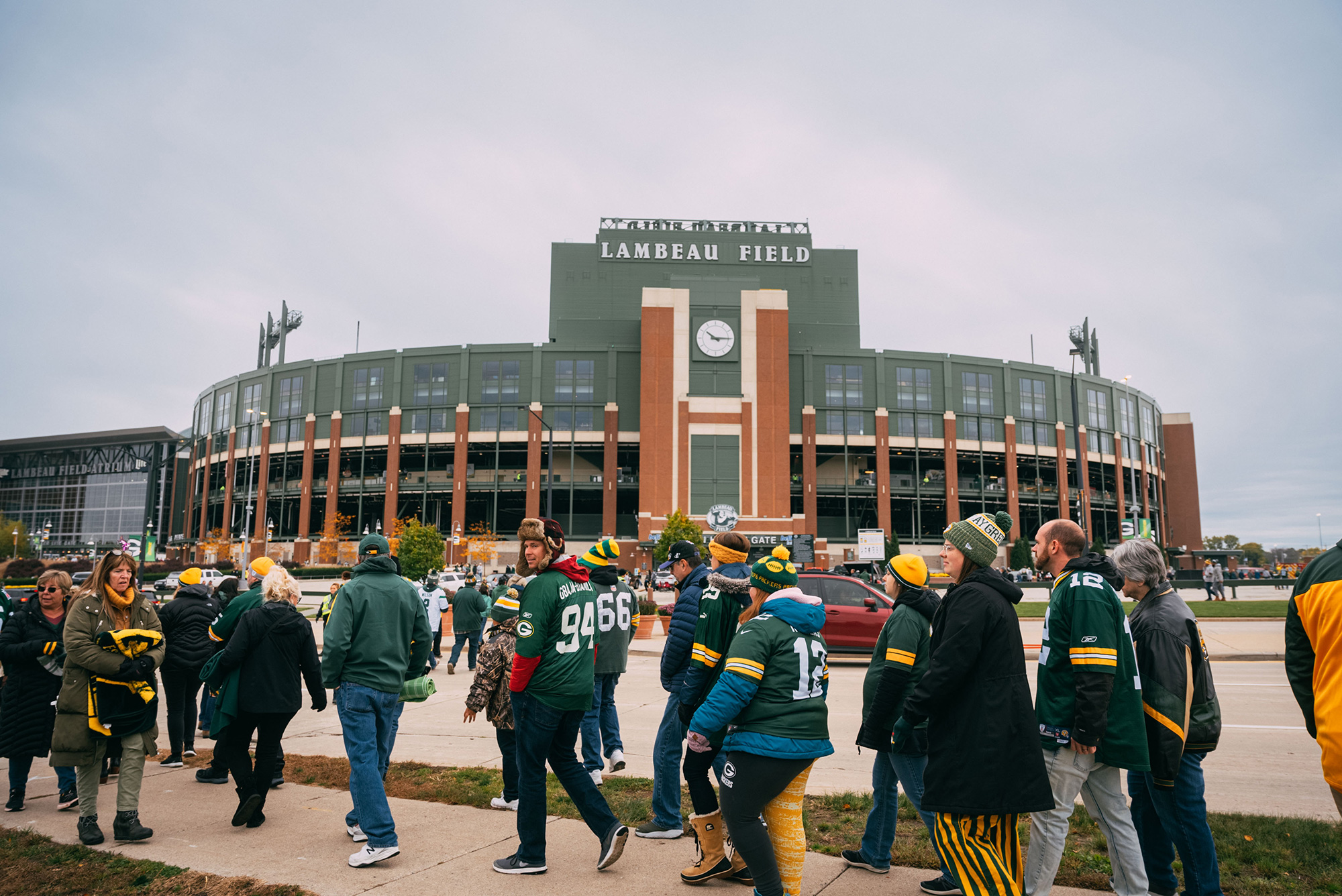 Name a football accolade, and chances are that Aaron Rodgers has already checked it off the list: Super Bowl champion, Super Bowl MVP, four-time league MVP (and current reigning back-to-back MVP), all-time Packers leader in career touchdowns, highest NFL all-time QB rating. You get the idea. Yet for all of Rodgers’ remarkable accomplishments, there was something else that caught the attention of Zenith CEO Julien Tornare when considering a potential partnership together. “When we do something with an ambassador, I look much more at the personality and the journey than the achievement itself,” Tornare explained to me during one of our chats in Green Bay. “With Aaron, I told him, you are already a champion and a superstar. Tell me more about the journey.” So, Tornare invited Rodgers to Zenith’s manufacture in Le Locle to get to know the quarterback better. “You know, [Rodgers] was very honest and open about his more difficult moments,” said Tornare. “Life is not always about great things, and Aaron told me about his ups and downs, injuries, and competition in a very open and very humble way. Zenith is an authentic and low-key brand; we’re not about showing off, and Aaron has that same spirit.” 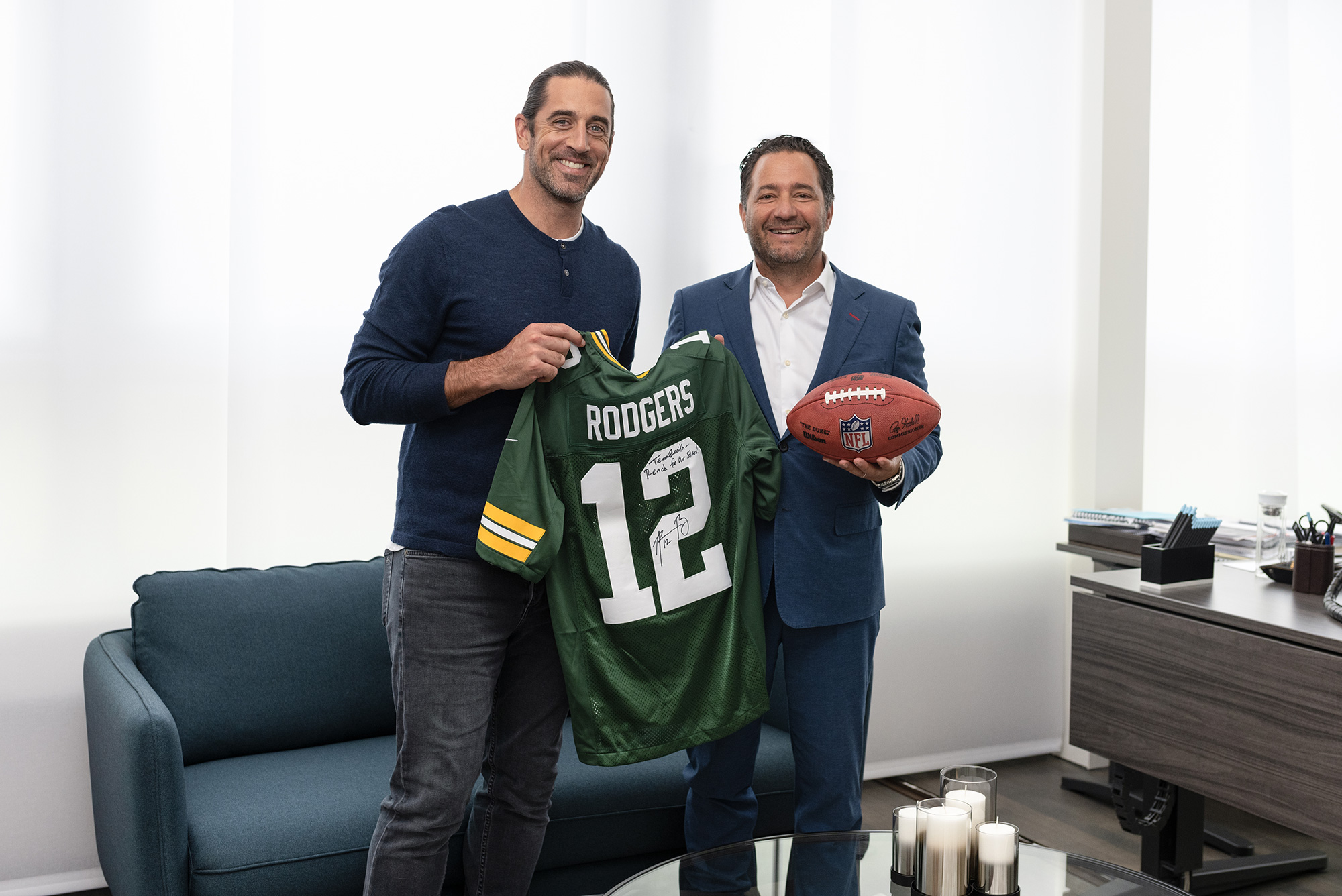 What further impressed Tornare was Rodgers’ down-to-earth interactions with the rest of the Zenith team and his genuine enthusiasm for the actual watchmaking process. “I was quite amazed when Aaron came to the manufacture,” Tornare said. “He was so accessible and friendly, and it confirmed for me that, in terms of fit, he’s the right personality. When he was in the workshop, he was talking to the watchmakers, and asking questions. He loved it, and showed huge interest.”

Horology and football certainly make for strange bedfellows, at first glance. But if I asked you to name a person whose profession revolves entirely around precision and attention to the most minute details, and where success is dependent on so many different individual components that need to come together to operate as one, both quarterback and watchmaker would be completely acceptable answers. 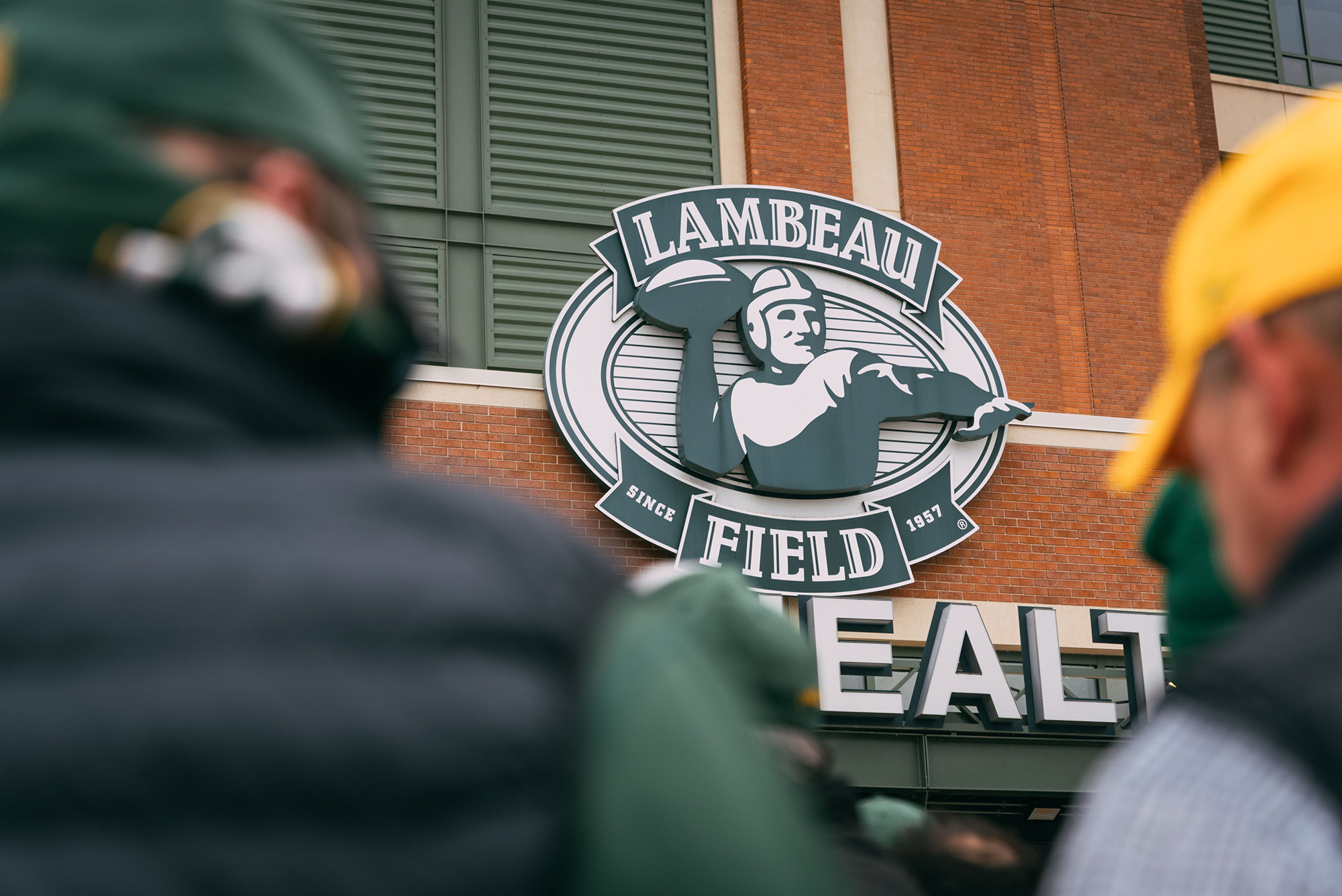 An announcement comes on over the PA system at Lambeau: it’s another home sellout crowd today, the latest in a streak that goes back 63 years. It’s a wildly impressive statistic when you compare the roughly 81,000-seat capacity of Lambeau Field to the population of the city it’s located in, which is just around 107,000 people. Green Bay proudly holds the title of the smallest city in North America to have a professional sports team, but despite its small-town roots, the Packers’ football history is as deep as the green on their uniforms — it’s no coincidence that the Super Bowl trophy is named after famed Packers coach Vince Lombardi. 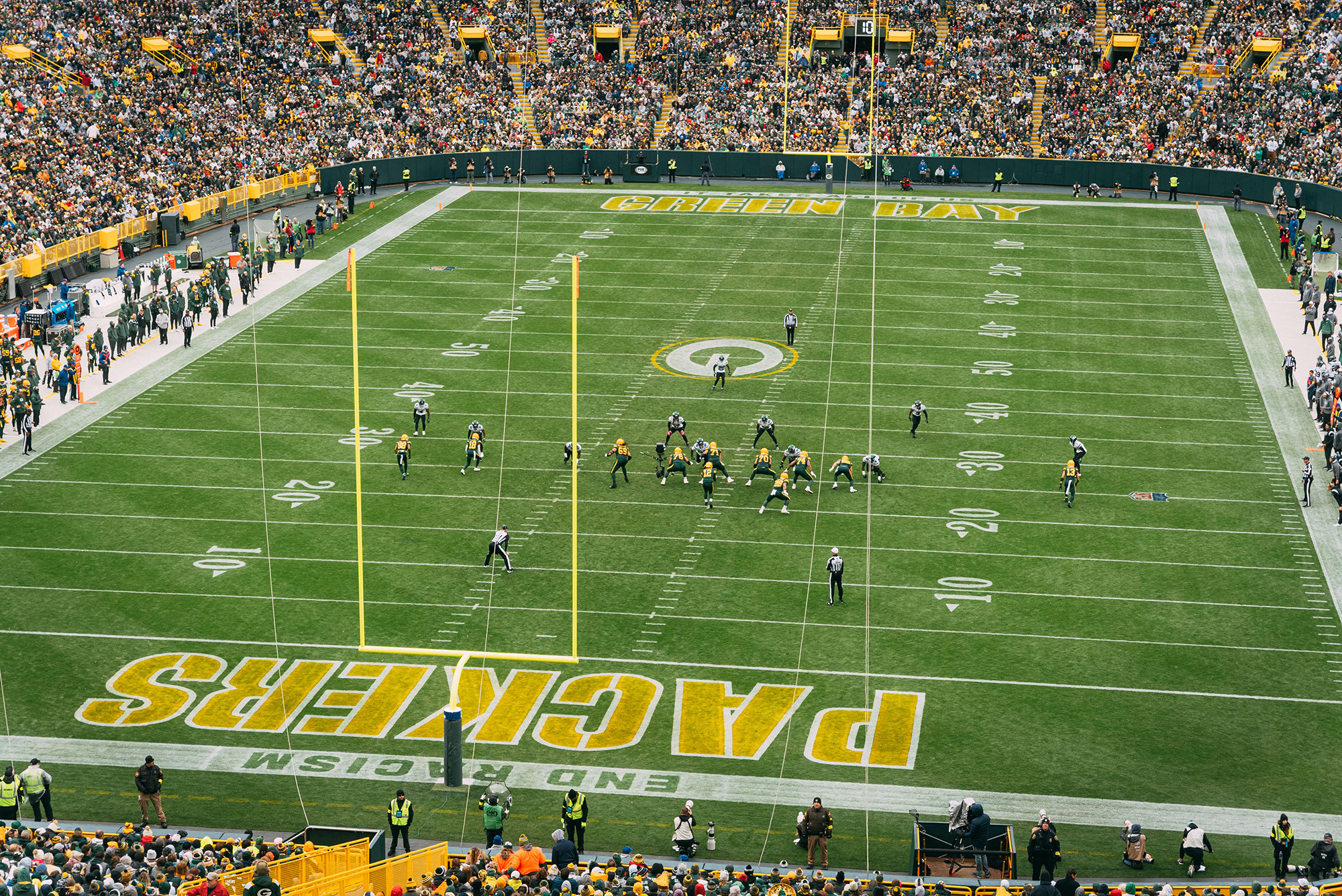 A slow, insistent rain starts to fall, and the only discernible movement in the crowd is a collective wave of ponchos being donned. The Packer faithful are undeterred; they’ve seen far worse weather than this. Many a bitter Wisconsin winter has been the proving ground for their six-decades-long home sellout streak, so what’s a little rain? The scoreboard, however, paints a bleaker picture. The game’s been close through three quarters, but by the start of the fourth, the Packers’ chances of victory are rapidly slipping away. As it turns out, a win’s not in the cards today. The disappointment in the stadium is palpable, and the cheesehead hats hang a little lower as we make our way out of Lambeau. 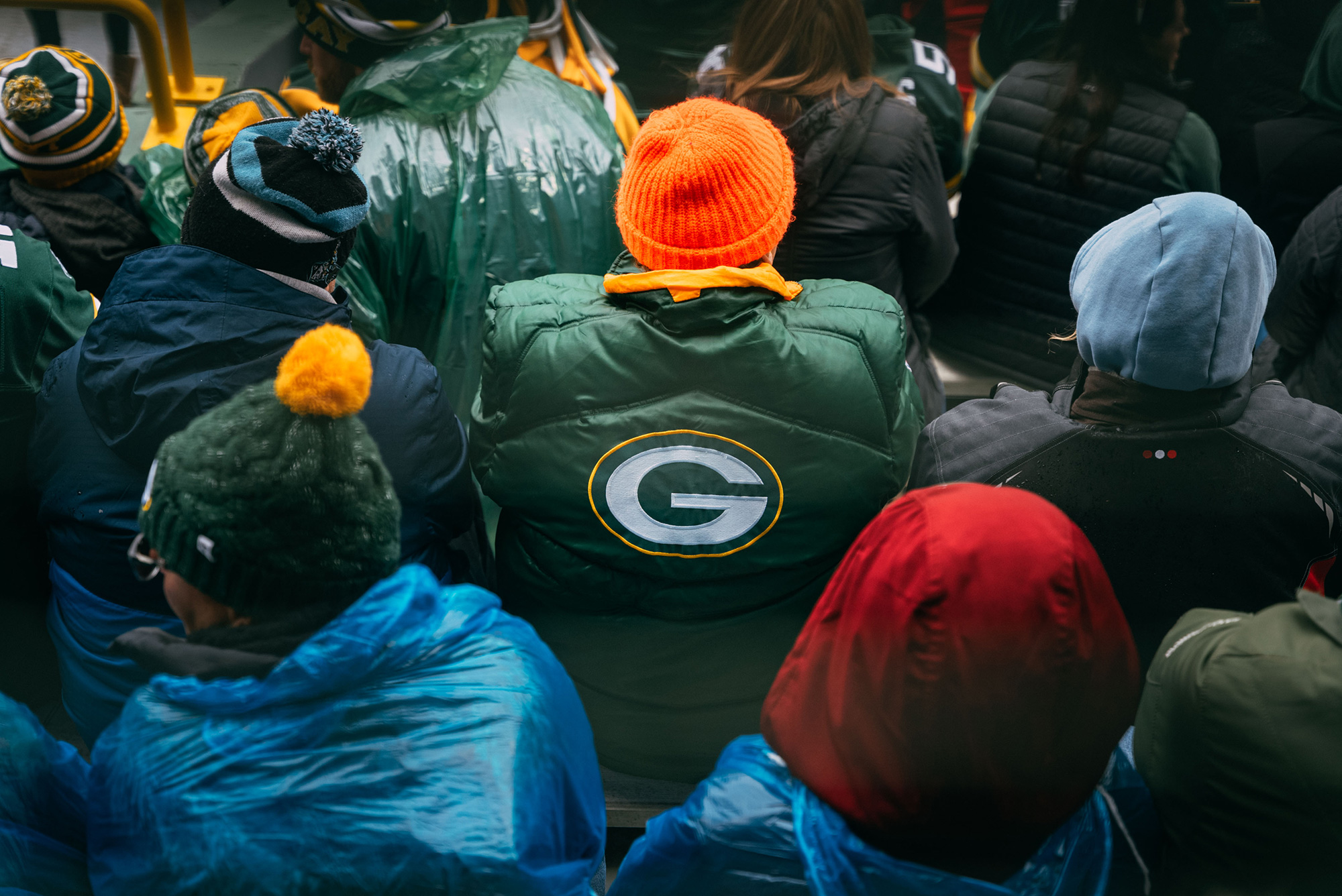 The rain clouds linger in Green Bay the following day; they seem intent on reminding the city of the Packers’ loss. I’m scheduled to interview Rodgers in an hour, though he’s running slightly behind. I wonder what kind of mood he’ll be in after a loss, but when he arrives, he’s the portrait of equanimity. Turns out even Super Bowl champions lose a game every now and then. After a quick greeting, he apologizes for the delay. “Contrary to my tardiness, I do actually care about timing,” Rodgers quips. On his wrist is the Zenith Chronomaster Sport, the watch that he’s worn for the entirety of his partnership with the brand. Rodgers has the black-dial reference on today, though I’m more partial to the white-dial version with matching stainless steel bracelet he’s most often seen wearing. With a case diameter of 41mm and a lug-to-lug measurement of only 47mm, thanks to its tapered lugs, the Chronomaster Sport is a suitably sized sports watch for most wrists. The collection comes in a number of stainless steel and two-tone rose gold variations, but all share the same heartbeat: the newly-improved El Primero 3600 movement, which ticks away at 5Hz (36,000 beats per hour) and offers chronograph timing precision to 1/10th of a second.

Rodgers has spent the entirety of his 18-year career with the Green Bay Packers (not surprisingly, this is yet another NFL record in terms of quarterback longevity with a single team). It does seem only natural, then, for a quarterback who is so singularly connected with one organization to be the ambassador for a brand whose identity is so intertwined with a specific watch movement. It’s clear that Rodgers has a genuine affection for Zenith, particularly the story of the El Primero and how watchmaker Charles Vermot single-handedly saved that movement from obsolescence in the 1970s. “I just love the history of this company, to see the difference that one person can make, and [Vermot’s] love of watchmaking to save all of the materials he saved in order to make a watch like this,” Rodgers remarked. He continued, “To see the employees in the company today who are so passionate, who have been there for 30, 40 years — they are the walking history books of the company. They’ve lived and breathed it for so long, it’s in their DNA. It’s like going to Lambeau Field and doing a tour with a guide who has been there for decades. They just ooze a love of the Packers, and you can’t help but be inspired by their passion.” 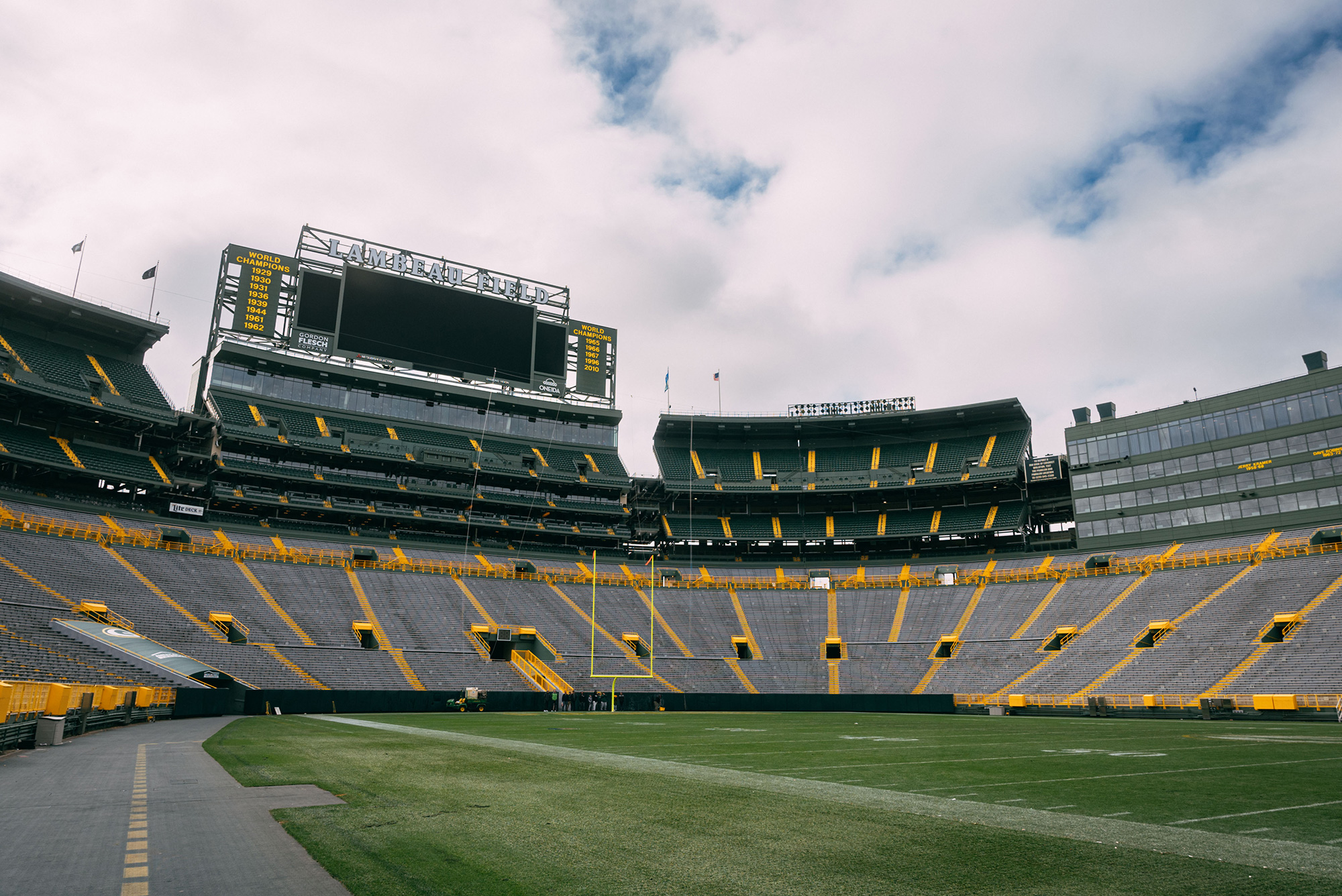 It’s hard not to notice the introspection with which Rodgers speaks. Given the results of yesterday’s game, I ask him about how he keeps his mindset in a productive space when it comes to losses, and how he bounces back from such setbacks. Rodgers pauses thoughtfully before responding. “I think you have to be very critical of yourself in wins and losses, but most of the time, there are a lot more lessons to be learned in failure. Having a good relationship with the fear of failure I think is very important to succeeding, because fear of failure is a force that can be crippling to people who maybe have a misconception of what failure actually is.” So, what is failure to Rodgers? “It’s not a number on a scoreboard,” he says. “There are going to be games like yesterday where you prepare and play as hard as you can, and it’s not good enough. That’s not failure to me. That’s an ‘L’ on the scoreboard, but success is not a number on a scoreboard either. It’s a feeling of devotion and passion to your craft, a mastery that can’t be measured by a specific number. I think a lot of times we get that misconstrued in our society and culture, and we put too much status into wins and losses, but I don’t think that is a barometer that encapsulates those two terms.” For a player so associated with achievements and superlatives, it’s interesting to hear him speak with such ease about failure. But there’s another level to that idea as well, one that has a direct correlation to his role as a Zenith brand ambassador. Rodgers explains, “When I was a kid, I used to watch interviews of my favorite players, and I was always fascinated by how they handled the wins and the losses and the class they would show in both victory and defeat. So, I’m always very critical of myself in my interviews and how I carry myself. It means a lot to me to represent the organization and the brands that I’m associated with in the right way. I always say to our team, the ‘G’ that’s on our helmets and jerseys doesn’t just stay there; we carry that letter with us when we’re out and about. We’re representing the organization everywhere we go, which is not at all dissimilar to wearing my watch and representing Zenith.” 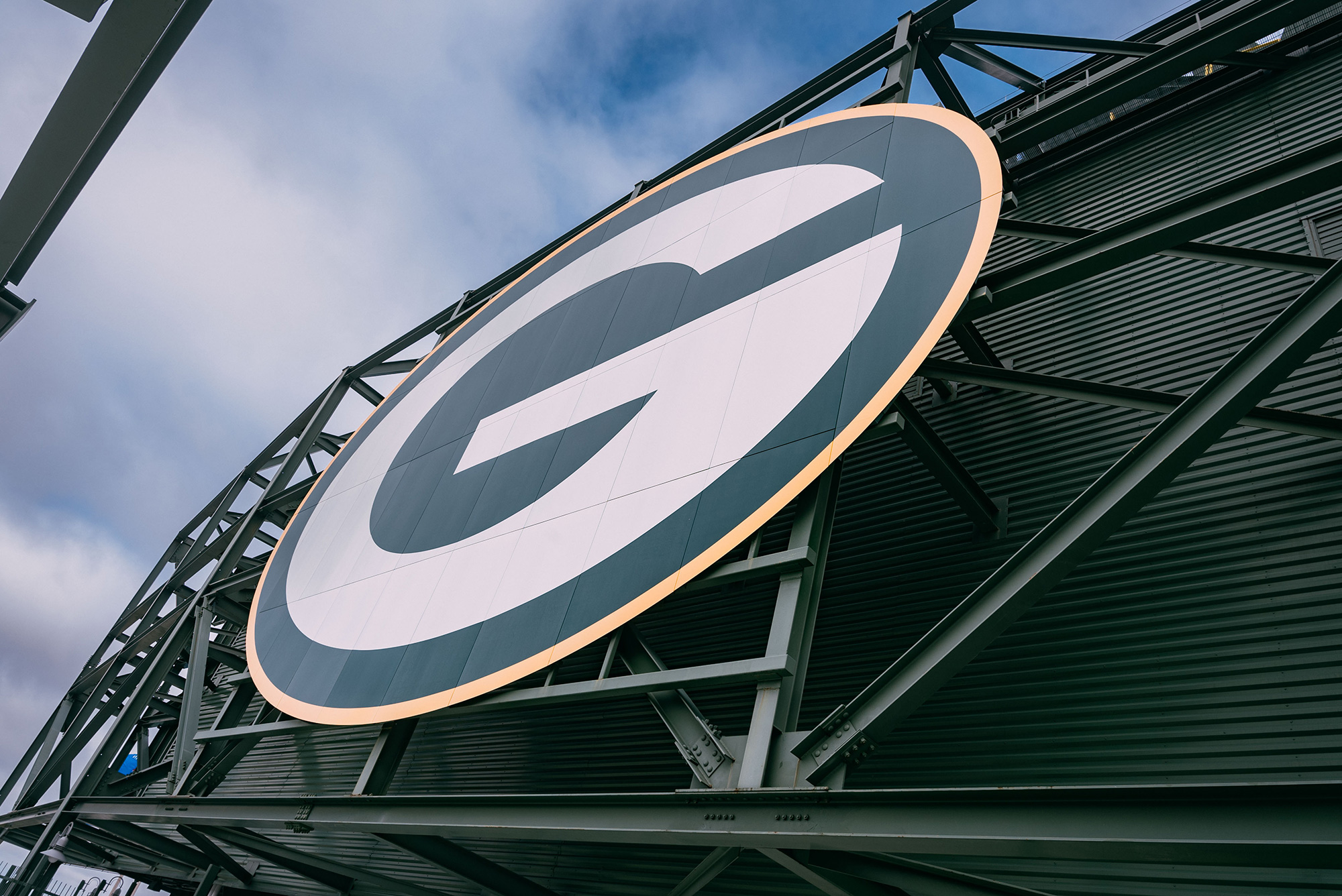 I ask Rodgers what he envisions for the next stage of his life, post-football, and without hesitation, he answers, “Adventure. Life is one big adventure, one ceremony after another, and I look forward to many of those adventures and ceremonies in the future.” As to what the timeframe of that future looks like, Rodgers offers his broader philosophy of timing in both football and life. “Timing has a lot of different meanings,” Rodgers explains. “Obviously, the offense I grew up in, the West Coast offense, is predicated on timing — everything is about timing and rhythm and balance. But timing on a broader scale is fascinating to me, because if you trust the universal signs and synchronicities, then divine timing is always going to work out as it should. It’s very difficult to trust that at times because I think we all want to control our destiny and our fate and have things happen exactly when we want them to happen. But the majority of the time, when we look back at our life, we can see that either things weren’t aligned, or divine timing wasn’t right in those moments.”

Such uncertainty is a difficult thing to master. I sometimes think watches are a salve for that anxiety, the steady tick-tick-tick a reassuring rhythm to ground us in the present moment. How the next NFL season will unfold for Rodgers is unknown, but he speaks about his future with the air of a man who is at peace with whatever’s next. “This game was around long before I got in, and it’s going to keep going long after I’m done,” Rodgers says. “But while we’re in it, we try to do the best we can to make a positive impact and leave it better than we found it. But the game doesn’t wait for anybody. At some point, the ride’s gonna be over, and I look forward to the next chapter.” I know Rodgers is talking about football right now, but I catch his deeper meaning. Time, as they say, is undefeated. But for Rodgers, whatever the next adventure is, it will be exactly what it needs to be. 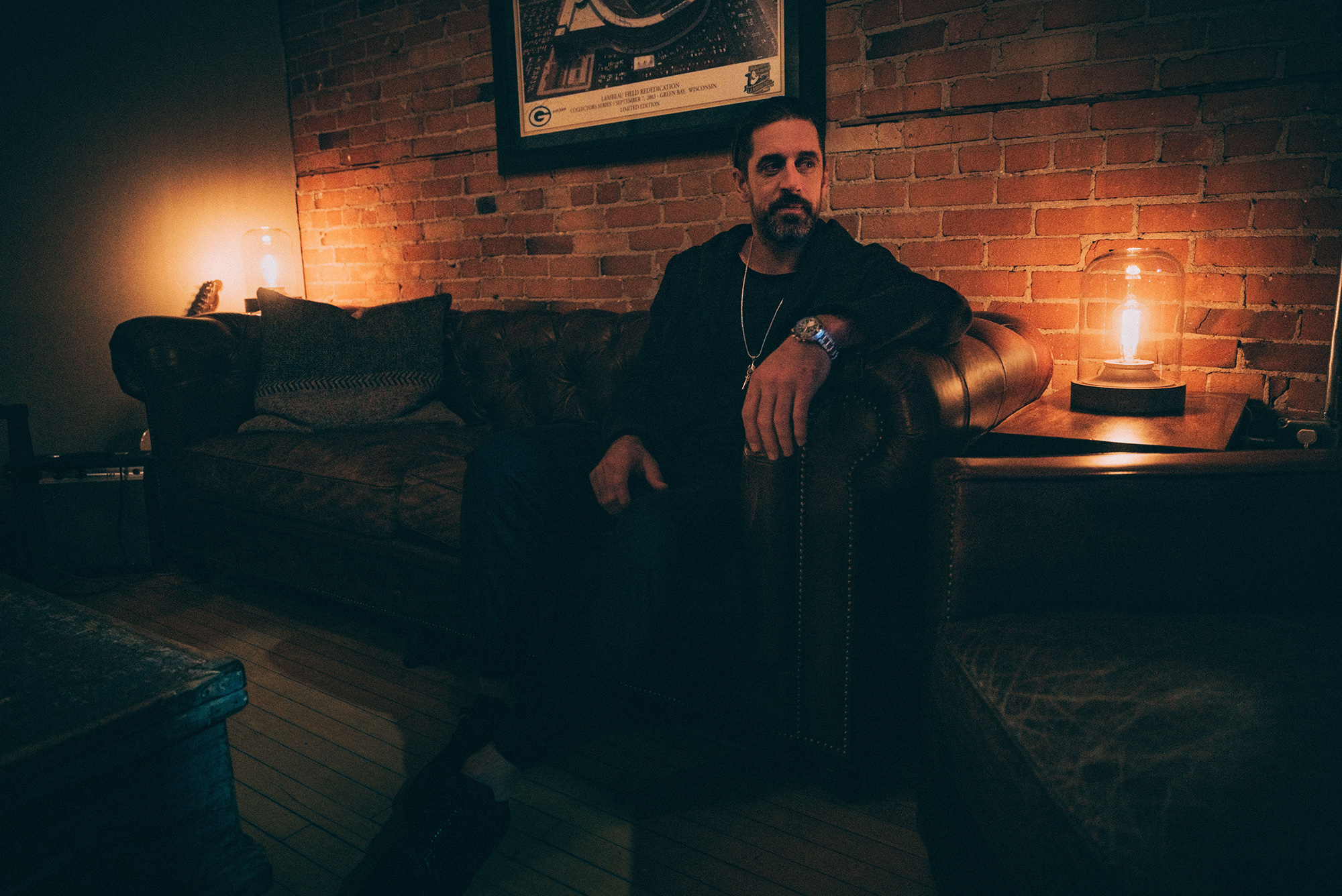