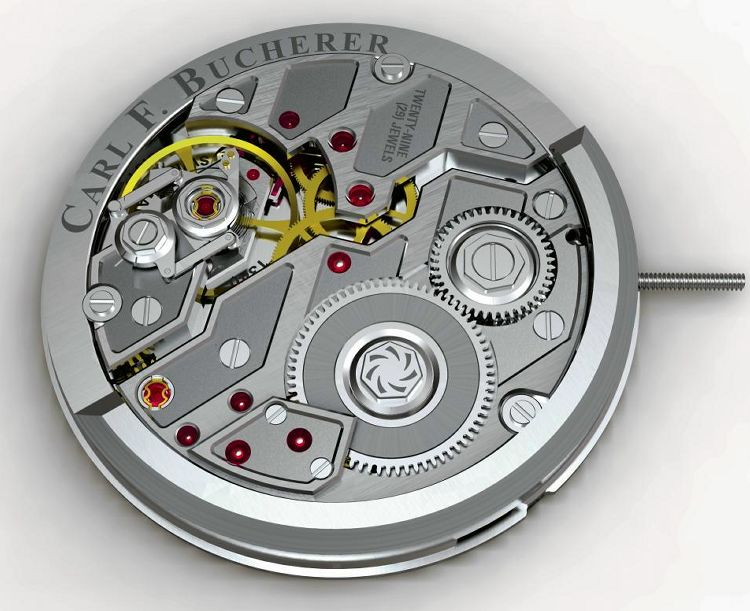 Don’t worry that there is no watch to go with this movement yet. The caliber CFB A1000 is a really nice little machine on it’s own. A few months ago I got a chance to mess around with it in person. The first thing you notice about it, is that it looks very little like most mechanical movements that you have seen. There is a distinctive ‘circuit board’ look to it, that commands a more modern perspective than the classic nature of most mechanical movements. This really represents taking the tried and true idea of mechanical movements and using extremely sophisticated computer design means of producing and improving upon very old principles.

When I mentioned to the Carl F. Bucherer reps that this was a very technical looking design, they agreed that it was the approach they were taking. Juxtaposing elegant curves, for strong angles. Best of all, it is a movement that is meant to exist in a watch that is only very expensive, rather than astronomically expensive. From a fit and finish standpoint, it is really top notch. How did I play with a movement outside of a watch? Good question. Watch makers place them in little plastic or metal housings that simulate a watch case housing, without any of the watch parts. 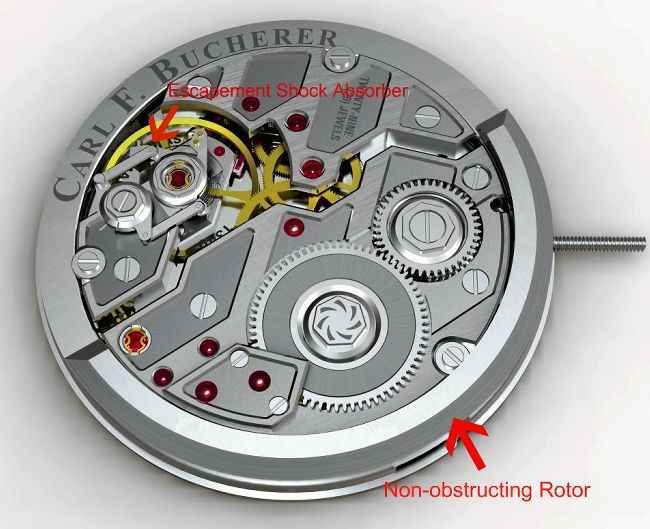 Carl F. Bucherer worked with Techniques Horlogères Appliquées (THA) based in Sainte-Croix to develop the movement. Inside are 29 Jewels with a 55 hour power reserve, with 30mm wide by 4.8mm high dimensions. While the movement looks very modern, most of the components are pretty standard high grade quality, so nothing worth mentioning that is special in that department. I am a bit disappointed that the movement only beats at 21,600 bph, which is relatively low as most high-end movements beat at 28,000 bph. This might have to do with the new shock absorption system.

The CFB A1000 does have two very cool innovations though. They are a special escapement shock absorption system, and a rotor for the automatic winding system that does not obstruct the view of the movement. The shock absorbing system is pretty cool. Two spring loaded arms hold the escapement in place. If the movement, and thus escapement experience a shock, the harsh movements will be absorbed through the arms, thus helping to protect the delicate escapement.

One of the major reasons that manually wound movements still exist, is that watch lovers enjoy viewing the movement operating. The necessary weighted rotor in the (more practical) automatic movement really gets in the way of a detailed full view of the movement in operation. This is one of the reasons watch makers in the past have utilized the ‘mini rotor.’ The Carl F. Bucherer CFB A1000 takes a different approach. The entire rotor is placed on the periphery of the movement, with the winding gear placed closer to the edge of the movement. The rotor takes the form of a ring instead of a half circle, and is heavily weighed on one end to facilitate oscillation (likely weighted with brass).

This special ring rotor, in addition to looking great, provides the best of both worlds, allowing for a great unobstructed view of the movement, along with having the immense convenience of an automatic winding movement. Nice work Carl. F. Bucherer. Oh, and by the way, remember how I said that worked with Techniques Horlogères Appliquées to development the movement? Apparently Carl F. Bucherer was so impressed with them, they just bought up the 17 person company. Look for the CFB A1000 automatic movement to appear in Carl F. Bucherer watches soon.