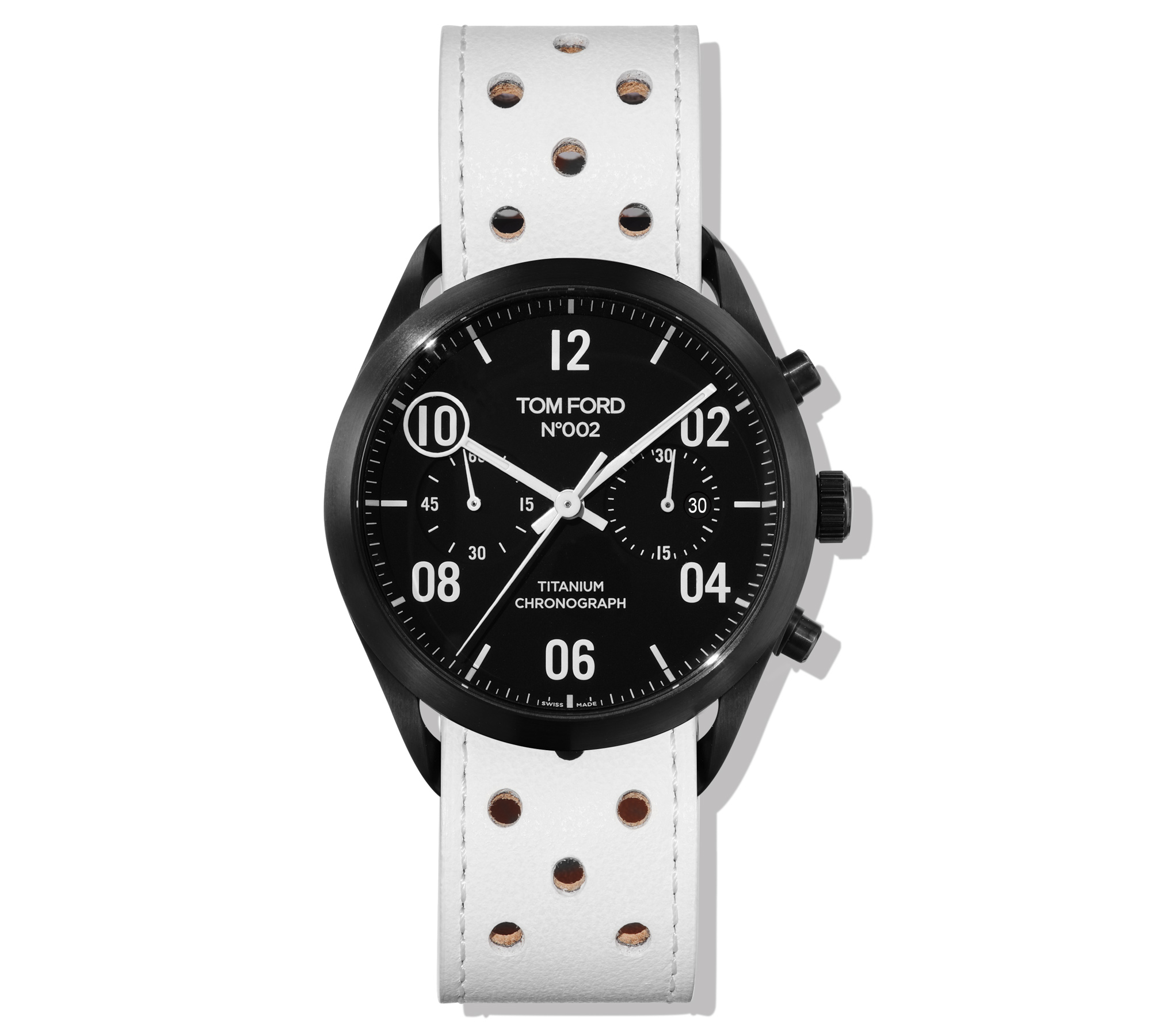 Within the greater world of fashion, Tom Ford is a major presence, and in addition to producing everything from clothes to cosmetics, the New York-based design brand also sells watches. Personally, I’m most familiar with Tom Ford for its high-end suits like those worn by Daniel Craig in the most recent James Bond films, and while I was aware that Tom Ford also had a range of accessories, the brand’s watches are something that has only recently landed on my radar. If I am being completely honest, I originally assumed that they were just overpriced fashion watches, but after looking at their specs, it becomes clear that a good amount of care was put into their designs, and a number of them offer some truly enthusiast-driven details. A perfect example of this is the new Tom Ford TF002 Limited Edition Titanium Chronograph, which combines the brand’s distinct design language with a DLC-coated titanium case and a Swiss-made automatic chronograph movement. 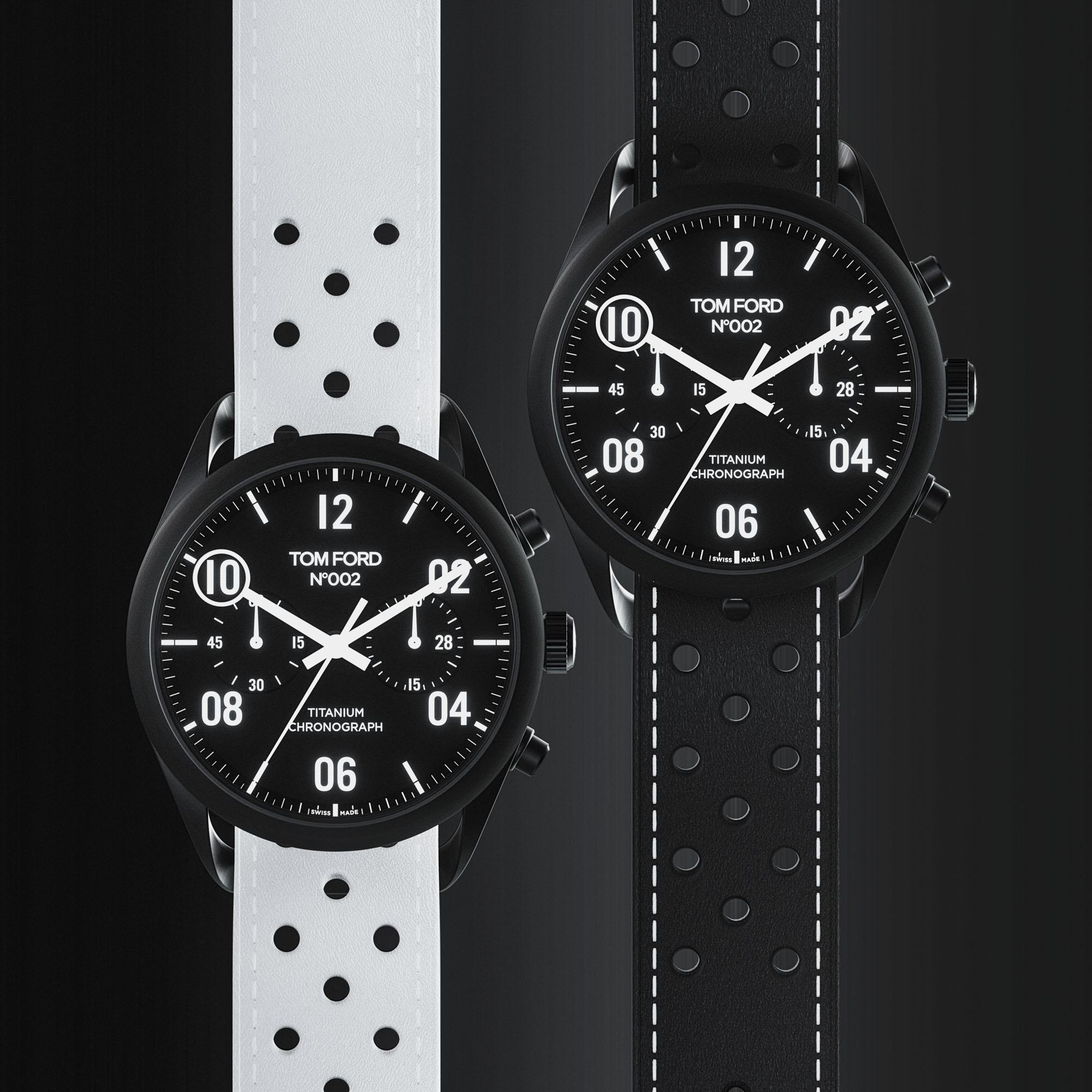 I’m a big fan of watches that have fixed bars between the lugs, and while this feature is typically only found on military-inspired timepieces and those intended for active use, this distinct design element is also found on many Tom Ford watches. Crafted from brushed titanium and measuring 43.5mm in diameter, the case of the Tom Ford TF002 Limited Edition Titanium Chronograph is given a jet black DLC coating, while the polished titanium winding crown (also given a black DLC finish) is hand-set with a black onyx insert for an added touch of refinement. Protecting the dial is a flat anti-reflective sapphire crystal, while the screw-on titanium caseback is fitted with a sapphire crystal display window that features a graphic of Tom Ford’s signature and helps provide users with 30 meters of water resistance. 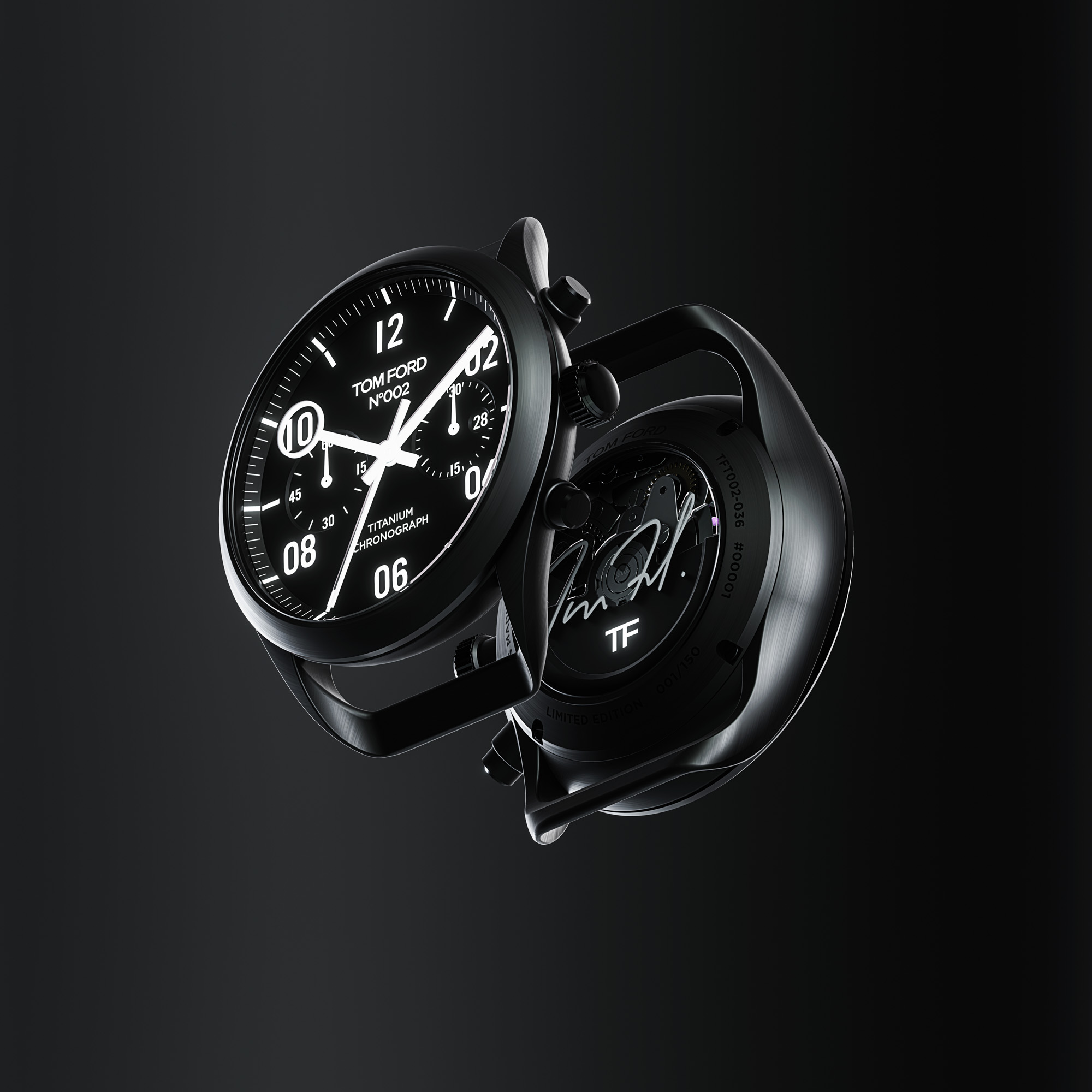 Although I’ll be the first to admit that fixed bars between the lugs significantly limit the number of straps that can be fitted to a watch, I personally love the utilitarian design ethos that they provide, and I can also appreciate how this case style creates a system with zero points of potential failure (short of the strap itself falling apart). Additionally, Tom Ford offers two different versions of the TF002 Limited Edition Titanium Chronograph, and while the watches themselves are the exact same, one is fitted with a crisp white strap, while the other receives one in jet black. Other than the color, both straps feature the same single-pass design, which is made from perforated leather to emulate the appearance of driving gloves and completed by a titanium pin buckle with a matching black DLC finish. 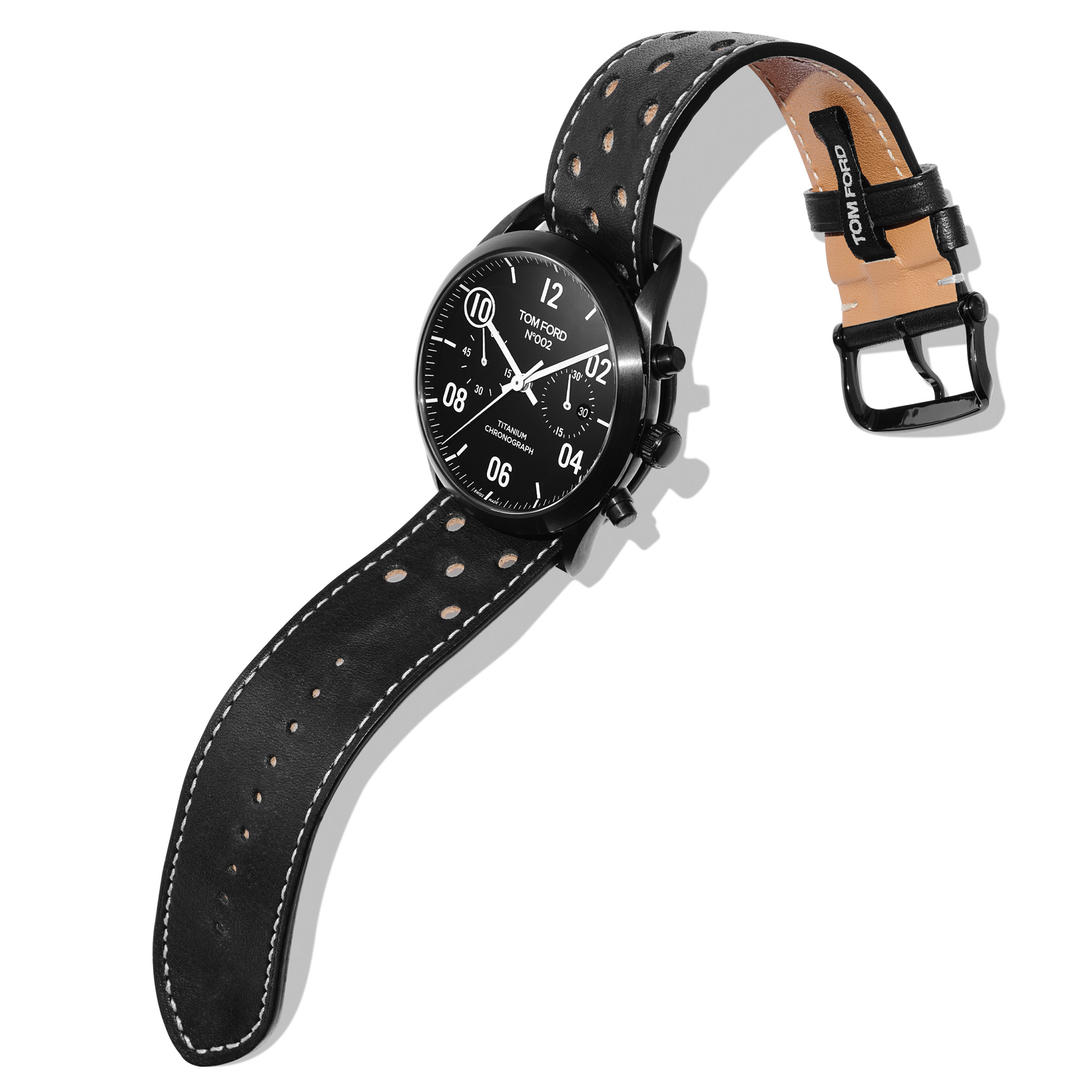 The dial of the Tom Ford TF002 Limited Edition Titanium Chronograph offers a sporty and utilitarian overall aesthetic with a black surface and all-white printing that lacks any type of applied elements whatsoever. Featuring a bi-compax layout with a 30-minute counter at the 3 o’clock location and another subsidiary register for the running seconds opposite it 9 o’clock, the dial of the TF002 is completed by large double-digit Arabic numerals at the even-numbered hour markers and simple baton markers at the odd numbers in between them. To match the dial text, all of the hands are finished bright white for maximum contrast, and while they largely follow a simple baton shape, the tip of the hour hand receives a large open circle that frames the digits of the hour markers as it makes its way around the dial. 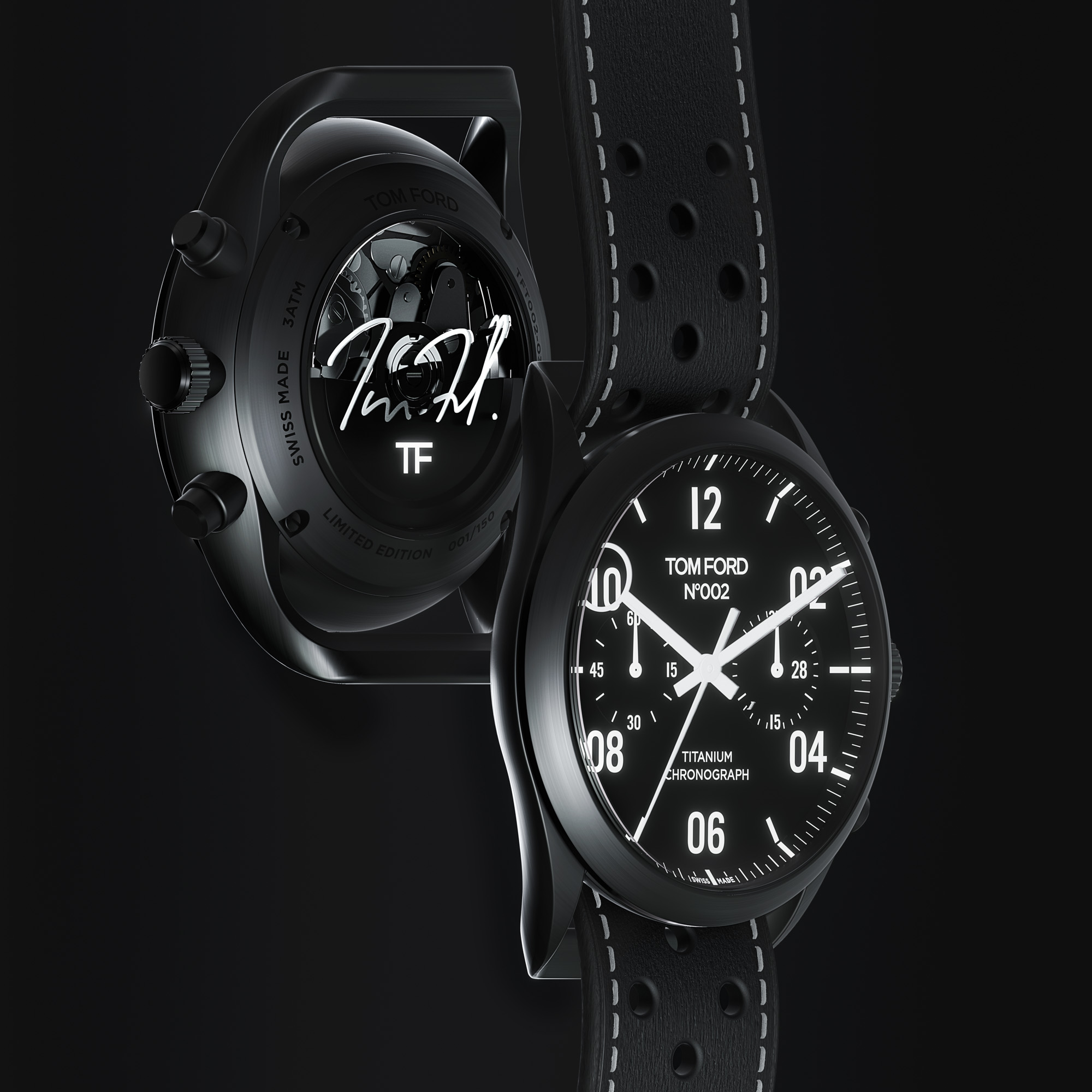 Mechanical chronographs are somewhat of a premium category of timepieces that are largely enjoyed by enthusiasts, and most fashion brands simply take the easy approach of using quartz calibers to power their chronograph models. That said, the Tom Ford TF002 Limited Edition Titanium Chronograph features a proper Swiss-made automatic caliber, and powering the watch is the Sellita SW510 self-winding movement. Given that it is largely based upon the design as the ETA 7753, the SW510 runs at a frequency of 28,800vph (4 Hz) while offering users a power reserve of approximately 68 hours. Although the Sellita SW510 isn’t exactly going to win you points with movement snobs, it is a proven and reliable design that serves as the go-to option for most mechanical chronographs that don’t use in-house movements. Repairs or service to an automatic chronograph can be expensive, and a high-quality yet ubiquitous movement such as the SW510 guarantees both an ample supply of replacement parts and reasonable service costs down the road, without needing to send your watch back to the manufacturer in order to have the work performed. 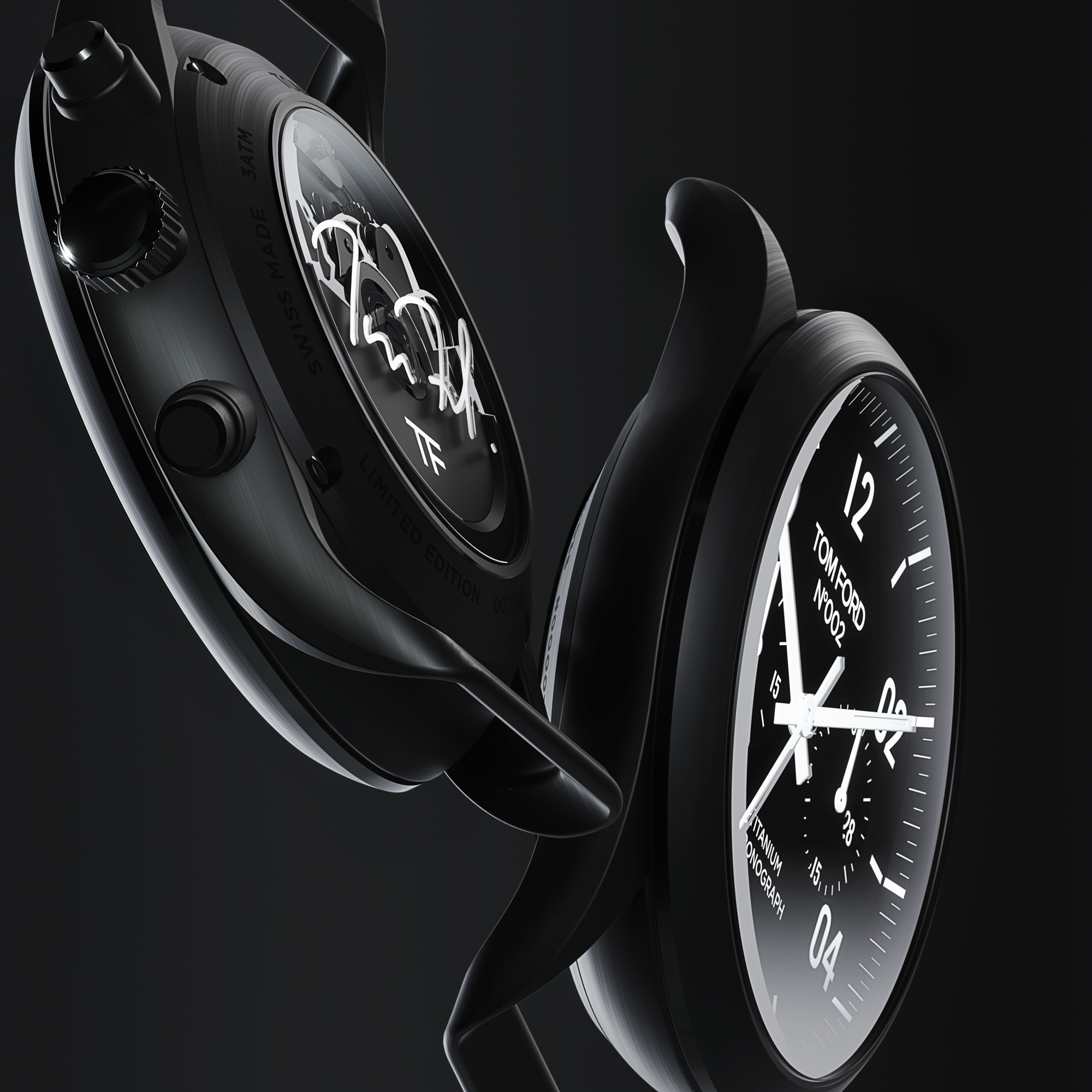 Due to the mechanical complexity of their movements, there exists somewhat of a price floor when it comes to automatic chronograph watches. Even the most affordable options with Swiss-made calibers will set you back nearly $2k, and it is not uncommon to see watches with similar specs selling for well over the $5k price point. That said, the Tom Ford TF002 Limited Edition Titanium Chronograph has an official retail price of $2,995 USD, and this seems surprisingly realistic, especially considering that it is produced by a well-known fashion brand that routinely sells suits that cost nearly twice this much. As its name suggests, the TF002 Limited-Edition Titanium Chronograph is not a standard addition to the collection, and it will be produced as a limited series with 150 examples of each strap color available. Watches from big-name fashion brands often don’t hit the mark for enthusiasts due to the fact that they are intended to appeal to a much larger target audience, but with a titanium case, fixed bars between the lugs, and a self-winding mechanical chronograph movement, I’d imagine that there are quite a few die-hard watch enthusiasts out there who wouldn’t mind adding this particular model to their personal collections. For more information, please visit the brand’s website.