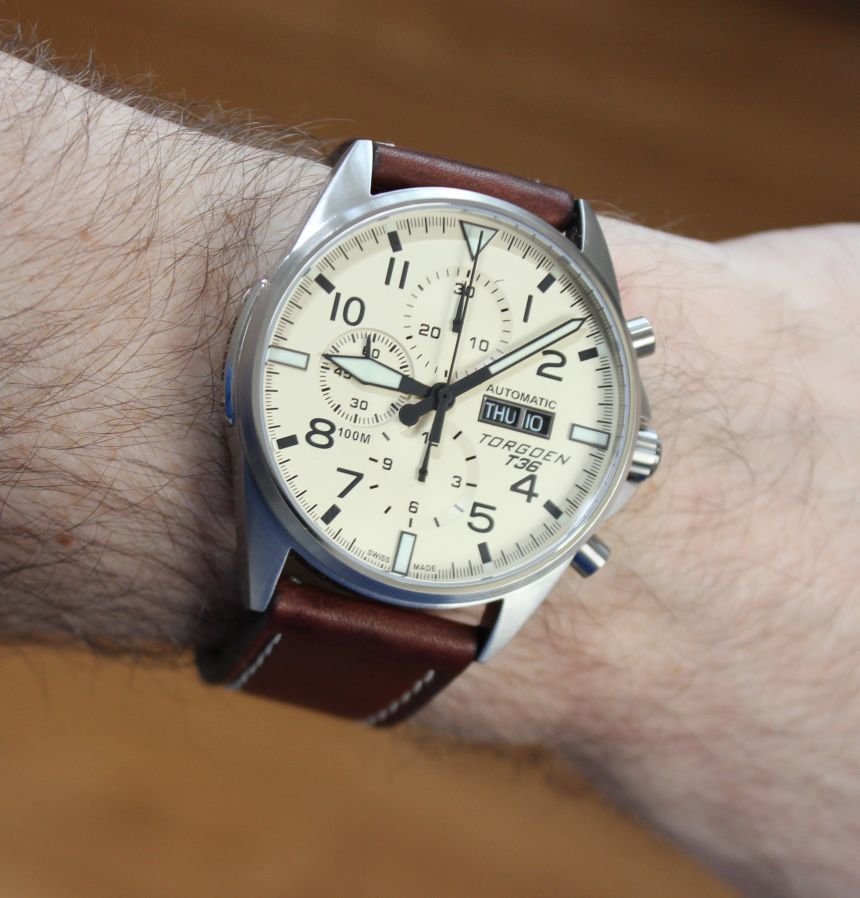 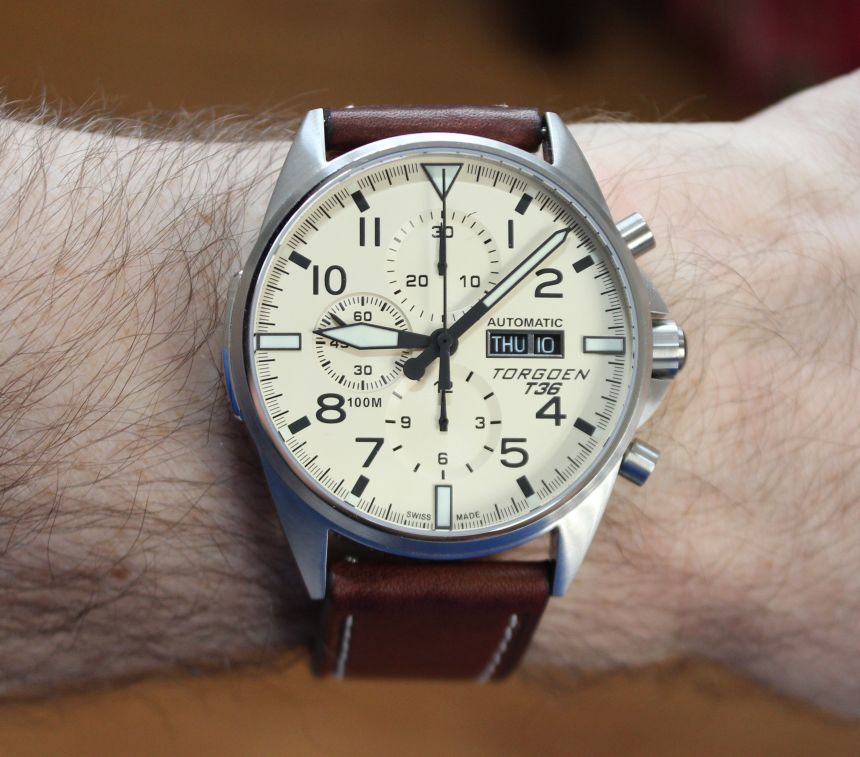 When it comes to watches from Torgoen, two words come to mind: “aviation” and “affordable.” That, to me, has been the essence of the brand. They have been creating competent, Swiss-made aviation-inspired watches at some rather nice price points. So, then, it was a bit of a surprise when I learned that they were jumping into more of a luxury segment with their latest release, but I decided to give it a closer a look anyway; enter the Torgoen T36303 Limited Edition. 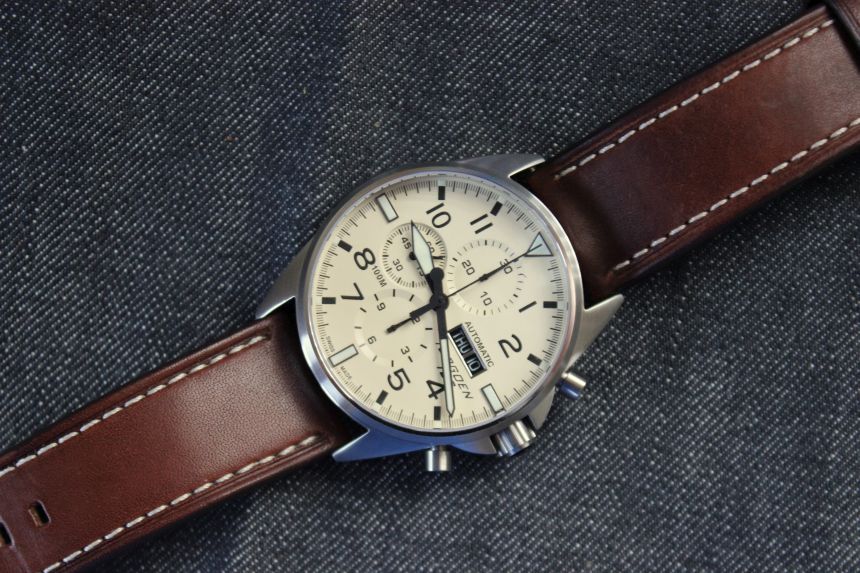 The Torgoen T36 Chronograph (ref. T36303) is a limited edition, aviation-inspired piece, taking some of its styling from cockpit instrumentation. The large part of the design is informed by the movement tucked away into the 44mm steel case, with that movement being the well-known Valjoux 7750. This sets the tri-compax layout of the dial, as you would expect. This is a movement that we certainly are no stranger to – so how do you mix up the look that it dictates? On the dial, this is done by slightly recessing the subdials. Along with giving things some dimensionality, it also changes the shading a bit, which cleverly allows the registers to be slightly delineated from the main dial without requiring the use of another color for the border, or the register itself. 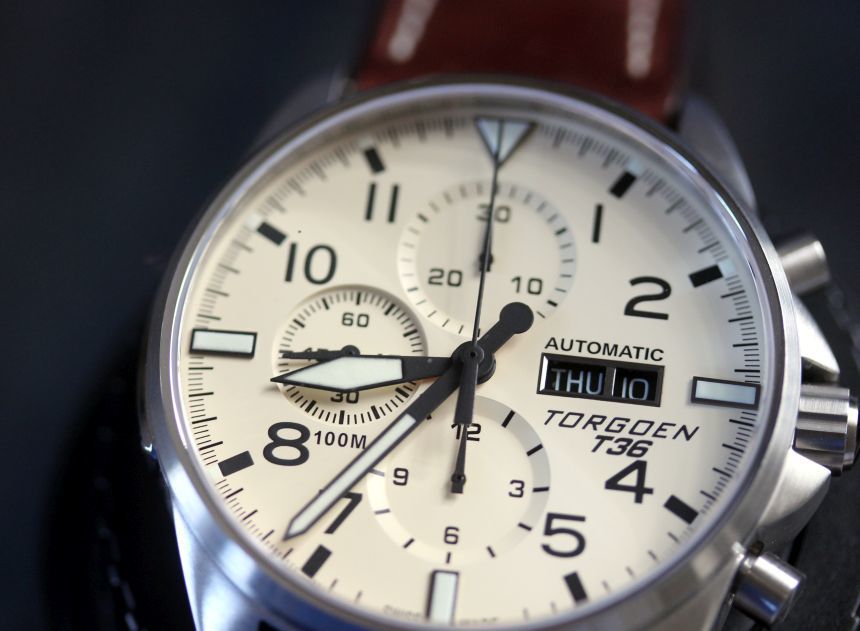 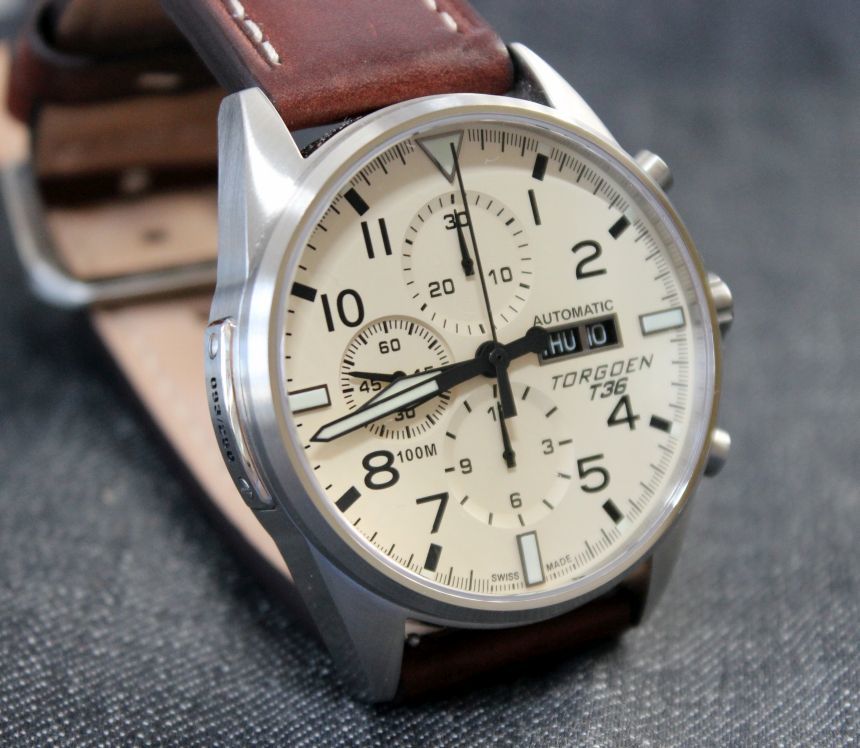 Overall, the look given by the dial of the Torgoen T36303 Limited Edition is what I would call “new vintage.” The cream-colored dial evokes a white dial that has picked up some age, and the fairly soft leather strap seems to be going for the bomber jacket leather feel (though not the look). This is a subtle thing, as you certainly would not look at the watch and call it a vintage, or vintage-inspired piece. It has some of those hints, which are then offset by the crisp printing of the numerals (do note how balanced the designers kept things in terms of what numerals were included or excluded), large applied indices at the compass points, and the large, legible handset. The legibility of those hands is of course due to the fact that, while being wide and lume-filled, they are outlined in black, so they stand out against the dial. 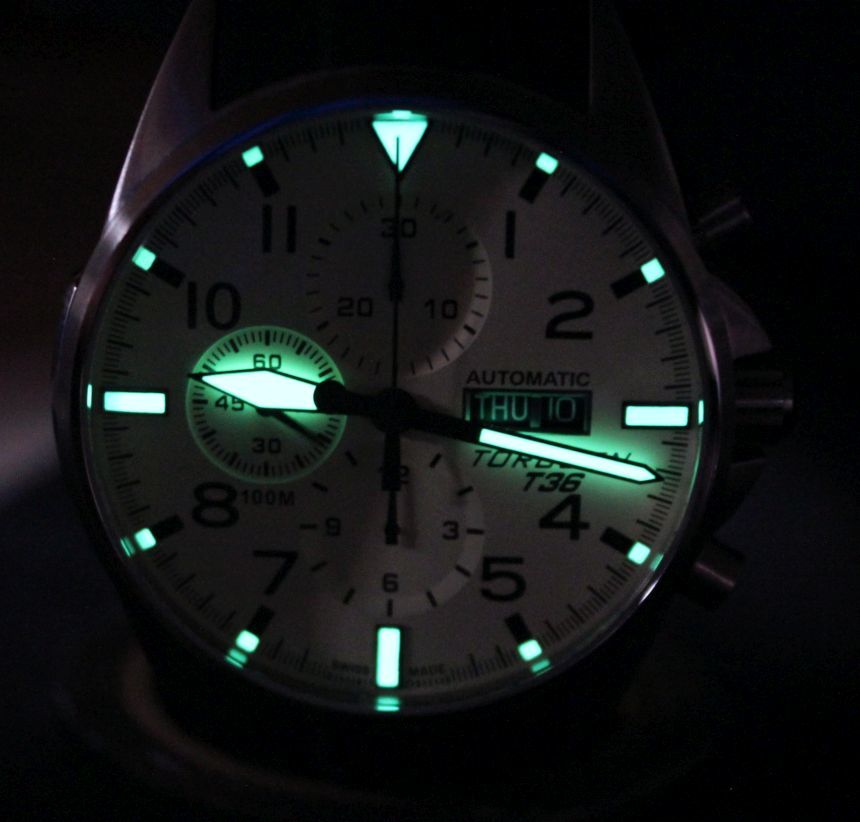 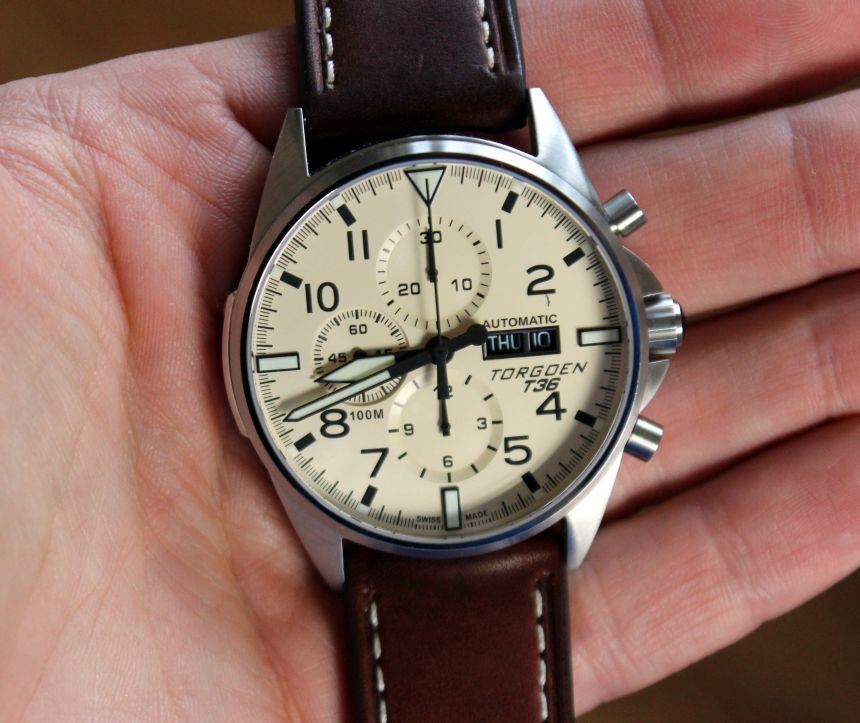 When you take a step back and think about the colors of the Torgoen T36303 Limited Edition, it really is a bit of a monochromatic effect, cream and black, with some pops of white from the luminant. This even carries onto the day and date displays, which are, interestingly enough, using black wheels with white printing. We so often see white wheels used on dark dials, it is almost a shock to see the usage reversed. It works well here, in my opinion. What does not work quite as well for me is also by the day and date – and that is the text on the dial. Above the date, you have the word “Automatic,” and below, you have “Torgoen T36.” Add in the “100M” text over at 8 o’clock, and you get a rather cramped feel, especially given the layout necessities of the chronograph. If it were me, I would drop all of the text except for the brand name, as all of that information is visible on the reverse side of the watch, and let the resulting cleaner dial speak for itself. 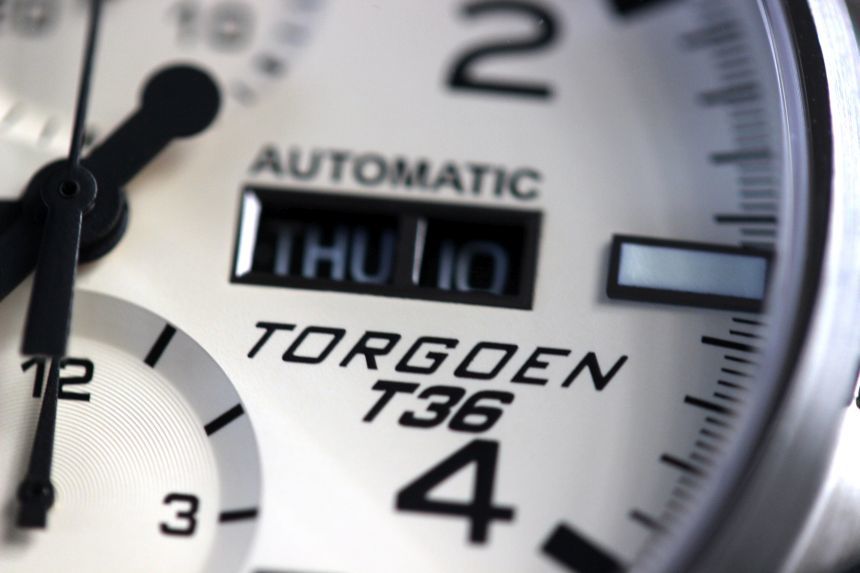 Through the mineral crystal on the reverse of the Torgoen T36303 Limited Edition (the front crystal is sapphire) you can see the signed rotor, which does cover a good portion of the movement. Given that we have the Valjoux 7750 inside, it should not be a surprise that this is a fairly thick watch, measuring in at 16mm. As you might expect, this 32g watch is one that you feel on your wrist, and can be a bit tricky to slip under a shirt cuff at times. If it is not a problem with your cuffs, however, this is an eminently capable daily-wear sort of a watch, either on the brown leather strap or the black PU strap that is also included. In terms of the overall design, there is no doubt that this is an aviation chrono, but it also is not one that is going to showcase much differently in terms of design cues. 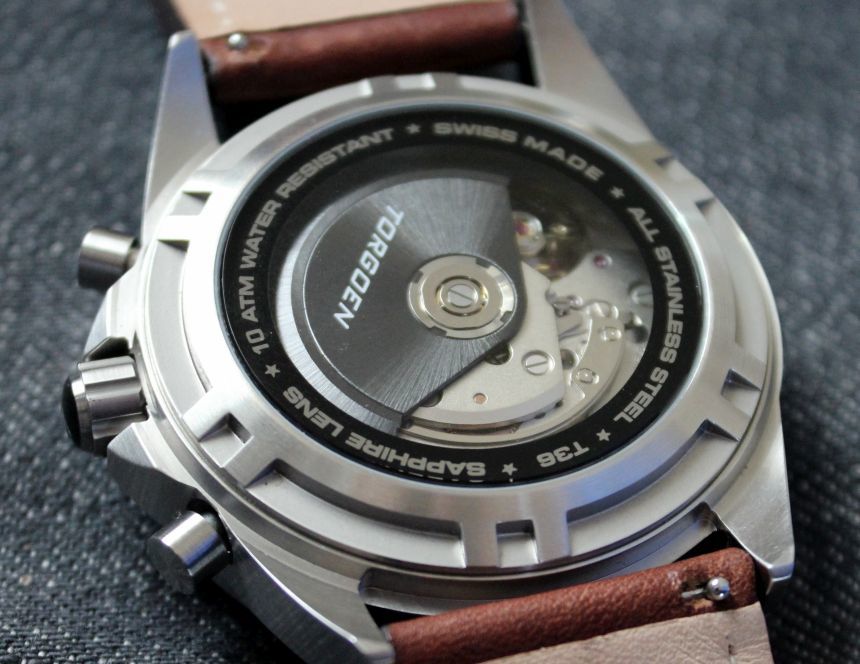 Sure, you have the numbering plate on the left side of the case, and a domed, signed crown, but the crown guards and pushers look to be fairly standard stuff. Then again, that may just be the route the brand is going with the Torgoen T36303 Limited Edition. As I mentioned at the outset, this is their first big foray into the luxury realm, and as such, it probably makes sense to stick to a more tried-and-true sort of design (as well as movement). Testing the waters, so to speak, and react to what the customer base thinks. For me, well, I am not much for chronographs. This is a perfectly capable watch (and has a great movement driving it), there just was not a whole lot that that really drew me in. Yes, you can get into some of the details (that are well done) to differentiate things, but for those that are not truly into chronographs, I do not know if those details will stand out enough. Then again, I am more than certain that you, dear reader, will let us know below. 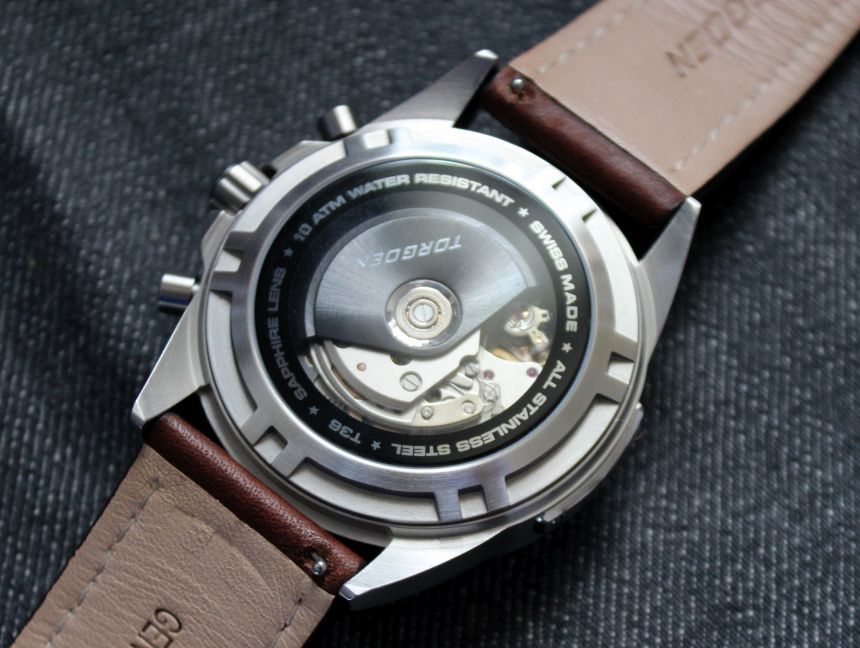 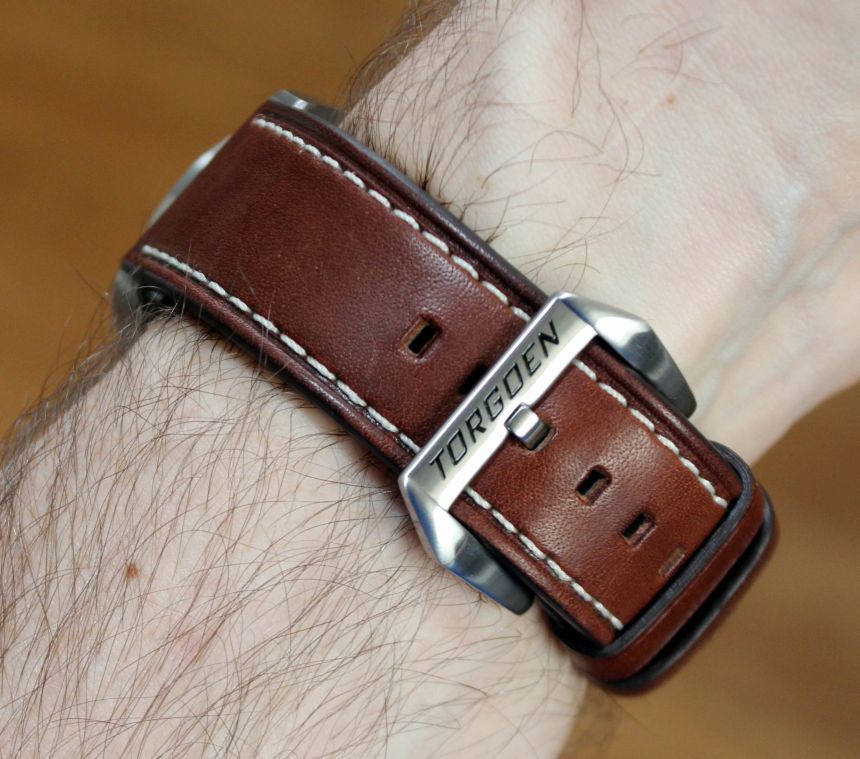 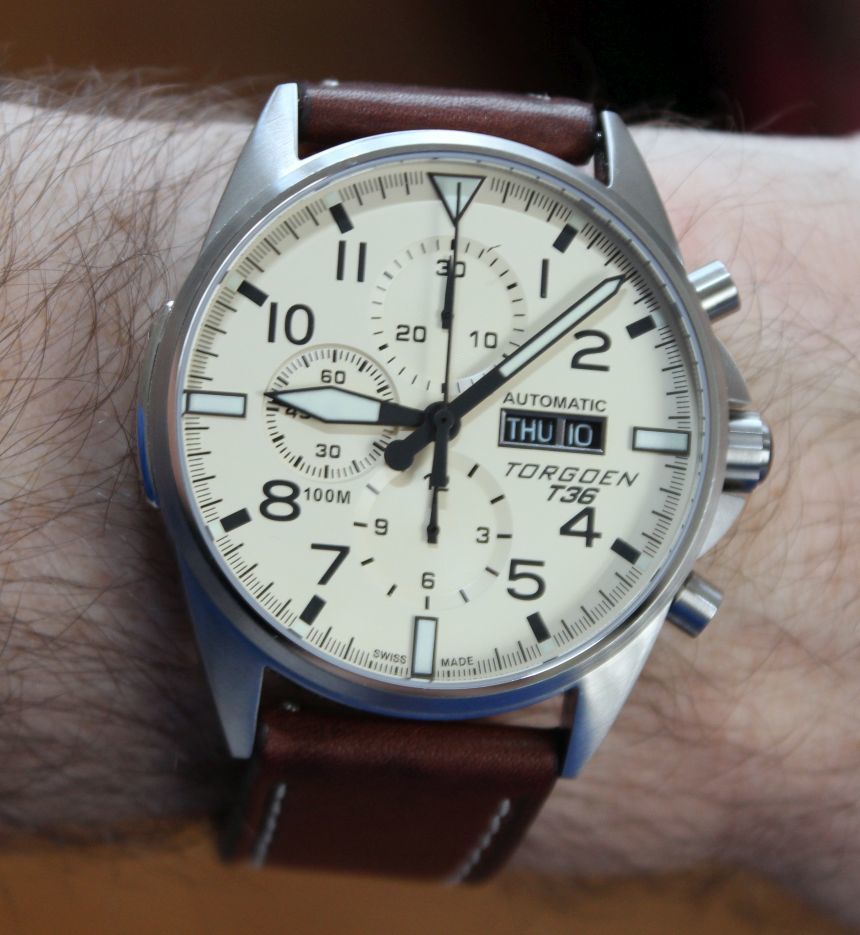 As you can tell by my photo of the number plate, there will be a maximum of 250 examples made, with no plans for a regular edition at this time. Also of note, only 99 have currently been made – so quantities may end up being well below the 250 they could make. Does that rarity translate to a successful watch? Time will tell. While this particular watch did not pull at my heart strings, I certainly do applaud the brand for moving into some higher-end offerings. While the watch industry is notably conservative, I hope that Torgoen will find their groove for their next higher-end offering and mix things up a bit more. Until then, we have the capable (but staid) Torgoen T36 Limited Edition T36303, available for a price of $2,300. torgoen.com

>Brand: Torgoen
>Model: T36 Limited Edition (Ref. T36303)
>Price: $2,300
>Would reviewer personally wear it: Nope – the complication and case sizing really are not in my wheelhouse.
>Friend we’d recommend it to first: They’re looking for a Swiss chronograph that follows traditional design cues.
>Worst characteristic of watch: The amount of extraneous text on the dial.
>Best characteristic of watch: I did rather like the indices and handset.