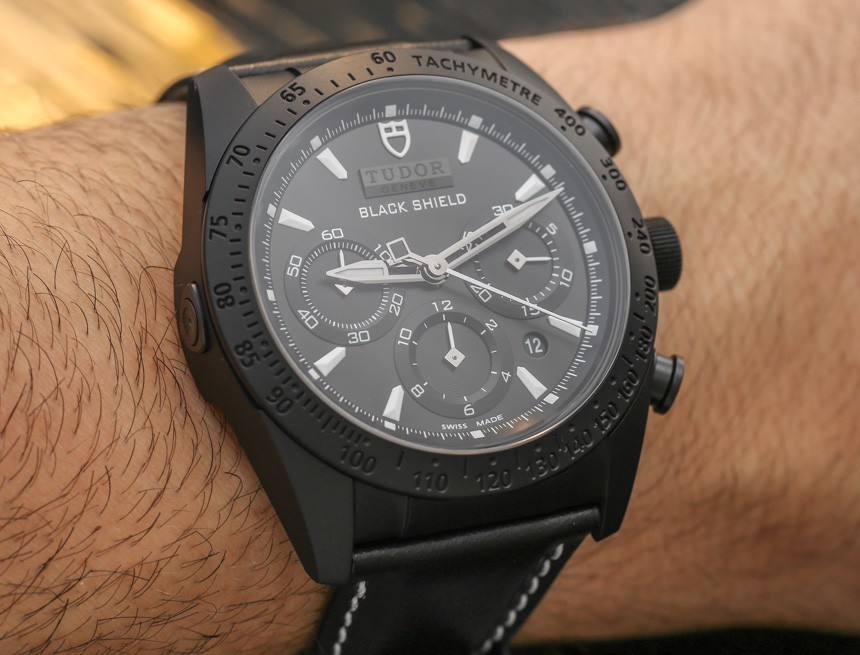 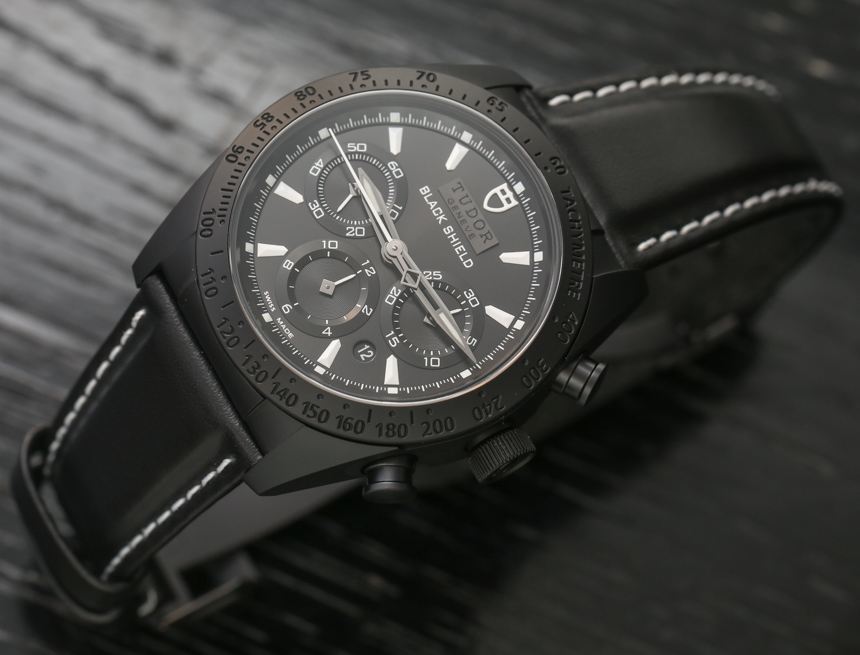 It used to be the case that it was easy to point out the difference with Tudor and Rolex watches because the latter used in-house movements and the former did not. All of a sudden last year, Tudor announced that the North Flag as well as updated versions of the Pelagos would contain new in-house made automatic movements. Currently, there is no in-house Tudor chronograph movement, so the Tudor Fastrider Black Shield makes use of a base Swiss ETA Valjoux 7753 automatic movement. Tudor regulates the 7753 and probably uses unique rotors on the movement (though, you can’t view the movement due to the solid ceramic caseback anyway). It is a solid movement, but the fact that it requires a pusher to quickly adjust the date is a bit of a drawback. That isn’t Tudor’s fault, but rather an aspect of the 7753 movement itself. The movement operates at 4Hz with a power reserve of about 46 hours, and once again, features the time, date, and 12-hour chronograph complications.

At 42mm wide, the Tudor Fastrider Black Shield isn’t a small watch, but it doesn’t wear massively either, thanks to the relatively modest lug-to-lug length. As I mentioned above, the case quality is superb, and it is easy to appreciate the small details on things even like the chronograph pushers and crown. As a sport watch, the Tudor Fastrider Black Shield was designed with 150 meters of water resistance, and the crown does screw in for added protection. 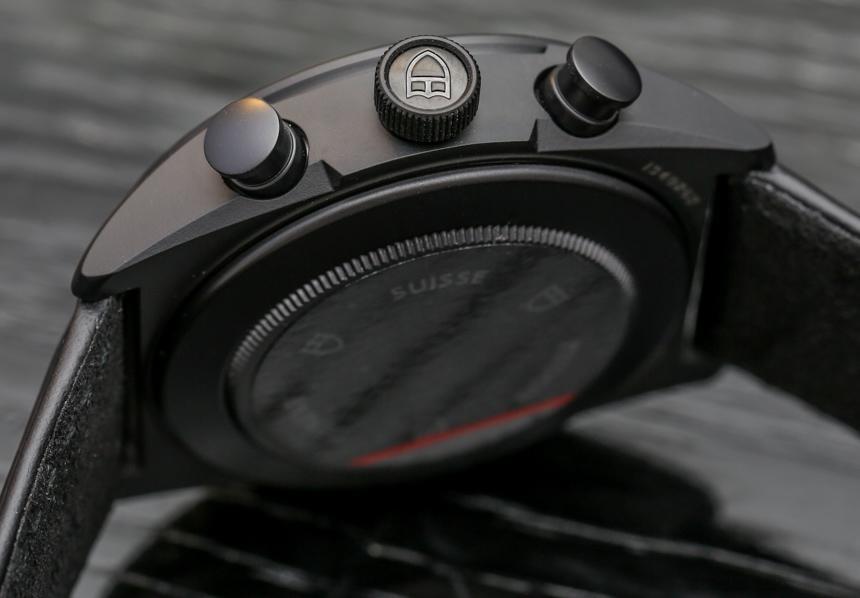 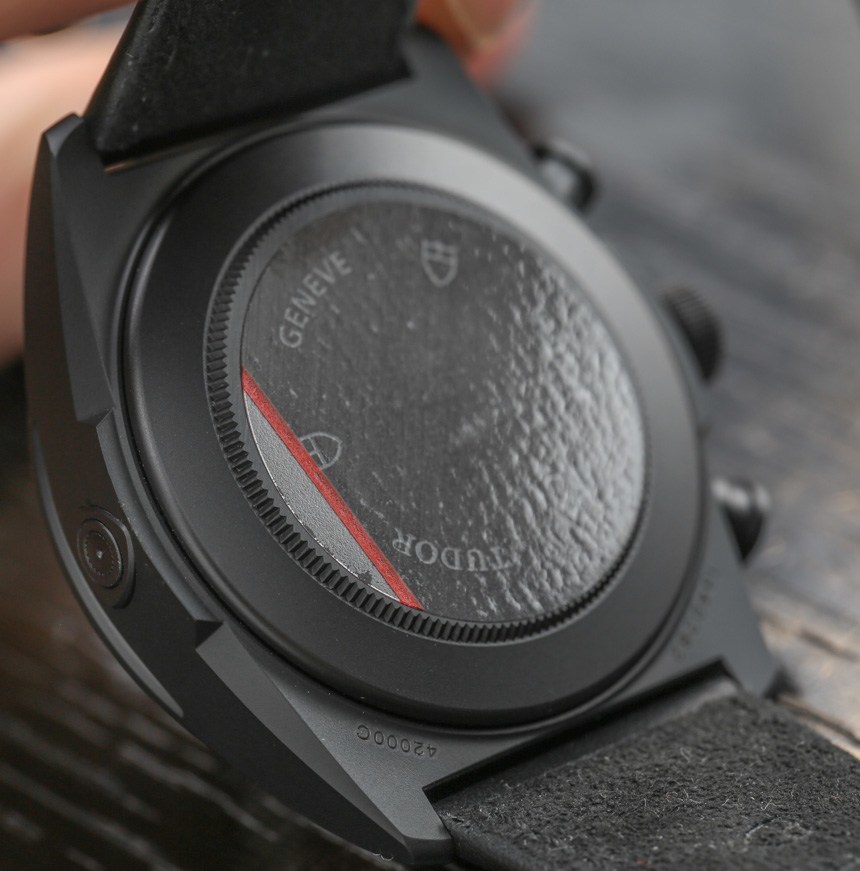 Whereas Rolex watches are for the most part famous for having totally sterile (blank) casebacks, the rear of Tudor watches aren’t terribly different. While you will find text on the rear of the Tudor Fastrider Black Shield, it isn’t much: “Tudor Geneve Suisse,” as well as the helpful case collection number (42000C) and a serial number. I really do appreciate that these elements are not only on the watch itself, but also relatively easy to see. 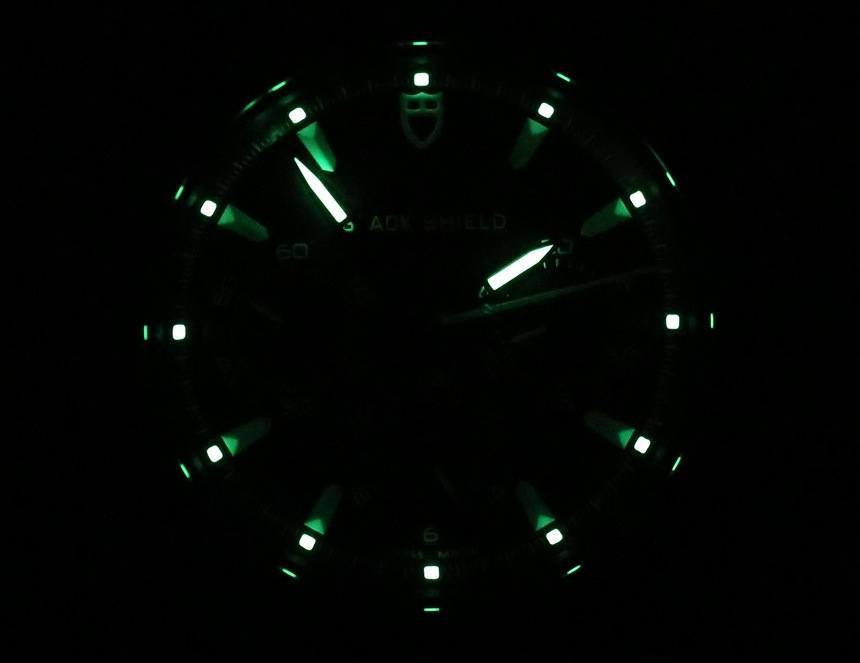 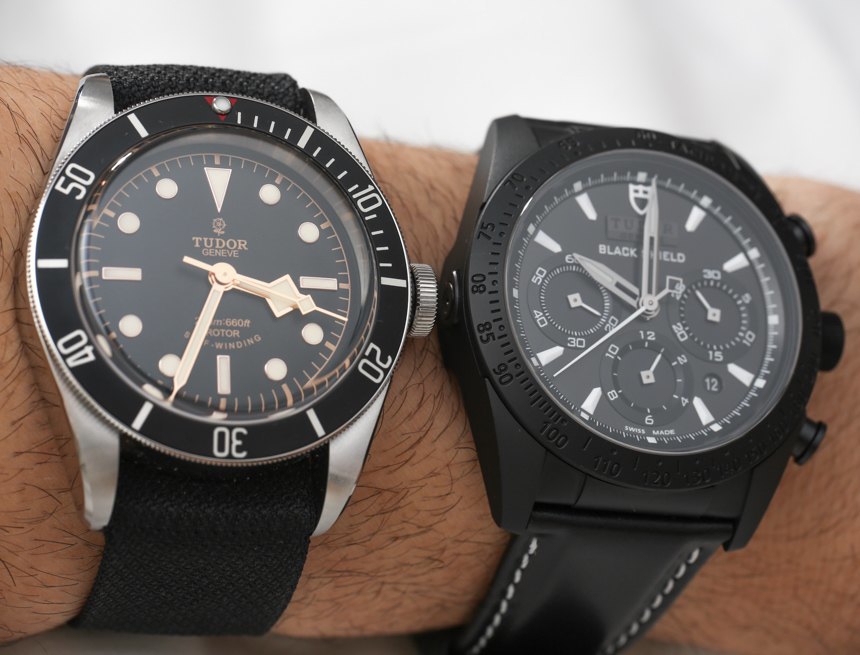 Nothing about the Tudor Fastrider Black Shield is particularly loud because, as a brand, Tudor is still relatively conservative. With that said, this is unabashedly a modern sports watch, and there is no hiding that along with a bit of the showiness that comes with it. You can actually see this a lot more readily in other versions of the Fastrider. The Tudor Black Shield models with their matte-black ceramic cases are a bit more mysterious-looking, and the most sober and restrained yet is actually this Tudor Fastrider Black Shield 42000CN model. A for a proper title my own personal nickname for the 42000CN is the Tudor Black Shield Black – as a riff on the also recently announced Tudor Black Bay Black watch. 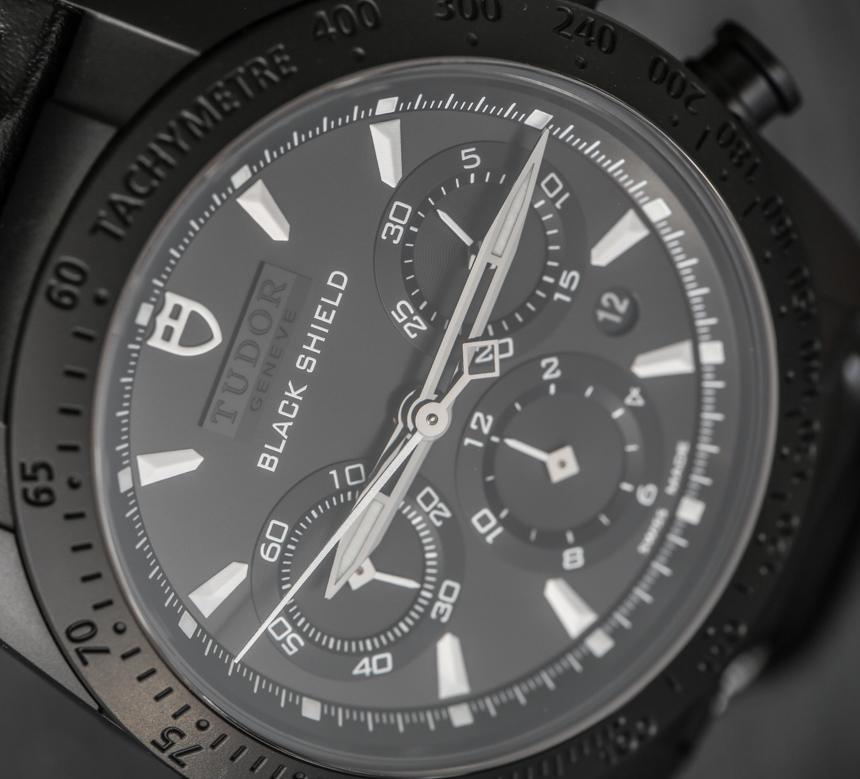 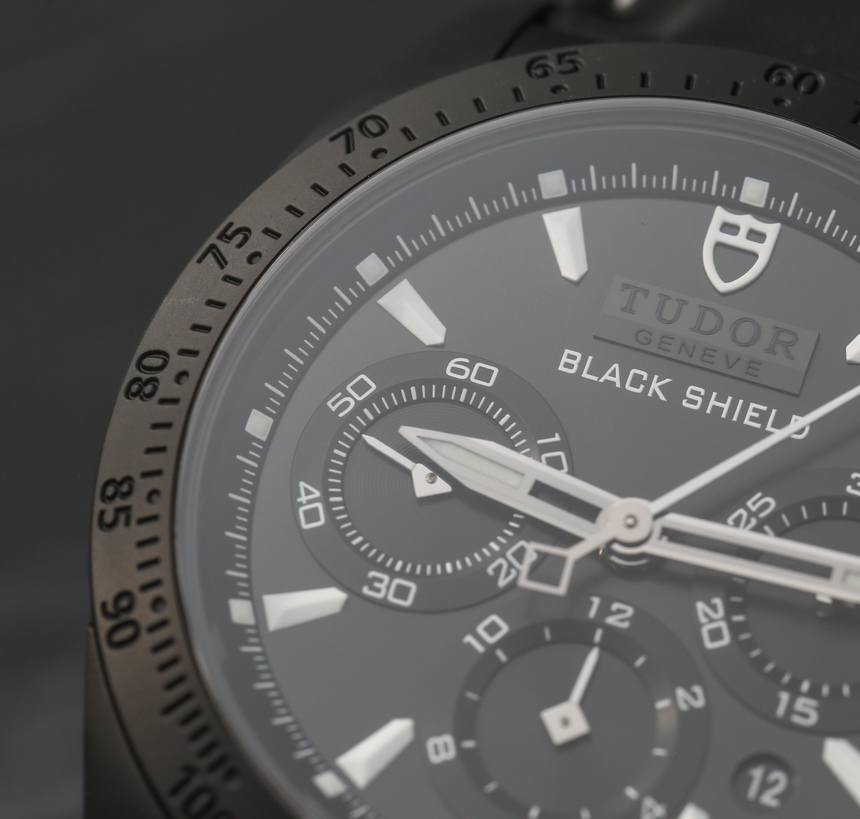 When done well, monochromatic watches are extremely versatile, and that is one of the main appeals of the Tudor Fastrider Black Shield 42000CN with its all-black-and-white appearance. That means it is both fashionable and easy to enjoy for a lot of different types of consumers. Modest, yet sporty and modern, the Tudor Fastrider collection is the natural contrast to the Tudor Heritage Chrono which is currently the brand’s other major chronograph product. Probably the most widely appealing Fastrider model to date is this Black Shield “Black” 42000CN with its understated masculinity and distinct “tool watch” appeal. 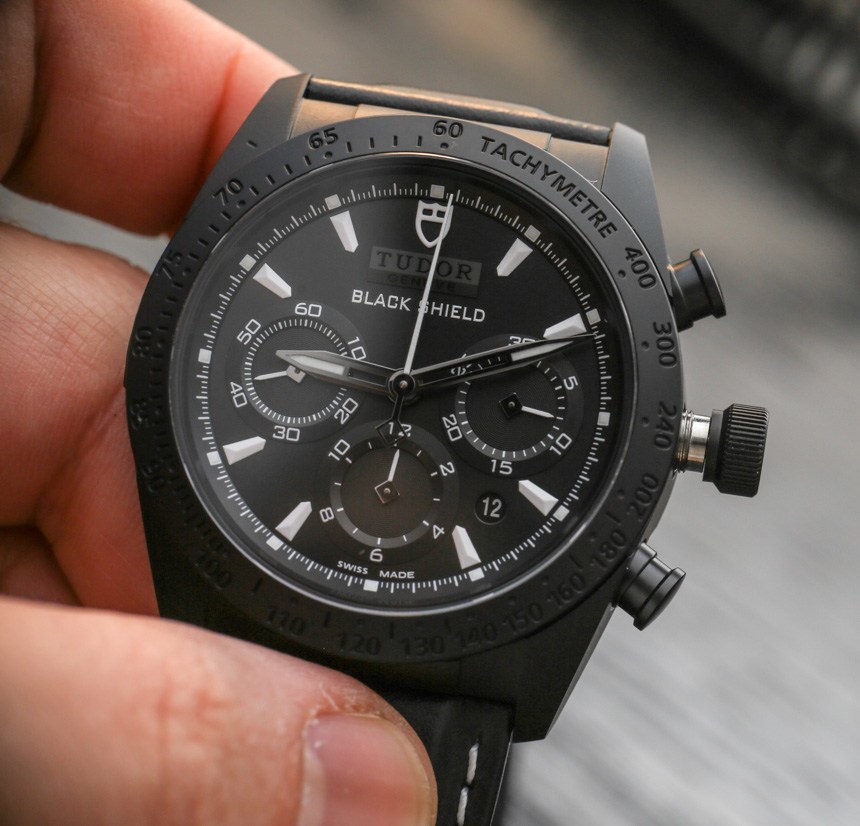 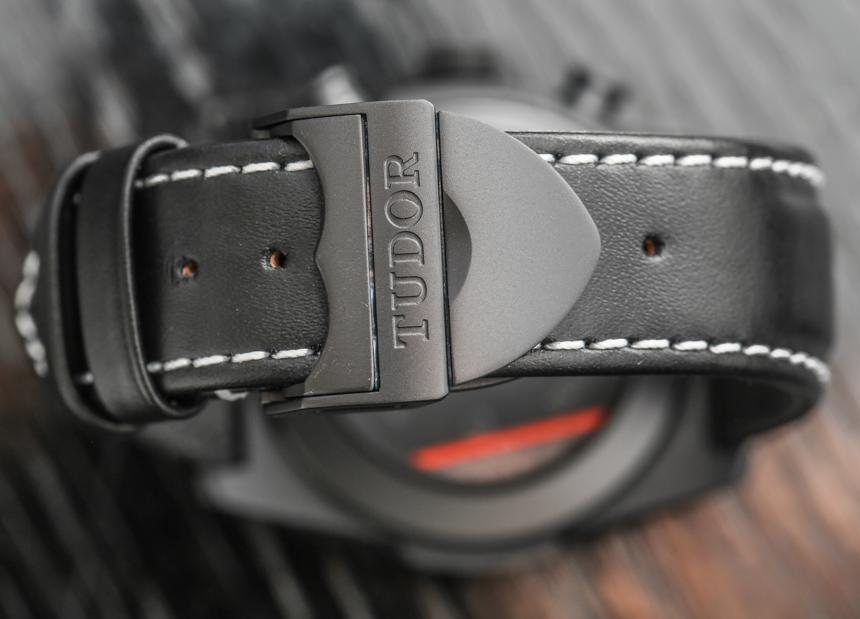 Perhaps, the most conversation-worthy element of the Tudor Fastrider Black Shield XDiavel doesn’t have anything to do with the watch itself, but rather with the purchase process. Tudor has explained that the 42000CN will not be sold normally with other Black Shield watches, but instead, will be something that must be specially ordered at Tudor dealers and boutiques within the USA only. What does that mean? I am not totally sure, but I suspect that these models will not be on display and must either be specially requested by the customer to either purchase or simply to view. Tudor has said that they want this watch to be more “exclusive” and for people who know about it such as certain Ducati customers (as well as hardcore watch lovers). It seems that the watch will also be produced in smaller numbers and be much less available. That and its handsome design all seem to suggest that, at some point in the future, collectors might be really into finding these. This is one of the clever ways today’s important watch brands are creating future collectibles. In the US at least the watch is available only via special order but that might not apply to other markets where the watch could be available in a normal retail environment. Price for the reference 42000CN Tudor Fastrider Black Shield is $4,925. tudorwatch.com