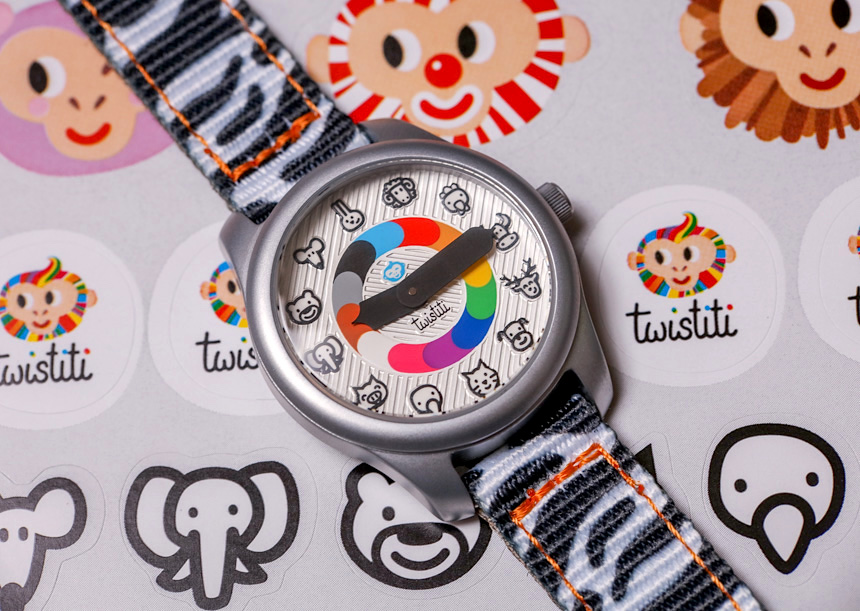 Twistiti Watches From Belgium For Your Toddler 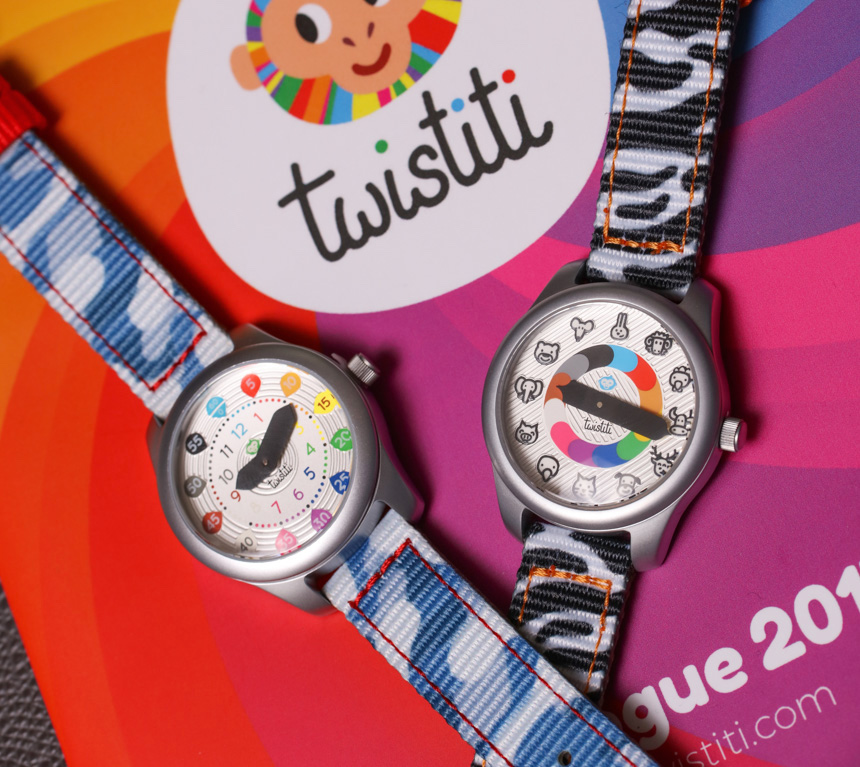 Many watch lovers who are new parents eagerly anticipate the day they can begin to introduce timepieces into the lives of their children. Most people I know who have a passion for timepieces began their interest as children. Not necessarily being introduced to luxury watches per se at a young age, but at the least, being accustomed to the pleasure of wearing a basic watch early on in life. One such line of products aimed at both young children (and parents as the buyers) is the Twistiti Watches collection from Belgium. The self-proclaimed “specialist children’s watch retailer” has recently launched a chipper collection of friendly looking analog watches for kids three years of age and up. 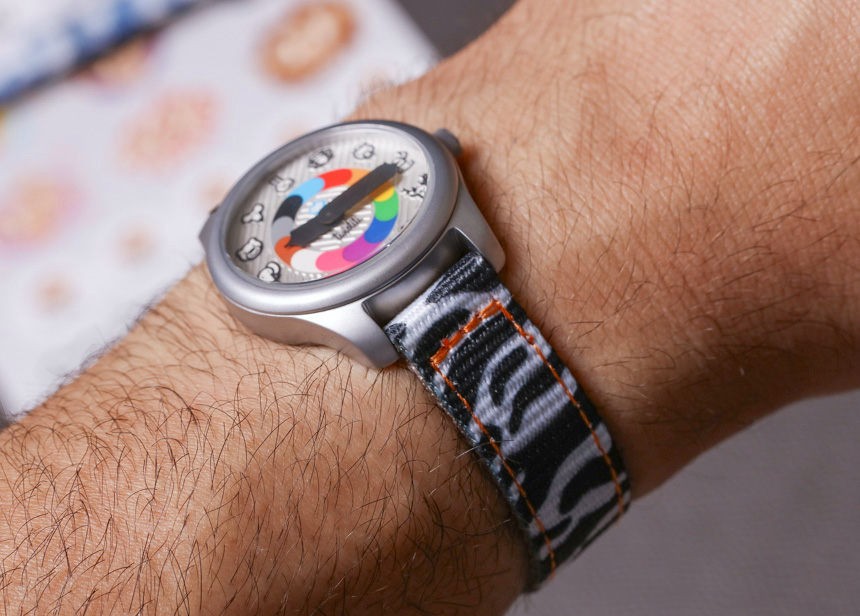 The photo below shows the watch on its intended demographic but I couldn’t help trying it on for kicks. 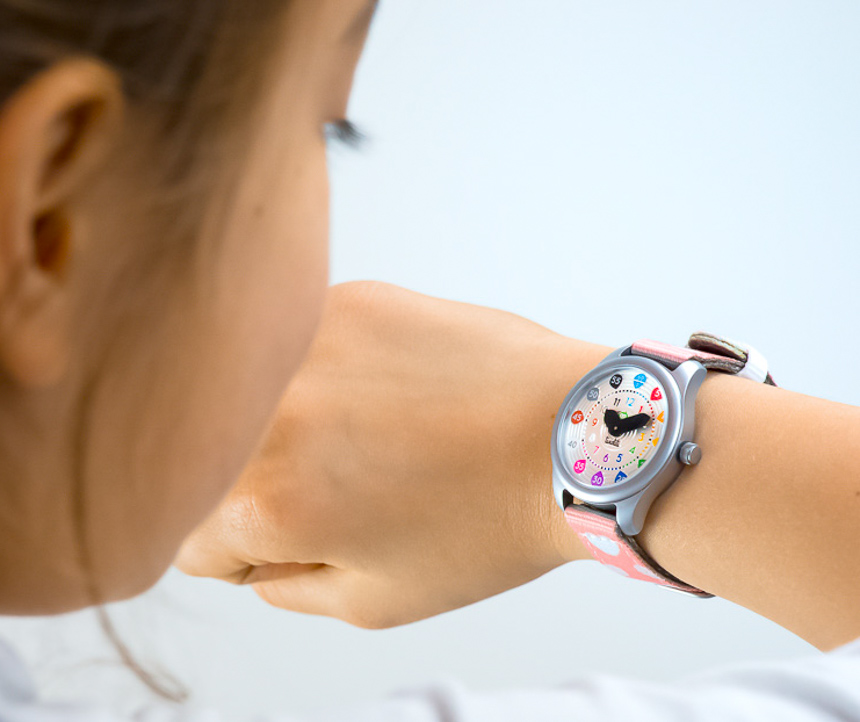 The founder of Twistiti told aBlogtoWatch that his aim was to offer something clearly aimed for children, but that allows them to segue into more traditional types of analog watches at an older age. The two models currently available are the straightforward-named “Animals Watch” and “Numbers Watch.” There are also wall clock versions of these dials as well as available straps. In many ways, Twistiti has taken a more “adult” watch design and sales concept, and adapted it for younger buyers. An example is the use of quick-release straps and the ability to buy extra ones. Your toddler is about to get a quick lesson in wrist fashion. 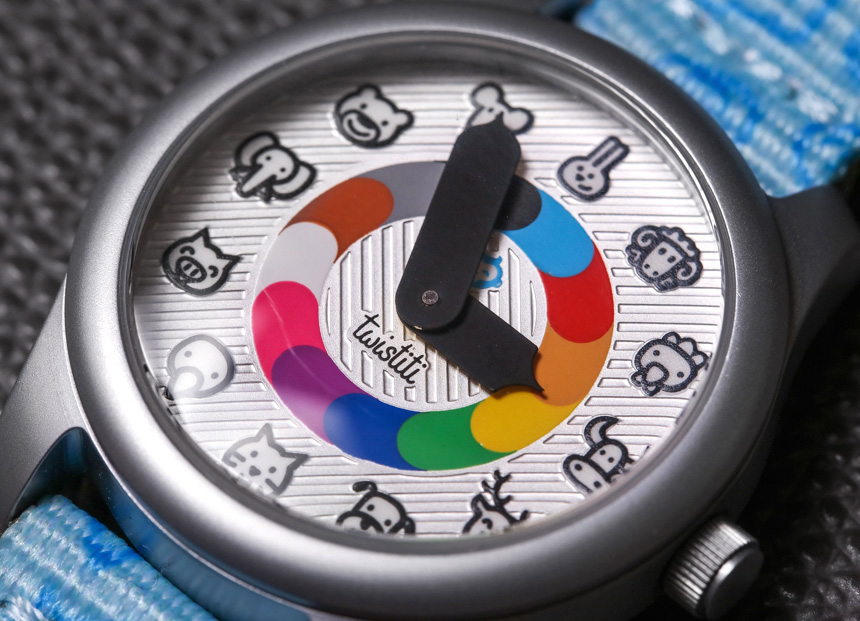 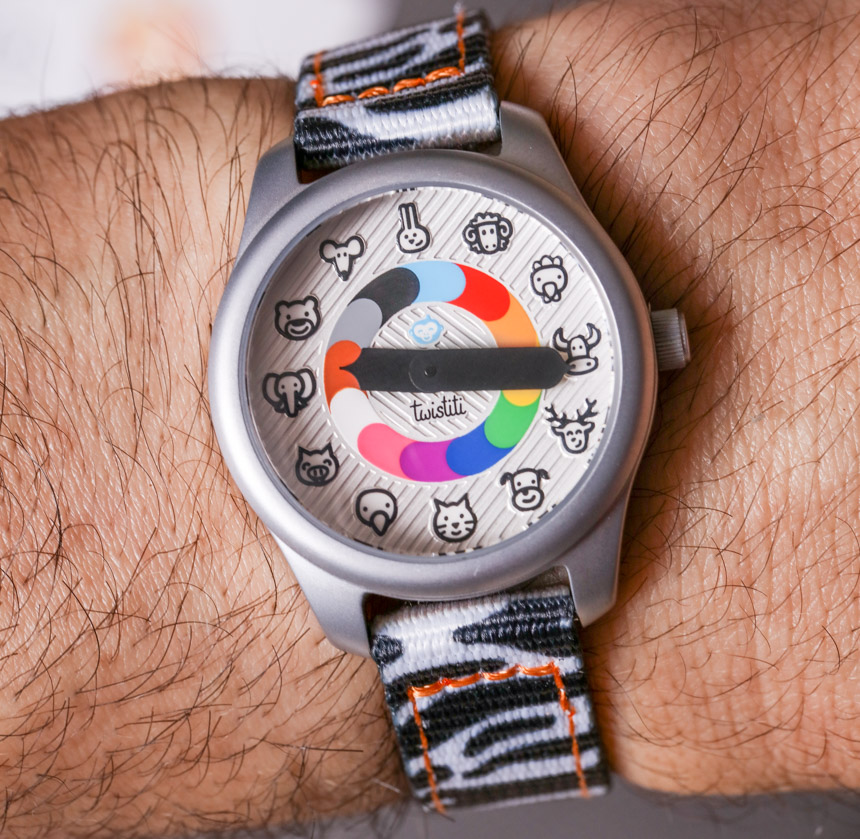 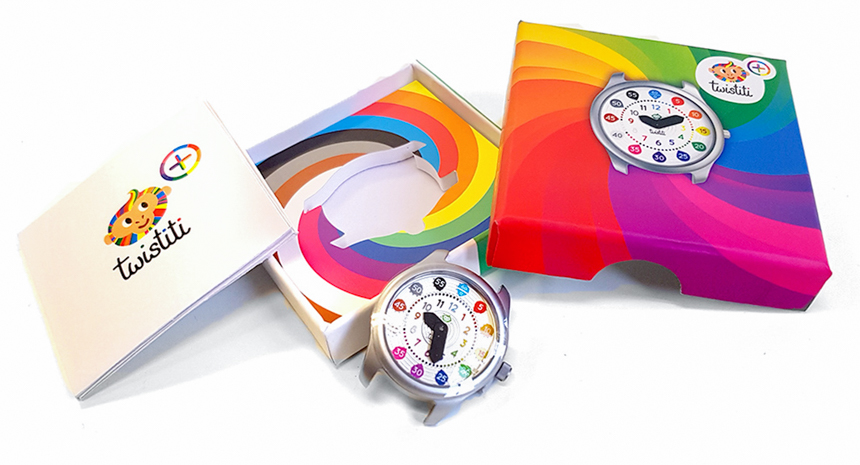 Watches for kids aren’t a new thing at all, but most range in aesthetic from kitschy to overly-themed (Disney princess watches anyone?). While Twistiti watches are clearly meant for young kids, they appear to be watches first and then cute second – not trying to leverage any other entertainment properties or toy universes that your child might like. There is also a typical, refined sense of calming European design which I think is nicely done here. 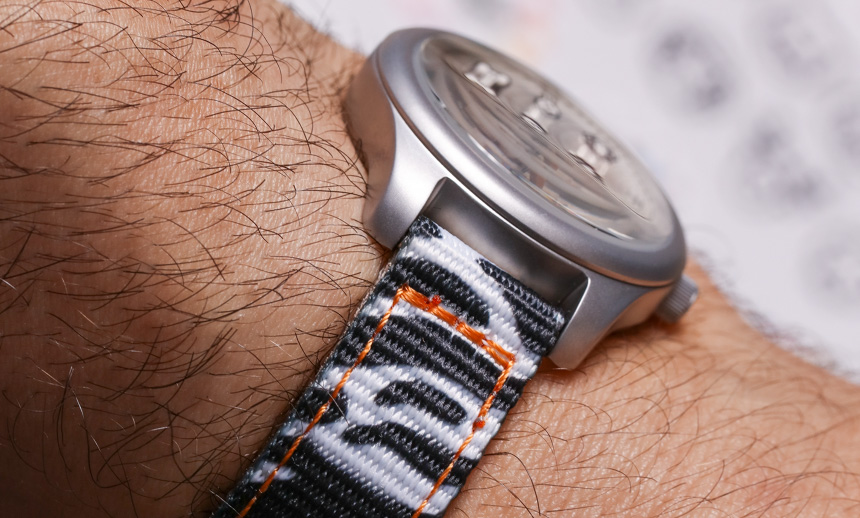 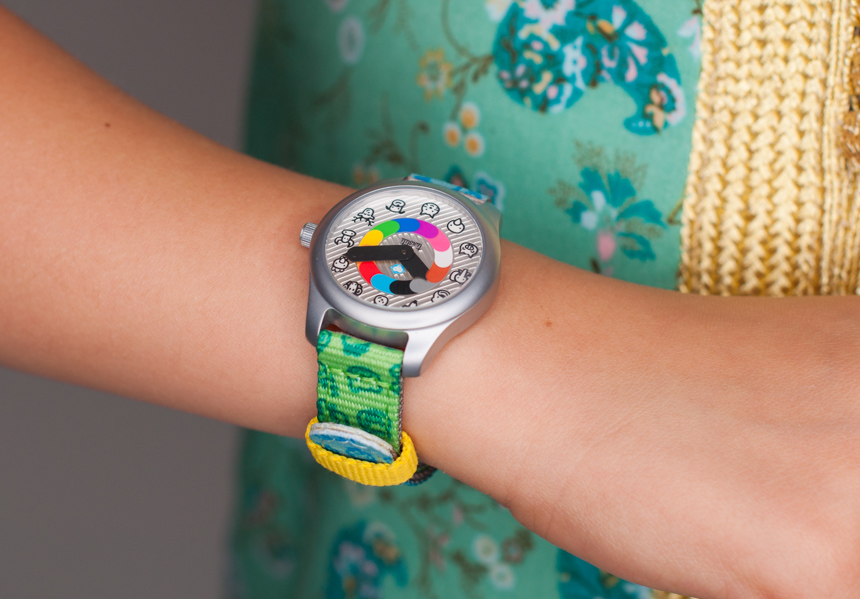 Hands-on, the watches are not as small as you’d think, but are not designed to be petite on the wrists of children. They look like really cute women’s watches, and the mixture of strap styles is impressive. The sandblasted case and colorful design are clearly aimed at satisfying kids, but if you look closely, there is a serious watch in there. I only wish the dial designs were a bit more logical and educational for young minds. 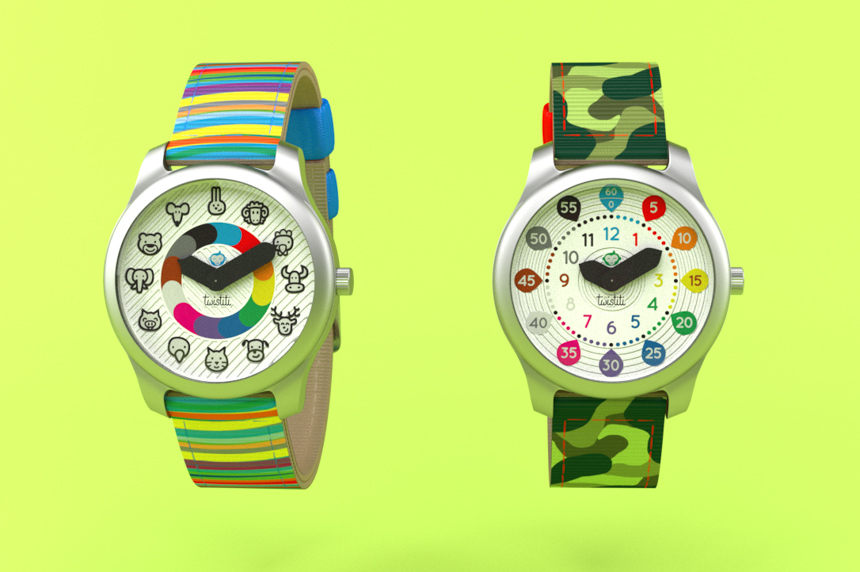 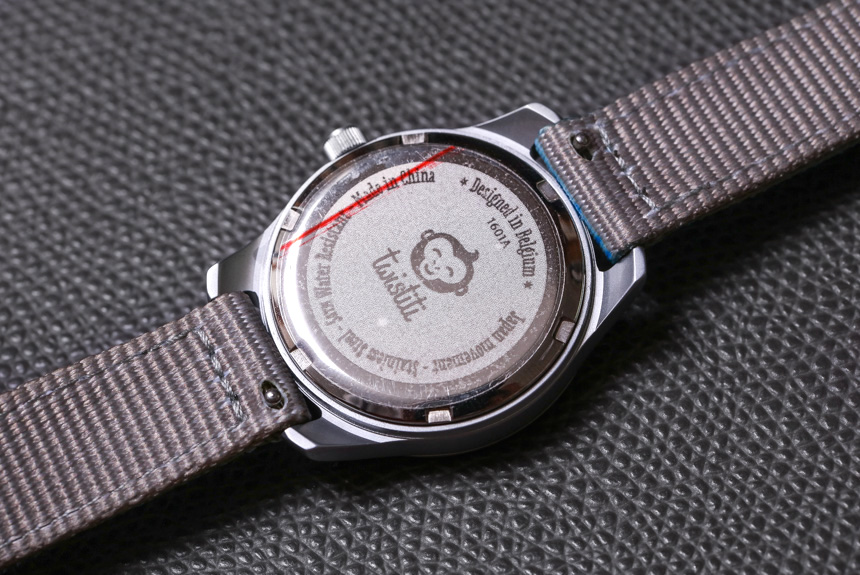 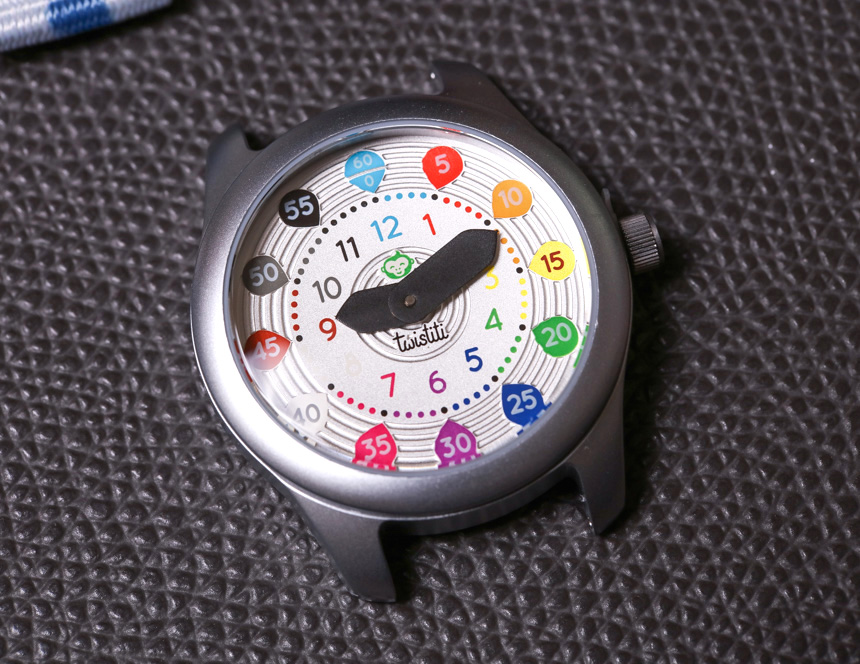 Twistiti refers to their Numbers Watch as the more “mature” of the two options for “older” kids who are learning how to tell the time with numbers. Using colors and shapes for fun, The Numbers Watch allows for kids just learning how to tell time on analog dials to easily count numerals and easily spot indexes along with easy to spot thick hands (that I actually wish were a bit longer). 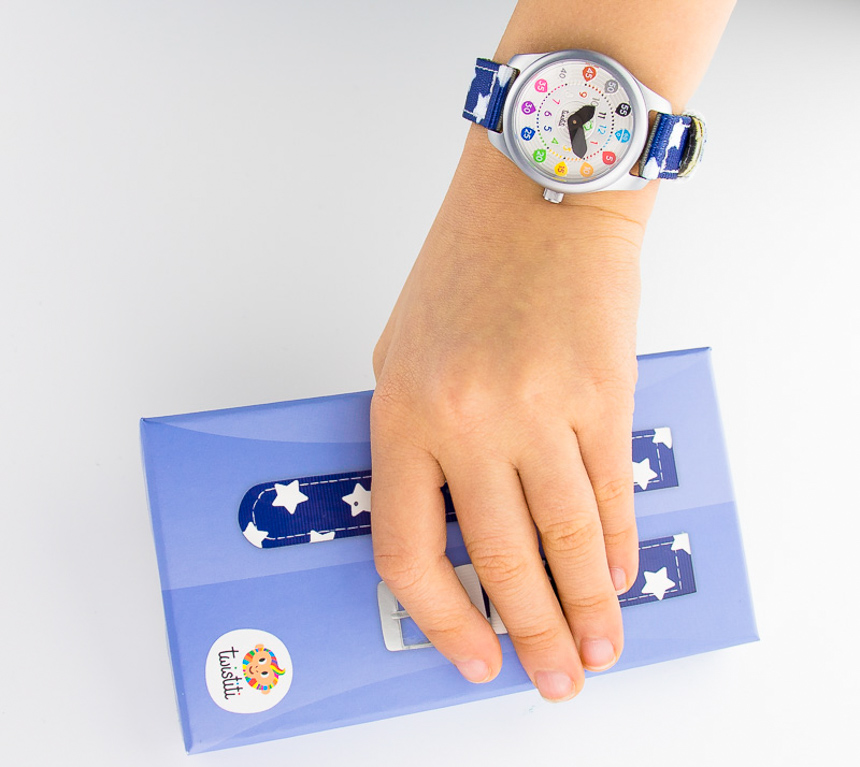 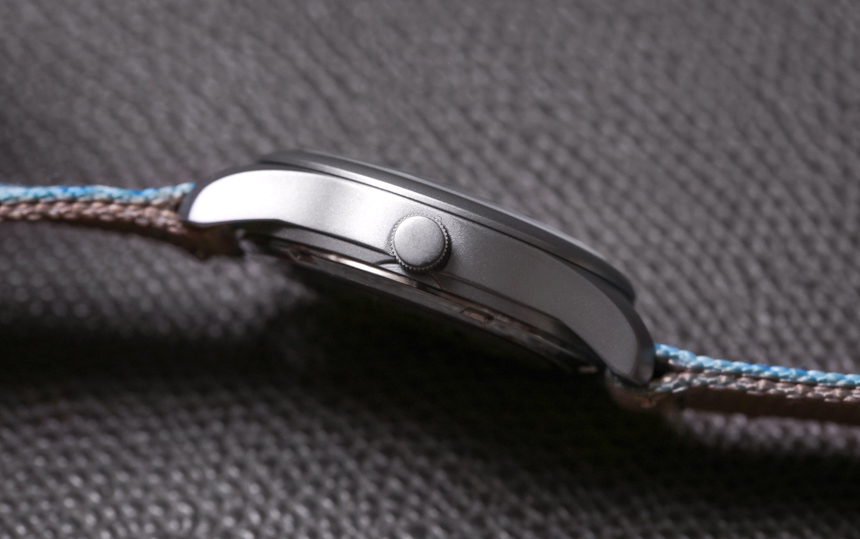 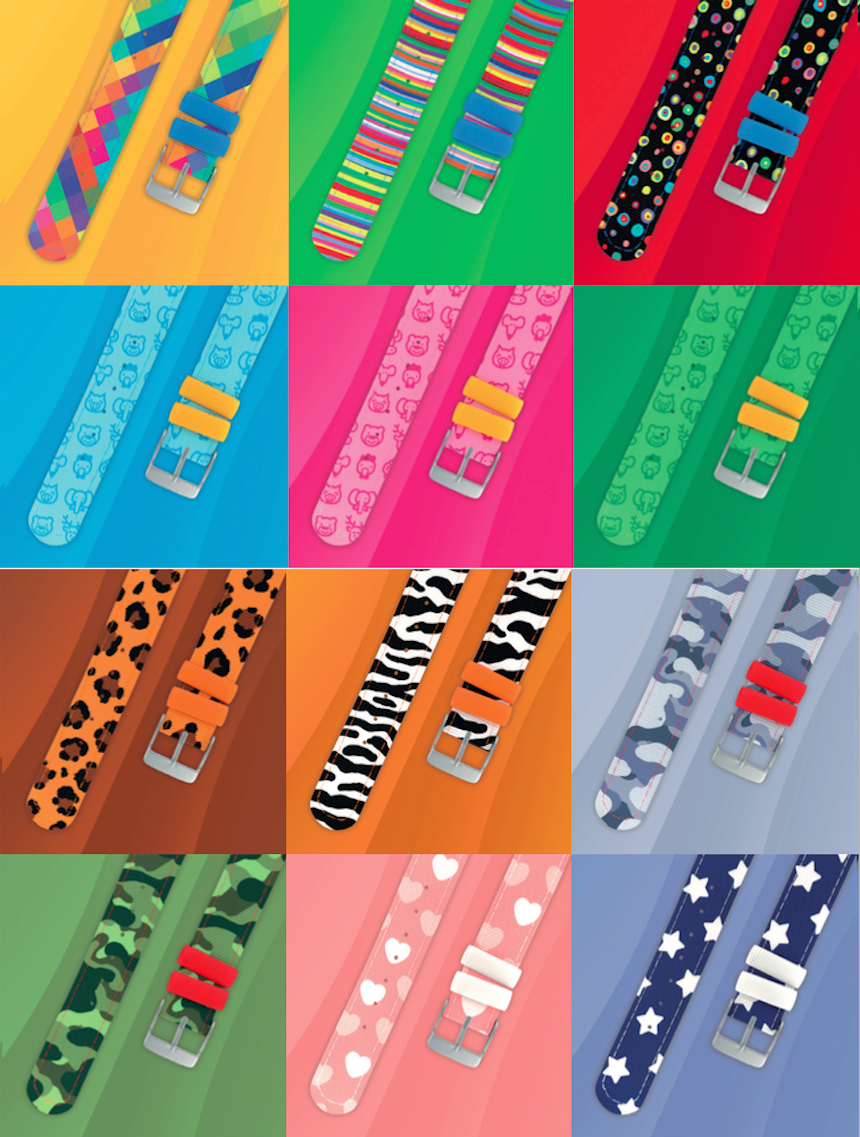 Both the Numbers and Animals watches sport a simple and classic-looking satin-finished 316L steel case with a K1 mineral crystal and 50 meters of water resistance. Inside the watches are Japanese Miyota 2025 quartz movements and the dials indicate just the time with hours and minutes (seconds would have been a nice feature for the kids – but then again you need to let them “graduate” to a chronograph in the future right?). The case is 30mm wide (good for tiny wrists), with a 36mm lug to lug distance. The lugs are 14mm wide, meaning if you don’t get Twistiti-supplied straps, it might be difficult to find straps that small (that are nice looking). The available straps are double-layered nylon (comes in two length sizes) and all have fun and appealing colors and designs that I think kids will really enjoy. The strap variety is welcoming, and I can even see a few adults being a bit jealous over the design options. 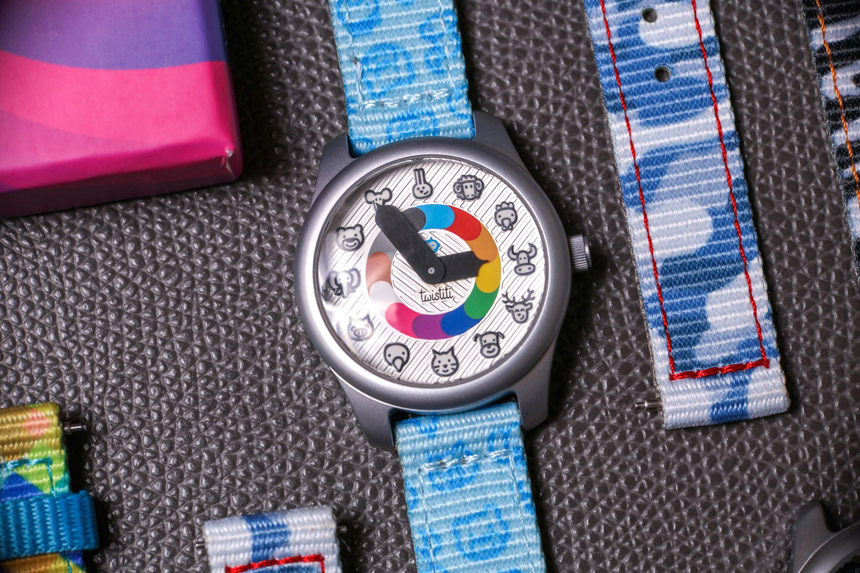 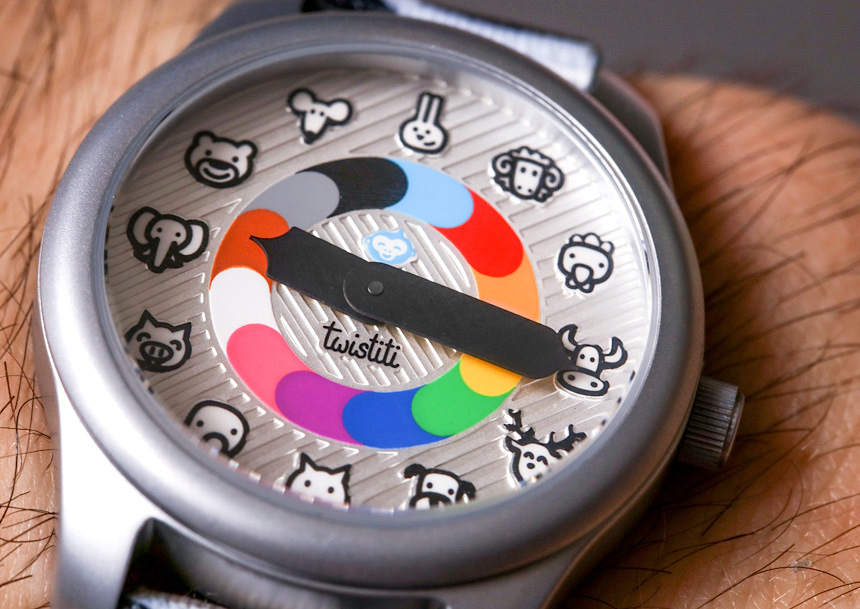 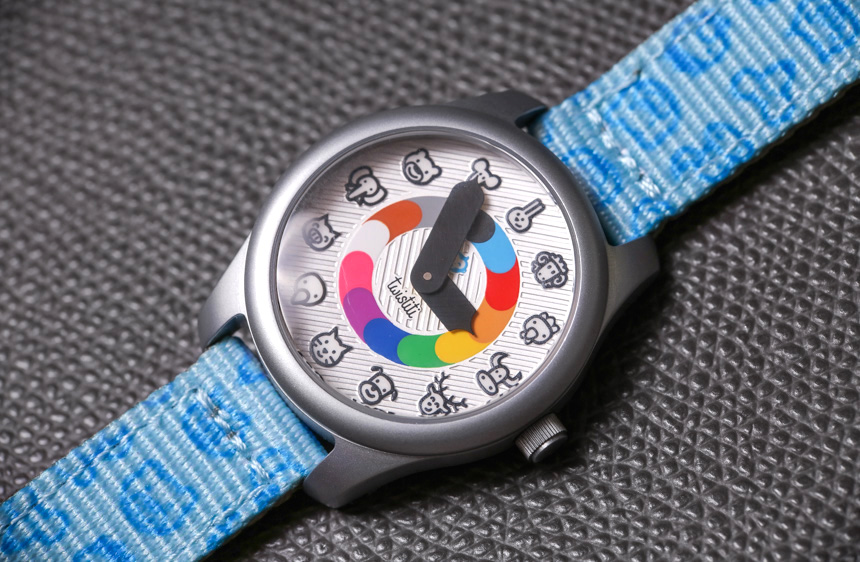 Twistiti’s Animal watch collection is more playful with a combination of colors and animal faces as the hour markers. The dial looks nice, but I think there is a bit of a missed opportunity. The animal faces are more or less random. Meaning there doesn’t seem to be an association with the hour marker the animal face represents and that hour. For example, the 9 o’clock hour marker has an elephant face. Why not choose an animal whose name begins with the letter “n” or an animal face that is designed to look like the number 9? 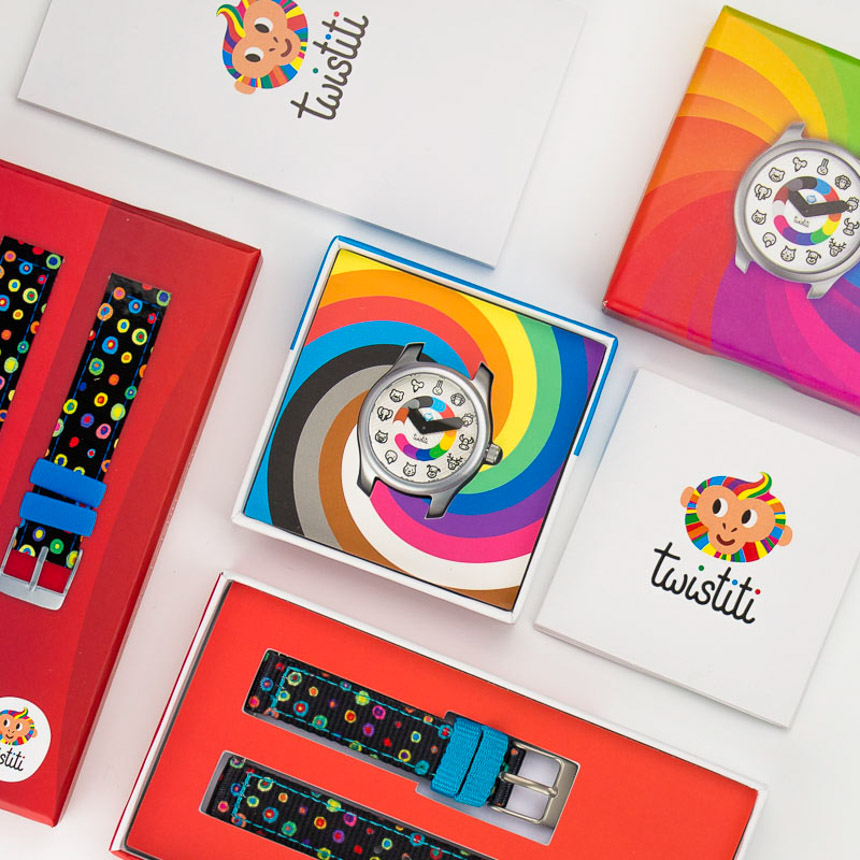 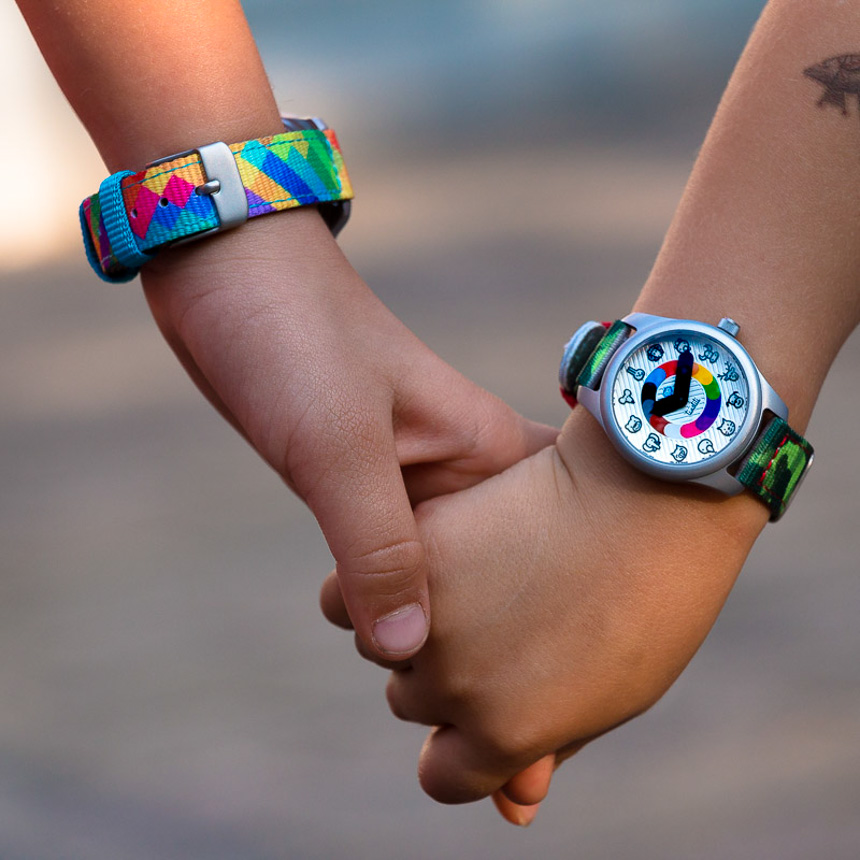 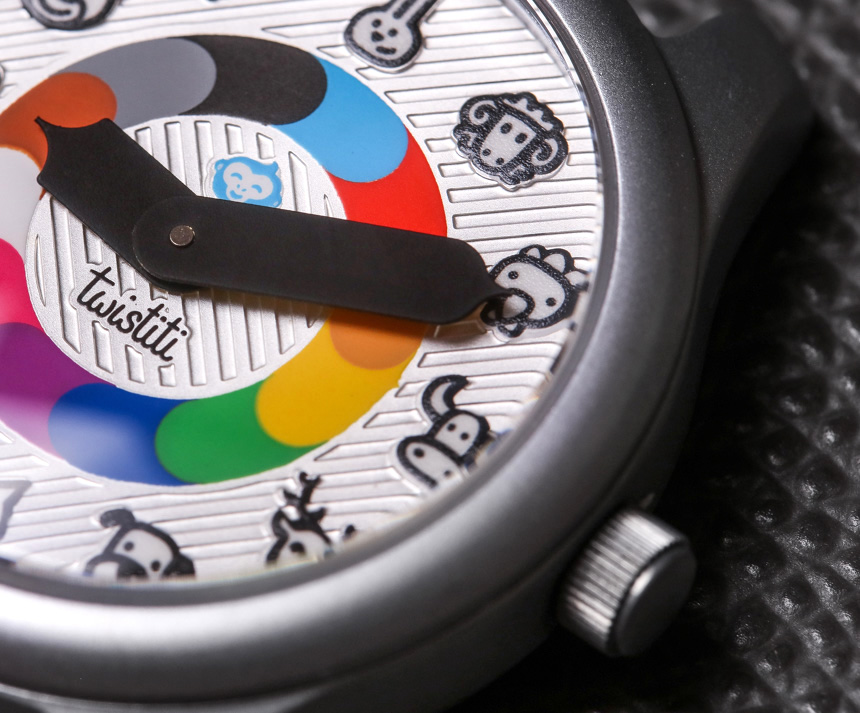 More so, the rainbow color wheel – while attractive in design – seems too random in its implementation. The colors themselves don’t perfectly line up with any particular hour marker, and it isn’t clear if the colors are there to help read the time or just for an aesthetic addition to the dial. I believe this is why Twistiti keeps mentioning that the Animals watch is for the youngest of children, while the Numbers watches are for slightly older children. With that said, I think that there is a bit of a missed opportunity here in the design of the dial to be a bit more clever when it comes to actually reading the time or helping to combine the learning of various pieces of information such as reading the time, letter and number association, color naming, etc… 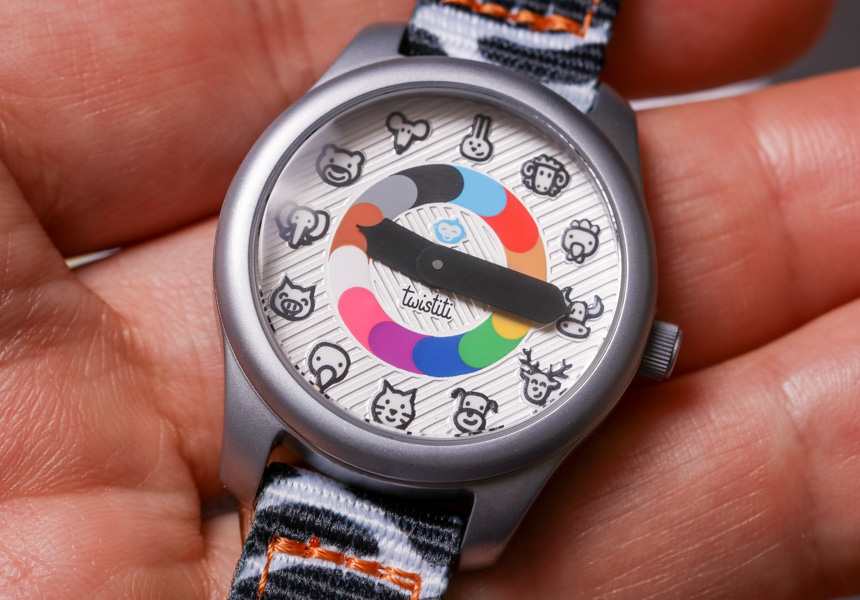 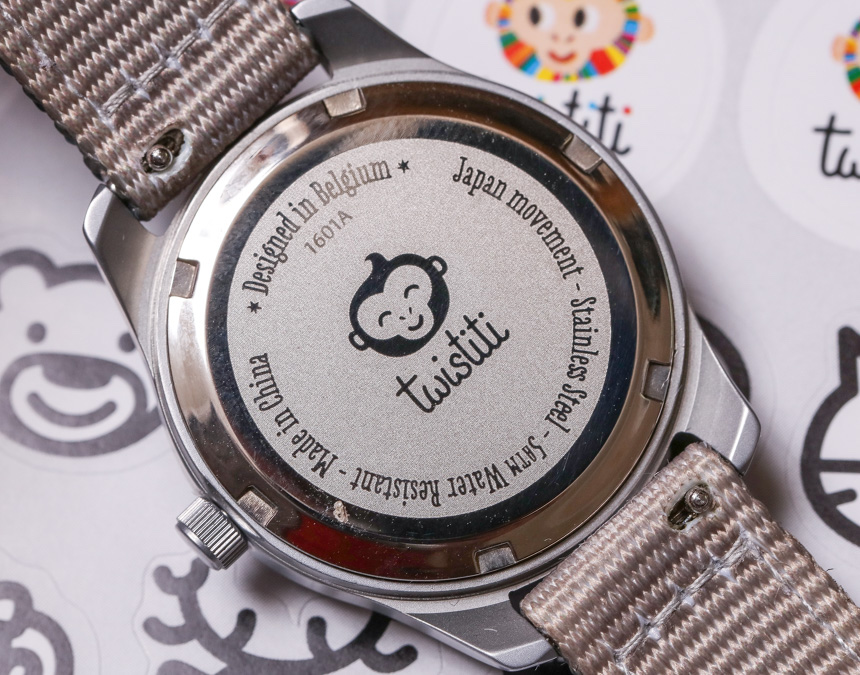 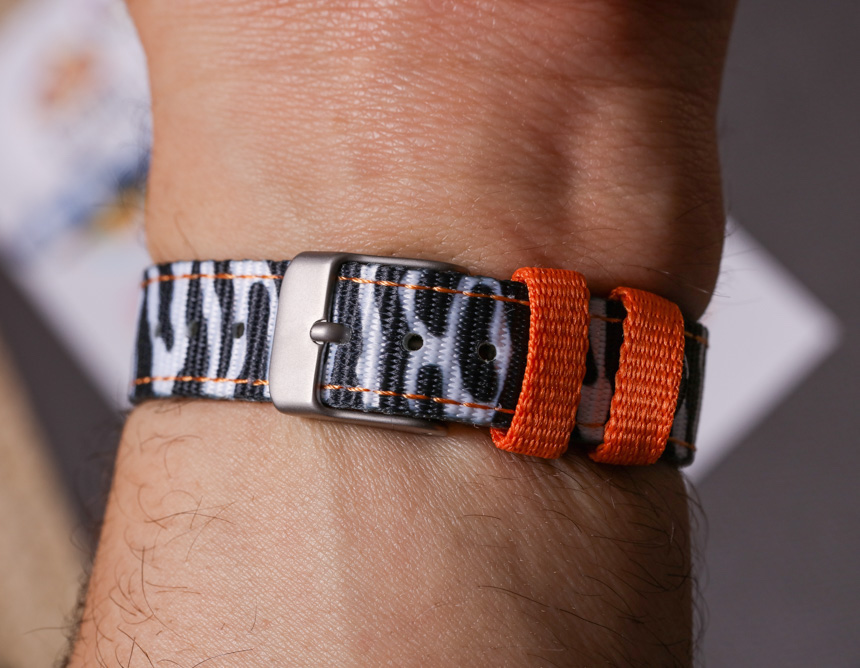 There are more reasons to give a child a watch beyond wanting them to grow up as timepiece lovers (of course there is a similar chance they will grow up as being ambivalent to timepieces). In 2014 I wrote a little memoir about my late father and wearing timepieces very early in life as a young child. I recalled that wearing a timepiece and not only being aware of the time but being able to set my life by it gave me an important sense of personal responsibility. While I’m not a parenting expert, I do feel that the introduction of a tool like a timepiece is very valuable in allowing a child to understand how fast (or slowly) time passes, as well as giving them an opportunity to know when to start, stop, or change activities based on daily schedules. I would find it difficult to believe if anyone disagreed that children learning the importance of time measurement (and mere awareness) starting from an early age was a bad thing. 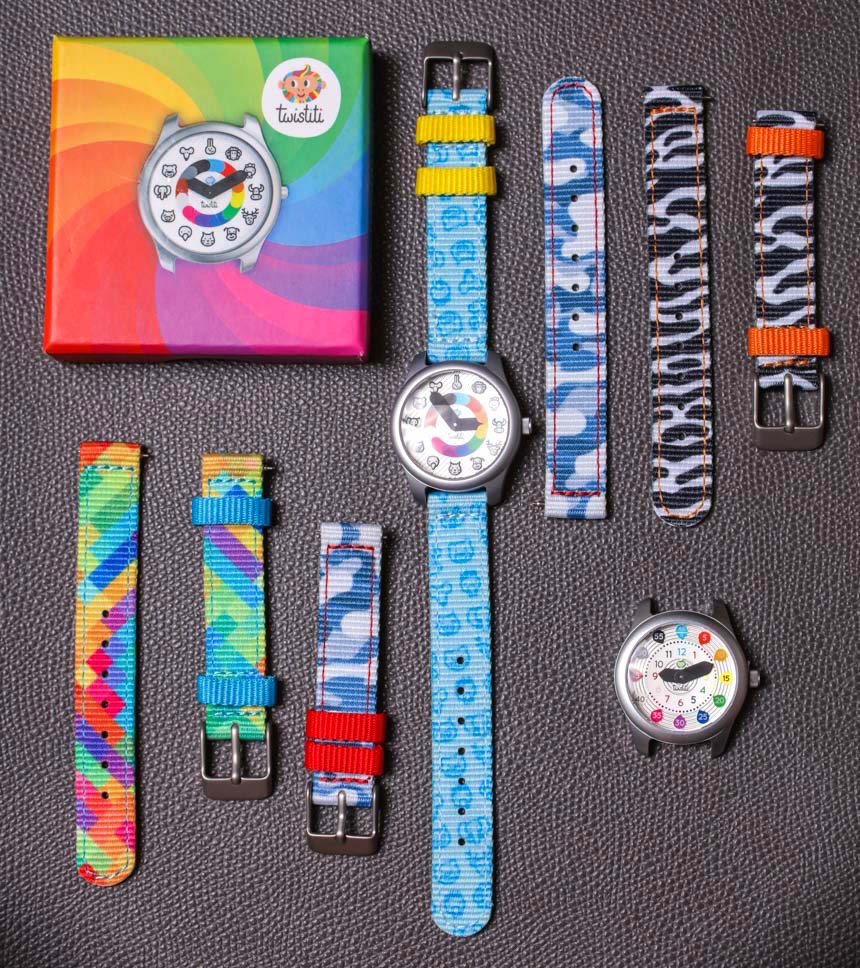 Twistiti sells their watches online and is a rare form of “serious watch but for kids” that I think a lot of parents will like. Prices are pretty cheap, even though these aren’t strictly speaking, ultra-budget items. Though given that they are meant to be useful for years, you’ll likely find that your young children will get more use out of a friendly timepiece than a similarly-priced toy that might easily become more quickly forgotten. With a watch case and strap, Twistiti watches are $49.95. Just the case without a strap is $34.95, and the straps are $14.95 each. The Twistiti wall clocks are $39.95. twistiti.com