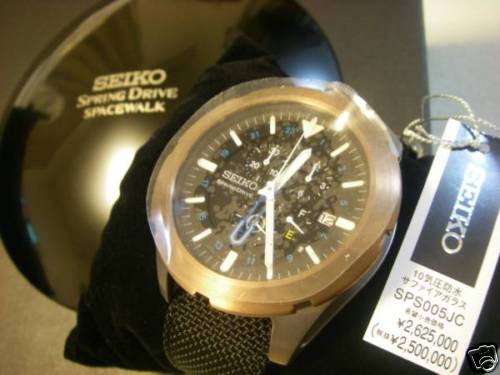 This is why I love eBay, cause stuff like this shows up on it, and I have no idea how. You know that I love the Seiko Spring Drive Spacewalk watch that I initially discussed here, and then once again here when I announced that Seiko was going to offer a limited edition Spacewalk Commemorative Edition of 100 pieces. Seiko originally made just 6 of the watches. It was made for Richard Garriot and worn by him into space. That specific piece sold for over $45,000 several months ago. It now looks one of the rare 100 Commemorative Edition pieces is being auctioned off on eBay, brand new. Starting bid is $27,500 – just shy of the roughly $28,000 – $29,000 that the new Spacewalk Commemorative Edition models retail for being just now released. 100 pieces, and they are going to very hard to find.

So if you want one of the new Seiko Spring Drive Spacewalk Commemorative Edition watches made to go into space, or where ever else you might find yourself, check out the eBay page here.