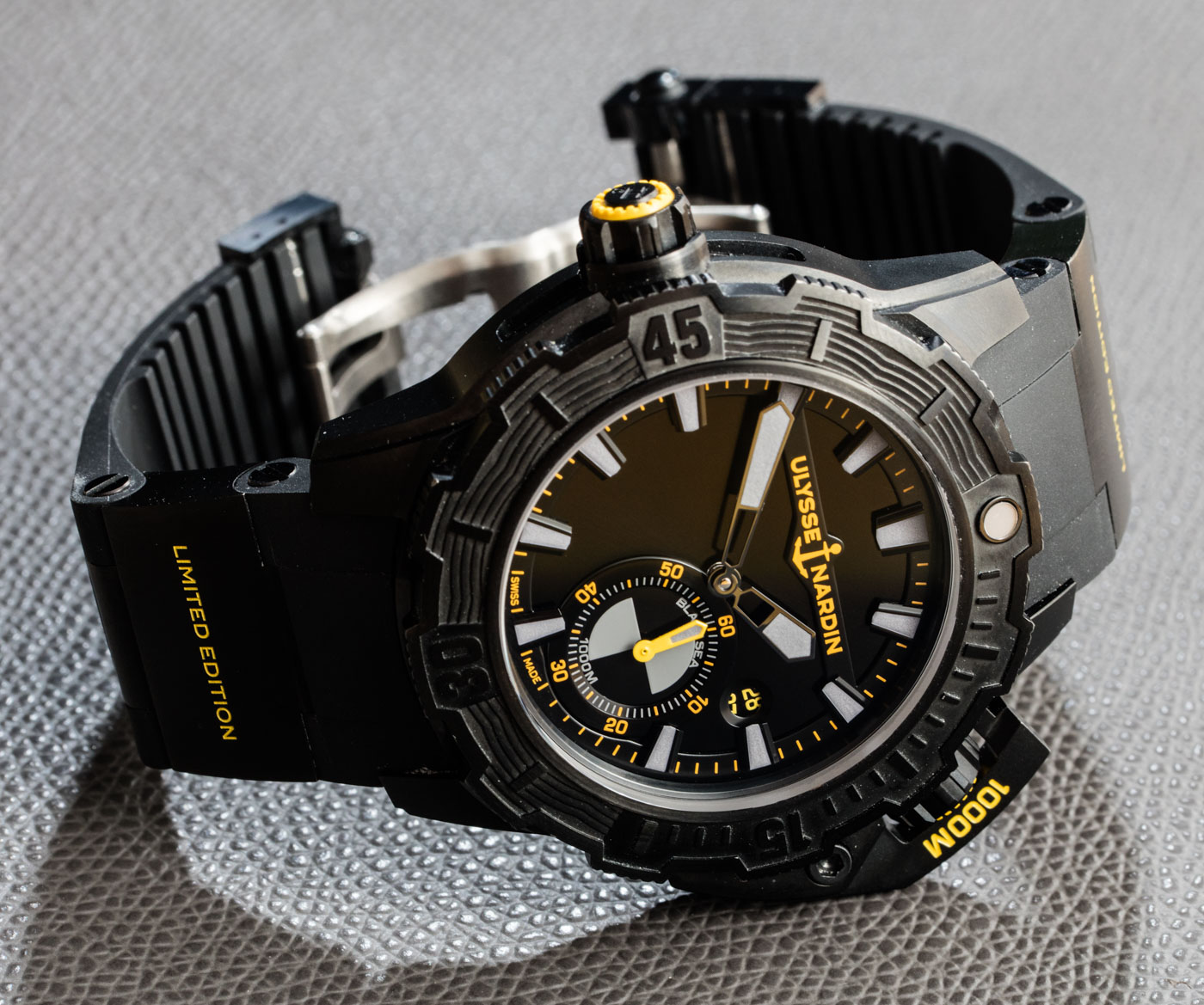 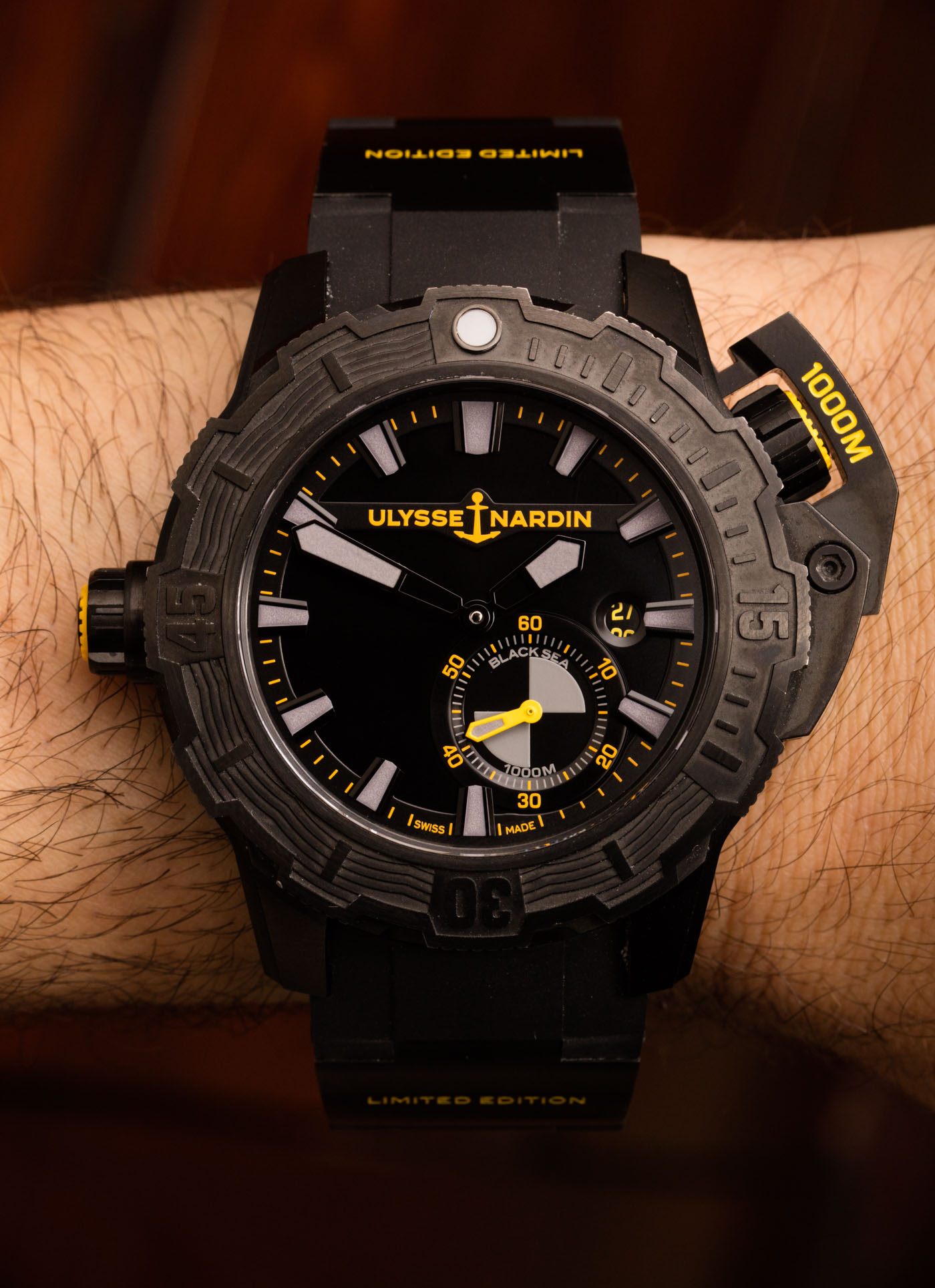 The story of the watch is very simple. The story of why watches created in this way can be commercial successes, and what collaborations like this mean to the luxury watch industry, is a longer and deeper tale. I’ll do my best to sum up this new satisfying limited edition Diver Deep Dive “One More Wave” watch from Swiss Ulysse Nardin as completely as possible, but the ongoing tale of how products like this are important to today’s timepiece industry is a longer conversation. Now, please focus your attention to Southern California, in Coronado near San Diego where some of our country’s most elite fighters are trained and where many of them end up after their tour of duty.

Francois-Xavier Hotier, U.S. President of Swiss Ulysse Nardin, found his way down there as part of his larger effort to learn about the greater U.S. consumer market, as well as part of his exploration of the brand’s history. You see, Ulysse Nardin once produced marine chronometers for the U.S. Navy and currently enjoys a close relationship with this military branch in Annapolis. Mr. Hotier heard about a charity organization that was using a form of surfing therapy to help wounded (mostly Navy SEAL) veterans. After seeing what they were about firsthand, he immediately wanted to start working with them. The Ulysse Nardin Diver Deep Dive “One More Wave” watch was designed by them in a bar. Big hint: Navy SEALs like “all black.” 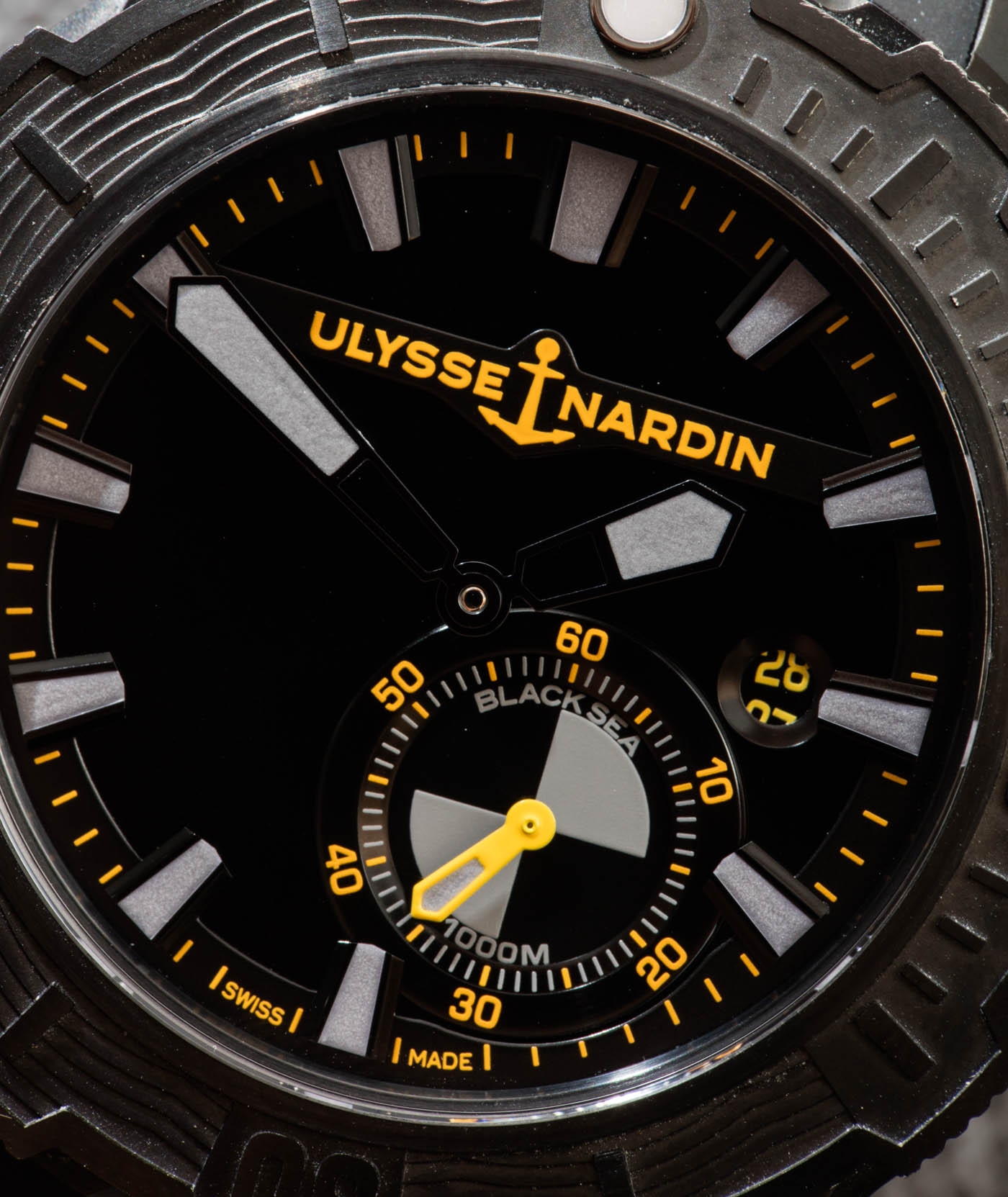 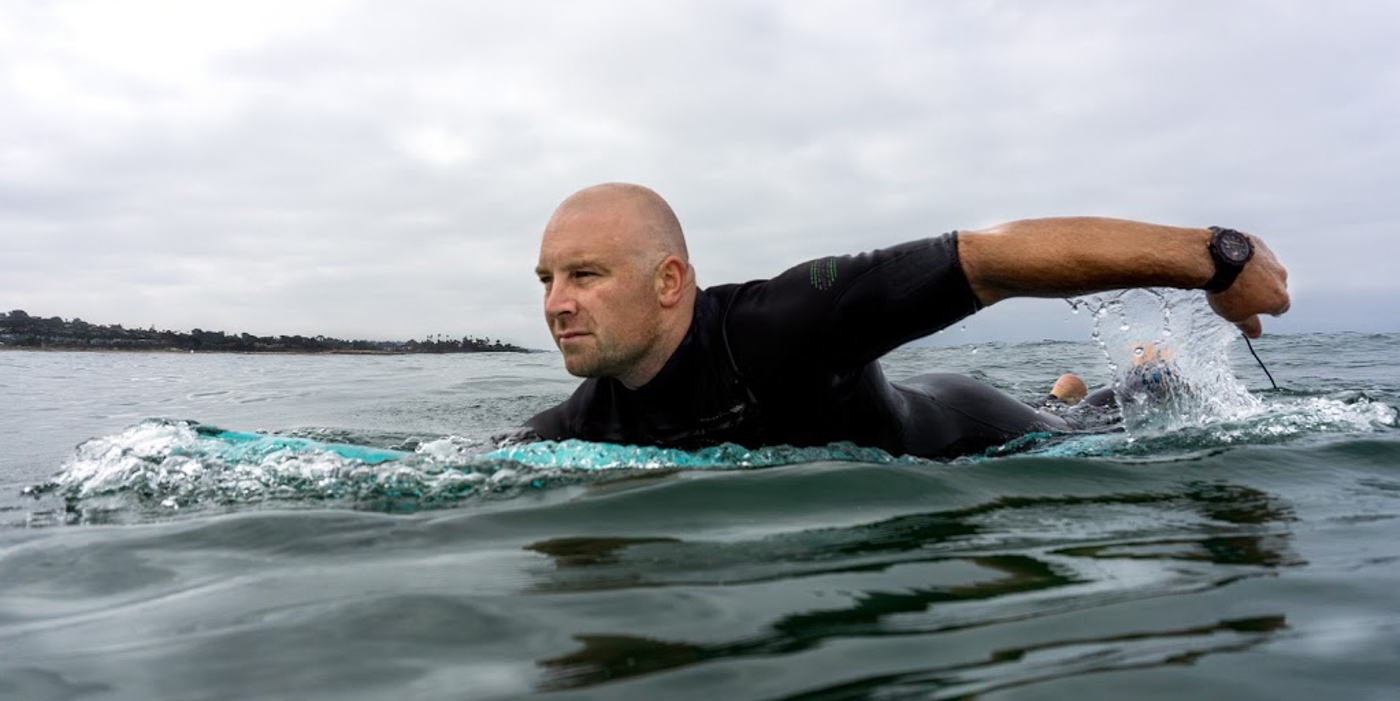 One More Wave is the special, rare type of charitable organization that is able to make a big impact on the lives it touches. The basic idea is simple. Navy veterans who have experienced serious forms of injuries that affect their ability to reintegrate into society are given a boost by having a custom-made surfboard (often with special handles or fixtures for those with partial or missing limbs) and then taught how to surf.

One of the interesting parts of One More Wave is that the graphic design of the surfboards themselves is part of the therapy. The custom surfboards take time to make, and a lot of the charity’s money goes to their production. One More Wave has demonstrated a lot of success in vastly increasing morale and coping mechanisms among seriously injured veterans who returned to Southern California. 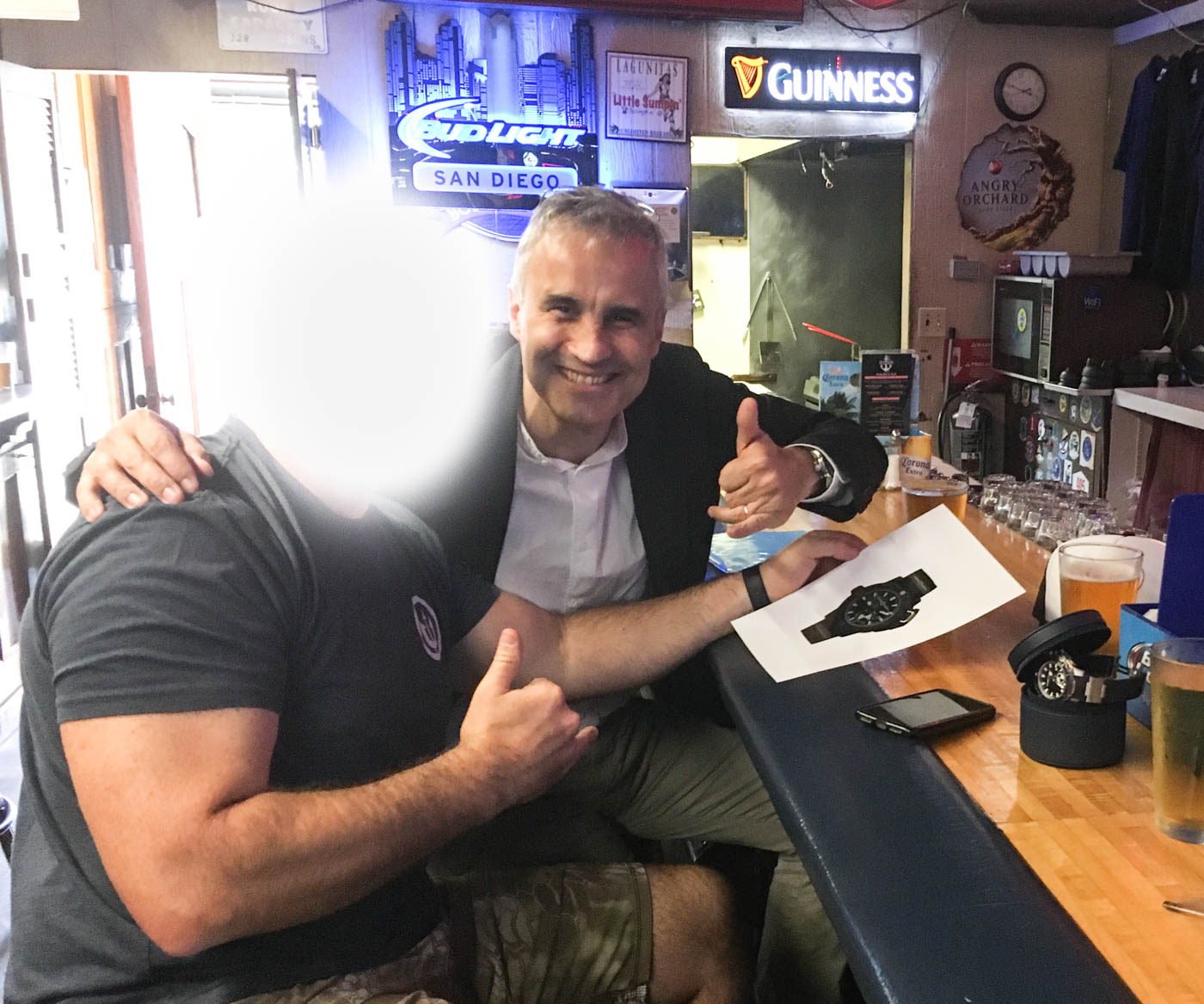 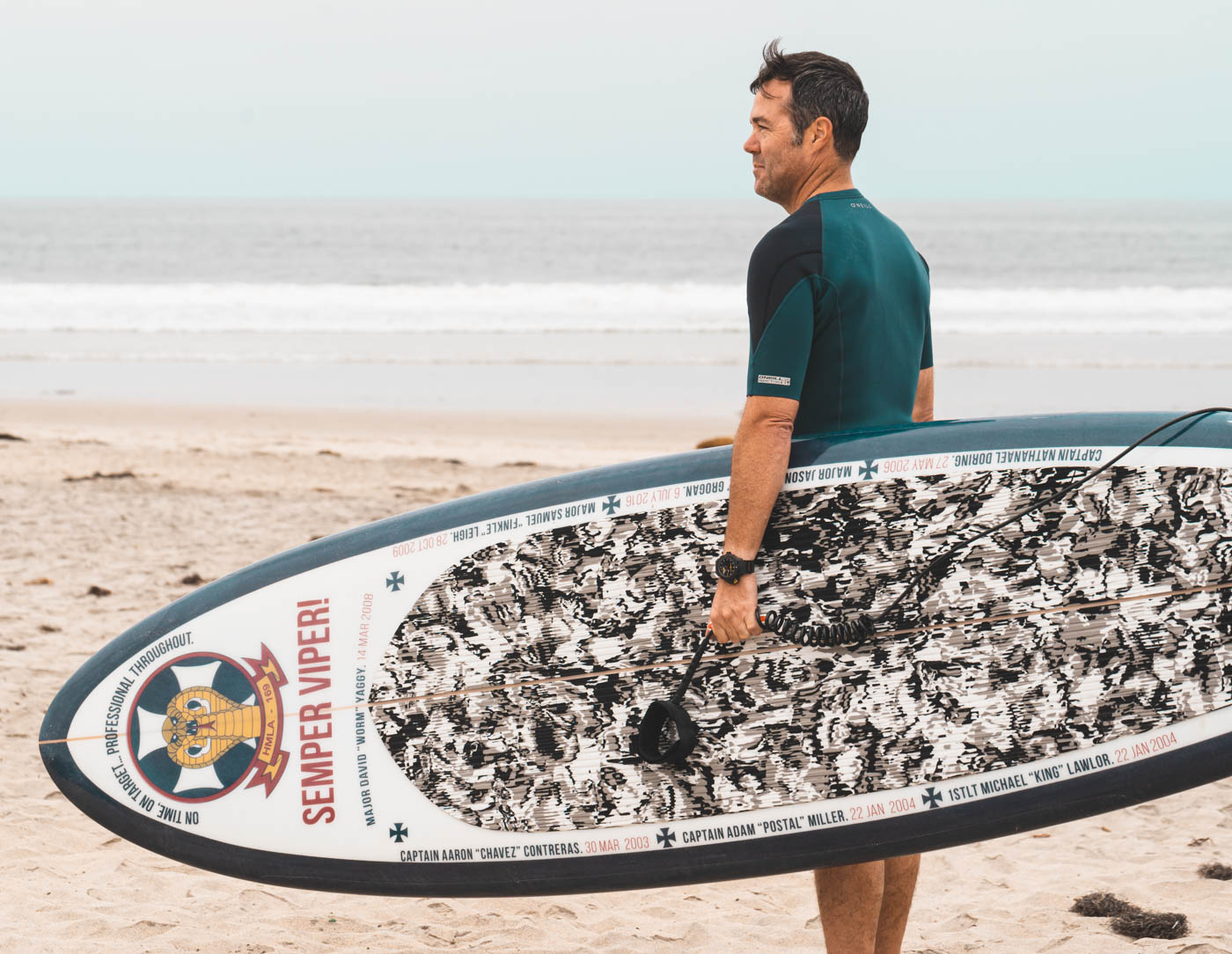 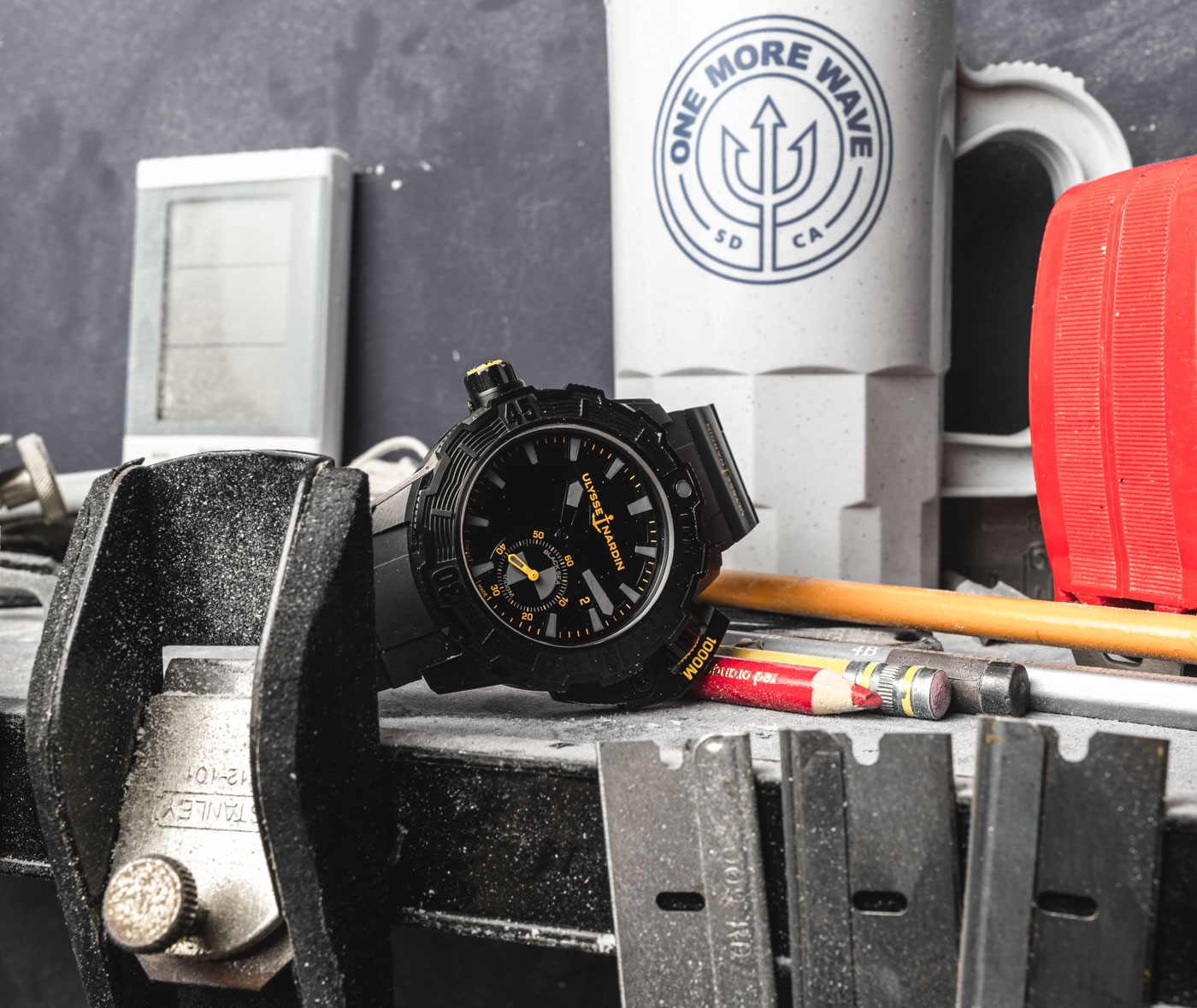 The Diver Deep Dive (I know, it doesn’t really need to have “dive” in the name twice) “One More Wave” is based on the existing Ulysse Nardin Diver Deep Dive watch (aBlogtoWatch hands-on here). I happen to really like this yellow and black version all the more. According to Ulysse Nardin, the watch needed to be all black and celebrates this with a mostly black design that is accented with gray-colored luminant and a “emergency” yellow tone. The look is very distinctive, especially in person. Watch trivia fans will enjoy learning that Ulysse Nardin and the SEALs went back and forth a few times on the colors accents – with tones such as green, blue, and red eventually being rejected before the teams settled on yellow.

The Diver Deep Dive is a strangish watch with a lot of personality. I liken the appeal to something like that of the Omega Ploprof. Neither are pretty, per se, but they have a sort of “built for purpose” look, which is nice if you are into tools. I do not, however, have a final thought on the fold-out crown guard over the crown at 2 o’clock. I’m not sure if it really adds any security so much as it is designed to make you think of various instruments that have safety caps on particular switches. According to Ulysse Nardin the crown guard cap is design to help users know the crown is entirely screwed down – as it does not close with a satisfying click until the crown on this 1000 meter diver is entirely secure. 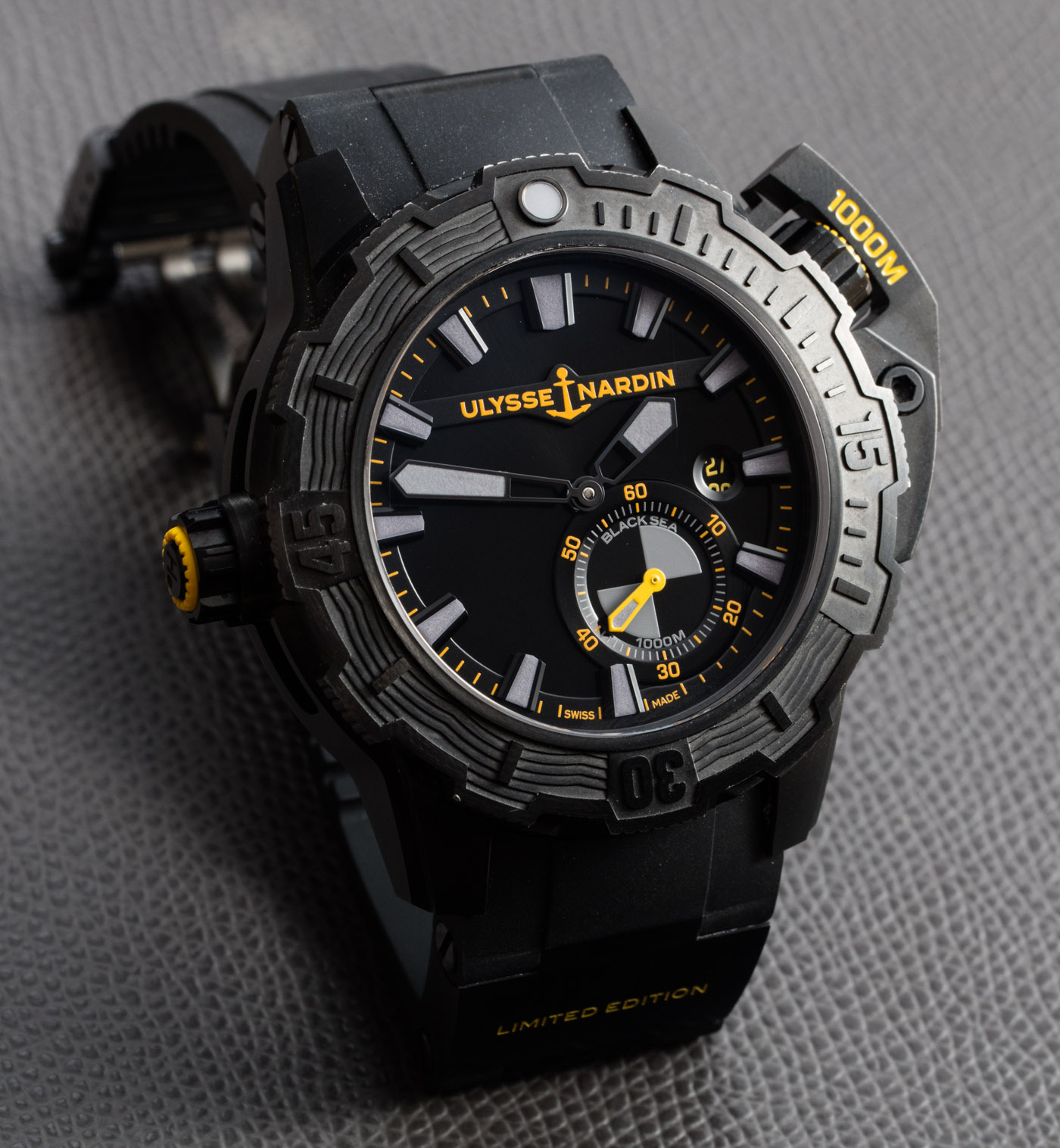 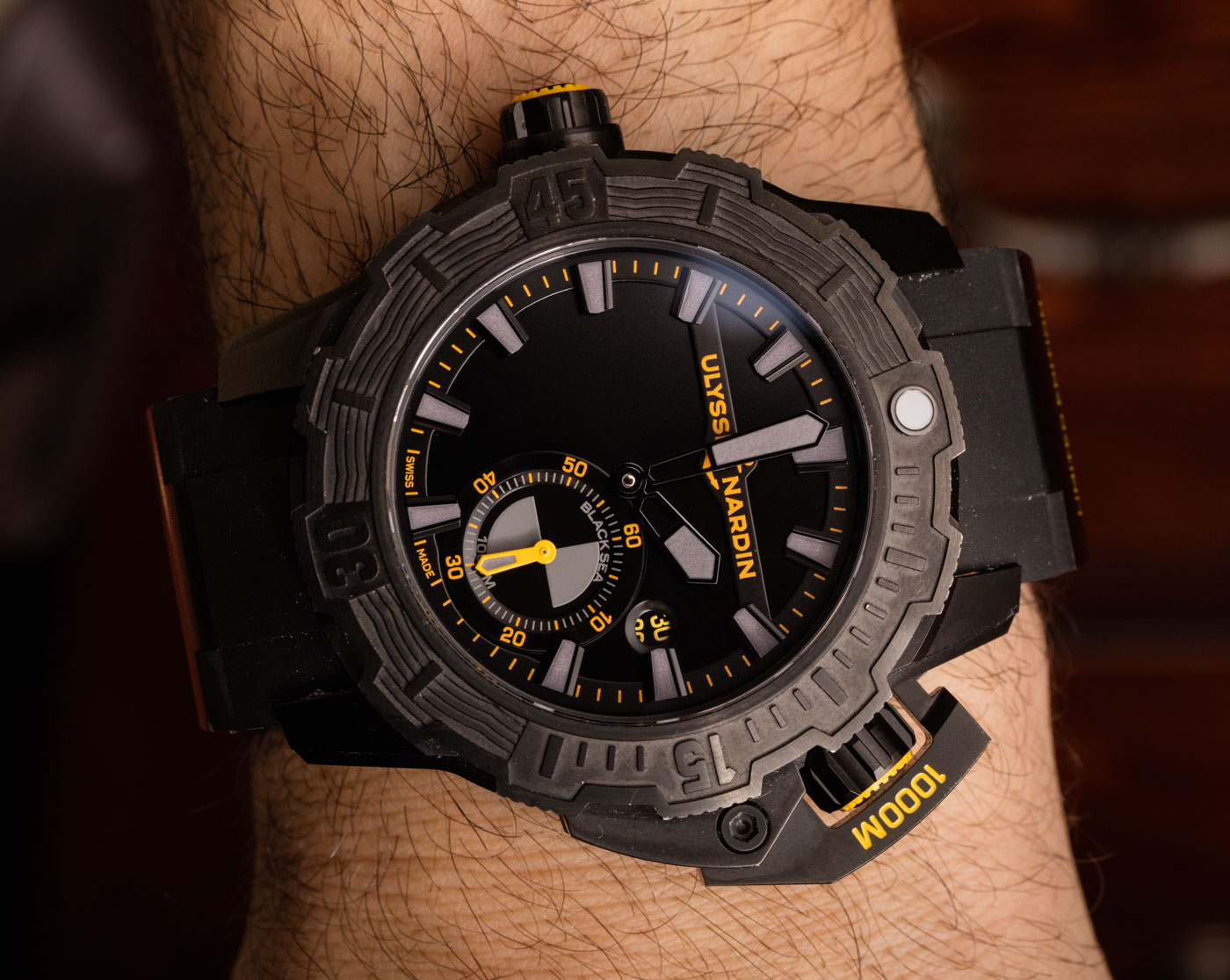 The case is big at 46mm-wide but not too heavy, being in black DLC-coated titanium. As a dive watch, it has 1000 meters of water resistance and is capped with an AR-coated sapphire crystal. Please note that this particular model is a prototype that has seen some miles so it has a series of cosmetic issues (along with a date wheel that doesn’t quite align) that will not be in any of the actual limited edition pieces.

One of the interesting little touches on the dial is the statement “Black Sea” in the subsidiary seconds dial. The statement doesn’t really refer to anything aside from the fact that the U.S. Navy Seals love black gear, wear black, and are all about stealth in operations. So, the Ulysse Nardin design department put “Black Sea” on the dial — and that seems appropriate enough. 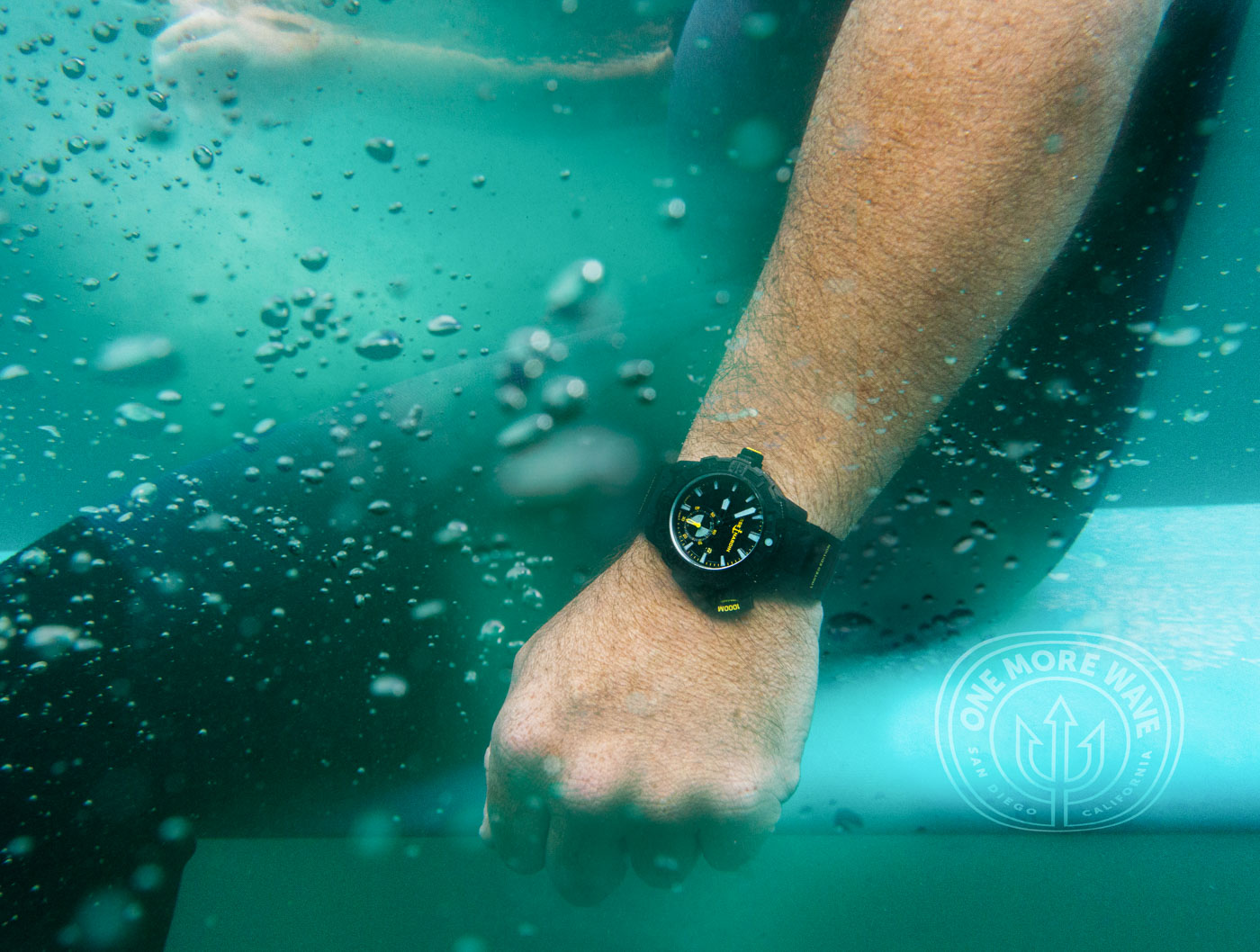 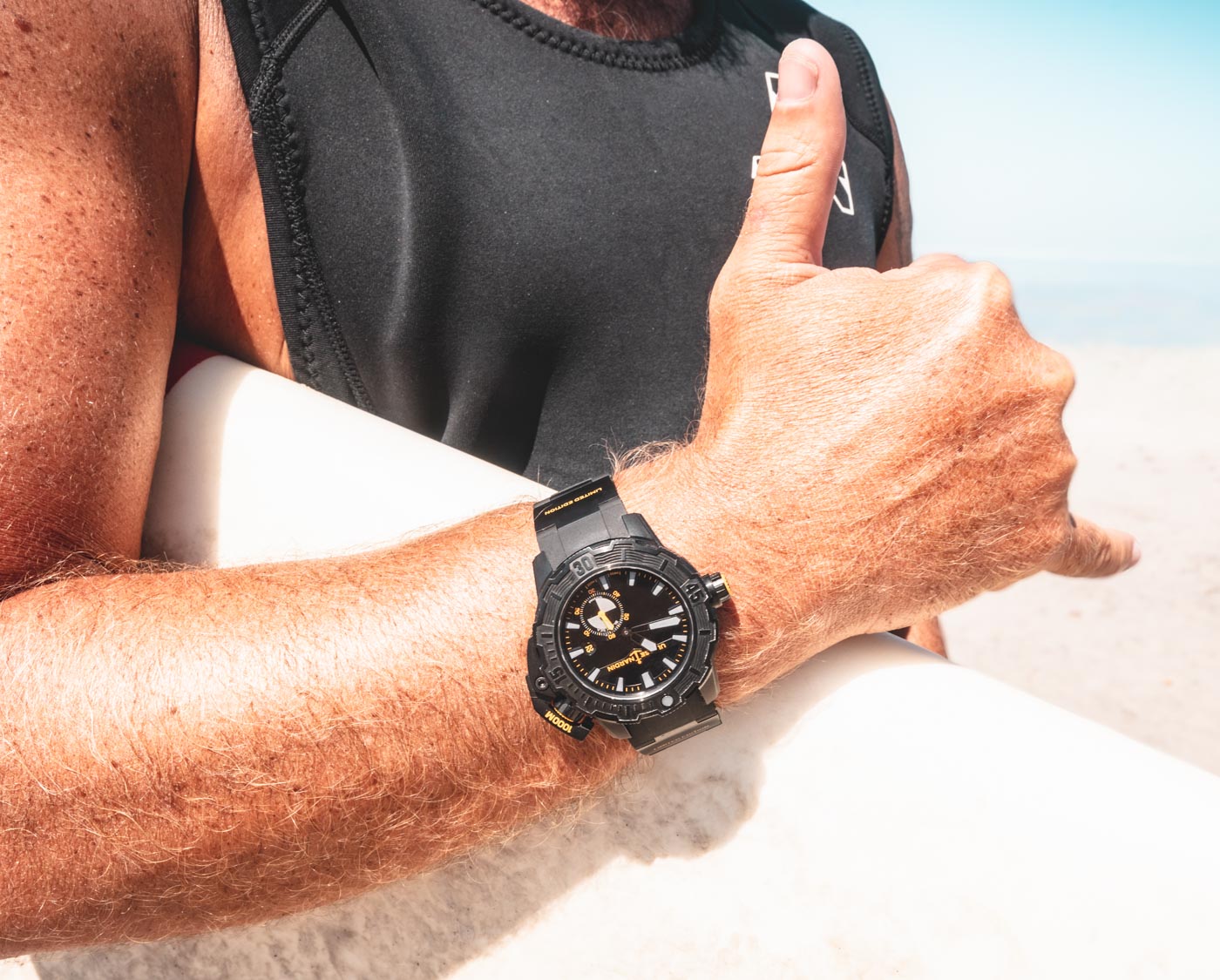 What does grow on you about the quirky Diver Deep Dive is the design of the uni-directional rotating bezel. It is very much a more aggressive version of past Ulysse Nardin Marine Diver watches and helps give the watch a macho feel that goes with the theme. On the left side of the case is another crown that is just a manual helium release valve. This feature isn’t really necessary — though, arguably, if someone other than select commercial divers would need a helium release valve at all, is it probably a Navy SEAL. I do think both the helium release valve crown and the crown itself are a bit too much on the protruding side to be considered practical, as opposed to exaggerated for the purposes of design.

Inside the watch is the in-house-made Ulysse Nardin Caliber UN-320 automatic. Operating at 4Hz with silicon parts and about three days of power reserve, the movement features the time, small seconds, and the date. The subsidiary (small) seconds indicator is well-designed and probably my favorite part of the watch. It is positioned where it is because of how the crown is tilted from 3 o’clock to 2 o’clock on the case. In principle, I don’t mind that, but it does leave the left part of the dial feeling a bit unbalanced as a result. Putting the date window over there would have probably helped promote symmetry on the dial better. 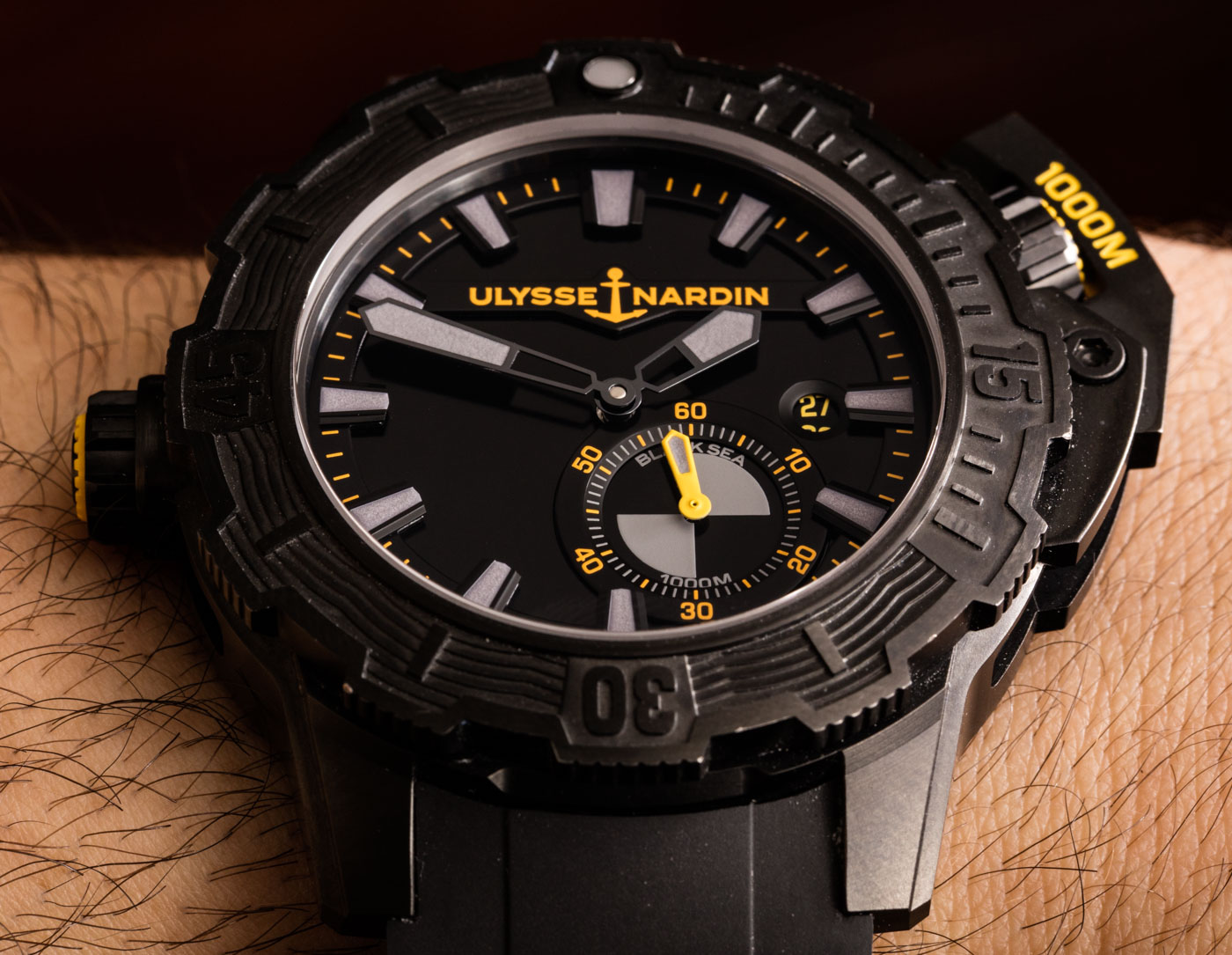 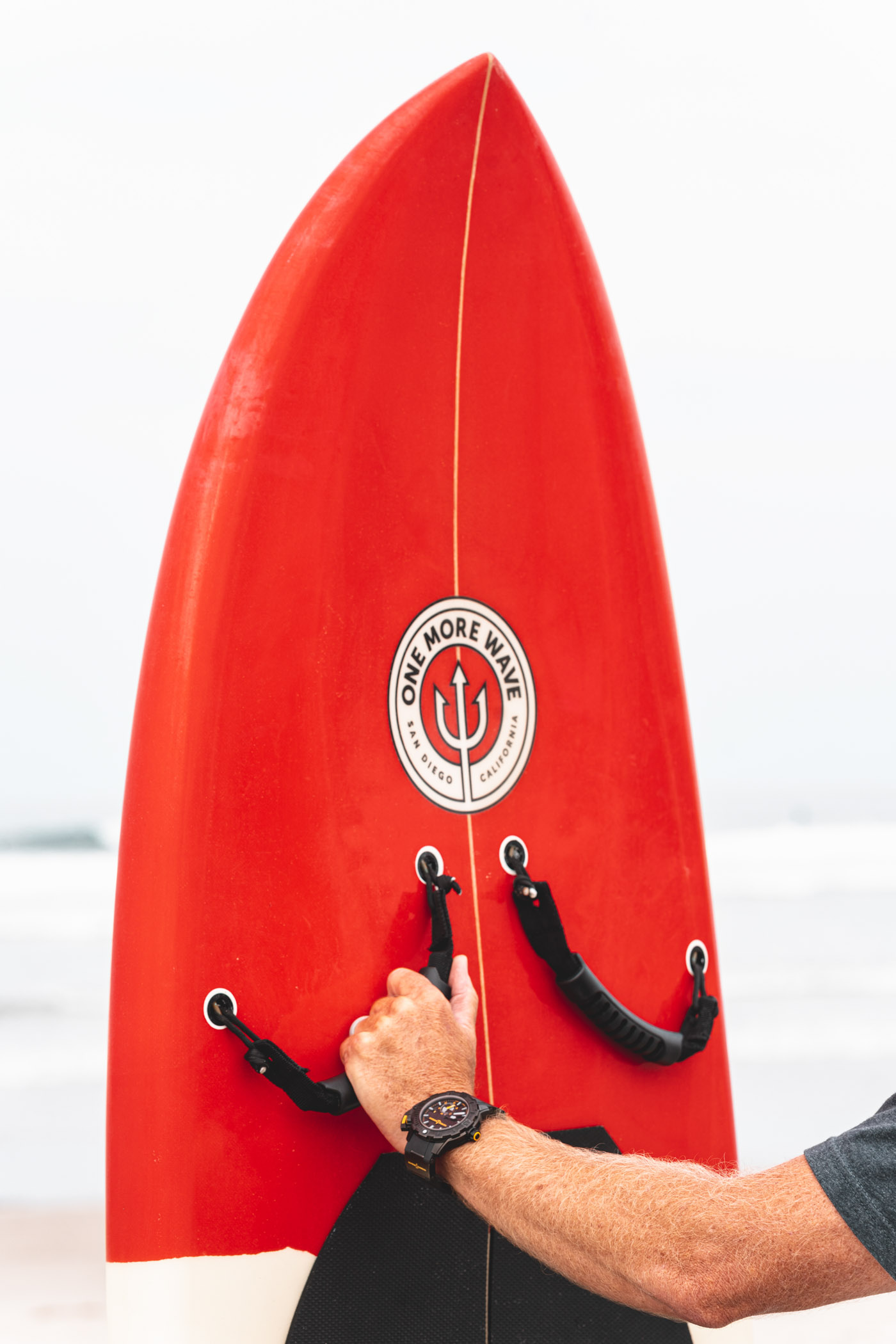 On the rear of the case is a Navy SEALs lucky coin-style caseback with the trident-featuring One More Wave organization logo. Attached to the case is a signature Ulysse Nardin rubber strap that has two titanium segments near the strap and comes on a butterfly-style deployant clasp. The rubber strap does need to be cut to size, but these days, Ulysse Nardin does this type of strap-sizing concept better than most.

Ulysse Nardin intends for the Diver Deep Dive One More Wave to be a U.S.-only watch, which is part of their larger (and effective) strategy to produce local products for local markets. It also demonstrates the company’s larger commitment to honoring the people in the United States armed forces as they relate to the brand’s interests and history. If that continues, we can expect future satisfying collaboration products such as the Diver Deep Dive “One More Wave” from Ulysse Nardin. As the reference 3203-500LE-3/BLACK-OMW, Ulysse Nardin will produce a limited edition set of 100 with a price of $13,500 USD each. Learn more at the Ulysse Nardin website here.