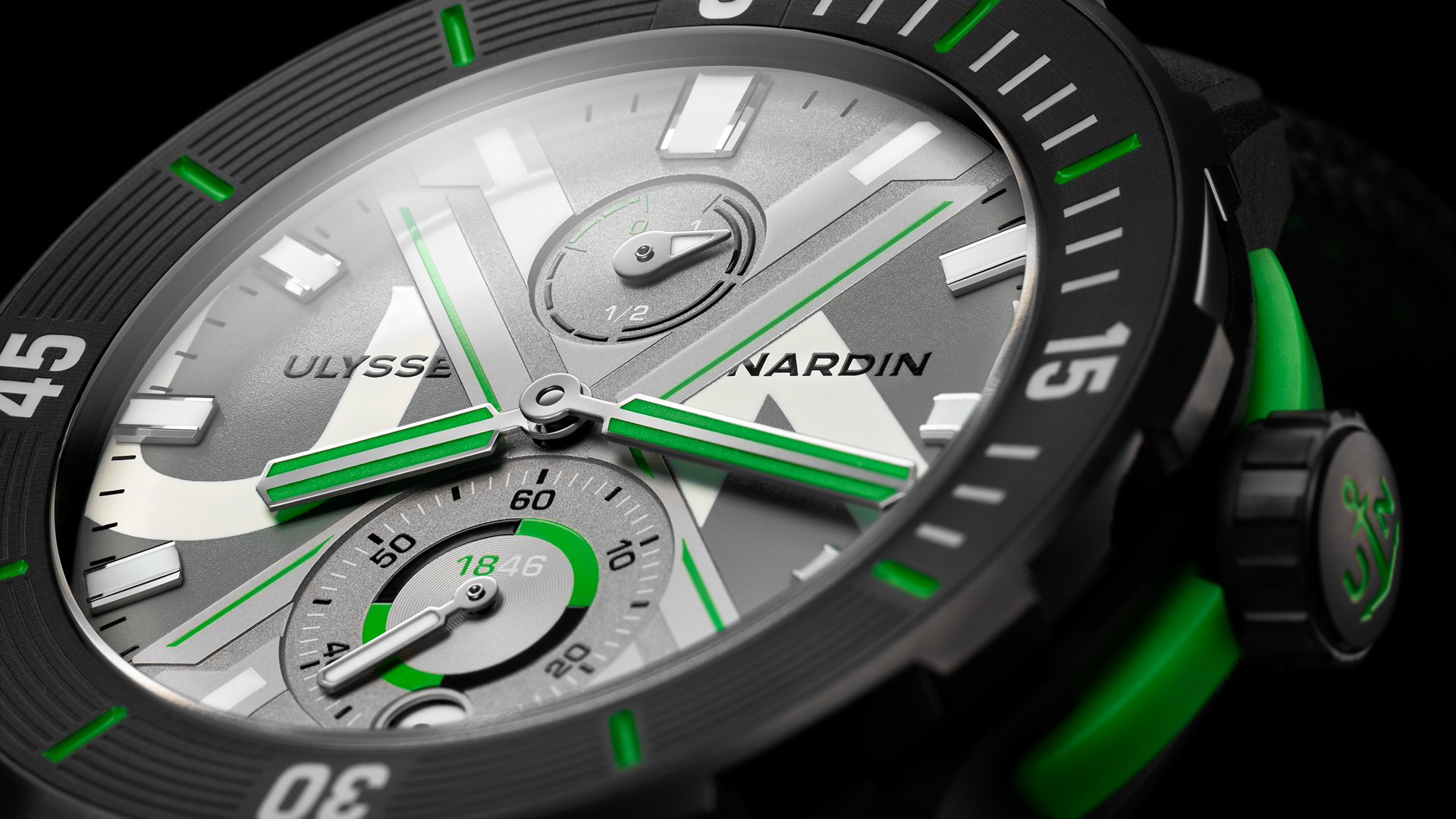 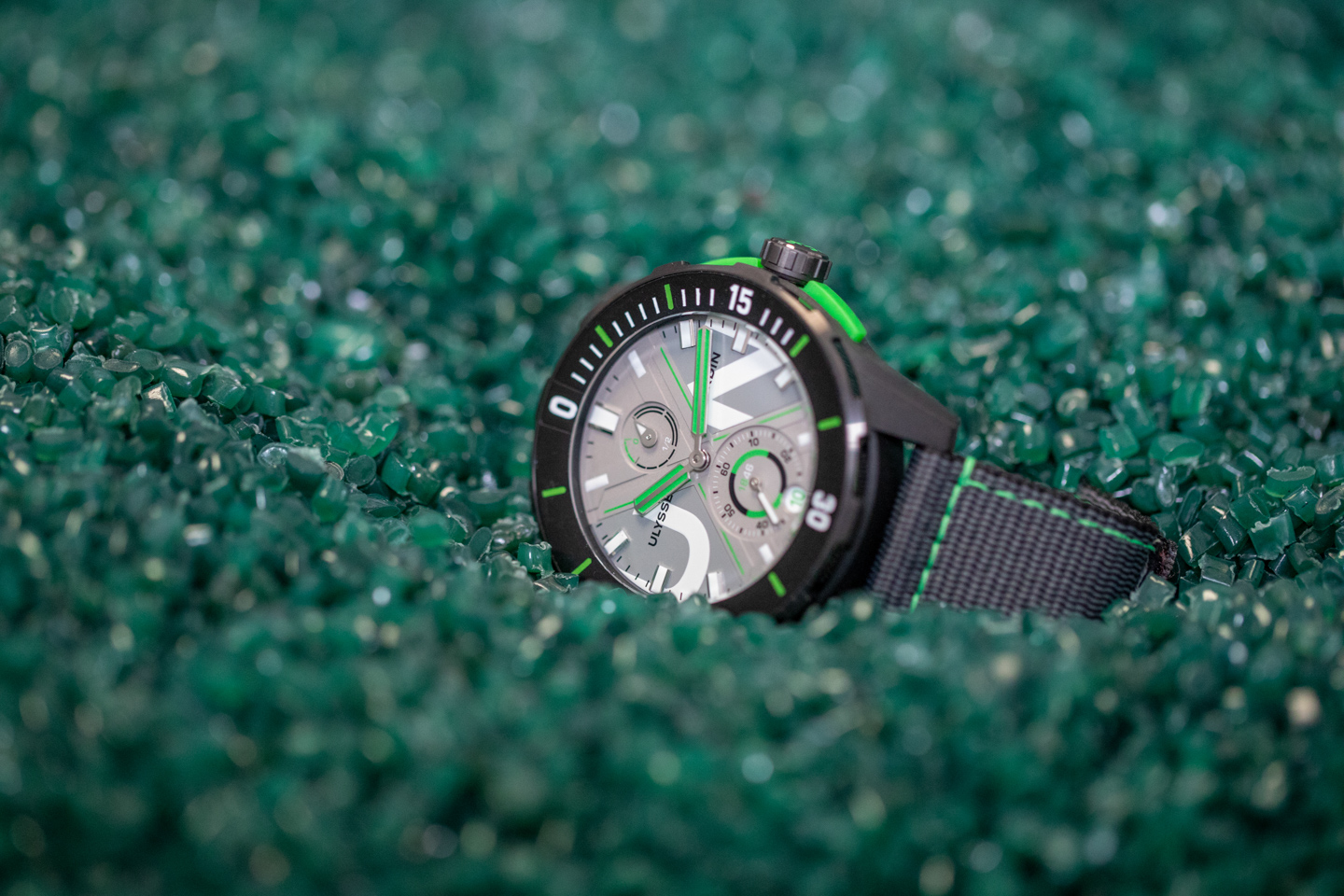 If you’ve watched David Attenborough’s excellent A Life On Our Planet, you’ve already seen the grim timetable — our planet is at a tipping point, and anyone who’s not yet committed to be part of the solution (however great or small) is part of the problem. Ulysse Nardin falls in the former camp with its latest release: a concept watch based on the Diver X with a case entirely made from plastics upcycled from abandoned fishing nets. It’s a veritable drop in the ocean where, by comparison, over ten million combined tons of plastic and fishing nets are dumped or lost annually, disrupting the balance of delicate ecosystems and endangering scores of sea life along the way. But it’s a step in the right direction and a hint at what could be in store for other Ulysse Nardin watches in the future. Luxury watches are, after all, quite sustainable by nature, as they are inherently designed for long-term utility and serviceability, so a project like this closes the loop on creating a fully sustainable life cycle for a single product. Let’s also not forget that Ulysse Nardin is part of the Kering Group, which has pledged to have all of its brands (a portfolio which includes the likes of Gucci, Saint Laurent, Balenciaga, and Girard-Perregaux — just to name a few) and their respective supply chains 100% carbon neutral, with its first goal targeting a 50% reduction in carbon footprint by 2025. 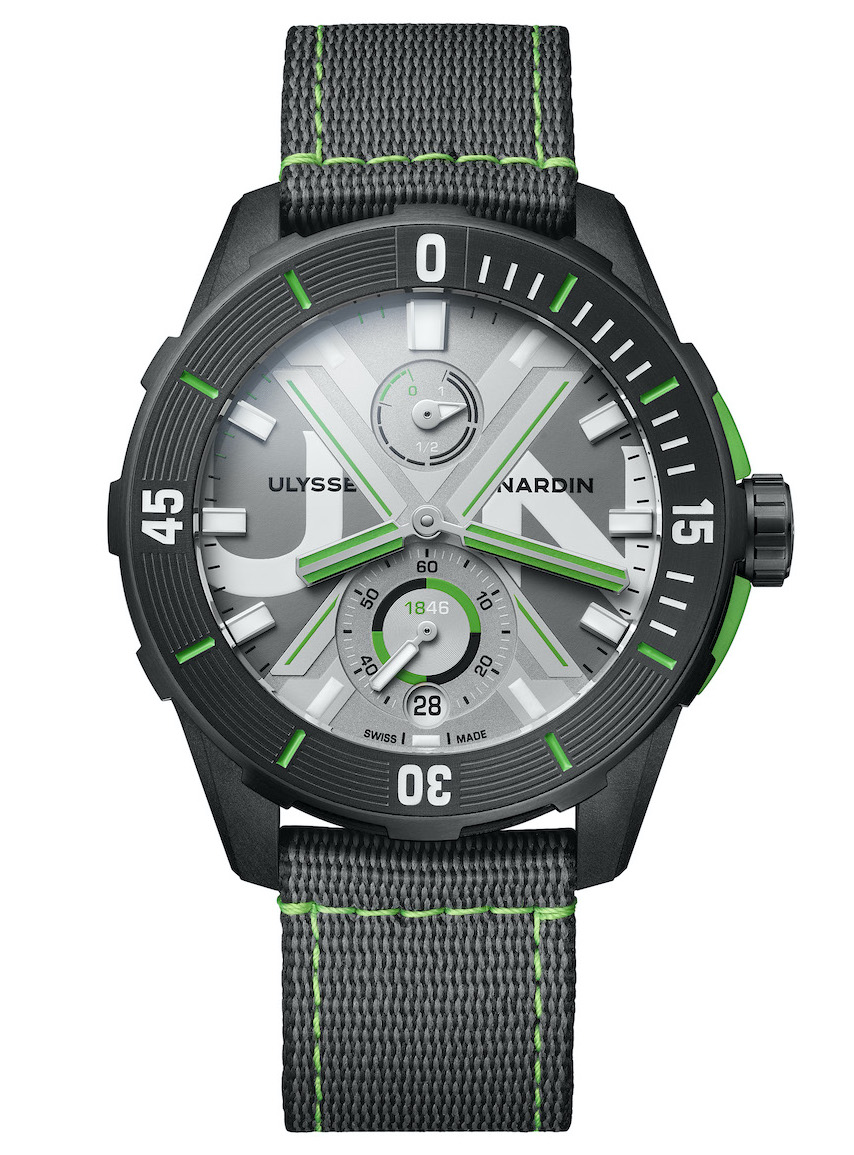 Concept watch or not, the Ulysse Nardin Diver NET, as it’s being called, is not actually the first reference we’ve seen that’s built around a case made with plastic matter reclaimed from the ocean – that honor actually goes to the Seastrong Gyre from Alpina, which made its debut earlier this year. However, the NET appears to be the first truly “luxury” product with premium finishing and an in-house movement to follow this more environmentally conscious blueprint, putting it more in line with Panerai’s “Eco Titanium” Mike Horn reference announced at SIHH in 2019, which was built from titanium that’s been recycled from the aerospace industry. These are all niche references, for sure, but their increasing frequency over the course of the last 12 months is hopefully the signal of the groundswell necessary to start a larger industry-wide trend.

The entire case, caseback, and bezel of the Diver NET have each been fabricated out of polyamide pellets — a highly friction-resistant raw material that is produced from discarded fishing nets. At the helm of this reclamation project is Ulysse Nardin’s partners at FIL&FAB, a young industrial startup, and the first of its kind in France. But the case isn’t the only reductive, conservation-minded element of the NET. Interestingly, the crystal is made from a new kind of transparent ceramic glass, whose manufacturing process requires less energy than the watch industry’s traditional sapphire glass, further reducing the watch’s overall environmental impact. It’s only fitting that Ulysse Nardin would put these kinds of resources towards such an ambition around ocean conservation — after all, the brand cut its teeth on the sea, making marine chronometers for nautical navigation and timekeeping since its earliest days in the 1800s. 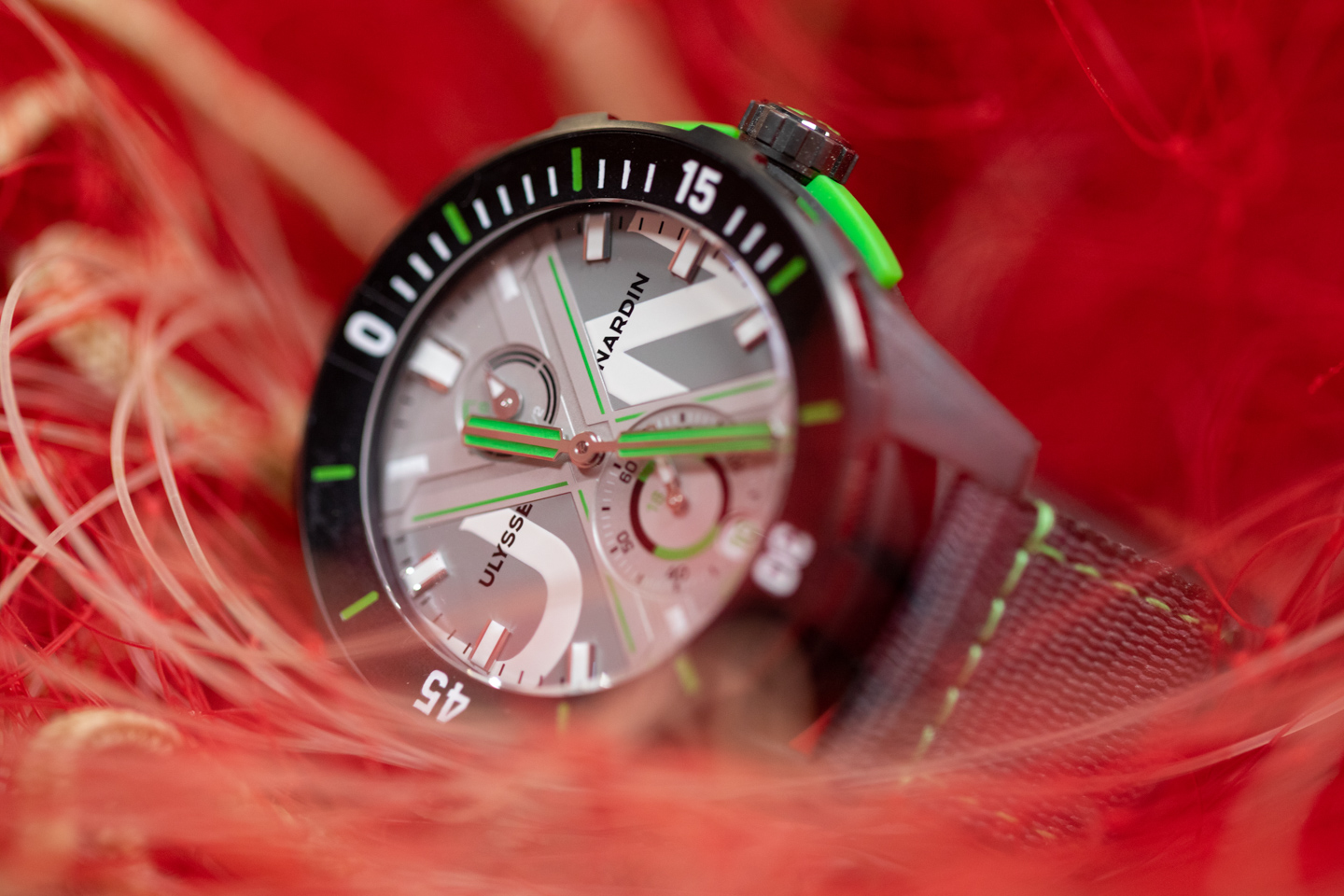 Like the ultra-modern Diver X upon which it is based, the NET bears a series of markedly contemporary flourishes on its dial, most notably the oversized “X” that splits the dial into four quadrants. The oversized “U” and “N” lettering at 9 and 3 o’clock, respectively, might be a bit much, but let’s not forget that this is just a concept product not yet intended for the general market, so the overt branding is likely the result of a specific marketing choice. And also like the Diver X, the NET is powered by Ulysse Nardin’s in-house automatic caliber, the UN-118, which bears a number of unique signatures, including an escapement made from an ultralight and super-hard material called DIAMonSIL, and a silicium hairspring — both elements that aid in the movement’s long-term stability and accuracy. The movement is characterized by a 60-hour power reserve indicator at 12 o’clock on the NET’s dial, and a date indicator that can be uniquely adjusted both forward and backward.

The Diver NET comes fitted on the brand’s new “R-STRAP,” which was announced a few weeks ago — another new nylon strap made from recycled fishing nets (we first saw this done by Breitling back in 2019 for its Outerknown capsule) and is compatible with the rest of the brand’s Diver, Marine, and Freak X watches. The strap for this particular reference exhibits the same hook-and-loop Velcro closure, a recycled plastic keeper, and vibrant green thread that matches the rest of the green elements on the dial. 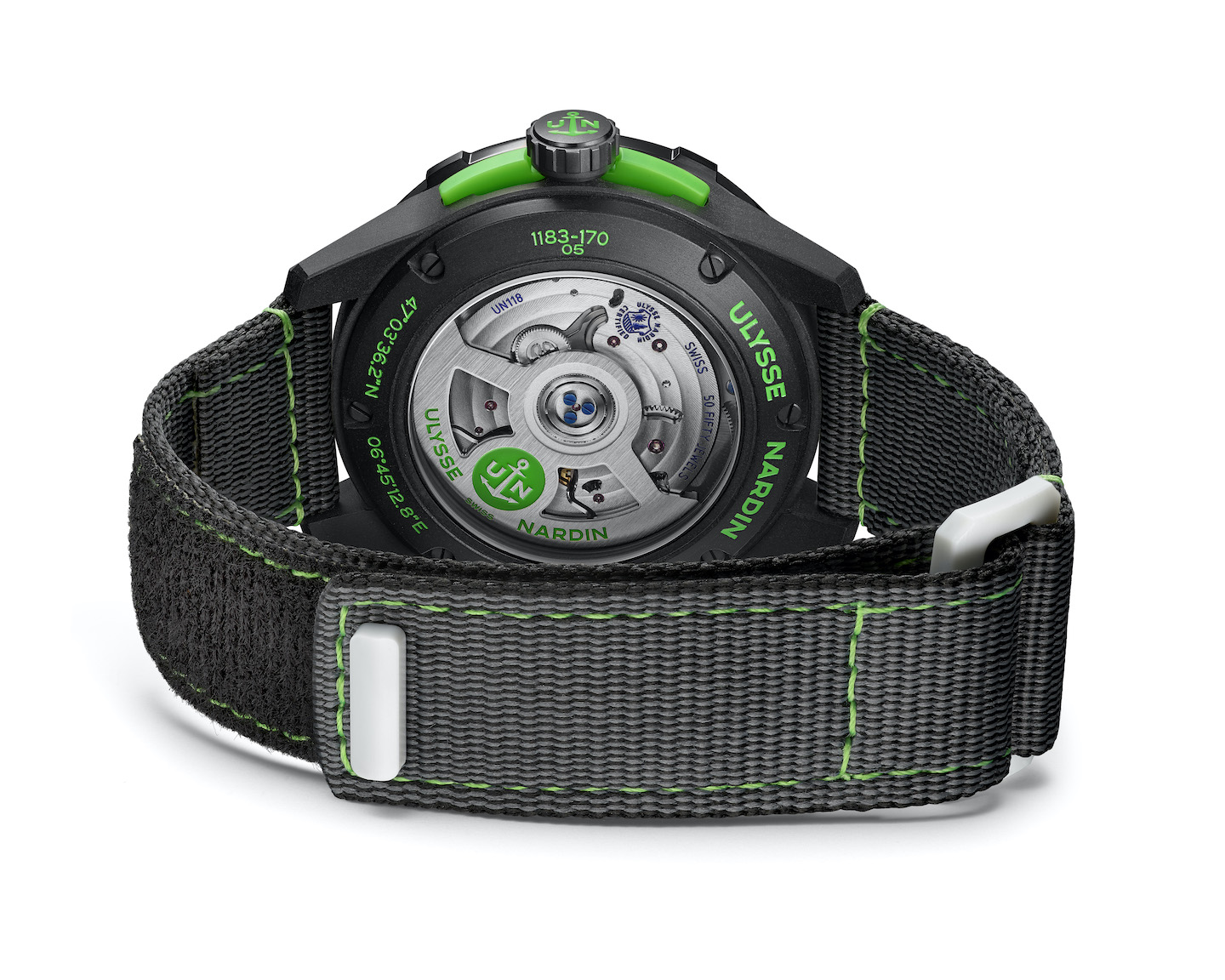 For any brand to be producing products in the shadow of a looming climate crisis,  it’s extremely irresponsible to do so without some environmental plan. And though the Diver NET is, in practice, a concept watch, its existence in the greater context of the Kering Group’s own footprint-reduction pledge certainly hints at what could be in the product road map for future Ulysse Nardin watches. Furthermore, the brand is hard at work researching multiple avenues that involve sustainable innovation for future watchmaking projects, so it’s safe to assume that this is only the beginning. As a concept piece, the NET does not have a price associated with it, though for context, the Diver X platform upon which this reference is based has a starting retail price of $8,900 in titanium. You can learn more about the brand’s dive watches and this project here: ulysse-nardin.com.