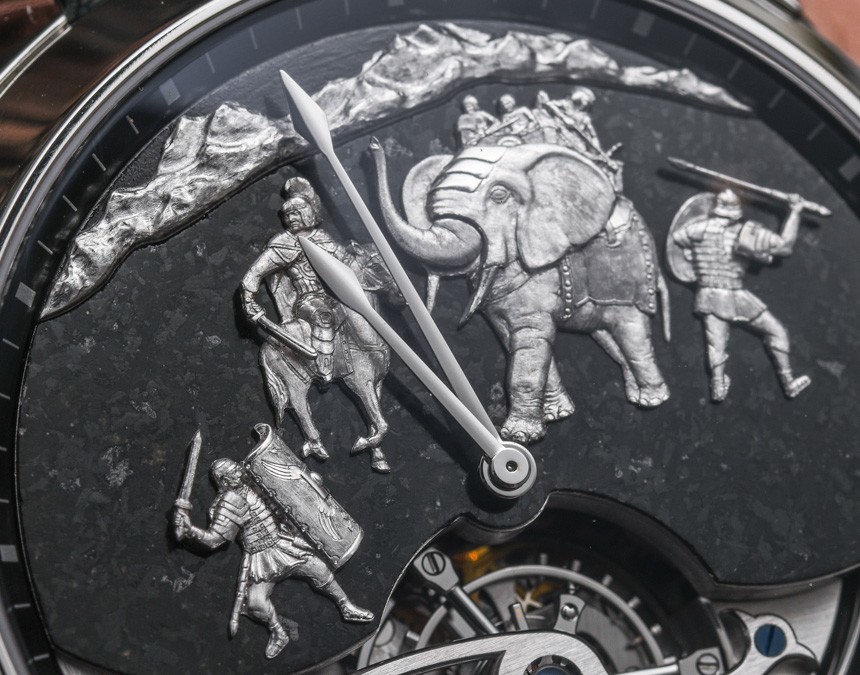 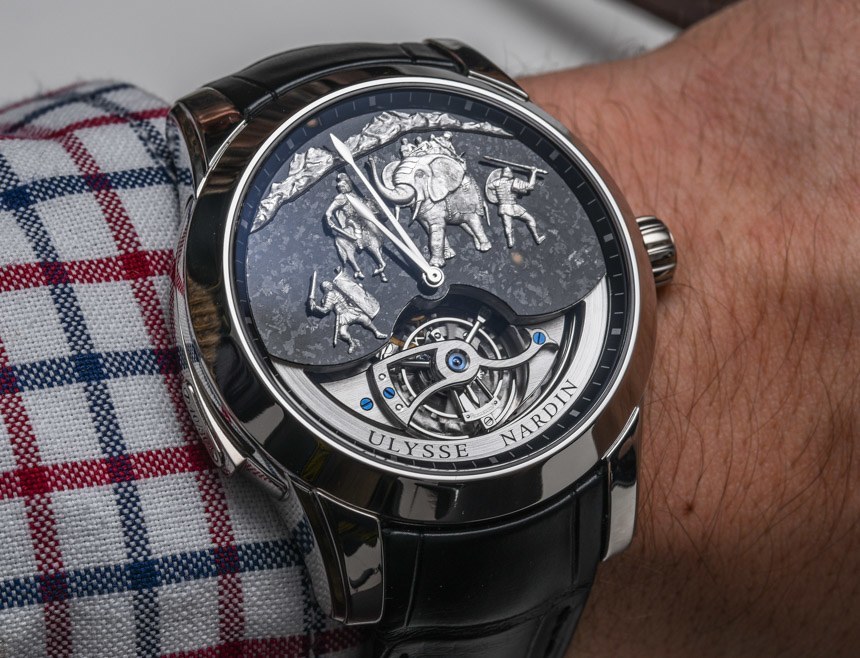 When Sun Tzu wrote The Art of War, it is unlikely he ever imagined the title of his masterpiece being so accurately objectified by a watch, much less a whole range! The Ulysse Nardin Hannibal Minute Repeater Westminster Carillon Jaquemarts is a crazy beautiful depiction of an army journeying to war. It is the latest in a series of Ulysse Nardin’s Exceptional watches to feature a military figure from the past. We’ve already seen Genghis Khan and Alexander the Great, so what is it about blending art and war that seems to strike such a chord with collectors? 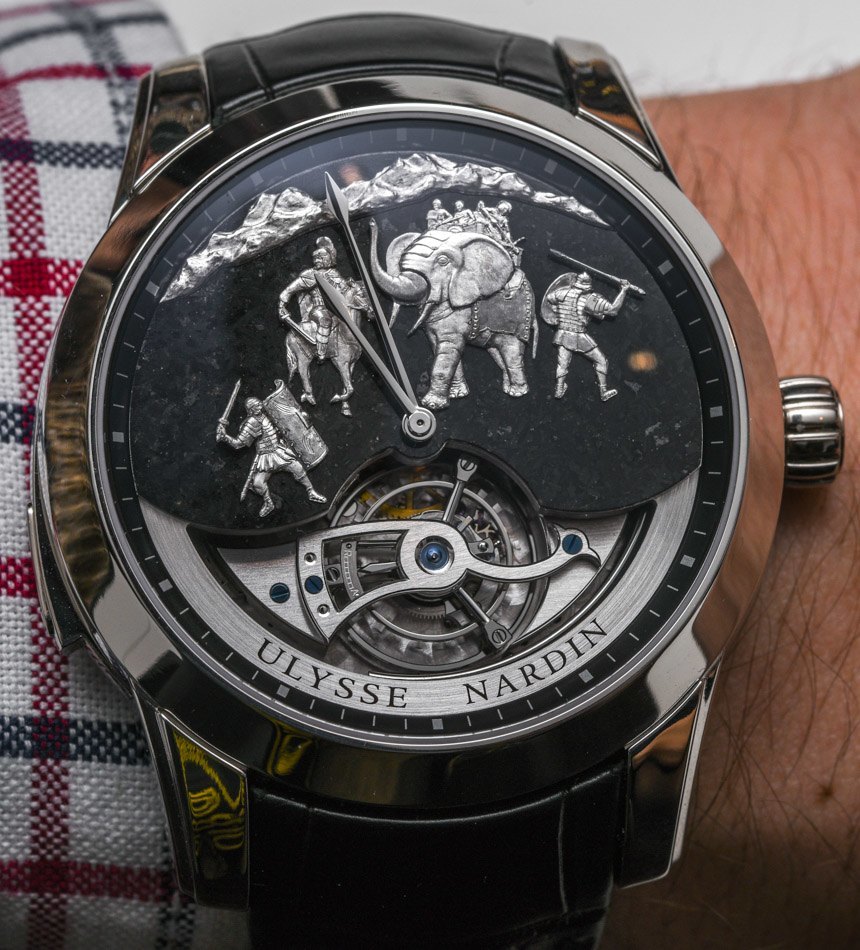 There are some who will no doubt object to the association of “Art” and “War,” choosing to see one as exclusively beautiful and one as inherently horrific. But as uncomfortable as it may be, it is arguable that both can be what we think of the other. It could even be said they are linked on an intrinsic level: in war we fight for life; art helps us understand and appreciate the spoils. 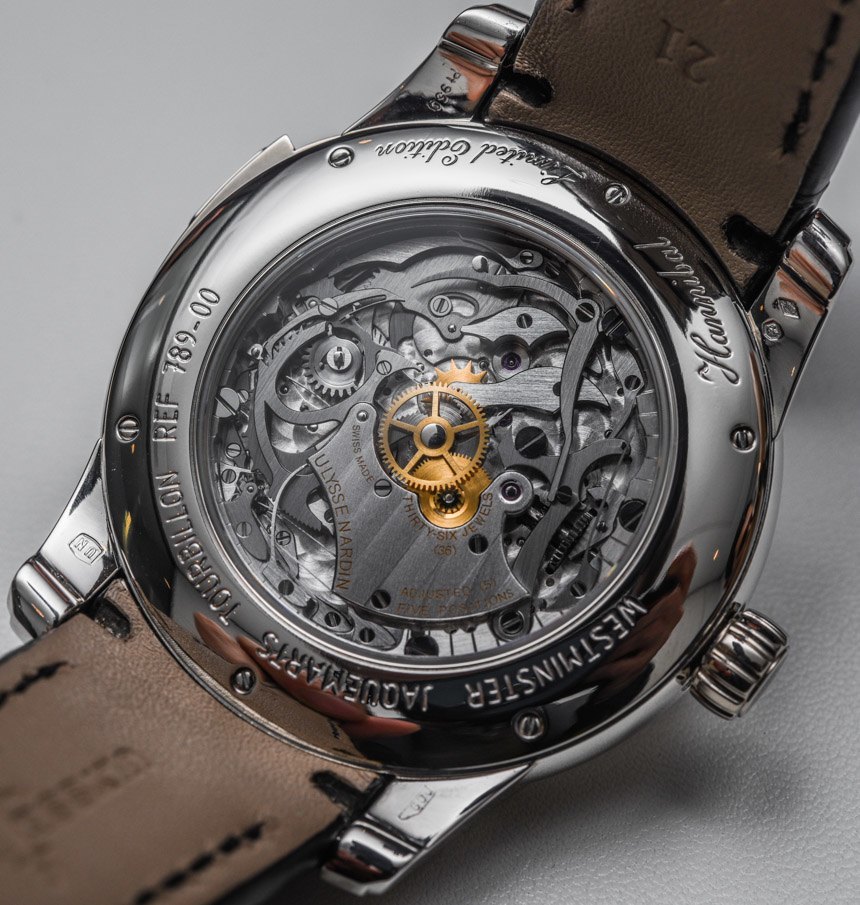 It is the later goal that high-end watchmaking serves. Luxury watches are artefacts of ingenuity and works of art themselves. It seems fitting that a watch should take its aesthetic inspiration from conflict. Ulysse Nardin have done a good job of beautifying a bloody historical character. Hannibal and his men are crafted from white gold and set on a dial of granite sourced from the the very mountain range crossed by Hannibal and his army of elephants en route to his war with Rome. The mountains themselves are realised in white gold, which is the same material from which the moving characters are crafted. 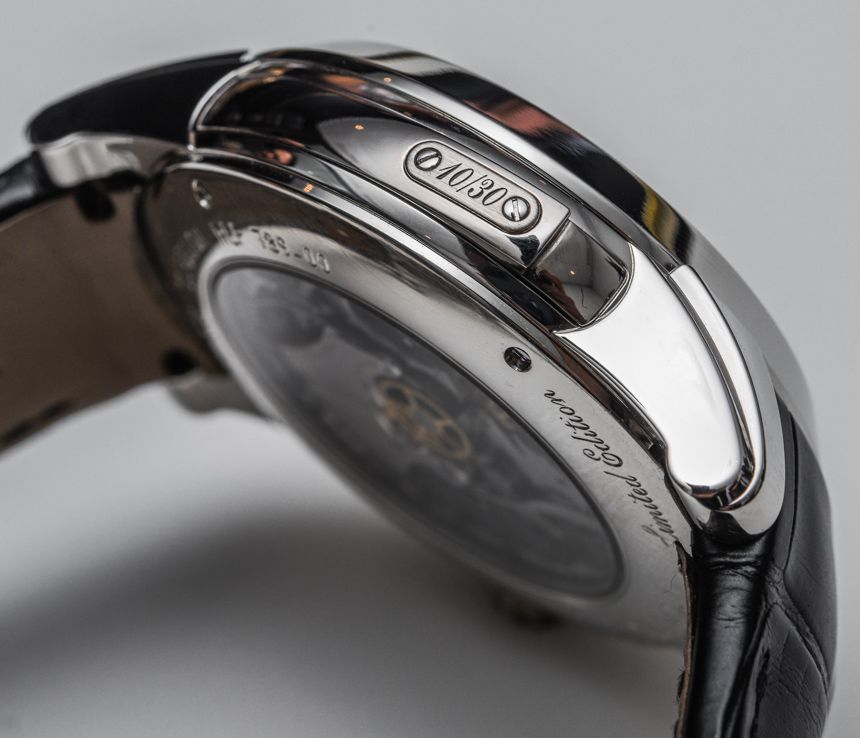 Okay, so bloodshed is never a pretty thing, but this watch uses the concept of war to ask deeper questions of its nature. Because war in art is rarely the same as war in life. War in art can be many things: It can be a celebration of a victory; it could be a sombre documentation of defeat or tragedy; it could be a metaphor for the internal conflicts that rage inside each and every one of us. 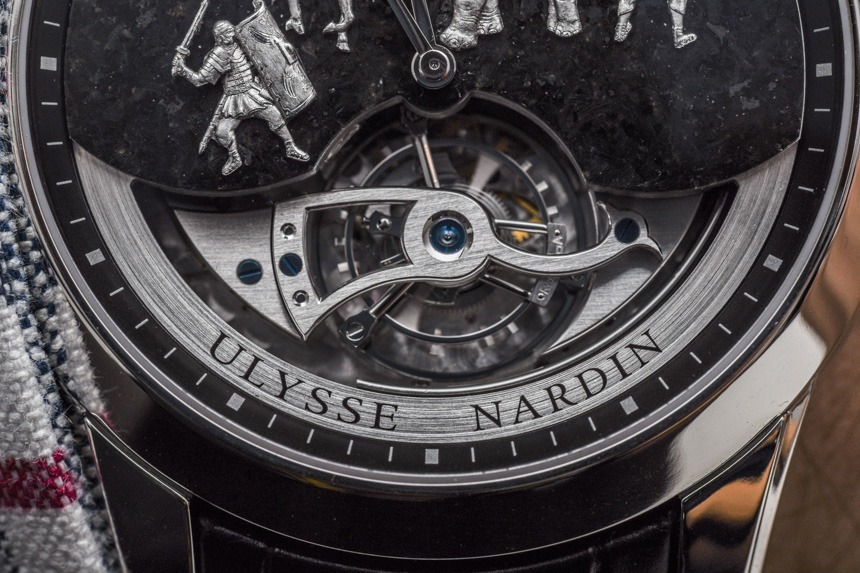 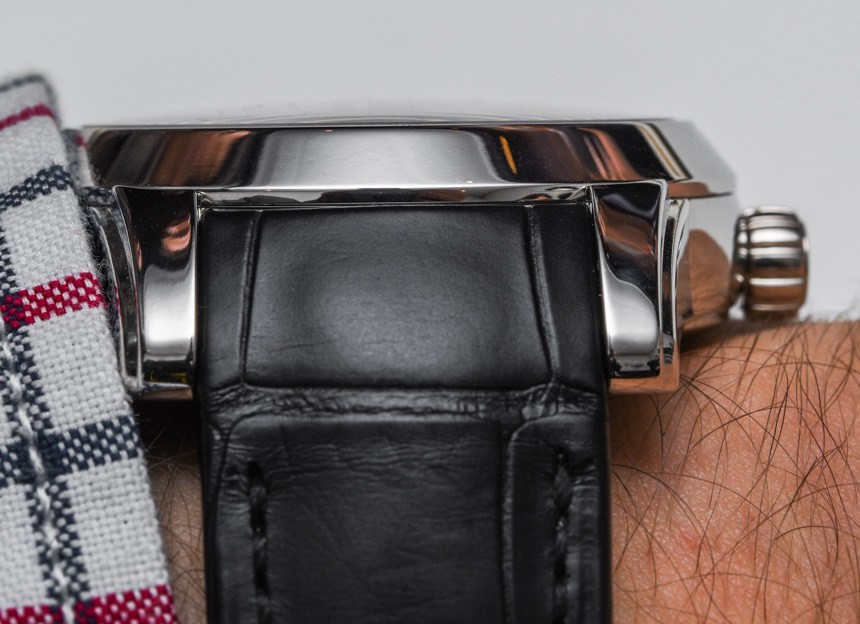 That’s what a luxury watch costing more than half a million dollars is playing on – the way we all kind of get the notion of war, even those of us who couldn’t begin to understand its horror in a literal sense. So emotional relevance out of the way, let’s look at the watch in a purely mechanical sense, because it really is a very nice piece.

The Ulysse Nardin Hannibal Minute Repeater utilises the in-house calibre UN-78 which features a Westminster Carillon and one-minute tourbillon. The manual winding movement has 36 jewels and a power reserve of around 70 hours. It’s housed within a 44mm platinum 950 case that is water resistant to 30m. The tourbillon is proudly presented on the dial at six o’clock, held in place by an elegant, asymmetric bridge that references the early 20th century style popularised by James Pellaton, who developed the aesthetic for Ulysse Nardin. 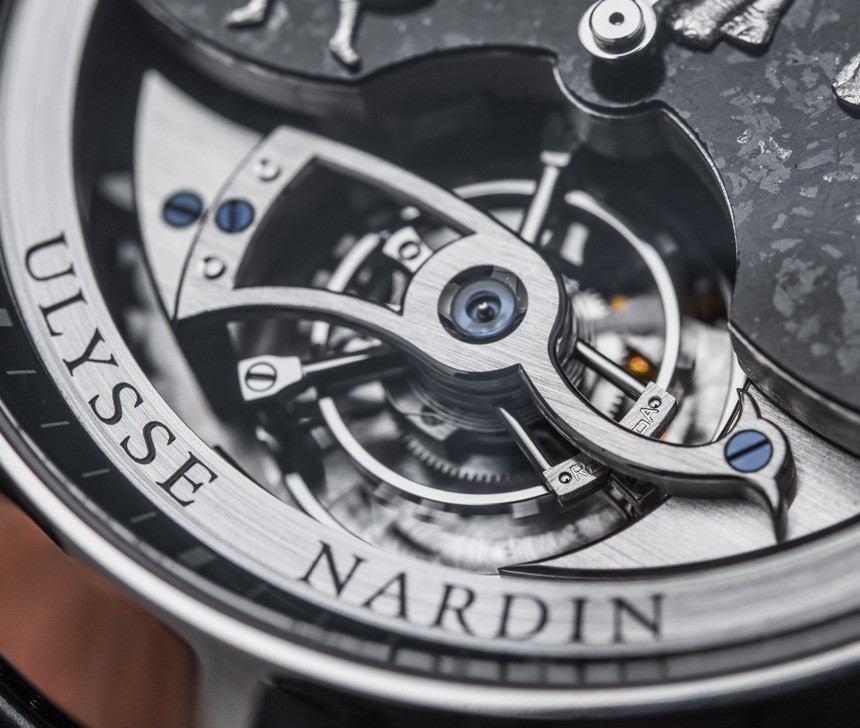 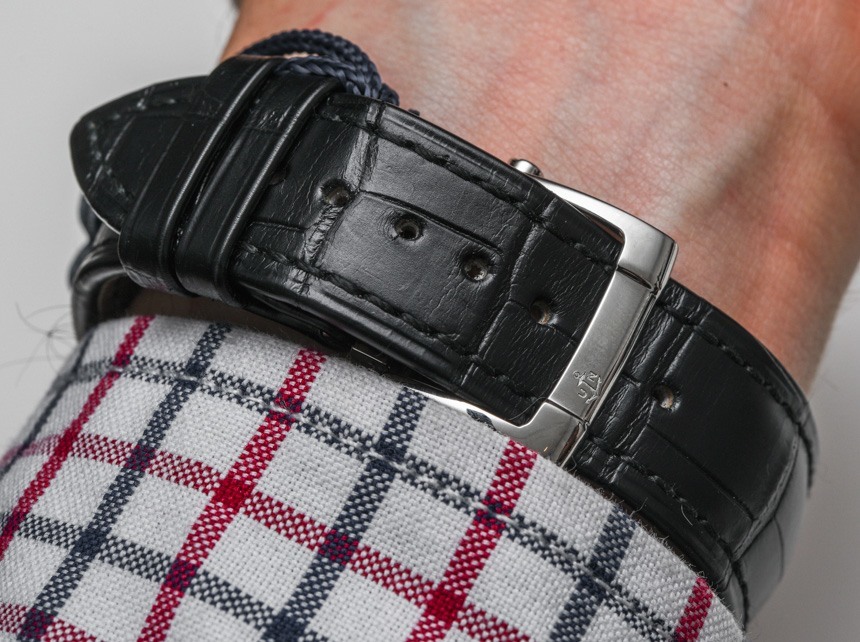 A lot of the aesthetic choices in this watch serve to increase its elegance. It may seem jarring to objectify a historically brutal figure like Hannibal in such a delicate way, but there is a lot of visual fluidity to violence that can be attractive while remaining authentic. The tourbillon bridge, for example, is held in place by two screws on either side of a wave-like triangle. This bridge suggests movement. The case, too, is smooth and polished, not edgy or aggressive. The strap is classic alligator with a simple pin buckle engraved with the Ulysse Nardin logo. Its dynamic styling is visually continuous with the automatons (jaquemarts) on the dial. 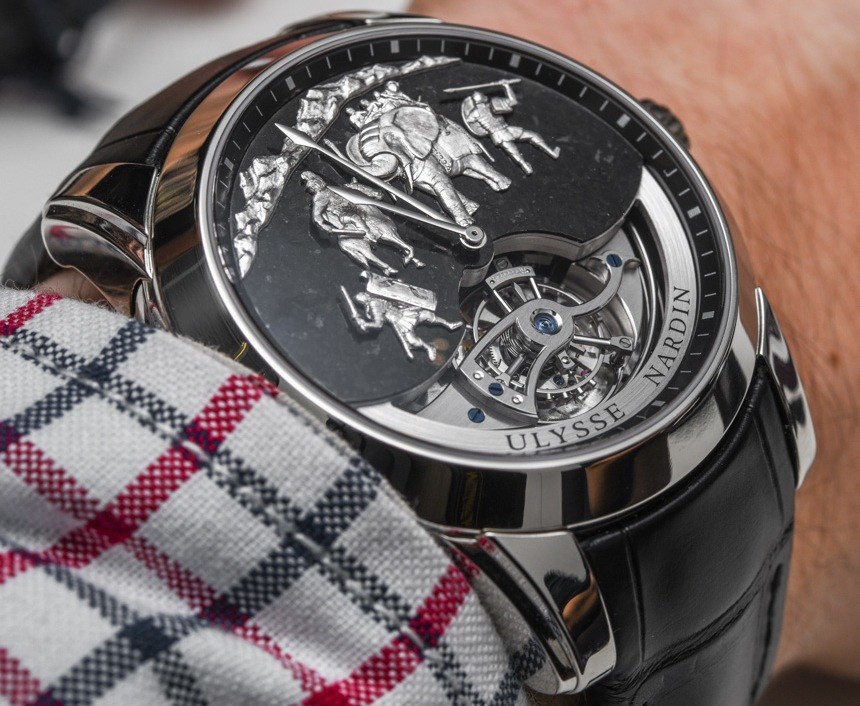 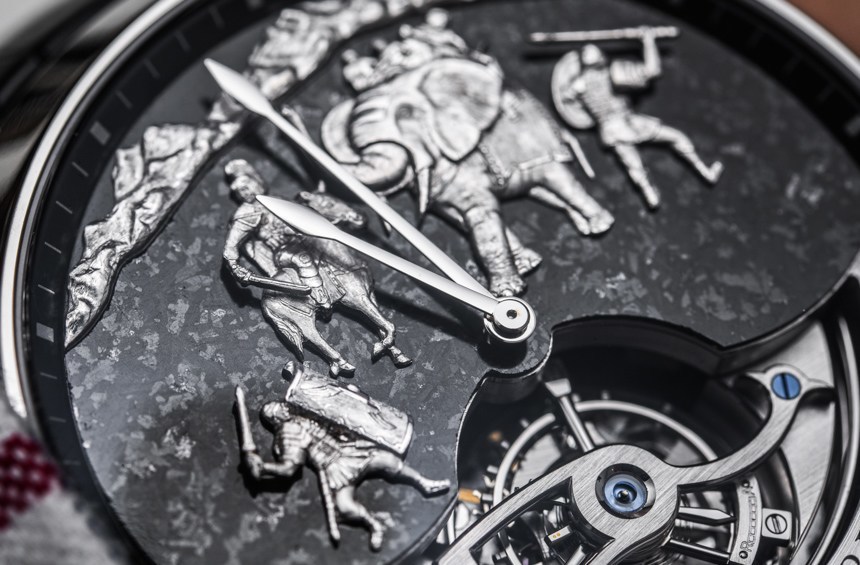 The fighting figures are what really set this watch apart from other sonnerie or tourbillon movements. They are very nicely crafted, utilising yet more trade skills in the creation of this piece. There is little information available regarding the length of time it took Ulysse Nardin to craft each individual figure (a task made harder still by the minuscule moving parts), but if we consider the small statuettes that decorate the dial of the Roger Dubuis Round Table Watch took a whole day to make each, you can bet the labours of Ulysse Nardin were just as long. That along with the excellent level of finish achieved in the calibre UN-78 go some way to justifying the fact that Ulysse Nardin are producing just 30 pieces. 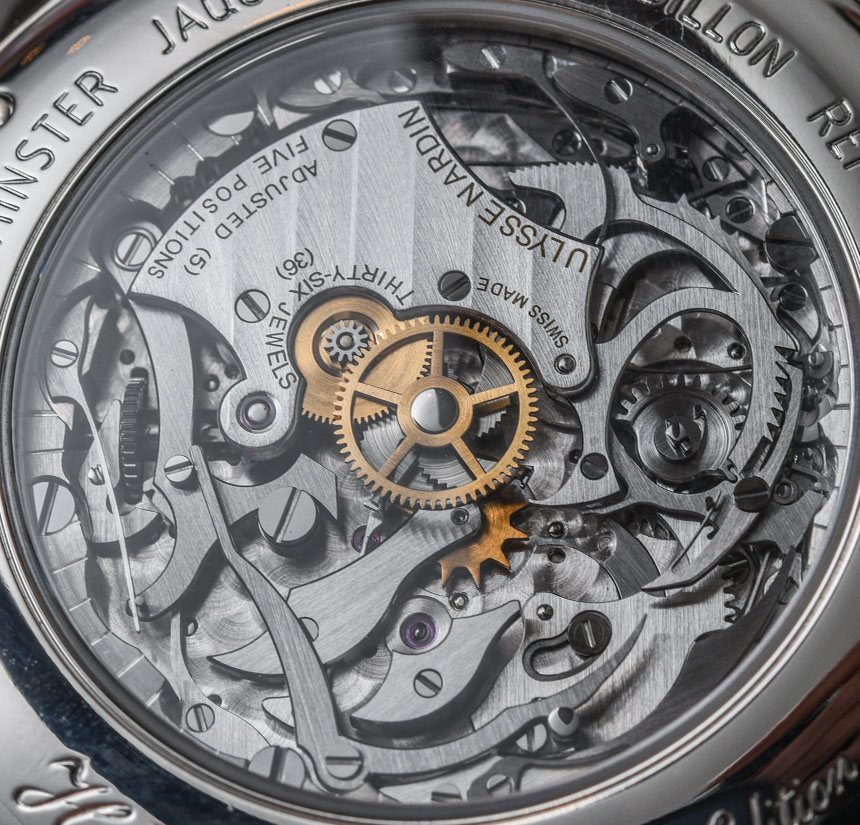 The appearance of the calibre UN-78 is really something special. Displayed through a sapphire case back, it is a wonderfully exposed piece. Thanks to the absence of a rotor weight, the striking mechanism, which has been painstakingly adjusted to produce a pleasing tone, can be seen creeping towards actuation. The tune played by the minute repeater strikes four separate notes: Mi-do-Re-Sol. The sequence changes for every quarter hour sounding. Each gong is “linked” to a moving part of the animated automatons on the dial. Hannibal, sitting astride his horse alongside a faithful elephant, waves his sword hand, while his men (and his pet pachyderm) waggle their appendages in time with the music. 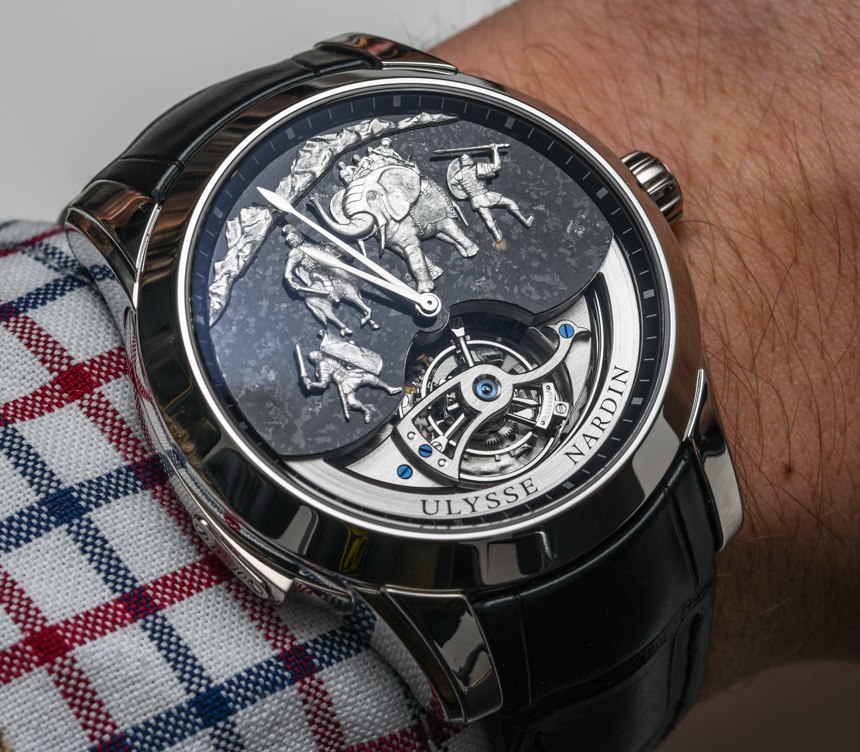 It’s really quite stunning at first sight, but is it a success? The materials are very high-end, the movement is superb, and the function of the watch is clean and intriguing. But is it a wearable piece? Putting the stratospheric price of about $750,000 dollars for the Ulysse Nardin Hannibal Minute Repeater watch aside for one moment, does this watch have a place on your wrist? It’s a delicate curiosity – a work of art – but it is a large chunk of platinum to heft around. I get the feeling that each of these thirty timepieces will be squirrelled away in a safe. Of course, watches like this are not supposed to be practical. It is a very, very expensive toy for adults. The magical motion of the minuscule men-at-arms is an innocent joy, far removed from the violent history of the man the scene depicts. Perhaps that simple pleasure is enough to justify the price tag. If not, perhaps the memory of the men these watches celebrate does. I doubt that we want to emulate the exploits of Alexander the Great, Genghis Khan, or Hannibal Barca, but we can learn from the horrors of war so that the pretty pleasures of peace, like this and all other luxury watches, can be better appreciated for what they are. A real treat. ulysse-nardin.com