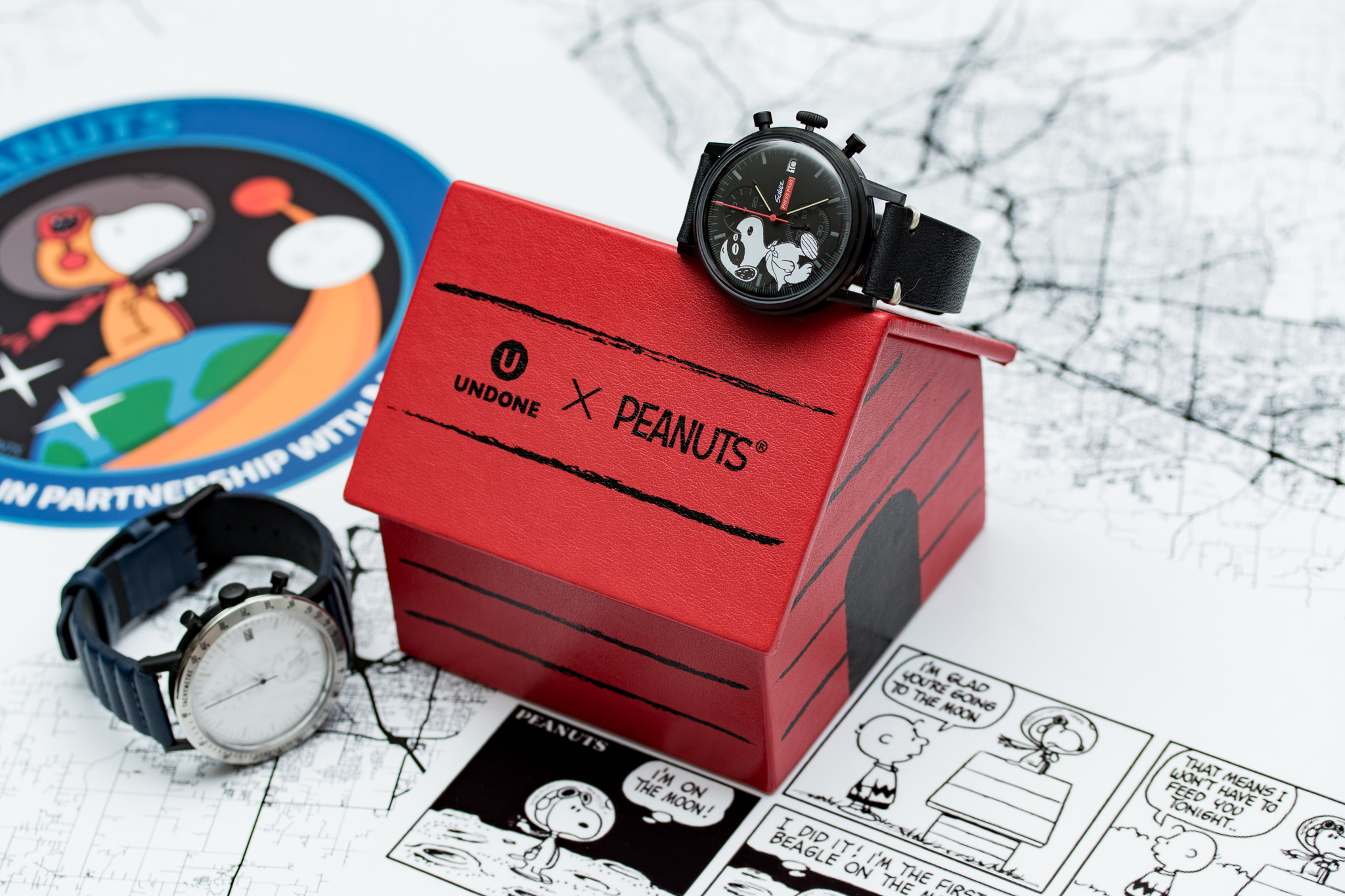 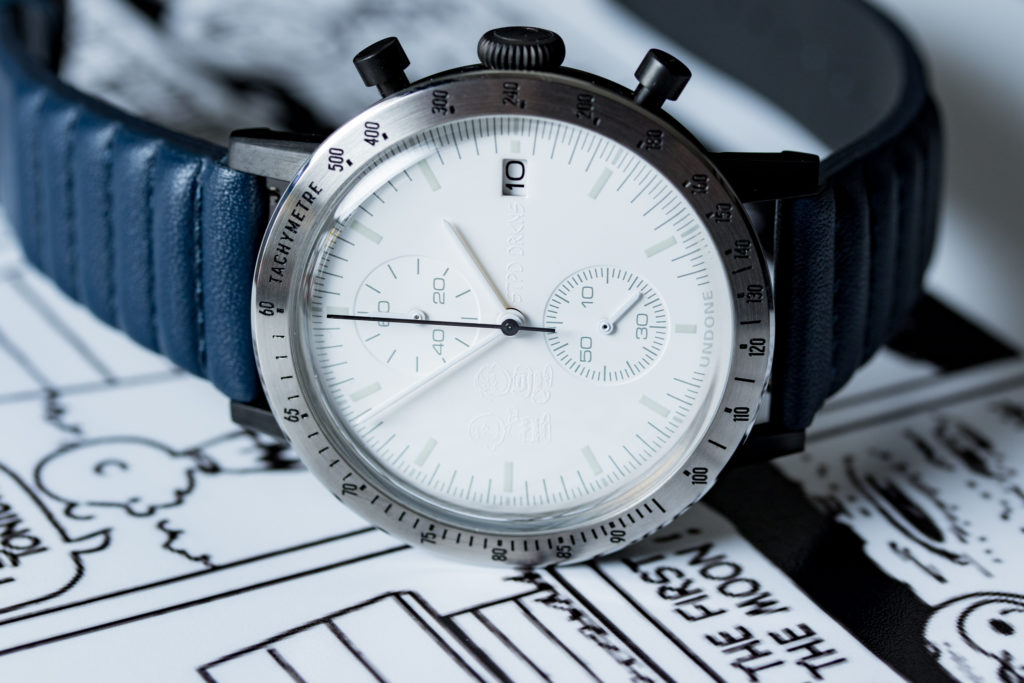 My “Press Edition,” which wasn’t customized by me, is a bezel-less black on black, black lumed watch with Snoopy on the dial as the “Masked Marvel” and lettering that says, “Press Pass.” Snoopy to be on this watch is quite fitting for me as I’m primarily the photographer at many events, and having to be superhuman to get the shot, and having the courage to put yourself out there for the shot, would definitely be embodied by such a character. The strap is a matte textured leather with off-white stitching near the lugs and strap ends. Interestingly, with as bold as the watch looks, it flew under the radar of most peering eyes, paired with a dark grey suit. 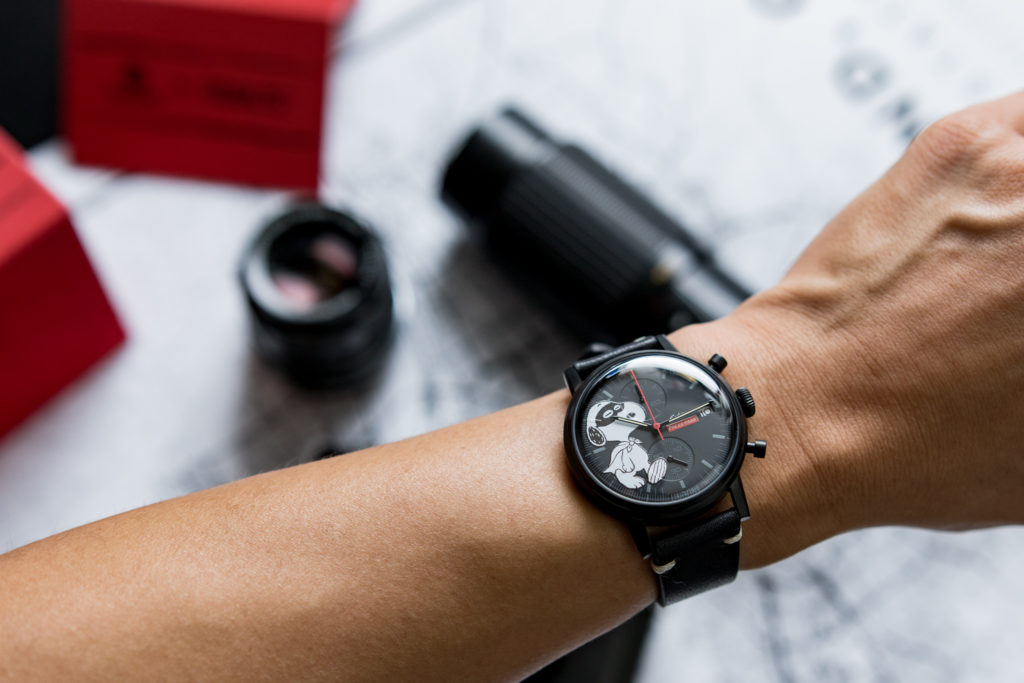 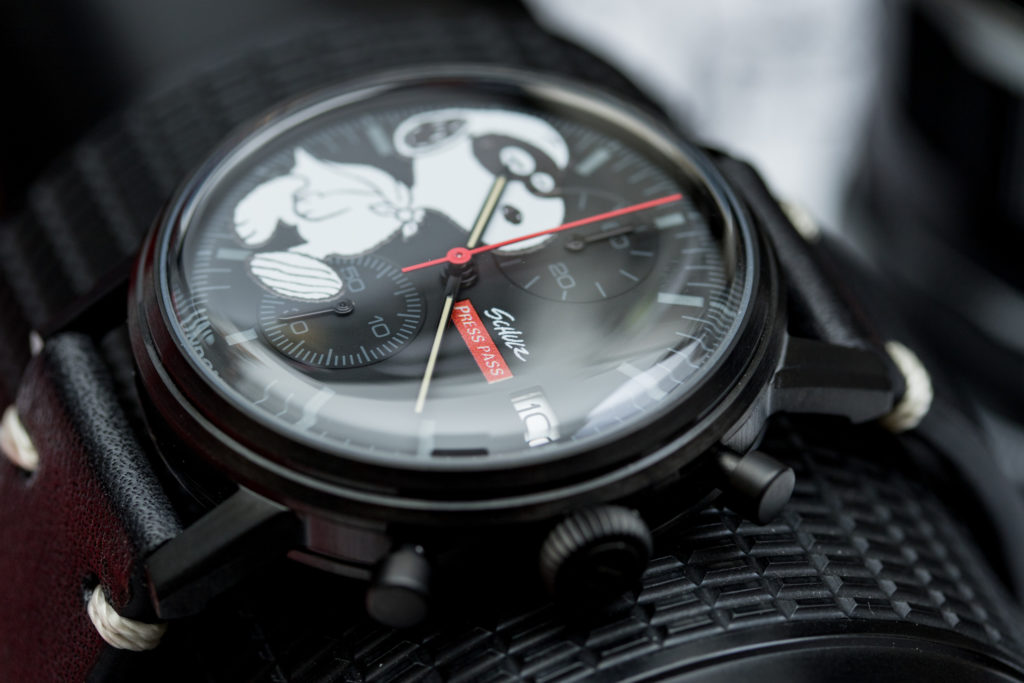 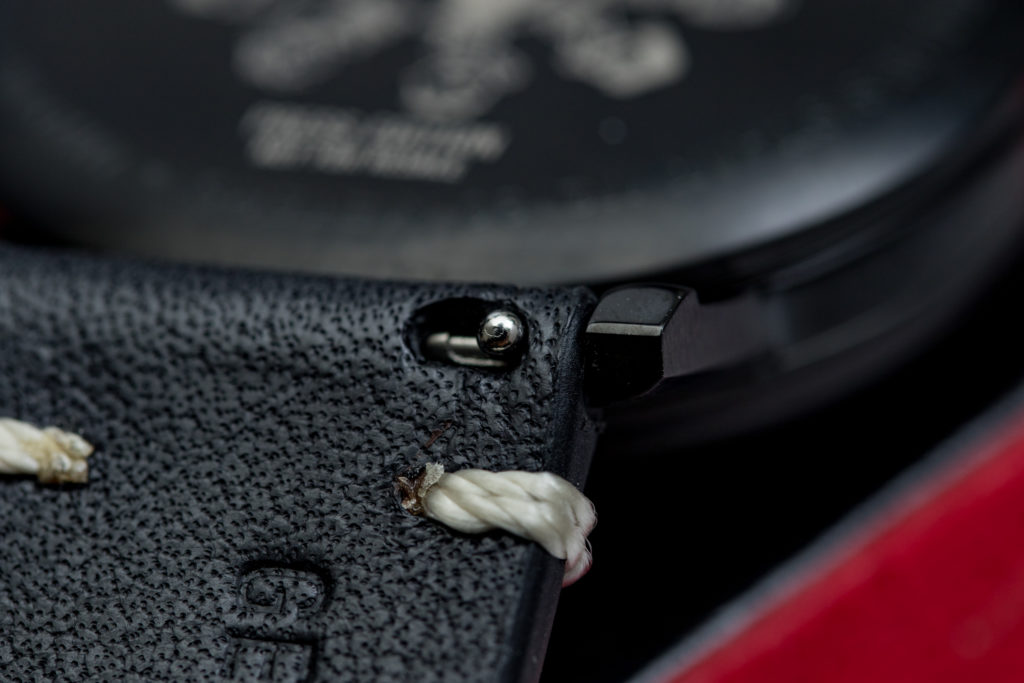 On the other hand, my custom watch paired well with my blue suit and did get some comments. One very obvious reason, the blue biker series stitched strap and white dial. The concept behind my design of this watch was all due to the Speedy, Snoopy, NASA and one Peanuts comic strip including Charlie Brown and Linus. Let’s start with the strap and work our way into the dial. 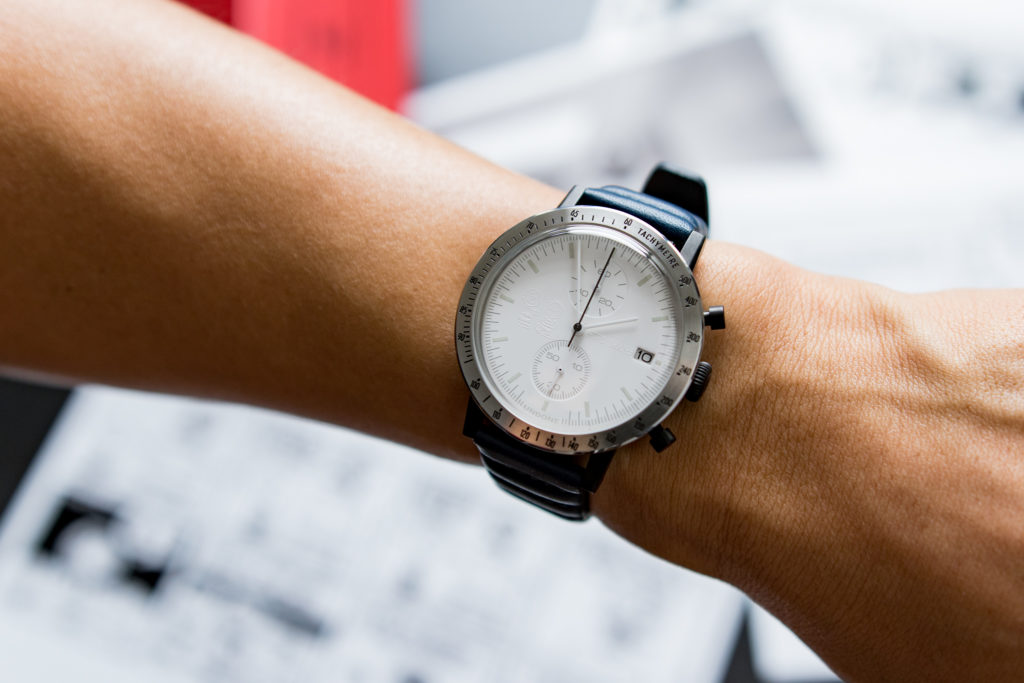 The biker series strap is a fairly new edition to Undone’s 20mm collection of watch straps. It’s well made and has pleats that mimic the look of the stretchable pleats on motorcycle pants and jackets where it needs to expand and contract due to body movement. I was particularly drawn to it as it reminded me of astronaut space suits and their wide fabric sections that allowed bending of the suit where the joints are located. The blue color reminded me of the NASA Logo and the background of the Snoopy picture on the dial and caseback of the Snoopy Speedy. 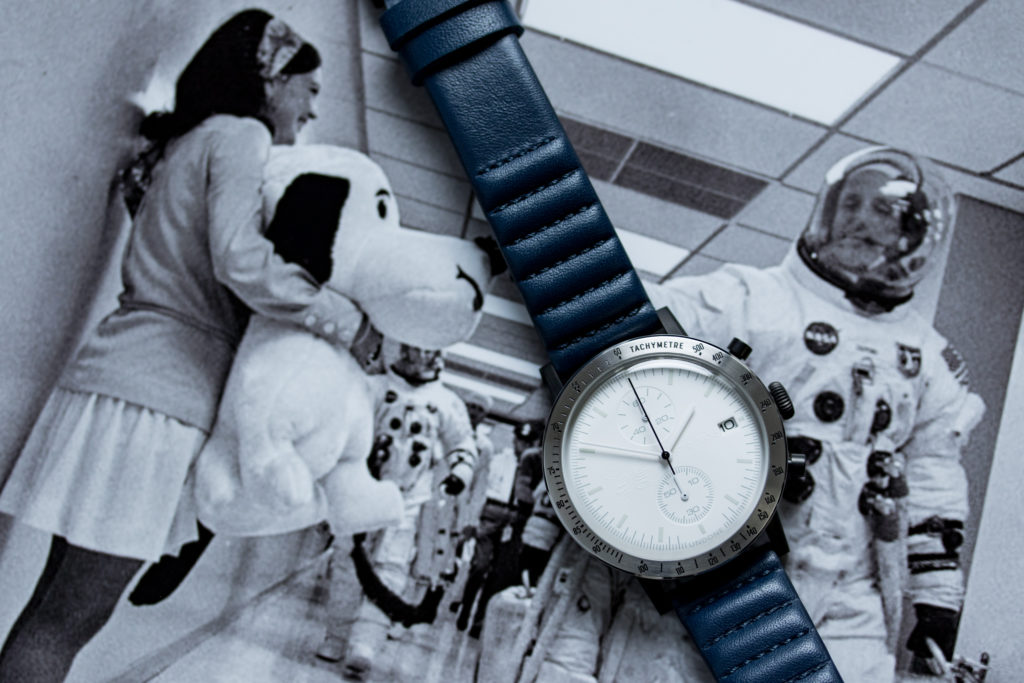 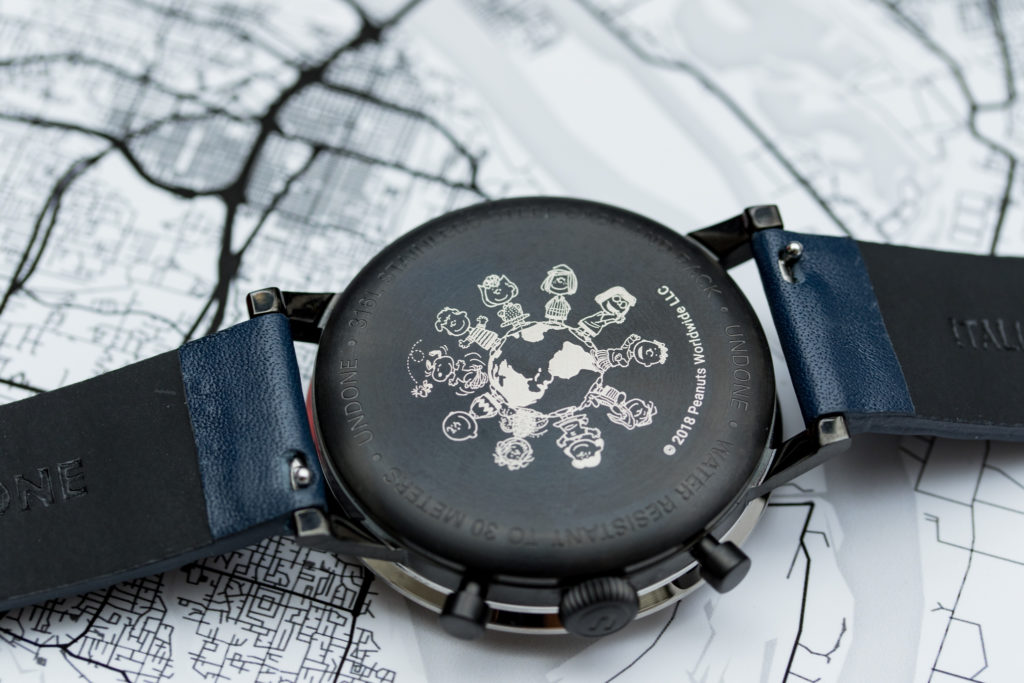 Omega’s all black Dark Side of the Moon watch inspired me to have an “all white” watch to mimic the “bright side of the moon.” To complete this look I chose an all white dial with white hour and minute hands, white date disc, and silver brushed tachymeter bezel on the front side of the watch. For the back side, I went with creating the dark side of the moon by having a black case and solid caseback with the Peanuts “One World” engraving. 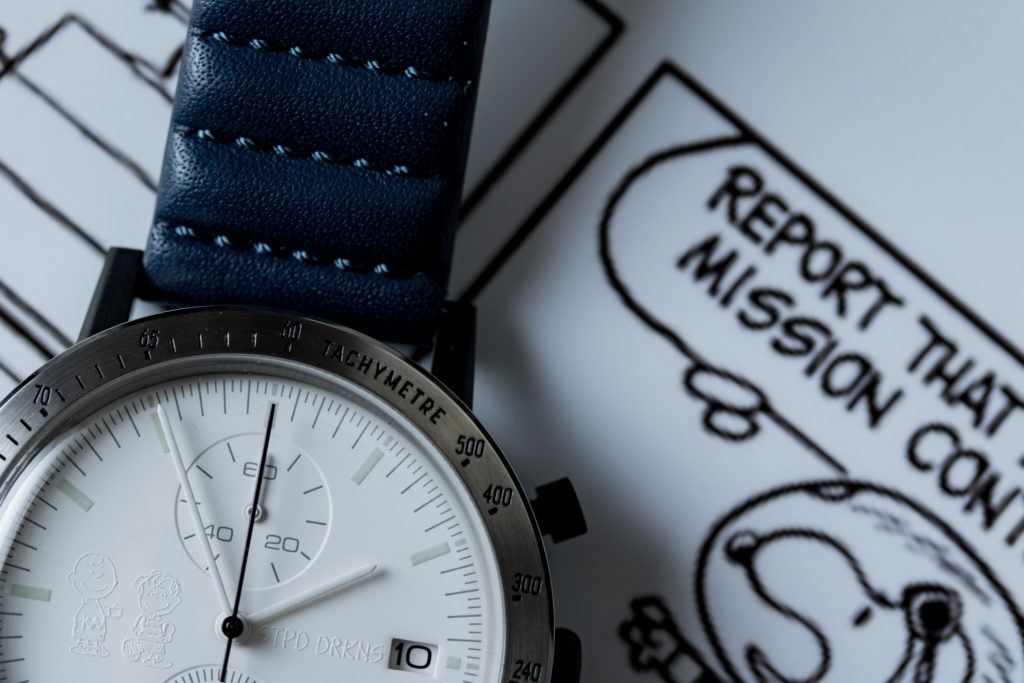 To keep it a Peanuts watch, without attracting too much attention and still following my design concept of having a “bright side of the moon” watch, I chose a Peanuts comic strip and truncated one of the quotes. I had the characters printed in white on the white dial along with the text “STPD DRKNS” also in white. The finishing touch is the black seconds hand contrasted against the white face since Snoopy is mostly white in color, but has black for eyes, nose, ears, mouth, and tail. The whole idea of having a quote say “Stupid Darkness” on an all white case plays on itself and reminds me to look at the bright side.

Overall, the legibility of the watch is great as the white hands, in most lighted situations casts a shadow behind the hands creating enough contrast to tell the time. The “meca-quartz” actuated chrono pushes the black seconds hand around the dial and it’s super pleasing to look at against the all-white layout, giving it a very minimalist and old school stopwatch feel. My only gripe would be that the date window seems a tad too small for the font size on the date wheel, as the numbers get visually cutoff at various angles. 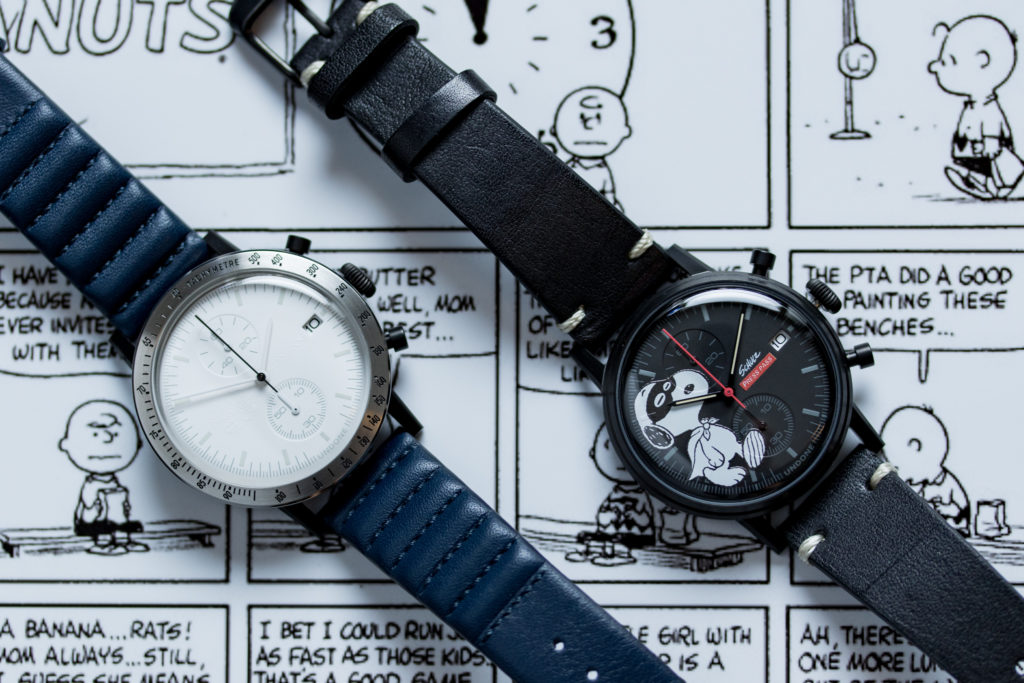 We as watch enthusiasts are an interesting bunch and we like our watches for simple, complex, single, or various reasons, but a lot of times it just purely comes down to what we like. Having the ability to create a customized watch opens up an avenue for watch enthusiasts who want a certain look or want to create something uniquely individual. Undone has done a great job of making personalized watches easily accessible by function, execution, and price point. Their collaboration with Peanuts will no doubt spark more interest from consumers as being the only watch company with customizable Peanuts characters. Pricing starts at $330 and you can learn more as well as play with the customizer here at undone.com.

Necessary Data:
>Brand: UNDONE
>Model: UNDONE X Peanuts Urban “One World” Chronograph
>Price: $330 -$450
>Size: 40mm – 42mm
>When reviewer would personally wear it: THe “Press Edition” I’d wear with casual urban/modern attire while out on the town or when I need to be the “Masked Marvel” and complete feats of awesomeness. Custom “Bright side of the moon” I’d wear paired with a suit or casual light-colored attire. Honestly, I like both enough to wear on the daily, but not everyone is comfortable with cartoon characters on their watches.
>Friend we’d recommend it to first: Anyone who likes comics, or is a geek of some kind, Peanuts/Snoopy lover, and people who like owning things that other people don’t have.
>Best characteristic of watch: Highly customizable, great finish and the overall size of the watches are manageable and welcoming. The straps are also of very high quality.
>Worst characteristic of watch: If you don’t like Peanuts or cartoons, you’re better off customizing one of their other watches. Also, as a daily wear watch, the mineral glass getting scratches and lack of AR coating may get annoying and weathered looking.