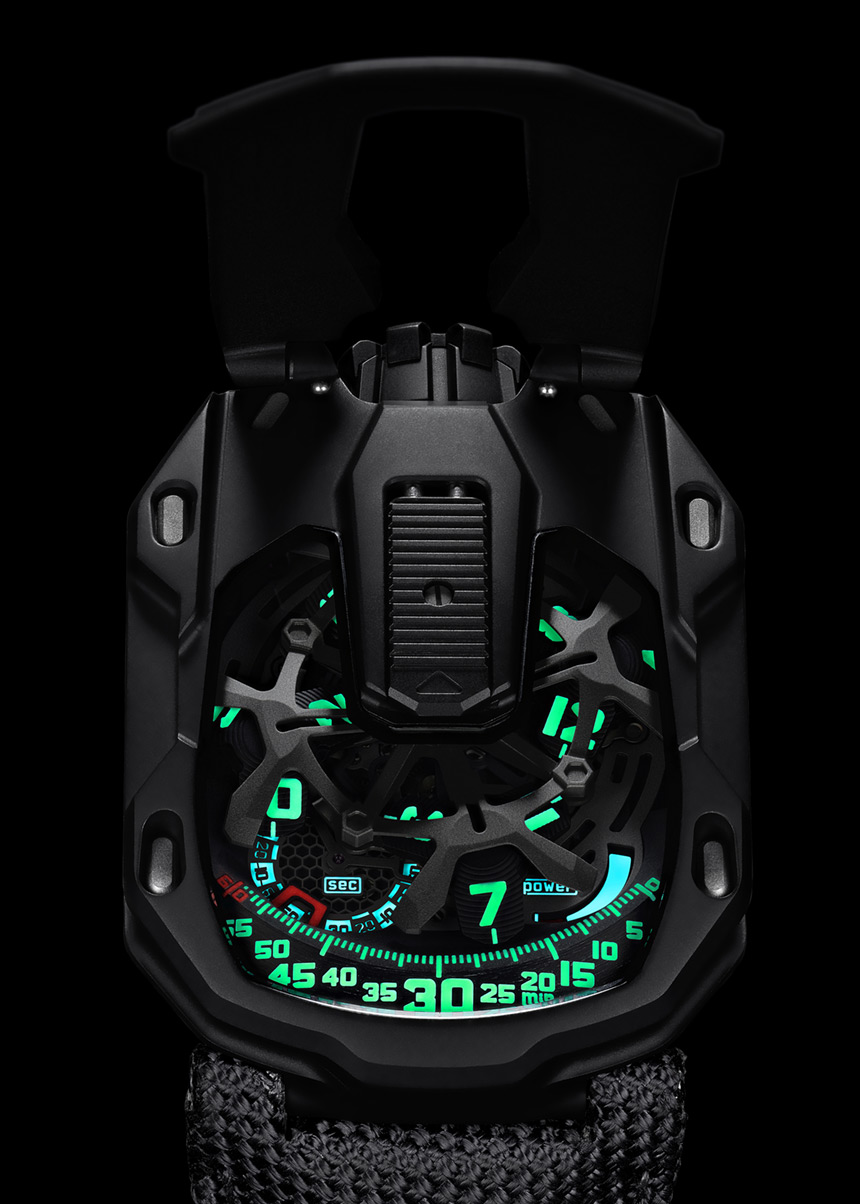 Someone seeing their first Urwerk watch might have their mind blown by looking at these pictures, but followers of the brand will find a lot that’s familiar. For everything crazy and awesome about the new Urwerk UR-105 CT Kryptonite watch, it mostly represents a subtle cosmetic change to existing Urwerk products. Specifically, the Urwerk UR-105 CT Kryptonite emphasizes strong and ample luminant and its contrast with a darkly finished titanium case. 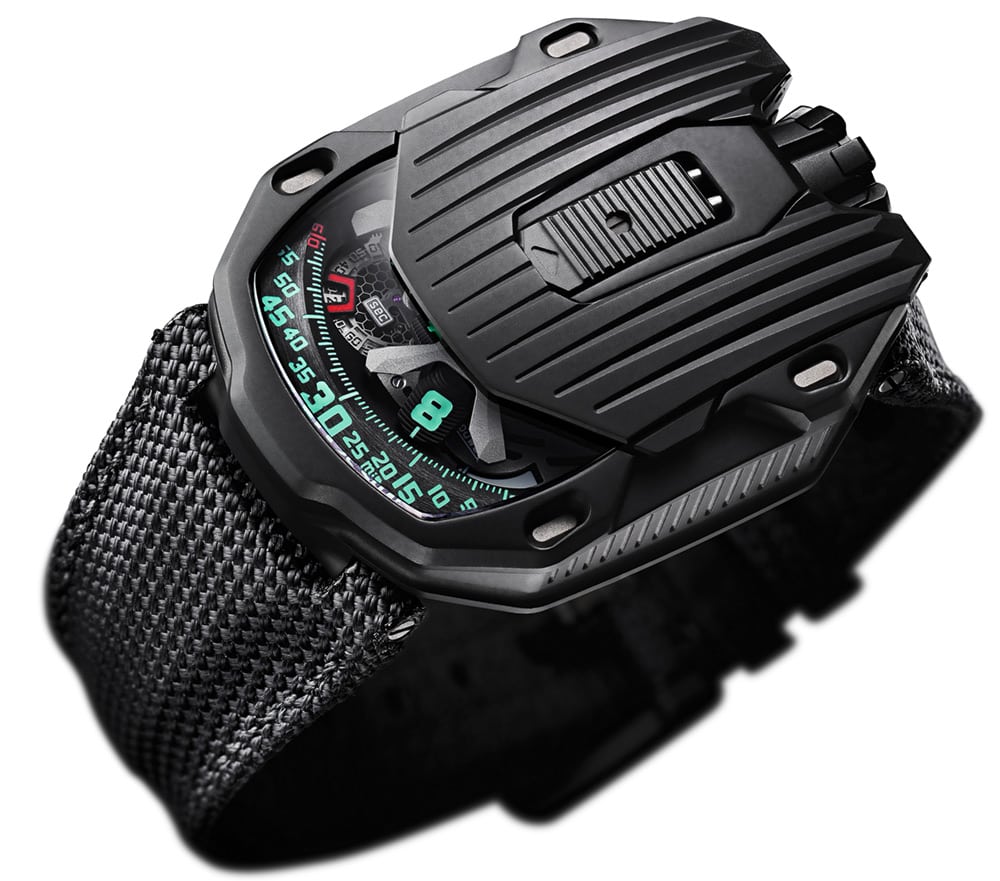 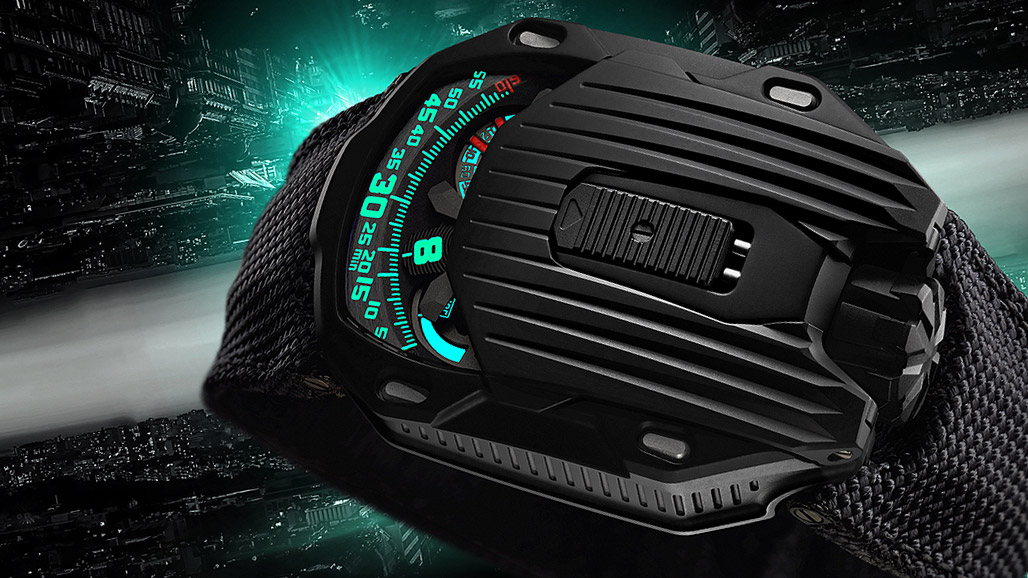 More specifically, the Urwerk UR-105 CT Kryptonite is apparently an even more lumed-out version of the UR-105 CT Streamliner watch released in 2017 that came in steel or black titanium, itself a twist on the existing UR-105 watch family. The Kryptonite name refers, of course, to the meteorite from the Superman universe that glows like the watch’s luminant (and makes Superman un-super). Urwerk has often been remarked upon to fit into comic book and other sci-fi universes, particularly Batman, but I can see this one as reminiscent even of Blade Runner or Tron, maybe. That slightly retro element of its retro-futuristic feel comes at least partly from the Art Deco design inspiration the brand says is taken from the architecture of New York (aka “Gotham”). 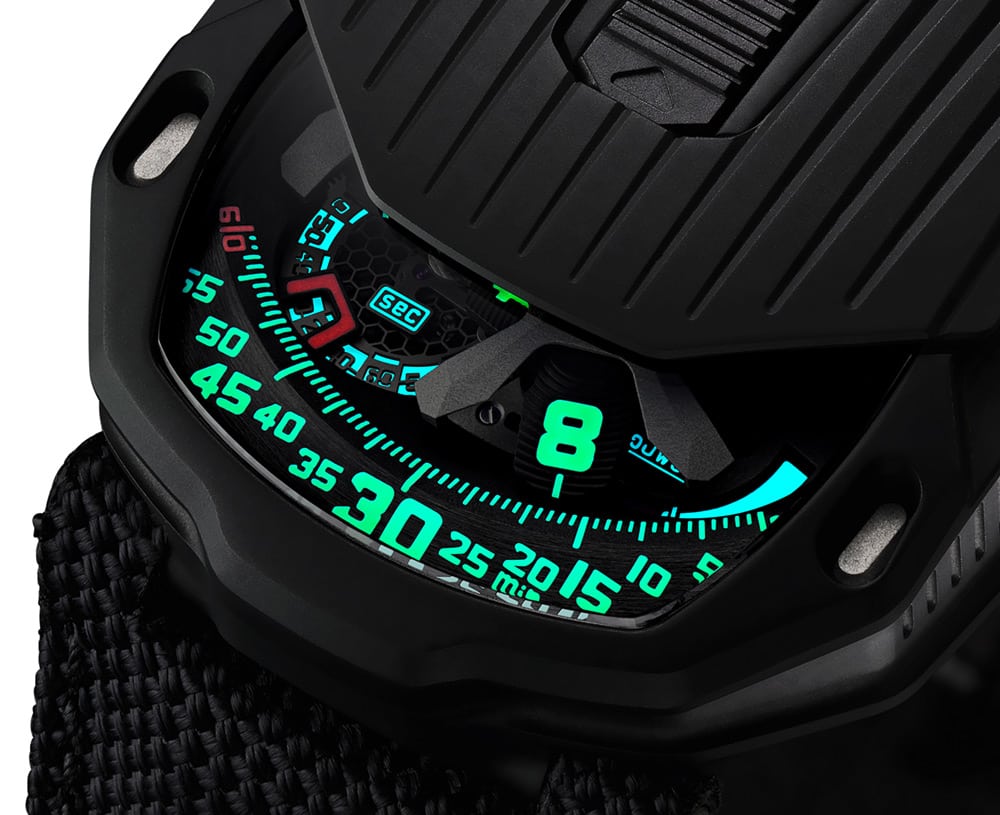 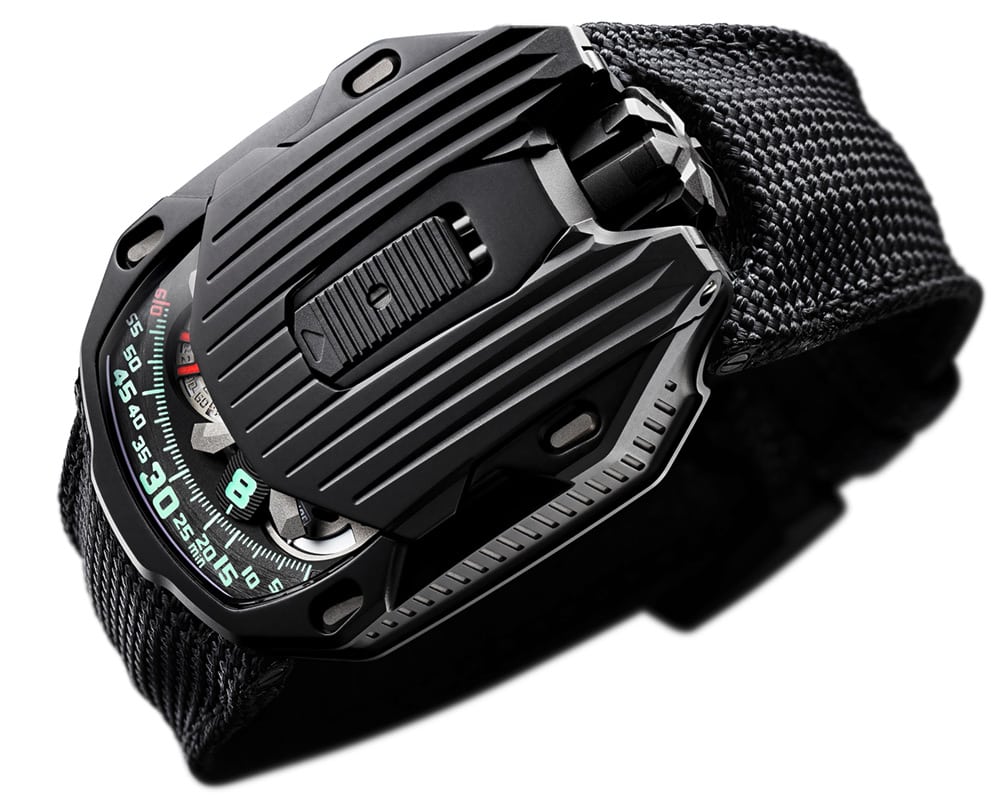 Compared to the PVC black titanium version of the UR-105 CT Streamliner mentioned above which uses a yellowish lume, I believe, the Super-LumiNova colors on the Urwerk UR-105 CT Kryptonite are a combination of crisp, minty blue and green. Different types, colors, and brands of luminescent glow with varying intensities, but the amount of luminant applied also makes a big difference in its brightness. Urwerk doesn’t specify more than the the use of Swiss Super-LumiNova, but the brand’s materials do quote co-founder Martin Frei mentioning that the Urwerk UR-105 CT Kryptonite’s lume is so strong that on full charge it can almost be used as a flashlight in a dark room. We’d like to test that for ourselves, but one should generally expect high quality from Urwerk – and for the high five-figure price. 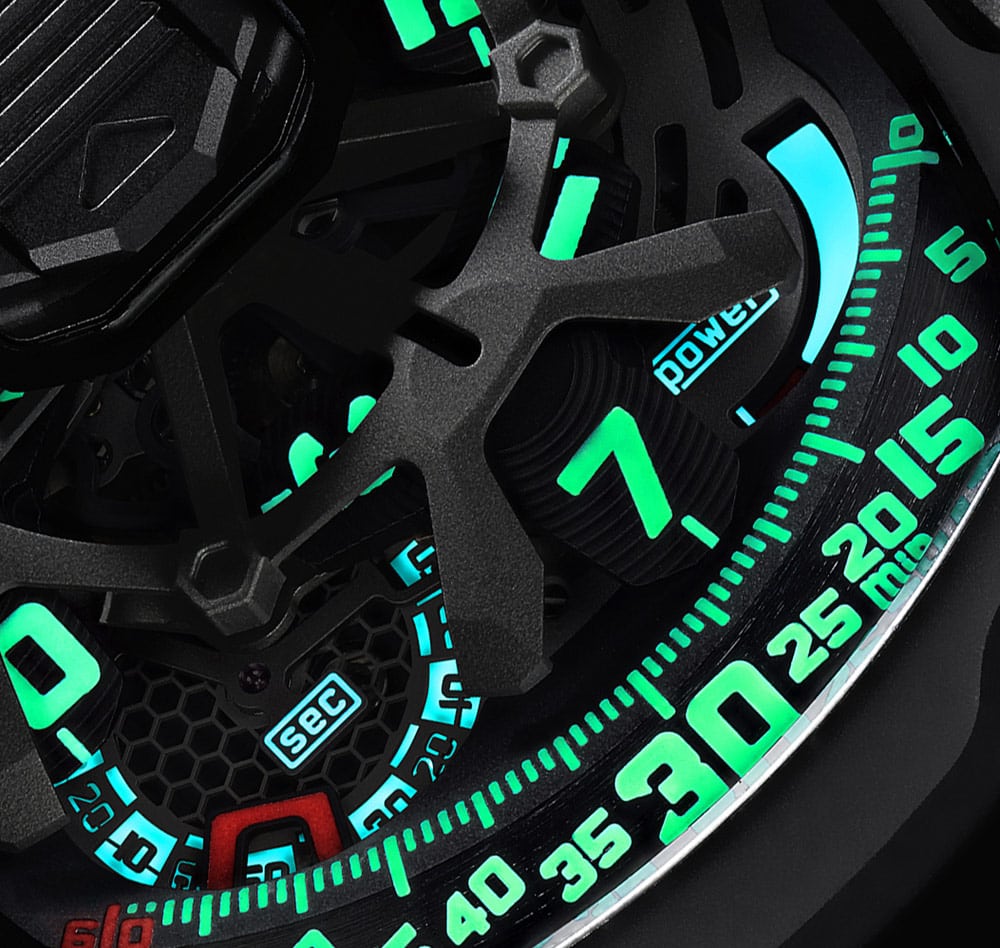 The lume is applied to all of the displays, being the hours and minutes as indicated by Urwerk’s signature satellite (“wandering”) hours, a digital seconds display, and a power reserve indicator. If you don’t already know, the satellite hour indication (in this particular iteration) consists of four arms, each with a disk that rotates to bring the current hour forward and simultaneously point to a minutes scale. The seconds are indicated also on a disc in tens by a red frame, and the power reserve indicator (48 hours) is off to the right-hand side of the minutes scale. 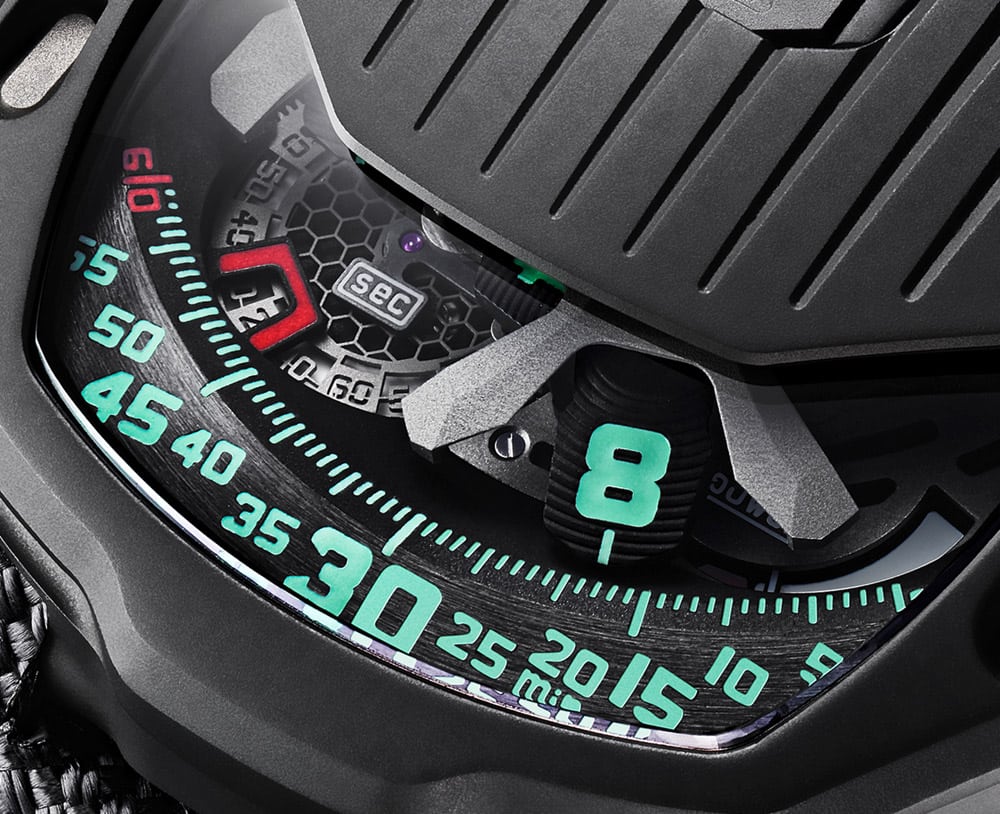 The lume color (and possibly the volume that is applied) is, in fact, the primary difference between the PVD black Streamliner and the Kryptonite, as far as I can tell (not even sure a new name was necessary). In a titanium case with black AlTiN-coating that measures 39.5mm wide by 53mm long by 17.8mm thick, the specs and UR 5.03 movement inside are all the same. Titanium is nice and light so it should help make a big watch like this more wearable. We have had a chance to write about each of the features found here numerous times, but they include the movement with its “twin turbines” system that gives the wearer more control over the automatic winding efficiency via a lever on the underside of the watch. You can see more about that in the article linked to above along with caseback pictures (which Urwerk did not provide for this particular release). 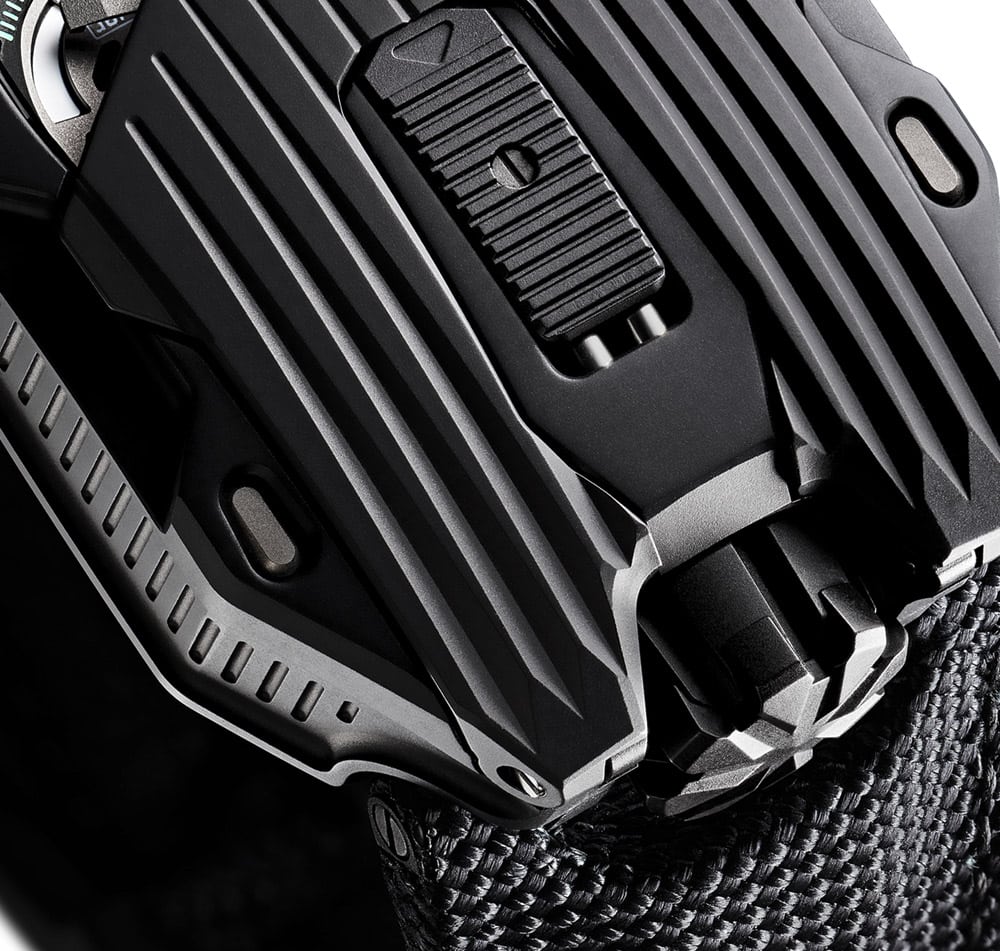 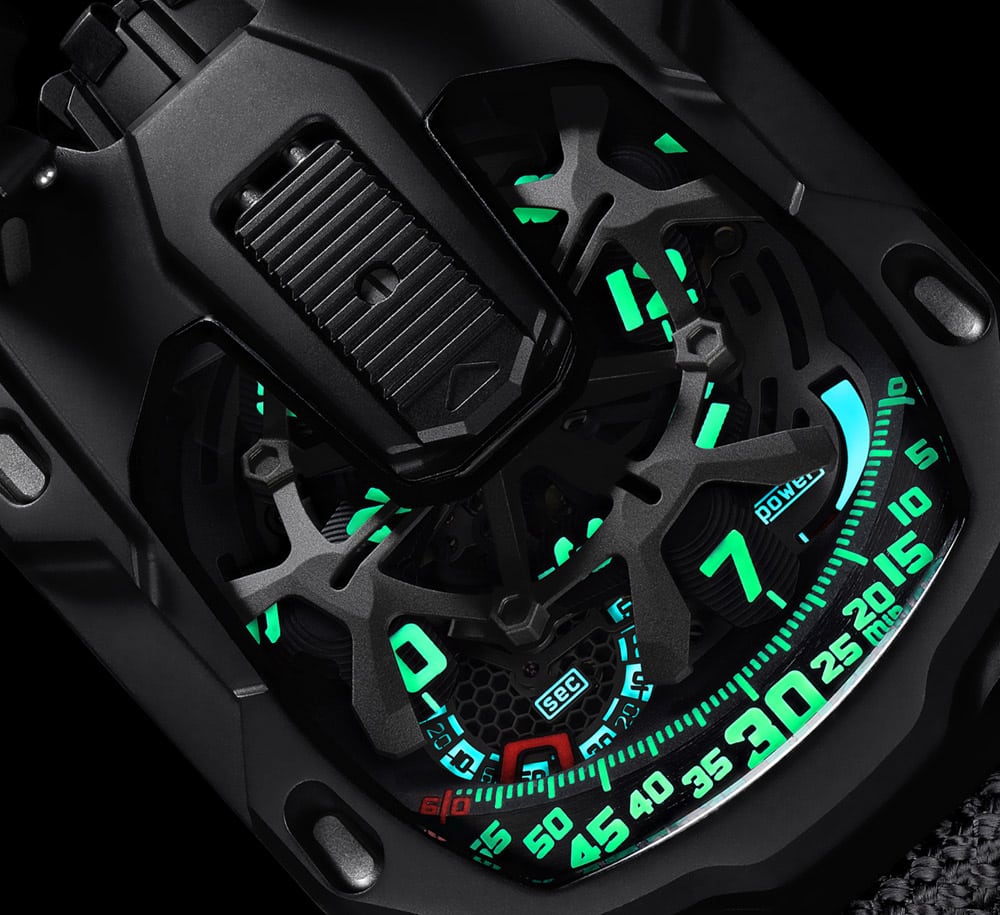 A view of the movement doesn’t require turning the watch over, however, but rather sliding the button on top to open the “hunter-style” case cover like the hood of a car. Still covered by a sapphire crystal, it will be particularly cool to see the glowing parts even as they are tucked away inside the movement. With how unusual an Urwerk looks on the wrist anyway, just imagine then popping open the case cover to show inquisitive friends. However, when the hour changes, I do wonder if the indicator’s lume will be insufficiently charged due to having been under the case cover – it’s not that big of a deal, but the lume is especially emphasized on this version. 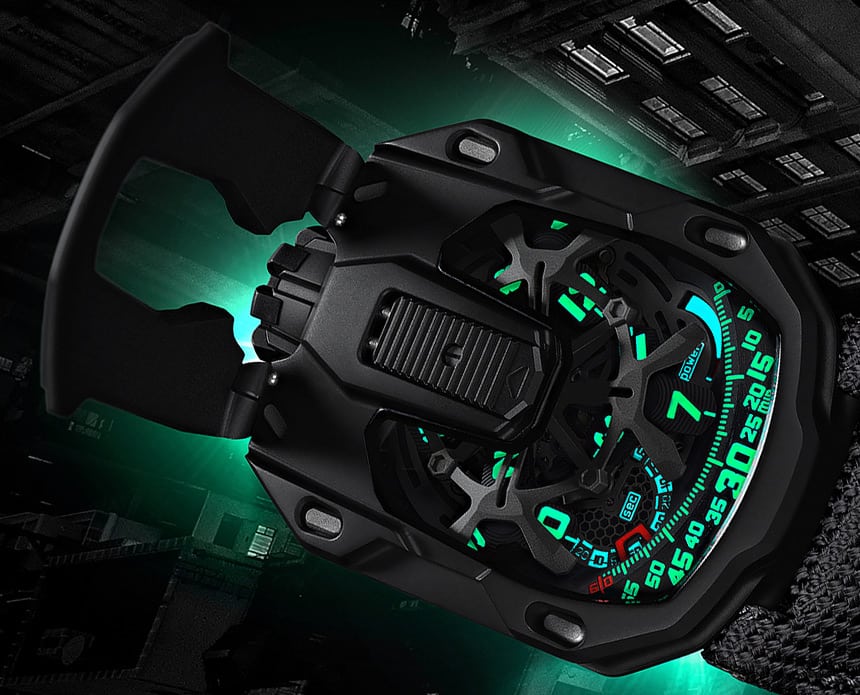 More variety and more lume for the Urwerk UR-105 CT is surely a good thing. Personally, if I were watch shopping in this price range, the Urwerk UR-105 would be at the top of my list and this particular aesthetic execution represents the brand’s character well to me. If you already have a Batmobile or something similar, this might be the perfect accessory and you can probably afford it too. Priced the same as the Streamliner, the Urwerk UR-105 CT Kryptonite watch has a pre-tax price of 65,000 CHF. urwerk.com