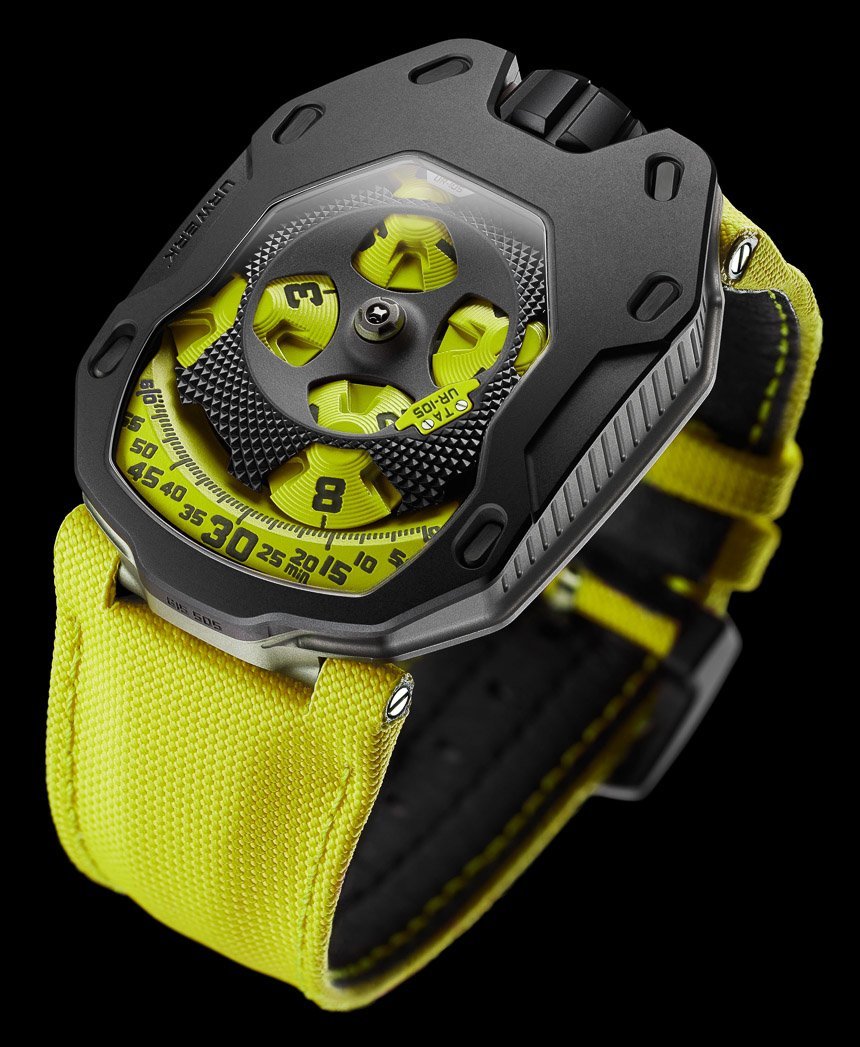 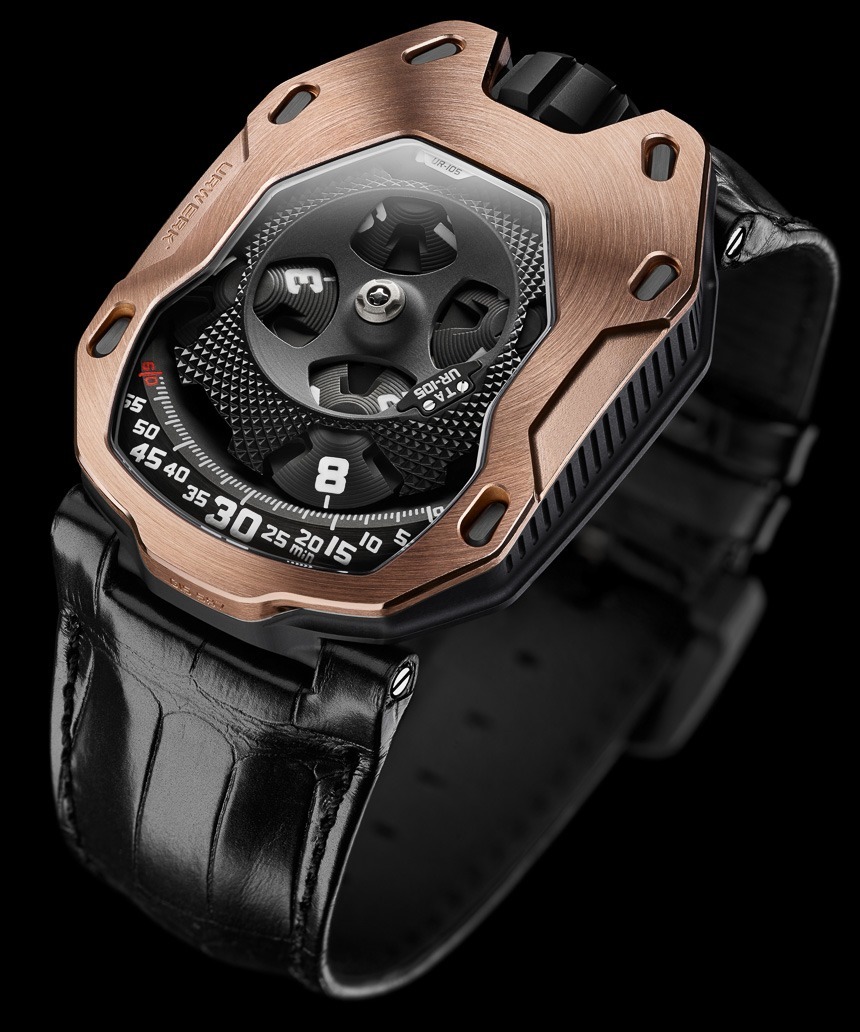 With the new-for-2015 Urwerk UR-105 TA collection, the Swiss brand is making one of their most appealing timepiece collections even better. In 2014, Urwerk first unveiled the UR-105M watches which introduced a great new design as well as a new entry-level price point for the brand. The next model in the family is the Urwerk UR-105 TA “Turbine Automatic Knight Watches,” which extends the range with not only new visual styles, but a totally different movement. Whereas the UR-105M was a manually-wound timepiece, the Urwerk UR-105 TA (UR-105TA) contains an automatic winding movement (Urwerk’s “Turbine Automatic” system).

Why “Turbine Automatic?” Well, most Urwerk automatic watches have a oscillating rotor which is connected to a set of turbines that visually spin with the rotor. Part of this is just for fun and showmanship, but it is also part of a system which allows the rotor to spin either easily, with a bit more resistance, or to stop it all together (when you expect the Urwerk UR-105 TA watch to experience “serious movement” and potential shock). There is a switch on the back of the Urwerk UR-105 TA case that allows the wearer to select between automatic winding modes. 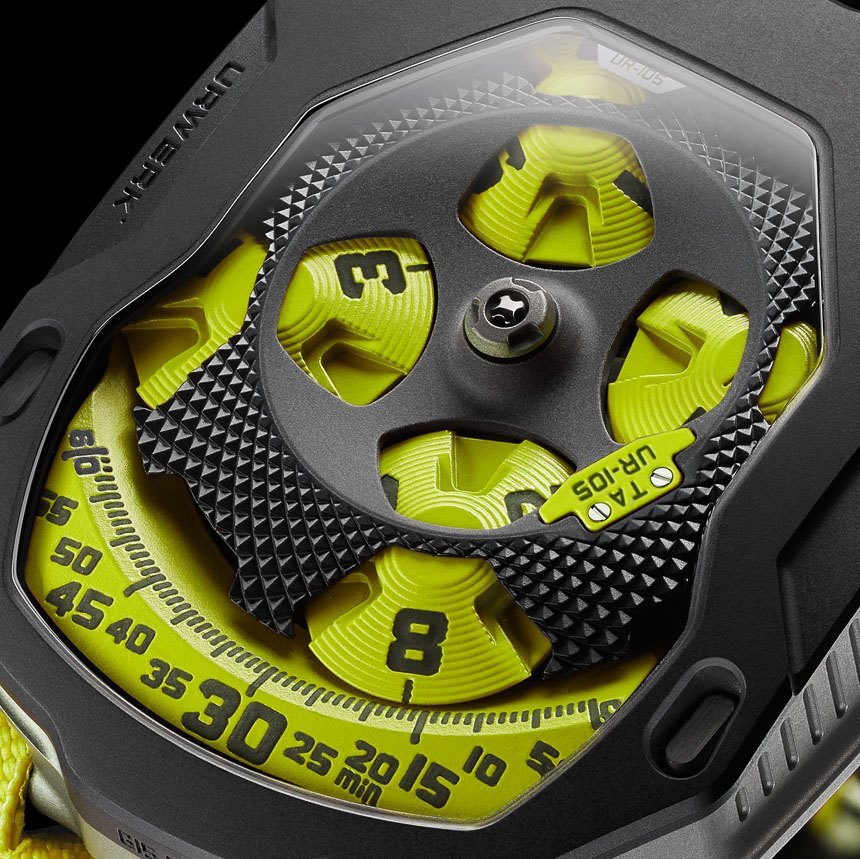 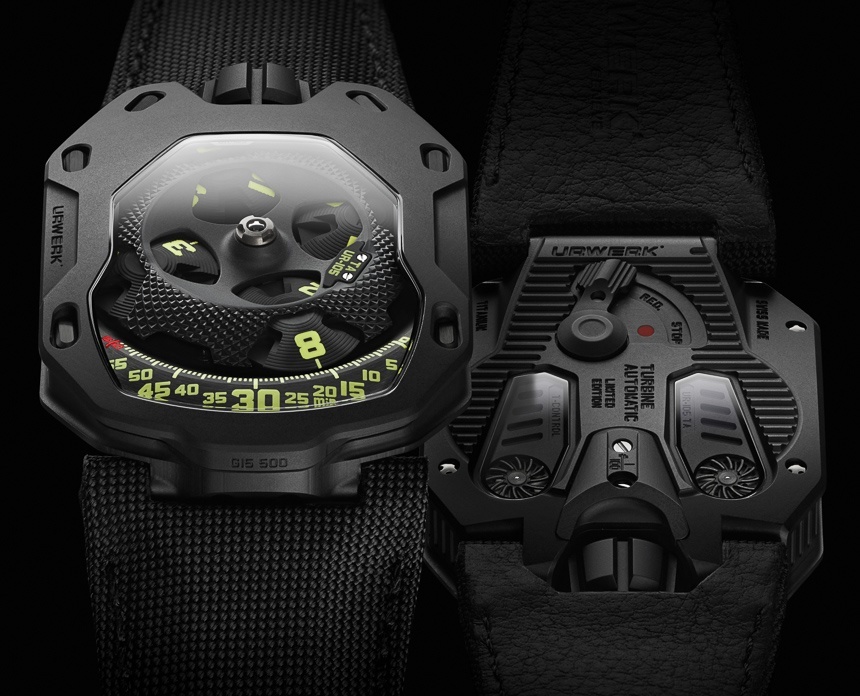 There isn’t a clear winner between the Urwerk UR-105 M (UR-105M) and the Urwerk UR-105 TA (UR-105TA), if one needed to make a comparison. The watches share the same case design which has different finishing options and some material changes, but is mostly in titanium at 39.5mm wide, 53mm long, and 16.8mm thick. The Urwerk UR-105 case is also extremely comfortable and cool looking. The only Urwerk case I like just a little bit more is that of the UR-210 (see the Urwerk UR-210S here).

The UR-105 M contains the manually wound Urwerk caliber UR 5.01, while the Urwerk UR-105 TA uses the new caliber UR 5.02 – which has 48 hours of power reserve and operates at 4Hz (28,800 bph). From the “dial” of the watches, it could be easy to confuse the two models, but there are changes here as well as internally, and the movements offer rather different displays. The dial is covered with a custom-shaped sapphire crystal and you only have the time with hours and minutes using a version of Urwerk’s popular “satellite” time display, which has turning discs with hour markers on them that drag across an arched minute scale. It is a very different way of telling the time as compared to standard hands, but ends up being remarkably easy once you get the hang of it. The faces themselves, between the UR-105 M and the Urwerk UR-105 TA, have some different textures and coloring (both have lume). 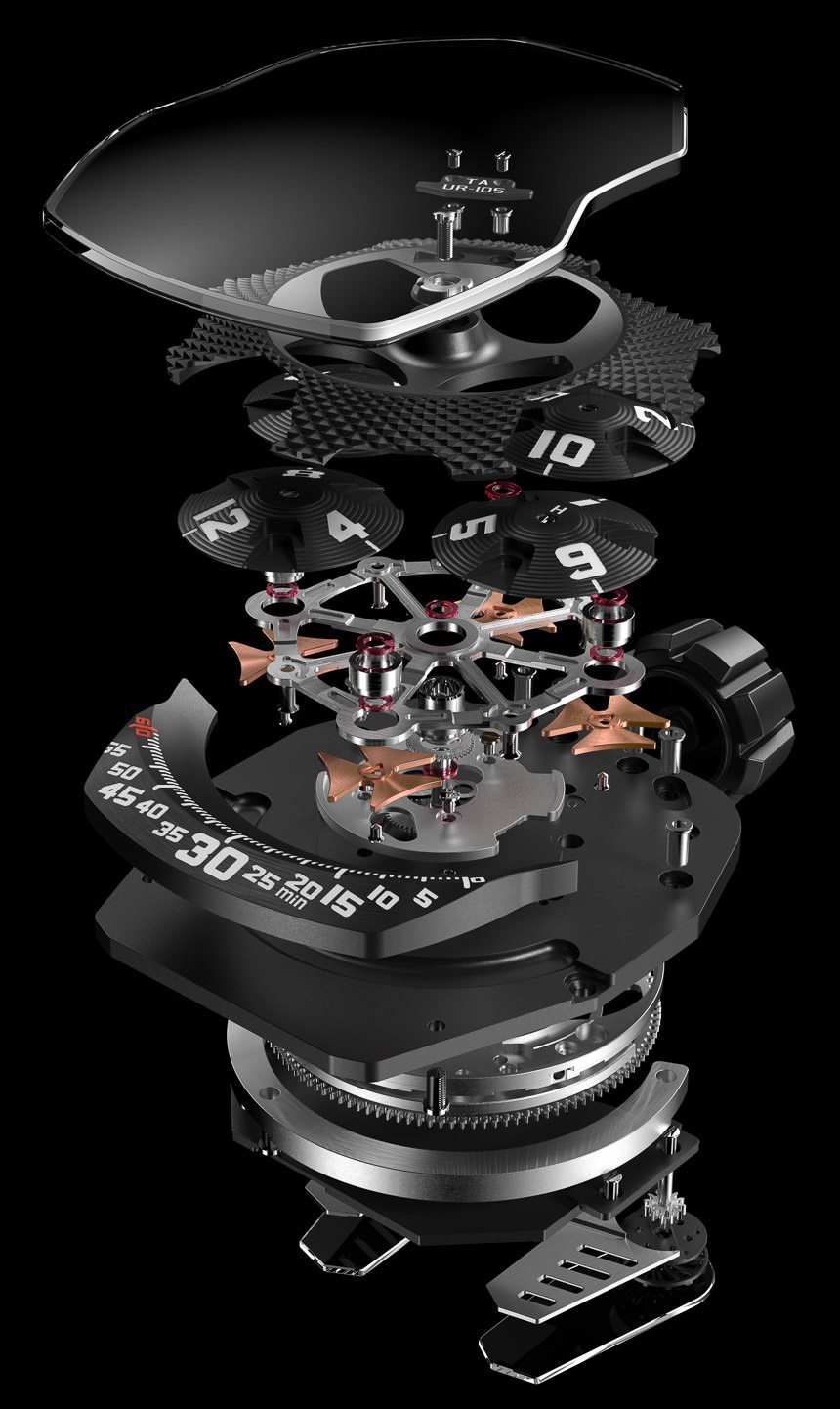 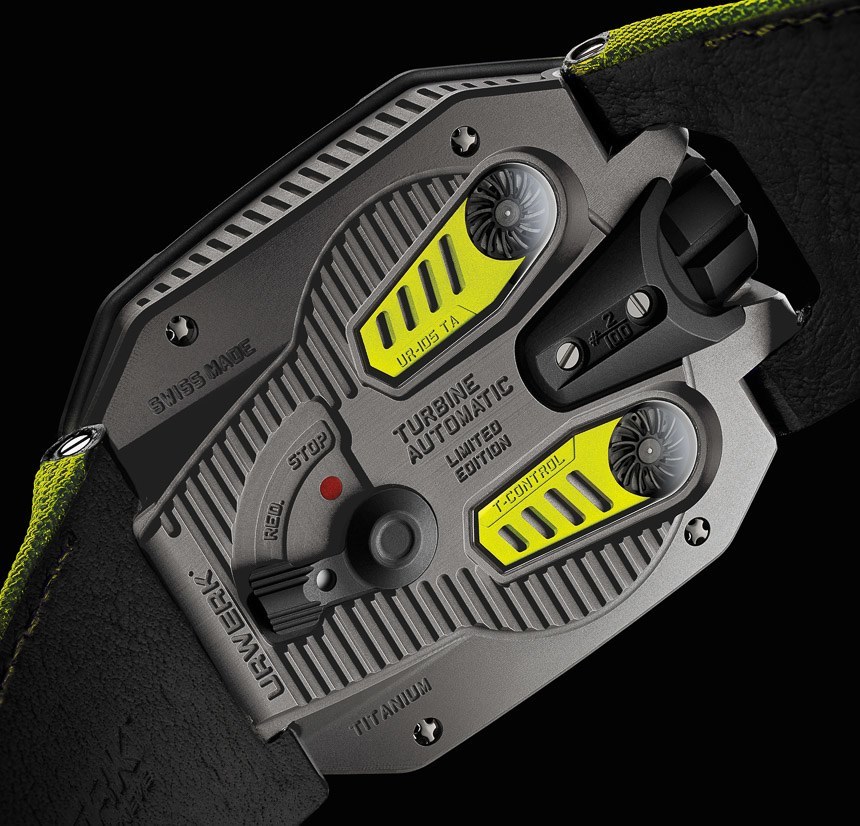 Where things start to appear different is when you turn the watches over and view the caseback. However, let’s start with the side of the case, which is devoid of indicators on this new Urwerk UR-105 TA, whereas on the UR-105M, there is a second power reserve indicator as well as a seconds indicator. The back of the existing UR-105 M has a power reserve indicator, service indicator (when to send the watch in for service), as well as a screw that allows you to fine adjust the movement, tweaking the accuracy (a feature borrowed from the interesting Urwerk EMC). The Urwerk UR-105 TA has none of that – instead, opting for a movement that displays just the time with hours and seconds, and offering automatic winding with the selection indicator.

It would have been nice for Urwerk to at least maintain the seconds dial on the side of the case. The power reserve indicator would have been appreciated, but it is easy to live without given that this is an automatic watch. The price for the two watch models is remarkably similar, so it is clear that Urwerk simply wanted to expand on the collection while adding more options, versus going up or down the pricing scale. What is additionally interesting is, for what is the first time I can think of, Urwerk is offering some bold colors with the Urwerk UR-105 TA Black Lemon and UR-105 TA Black Orange. With that said, there are four versions of the Urwerk UR-105 TA in total which includes more traditionally sober colors that the brand is known for. 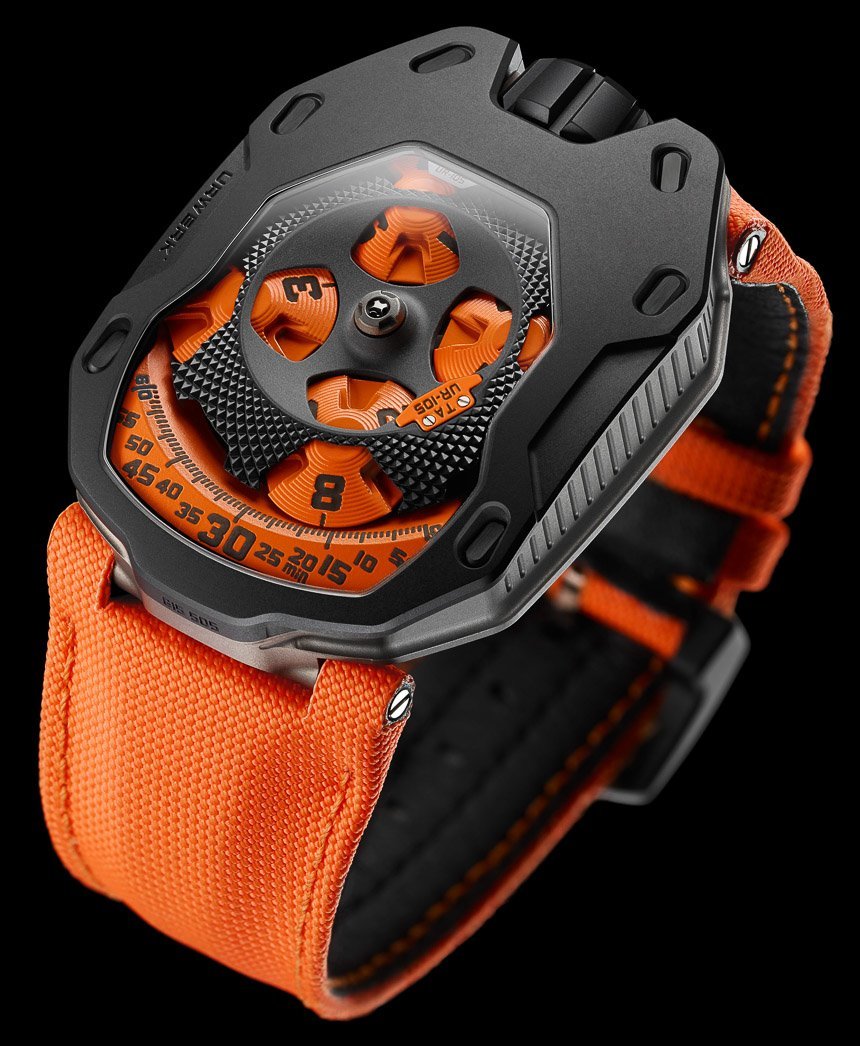 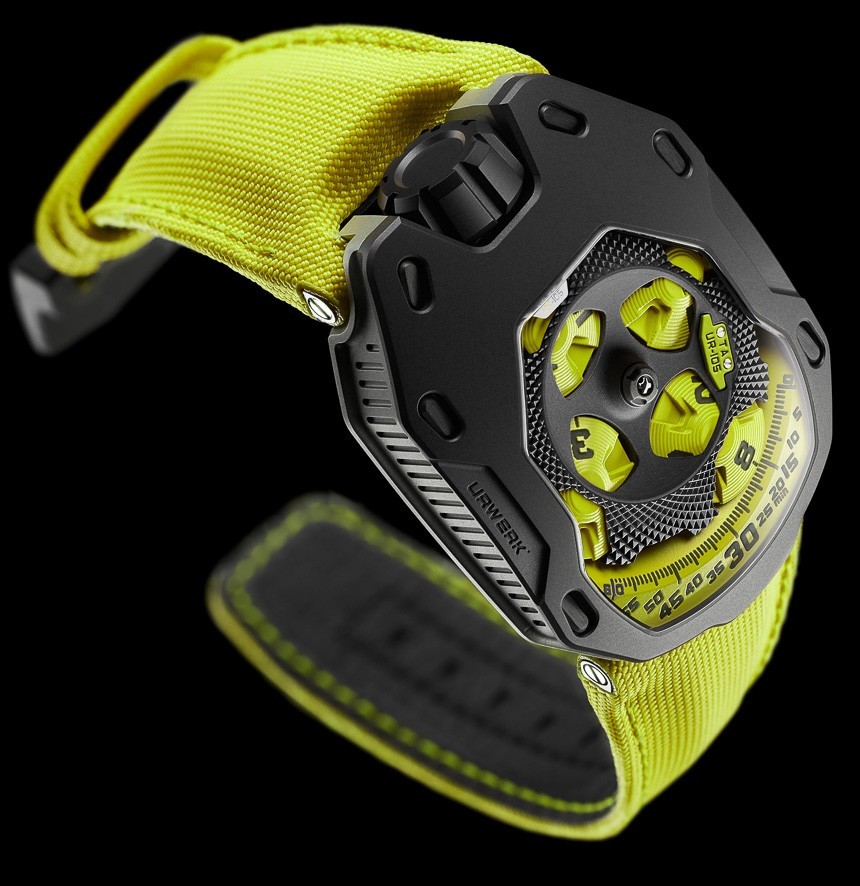 Urwerk nicknames the Urwerk UR-105 TA the “Urwerk Knight,” which sort of translates humorously when you think of the “Black Lemon Knight” in yellow armor. If you look at the brand’s official Urwerk UR-105 TA video, you’ll see that their personification of a knight for this new model has become a futuristic knight, while that of the UR-105 M was a more traditional medieval-style knight. In any event, whether or not you prefer the more sober black, the black and 18k red gold model, or the black and orange or black yellow models, I think the Urwerk UR-105 TA is a very appealing model with the rare combination of extremely avant-garde looks and daily wear versatility.