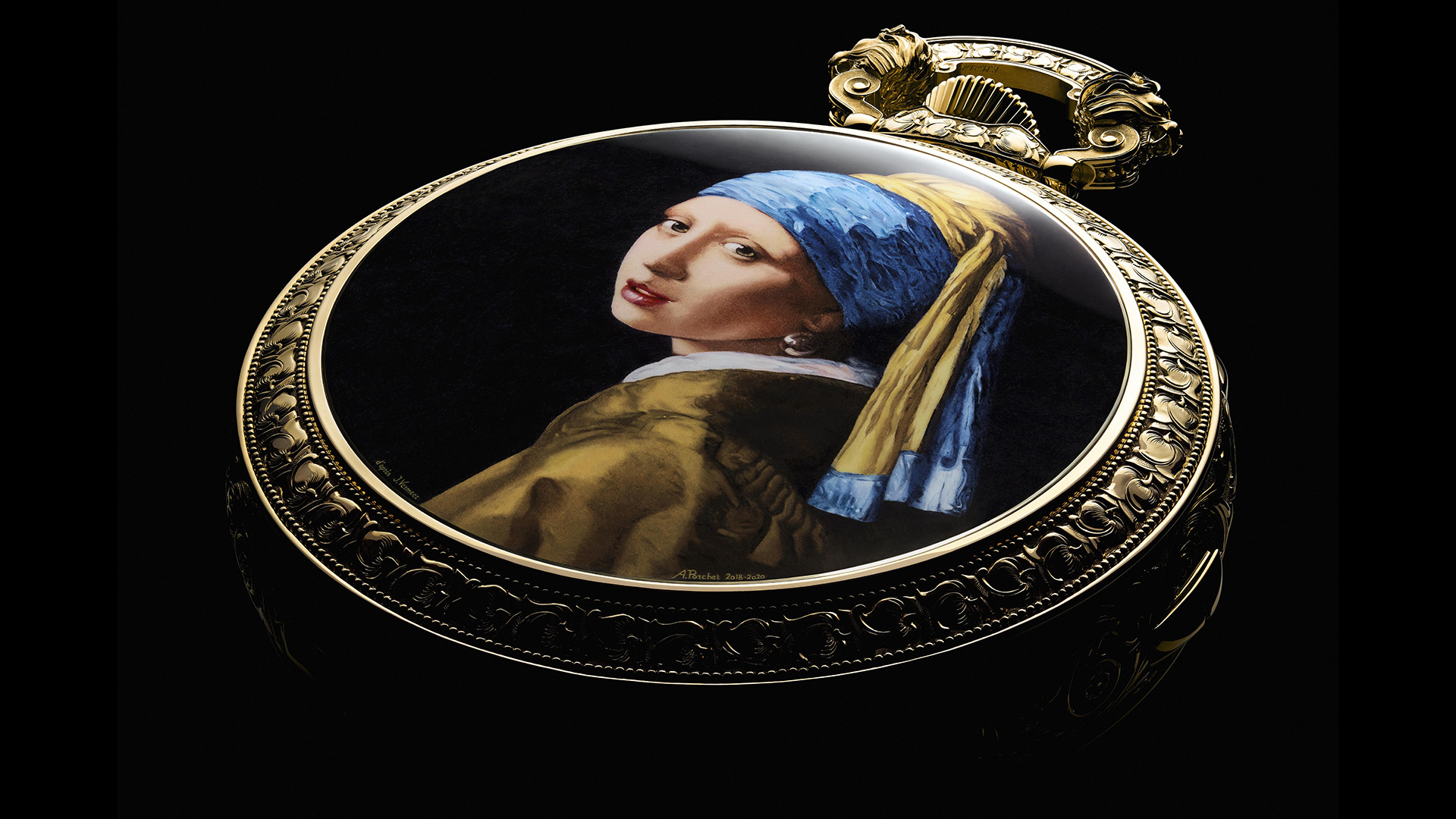 For sheer opulent extravagance, few if any artistic styles can match the intricate gilded complexity of the baroque period. In addition to epoch-defining works of art and architecture, the 17th and 18th century baroque era also saw the development of truly incredible works of horology, and for its latest one-off creation Vacheron Constantin’s bespoke Les Cabinotiers division aims to honor both this era of highly complex watchmaking and the works of Dutch baroque master artists. Combining both Grande Sonnerie and Petite Sonnerie complications together with a minute repeater, a tourbillon escapement, truly spectacular baroque finishing, and a miniature enamel recreation of Dutch master Johannes Vermeer’s seminal painting “Girl with a Pearl Earring,” the new pièce unique Vacheron Constantin Les Cabinotiers Westminster Sonnerie Tribute to Johannes Vermeer pocket watch is a phenomenally ornate display of horological might over eight years in the making. 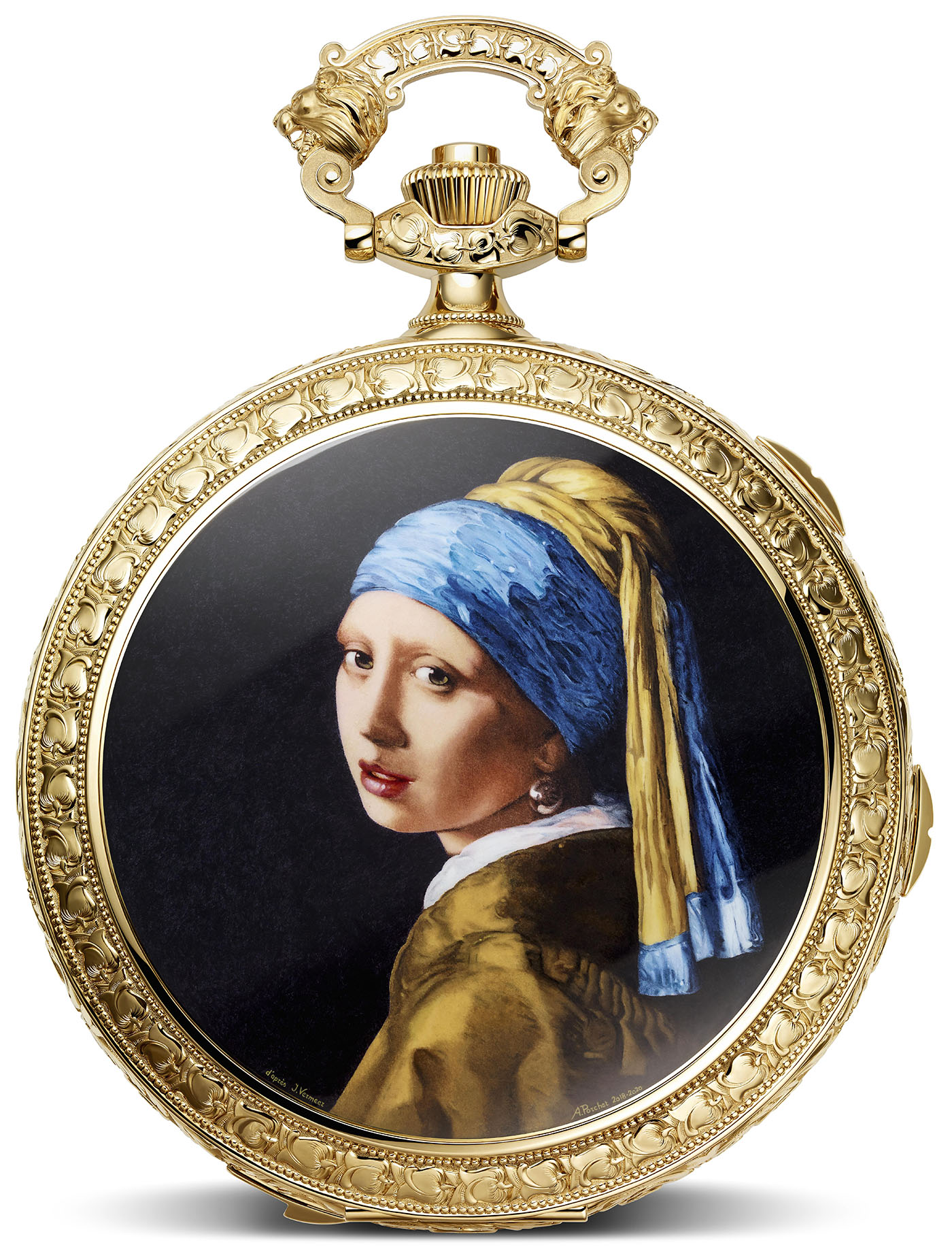 The Vacheron Constantin Les Cabinotiers Westminster Sonnerie Tribute to Johannes Vermeer is an imposing piece on sheer size alone, with an 18K 3N yellow gold case measuring in at a ponderous 98mm wide and 32.6mm thick. From here, Vacheron Constantin’s master engraver proceeds to create a filigree tribute to classical Dutch motifs, beginning with a repeating tulip pattern around the bezel flanked by twin pearl borders in a sly homage to Vermeer’s “Girl with a Pearl Earring.” The towering case sides continue this tulip motif, adding the classical acanthus leaf filigree texture along with a recurring scroll pattern. The bow topping the massive flared crown and pusher at 12 o’clock raises the standard of craftsmanship even higher, flanking the repeated tulip pattern with a pair of hand sculpted roaring Dutch lions in gold. It’s the hinged hunter caseback that forms the centerpiece of this ornate case design, however, with a hand painted miniature enamel reproduction of Vermeer’s “Girl with a Pearl Earring” by renowned enameller Anita Porchet. Over the course of two years, Porchet painstakingly reproduced the 17th century portrait down to its fine details, with just one of the layers of enamel on the enigmatic girl’s turban taking two weeks to paint. Seven shades of black were mixed to create the backdrop, and over 20 kiln firings were required to stabilize the delicate colors of the portrait. The final result is a stunning and vibrantly detailed recreation of perhaps the most famous of all Dutch artworks in images. 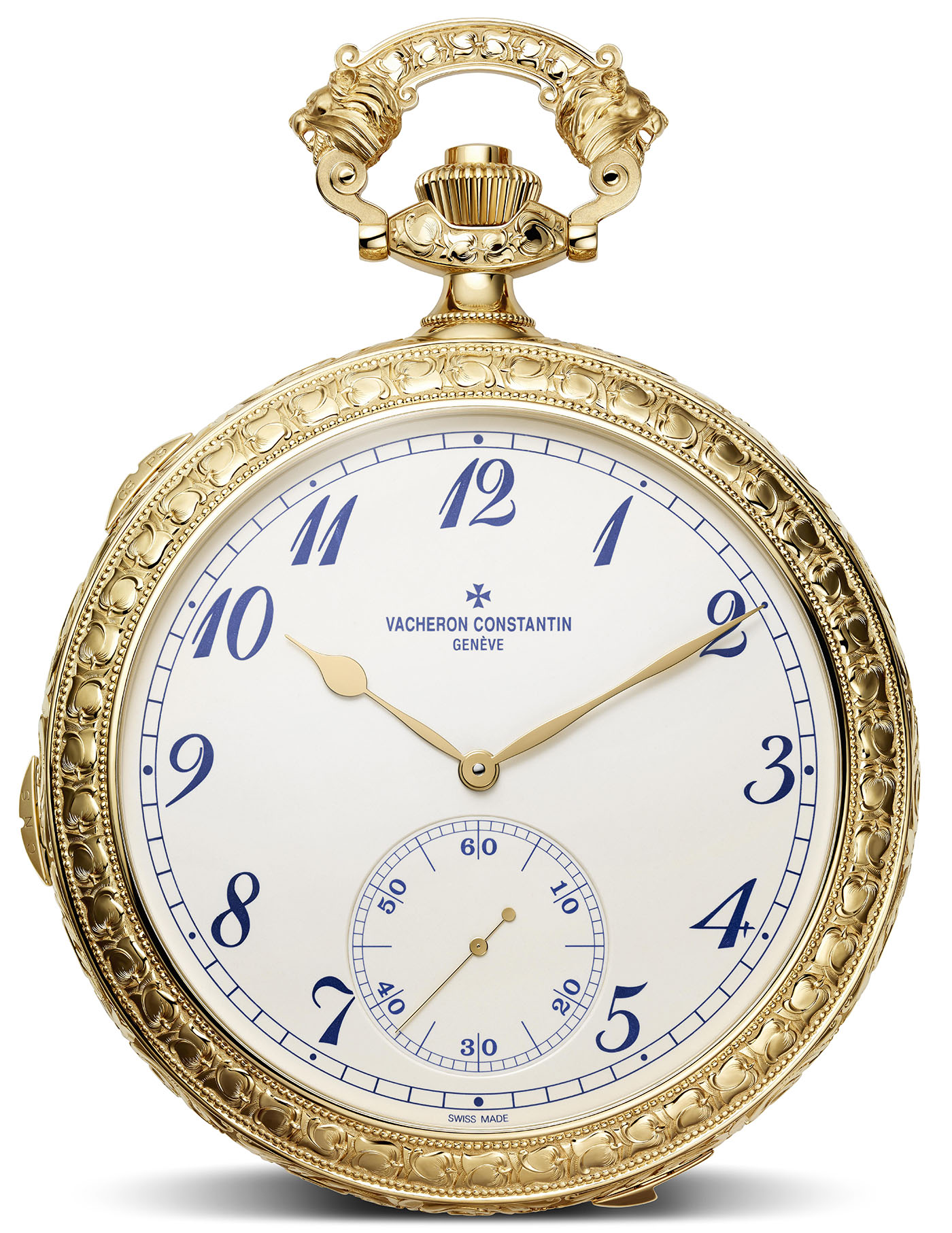 In counterpoint to the lavish decoration of the case, the dial of the Vacheron Constantin Les Cabinotiers Westminster Sonnerie Tribute to Johannes Vermeer is classical and restrained. The milky white Grand Feu enamel surface is cut through with swoopy oversized Breguet numerals in a delicate Prussian blue, along with a light outer railroad minutes track. What sets this simple layout apart is its sense of scale. For example, the elongated minute hand is a full 35mm long, with the matching gilded spade hour hand is not far off. Despite the watch’s intricate complications, the only visual break in this clean and classical dial is the 6 o’clock small seconds subdial, featuring an elegantly thin stick hand and a slightly recessed scale. 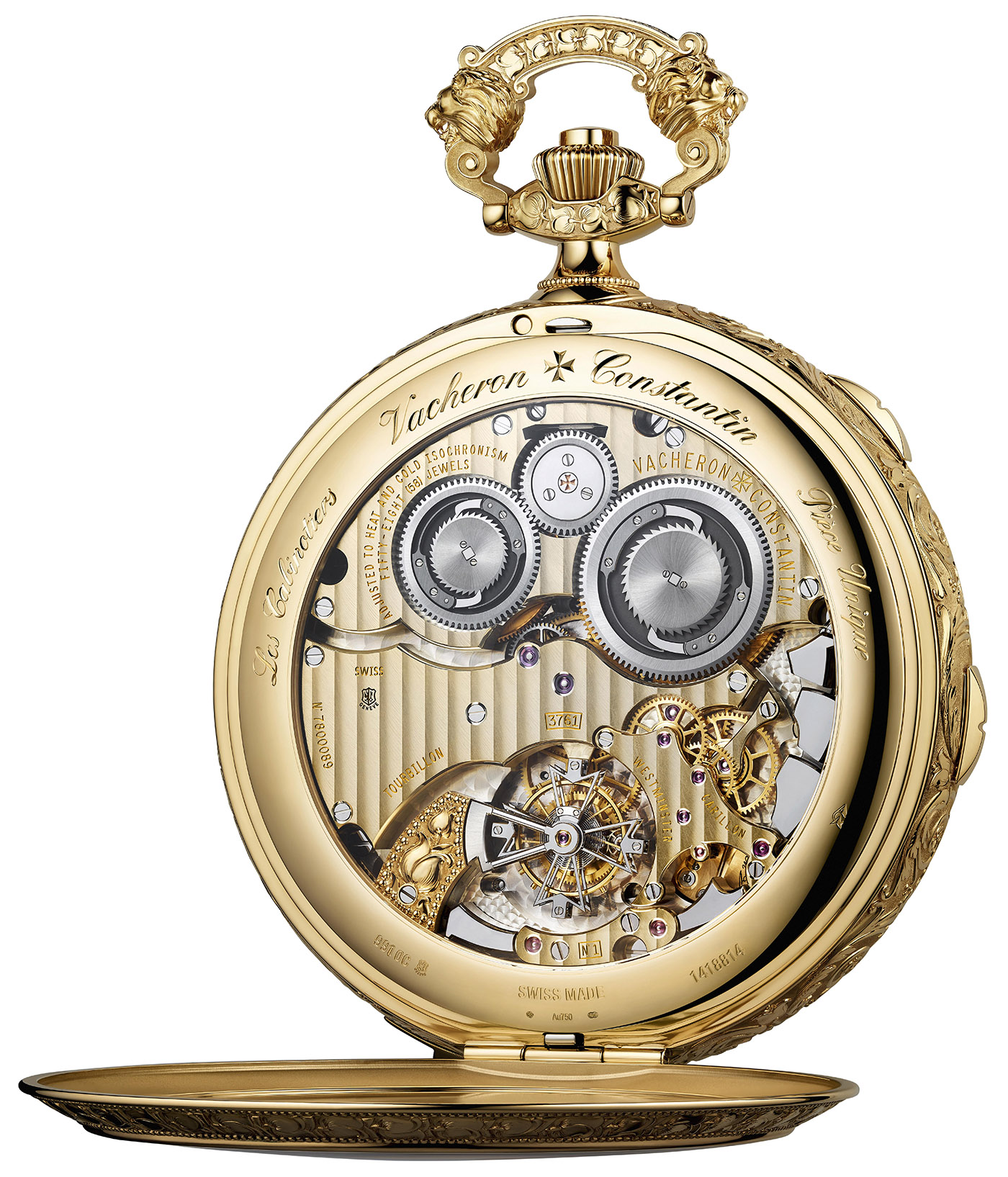 The real complexity of the Vacheron Constantin Les Cabinotiers Westminster Sonnerie Tribute to Johannes Vermeer is revealed through its one-of-a-kind in-house Calibre 3761 handwound movement. It isn’t often that a movement equipped with a tourbillon escapement has this ornate element overshadowed, but this is certainly the case here. Even by the intricate standards of a Grande Sonnerie movement, the 806-piece Calibre 3761 is an immensely complex design. As the name suggests, the watch features a full Westminster chime (the bell chime famously used in London’s Big Ben clock tower) using five separate gongs and five hammers mounted on four racks as opposed to the usual one, plus an additional snail rack for the minute repeater. Beyond this added difficulty, this allows the movement to play unique melodies when striking the quarters, rather than repeating the same base chime. With the use of a case pusher, the movement can be swapped between Grande Sonnerie and Petite Sonnerie functions to give the wearer different chiming options. For example, at 5:45 PM in Grande Sonnerie mode, the chime would play three bars of the Westminster melody to indicate three quarters past the hour, followed by five single notes to signal the current hour. Meanwhile, the Petite Sonnerie mode would play only the three bars of the Westminster chime at 5:45 PM to indicate the quarters, and would only strike the hours at the passing of each full hour (in this case, a full four bars of the chime followed by six notes would be the next strike at 6 o’clock). The minute repeater complication allows the chime to be played at will, striking out the current minutes, quarters, and hours in sequence. Mercifully, a sliding selector at 9 o’clock can alternate the movement between normal chiming, a silent mode, and an innovative “Night Silence” mode which selectively deactivates the chime between the hours of 11 o’clock PM and 9 o’clock AM. 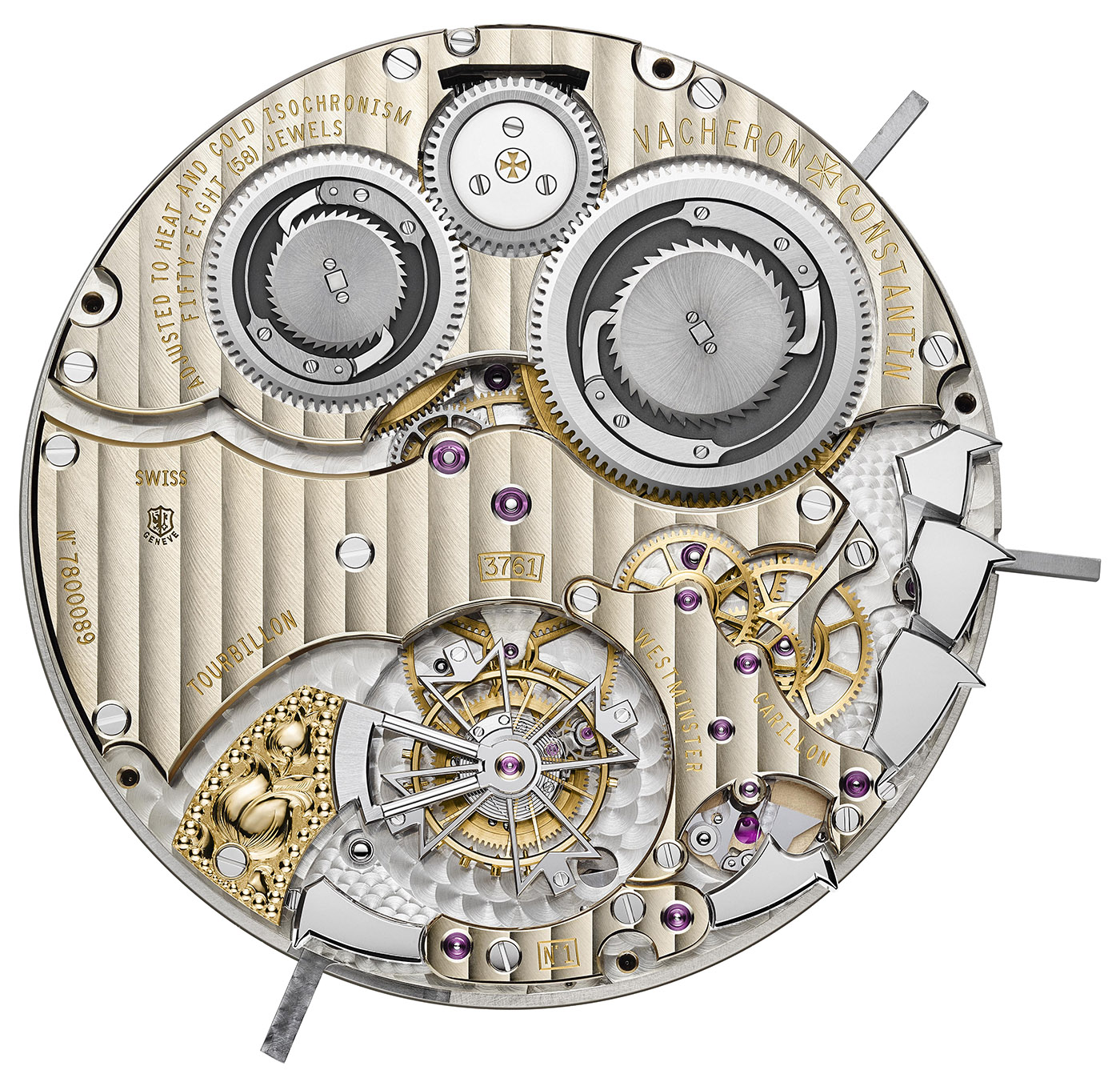 In terms of finishing, the Calibre 3761 is nearly as extravagant in initial images as the watch’s exterior, with gold three-quarter bridges hand adorned with Côtes de Genève and hand polished chamfered edges. The lower movement plate is fully adorned with tight perlage, and each of the five Grande Sonnerie hammers are brightly polished to attract the eye in photos. The visual centerpiece of the movement, however, is the 6 o’clock tourbillon escapement. Fitted to an ornate gold guilloche balance cock with a hand finished tulip and pearl motif, the tourbillon cage itself takes the shape of the brand’s sharply angular Maltese cross emblem, fully skeletonized to maximize the view of the gold gear train beneath. Performance for the Calibre 3761 is slightly less impressive than its finishing however, with an 80 hour power reserve at a steady 18,000 bph beat rate that drops to only 16 hours when the Grande Sonnerie complication is engaged.