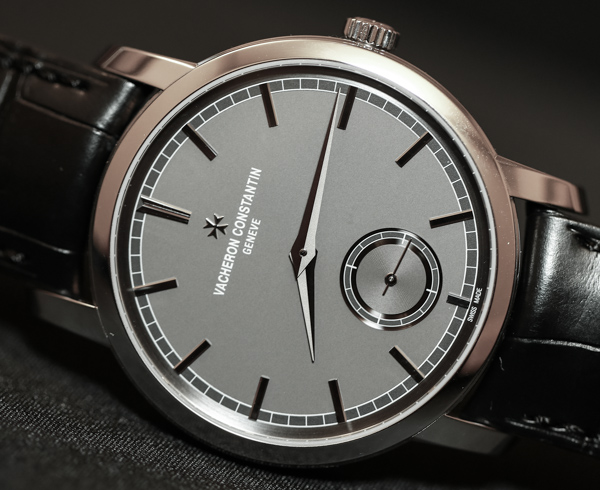 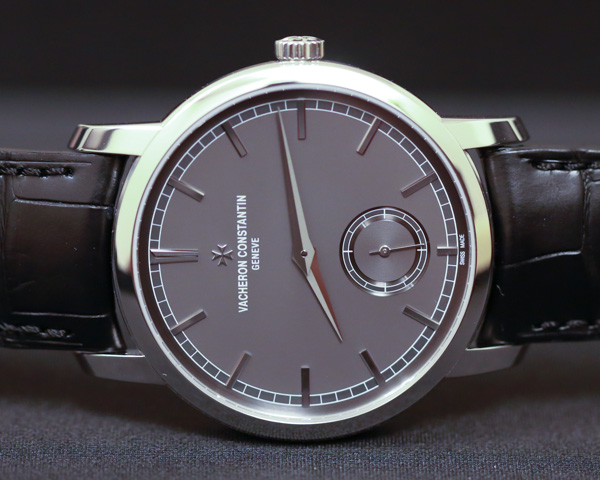 Yea, the fold that divides the hands down the middle has different polishing styles on each side. One half of the hour or minute hand is mirror polished while the other side is satin polished. Again this is another minor detail but is extremely effective in making them look beautiful and it also helps legibility significantly. The hour markers are also applied and given a nice diamond cut polish. It is also important to note that both the hands and hour markers are produced in 18k white gold. Small elements like one of the rings around the subsidiary seconds dial is slightly glossy to match the milky polish of the platinum case and goes well with the otherwise matte-colored gray dial that Vacheron specifically has called “slate grey opaline.”

The Patrimony case itself is a conservative 38mm wide, which wears nicely with the longer, widely spaced lugs. For a dress watch it works very well, especially with its thin 7.77mm thick profile that slides under a sleeve gracefully. We’ve always like the shape of the lugs and the case which at first looks plain, but appears more interesting as you inspect the details. One cool detail is the grooved edge around the screw-down caseback. Attached to the case is a black alligator strap, that used a curved spring bar that gracefully matches the curve of the case – a highly welcome detail. 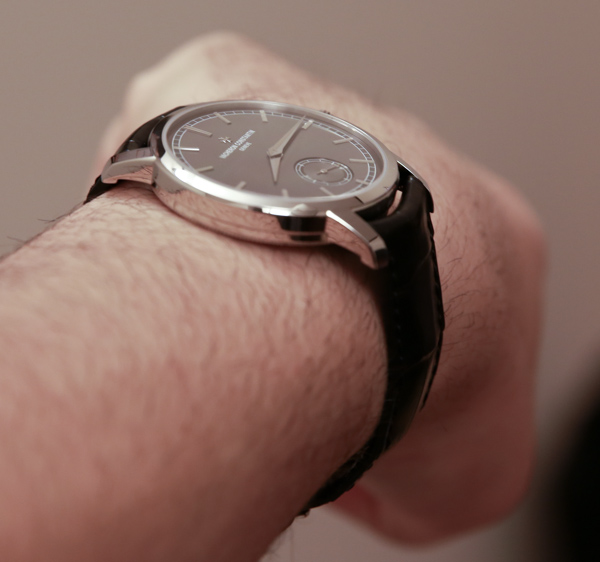 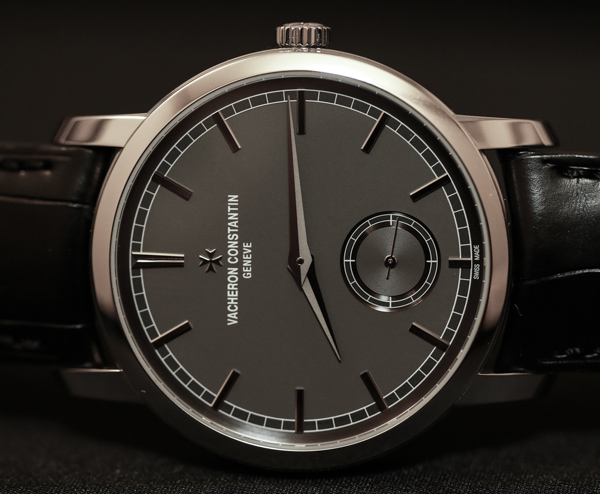 Over the dial as well as the movement, are AR coated flat sapphire crystals. Glare is almost completely absent in the dial, which is what you should expect in a timepiece at this level. Glare reduces our ability to appreciate the dial, and this detracts from a high-end feel – something that Vacheron Constantin and alike brands know. Inside the watch is a simple, yet beautiful in-house made Vacheron Constantin caliber 4400 AS manually wound movement. Probably the most important detail of the 4400 movement is that it is adorned with a Geneva Seal – one that meets the new, higher requirements.

The most modern requirements to place the “Hallmark of Geneva” on a watch include performance standards of accuracy, decoration, production entirely within the canton of Geneva, and a very important measure of movement performance not just alone, but also inside the case of the watch so as to simulate wear. The movement is decorated with Geneva stripes and has a power reserve of 65 hours. What would make it perfect for me is a power reserve indicator located on the back of the watch on the surface of the movement.

Gray offers the Patrimony Traditionnelle Small Seconds timepiece a uniquely regal, yet understated appearance that we think will be welcomed by those interested in a platinum watch. The piece works if you are wearing black or light tones as well, making it acceptable for a range of clothing options. Vacheron Constantin rendered the gray tone well, which helps increase the uniqueness of the watch as gray dialed dress watches are uncommon. Price is $34,000. vacheron-constantin.com