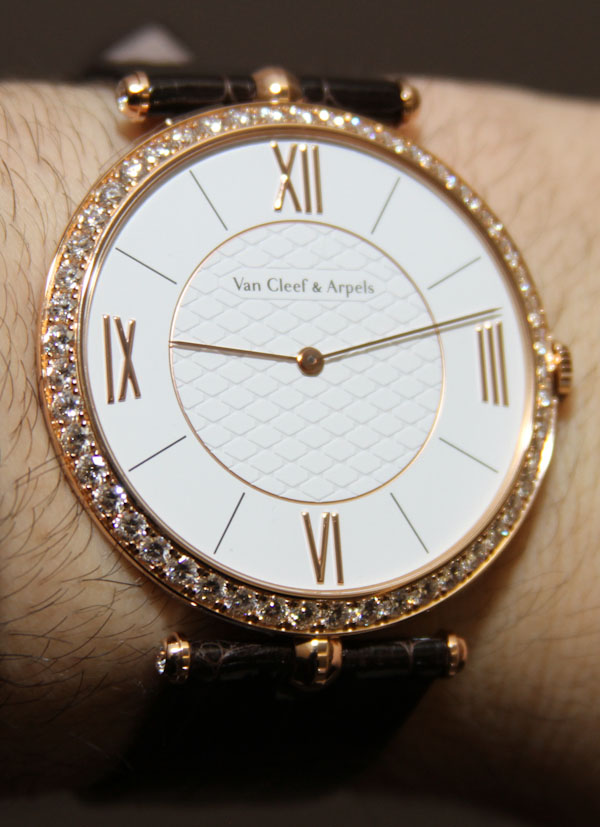 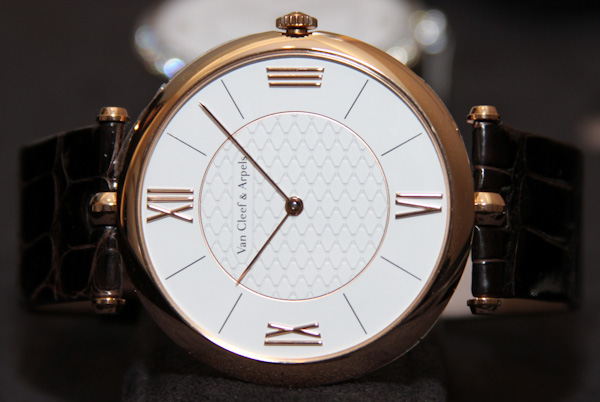 Let me first apologize for failing to get a photograph of an important (to some), yet subtle, detail on this watch. The crown on this new Pierre Arpels watch – on all versions – has an inset diamond. OK, I feel better now knowing that you’ll be aware of that fact despite my incomplete coverage. Now that I’ve glossed over that, let me show you a new men’s collection of watches from Van Cleef & Arpels. That is sure to be a statement you don’t hear very often.

As women’s watches go, Van Cleef & Arpels pieces are beautiful, fun, classy, luxurious, and because VCA will be upset if I don’t mention it, poetic. For men, their offerings have been thin over the last few years. However, I did get a chance to cover the Pierre Arpels Lateral Power Reserve watch from a few years ago here. Aside from some of their higher-end Midnight watch models, there is very little available from the brand for men. Will that change in the future? I don’t really know. Van Cleef & Arpels has stated to me a desire to focus more on men’s offerings but it is hard to say what will actually happen, and when. Nevertheless, here is a new men’s piece from the brand that fits the classy ultra-thin watch model.

The Pierre Arpels watch has been around in some form for about sixty years I believe. This new for 2012 model is a tribute to some of the first models while not being a vintage rehash watch per se. As I said above, this is more Van Cleef & Arpels’ offering to the hot, wide-diameter, ultra-thin classy watch segment. Many big brands are releasing models like this, with guys like Piaget leading the back. Why Piaget? Well probably because Piaget has been making classy ultra-thin timepieces for a really long time. Well before it was a trend or anything like that. That is certainly only of their shticks. It comes as no surprise then that inside these new Van Cleef & Arpels Pierre Arpels watches are Piaget movements. 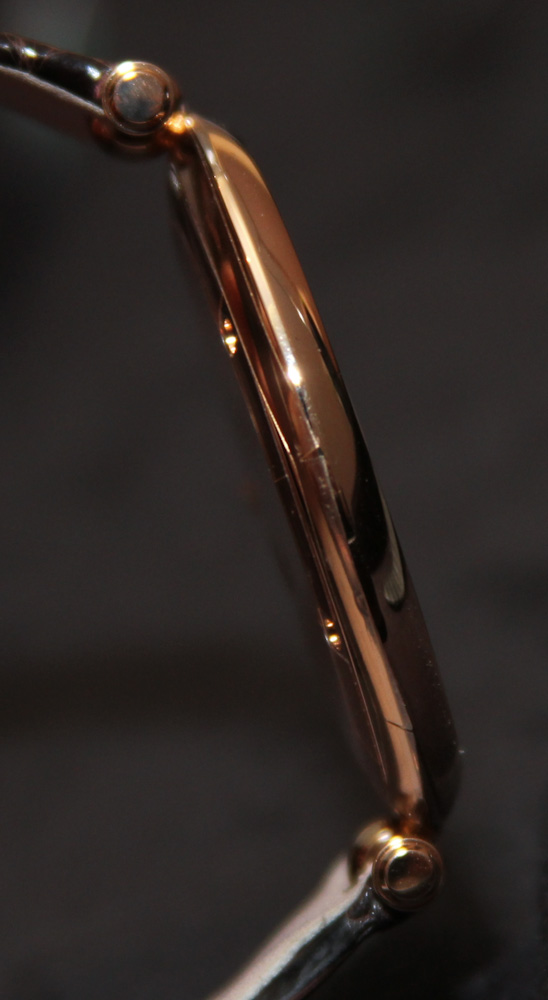 Under the Richemont umbrella, brands like Ralph Lauren and Van Cleef & Arpels rely on proud movement maker Piaget for very slim movements – and there is nothing wrong with that. Van Cleef & Arpels knows what they do well, and instead of trying to reinvent the wheel or make up their own name for what is essentially a Piaget movement, they are correctly making it clear what is in these watches. The specific caliber is the in-house made (quite nicely made actually. You can check out an in-depth article inside Piaget’s movement manufacture here) Piaget 830 P manually wound movement that offers just the time in this piece.

Is it strange for Piaget to be placing their movements in other watches that are also ultra-thin formal pieces? Not really. Piaget started out making only movements and not watches. And, as far as Richemont is concerned, it is positive branding for Piaget and for the marques that contain their movements. So I consider the Piaget movement in the Pierre Arpels watch to be a plus. 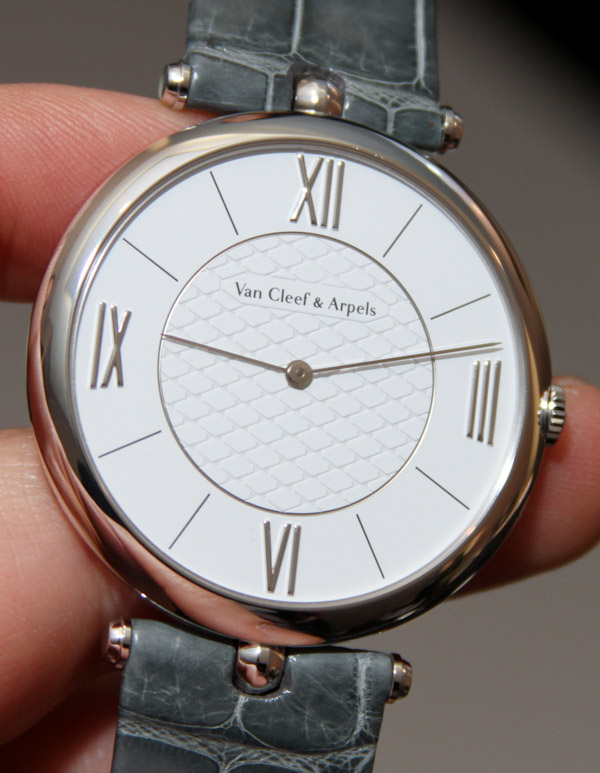 Design-wise, the Pierre Arpels watch is going to be a bit controversial. Mainly because it is a dandy’s watch. That single attachment rod-style lug system is usually found on women’s watches and the entire presence of the piece is a bit delicate. Nothing about the dial is inherently feminine, but it is a “soft” watch that requires a spot on a strong man. This is like the pink shirt of timepieces. Many men can pull it off just fine, but we usually need a woman to nudge it on us in the first place.

The inner part of the white lacquer dial has a sort of stretched honey-comb pattern on it. The texture is nice actually, and reminds me of something soft. Van Cleef & Arpels claims it is the pattern of a black-tie shirtfront, but the more I look at it, the more it looks like the quilted pattern on good toilet paper. Dare I say luxury toilet paper? The rest of the dial has a combo of gold and black applied thin Roman numerals and baton hour markers. The needle-like hands are a good match. Legibility is high and the gentle assortment of colors and textures feels proper. 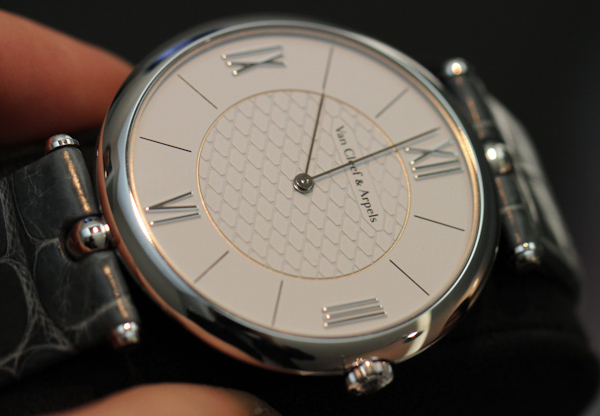 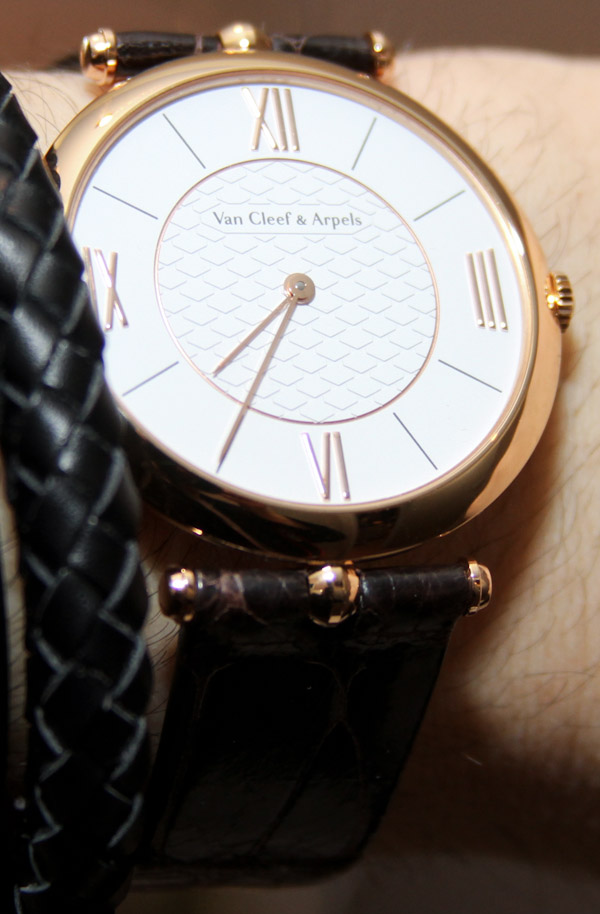 Two case sizes and two materials are available for the Pierre Arpels watch this year. Van Cleef & Arpels is offering a 38mm wide and 42mm wide version of the piece in both 18k pink gold and 18k white gold. Each version is also available with a diamond-lined bezel. I have a feeling the East is going to be gobbling most of those latter pieces. Personally, I don’t have much interest in the 38mm wide size. A lot of ladies will enjoy that piece. The 42mm wide size is pretty much what a man wants, and on my wrist I liked it. As far as the specific thickness of the case goes, I am not precisely sure, and it doesn’t really matter. When it feels thin, it is thin.

The case itself has some interesting construction details. They are subtle, but the case isn’t just two thin pieces of gold sandwiched together. Overall, this is not a bold watch in the modern sense, but certainly is a classy wrist companion which makes good use of the Van Cleef & Arpels name (and Pierre Arpels history and persona). The thin alligator straps do complete the presentation and I look forward to more male-mindedness in Paris at Van Cleef & Arpels. Prices ranges from $15,500 – $41,500.