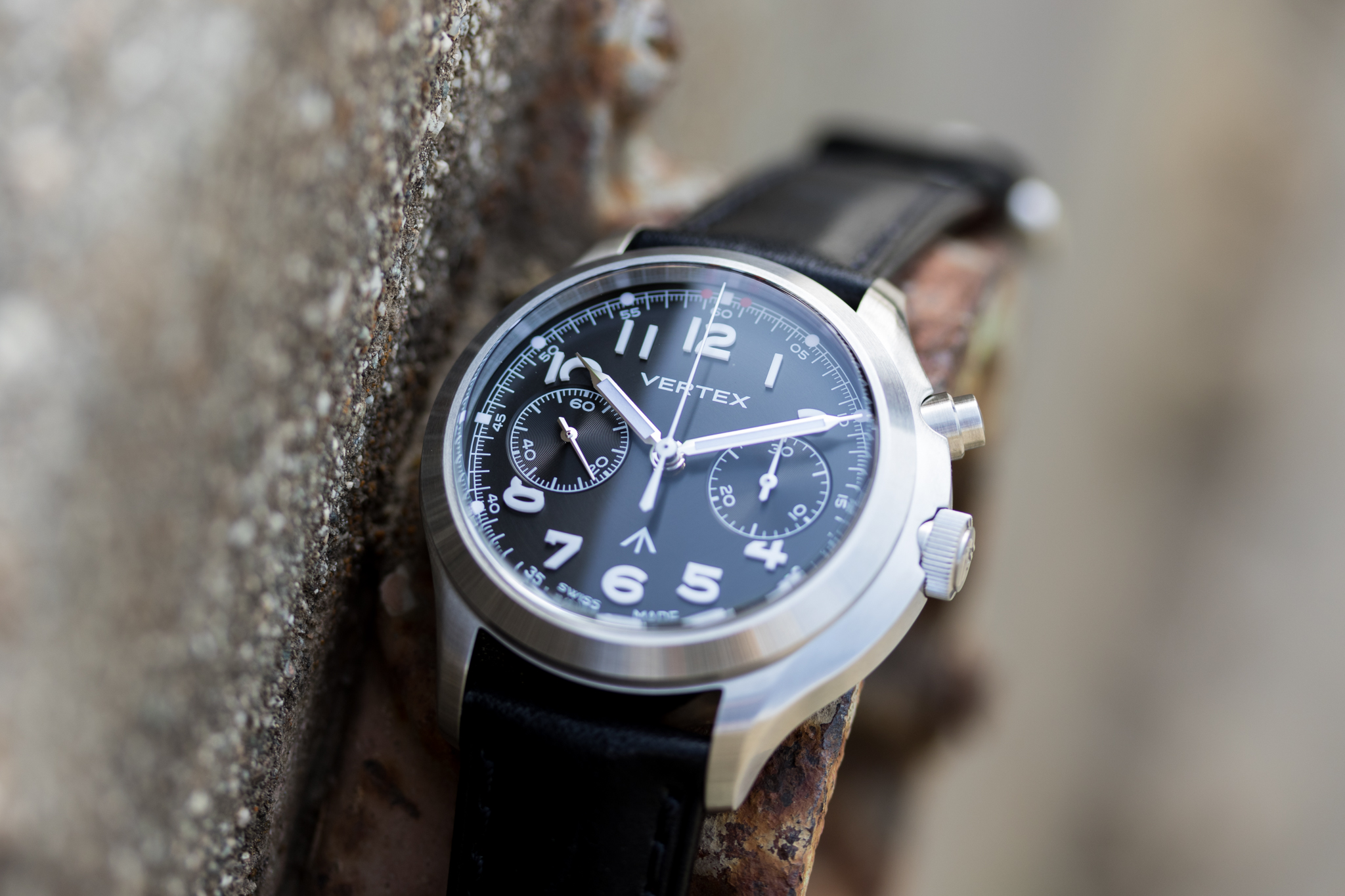 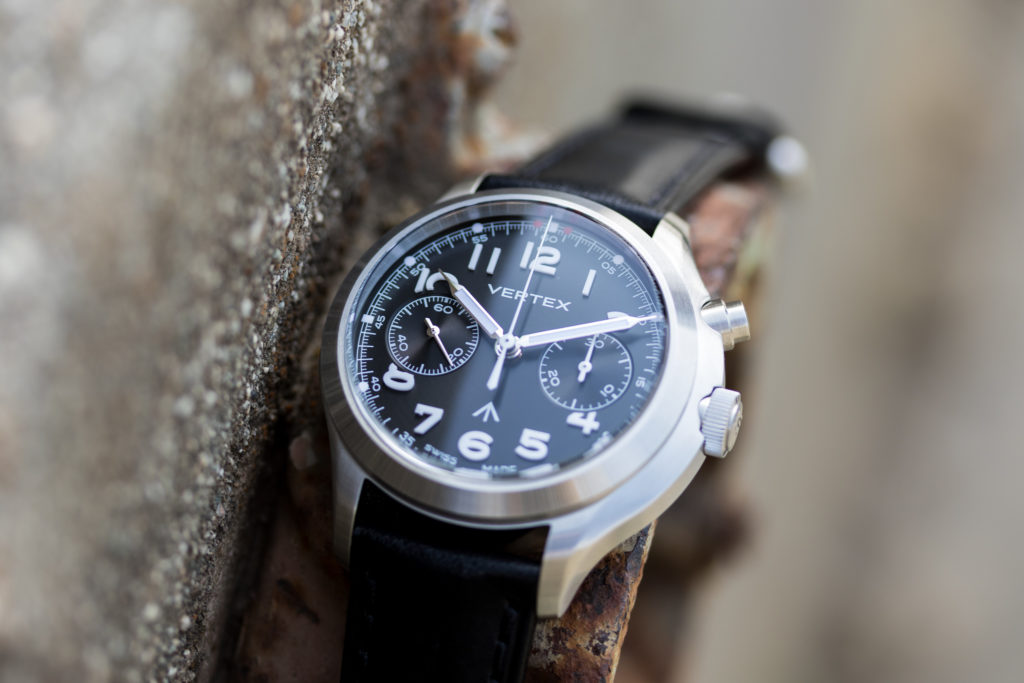 So what has crow’s feet,  served in the British military during WWII, and has a heartbeat? Vertex Watches, of course. Who did you think I was referring to? Anyway, whomever you might have thought I was talking about, the King and his Ministry of Defence did commission 12 Swiss watch manufacturers to produce the W.W.W. (Wrist, Watch, Waterproof). These were field watches made for foot soldiers, the original “Dirty Dozen” (there’s a Quentin Tarantino movie in there somewhere), one of which Vertex re-released as a modern interpretation of the original, as the M100. The aviator’s MP45, on the other hand, was a timepiece that never soared the blue skies or saw time in battle and was ultimately shelved, until 2018, when it was introduced at Salon QP.

The MP45, (MP=mono-pusher, 45=year of commission) is unmistakably Vertex, starting from its all satin-brushed stainless steel case, Super-LumiNova-molded Arabic numerals, syringe hands, broad arrow marking, and double red dots at 12 o’clock. Aside from its bi-compax dial layout and a few extra hands, the most striking physical divergence from its little sibling, the M100 and M100B, would be its asymmetrical case shape and a metal growth at 2 o’clock. 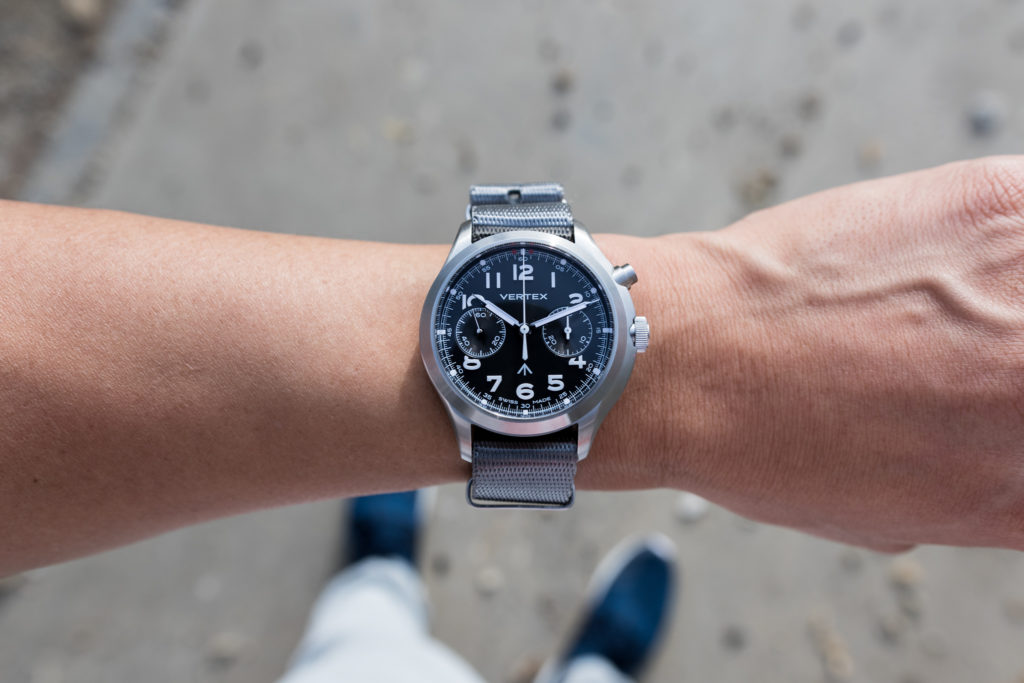 The case’s voluptuous right side reminds me of a ¾ portrait view of a cobra’s head. In fact, with the watch on the provided black leather strap with red underside, it’s actually hard for me to not imagine Cobra Commander — which is kind of sad since the “Dirty Dozen” watches were given to the good guys. Nonetheless, it’s an asymmetrical case that I find visually appealing and easy to wear on the wrist, despite its tendency to be slightly top-heavy, especially on a NATO strap, but more on that later. 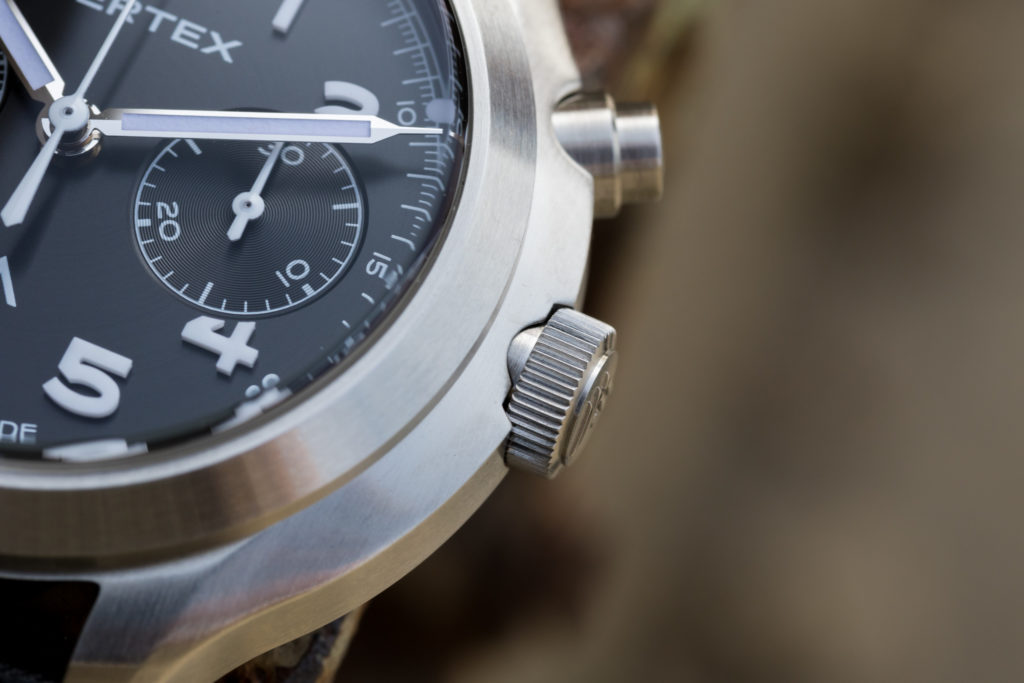 With an inset crown and a black lacquer-capped mono-pusher button, it feels ergonomic when static on the wrist and when the mono-pusher is engaged. The crown’s design reminds me of the cap off a military water canteen, sans connecting metal chain, and the pusher itself resembles the tactile buttons on a military vehicle instrument panel. As a set, it even looks like a trench lighter with the crown as the spark wheel and the mono-pusher as the cap for the wick. 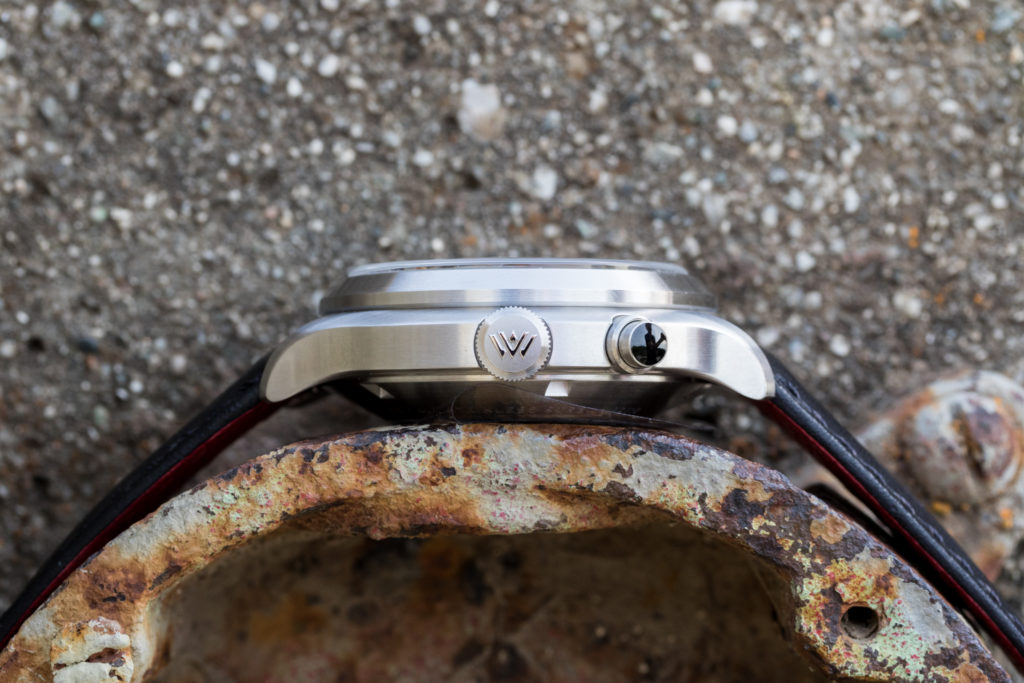 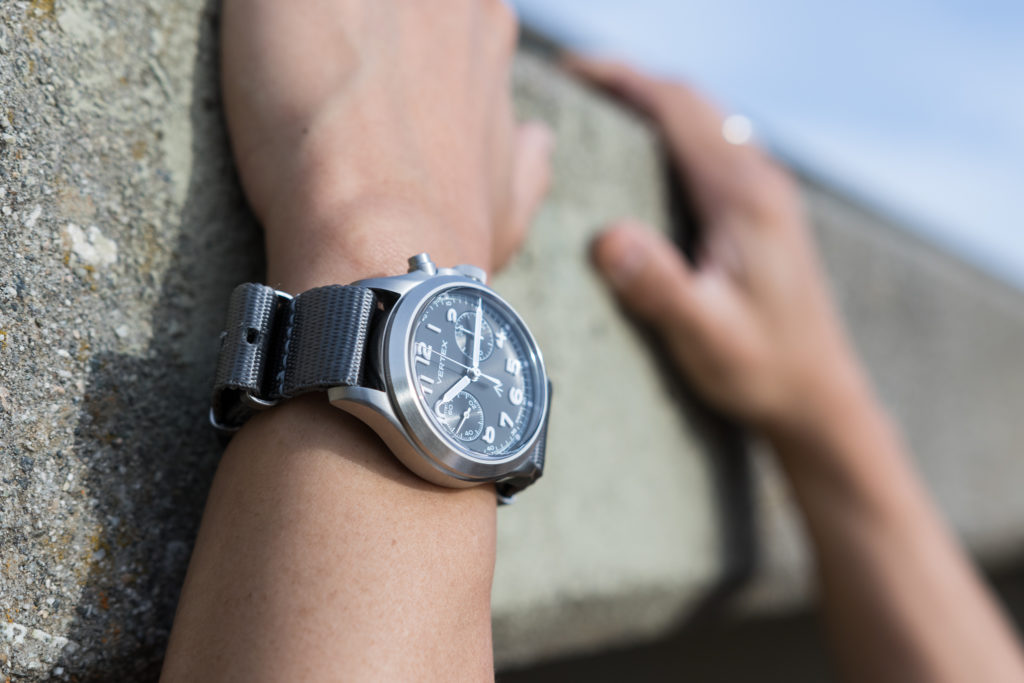 Overall dimensions are a vertical 49mm lug-to-lug and a horizontal case diameter of 44.5mm, including the crown, measured with my digital calipers; strap width is 20mm. The lugs curve down sharply, making the watch feel and look smaller than its measurements on my 6.25-inch wrist. The width never caused the crown to dig into the top of my hand when articulated in 90-degree angles. Strap width is an accessible 20mm, and the water rating is 100m, which is fine for a normal person like me. 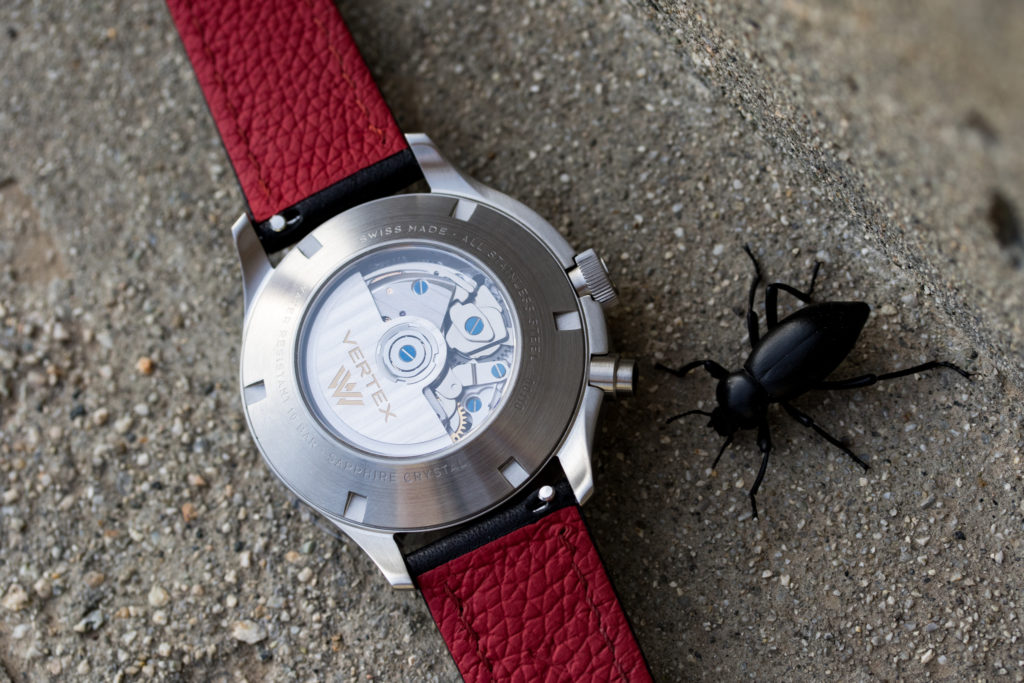 The all-new Sellita SW510MP powers the MP45, both in automatic and mechanical builds, and based on the time I had with the watches, the movement felt precise and tactile. Changing the time is smooth and, while the prototype version of the mechanical watch that was in my possession had a bit of gear lash, causing the hour hand to jitter during the initial crown movement when adjusting the time, the production version had very little play with regard to the automatic movement. I assume that the mechanical movement in the production watches would have also remedied the issue. 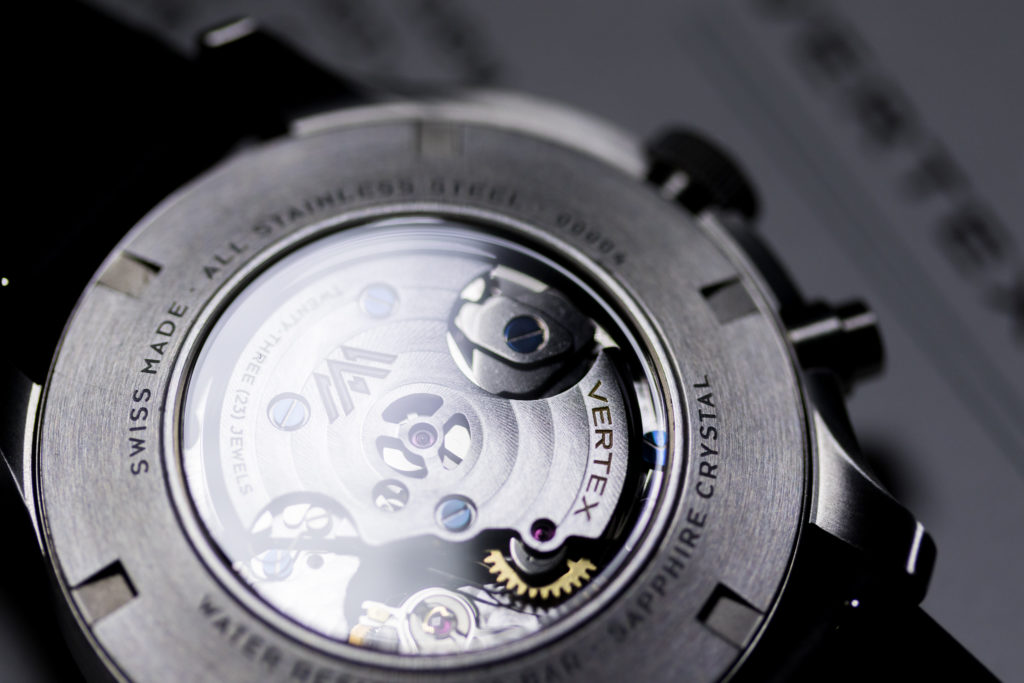 I’ve been a fan of mono-pushers since I seriously got into watches, which was about the time the Montblanc Rieussec watch came out. Mono-pushers seem more practical than your standard two-button configuration for real-world purposes. Sure the two-button configuration is better for split time, faster actuation, and regattas, because we all spend time at yachting events on the regular. But for a simpler man, the mono-pusher allows me to time my coffee-steeping times and interjects my countless hours of sitting in front of a computer by timing my two-minute wall-sit exercises.

The movement is nicely finished with the rotor and backplate being finished in Côtes de Genève and the rest of the main plate in perlage. The blued screws are a nice touch on a production-based workhorse movement and can be seen throughout. The chronograph mechanism is clearly visible from the back and interesting to watch as the mono-pusher lever is engaged. The crown stem indents and is clean and crisp, and the mono-pusher actuation is a “clunky” 1:1 without much “mushiness,” which is a good thing from my perspective. 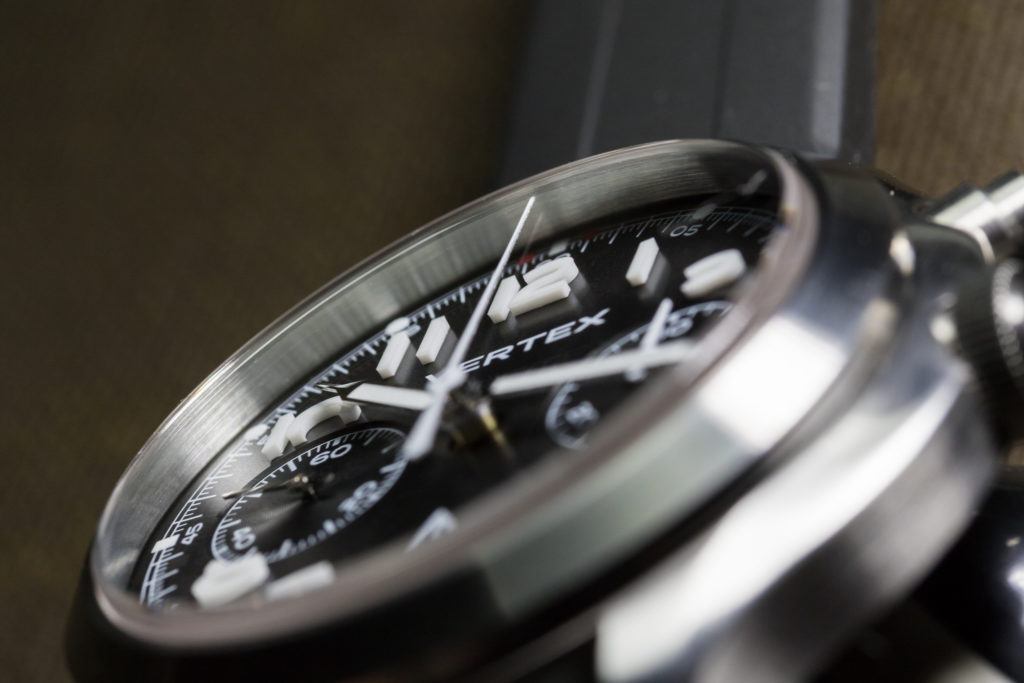 When you see a Vertex watch for the first time, you may not notice the dial right away but you’ll be quickly enamored of it — specifically, the molded Super-LumiNova Arabic numbers, which are precisely set into the watch (versus painted, glued, or printed-on markers). The MP45 has chalk-white Arabic markers instead of the slightly green-tinted markers previously seen on the M100 variants, which make them highly legible. 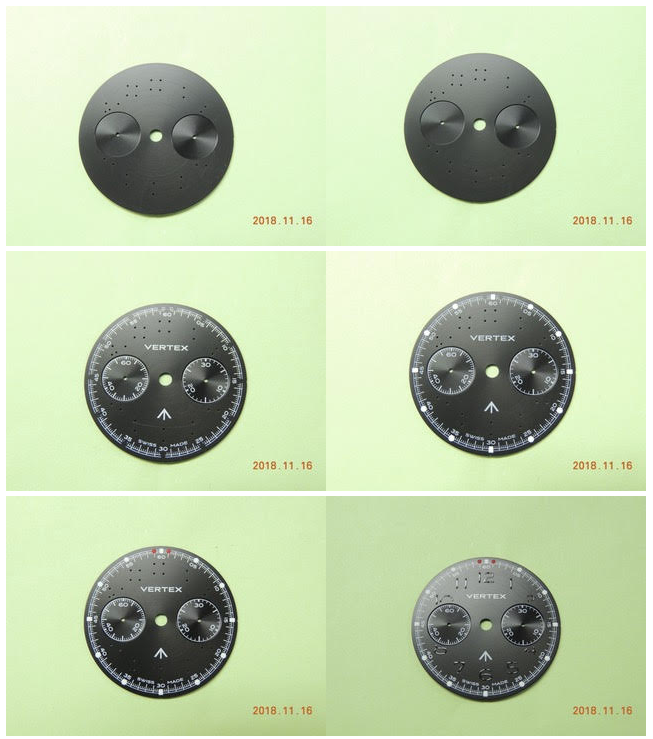 To make a dial like this takes many steps. I spoke with Don Cochrane, owner of Vertex Watches, who indicated that the the dials are also hand-turned. He was also kind enough to send me images of the different phases of a dial being made and the detail that goes into making all the pieces fit together. On another visual note, I had to chuckle after looking at images 1 and 2 as they remind me of a Funko Pop! version of Jason Voorhees’ hockey mask.