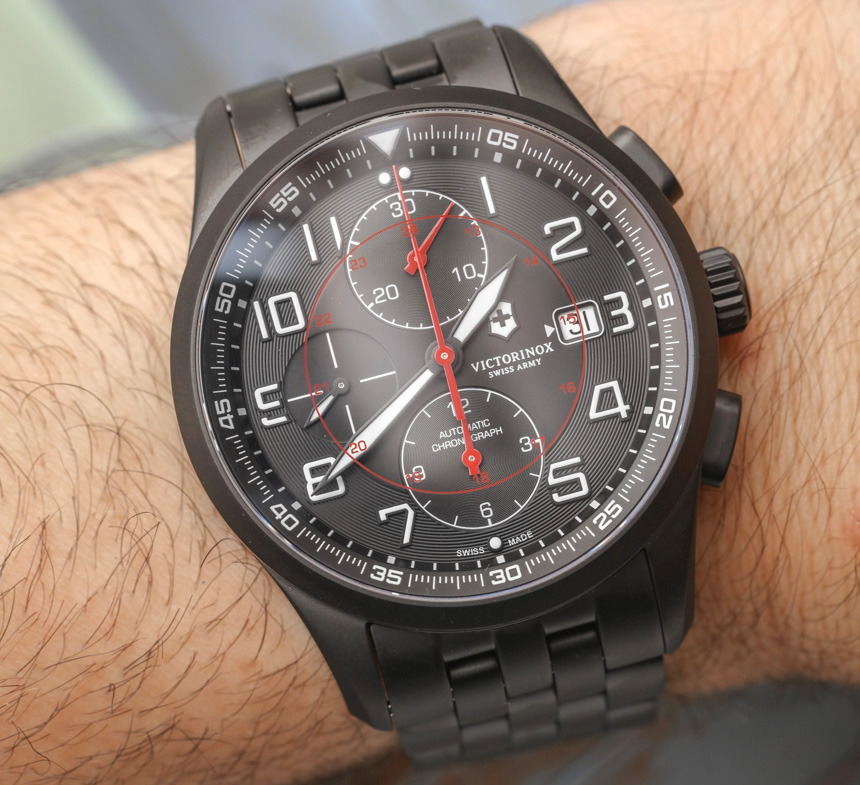 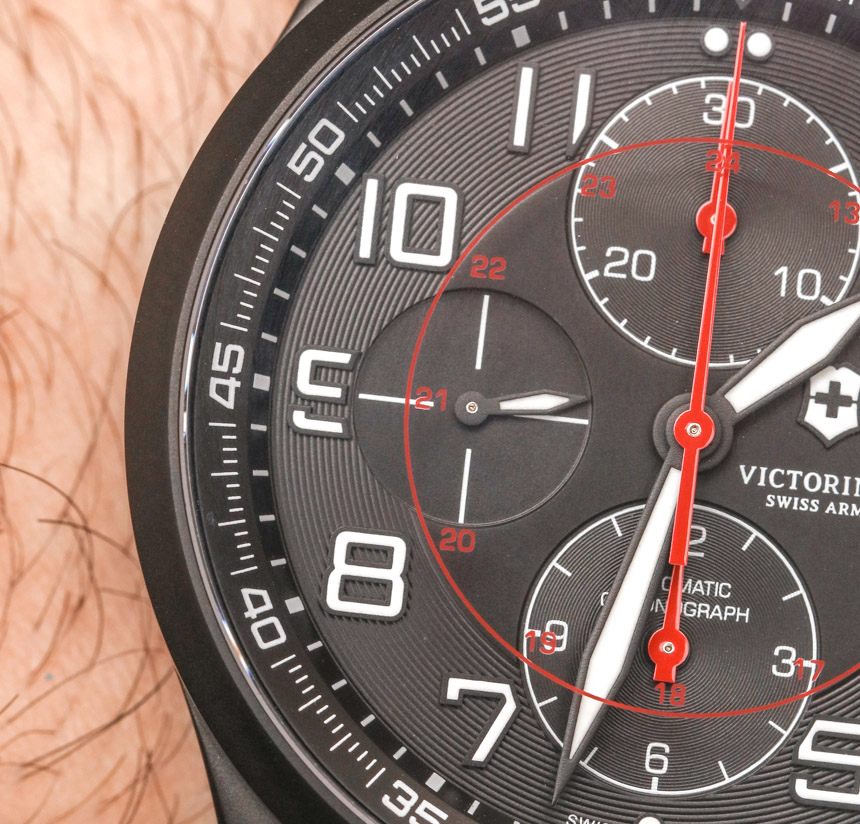 I’m a big fan of the dial design on the Victorinox Swiss Army Airboss Mechanical Chronograph Black Edition. In my opinion, Victorinox Swiss Army strikes the right balance between simple readability and decorative style. It also employs a few ways of creating depth, which is very important in a good watch. First is the angled flange ring which goes around the periphery of the face. A series of scales for the seconds, hours, and minutes are placed here, along with a lumed triangle at 12 o’clock. 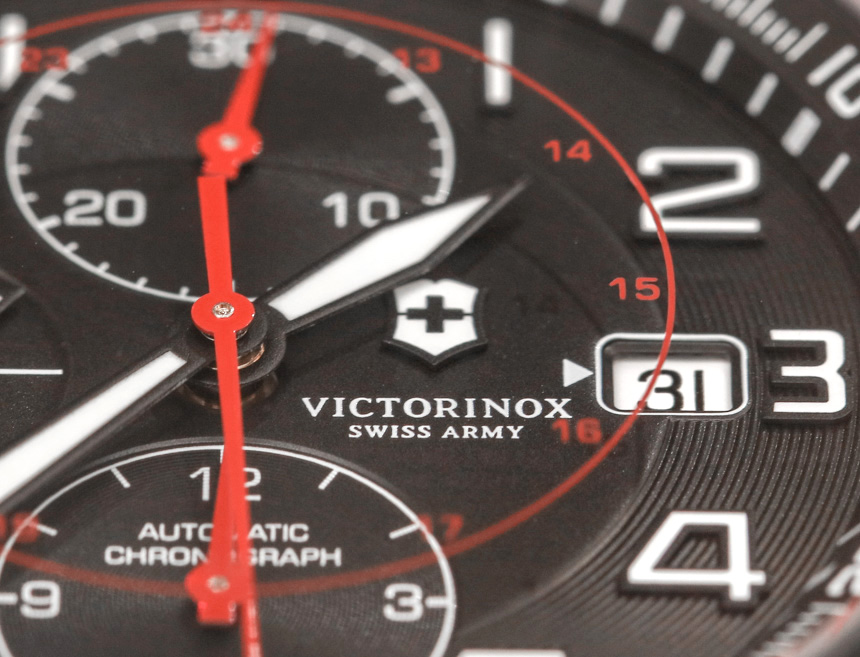 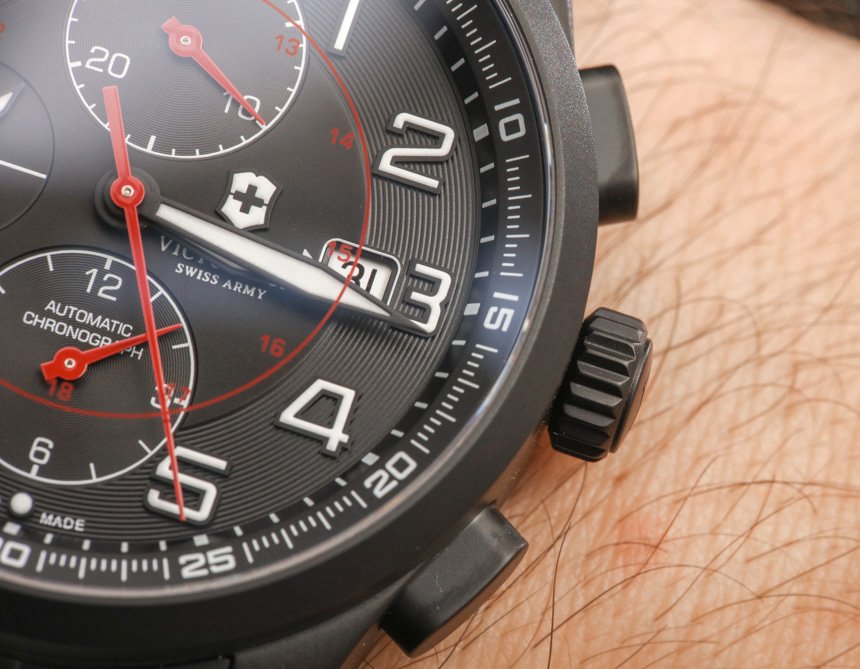 Moving inwards, you have the applied hour markers which are mostly Arabic numerals and pretty much all easy to read. The luminant in the hour markers further creates color contrast which allows them to be easily read in tandem with the very easy to see pilot-style hands. Some people might complain that the subdials cut off the 3 and 9 o’clock hour markers, but it doesn’t bother me. What is important is that the proportions and use of space on the dial (in addition to legibility) are well-nuanced and refined. 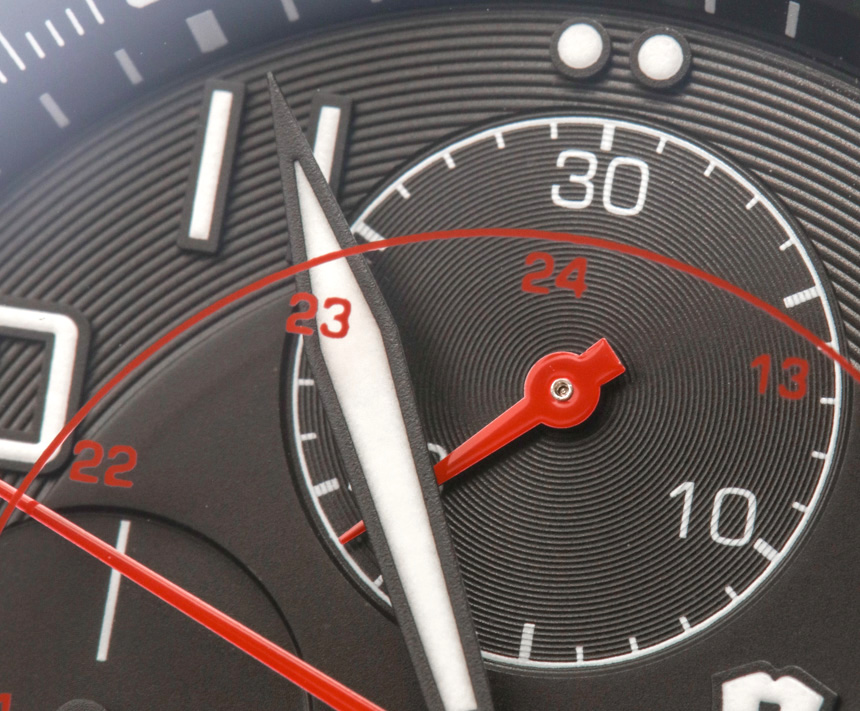 Victorinox Swiss Army adds a bit more red color accents by using the hue for the chronograph hands. The addition of the color looks attractive, and it also has a functional value given that the chronograph hands and time hands are in different colors. Note that even the running seconds subdial hand has luminant applied to it – which is a nice detail. Perhaps the only real downside (for me) of the red 24-hour scale on the underside of the sapphire crystal is that the line cuts through the date indicator window. It’s not that big of a deal, but at the same time, it isn’t an ideal design decision. 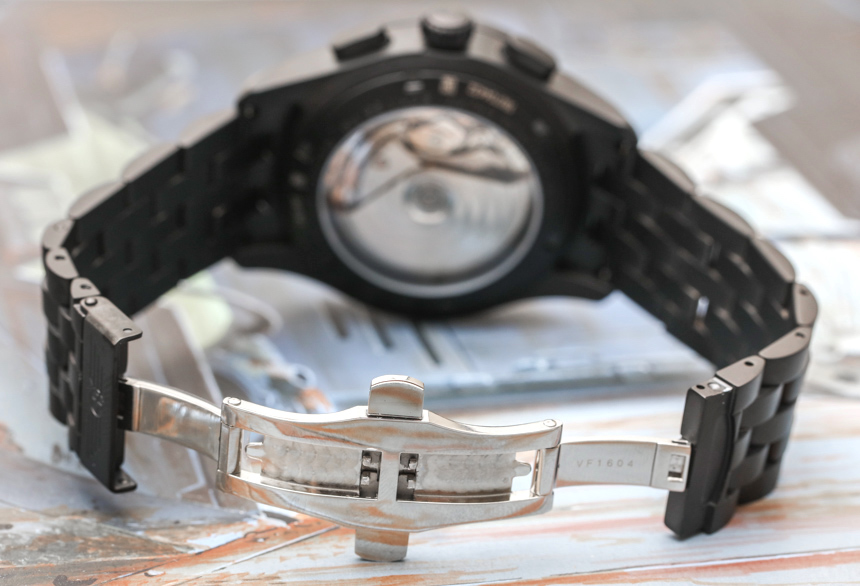 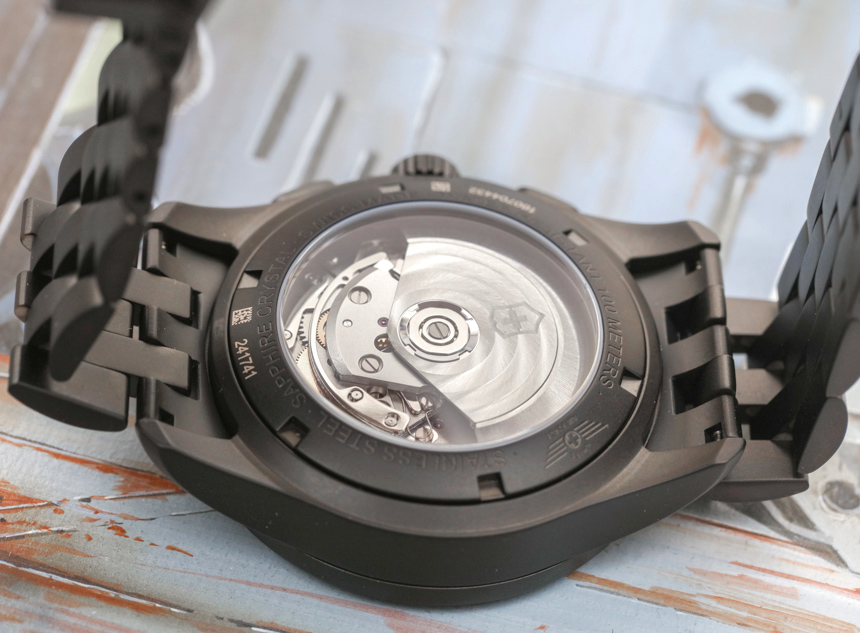 Inside the Victorinox Swiss Army Airboss Mechanical Chronograph Black Edition is a Swiss ETA Valjoux 7750 automatic movement. It’s a base movement without any decoration, but there is a nice custom Victorinox Swiss Army automatic rotor with some nice circular polishing on it. I do like the rectangular rounded chronograph pushers which help the overall design look its best. 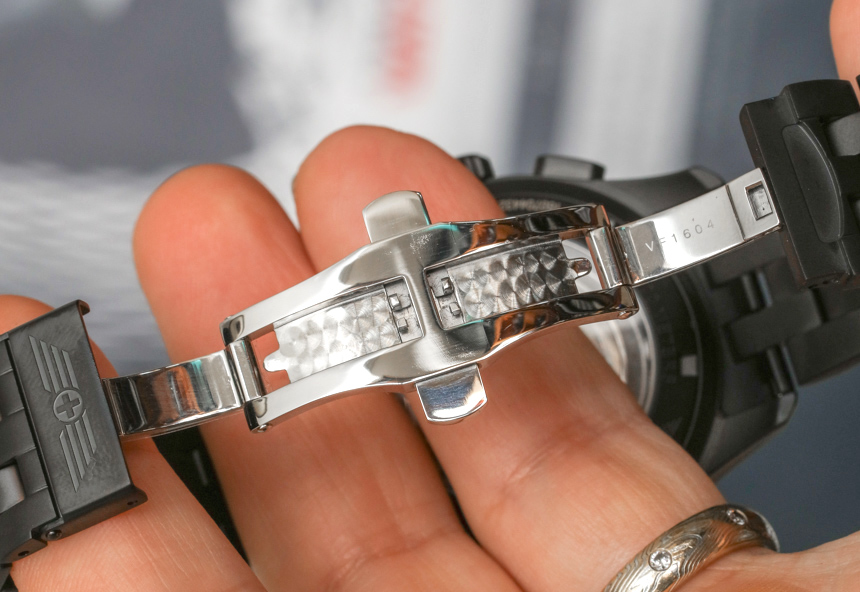 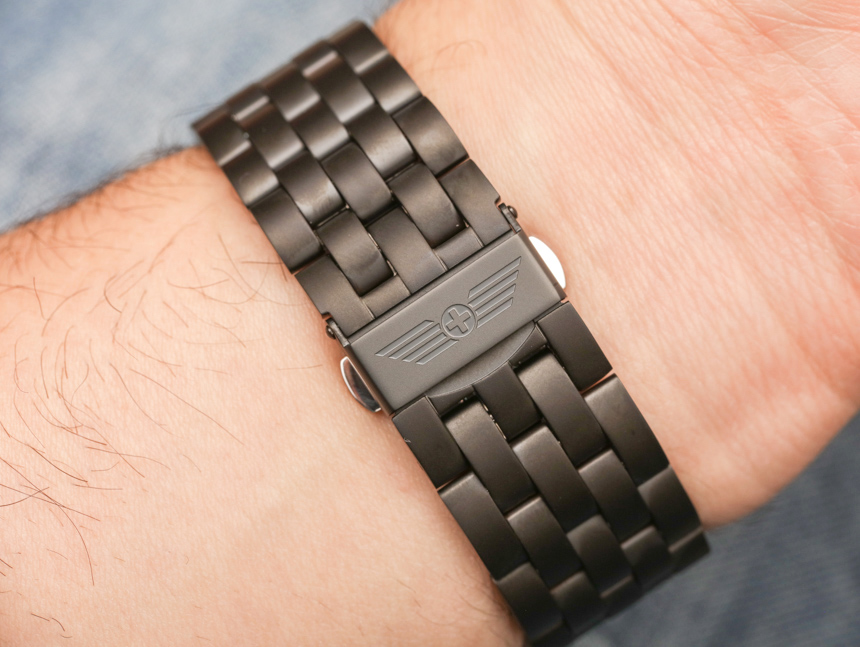 The five-link matte black steel bracelet is comfortable and closed with a butterfly-style clasp. It is a more simple clasp design that is more about looks and style than durable functionality. Victorinox Swiss Army could have made a more secure “activity-style” deployant, but it would have added size and bulk to the underside of the bracelet. 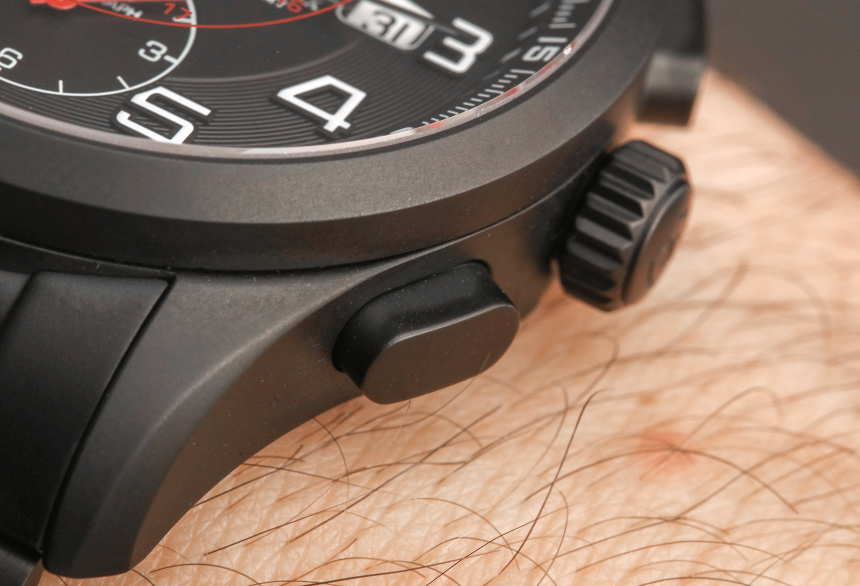 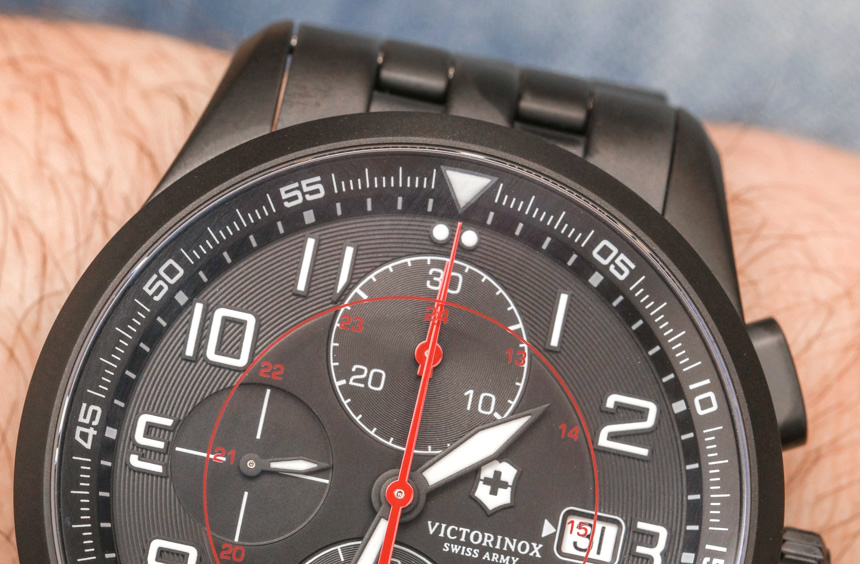 Anyone attracted to the design of this watch will also enjoy the solid construction and a reasonable price. Victorinox Swiss Army doesn’t break any new ground here, but this a great assortment of design elements, functionality, and value. Price for the reference 241741 Victorinox Swiss Army Airboss Mechanical Chronograph Black Edition is $2,350. swissarmy.com

Necessary Data
>Brand: Victorinox Swiss Army
>Model: Airboss Mechanical Chronograph Black Edition reference 241741
>Price: $2,350
>Size: 42mm wide
>Would reviewer personally wear it: Yes.
>Friend we’d recommend it to first: Military-style watch lover who likes the idea of wearing one of Victorinox Swiss Army’s top-shelf timepiece products.
>Best characteristic of watch: Manages to be conservative and cool at the same time, with a lasting appeal that lends itself well to a sole timepiece or one that will be worn for a long time. Good combination of size and wearing boldness.
>Worst characteristic of watch: Red ring under sapphire crystal will not be to everyone’s tastes. Even though this watch is a decent value, the price will cause some enthusiast consumers to start to shy away from more mainstream brands like Victorinox Swiss Army.