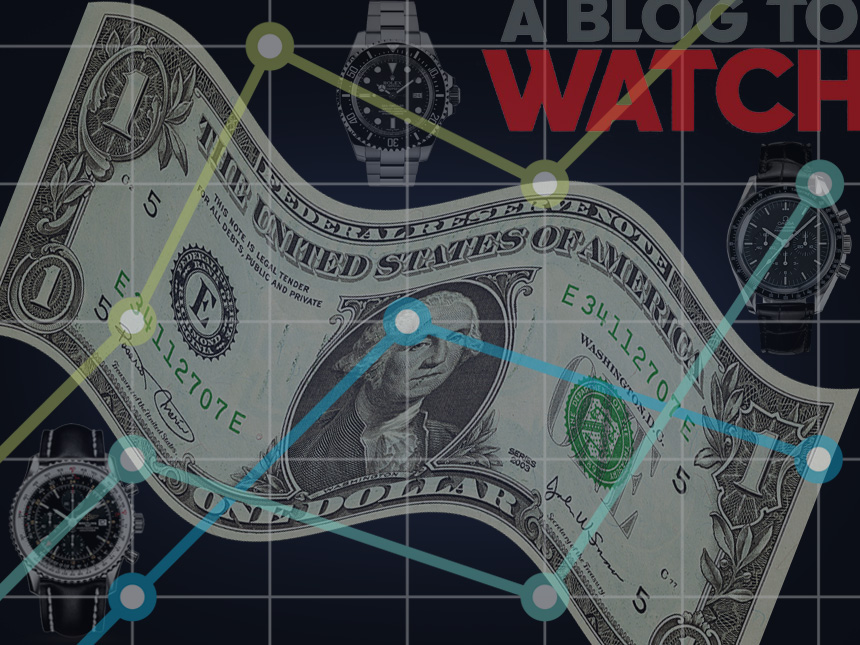 Despite increased efficiency in production, many other factors contribute to increased costs. These are not specific to the watch industry, rather general factors that typically contribute to increasing costs of production: increases to wages, labor laws, increasing legal costs in a litigious world, the costs of medical care, taxes, more sophisticated equipment, sophisticated R&D and related staff, increased marketing, technology purchases, growing pension pools of workers, energy efficiency and emissions law compliance, and even building a factory costs significantly more today than 30 years ago.

In the last article (part 1), I referred to the Consumer Price Index, which is also used to measure inflation of consumer goods prices. It is a common misconception that the CPI also accounts for all increases in the cost of production. The Consumer Price Index is based on a “basket of goods” and changes in their price – it is only representative of relative purchasing power. Some industries produce goods that increase in price faster than others due to technology, cost of labor, R&D, and cost of production. This is not to mention boutique stores, their overhead costs, and associated real estate. They are their own source of overhead costs.

I used this example in the last article too: even when adjusting for inflation, a 2016 Ford Mustang Coupe costs twice as much as it did in 1984. Sure, it has great features now, better safety, a scientifically engineered efficient engine, and lots of cool computers. Despite all these costly improvements, if people weren’t willing to pay double for a Mustang, then there wouldn’t be a Mustang today. Ford didn’t take production efficiency gains on the 1984 model and turn those into 75% profit margins! Rather, the money saved in production efficiency goes into R&D, fancy systems in the car, marketing, etc., and in fact, their profit margin is still small (probably smaller than in 1984, but I am only guessing). The reason for the price increase (even when adjusting for inflation) is that it just costs relatively more to manufacture the car and operate the business than it did in 1984. The same appears to be true in the watch industry based on the profit margins decreasing, not increasing. None of this is a new phenomenon, rather it is the effect of increasing wages as labor becomes more valuable. The Swiss visited America in 1876 (yes, way back then) to take a look at the American watch industry spearheaded by Waltham Watch Company. They noted in their report that efficiency of production through an assembly line made the production of watches in America possible at all. The Swiss author goes on to say that costs of labor in America would be too high to afford producing watches if they didn’t have machines (see page 13 or below). This is because the industrial revolution in America had led to the increased value of each worker (see excerpt below).

From a translation of the 1876 Swiss report by Jacques David, translated by Richard Watkins.

The same is true today. We have machines, but those machines bring with them their own explicit and implicit costs. All of these factors must be accounted for in the price of a product. In fact, without the increases in efficiency due to automation, many industries would not survive due to costs incurred outside of the actual production process.

Many of the Watch Companies are Owned by Publicly Traded Companies

As a result, it’s no surprise that watch prices went up through the years as customers kept paying those prices and buying watches. While the customer hates price increases, the investor loves the resulting earnings (and they are probably also some of the same people buying the high-priced watches). Therefore, the view of watch price increases depends on which side of the equation you find yourself at the time. While watch companies have to be customer-focused, they also have to be shareholder-focused as well. A. Lange & Sohne is owned by the Richemont Group, a publicly traded company

Public companies have shareholders and are accountable for the performance and the share price of the company stock. Investors buy that stock and expect the company to perform in the short and long term. Therefore, quarterly, semi-annual, and annual reports are always not far from the CEO’s mind as the company works to increase returns for investors. Generally speaking, whenever a company misses an earnings target, the stock suffers. Therefore, the easiest way to boost short-term earnings is to increase the retail price of products by a few percent. The extra money goes straight to the bottom line profit.

Market prices drive price increases. When a majority of the market increases the price, the substitution effect means the whole market benefits. Not all of the watch brands are owned by publicly traded companies but most are. A few examples of exceptions that remain private are Rolex, Patek Philippe, and Audemars Piguet. Private companies have the freedom to not worry about short-term financial results as much, but they are still in a profit-generating business and will increase prices when the market allows. Collectors don’t like paying more for watches, but they also wouldn’t like it if Rolex slashed their prices by half either. If Rolex dropped the price of a DateJust to $3,000 today, watch enthusiasts would decry this move for devaluing the current watches they already own – nobody will pay $6,000 for a used DateJust when a new one could be bought for $3,000. With homework, you can get a good deal on a watch like the Rolex Datejust if you buy vintage.

In reality, part of the reason people buy a nice watch is because it’s an “investment.” The incentive to buy today is knowing the price will go up tomorrow. As a result of the price increases, the value of your used watch is partially retained. A 20-year-old vintage Rolex model with millions of identical twins (I’m speaking of non-rare versions such as a simple Rolex DateJust) commands more than the owner originally paid for it 20 years ago, sometimes commanding even higher than the inflation-adjusted purchase price. This is because consumers still want a Rolex DateJust, but they can’t afford a newer, higher-priced Rolex DateJust so they pay a little less for an older model. The seller of the older Rolex DateJust might make a profit on the sale (from what they paid for it 20 years ago). At a minimum, the Rolex watch is generally worth near what was paid for it after adjusting for inflation.

Other Reasons (i.e., all those macroeconomic factors)

This article is not all-inclusive, nor was Ariel’s 2010 article. However, both other a variety of reasons why prices have increased. There are many other reasons that watch prices have gone up including:

These are all important to consider, but for the sake of length, I will save them for future analyses. Yes, even real estate prices get a vote

Prices have increased even when controlling for inflation, but the price increases are driven by many factors. There is no doubt a growing rift between what companies are selling watches for and what customers are willing to pay; this is evident in the decrease in watches sold. The reasons for the customer’s decreasing willingness to pay is the topic of the next article (because this topic is a large one, I have broken it into four parts instead of three). And finally, in the fourth and final article, I will use company financial situations to show why significant price decreases wouldn’t change much and why we are unlikely to see them anytime soon. Stay tuned for Part 3 where I will talk about why customers’ willingness to pay increasing prices for watches has taken such a drastic turn…