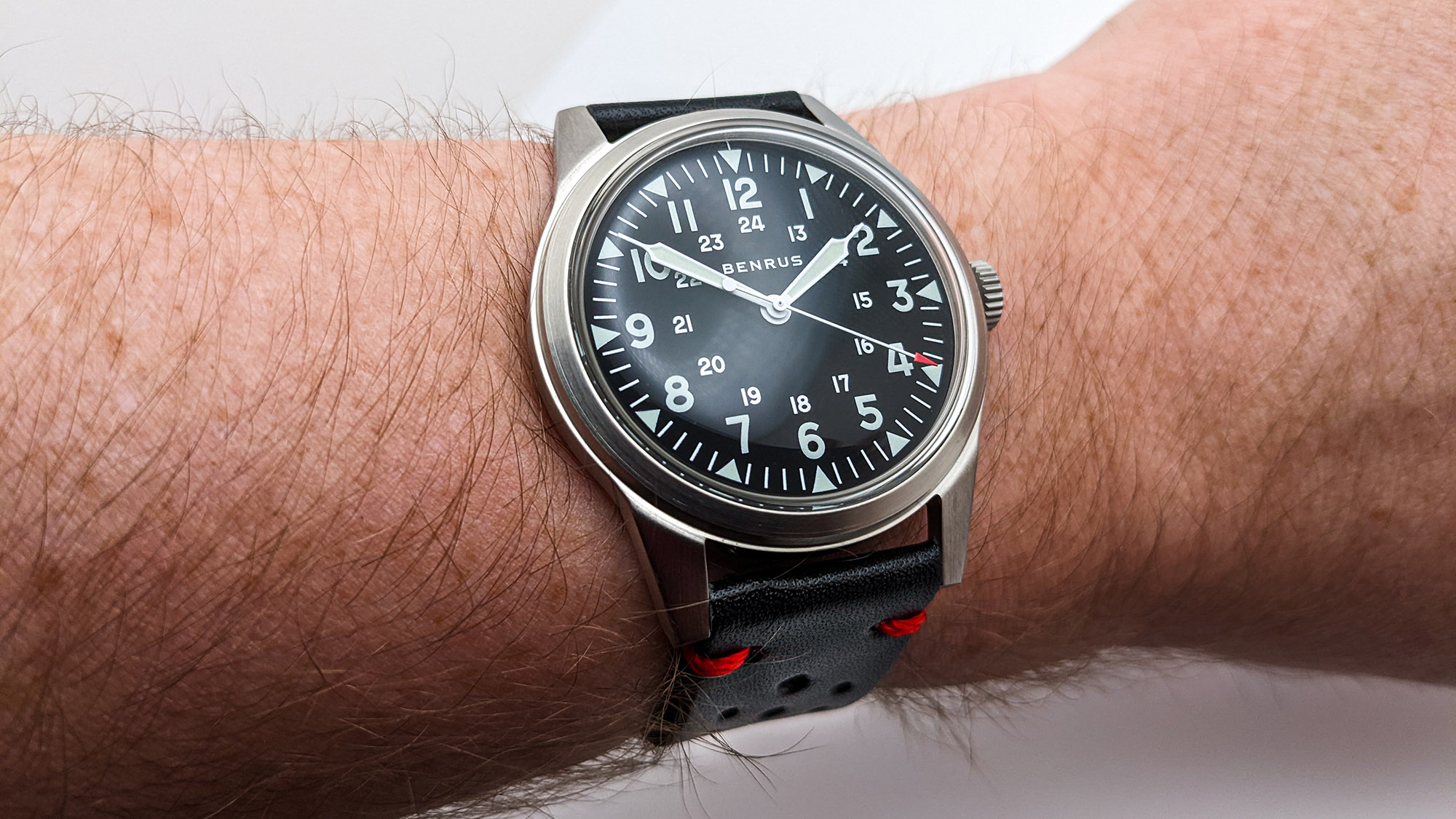 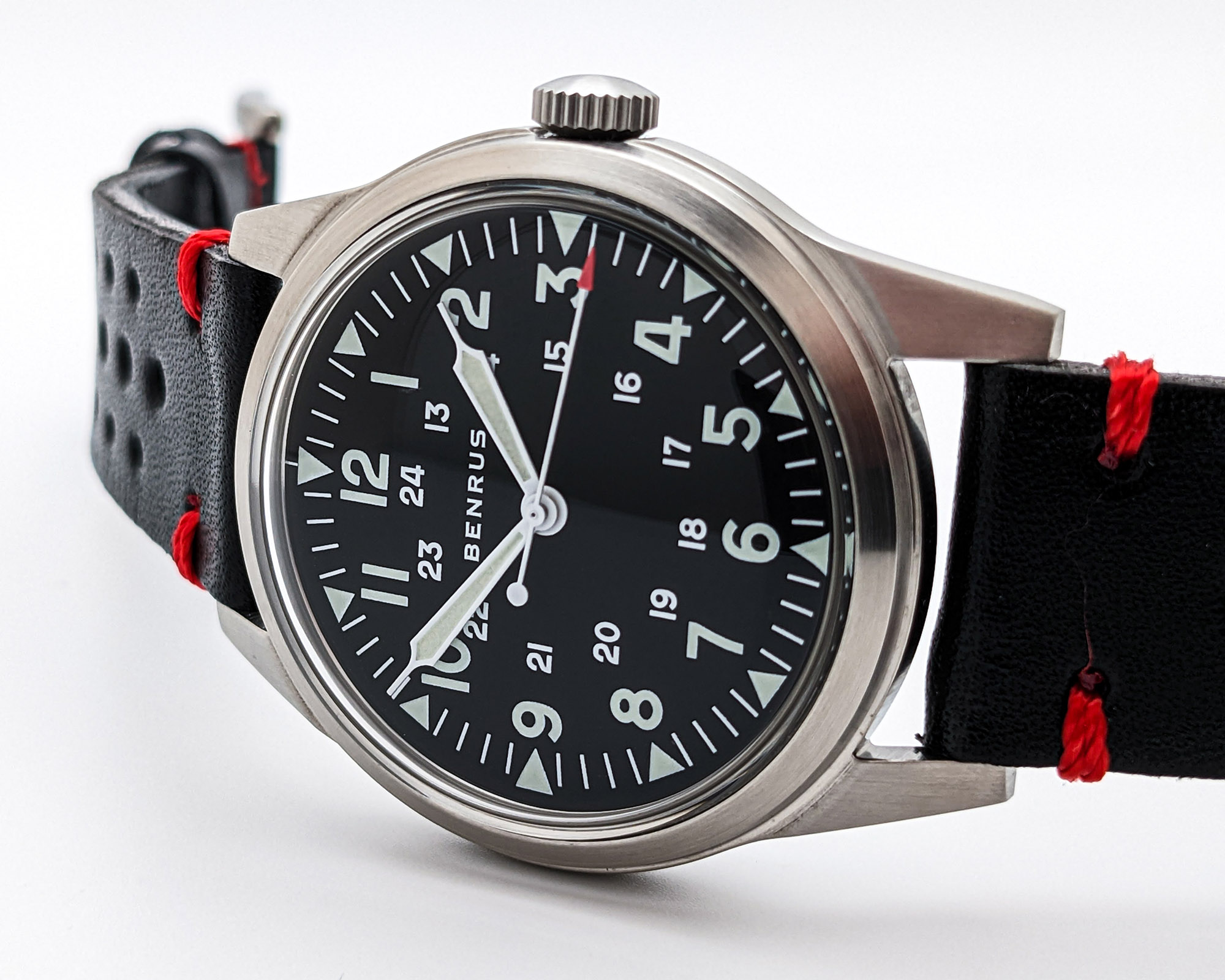 When it comes to cars on film, few if any automobiles have had both the on-screen impact and the cultural staying power of the Highland Green 1968 Ford Mustang GT driven by Steve McQueen in the classic crime thriller “Bullitt.” The Mustang, along with the black 1968 Dodge Charger R/T driven by the film’s villains, stands out in one of the most influential cinematic car chases of all time, and carries nearly as much star power throughout the film as McQueen himself. By contrast, Steve McQueen’s watch in “Bullitt” has historically been far lower-profile. Remaining unidentified for decades after the movie’s release, the unassuming field watch with the distinctive red-tipped seconds hand was eventually recognized by online forum members as the original Benrus Series #3061 — a civilian counterpart to the military-grade timepieces Benrus was concurrently supplying to the US military during the Vietnam War. Since this discovery, this vintage Benrus has taken on dark horse status among film watch collectors, and for its latest release, Benrus looks to capture some of the ‘60s mystique of “Bullitt” with its own modern interpretation of the classic design. The new Benrus Series #3061 presents an upsized but otherwise faithful take on the ‘60s field watch style, proudly assembled in the United States and successfully channeling some of the timeless cool of Steve McQueen. 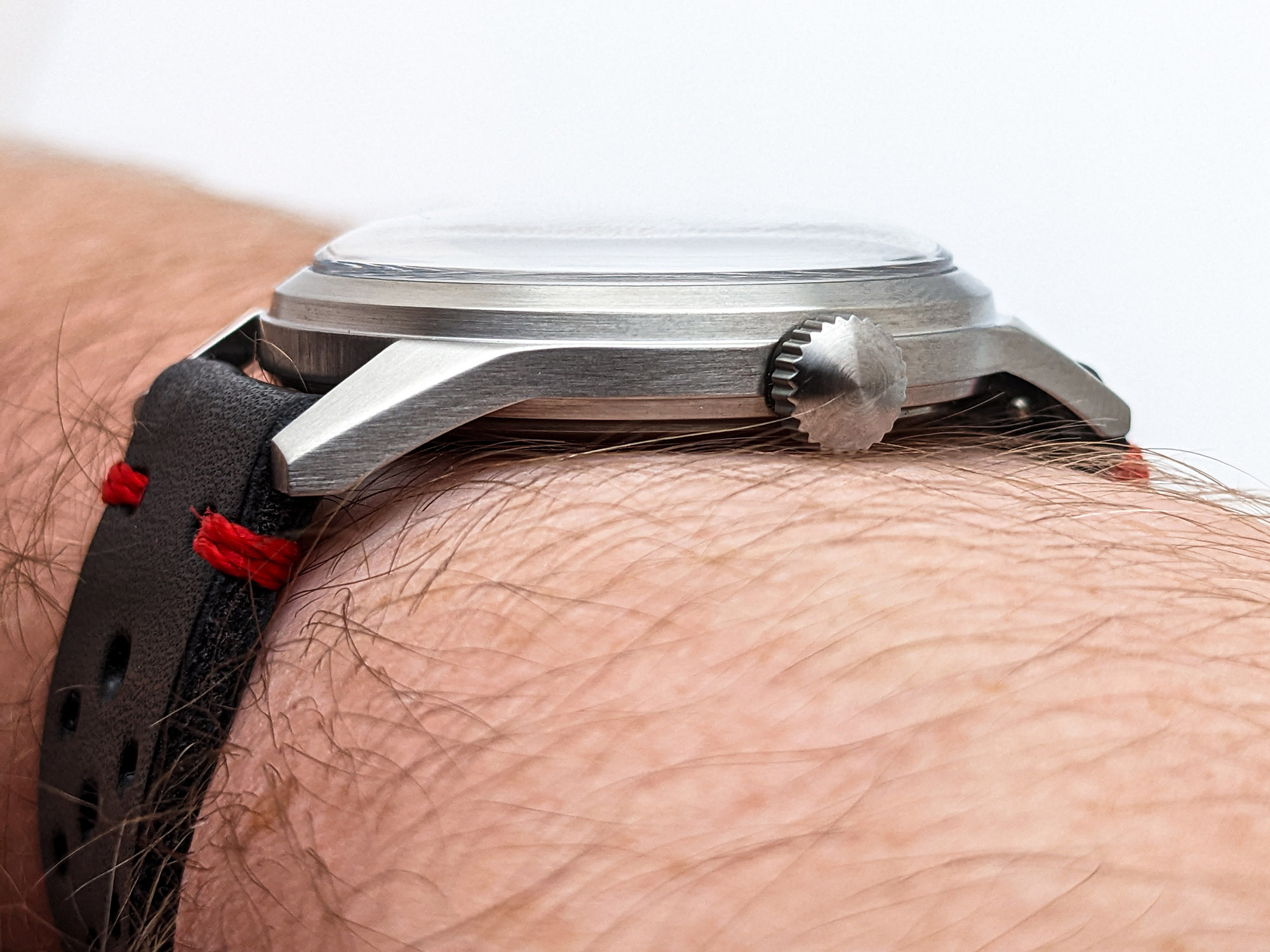 Measuring in at 39.5mm-wide, the fully brushed 316L stainless steel case of the Benrus Series #3061 plays well with modern sizing conventions, but even amidst this climate of decreasing case size, this design offers a distinctly different wearing experience than its ‘60s-era 34mm-wide field watch ancestor. That said, the Series #3061 cuts a slender and handsome figure on the wrist. The modest 12mm overall thickness is broken up between a deep caseback, a narrow central case band, a tall chamfered bezel, and an old-school double-domed acrylic crystal. While the overall form is elementally simple, Benrus adds some dimension to the design on the wrist with the use of directional brushing. The radially brushed bezel, horizontally brushed case sides, and vertically brushed lugs all catch the light in subtly different ways to give the case some much-needed visual complexity. Benrus keeps the Series #3061’s solid caseback elementally simple, with minimal engraving and a vintage-style press-fit design. This vintage-style construction is reflected in the Series #3061’s water resistance, which is rated at a decent if unspectacular 50 meters. 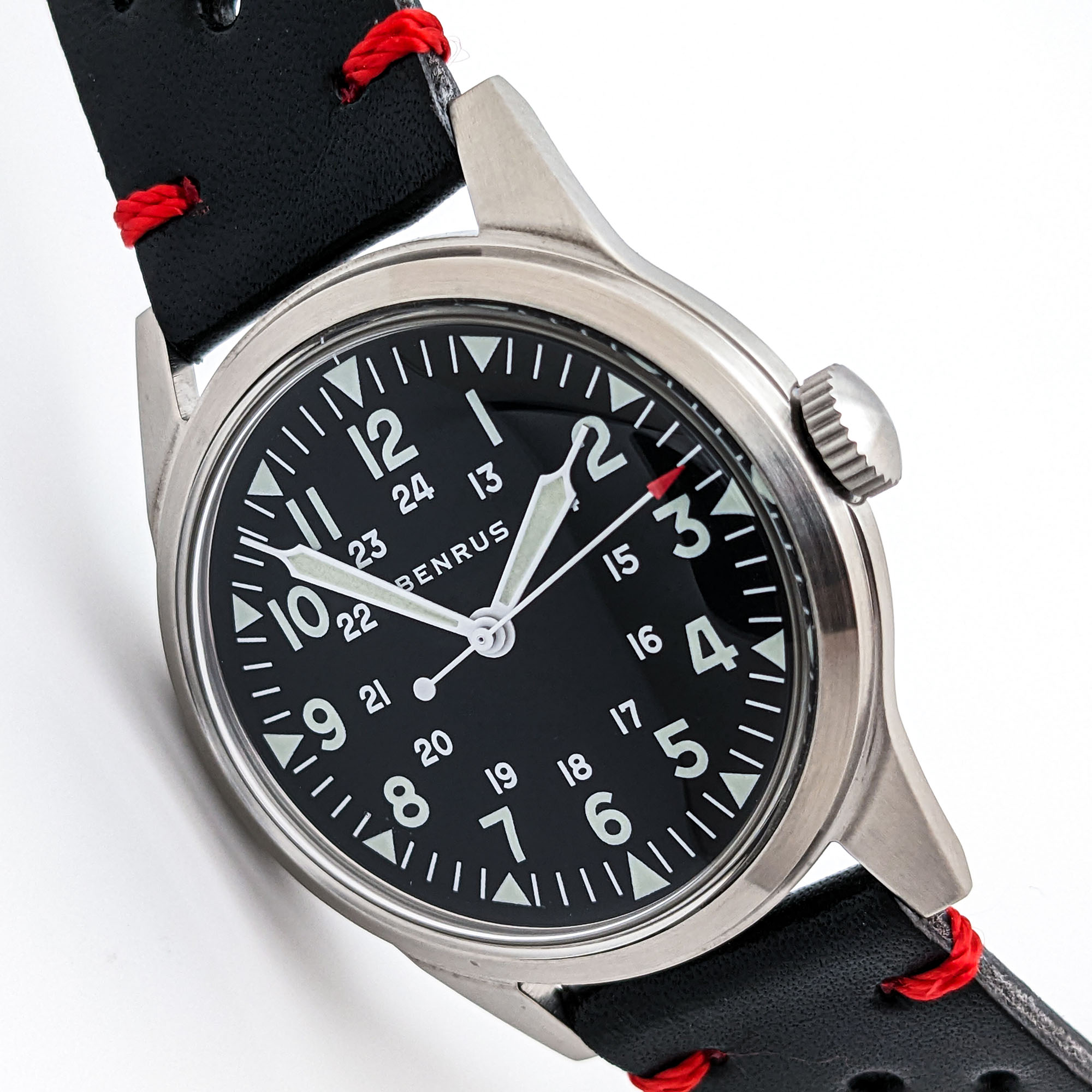 Benrus keeps the dial of the Series #3061 as faithful as possible to the look of the ‘60s original. Everything from the white-edged syringe handset to the printed wedge indices surrounding the bold, rounded Arabic hour numerals could have been lifted directly from the brand’s Vietnam-era field watches, and the classic military layout remains as clean and legible today as it was then. An inner 24-hour scale visually deepens this military connection, but the Series #3061’s civilian touches are what give it character on the wrist. The splash of bright red on the arrow-tipped seconds hand gives the design just a hint of vibrancy on the wrist, while the decision to add a single printed Benrus emblem at 12 o’clock pulls it away from the relentless utilitarianism of the sterile-dial military-issue versions. 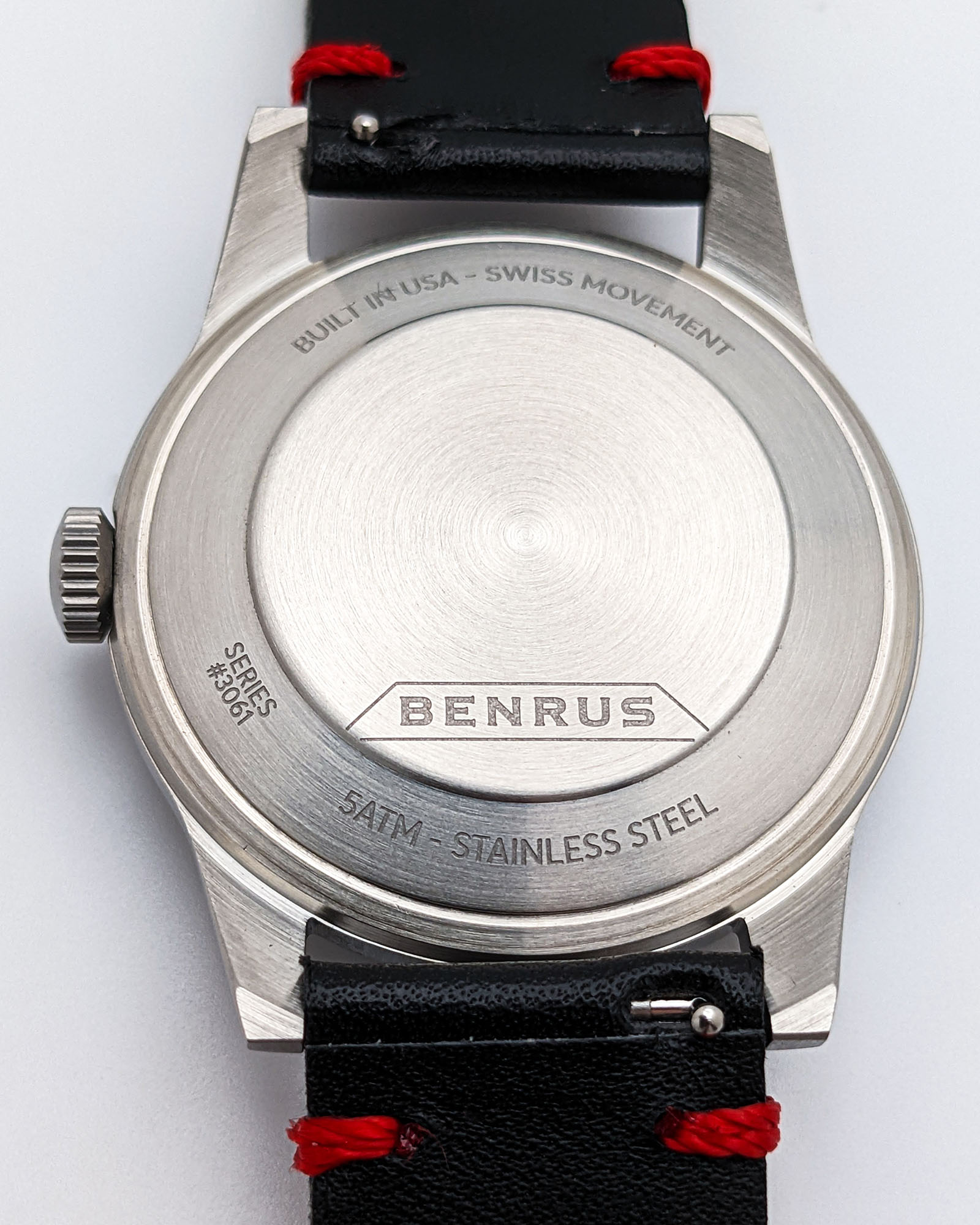 Benrus opts to power the Series #3061 with the Soprod P024 automatic movement. Although it remains a relative rarity compared to rival Swiss entry-level movements from ETA and Sellita, the P024 is becoming an increasingly attractive option for brands looking to source an affordable Swiss mechanical movement. The Soprod P024 is a relatively no-frills powerplant, featuring a 38-hour power reserve at a 28,800 bph beat rate. Our accuracy testing for the P024 was likewise unspectacular, averaging a full +15 seconds per day during our testing period. 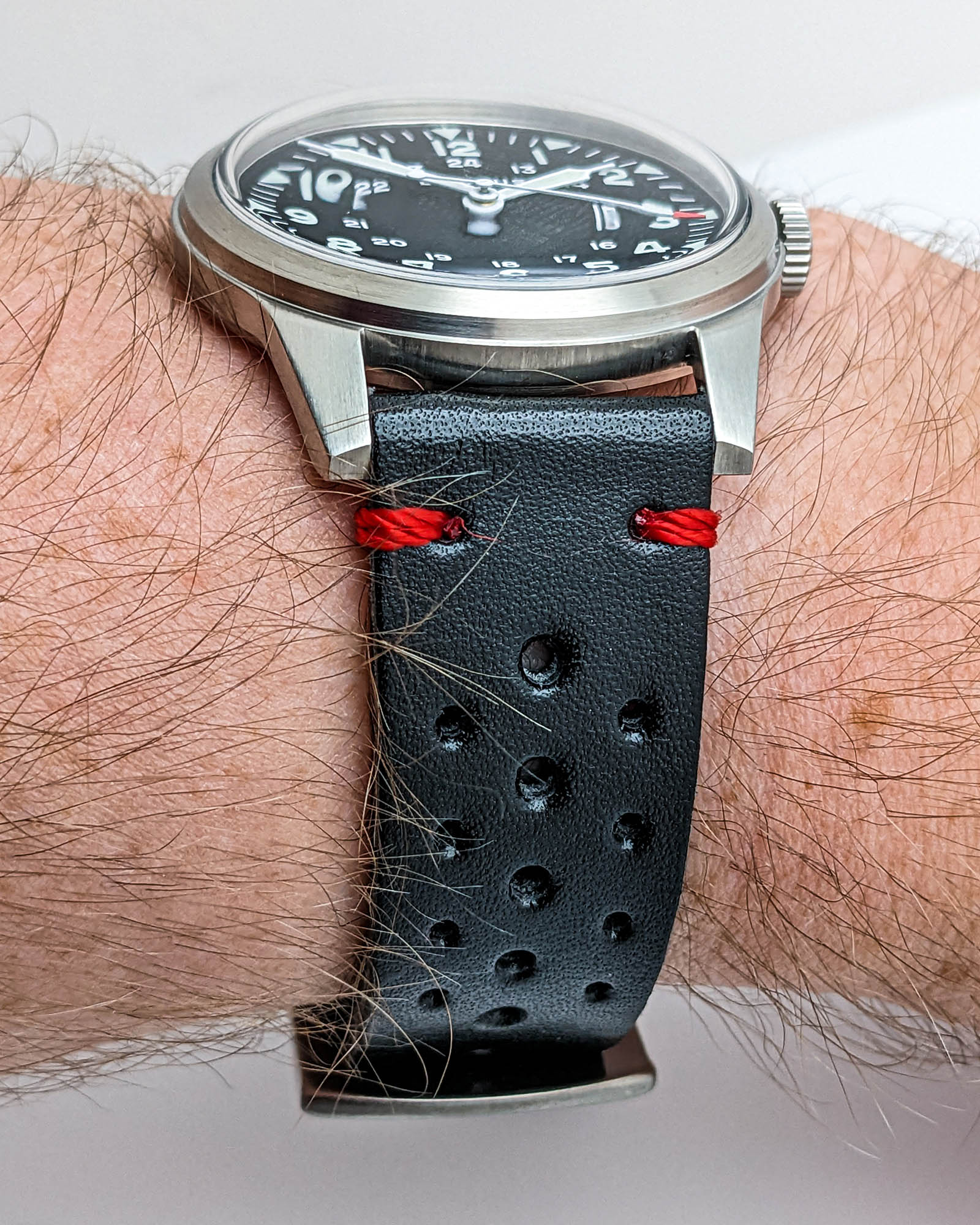 To complete the rugged, McQueen-inspired look, Benrus pairs the Series #3061 with a perforated rally-style strap in glossy black leather. There’s a charmingly handmade feel to this strap design on the wrist, with unpainted sides and accent stitching in bold fire-engine red. Despite the comfortable custom feel, however, this strap can come off as a bit of an anachronism when paired with the faithful ‘60s look of the case and dial. In addition, some enthusiasts may prefer a more traditional field watch-style strap in brown or khaki green. 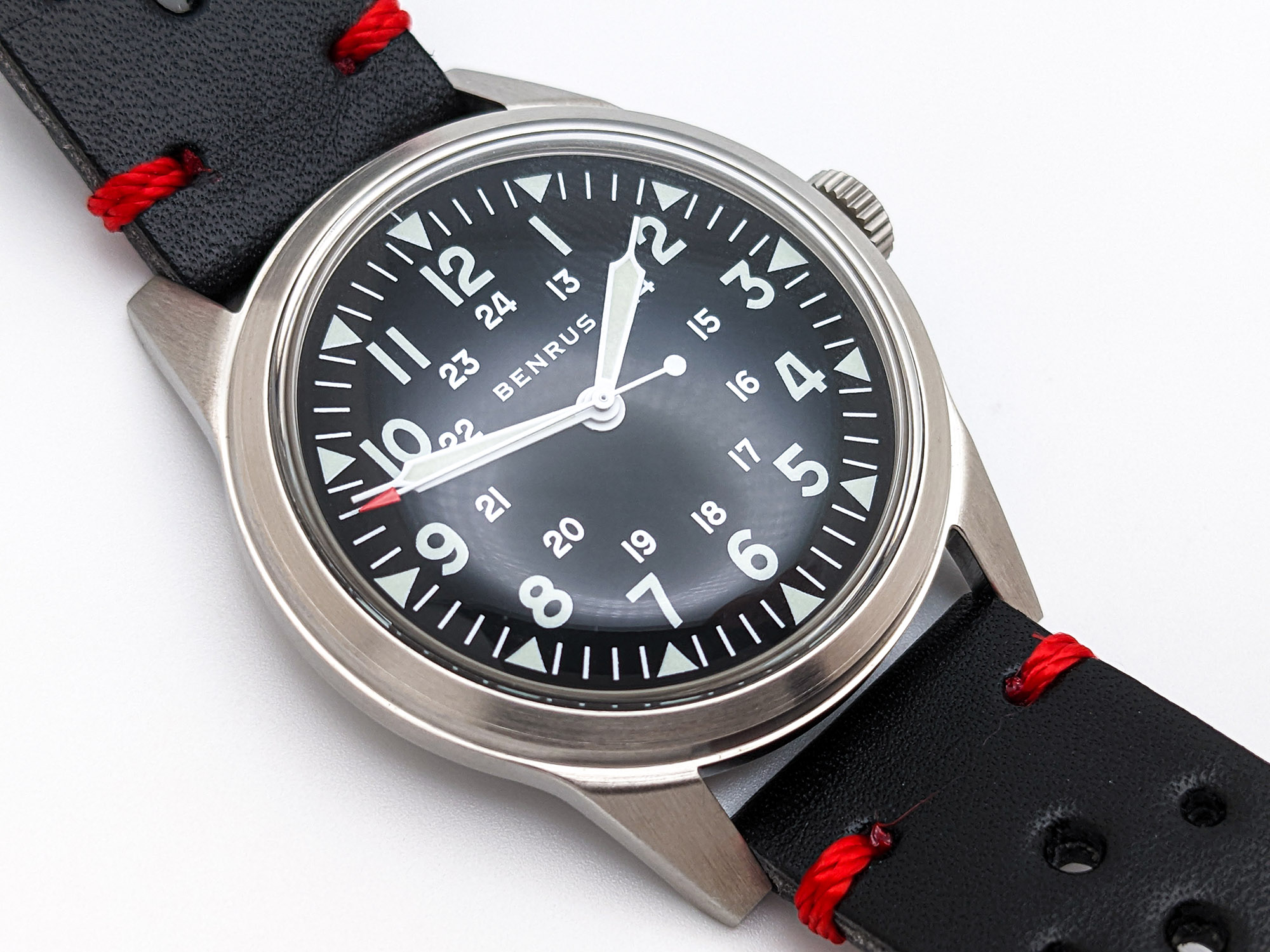