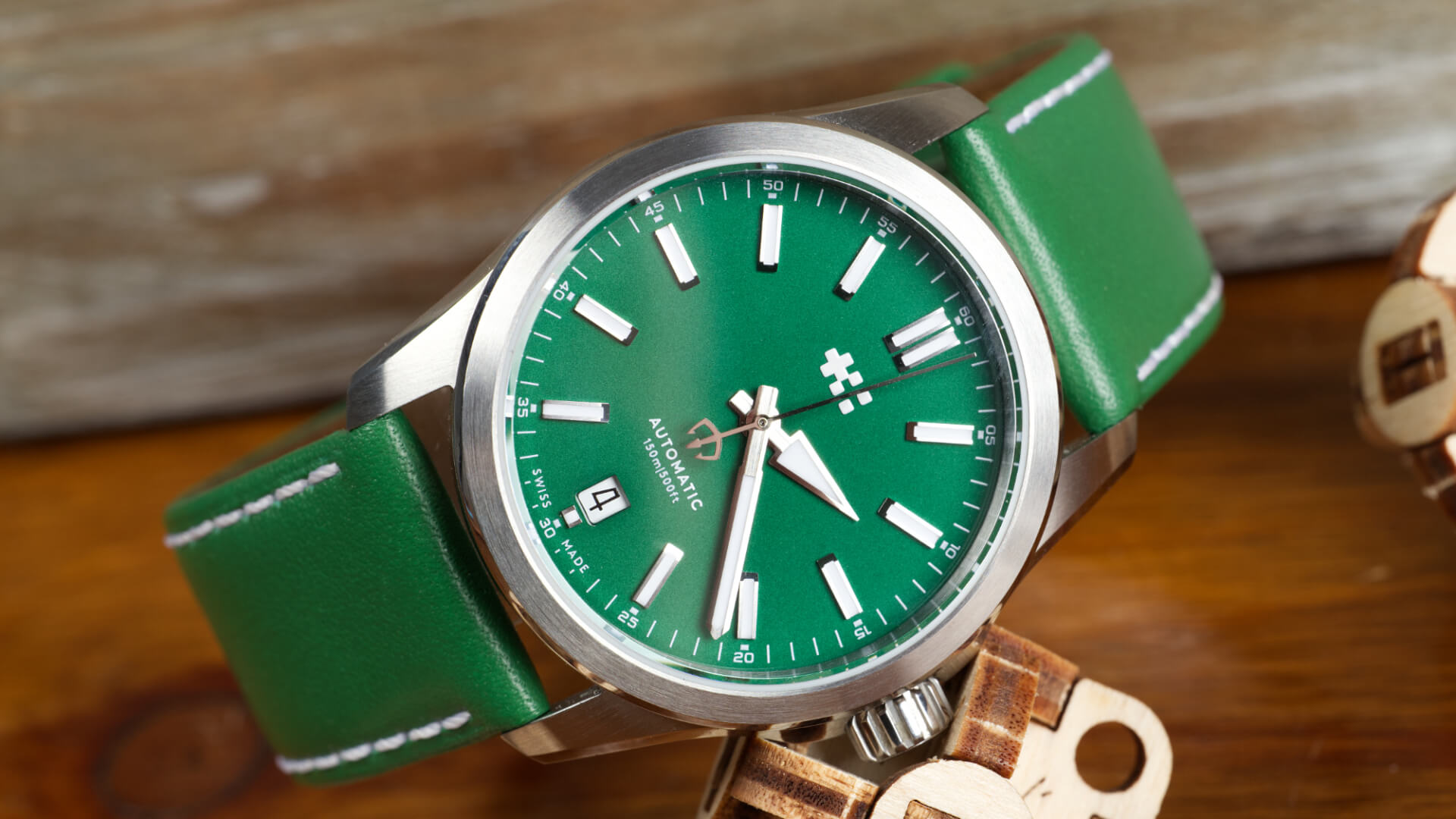 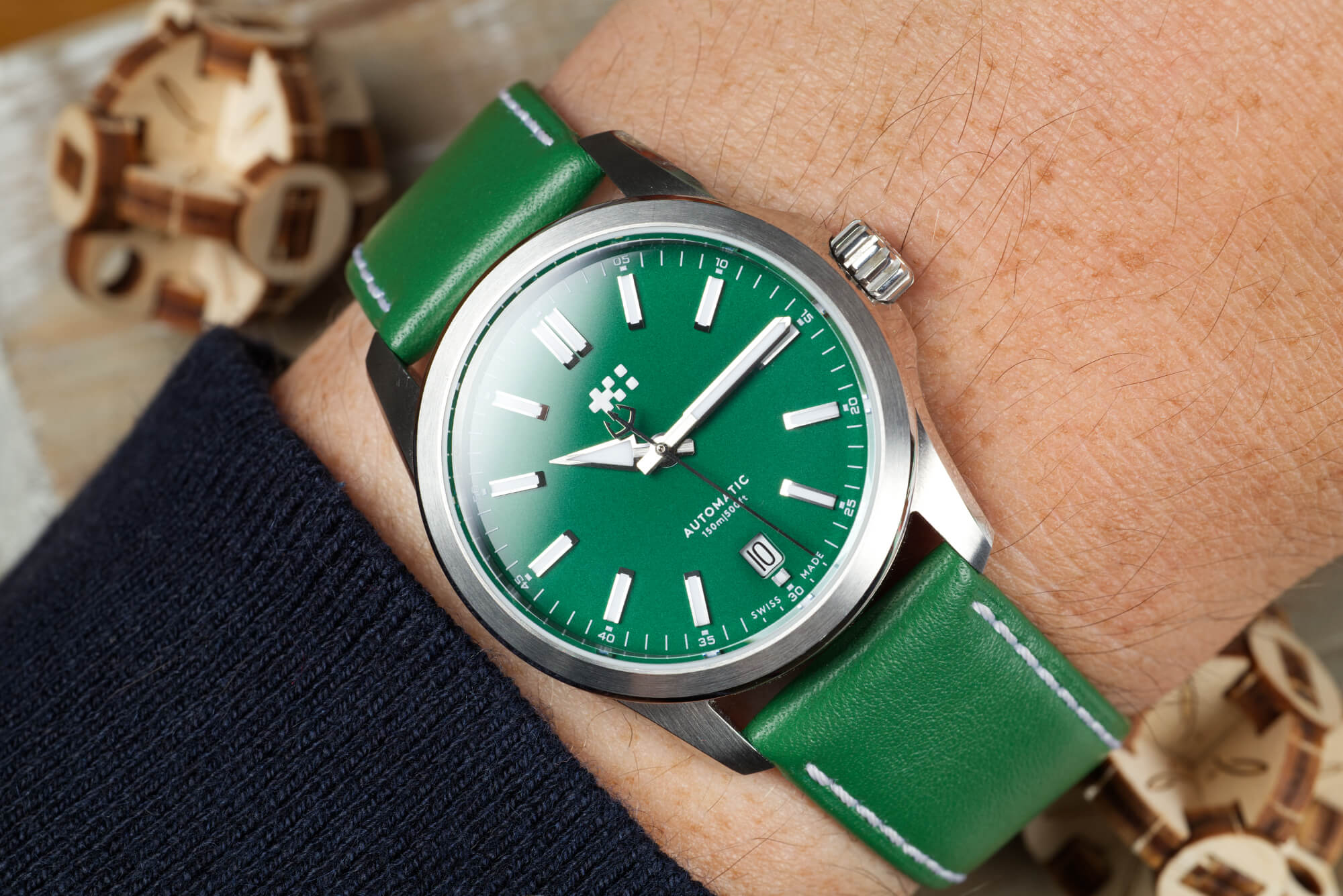 The pendulum is swinging back the other way. Smaller watches are becoming more and more prevalent, and 36mm seems to be the go-to size for new pared-down releases. (For my part, when I’ve lamented the out-of-control proportions of watches, I was hoping for more 38-42mm watches, but here we are.) I’ve got plenty of friends—and you may, too—who’ve been pining for years for brands to make watches in sizes that look better fit their wrists. And just recently, Ariel argued for brands to make watches in more sizes—not just new models, but offering the same model in several diameters. I suppose my friends and Ariel were all on to something because Christopher Ward has released a new 36mm version of its hit 2021 model, the C63 Sealander. While the original was simultaneously released as a three-hander and a GMT, the new 36mm versions will only be available as three-handers and will come in six colors, four of which are limited. 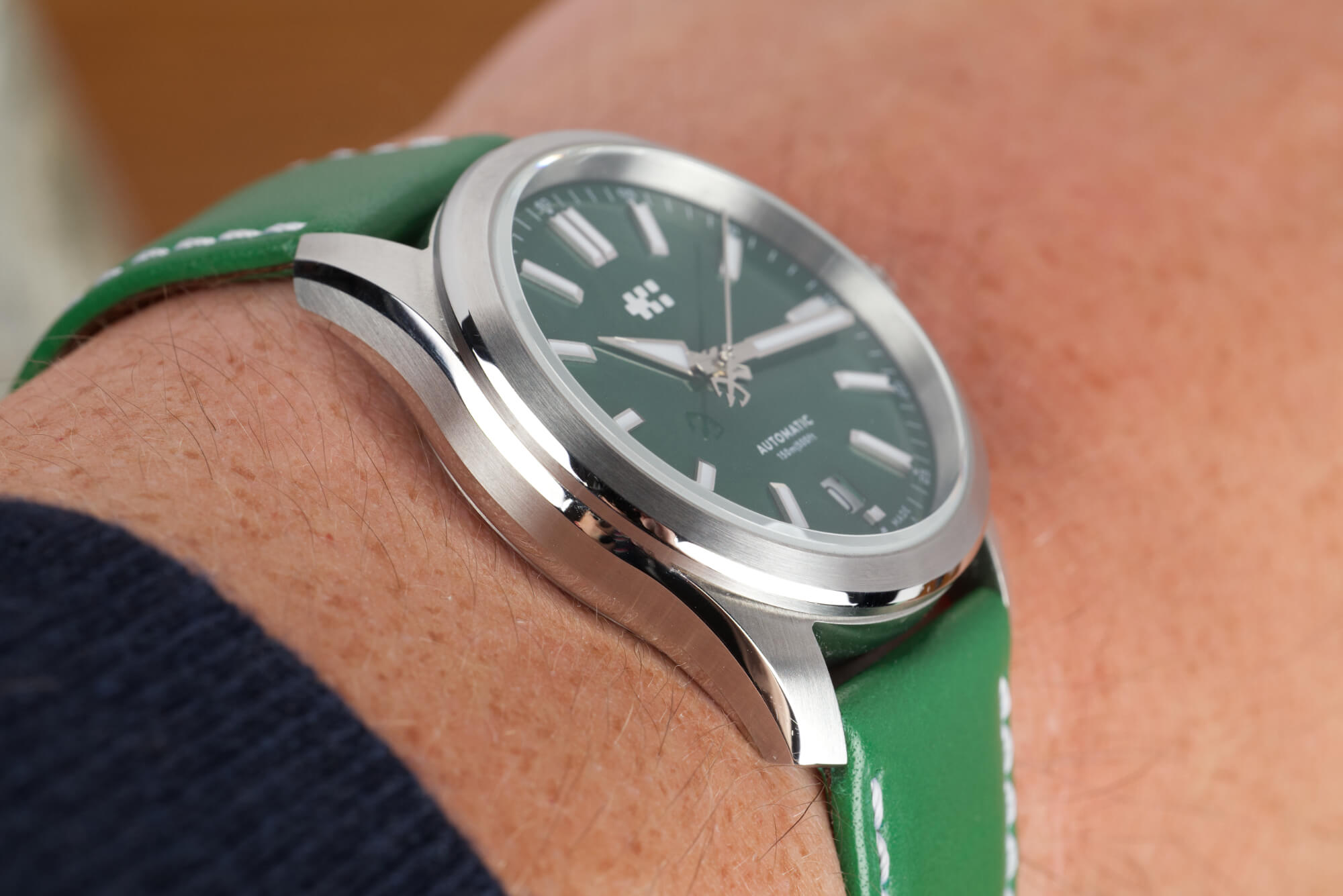 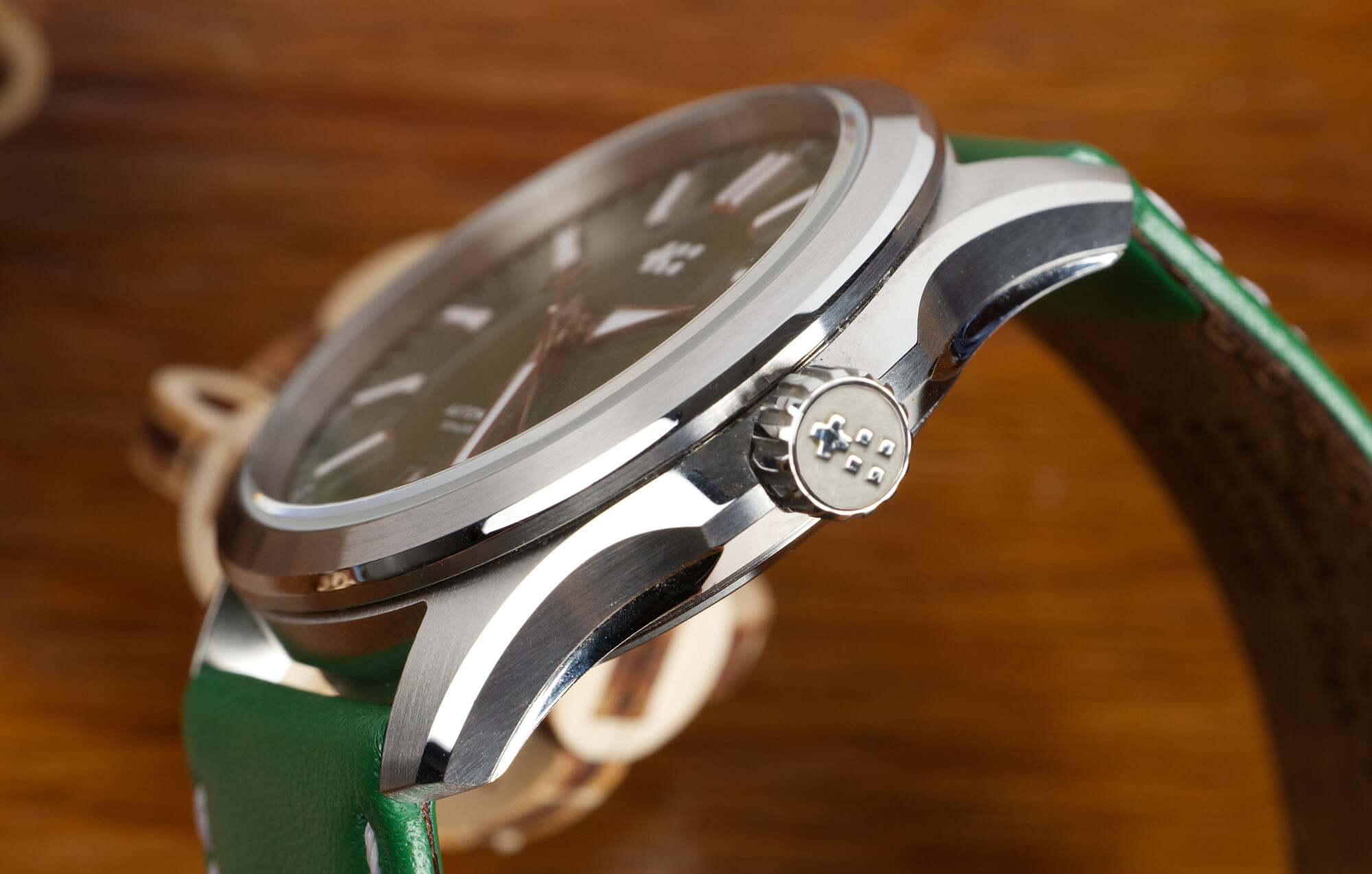 I’m not going to pull punches. After reviewing an inordinate number of watches, I still think the Christopher Ward Light-catcher case is one of the best cases out there. It does exactly what its name promises: catches the light. A quick count shows seven surfaces with alternating brushed and polished finishes, bending and swooping to create an engaging profile. The big difference for this new C63 Sealander case is its smaller 36mm diameter, which comes with a reduced 42.87mm lug-to-lug and a slimmer 10.75mm thickness compared to its 39mm counterpart. Beyond that, you’re dealing with the same Light-catcher case as CW has pushed to almost all its models. The crystal is sapphire, the crown screws down for 150m of water resistance, and the lugs are an easygoing 20mm. For me, two elements stand out — I’ve always loved the way the lugs terminate in a crisp edge, with that final facet capping them off, and I think the crown guards are perfect in the way they organically emerge from the midcase and thin out as they come into themselves. On the wrist, the 36mm Sealander wears just as well as its 39mm sibling, but I found the reduced case to be a bit small for me. I know a lot of people are going to be happy to have this as an option, but on my 7-inch wrist, I’d go with the 39mm Sealander. 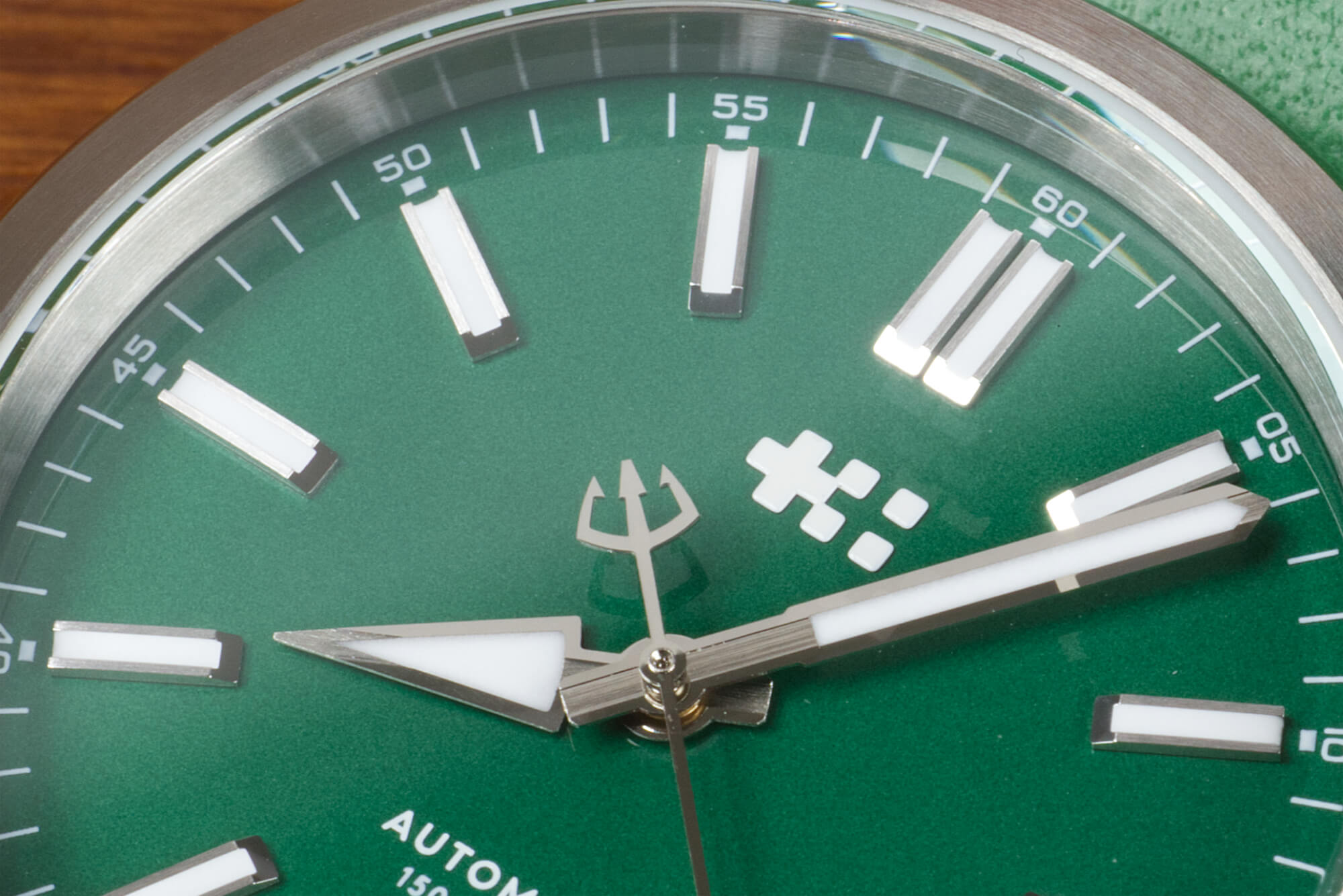 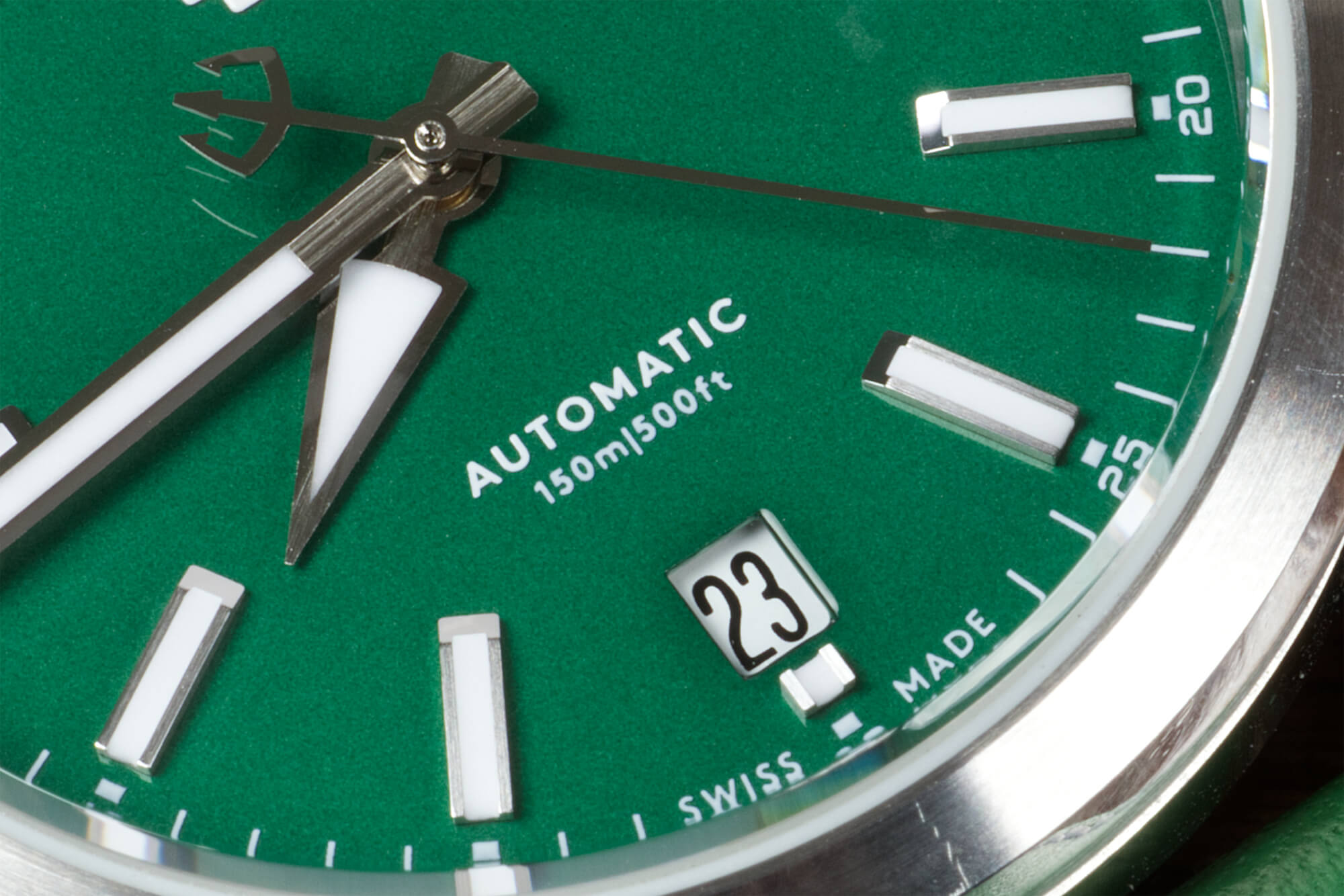 For its big (little) release, Chris Ward finally kowtowed to the colorful dial trend. Yes, the brand has done colorful dials here and there, but not as simultaneous releases of a single model; the brand tends to play it safe with most of its watches offered in black, white, or blue, with a few green options here and there. For the new 36mm Sealander, though, in addition to regular black and white production dials, the watch is offered in Lucerne blue, Acer red, New Forest yellow, and the Jura green reviewed herein. The colors are named for English flora and Swiss topography, a fitting inspiration given the English design and Swiss build of the watches. All the dials are polished lacquer, giving them an even but subtle sheen that, like the case, plays with light a bit. Furthering the light play are the handset (in CW’s now-recognizable combination of arrow and pencil hands) and applied markers have brushed tops and polished bevels, and are applied with a generous dose of top-grade Super-LumiNova C1. The seconds hand features a trident counterweight, which, considering that this is not a trident model, is more of a brand indicator than a model indicator. The date window is no-fuss, with a simple cutout with rounded corners giving way to a white date wheel (on the black dial, the wheel is color-matched). At 12 o’clock is the latest Christopher Ward logo. By my count, this marks the fourth logo for the brand since its 2004 founding. While these logo changes have caused a bit of grumbling amongst those with too much time, I think they show the brand’s evolution from a dress watch focus to a sports watch focus. That said, I think they should stick with the current design, which is a stylized representation of the Swiss and English flags. 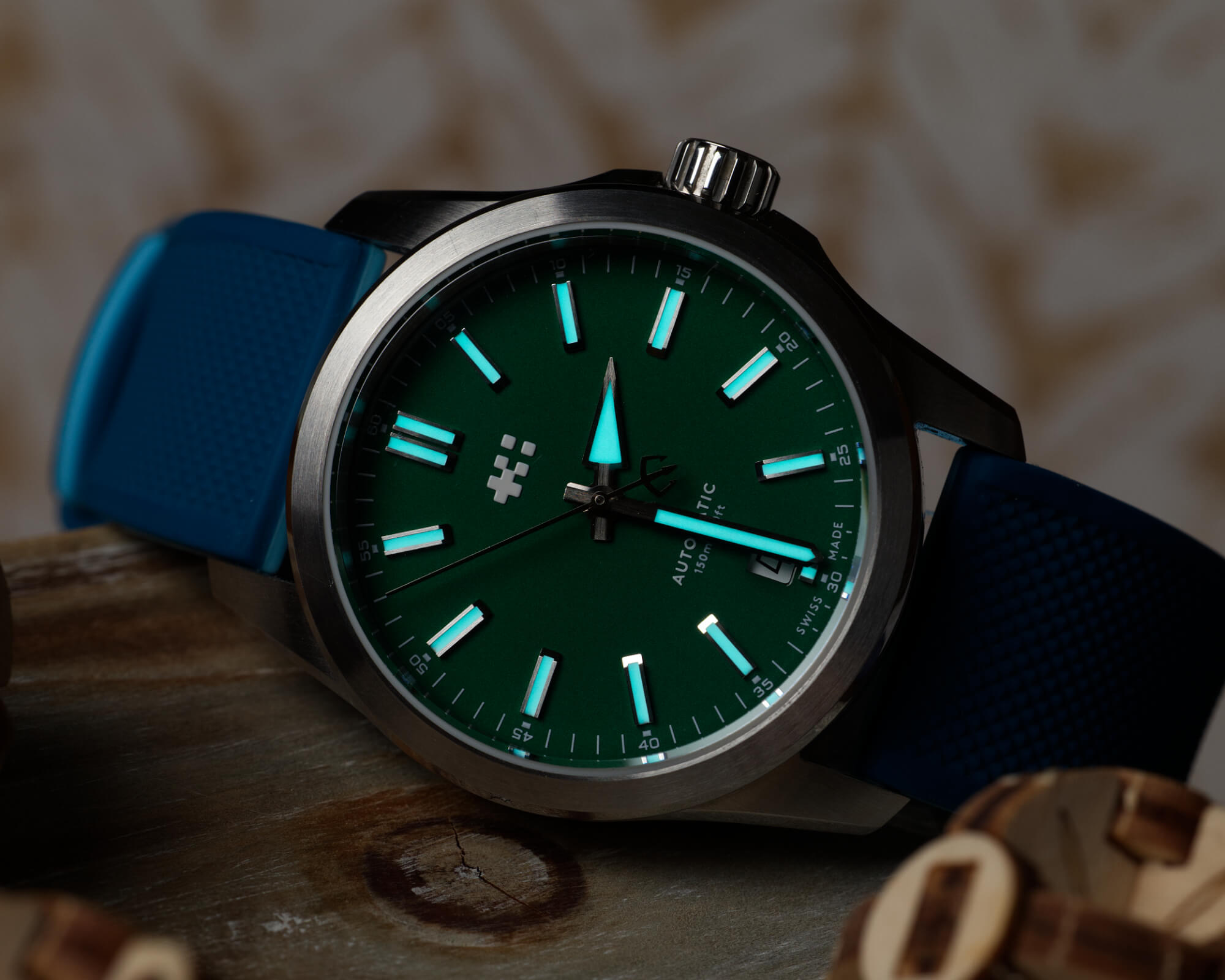 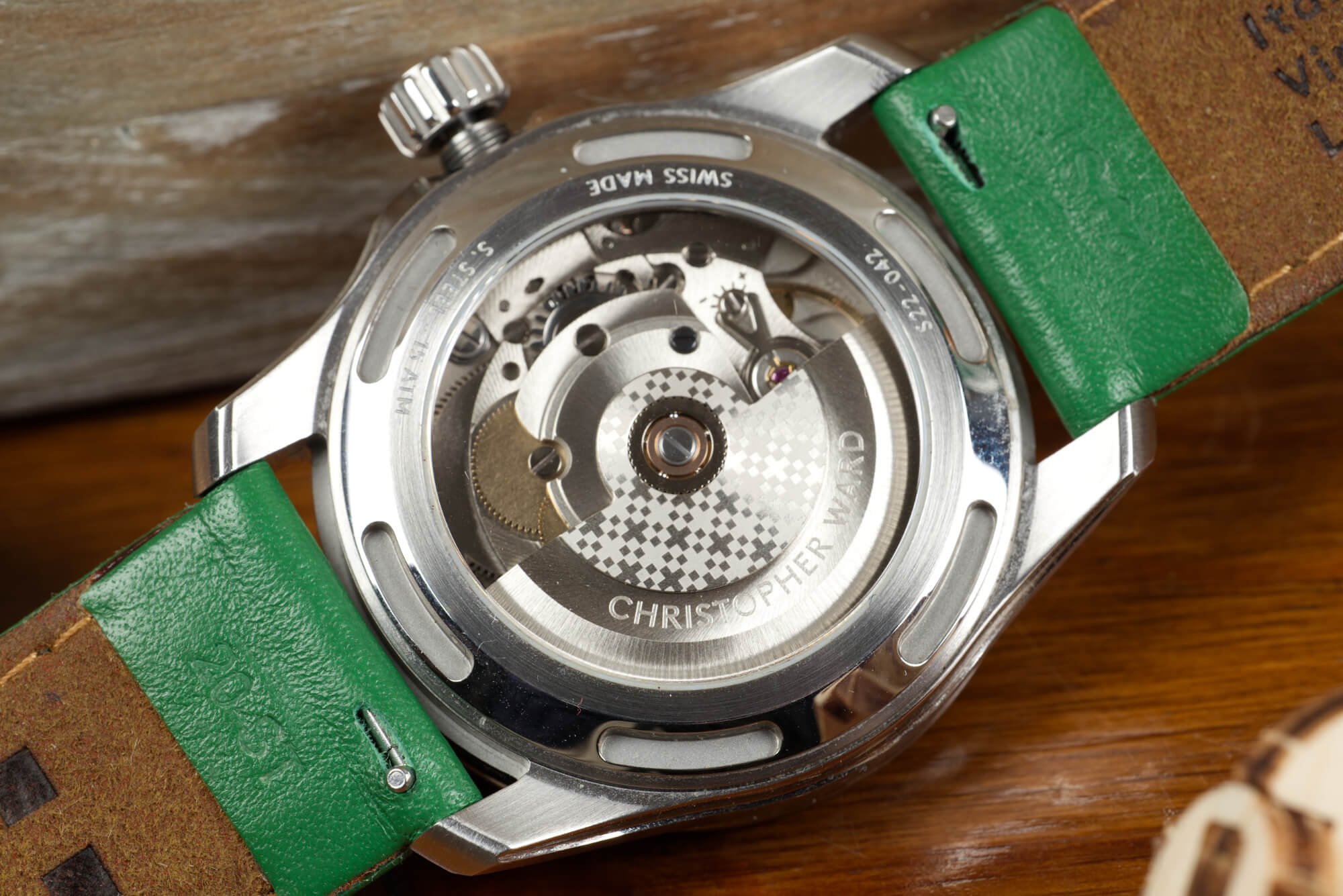 Powering the C63 is the venerable Sellita SW200-1, with a custom rotor seen through a screw-down sapphire caseback. Aside from the decorated rotor, there’s not much extra here other than the reliable movement you know and love. It features a 38-hour power reserve running at 28,800 vph, with 26 jewels and an accuracy of -/+ 20 seconds per day. This is the same caliber that’s used in the larger C63, which results in the 36mm dial having a slightly smaller 6 o’clock marker. While it’s not something that matters, I happen to like how the curved channels (for screwing the case in) look. 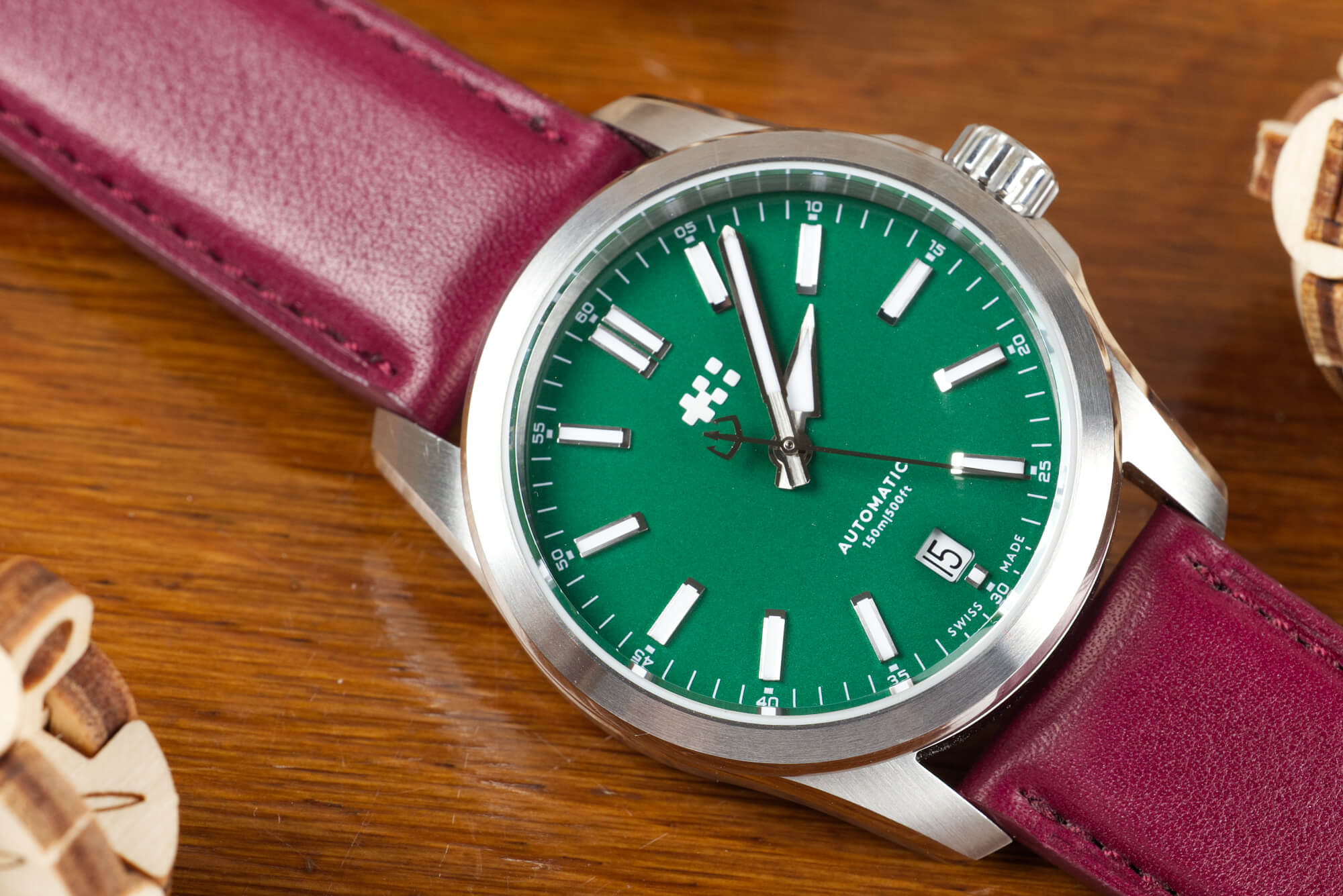 One of the reasons the watch looks a bit small on the wrist (or at least my wrist) is that CW shrank the case by 3mm but kept the lugs at 20mm. From a strap addict perspective, I’m appreciative: 20mm is arguably the most common strap size (with 22mm a close second), and to be sure, makes up the bulk of my straps. I’d never actually argue that a watch brand make a watch with 18mm or 19mm lugs, but the size of lugs make the 36mm case seem smaller than it actually is. The quick-release straps help mitigate this a bit, as it creates a hard break in the flow of the case, which lets it stand out a bit more. For this model (and the recently updated Trident diver), Christopher Ward has also upgraded its bracelet. Aesthetically paramount is the increased taper (previously unnoticeable), but the bracelet also adds screw links, an upgraded quick-release system, and a ratcheting micro-adjust mechanism. Just an FYI: in my experience, most ratcheting clasps let you close down the bracelet while it’s on the wrist, but require some action to expand the bracelet; the CW does not allow this, requiring a button to be depressed to expand and contract the clasp. In any case, having handled the new bracelet on the updated Trident, I can attest that it’s a significant improvement over the old model. 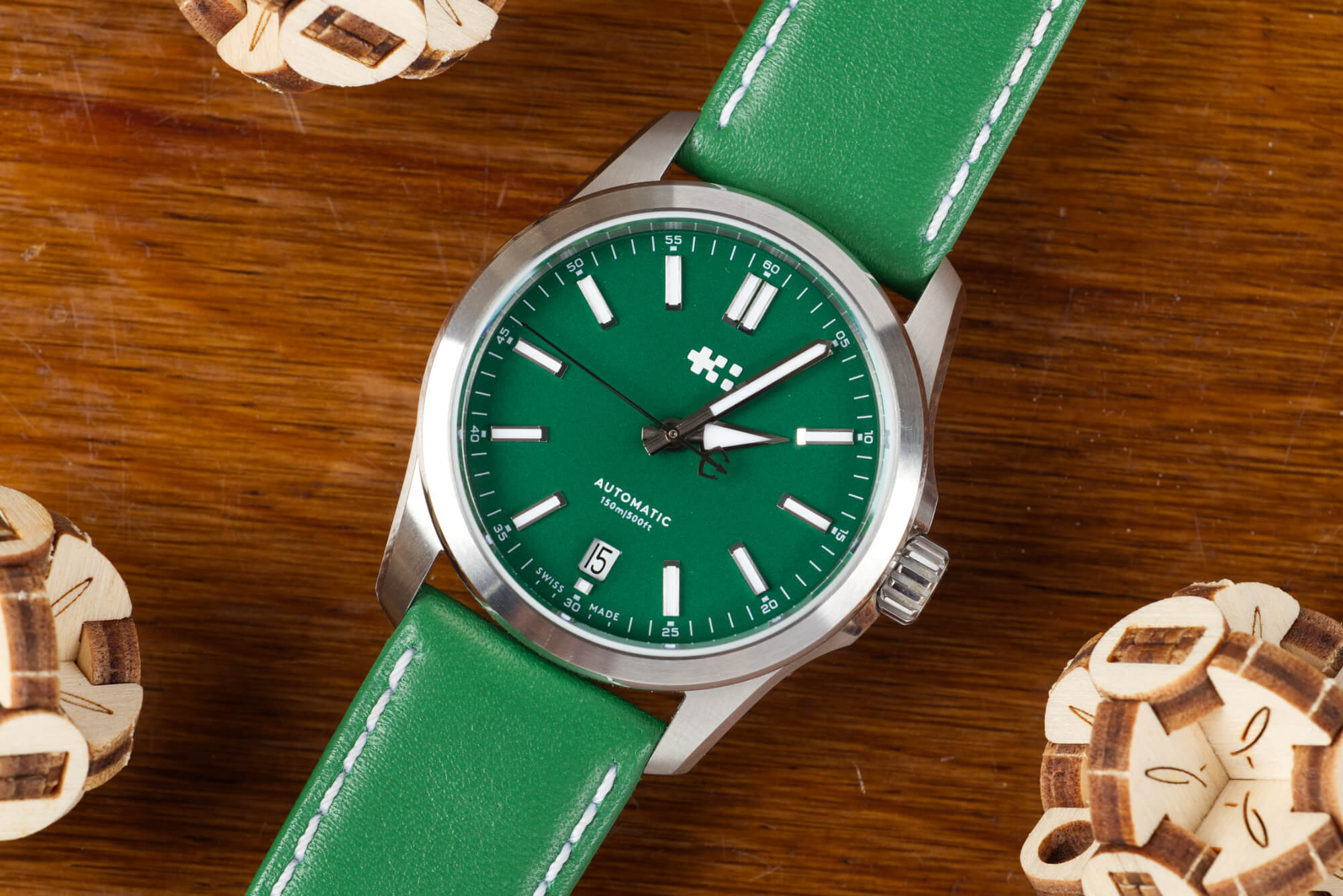 This release is going to make a lot of people quite happy. With more and more watch brands releasing sub-40mm models, there’s a growing list of watches for those with smaller wrists. The Christopher Ward C63 Sealander is the English brand’s go-anywhere, do-anything option and presents a clean, well spec’d watch, with the 36mm available in a rainbow of colors for those looking for something a bit more exciting than the standard black and white dials. The new 36mm Christopher Ward C63 Sealander is priced at $765 on leather, and is available for $925 on the bracelet, with the limited edition models coming with their color-matched strap. For more information, please visit the brand’s website.

Necessary Data
>Brand: Christopher Ward
>Model: C63 Sealander Jura Green LE
>Price: $925, limited to 200 pieces for color dials, black and white dials unlimited
>Size: 36mm-wide, 10.75mm-thick, 42.87mm lug-to-lug
>When reviewer would personally wear it: Anywhere, for any occasion, especially on the bracelet
>Friend we’d recommend it to first: Someone with a smaller wrist looking for a go-anywhere, do-anything watch with color
>Best characteristic of watch: For many, it will be the smaller size combined with a no-nonsense spec sheet; for me, it was the dial color, matching strap, and the new bracelet (which I experienced on another model)
>Worst characteristic of watch: The size will likely be a dealbreaker for some, and it’s a shame these bright colors aren’t offered on the larger models; the inability to contract the micro-adjust clasp on wrist is disappointing