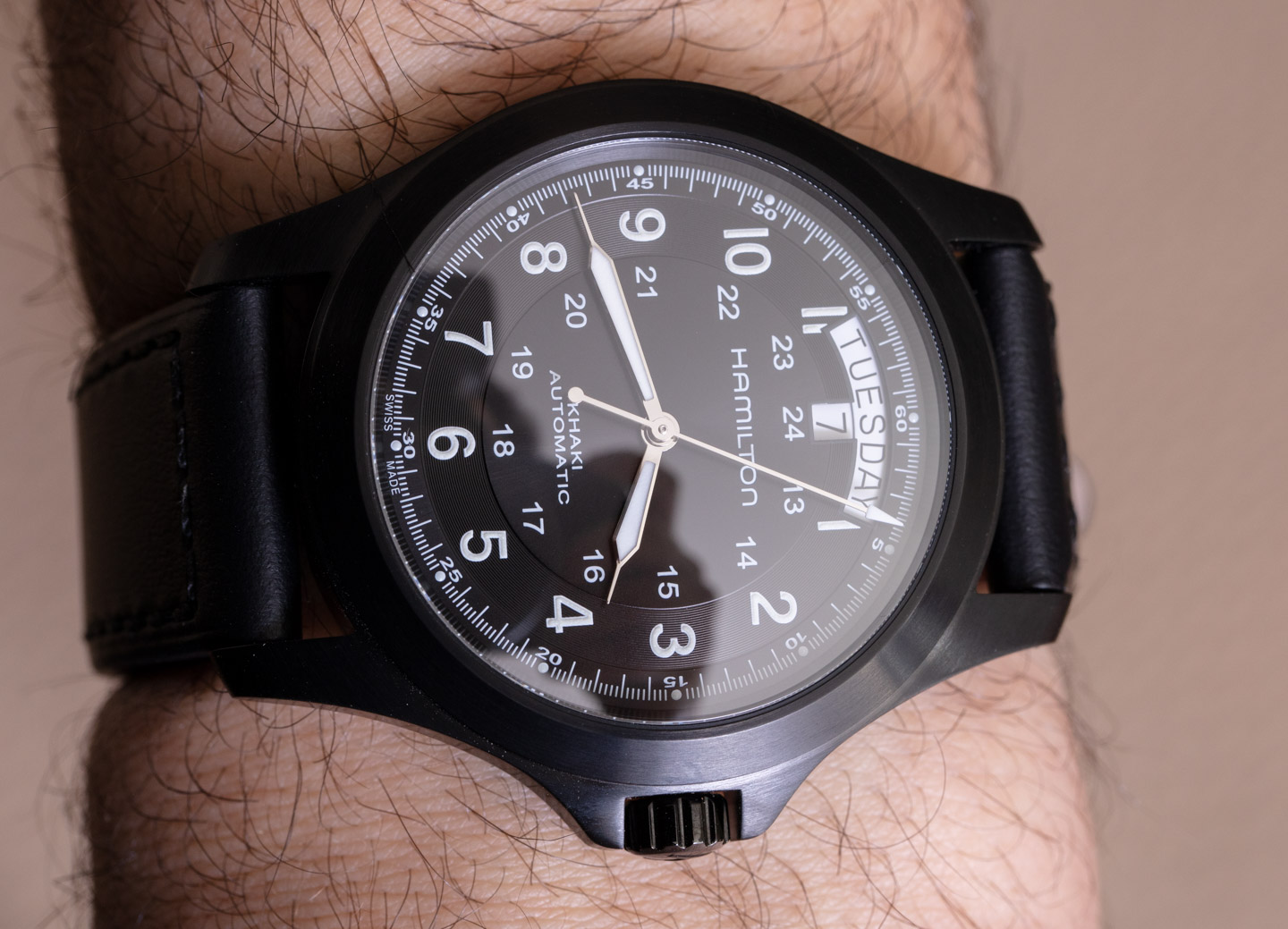 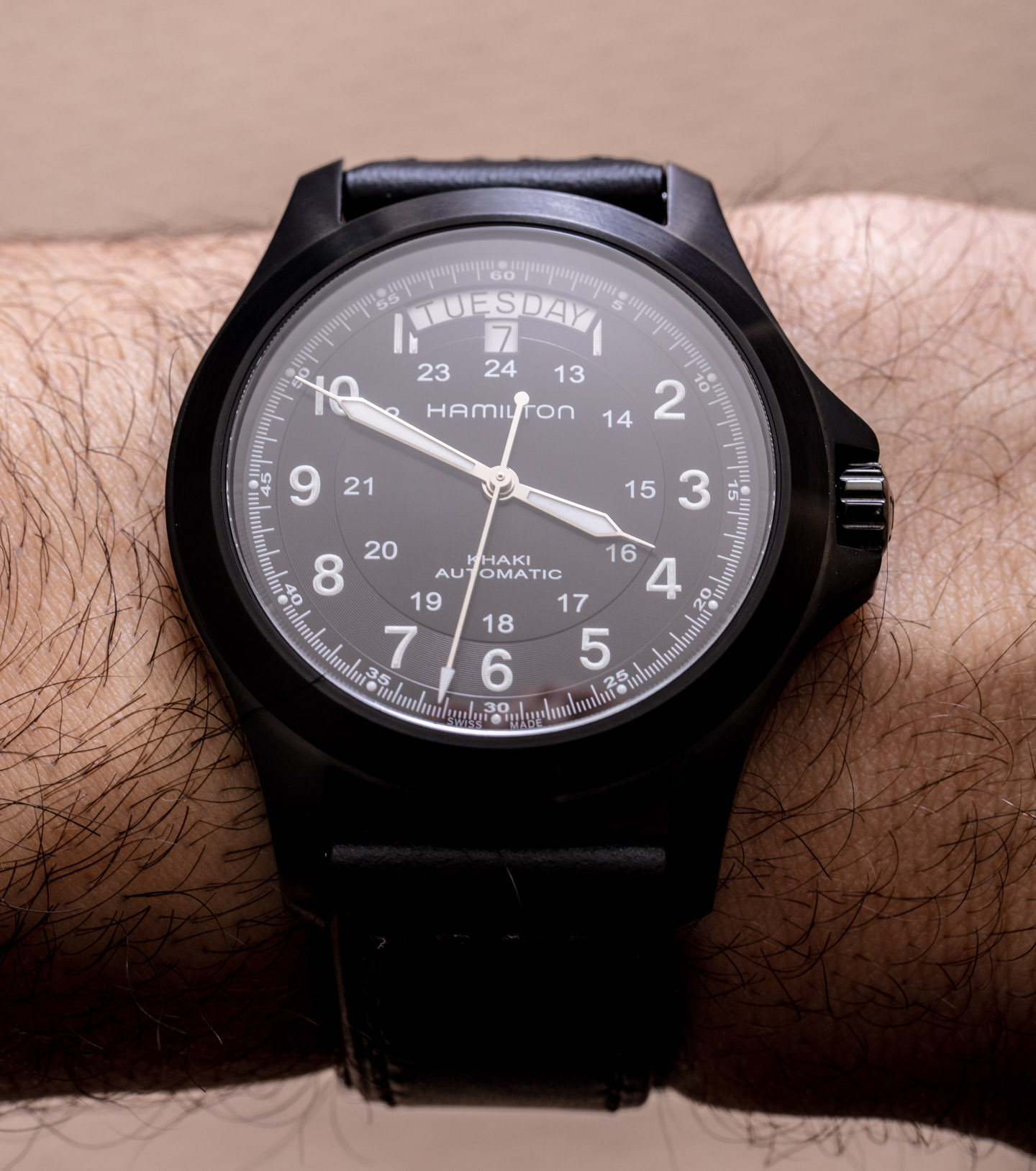 I’m willing to guess that the prolific Hamilton “Khaki” watch collection might have more SKUs attributed to it than maybe any other watch brand’s collection out there. The Hamilton Khaki is the Swatch Group-owned, historically American brand’s continuing celebration of the legacy of military watches Hamilton produced. Many of those were “field watches” that were worn on the wrists of a variety of soldiers. What people so admire about military watches is that they are very much purpose-built machines, and the variety manifested in them echoes the many flavors of soldier and warrior.

Among the many Khaki watches out there (the collection is now split into Khaki Navy, Khaki Aviation, and Khaki Field), the Khaki Field King is an impressively affordable mechanical model that features a fully-spelled-out day-of-the-week indicator. Most of the Khaki Field King watches come in naturally polished steel, but this reference H64465733 version is in a black PVD-coated case offering a stealthy personality. 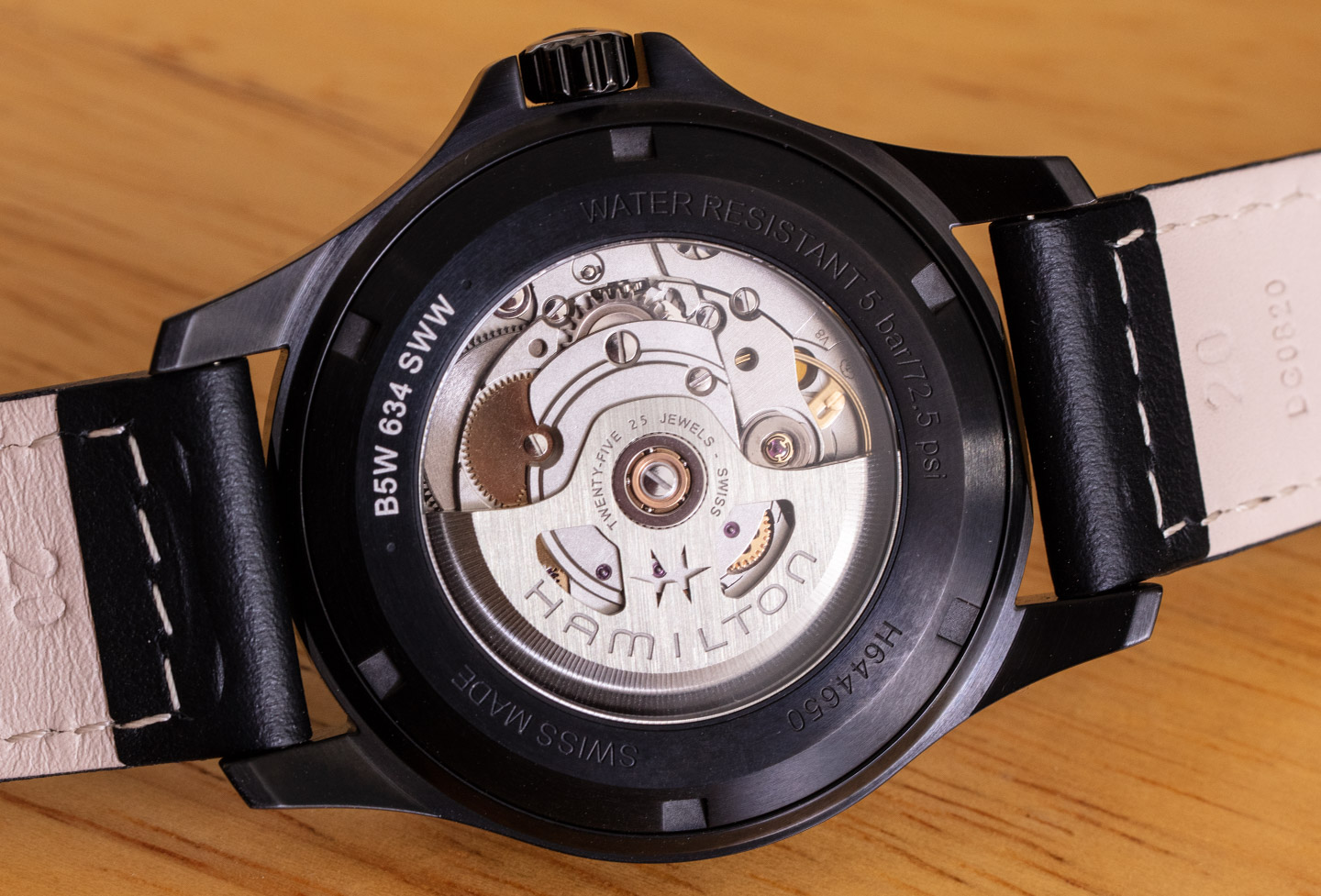 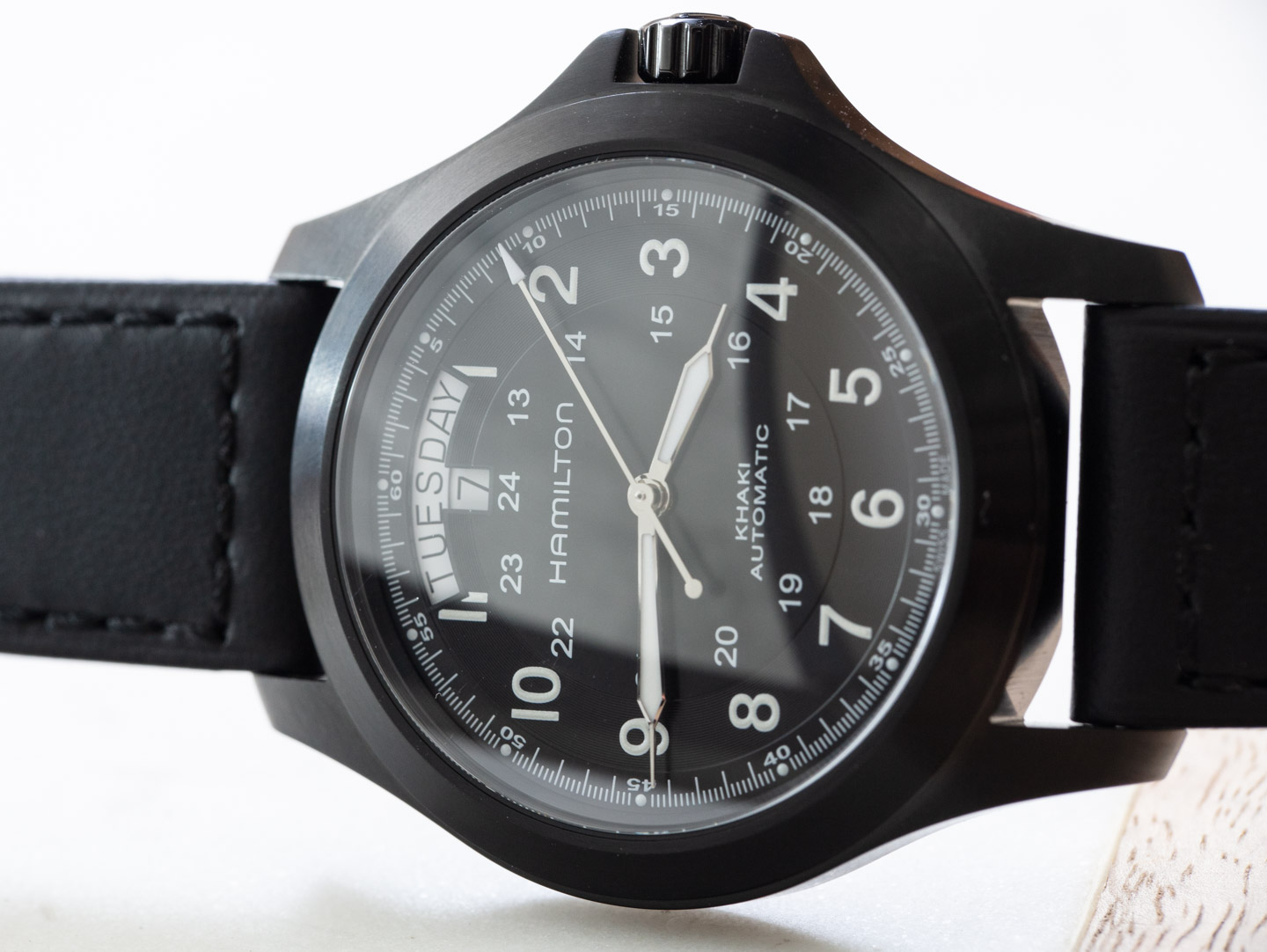 What is so “kingly” about the Khaki King? I’m not really sure. It isn’t the largest-sized, most complicated, or most expensive Khaki watch family out there. Maybe “King” is Hamilton playing on “President,” which is the nickname for the Rolex Day-Date watch. Rolex was the first watch brand, and the most popular, to put a day-of-the-week window at 12 o’clock with the entire day’s name spelled out. Day/date calendar watches are actually rather common today, but most have the day of the week spelled out as a three-letter abbreviation. I could be wrong, but that is my guess for why Hamilton decided that this day/date version of the Khaki Field should be called “the King” (not to be confused with the Hamilton Ventura, which was worn by “the King” Elvis Presley in a movie).

Hamilton offers the Kkahi King in both “King Quartz” and “King Auto” versions, the latter with Hamilton’s H-40 automatic movement. The Swiss Made movement is produced for Hamilton exclusively by sister company ETA and is a 3Hz, 80-hour power reserve automatic movement with the time and day/date calendar complication. The movement is visible through the caseback window of the watch. It isn’t decorated, but Hamilton intentionally opted to forgo such embellishments to keep the cost down. For more money, the company has plenty of decorated movement-based watches out there. Given the infantry soldier theme of the Khaki Field, I don’t mind the movement being an un-decorated little tank in action. 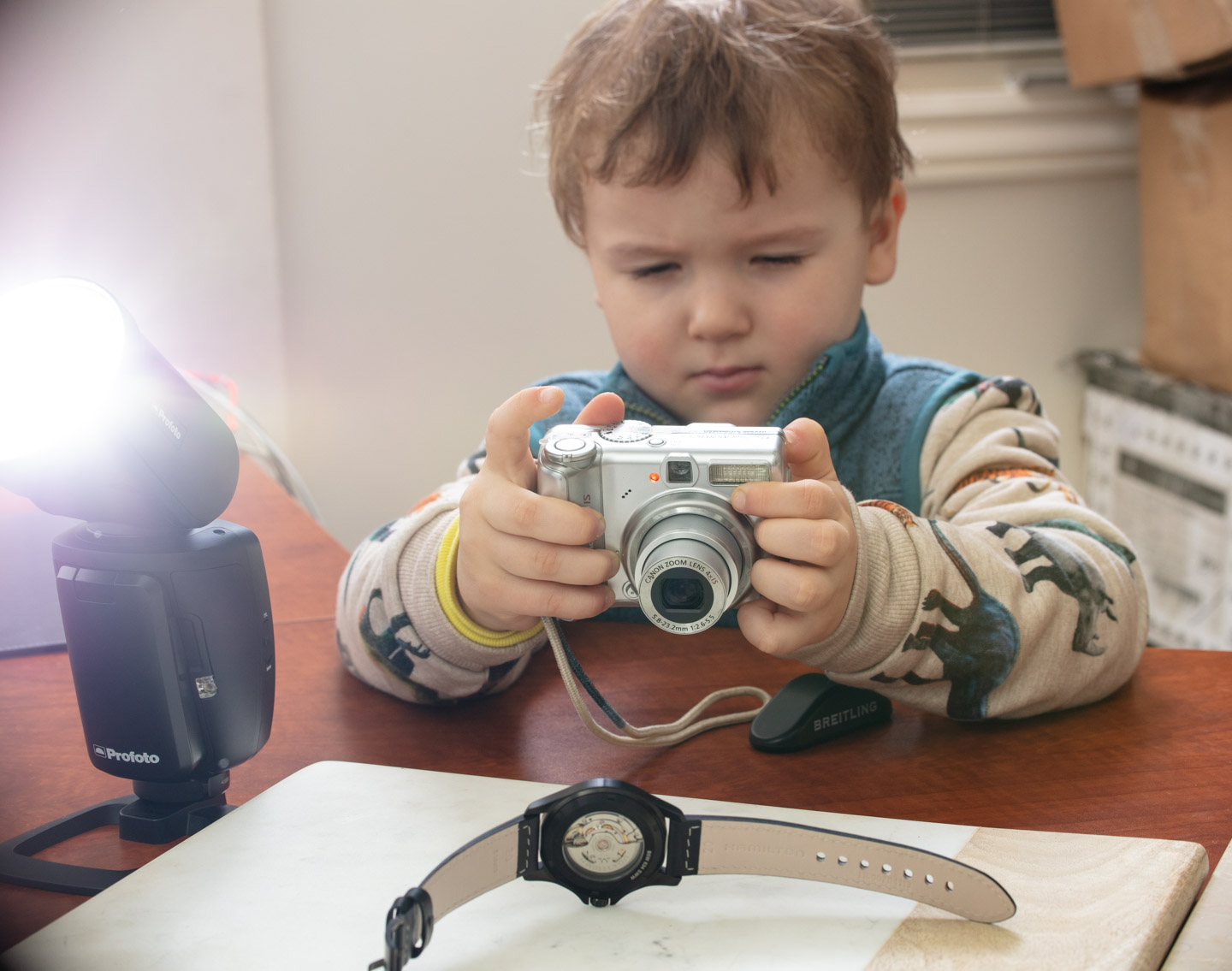 Maybe my photography intern will be able to take over watch shooting duties in the future. 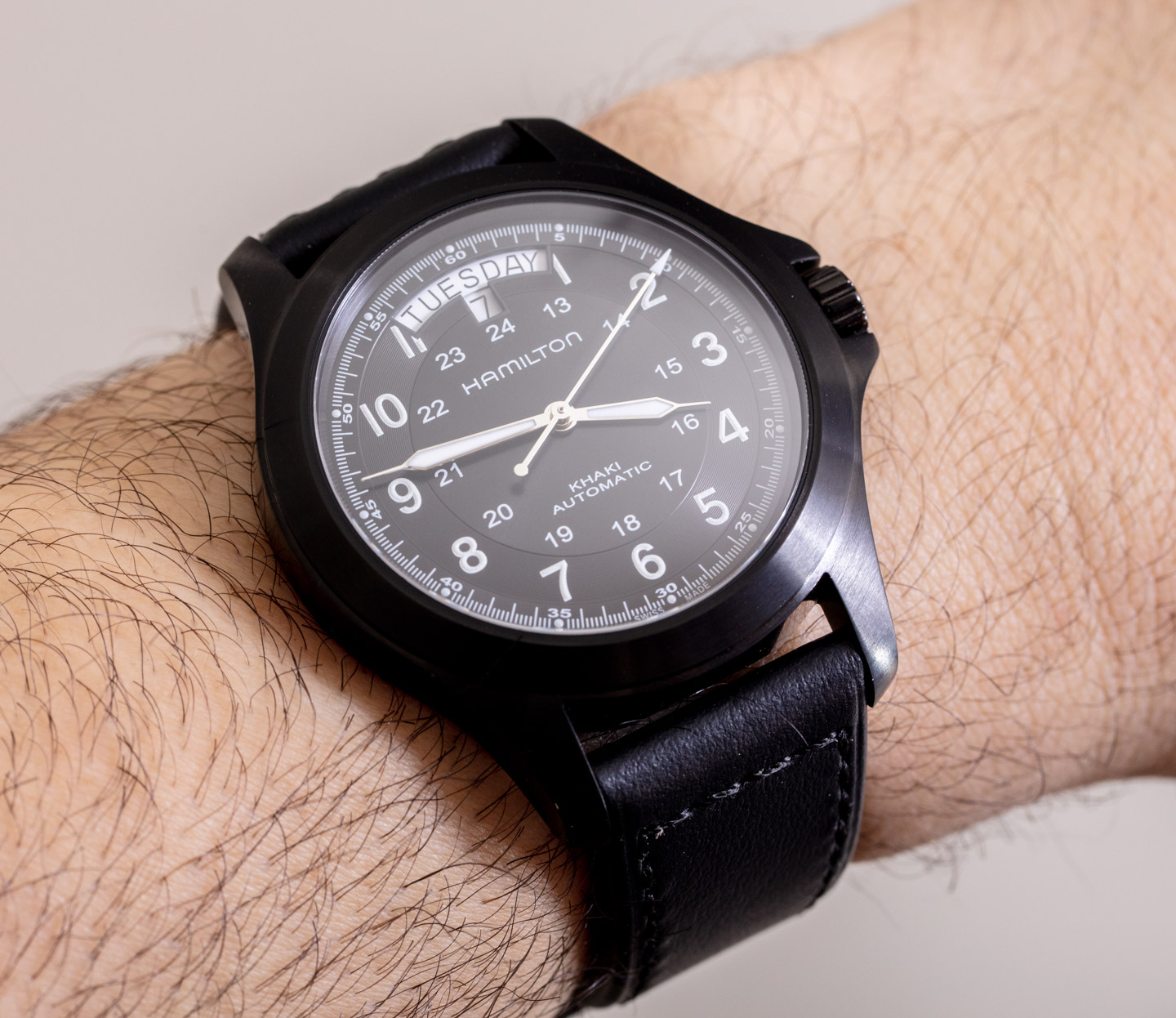 The Khaki King case is 40mm-wide, which, when combined with the relatively broad bezel, makes for a very medium-size wearing experience. The 50-meter water-resistant steel case is also about 11mm-thick and has a roughly 50mm lug-to-lug distance. The brushed black case finishing visually minimizes the look of the watch — so that means in natural steel, the Khaki Field King watch probably feels a bit larger. The dial is all traditional Khaki Field class with some nice shapes and attractive proportions. I did find the hands to be a bit on the shiny side, though the high contrast on the dial allows for the watch to remain very legible.

The dial itself has a t-shaped cutout under 12 o’clock for the calendar windows. Hamilton opted for a symmetrical design layout, putting the date window right under the day-of-the-week window. I’ve never seen this before, and it shakes up the Rolex President display layout, which keeps the date indicator window at 3 o’clock on the dial. A separate scale for a full 24-hour set of markers is part of the military personality of the watch, while the shape of the hands has a personality-rich retro vibe that has been a hallmark characteristic of the Khaki collection for ages now. 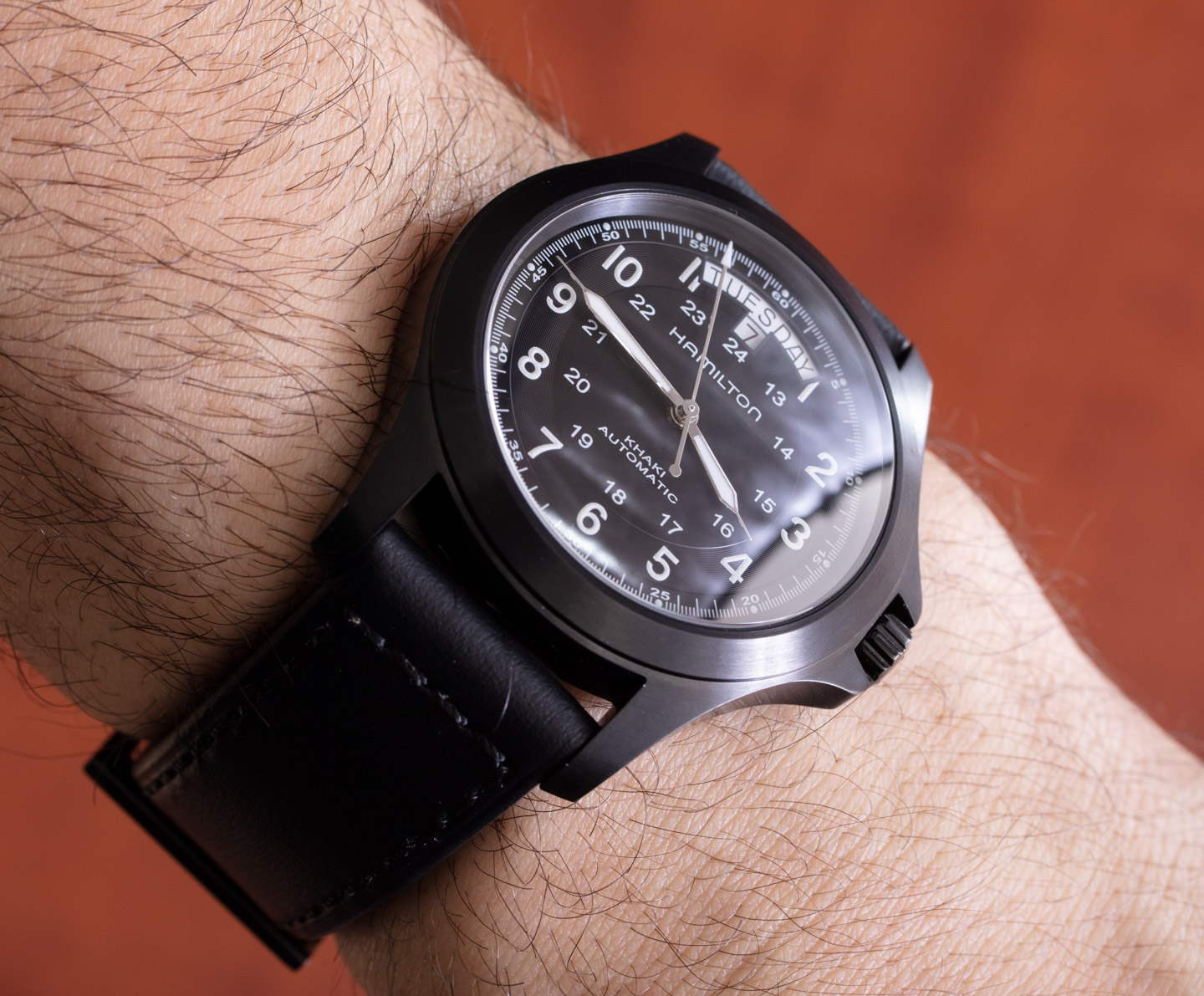 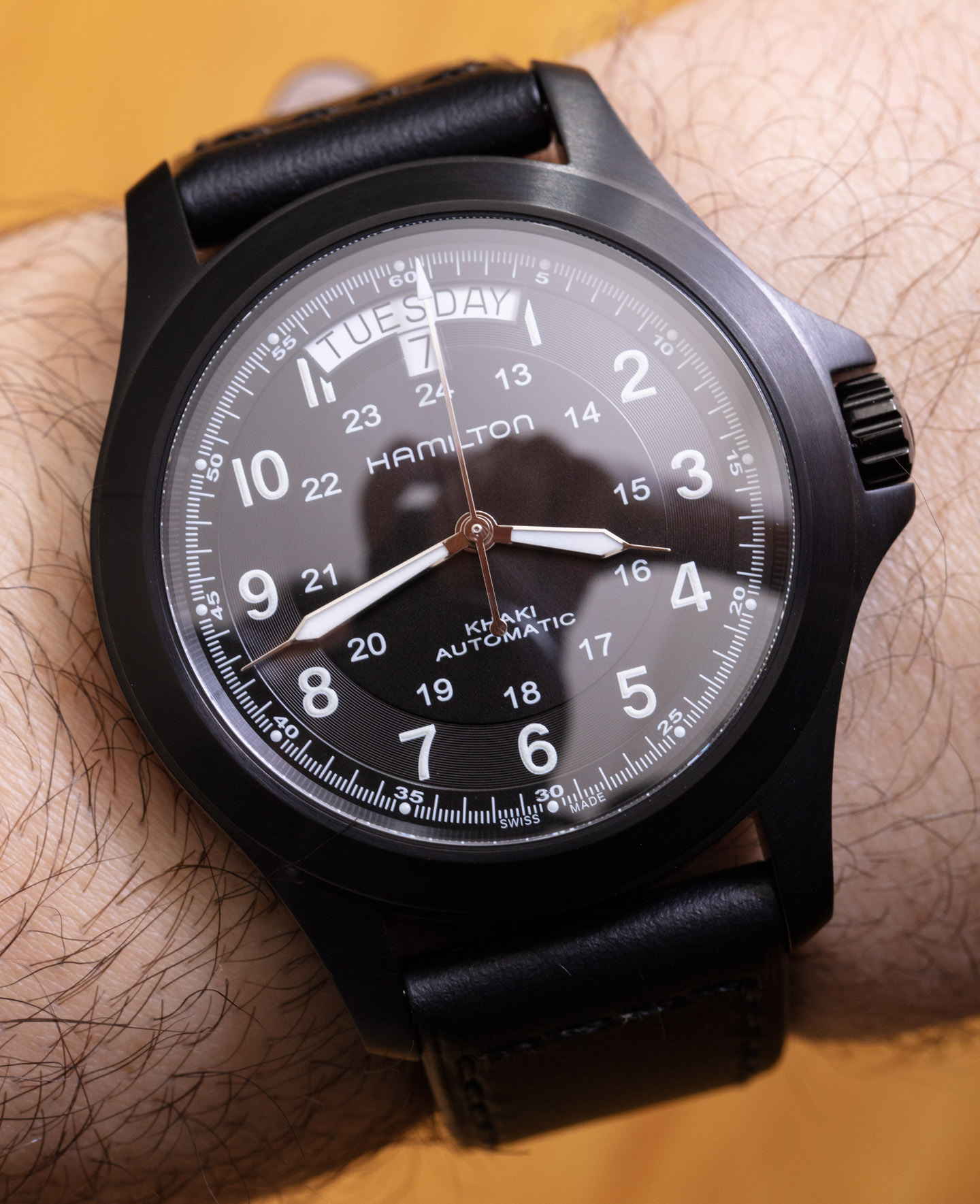 Glare off the domed sapphire crystal is an issue with the watch. A lack of AR-coating and the shape of the crystal make for a fair bit of glare. Some people actually prefer this since, when light plays with a watch, it calls more attention from others. So in a social setting, more glare can actually be a desirable trait. Most watch collectors don’t necessarily think that way if they value a watch for its more utilitarian purposes. Glare on a watch crystal can have an adverse effect on legibility because of the reflected light. Never is the Khaki Field King watch not legible due to glare (as is the case with many other watches), but the clean, reflection-free look of purist tool watches is not what Hamilton was going for in this model. 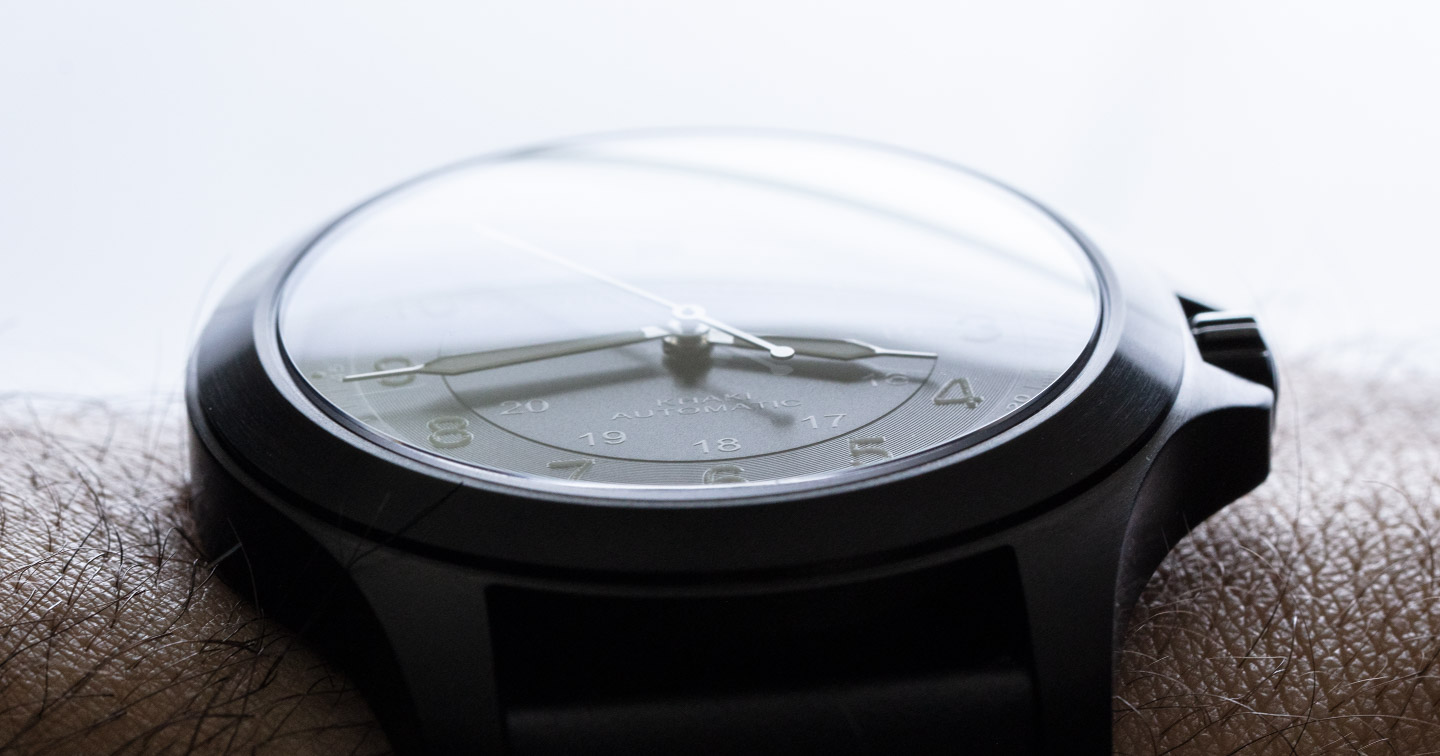 That makes the Khaki Field King among the more lifestyle (i.e., fashion-focused) versions of the Khaki model out there, which is totally understandable and expected given what I mentioned above about the very large family of Khaki watches out there. Attached to the case is a high-quality black leather strap, though its matte-black color is a bit less than exciting. I have a feeling that, on a black NATO strap, the Hamilton Khaki Field King would be just a bit more interesting, but in reality, a black watch such as this can be paired with any strap color you like. A solid value for sure, the price for the Hamilton Khaki Field King reference H64465733 watch is 650 Swiss Francs. Learn more at the Hamilton website here.

Necessary Data
>Brand: Hamilton
>Model: Khaki Field King reference H64465733
>Price: 650 CHF (Swiss Francs)
>Size: 40mm-wide, ~11mm-thick, and ~50mm lug-to-lug distance.
>When reviewer would personally wear it: Actually, with a black suit when I didn’t feel like a dress watch was in order. A good office watch, as well.
>Friend we’d recommend it to first: Someone who loves military tool watches who really needs a nice-looking social watch that has a conservative, lasting vibe to it.
>Best characteristic of watch: Hamilton offers a lot for the money, including a long power reserve movement and attractive dial. Handsome in black, even if it changes the visual wearing size.
>Worst characteristic of watch: Glare off crystal could be reduced. Strap could be accused of being dull, but it is versatile and conservative. Movement view begs for a few more traditionally finished surface treatments.