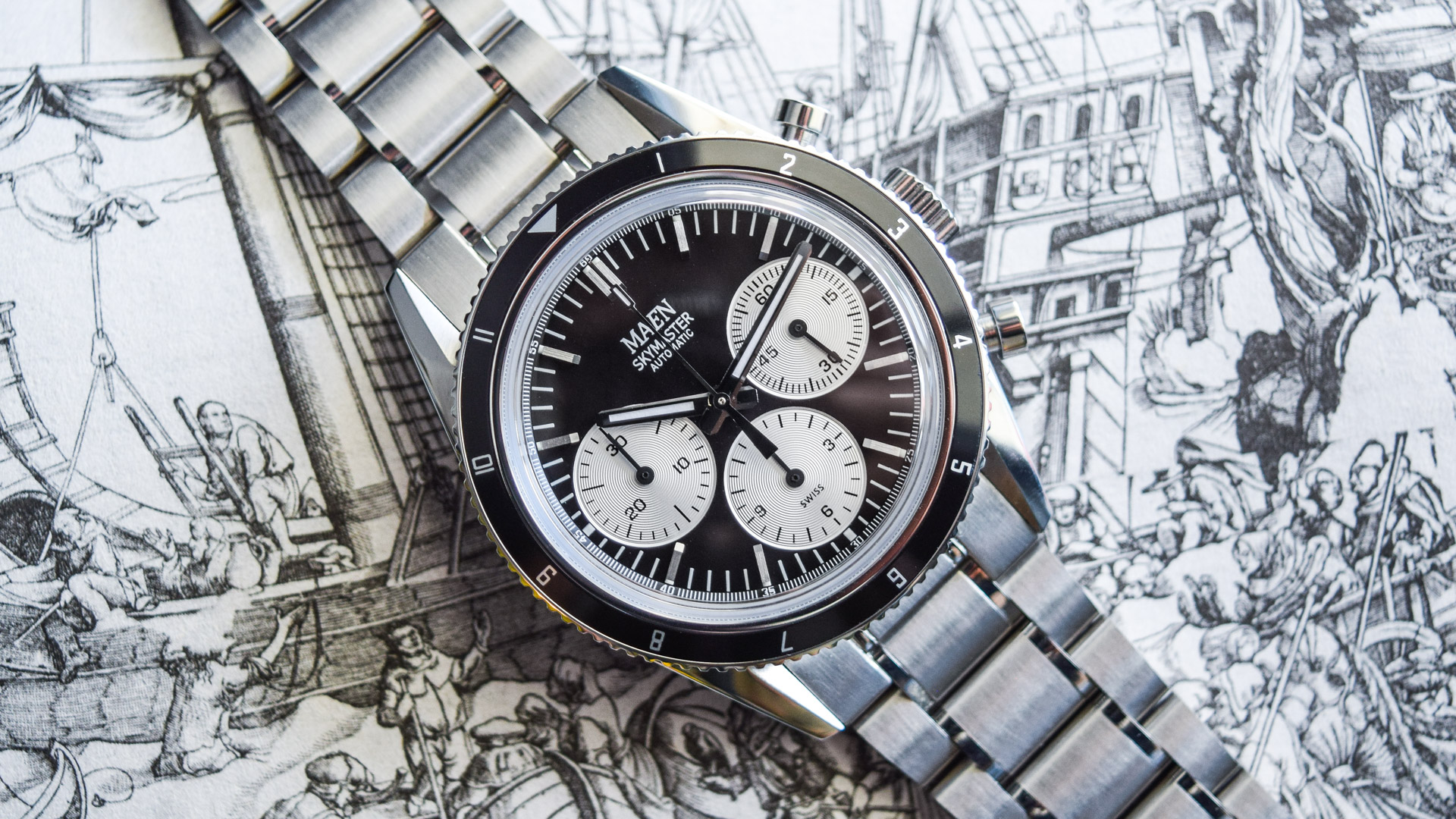 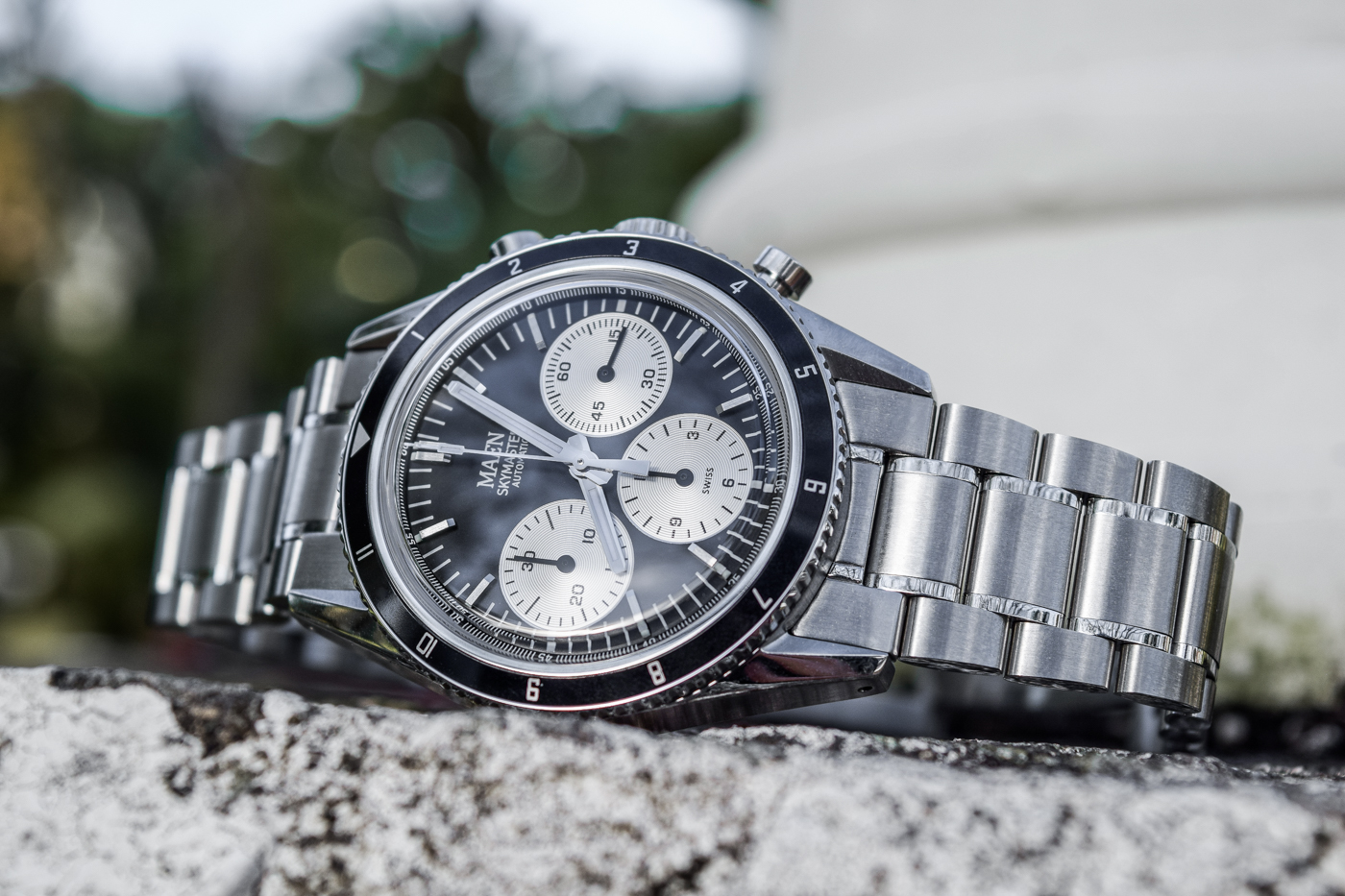 After the success of its vintage-inspired, diver’s-style Hudson, Maen Watches — founded by two Dutchmen but based in Stockholm — looked for inspiration in another popular heritage concept: the automatic sports chronograph popularized in the late 1960s. Where the Hudson drew the majority of its DNA from the Rolex 6538, the new Skymaster 38 from Maen is a loving ode to pilot’s and sports chronographs from the golden age of watches, like the Daytona and El Primero. But I’d say that the Skymaster, like the Hudson I reviewed almost two years ago, manages to keep just enough of its own identity to stand on its own four lugs. 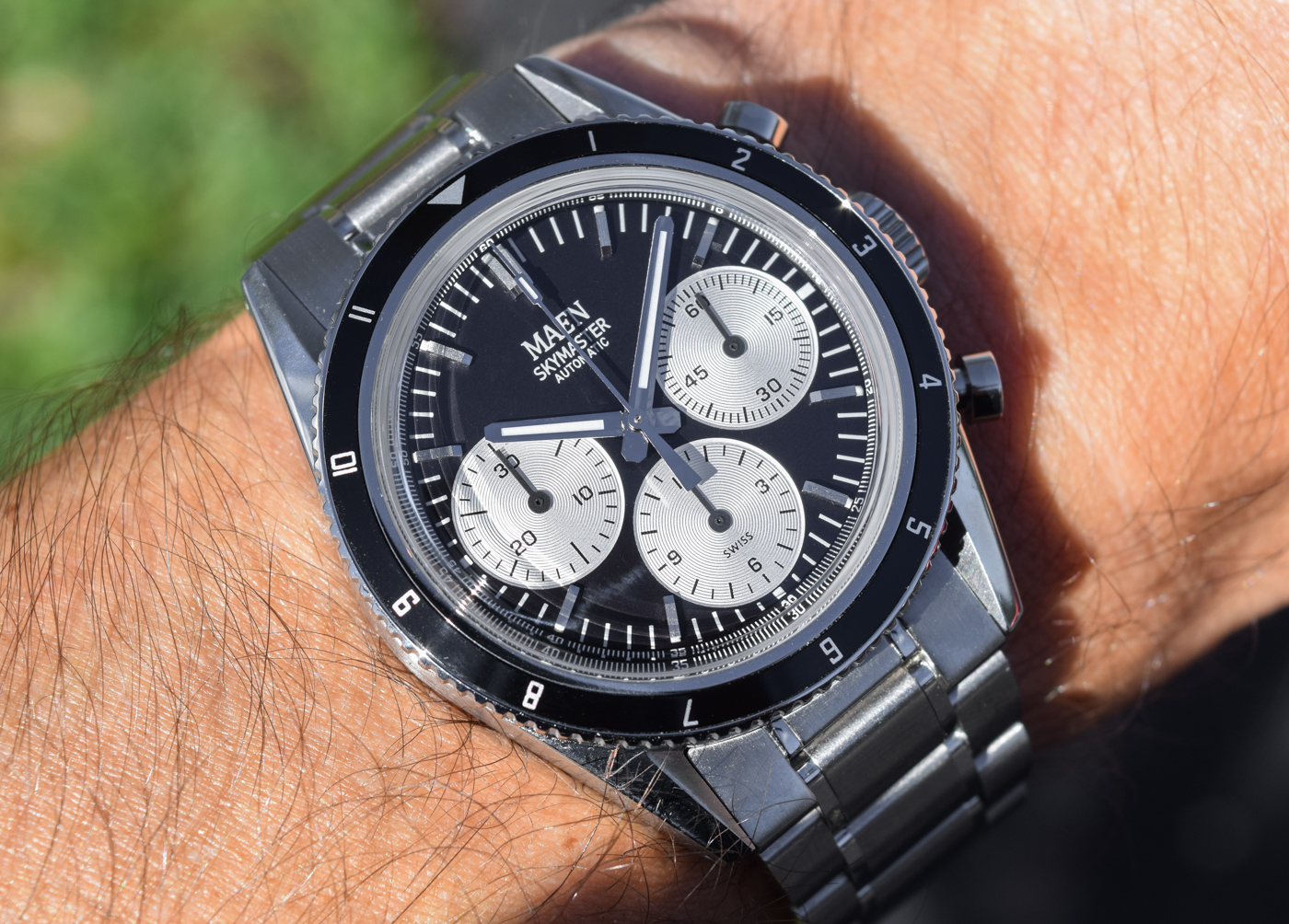 Maen’s Skymaster also represents a significant jump in terms of price point for the brand. Now equipped with the STP1-11 (the Hudson utilized the ETA 2824-2 when initially released), the Hudson retails for around $500, a strong value considering what you get in terms of vintage vibes and Swiss-made construction, but the new Skymaster 38 with its modular ETA 2894-2 will set you back somewhere around a cool $1,000, depending on the exchange rate and strap or bracelet option, which is potentially a screaming deal for a Swiss automatic chronograph. The question then becomes: Has Maen done enough to justify this move in the direction of the upmarket?

As a lover of dive watches and all things diving, I’m stepping a bit out of my comfort zone with the aviation-oriented Skymaster to see how it stacks up in a crowded microbrand scene. 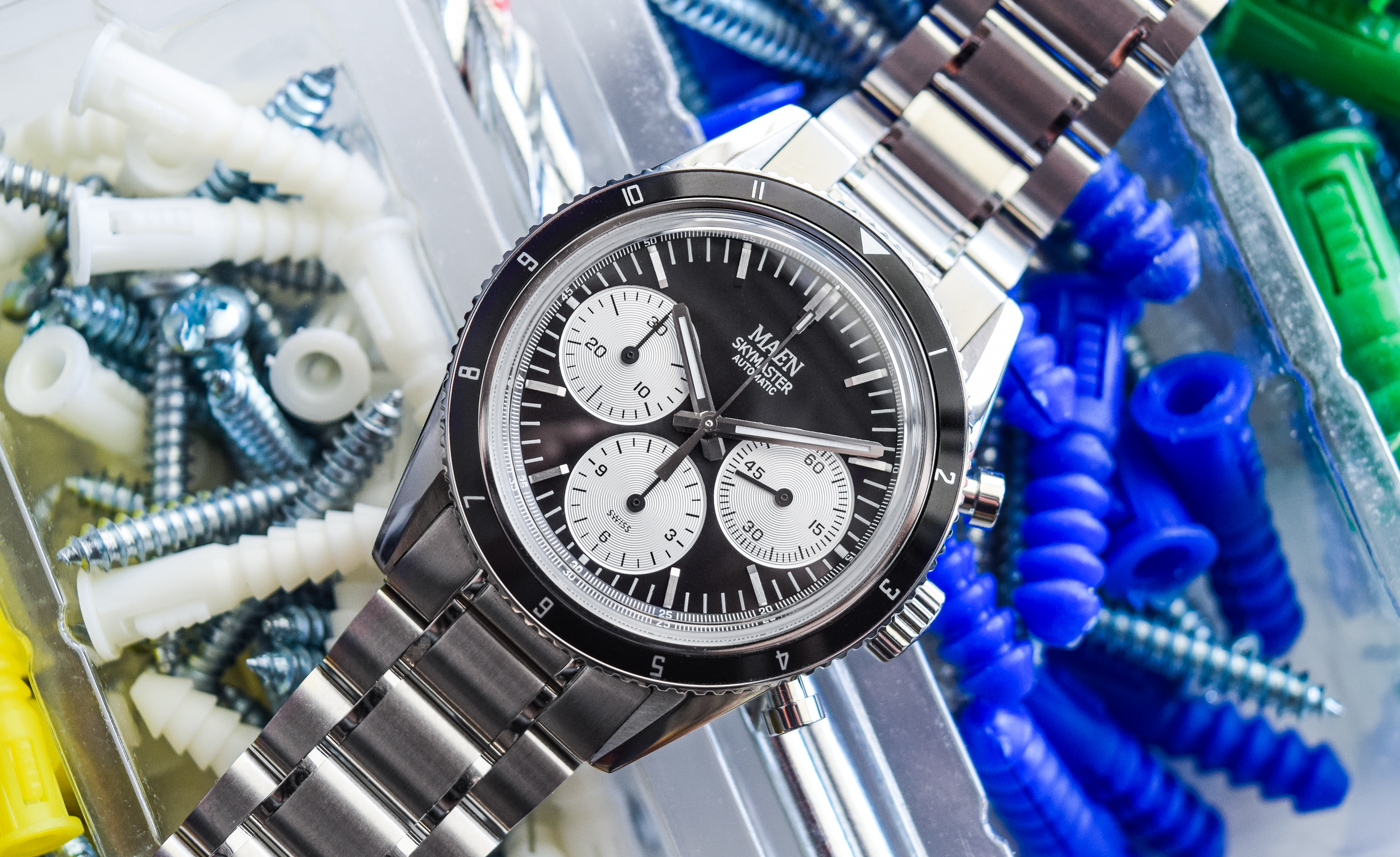 Microbrand Chronographs, or the Lack Thereof

Before getting too far into the Skymaster itself, we need some context. Glancing across the more popular microbrands, we are confronted with a sea of three-hand automatics, most of which are of the diver’s or everyday style, with the odd modular GMT sprinkled in for effect. Frankly, there just aren’t that many microbrand automatic chronographs on the market, likely an effect of the cost associated with mechanical chronograph calibers and the position of most microbrands, which tends to be oriented more toward the entry level. Most often, the consumer considering an automatic chronograph is left with options from major brands often at major price points, which makes this Maen Skymaster all the more compelling. 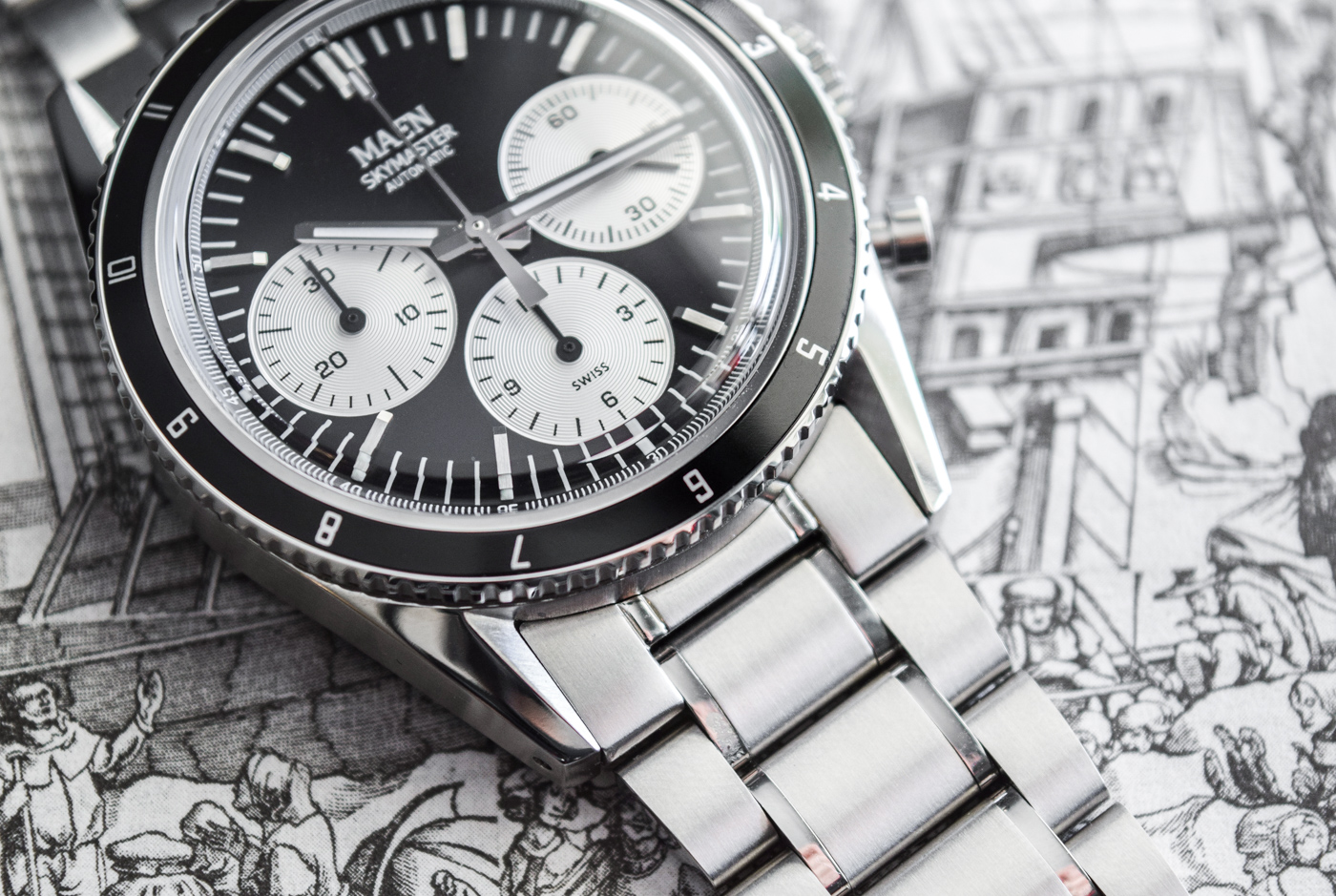 One aspect of Maen’s overall approach is the wide array of variations offered by the brand for each of its models. The Hudson came in either 38 or 42mm, with black or blue dials, with or without a date, and with different chapter rings, and that’s all before you select whether you’d like a strap or bracelet. While available in only one size (38mm), the Skymaster does come in a wide array of dial variants, though when asked, I had to go for the white on black “reverse panda” configuration so well known to watch enthusiasts from a certain brand you may know whose vintage chronographs have reached a more-than-modest level of popularity in recent years. Moving on.

Set against a sandblasted matt- black primary dial surface, the Skymaster dial has a dressier, upmarket feel compared to the Hudson, thanks to applied three-dimensional rectangular polished steel hour markers, each with the tiniest blob of lume at their outer end, paired with polished baton-style hands that also feature a narrow band of luminescent material. While lume is always a nice feature on a sports watch, the lume on this piece isn’t great and doesn’t last particularly long, though I’m confident your phone could also provide the time in a pinch. 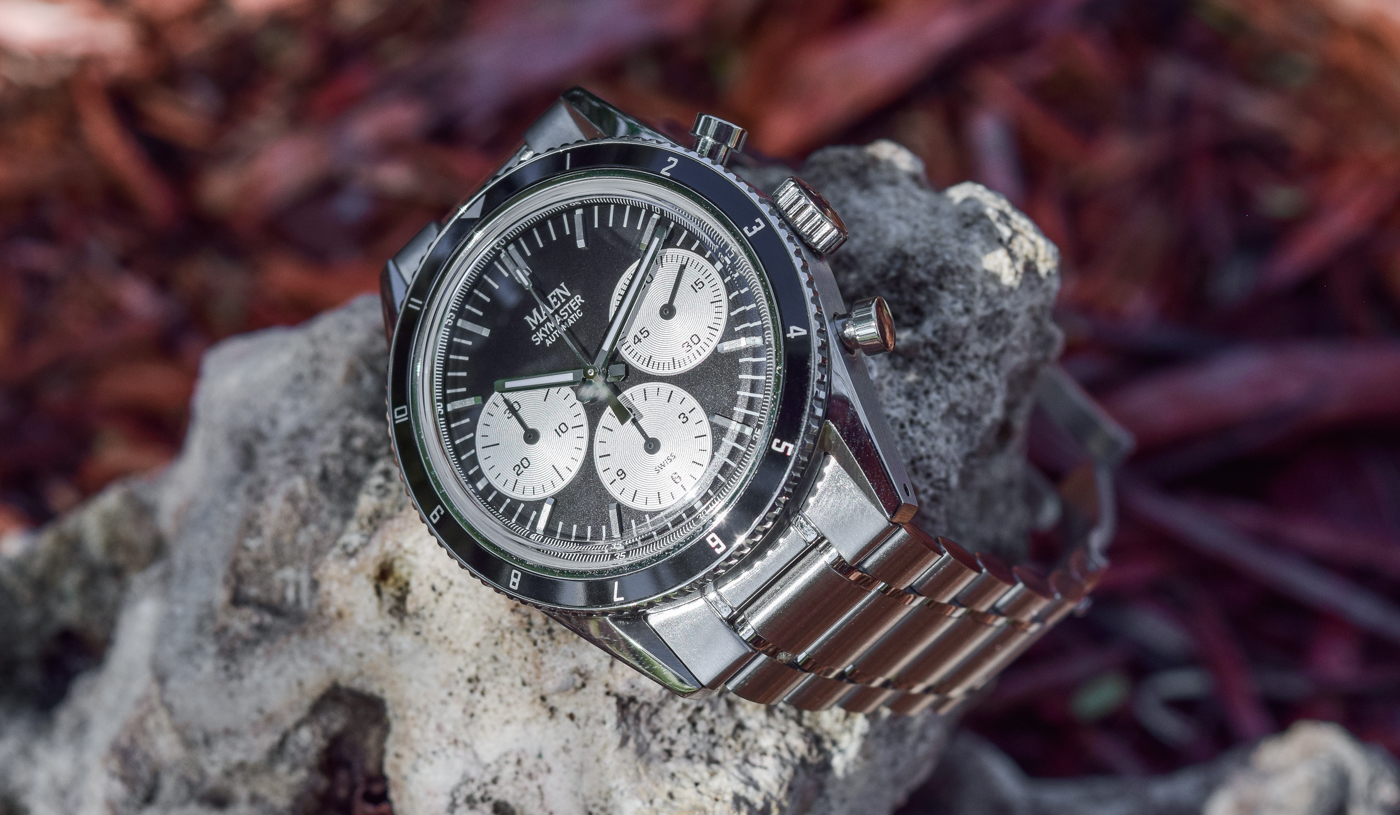 Minute tracking is handled with simple printed white hash marks between the indices, and a very narrow chapter ring, set at a steep angle to the dial, is again printed white-on-black with Arabic numerals at the five-minute positions with what appears to be 1/5th of a second graduations between, though it’s been a while since I got new glasses.

Adding contrast to the Skymaster dial design are the white sub-registers, the source of the reverse panda nickname, and a powerful nod to the 1960s chronographs from which this watch draws much of its inspiration. Thankfully, without a date function, and with the sub-registers placed in the 3, 6, 9 arrangement, this dial is attractive, symmetrical, and legible, while giving a more luxurious feel than you’d expect for the price. Well played, Maen. 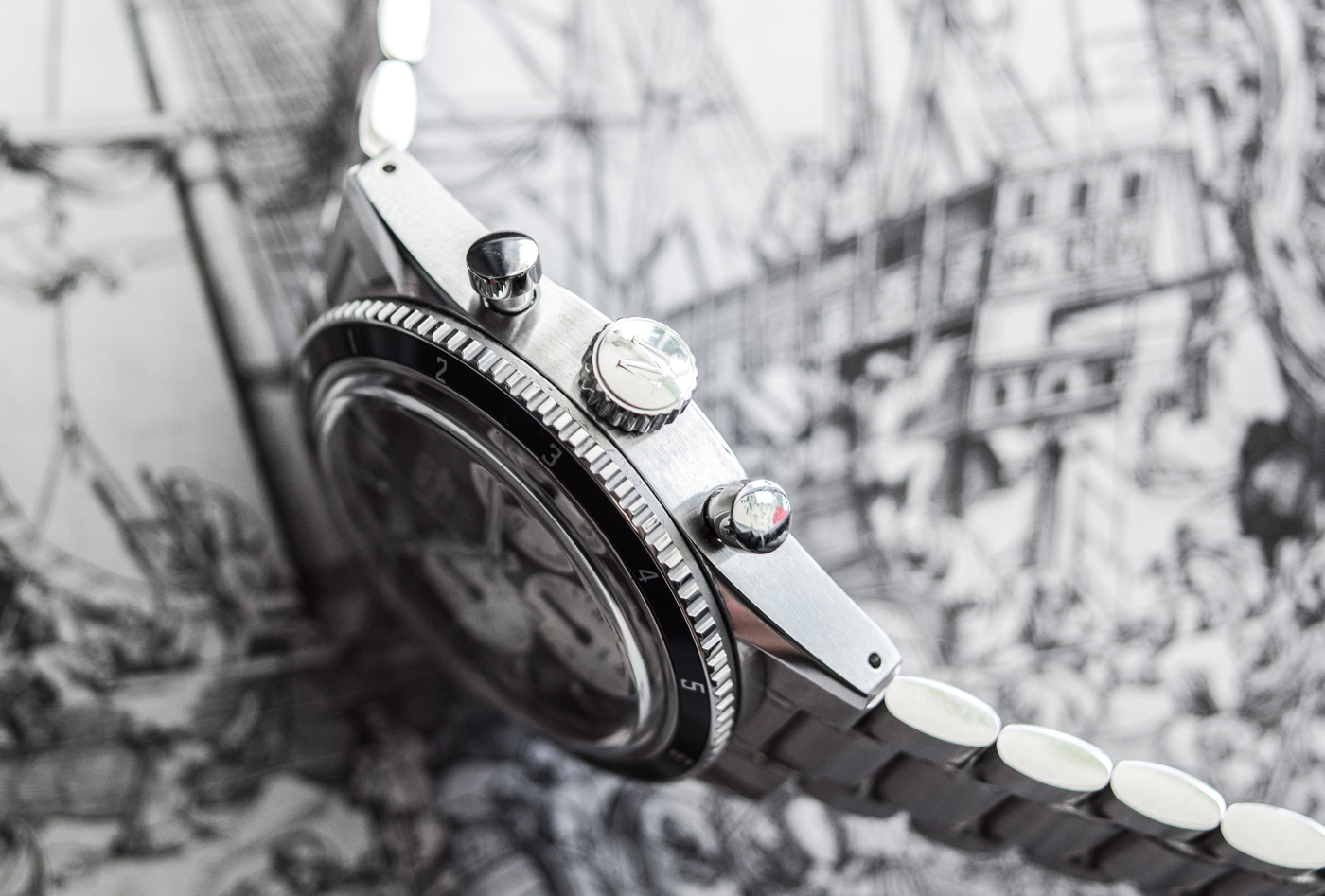 Building on the more luxurious feel presented by the Skymaster is a well-done and slim case design highlighted by a pair of prominent faceted lugs, which are drilled, brushed on their inner surface, and polished elsewhere — a nice contrast to the steep brushed case sides. Along the 3 o’clock side of the case, we have the traditional chronograph layout with pump pushers flanking a signed, non-screw down crown, though the Skymaster does offer a reasonable 50 meters of water resistance I won’t be testing anytime soon. In use, the pushers offer positive action and a loud click that really lets you know you’ve done what you set out to do, though it isn’t quite as good in terms of tactile feedback compared to (admittedly much more expensive) column-wheel operated chronograph calibers.

Reinforcing the travel or aviation theme of this piece is a narrow, bi-directional bezel complete with a 12-hour aluminum insert, which keeps the vintage vibe strong while legitimately adding even more utility beyond the already useful chronograph. 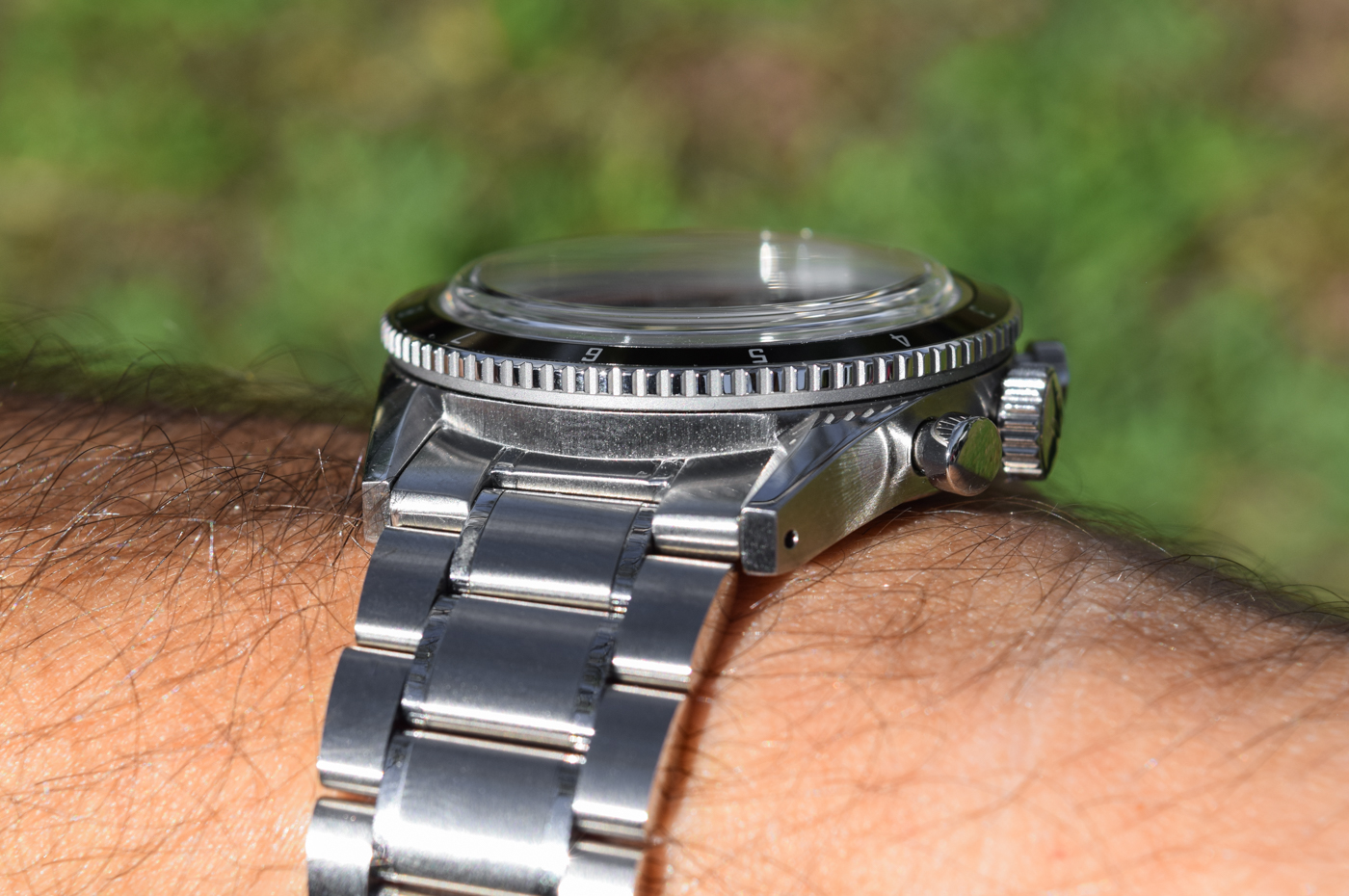 Again making for a bevy of options, the Skymaster can be had either with a box section acrylic crystal or a similarly profiled sapphire glass at an additional expense. While the acrylic vs. sapphire argument is at times approaching Hatfield and McCoy levels of rivalry I won’t get into, suffice it to say that acrylic is a nice option that is perhaps more resistant to big shocks without the risk of shattering but will scratch easily, though it can be polished just as easily, whereas it’s really hard to scratch sapphire, but easier to shatter it compared to acrylic. That’s as far as I’ll go.

In terms of wear, this 38mm-wide by 47mm lug-to-lug case is excellent on the wrist, especially if you are, like me, on the smaller end of the spectrum in terms of wrist size or simply accustomed to the dimensions of vintage watches. The height of only 12.9mm is also pretty respectable for an automatic chronograph, especially when you consider that the case height without the crystal is only 10.9mm, truly svelte for something like this, and a watch that’ll easily make its way under a cuff without any help, a factor aided by the bracelet.

This bracelet, yet another option in addition to an excellent tropic-style rubber strap, is frankly pretty nice for the price, with an overall brushed finish and little polished elements on either side of the center link. Starting at 20mm at the lugs, this bracelet also tapers to a vintage-feeling 16mm-wide clasp that is operated with a two-button release. My only real gripe here is the high level of difficulty I had in adjusting this bracelet, which features screwed links. It could be there was simply too much Loctite on the screws in this particular sample, but even with all of the correct tools and a fair amount of experience in this sort of thing, it took me a while, and I left a few screw heads worse for wear. 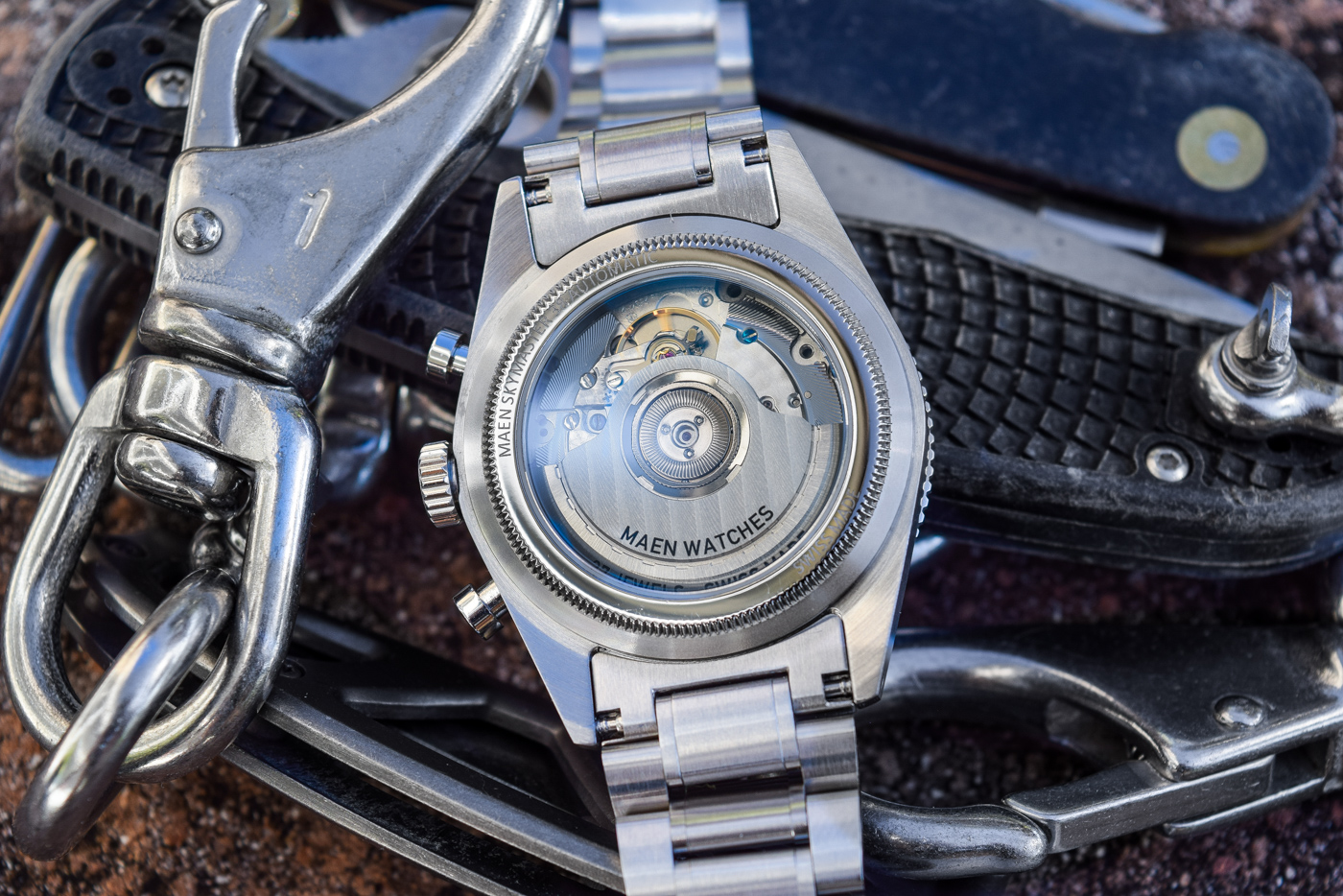 Flipping the Skymaster over, we have a mineral glass keeping watch over what is perhaps the single biggest value proposition in this watch, the ETA 2894-2, a modular execution of the venerable 2892, a caliber lauded for its higher level of refinement and slimmer build compared to the 2824 you probably know. Even with the chronograph module on top and of course a rotor, the 2894 still only comes in at 6.1mm compared to a svelte 3.6mm for the basic 2892. Still, compared to the portly Valjoux 7750 at 7.9mm, the 2894 is a slimmer, less expensive option that seems to do the job as well as can be expected in this price range.

In terms of spec, the 2894 mirrors with the 2892, beating at 28,800 vph or 4 Hz, featuring hacking and hand-winding, and a 38-hour power reserve, certainly not bad for the money. The sample I reviewed also kept time at a more than adequate +6 sec/day average when worn. It is important to accompany any mention of a modular movement with the realities regarding servicing. Quite simply, many watchmakers will not service modules should the need arise, instead simply opting to replace the module itself or in some cases the entire movement, a potentially expensive fix that potential buyers should be aware of. But again, at this price, you probably haven’t thought that far ahead. 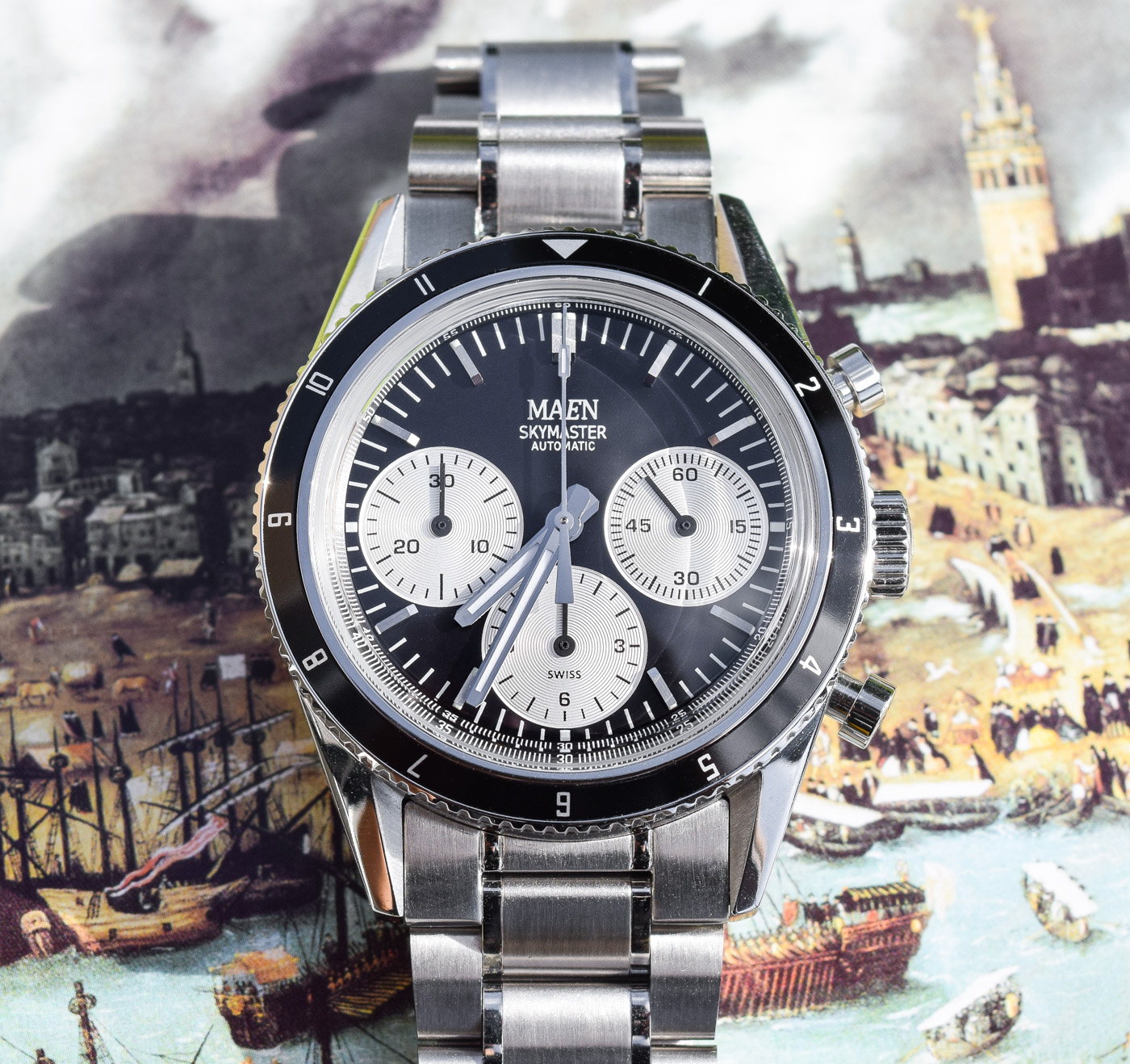 Taken together, this Maen Skymaster is another strong effort from one of the more charming microbrands in recent memory, both in terms of visual design and also the inclusion of the 2894 caliber. And, scanning the Internet and the microbrand landscape, there simply aren’t a lot of options in this price range for an automatic chronograph at all, and even fewer that exemplify a nod to a design era without dipping a toe too deeply into homage territory.

In terms of what you get for the money, I’m not sure you can do a lot better if you’re looking for a vintage-style chronograph with tastefully executed design elements and of a sort of travel or aviation-inspired style. Again, comparing this watch to Maen’s Hudson, the Skymaster does feel like a pretty significant jump in terms of execution and value that will likely present a Goldilocks-type impression for a lot of microbrand buyers out there. The Maen Skymaster 38 is available for preorder from MaenWatches.com for around $1200 (depending on exchange rate) as reviewed with the bracelet and sapphire crystal upgrade.

Necessary Data
>Brand: Maen
>Model: Skymaster 38
>Price: $1,200 as reviewed depending on exchange rate.
>Size: 38mm-wide x 12.9mm-thick x 47mm lug-to-lug.
>Would the reviewer personally wear it: Yes.
>Friend we’d recommend it to first: The fan of vintage Mid-Century aviation and design looking for a sporty chronograph without the need for a second mortgage.
>Worst characteristic of watch: The bracelet certainly gave me some trouble but was actually pretty nice, once sized. Perhaps, as I often tell my wife, I am simply too strong?