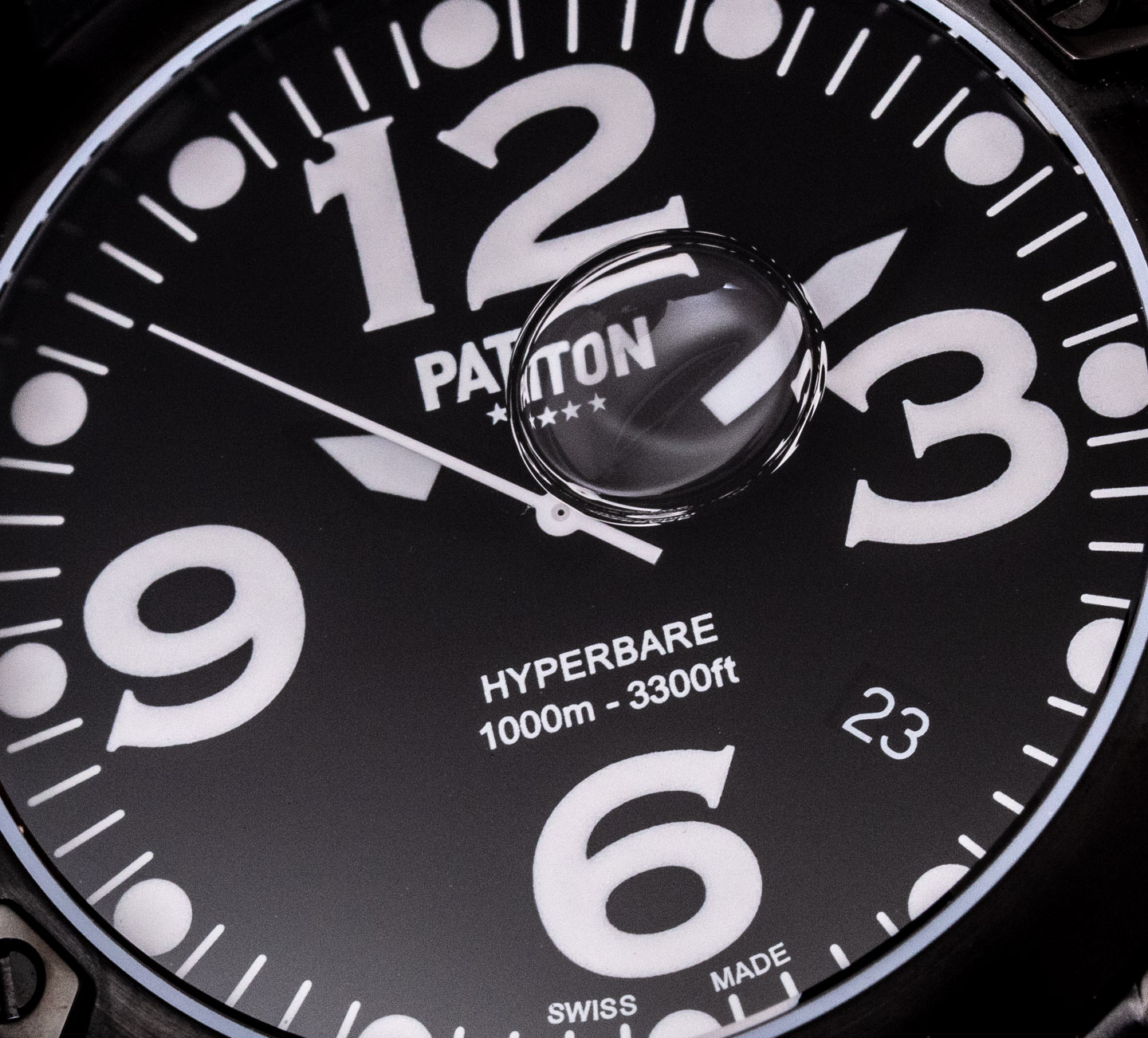 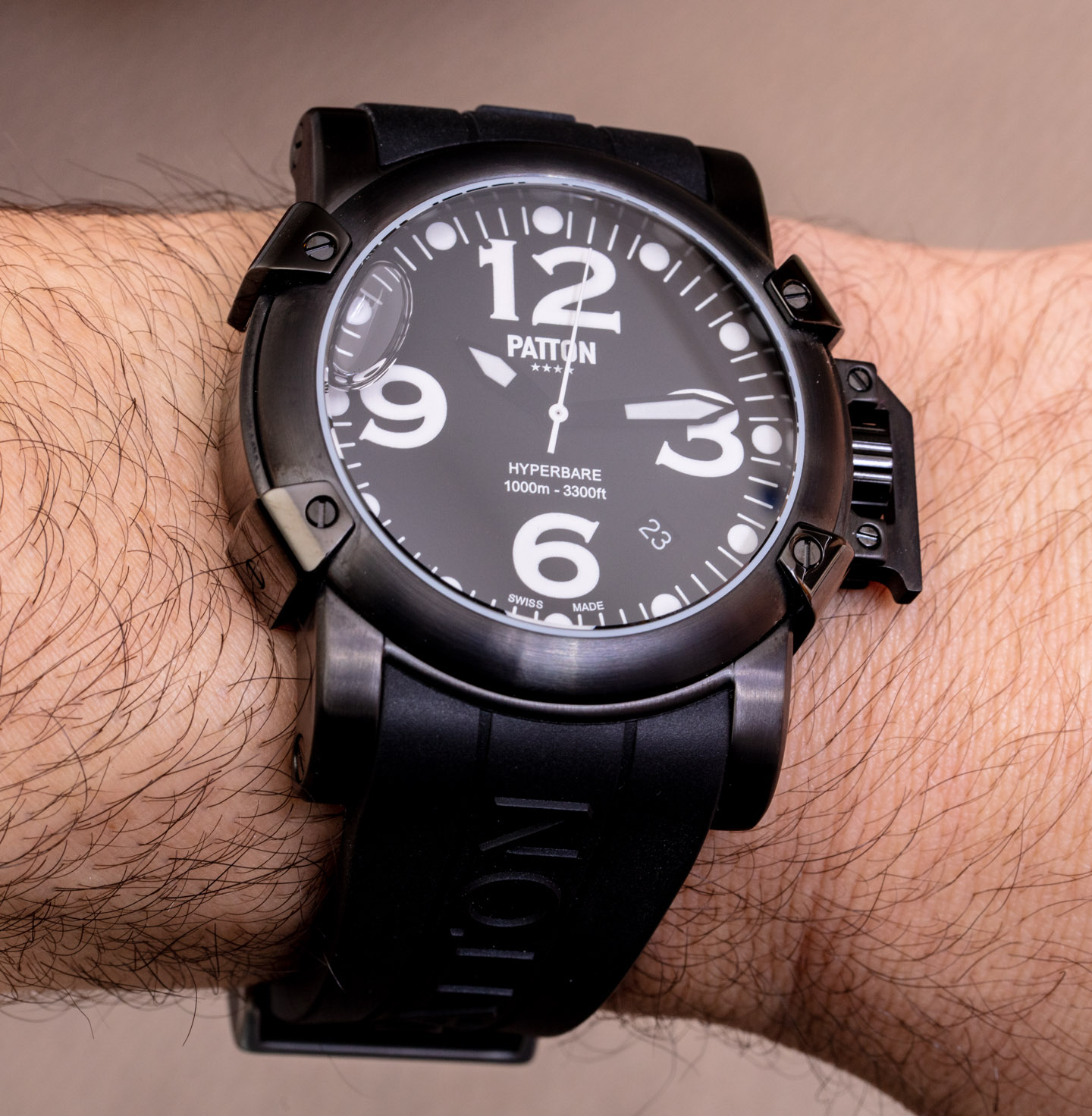 One of the things that brings me a lot of joy as I approach nearly 15 years of writing about watches is when something from the past comes back to greet me. Such is the case with the watch brand Patton, which I originally covered on aBlogtoWatch back in 2011. At the time, the brand was fresh and I wrote about its Hyperbare model — a relatively attractive macho diver’s watch that features a dial filled with liquid. Now, in 2021, I have the Hyperbare 1000M watch to review — never something I would have imagined, as the brand was shut down for at least a while.

Some watch brands have that kind of resiliency. Even from deep hibernation, they can return with new energy and gusto. New leaders at Patton are trying to bring the brand back, and I think the effort has some merit. New models are probably on the horizon, but it’s worth checking out these original Hyperbare models that are still available today.

The Patton brand is, indeed, related to the American four-star General who died in 1945. The Patton name comes from his family, and the brand — with its four stars under the logo — is inspired by the man. His story is an impressive one. He was born not too far from where I grew up in California, and he was among the most important leaders in American’s fight as part of World War II. I first became familiar with General George Patton as a child when my father compelled me to watch the 1970 film biopic about him. Patton received numerous Academy Awards, including best picture and best actor. It has a famous opening speech by actor George C. Scott, who played General Patton.

General George Patton himself died in 1945 (in a freak car accident, of all things) but his name lives on through the family, and somehow, they ended up working with a watchmaking partner. The brand had some popularity in parts of France and Belgium, but the products really never officially made it to the United States. The new managers of the brand certainly wish to change that, and they hope the brand and its products have interest elsewhere, too. I think what Patton will quickly learn is that it needs to employ a lot more context in the brand’s storytelling, especially because understanding the background and the products requires a deep level of contextual understanding.

The Patton P42 Hyperbare that was announced back in 2010 is similar to, but not exactly the same as, the Patton Hyperbare 42mm watches that eventually came out on the market. There are some cosmetic differences mostly related to production issues but also other changes, such as the amount of liquid in the case. That’s right, the Hyperbare is a liquid-filled watch — which means there is a bubble on the watch dial. The purpose of the bubble is to allow for the liquid to have some volume to expand into, which is relevant as the watch goes deep underwater. The original model had a slightly smaller bubble. 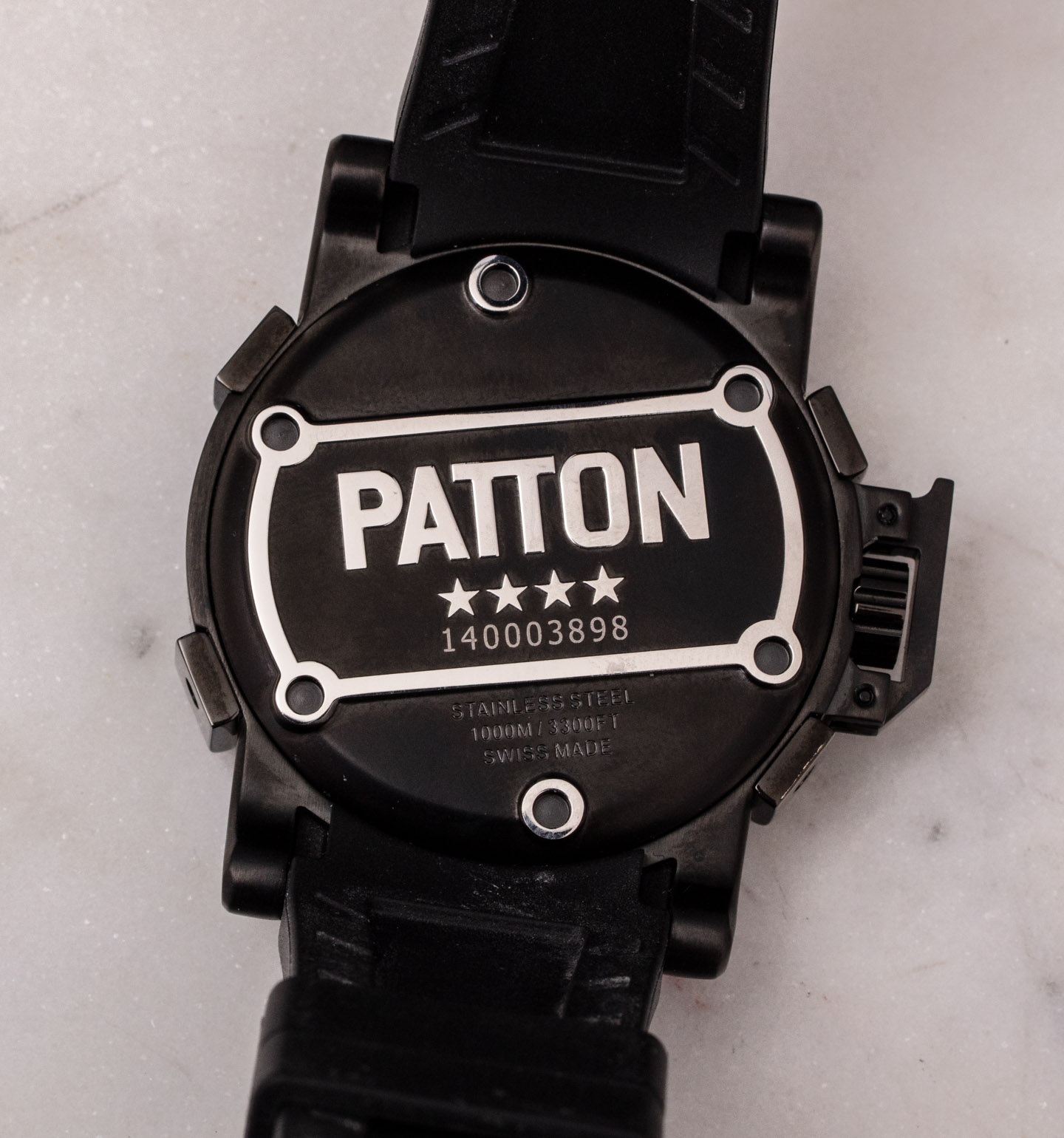 The liquid itself is probably still mineral oil, and the idea behind it is to allow for a watch to be more pressure-resistant. The concept is simple. Liquid is more dense than air, thus filling a watch case with liquid means that more pressure is required to crush the watch. Back in 2010, Patton had more or less the same exact companies to compete with when it comes to liquid-filled watches — really, only German Sinn comes to mind, which produces its own liquid-filled watches with the UX collection.

Sinn’s current liquid-filled watches boast 5,000 meters of water resistance, while Patton’s Hyperbare has 1,000 meters. There are plenty of 1000-meter dive watches that aren’t filled with liquid. Does that make this a gimmick? Yes and no. Yes, in the sense that Patton cannot claim the liquid is necessary to achieve this level of water resistance. No, in the sense that, while the Hyperbare isn’t record-breaking, it is still a tool watch. The piece is well-conceived in its focus on being a diver’s watch, and the presence of the liquid not only looks cool but also has an effect on the legibility. The liquid acts as a sort of magnifier and helps create the illusion that the dial is set up right against the sapphire crystal when viewing the watch from angles. It is a cool effect. 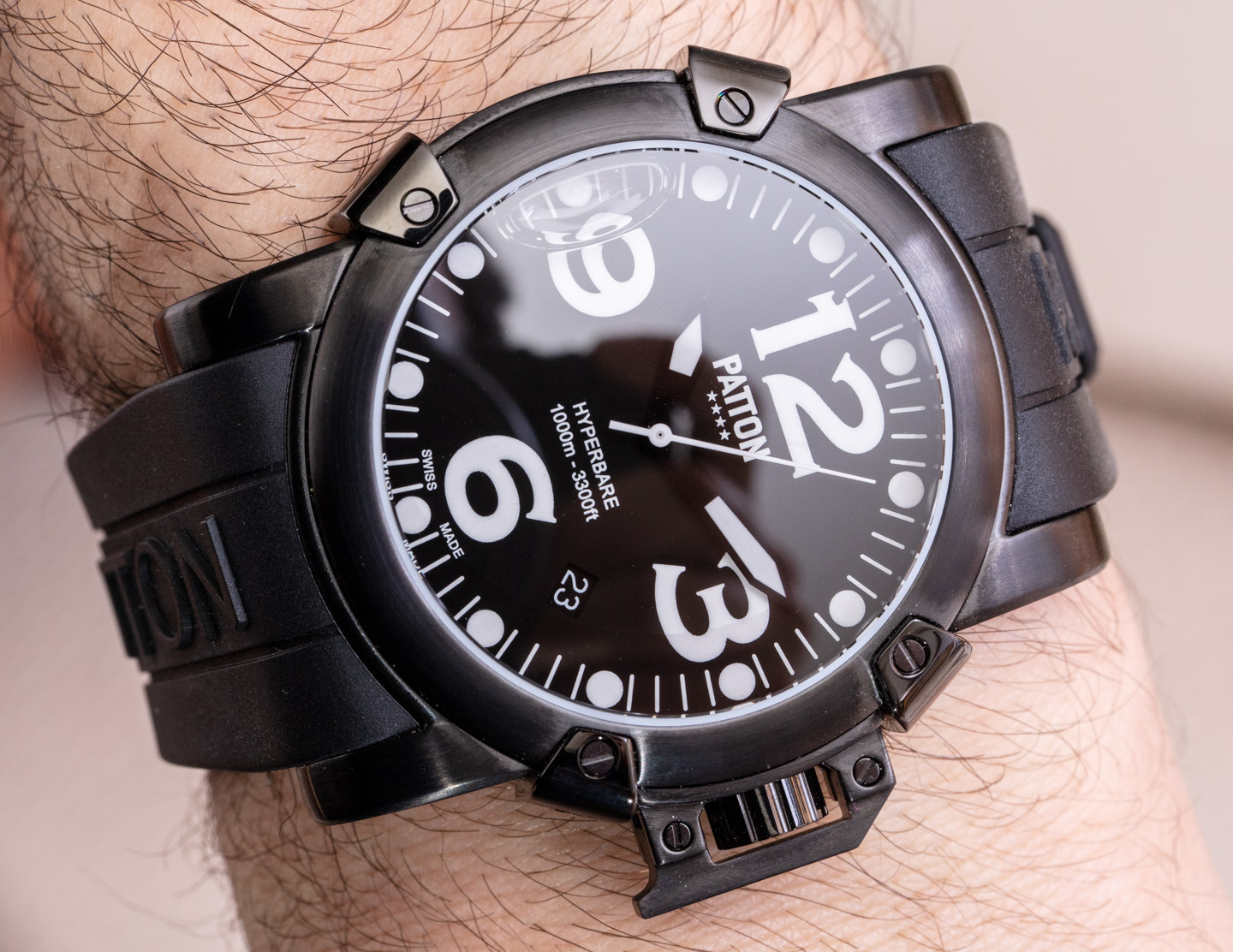 One benefit the Patton Hyperbare may have over the Sinn watch is the ability for users to change their own battery. I could be wrong, but I seem to recall that Sinn recommends that a service professional open and close the caseback on their liquid-filled watches. I didn’t see any such warning for the Hyperbare. So assuming you have a tool that allows you to unscrew the caseback, you can probably change the battery yourself (when needed, that is, which will be no sooner than every seven years).

This particular version of the Patton Hyperbare comes in an all PVD-coated black steel case and is 42mm-wide (about 48mm-wide when considering the crown and adjacent structure). Other versions of the watch come in naturally finished steel, or with a combination of natural and black-coated steel parts. Patton also produces a few dial colors, with this being the chic-looking monochromatic version that Patton calls “Navy.” The dial elements are inspired by companies such as Bell & Ross and Panerai. Patton actually had originally designed different hands for the Hyperbare, but the production hands changed. I’m not sure why that is, but my guess would be that it’s related to the weight of the hands (which have a hard limit given that most quartz movements have limited torque when it comes to how heavy hands can be. For that reason, the hands on the Hyperbare look a bit stubby; because the movement inside can only accommodate so much hand weight. Even though the dials aren’t super original in their design, I find them appealing, and I like the style, as these make for fitting daily wear sport watches with some macho vibes built-in. 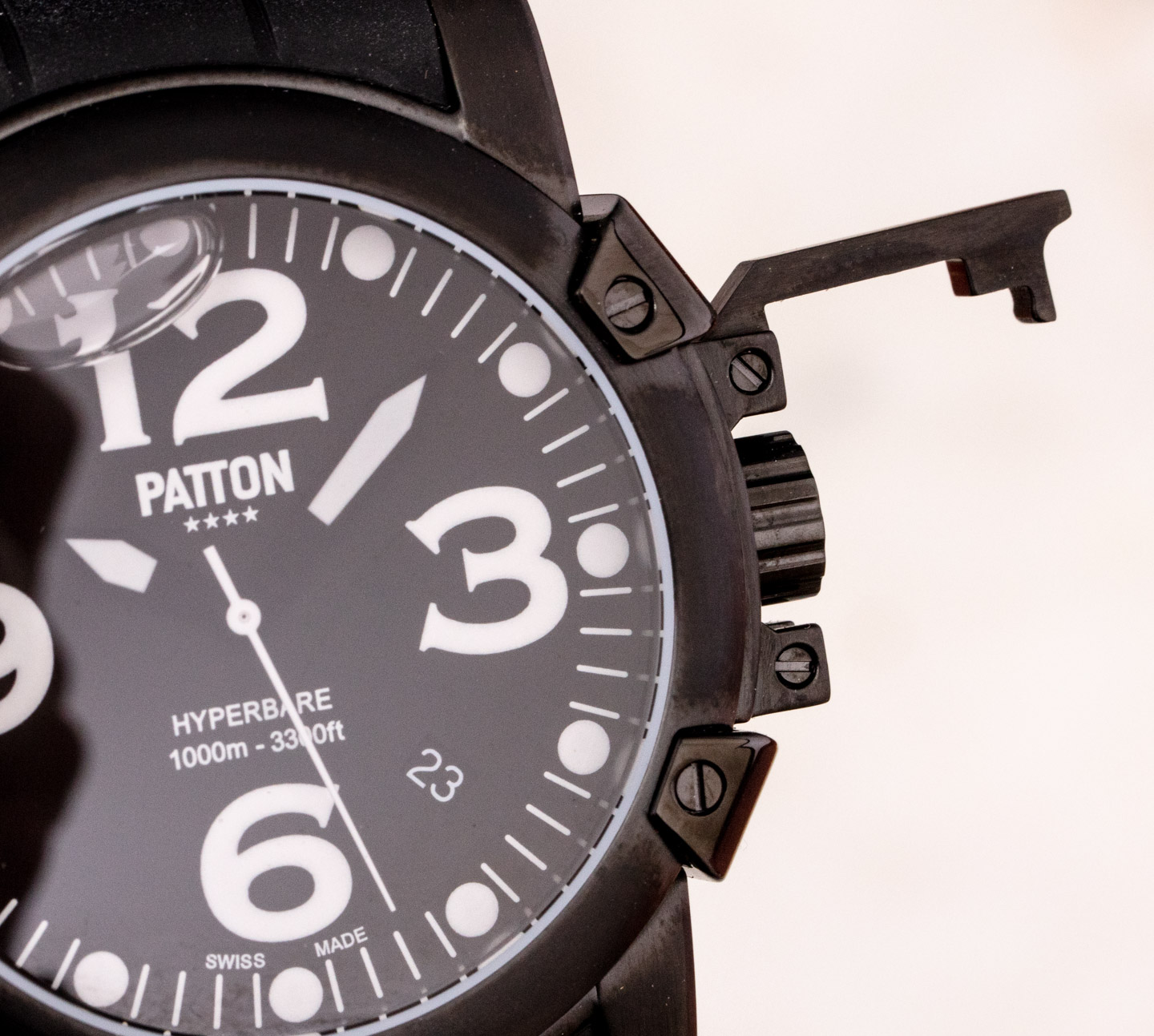 The case design is interesting but might seem a bit cliche by today’s standards. The four bezel “claws” were more original back in 2010 but have since become design elements for many brands, though I still believe these bezel claws look cool and still have a place. Another element that you don’t see on watches very much anymore is an opening and closing crown guard. Helping the Hyperbare look that much more “military,” the folding crown guard is designed to not close unless the crown is screwed in all the way. This is meant to help prevent people from accidentally diving with their watch when it isn’t secure. That’s cool and all, but the latch part of the crown guard is a bit sharp. I’ve not had an issue, but if you run your finger along it, you can see what I mean.

Attached to the case is a fitted rubber strap, which is both comfortable and says “Patton” along its length. The brand’s website actually displays a different style of strap, which has the “Patton” logo smaller and written horizontally near where the strap connects to the lugs. I think this watch would look pretty fitting on a black and white or urban camouflage NATO-style strap. 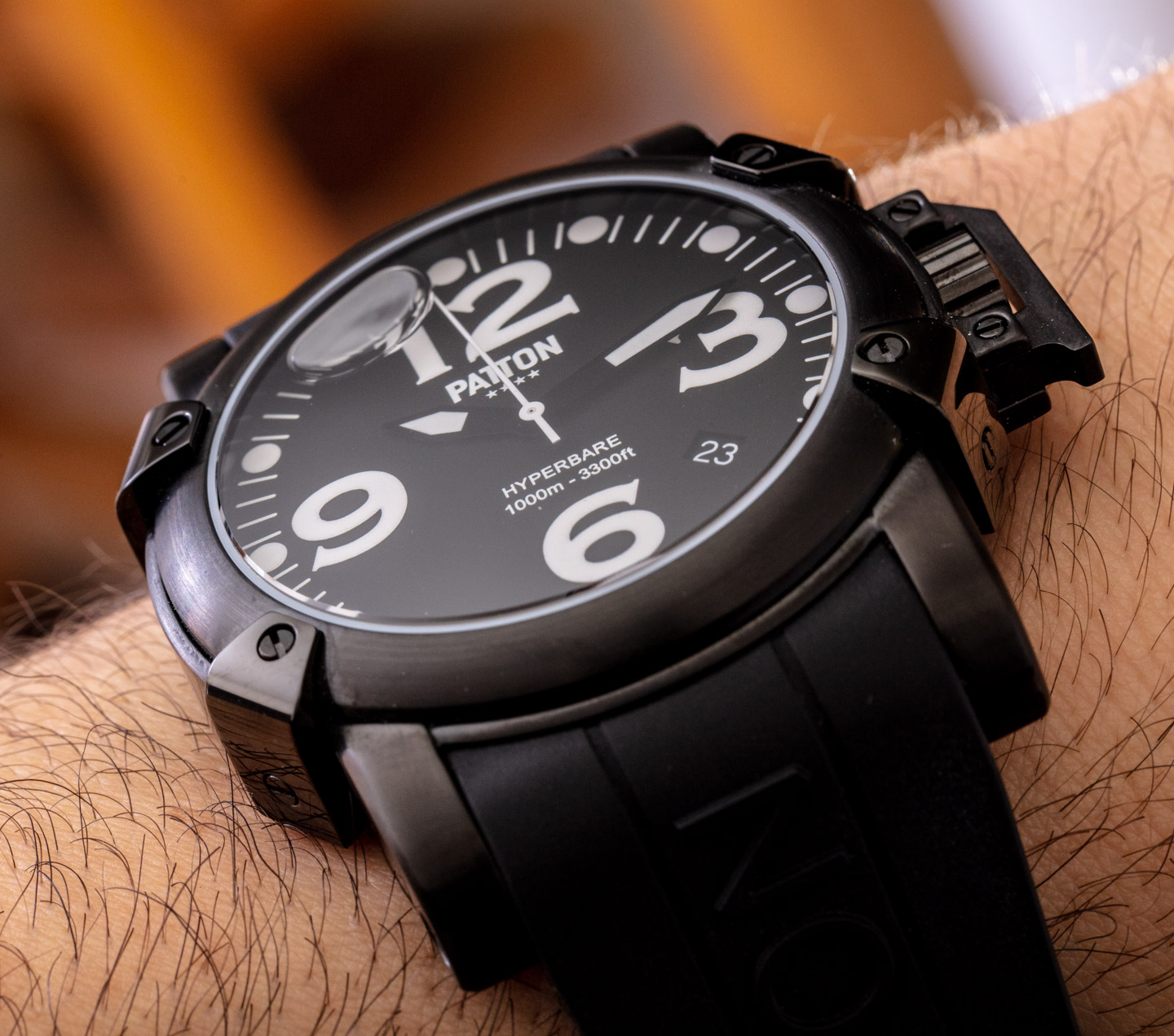 Patton watches were a bit ahead of their time in 2010 when the brand originally came out with the Hyperbare watch, and today, a lot of the watch holds up well as a result. Certain elements of the pieces don’t feel as cutting-edge, but like many timepieces, there is a lot of interest out there for specific looks and feels from the past. I think Patton’s value proposition could be tightened up a bit, and the company might want to include some more strap options in order to keep the pieces feeling as contemporary as possible. That said, after over a decade, there still haven’t been too many new entrants in the liquid-filled watch space, and there is certainly a market for it. I, for one, think the watch is pretty cool, and I’m happy this liquid-filled diver sunk into my lap 11 years after I first came across it. A similar version with an automatic movement and no liquid-filled case is also available. Price for this PVD black Patton Hyperbare watch is $1,530 USD. Learn more at the Patton watches website here.

Necessary Data
>Brand: Patton
>Model: Hyperbare
>Price: $1,530 USD (as tested)
>Size: 42mm-wide, ~14mm-thick, and ~51mm lug-to-lug distance.
>When reviewer would personally wear it: As a fun activity/beater watch that has a lot more personality than the typical timepiece.
>Friend we’d recommend it to first: Liquid-filled dive watch fan seeking something uncommon and also affordable.
>Best characteristic of watch: Aging design holds out well over time. Case is comfortable despite dimensions. Liquid-filled dial is cool.
>Worst characteristic of watch: Hands could be longer and more distinctive. Brand personality or storytelling has yet to be developed. Crown guard clasp is a bit on the sharp side.