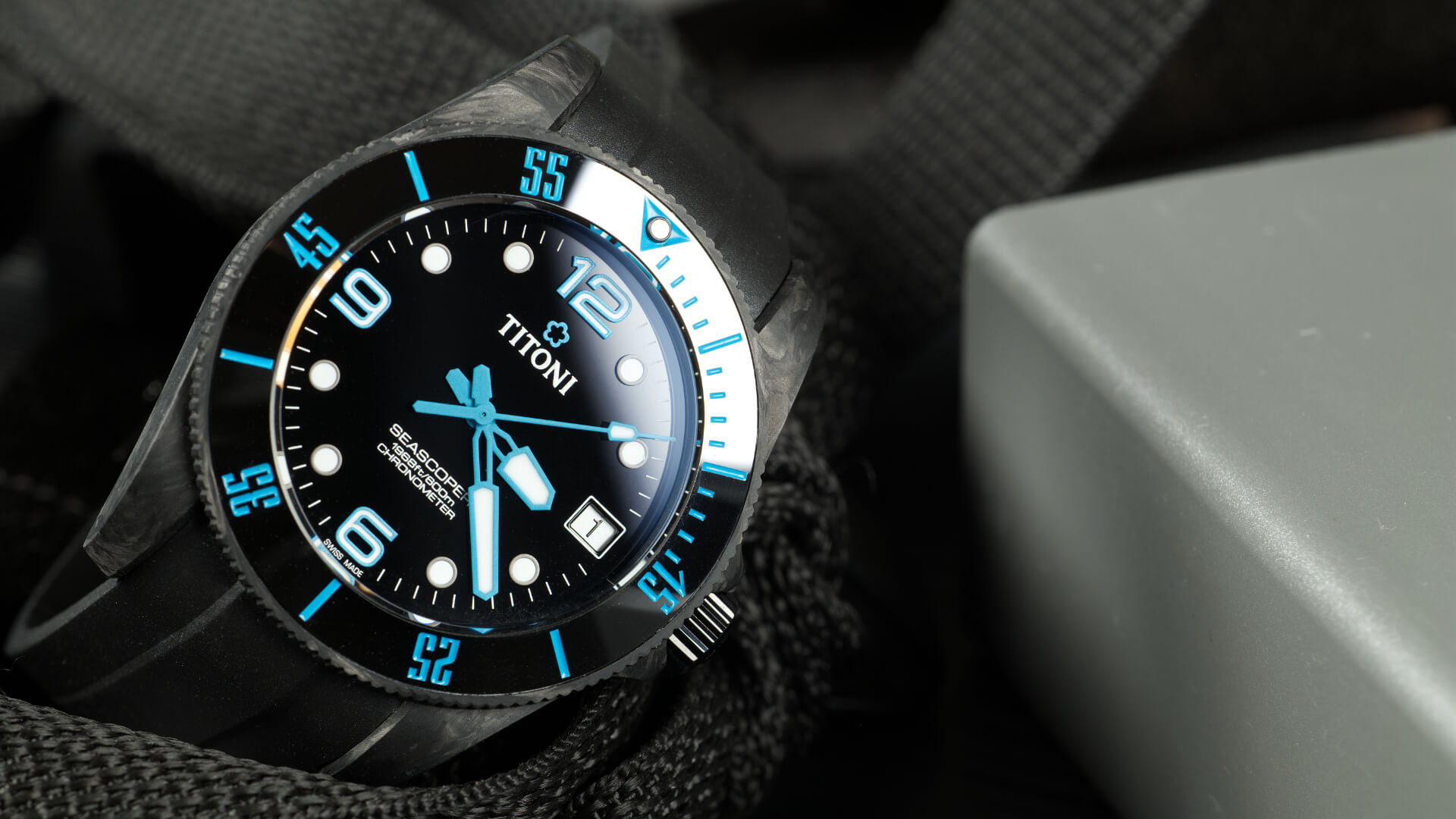 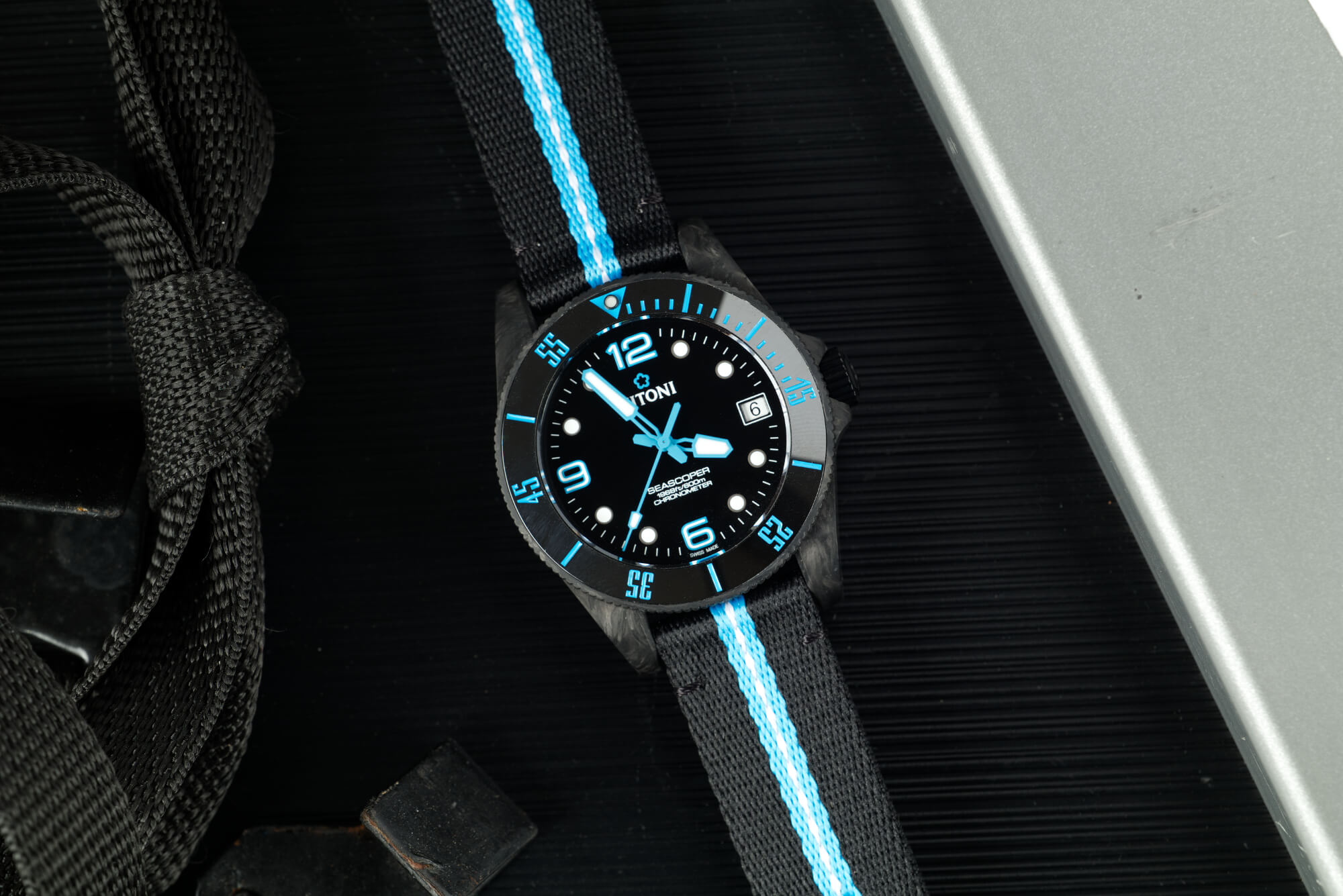 The world does not need more dive watches. We are already spoiled for choice, whether you’re spending $100 on Timex or $40,000 on a Blancpain. And yet, brands keep making them simply because they sell, and sell well. Most people who buy dive watches don’t dive—I’d wager that most people who buy dive watches have never even donned a snorkel. But that doesn’t stop us from making dive watches one of the best-selling styles on the market. There are two reasons behind this, I think. First, dive watches offer obvious robustness and durability that most other watches don’t; even if we don’t live an adventurous lifestyle, we want to have a watch about which we need not worry too much. The second and less rational reason is that we want to live an adventurous lifestyle; dive watches are aspirational, making us feel bolder and more daring each time we strap them on, conveying to ourselves and those around us a life that actually does require such a watch, whether for diving or some other perilous undertaking. At the end of the day, though, most of us end up using the bezel to time the pasta and thanking the Lord for crown guards when we slam into a door jamb.

The challenge for brands, though—that are driven by the market to make more dive watches—is creating something new, different, and exciting. That’s what Swiss brand Titoni is striving to do with its Seascoper 600 CarbonTech. Titoni still doesn’t get a ton of coverage here in the US; it’s a brand with plenty of history and watchmaking bonafides, but it has yet to establish the global presence other brands have. (By the way, the vintage Titoni Airmasters have some of my favorite lugs ever.) We covered the release of the Sesacoper way back in 2014 when the brand took inspiration from some of its models from the 1970s. Since then, the Seascoper collection has evolved a bit, with the new CarbonTech being the latest offering. Presented in a solid carbon case with 600m water resistance and a manufacture chronometer movement, this watch means business. 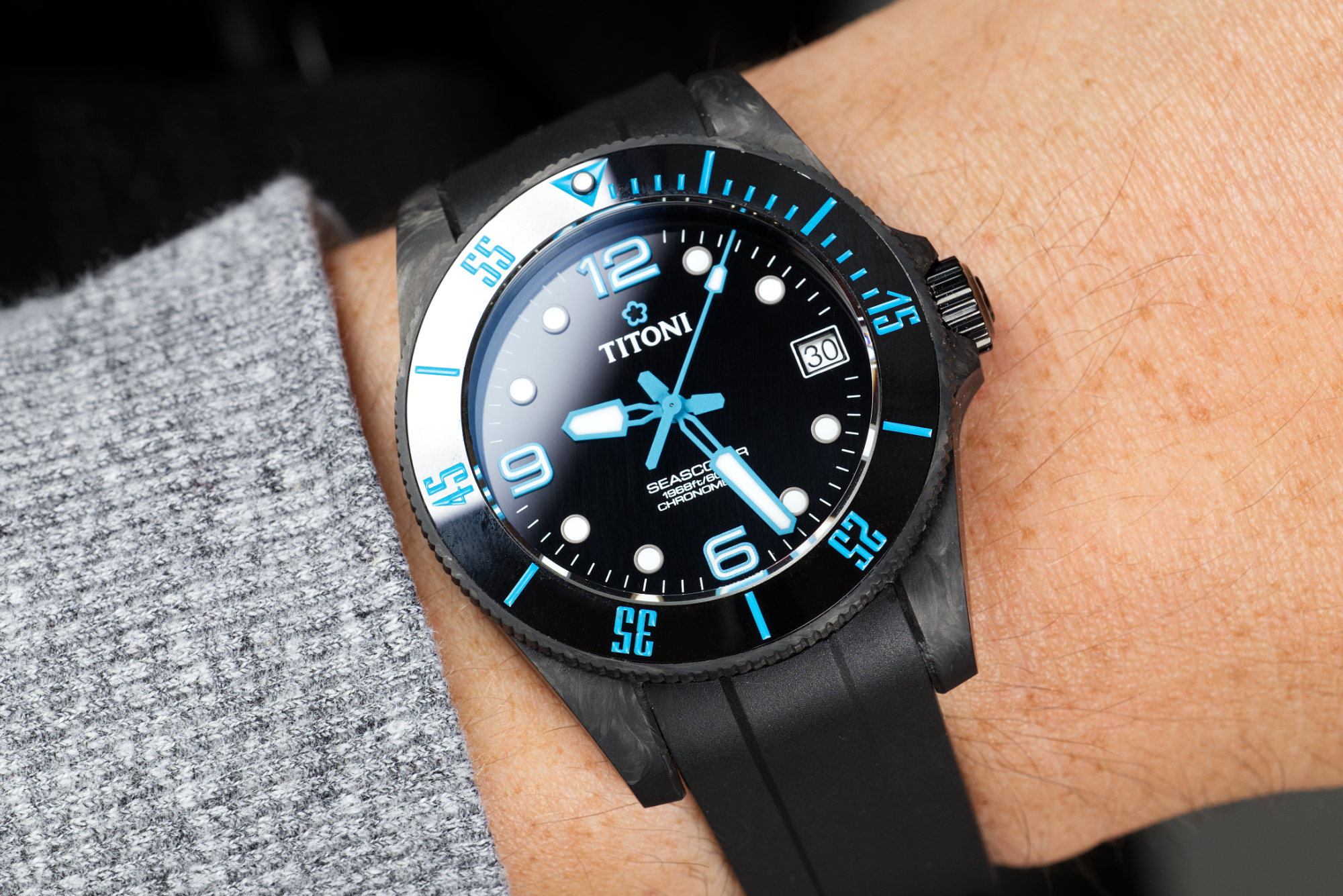 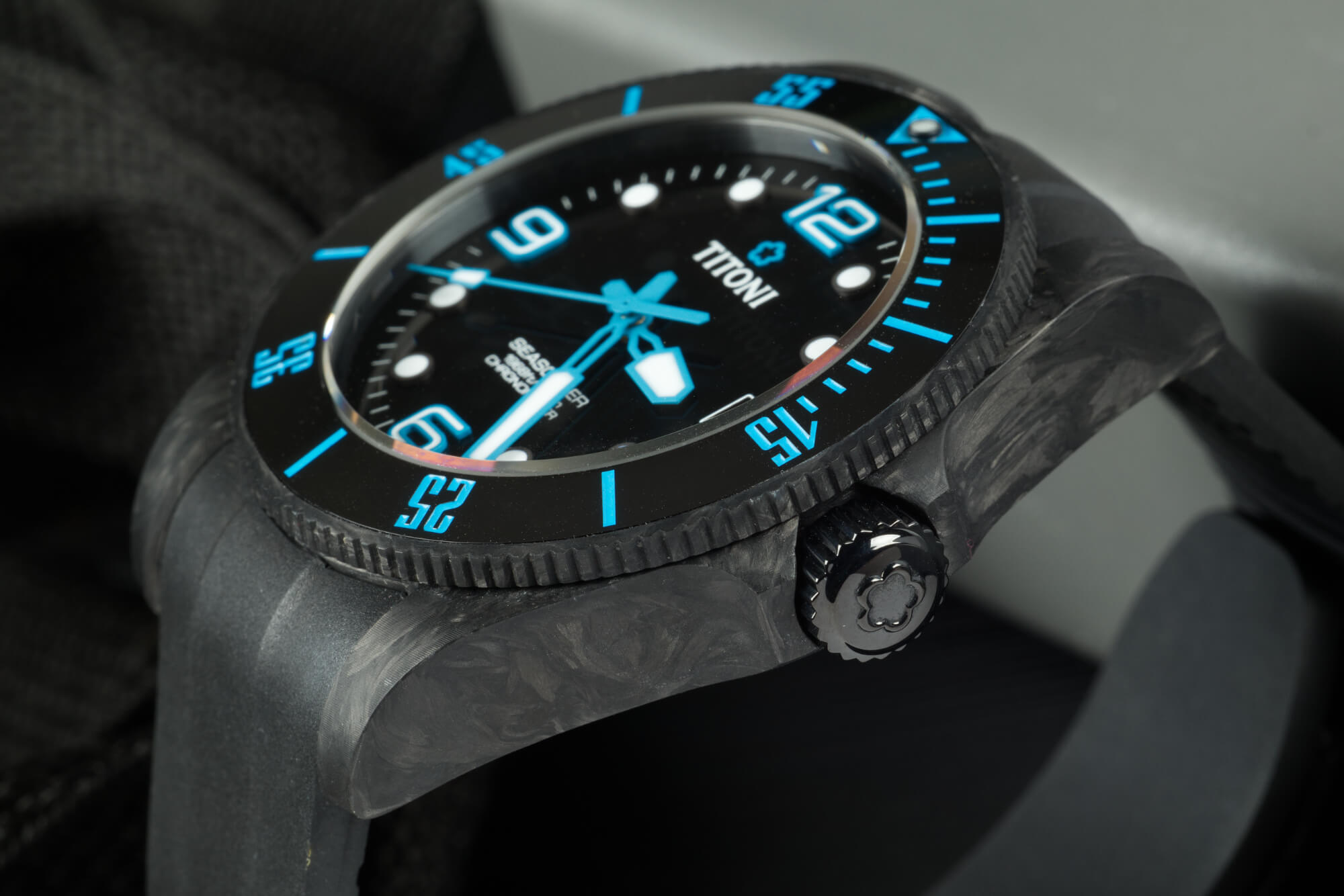 The 42mm case of the Titoni Seascoper 600 CarbonTech is made from solid carbon, save for the crown bezel insert, and caseback. This is not the first dive watch made from carbon, with brands from TAG Heuer and Doxa introducing carbon versions of their divers in recent years. That said, it is a more traditional case design than either of those brands—many watch designs with unique materials have unique case designs, for better or worse. The Seascoper has a straightforward design, though, with familiar crown guards and a simple profile that sees the lugs offer a slight curve around the wrist. That curve isn’t quite sufficient to mitigate the 50.5mm lug-to-lug or the 14.45mm thickness, though: The watch stands tall and proud on the included straps, which I’ll discuss in a bit. The case has an impressive 600m of water resistance and a helium escape valve; both speak to the aspirational nature of modern dive watches, as almost no one needs 600m of water resistance, much less a helium escape valve. The screw-down crown no doubt plays a part in ensuring the water resistance, and I will say that it was easy to grip and had some of the smoothest winding I’ve experienced. While the bezel itself is carbon, the insert is the now-de rigueur ceramic, with colored infill. It’s a nice splash of color, but pales in comparison to the rainbow bezel option, which features the full spectrum as you progress around the bezel (there’s a third model with white numbering, as well). The bezel action was certainly adequate, though it proved difficult but not impossible to grip and turn when wet. I would have loved to see an option with a solid carbon bezel, which I think would have furthered the effect of the carbon and let the dial stand out even more. 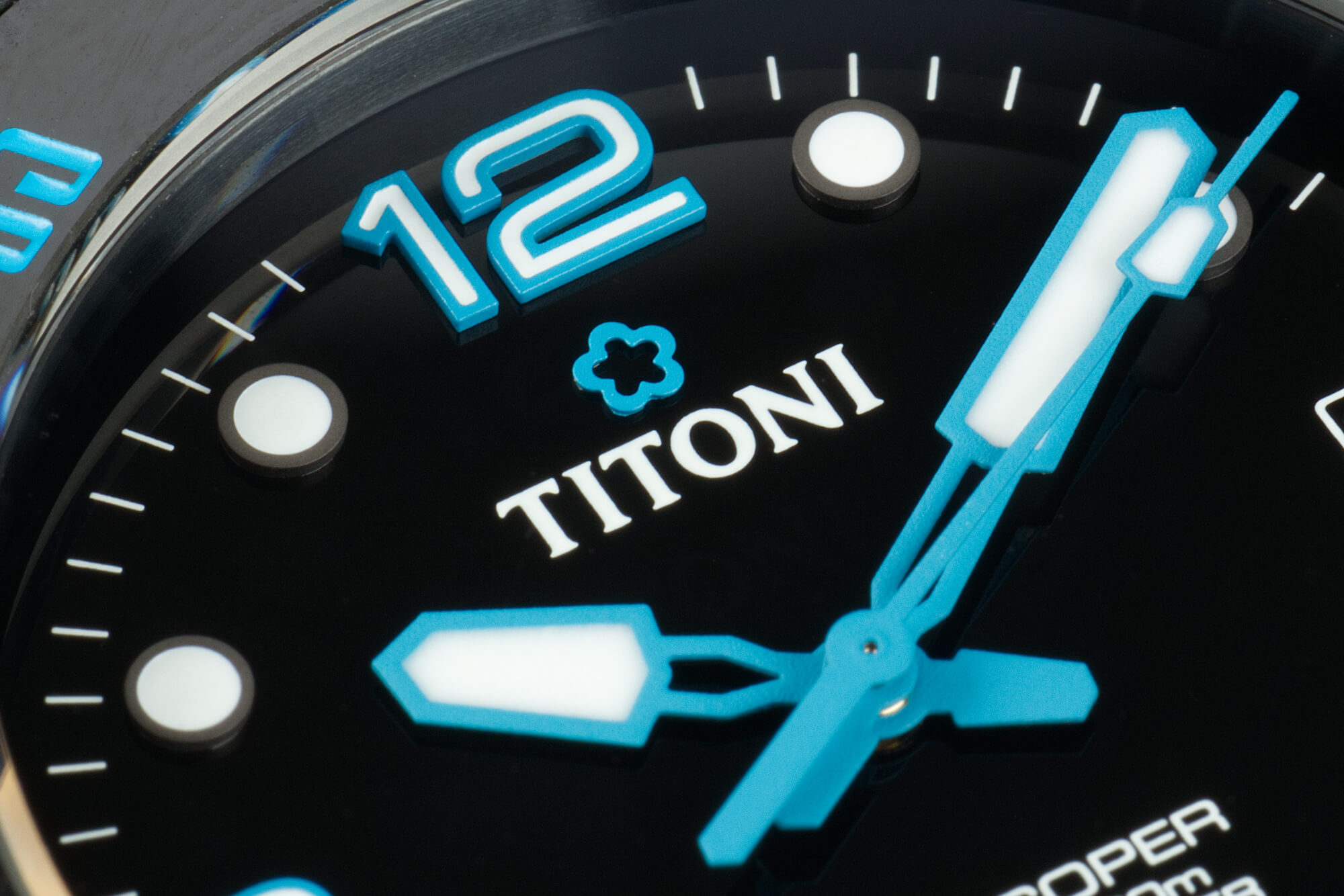 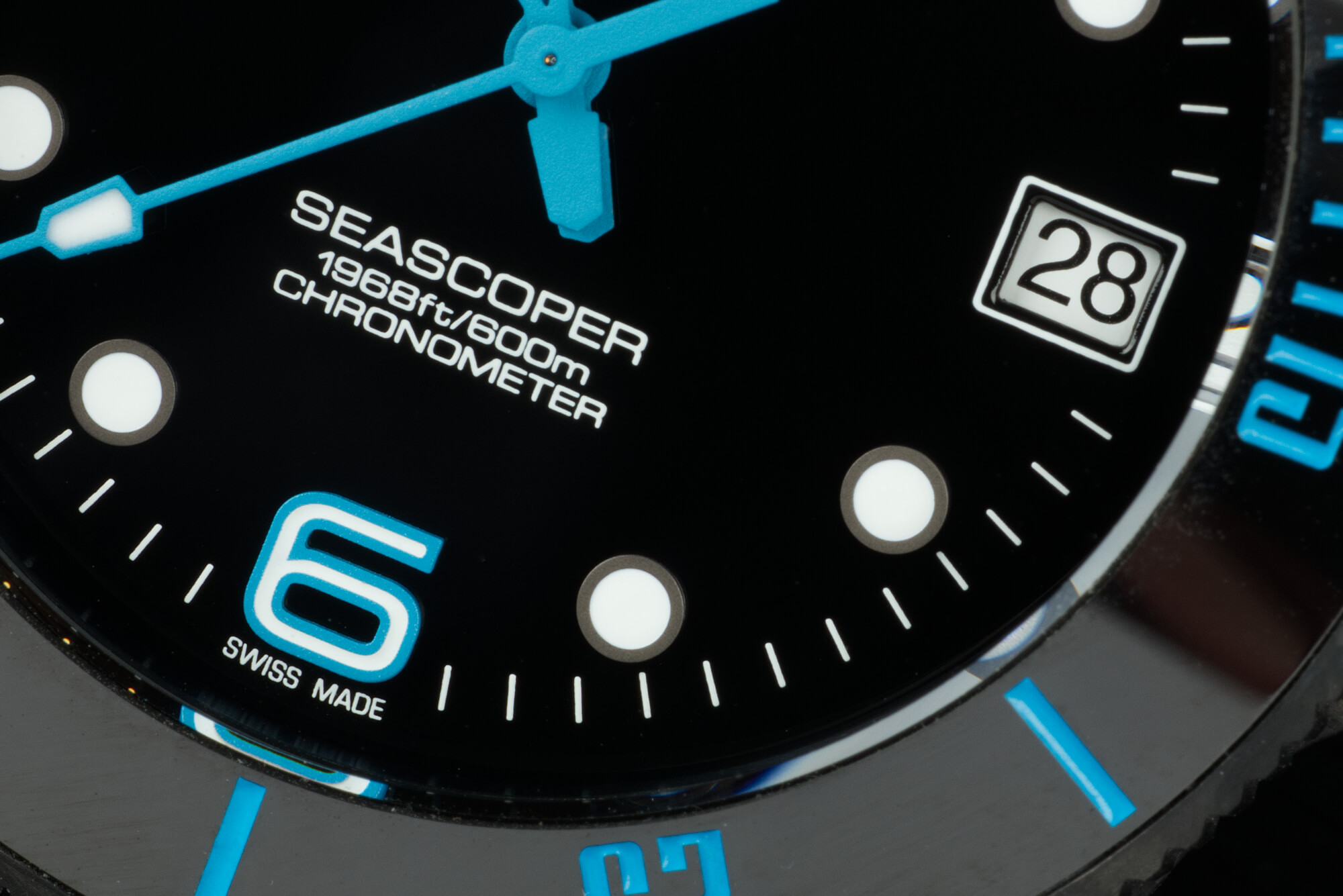 I found myself quite taken by the dial. The inky blackness with the pops of blue made for high legibility and an attractive look. The applied cardinal numerals add extra character, and it should be noted that this is the only model of the three CarbonTechs to have color on the dial, the others having polished surrounds for the makers and numerals. What stood out most for me was the unique handset. They look like tongs picking up an obelisk, and I think they’re fun and quirky while still being legible. Most handsets look familiar, but this one does something a bit new. The date window is kept simple, with a plain white frame around a soft-edge cutout; the white date wheel doesn’t stand out too much on account of the white on the rest of the dial. The lume here (presumably Super-LumiNova, but not specified) is quite good, with even application and a bright bezel pip, so you shouldn’t have any issues in low light. With a black dial, you might expect a lot of reflections, but in my time with the watch, I was surprised at how well the flat sapphire crystal seemed to do in keeping the dial clear of such distractions. 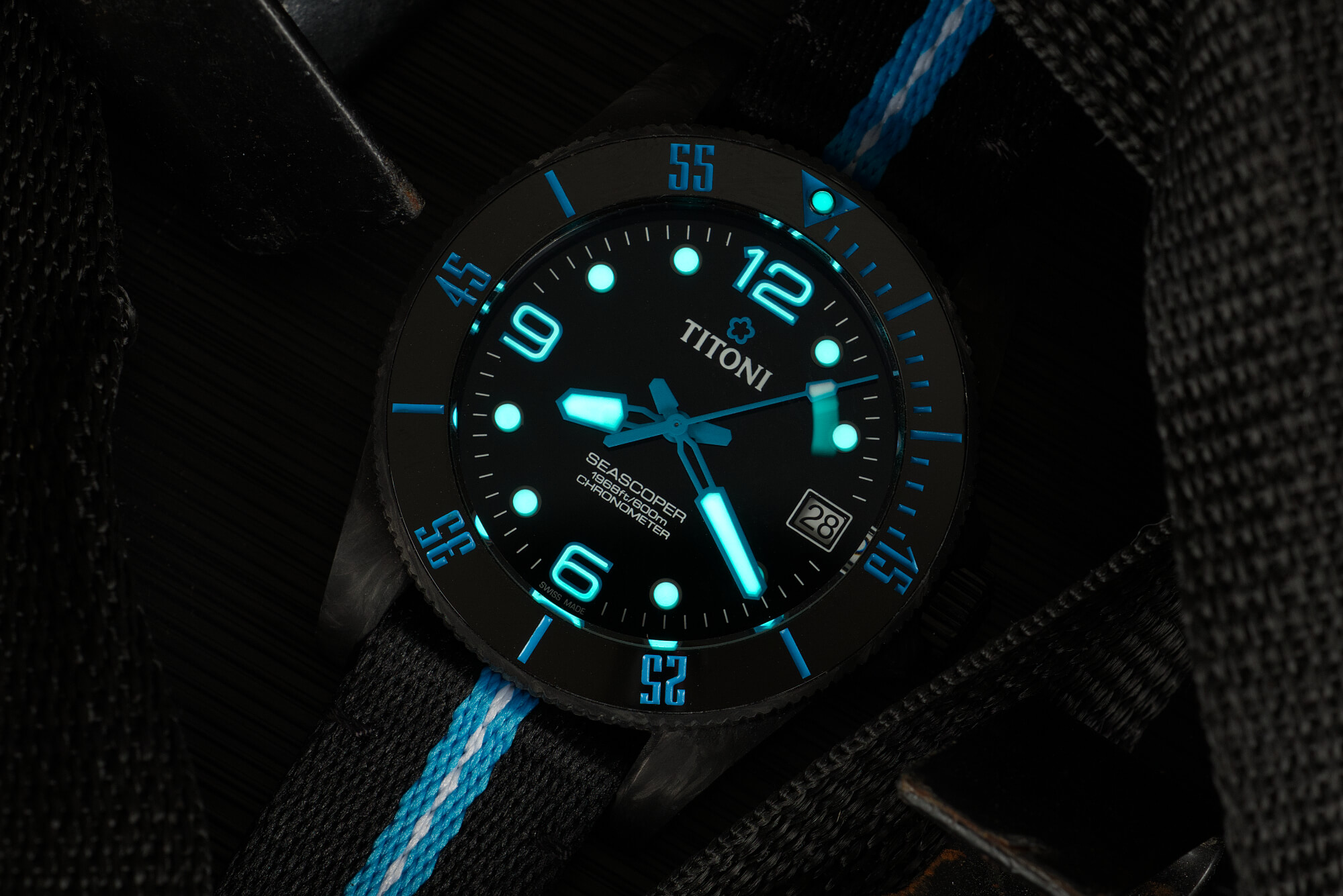 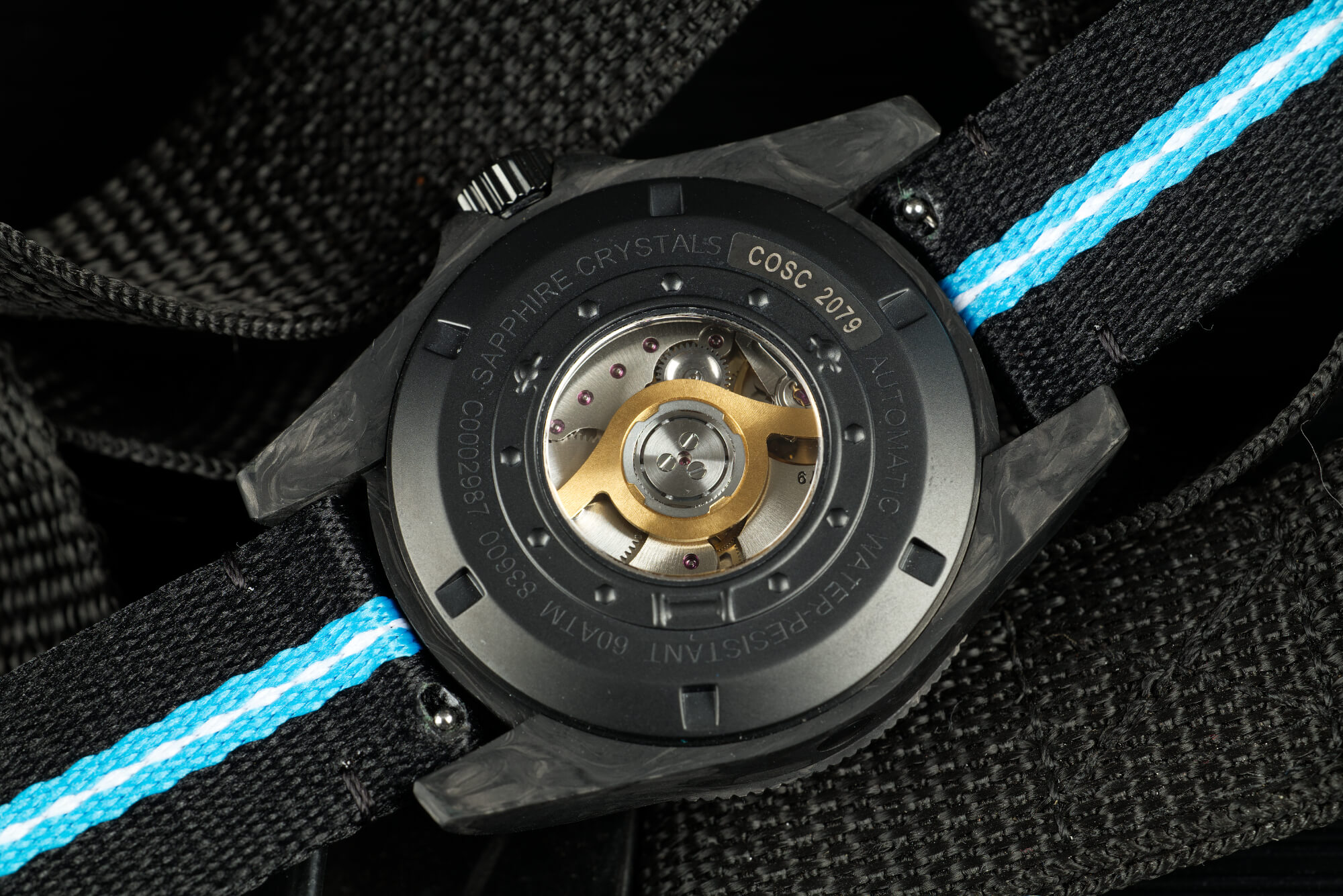 The hidden gem of the Titoni Seascoper 600 CarbonTech is the chronometer-certified, manufacture Titoni T10 caliber. The movement was developed entirely by Titoni and was first introduced in its Line 1919 collection for its 100th anniversary in 2019. The next year, it was introduced into the Seascoper collection with COSC certification. With components made in and around Titoni’s home base of Grenchen, then assembled and regulated by the brand, this caliber more than meets muster to be called a manufacture movement (and I applaud Titoni for not trying to pass it off as truly in-house, even though it is more in-house than many that claim to be). It’s not just an ETA clone, either — with a 15% larger footprint, 72-hour power reserve, and 31 jewels, the T10 outdoes most competitors. Beating at 28,800, it features a graceful sweep, and the smoothness with which it winds and with which the date and time are set is exceptional. In my dealing with the watch, I found no issues with the movement. It appeared to keep time to spec and, true to the brand’s claim, there were times I came back to it after more than two days and it was still going. While the caseback porthole design is cute, I do wish the brand had done more to put it on display. I’m not a huge display back fan for most movements, and perhaps the water resistance limited the size of the caseback aperture, but I would think that a brand would want to show off its work as grandly as possible. 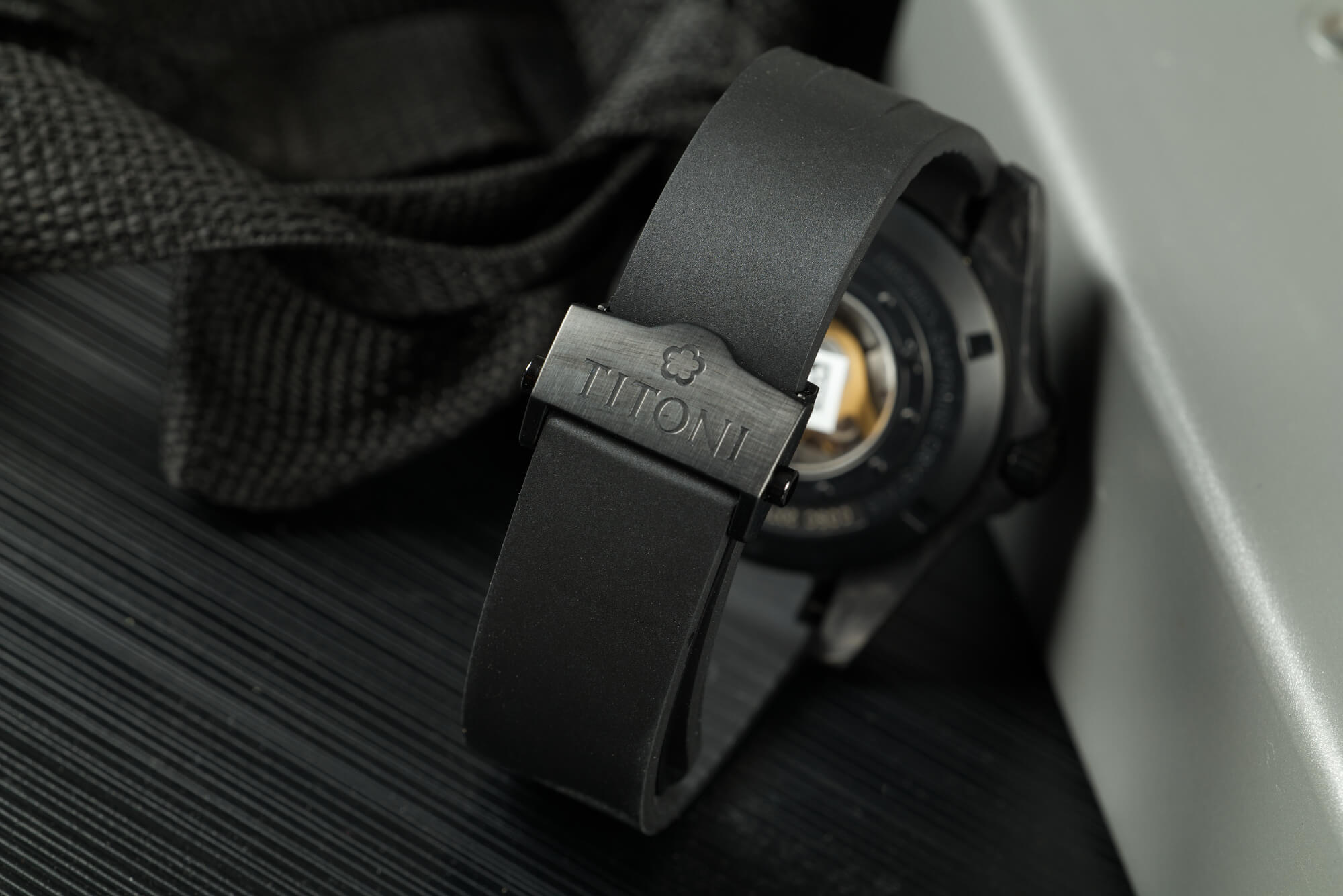 I’ll make mention of the straps because more than I’ve ever experienced, they make a huge difference in how the watch wears. The Seascoper comes with your choice of fitted rubber or a quick-release two-piece textile from #tide, made from ocean plastic. If you’ve ever worn a #tide strap (they’re available from many brands), you know they take a bit to break in, but are eventually rather comfortable. The rubber here is even more comfortable, though, and features a very secure deployant clasp. The issue, however, is that because of its form—the ends are fitted, but it immediately thins out and drops down almost perpendicular to the case—it makes the watch stand out on the wrist more than is necessary. The #tide strap has a similar effect due to its thinness, but at least lacks the awkward drop. I found that putting it on a thicker strap made a huge difference. When I attached a thick rubber strap, the watch looked much better on my wrist, as there was a natural flow of the case’s outline that continued out and around my wrist, as opposed to the abrupt end that the included rubber created. 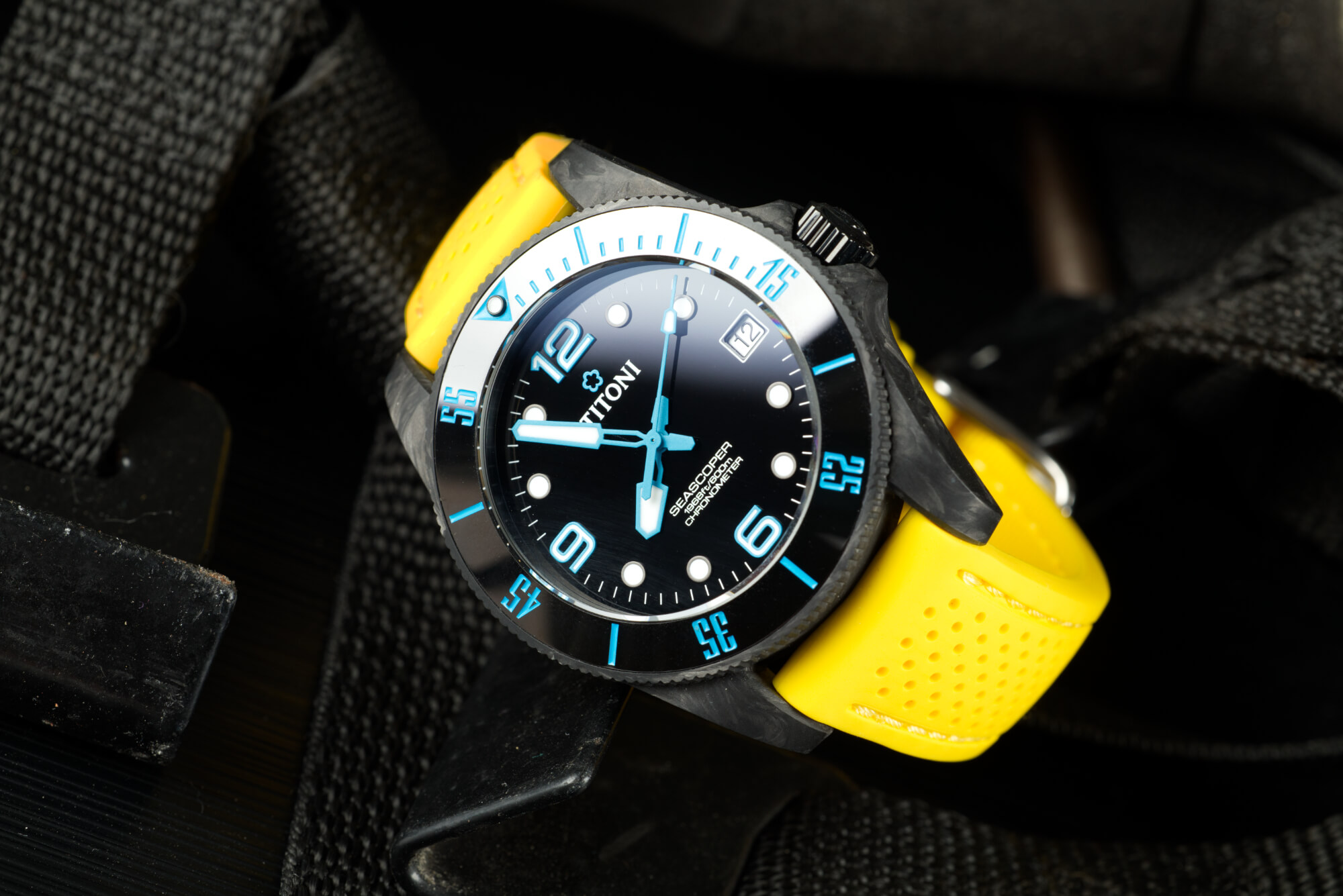 It’s a bit of a wonder why Titoni—and perhaps, specifically, the Seascoper—has not garnered more attention. The brand has 100 years of legitimate heritage, a manufacture movement, and a wide offering of appealing designs. The Seascoper 600 CarbonTech only takes the desirables further with everyone’s favorite don’t-need-but-gotta-haves: a helium escape valve, over-the-top water resistance, and chronometer certification. Add a solid carbon case and an option for a rainbow bezel and you’ve got a watch that should be an obvious hit.  Yet something is standing in the way, and I can’t put my finger on it. Despite being a clear standout, perhaps it just gets lost in the sea of dive watches available to today’s buyers. The Titoni Seascoper 600 CarbonTech is available starting at $3,150. For more information, please visit the brand’s website.

Necessary Information:
>Brand: Titoni
>Model: Seascoper 600 CarbonTech 83600 CBL-T3-256
>Price: $3,150-$3,250
>Size: 42mm-wide, 14.45mm-thick, 50.5mm lug-to-lug distance
>When reviewer would personally wear it: Almost any time I’m wearing a t-shirt, going outside, or just want to feel cool
>Friend we’d recommend it to first: Someone looking for an all-black dive watch with a manufacture movement who doesn’t want to worry about a coating rubbing off over time
>Best characteristic of watch: Lightweight carbon case and its contrast against the dial, bezel, and crown; manufacture movement with incredibly smooth winding and date adjustment
>Worst characteristic of watch: Bezel action is mediocre, with difficult use when wet; rubber strap makes the watch wear taller than it should.