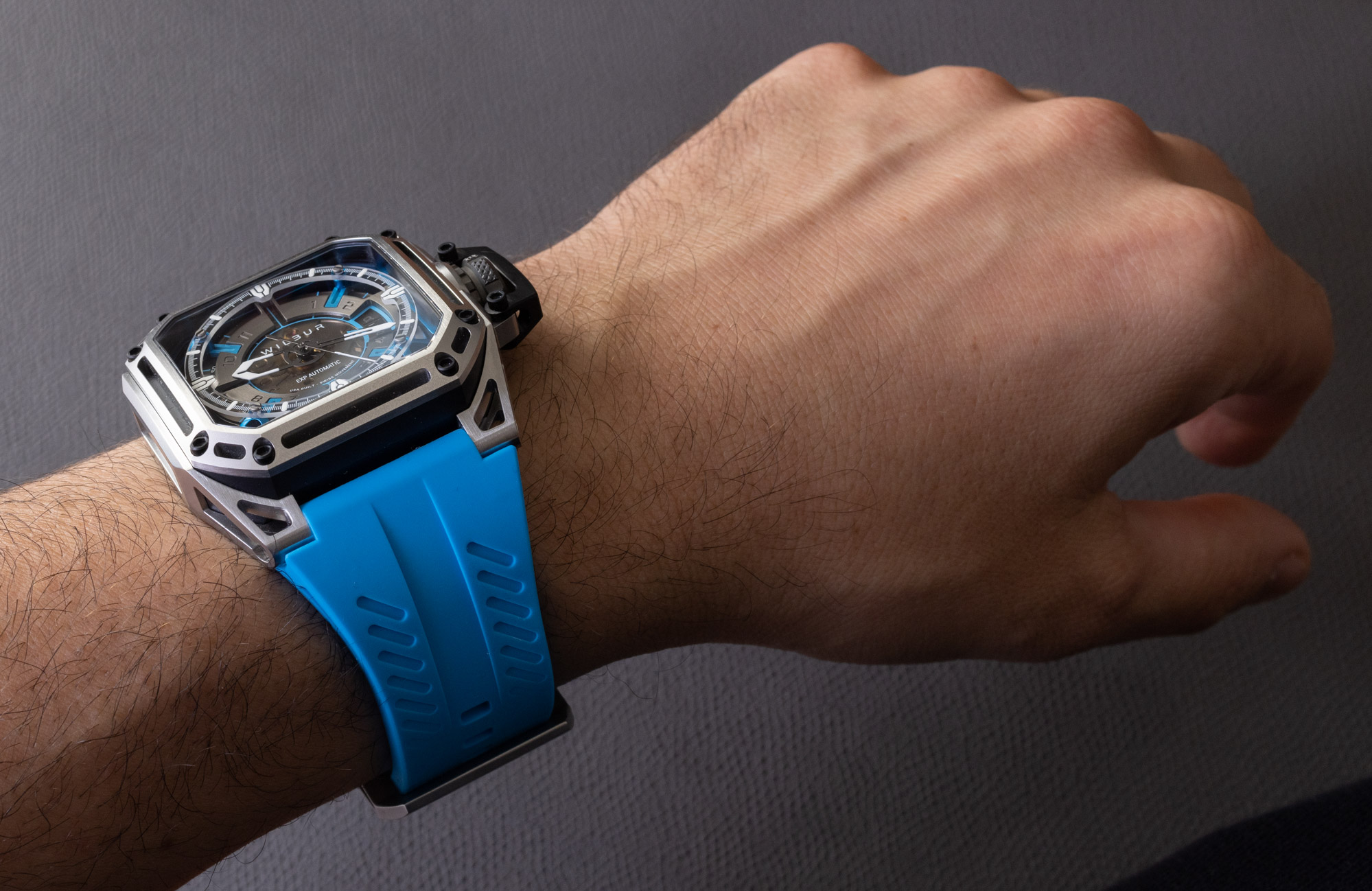 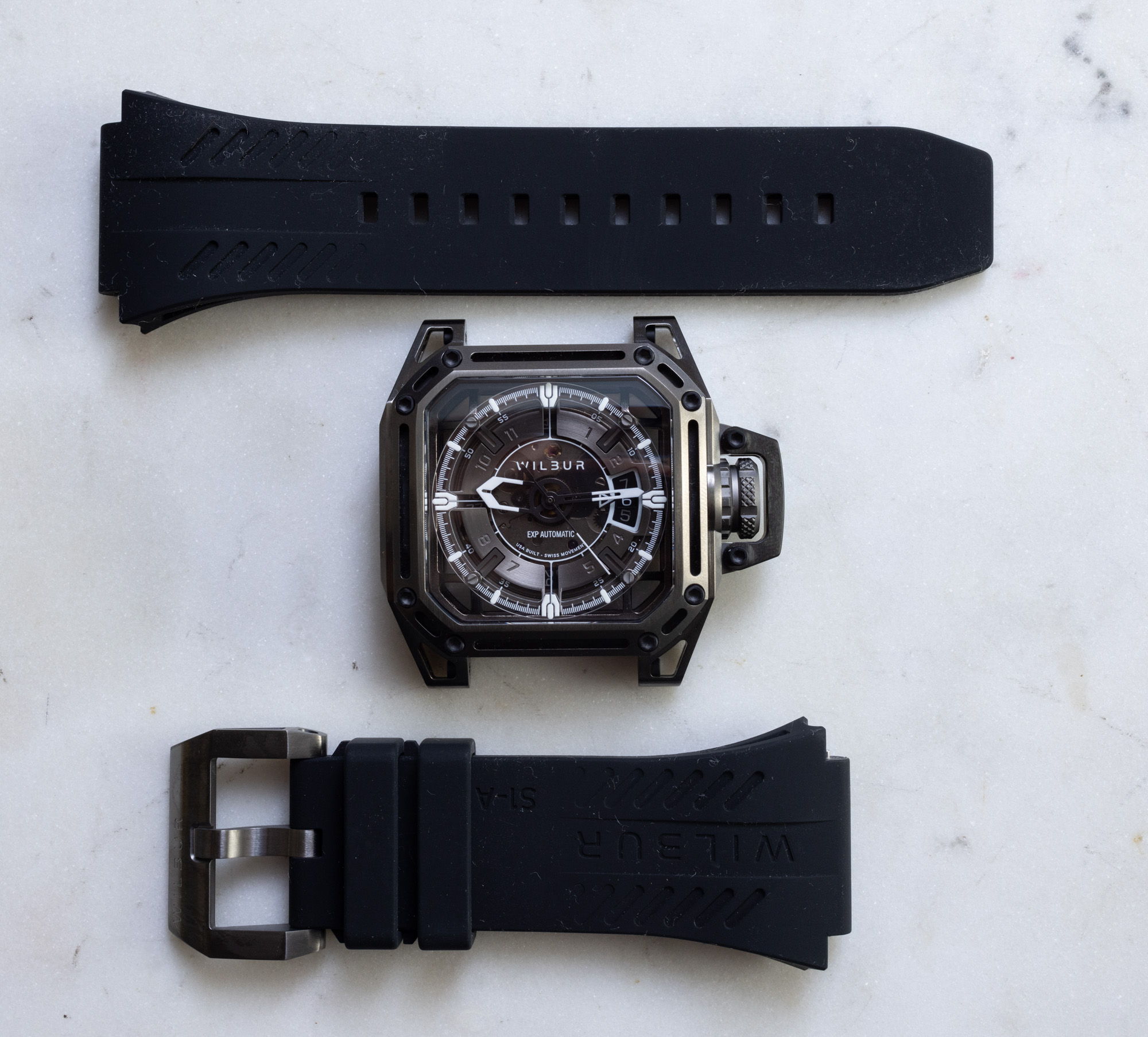 One of the latest new products from Jason Wilbur’s eponymous “Wilbur” watch brand is the EXP — and it is probably his best-done daily-wear timepiece yet. When it comes to this particular design concept, it appears that the third time is a charm. Jason Wilbur has been working on this concept for over a decade now. Back in 2013, I reviewed a watch he designed for 2XIST, which was the first glimpse of this concept in the form of a relatively affordable fashion watch known as the “New York City.” Jason later went on to launch his own brand known as Wilbur, and the first product to launch was the 2020 Automatic Launch Edition JWA that I reviewed on aBlogtoWatch here. Now, in 2022, Wilbur features yet another variation on the same theme as the JWA, but improved. The price has gone up, but so has the quality, components, and sheer wearability of this futuristic tool-style watch. According to Jason Wilbur himself, the EXP is not just a scaled-down version of the previous model but re-engineered in all ways and improved from a components and manufacturing perspective.

The two launch-edition versions of the Wilbur EXP are the Battleship Gray Steel and the Ceramic Steel Blue (the names could use some work, that’s true). Both are limited editions, but the Ceramic Steel Blue is more expensive given some of the materials used and because it will be produced in much lower numbers. It is very plausible that future color variations on the Wilbur EXP will present additional material options, with future versions of the watch already planned at Wilbur. 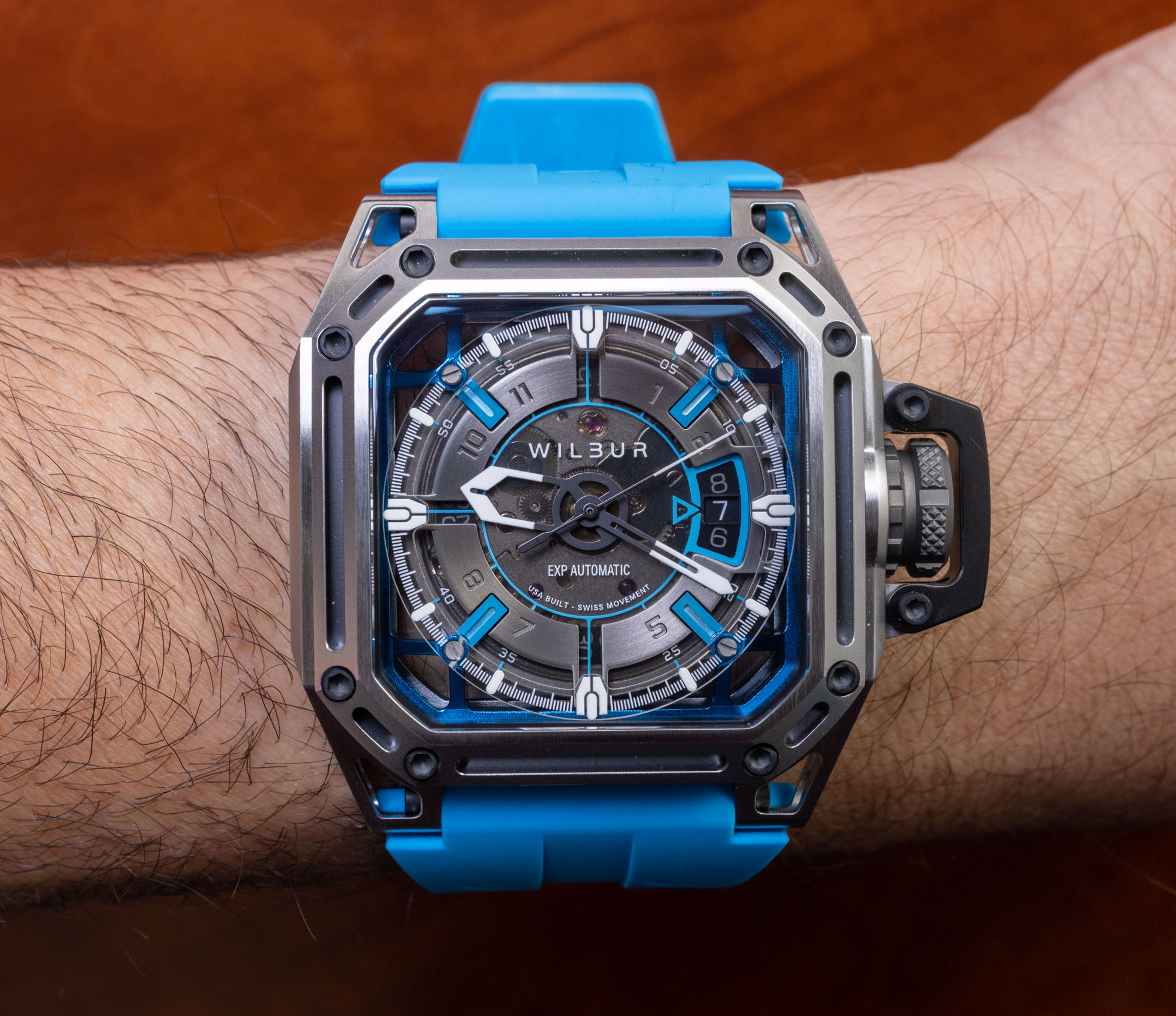 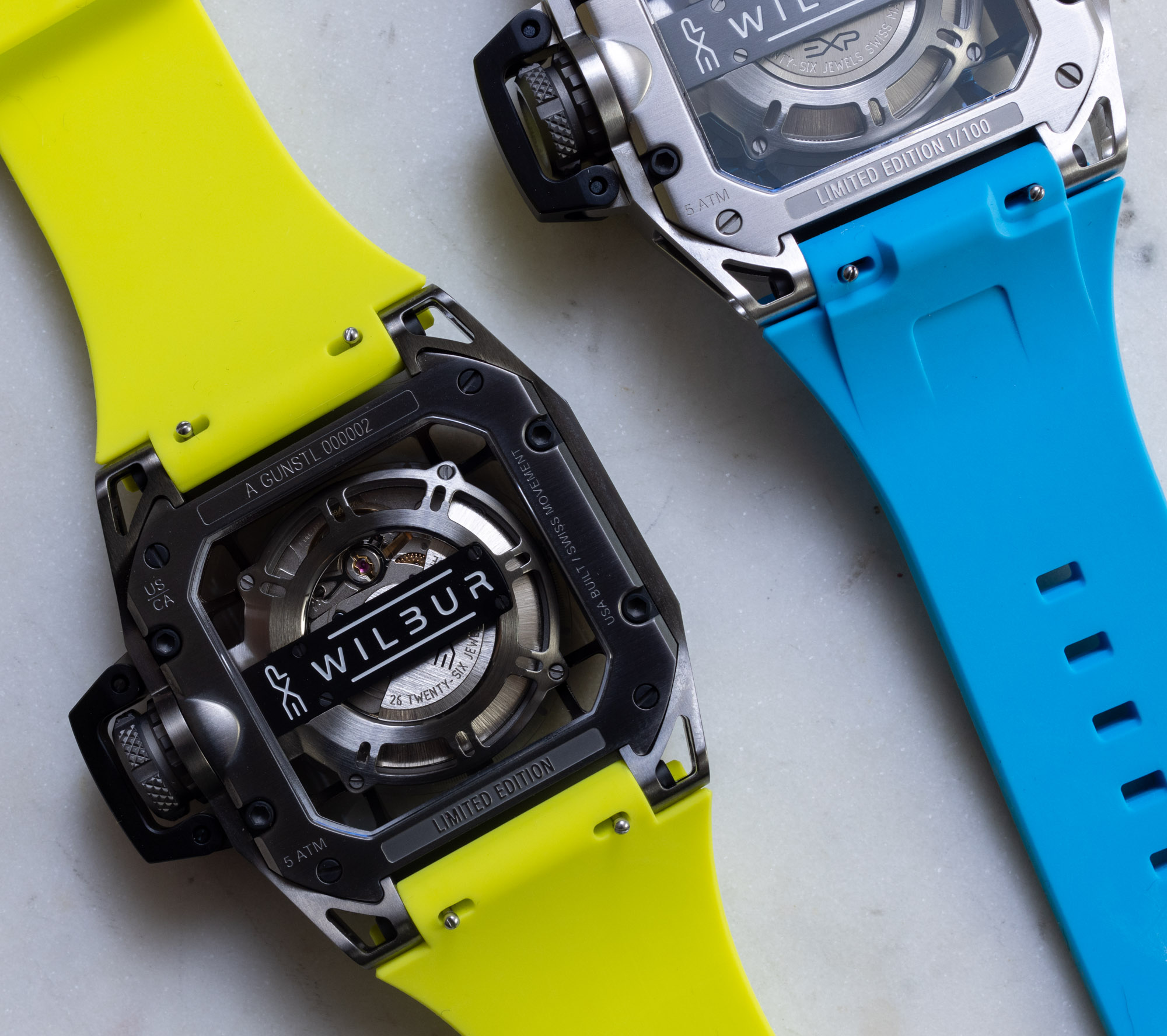 At a glance, the Wilbur JWA and EXP watches are very similar. It is true that they share the same overall case profile (though different sizes), and the dials are similar. The primary difference between the JWA and the EXP is that the latter is a smaller and more wearable watch (a 41.5mm-wide square versus a 44mm-wide square) and that the EXP contains a base Swiss Made, versus Japanese, automatic movement. Jason himself likes larger watches but concedes that his tastes don’t reflect those of large parts of the market. The 44mm-wide version of this case design was just too large for many wrists and, at 41.5mm-wide square and 14.7mm-thick, the EXP is still not exactly small. Note that 41.5mm is just the size of the bezel and that the EXP wears more like a 45mm wide case (plus the crown). For me, the size works perfectly and offers the sensation of a really large watch without extending past the edges of my wrist. I also want to add that the EXP’s case construction is better and also has more refined edges that are less sharp-feeling to the fingers. Despite the edgy look of the case, this is a pleasant watch to touch and run your fingers over.

The concept of the watch, in general, is to offer an exoskeleton-like case with the sensation of the movement being suspended within it. This looks better than ever with some supports holding the circular movement container with the overall case feeling more like an architected support structure, versus a traditional timepiece case, given all the skeletonization and “see-through” features. The case materials are slightly different between these two models, even though they appear to be very similar. The Battleship Gray Steel case uses dark gray-coated steel for most of the case, with matte-black finished steel for the case middle. The Ceramic Steel Blue, however, uses naturally polished steel for most of the case and a black ceramic middle section (which looks the same as the black steel component on the other version). There are also apparently some other special supports in the Ceramic Steel Blue model that hold the case together. Both versions of the EXP case are water resistant to 50 meters and have sapphire crystals over the dial and caseback. 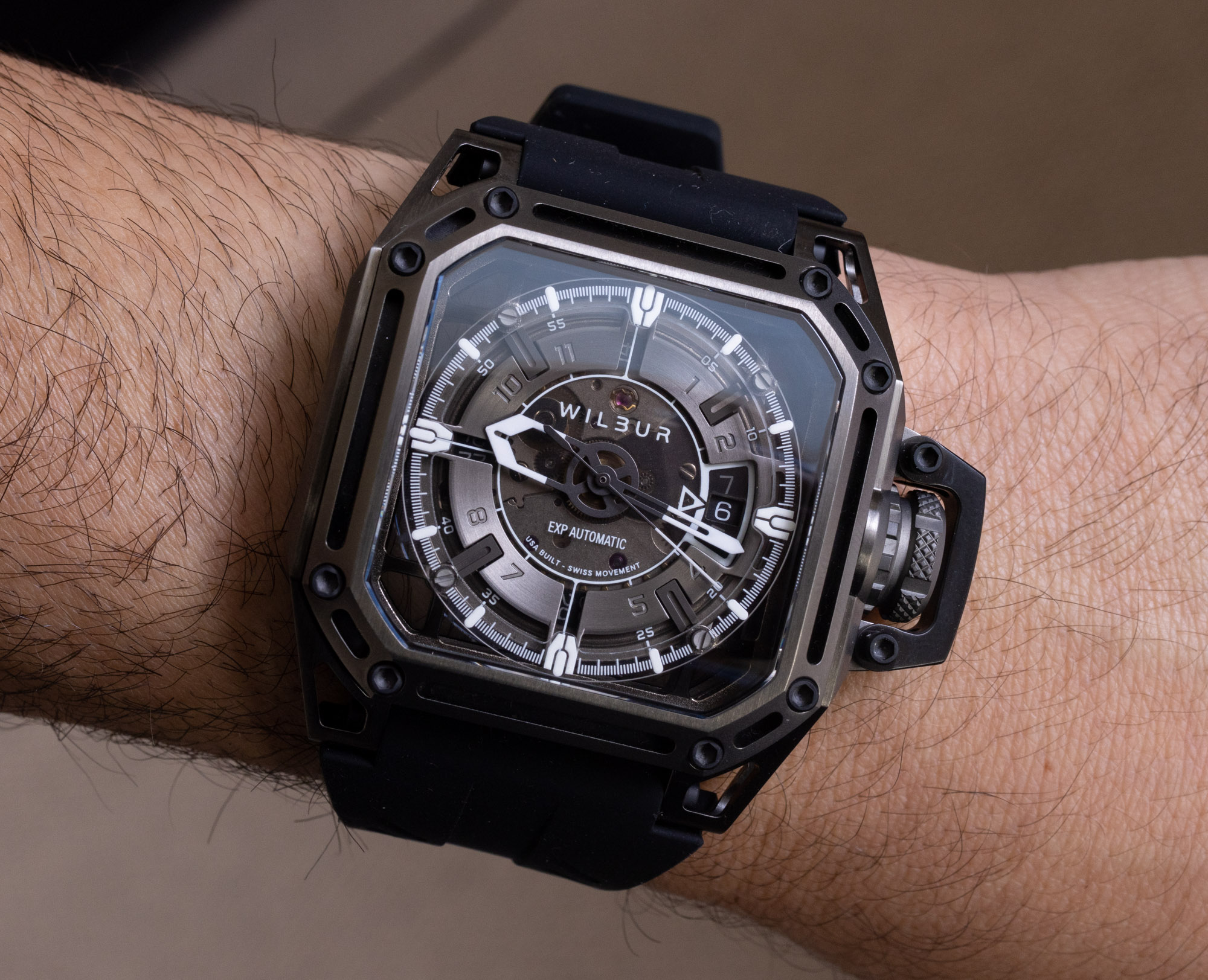 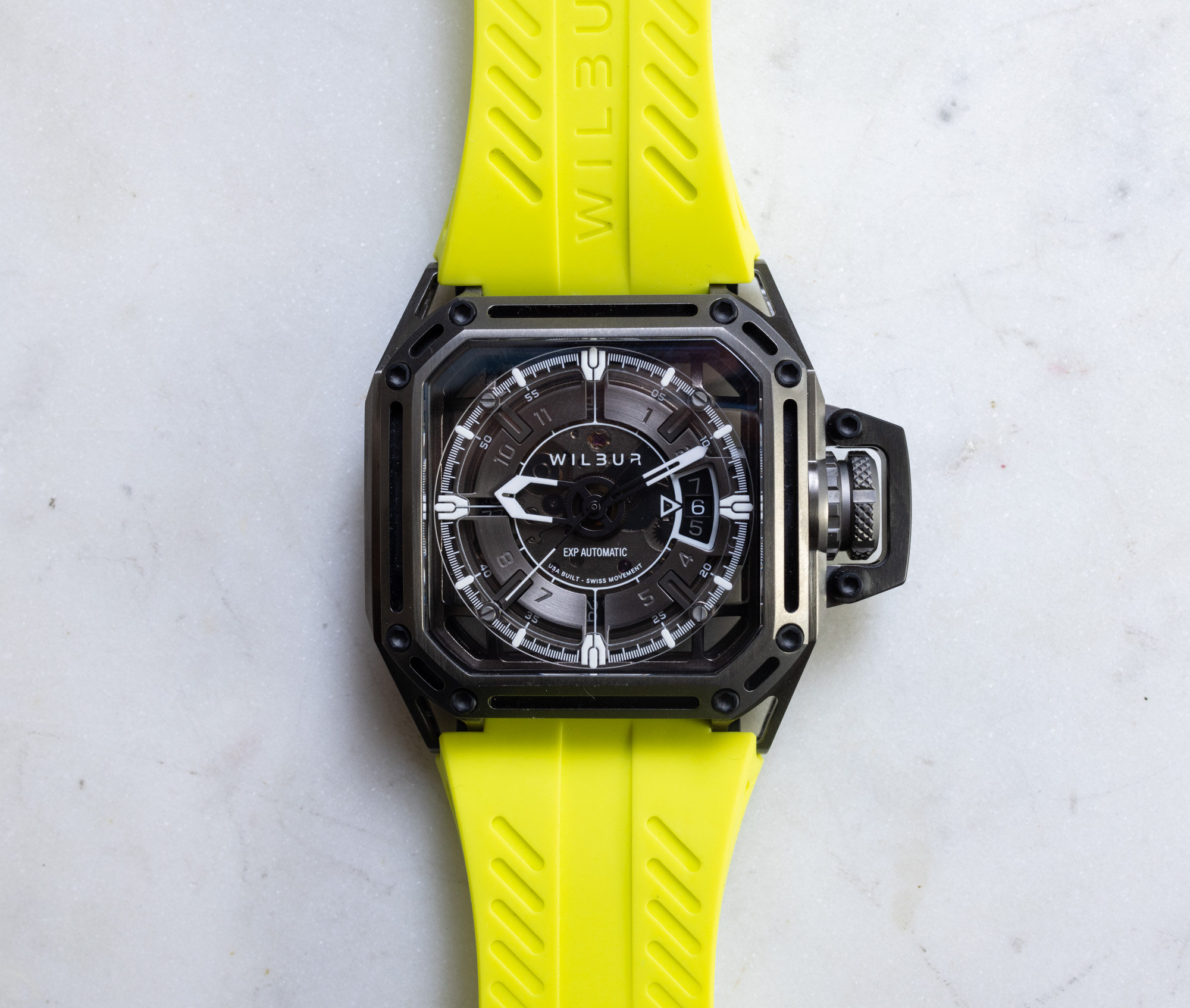 The watch dial has removed the large Arabic numeral 3 and 9 o’clock markers and given the face a cleaner look with improved hands and some other refinements and improvements. I find the low-light legibility of the dial to be higher now, while the look of the futuristic floating transparent ring with the markers on it still feels fresh and cool. This makes sense because Wilbur was specifically trying to adjust how the dial plays with the light. Just like the rest of this overall modular watch design, the dial of the EXP has a lot of built-in potential variety when it comes to textures, colors, and other details that can make future versions of this concept feel novel and interesting.

Inside the EXP watch is a base Swiss Made Sellita SW-2oo automatic movement. The watches are assembled in Scottsdale, Arizona, and designed in California, so they aren’t Swiss Made, but it is nice to see “Swiss Movement” along with “US / CA” engraved into the caseback. The movement grade seems like it could have had a bit more decoration at this product price, and it operates at 4Hz with 38 hours of power reserve. You can mostly view the movement through the caseback within the stylized movement holder cage. This is similar in style but quite different from the look of the caseback in the previous JWA watches. 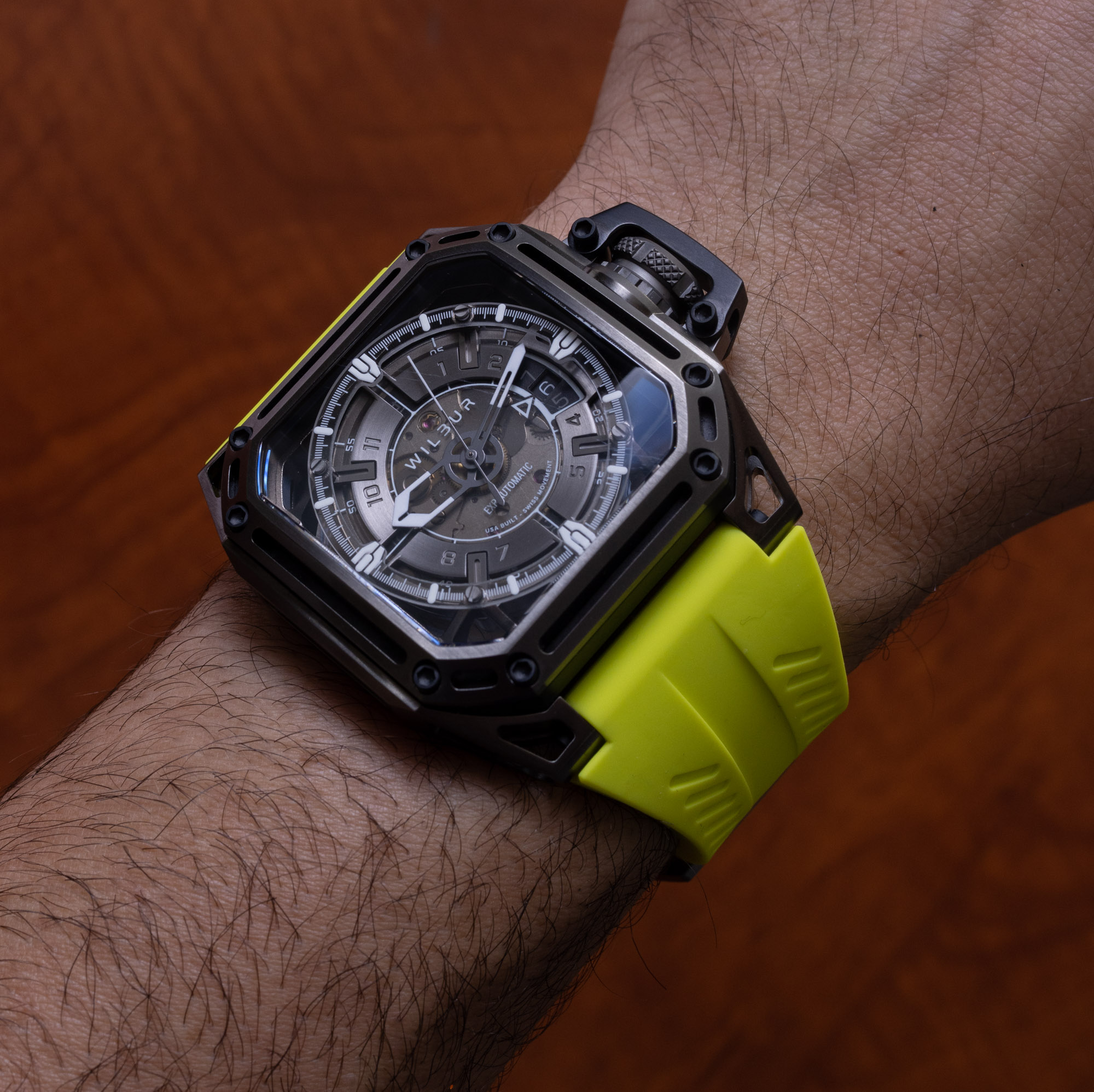 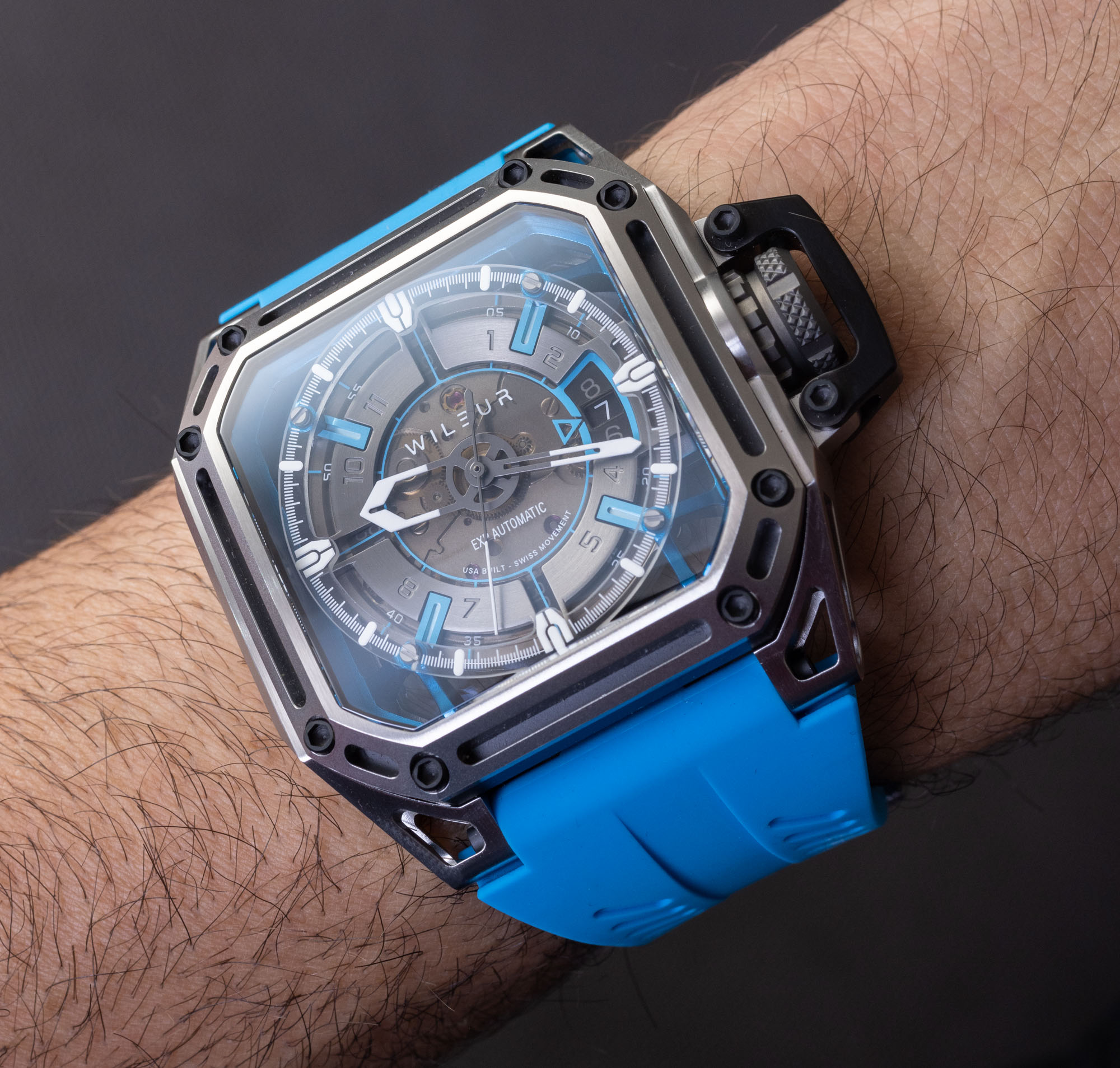 Also new for the Wilbur EXP watches are the straps. Still silicone, they now have a quick-release springbar system and also come in a few colors. Wilbur makes it possible to purchase additional colors, and the custom-designed straps are curved a bit at the ends to make them that much more ergonomic to wear on the wrist. Despite the large crown guard assembly that juts out a bit, provided you wear the EXP high-up enough on your wrist, the comfort of the timepiece is quite high, in my experience. This is especially true when you wear the silicone strap snugly, given that its texture naturally prevents too much slippage up and down the wrist.

Even though Jason Wilbur’s designs are often experimental (“EXP” is actually said to stand for “Experimental”), his ethos is good and the products are well-done. His long experience with watches at this point and focus on iterative design improvements have resulted in the EXP being a very well-conceived product that matches Jason’s imagination with consumer feedback and demands. The EXP watch is wearable and has the materials and components the timepiece hobbyist community expects. The biggest hurdle will be price and the fact that a lot of people simply need to put these watches on their wrists to make a final conclusion about them. The less expensive of the two launch models is the Wilbur EXP Battleship Gray Steel reference GUNSTL EXP-A. It is limited to 1000 pieces and has a retail price of $5,125 USD. The Wilbur Ceramic Steel Blue reference CRMC/STL-BLUE EXP-B1 is limited to just 100 pieces and has a retail price of $7,125 USD. Learn more at the Wilbur watches website here.