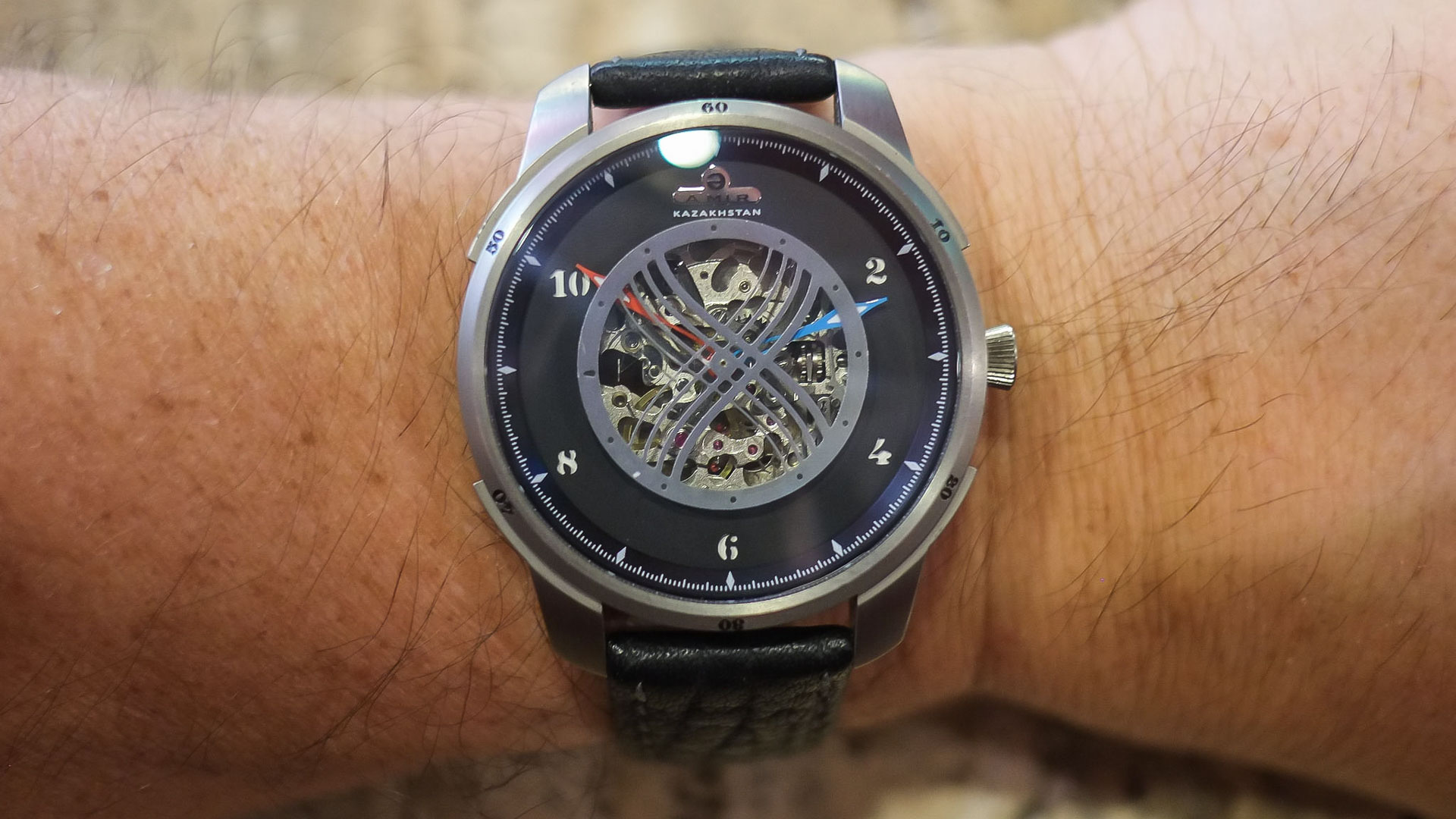 In April of 2018, the monthly giveaway watch on aBlogtoWatch was an Amir Watches Nomadic Empire Automatic watch. The winner was Neil C. from Portland, Oregon, USA and after enjoying his new timepiece (retail price $699), he has given a watch winner review for us to share with you – the aBlogtoWatch audience. Thanks to David and all the other watch winners who share their experiences with the world. Here is David’s review:

I entered the aBlogtoWatch April 2018 giveaway for an Amir Watches Nomadic Empire watch by answering the simple question of what my favorite watch featured at Baselworld 2018 was, with the answer being the Tudor GMT with its vintage aesthetic re-imagined. I had a choice of models to choose from and as I prefer silver colored metals over variations of rose gold, I went with the “Nomad” model in natural titanium. I think if a watch is made from titanium, it is certainly worth showing off its darker hue and its satin appearance. Likewise, with platinum, I don’t think anyone would want to coat that in a rose gold tint. I personally really like titanium. It is just over 1/2 the density of steel, and this watch feels very solid. Aluminum is 3/5th the density of titanium, and from limited experience, I find it to be much too light for a watch.

From the pictures on aBlogtoWatch and on the Kickstarter page of Amir Watches, the impression is this is a flashy, sporty watch. In rose gold, I think it would still be flashy, but having the titanium one in hand, the watch comes across as both sporty (as my photo out mountain biking shows 😊 ) and surprisingly quite dressy as well (as my photo of the watch, pink Johnny Cash T-shirt, and business shorts shows too!) I can’t comment on the leather travel pouch that takes two watches as stated on the Kickstarter page, as my gift watch came in a single watch box of a matte black soft-touch material that loves fingerprints. This was packaged instead inside a fitted cardboard box, and this was then inside two padded mail envelopes. I was happy with this relatively simple packaging, as it did its job. The main design element of the Amir Nomad is the rotating seconds disc, inspired by the Kazakhstani Nomad symbol of home, hearth, and heritage, the Shanyrak. This disc does have one marker larger than the others, so minutes and fractions can be tracked. The seconds track on the edge of the dial is some way from the disc and thus accurate second reading is not possible. Despite this, the seconds track also has 1/5th-second markers – these I feel are superfluous in function and in design, especially since the skeletonized Miyota 8N24 movement beats at 3Hz and not at 5Hz. Amir Watches is not the only watchmaker to have incorrect sub-second divisions, even such storied names such as Vacheron Constantin have a 4Hz in-house caliber in their Overseas model that has 1/5th-second markings on the dial.

Because of the size of the disc, the 3Hz is very obvious. I feel with such a large seconds display a smoother 4Hz movement should have been used. The Miyota movement, as capable as it is (currently +10s per day and an observed 44-hour power reserve), was initially quite jerky and the disc seems to rotate in jumps. This did bother me at first but after a couple of weeks it has gotten smoother in action, and I stopped worrying about any irregularity. It must be commented on – the disc does obscure much of the handset. This is not always an easy watch to read depending on the light or if I don’t have my glasses on. As Ariel writes in ‘Avoid Buying These Types Of Luxury Watches,’ avoid dials that are difficult to read. Luckily at the Kickstarter price (see later), this is should not be so much of an issue. I was pleasantly surprised to see that the hour marking was done by way of a sandwich dial, something I really like. The lume, however, was not very strong and of no use because the hands although appearing to be lumed, did not show up in the dark. Again this is a limit on readability, but day use really should be fine. The machine-like sculptured titanium 42mm case, with sharply styled lugs and a satin-finished black leather band, fit my flat 7.25″ wrist well and were very comfortable. The tang buckle is solid and feels nice, but was chromed and I think a satin-finished buckle would have suited the titanium case better. The Flieger styled crown is very easy to operate. Just pull it out one notch to set the time. The hands set quickly and you do not need to do many rotations to set the time. There is no hacking of the seconds, however. The disc, the sandwich dial, the skeleton movement, and distinctly styled case are all design elements I like, but the sharp-edged Flieger style crown is one design idea too many – a simple larger crown would suit it better. My wife and my friends all know about my love of watches and wondered about my opinion of its unique design, that most of them liked. I did wonder where this watch would fit in. As it was, it really is quite versatile and I have been wearing it most days these last four weeks. It is a fun watch that I can wear instead of my old and trusty Seiko when out and about during the day or at play, but it can also do dress service, either when at work or in the evening in lieu of my 1970s Omega. Do note, I do wear my Omega on a bright orange leather strap, so your idea of business may well be different from mine. Finally, I’d like to say a word about value. Everyone should wear what they like and choose too. I think at the specified MSRP of $699 it is very pricey for a watch with a basic but reliable Miyota movement from a new brand debuting on Kickstarter. But at the Kickstarter-available price of $279, this is a fine watch for its distinctive style. All caveats about Kickstarter, like any project on that platform, apply. Despite the design over-exuberance, I’ve come to really like and enjoy wearing this timepiece. Thanks to Amir Watches, and aBlogtoWatch for this great giveaway. amirwatches.com