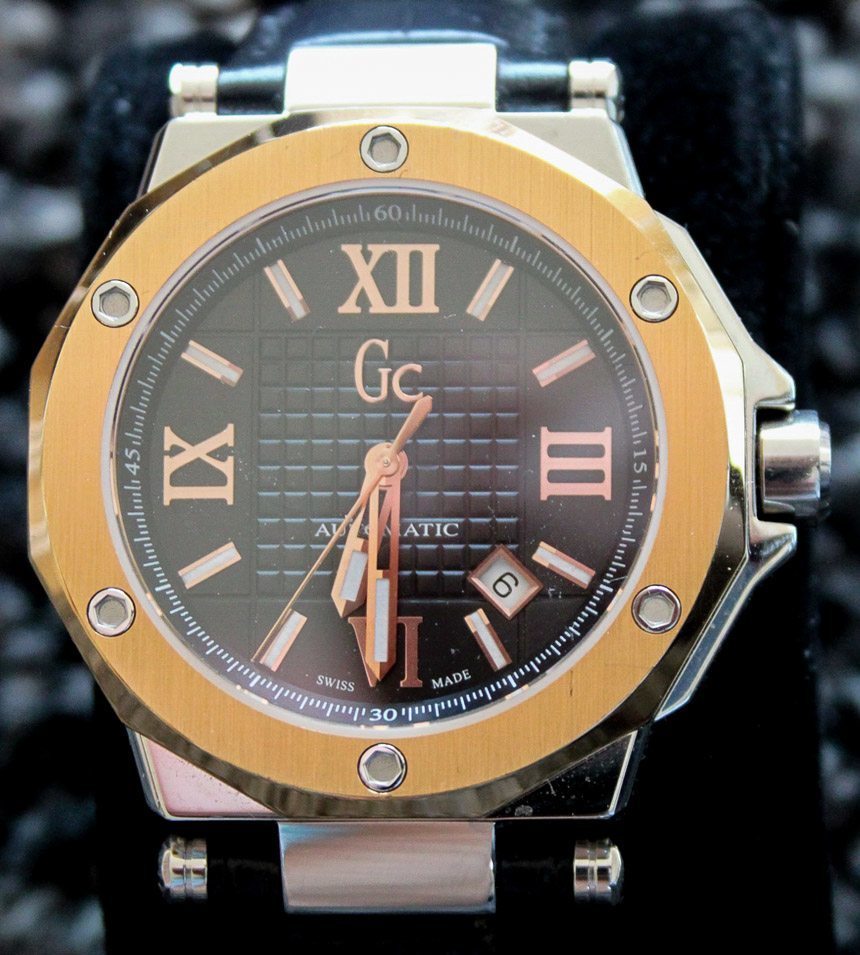 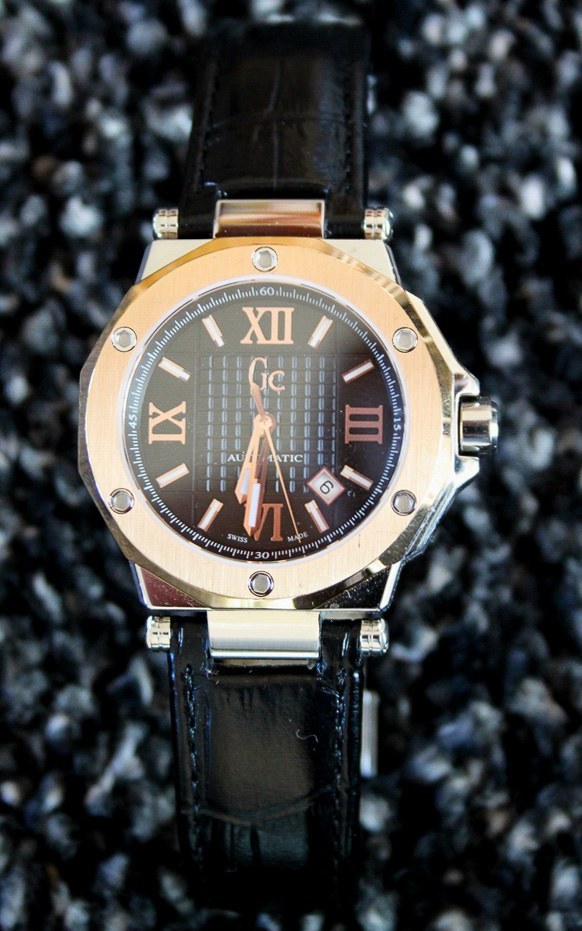 In January 2014 the aBlogtoWatch giveaway watch was a fine looking Gc Gc-3 automatic. Our fortunate winner was Mr. Oliver S., and he has returned with some thoughts and pictures of his new timepiece. We thank Oliver and many of the other watch winners for following the aBlogtoWatch tradition of following up after they’ve received their timepiece. See his thoughts below:

First off, I would just like to take a moment to thank aBlogtoWatch for selecting me, the lucky winner! It certainly was an incredible surprise – during an insomnia-fueled horology binge – to see an email from Ariel to flash up on my phone, congratulating me… ME! It was quite hard to believe at first that I had actually won. The phrase ‘but I never win anything’ has escaped my mouth a fair few times since the initial email, but it just proves that these things really do happen!

As many of you will know, Gc is a branch of Guess, and was set up in 1997. Guess make their own watches that focus largely on a fashionable look, but the Gc brand looks to combine form with functionality, retaining the fashionable aspect of Guess, and combining it with Swiss precision.

The first thing that hit me when un-boxing the watch was the gorgeous dial that sits behind the Gc-3’s sapphire crystal. The dial has a beautiful texture and bold Roman numeral hour markers at 12, 3, 6, and 9. I immediately put it on my wrist and took a few moments to feel the weight of the watch, and observe the central seconds hand spring into action (pun not intended).

I immediately loved the bulky, masculine aesthetic – what Gc call ‘sport chic.’  It measures a pleasing 44mm wide (I am a fairly tall guy, so this is a really nice size for me), but sits fairly flush to the wrist, with the aid of both its striking lug design (the ‘hinge-style’ lugs allow the strap to sit pretty much perpendicular to the case, if needs be), and a thickness of 11.7mm.

The Gc-3’s bezel – which is very reminiscent of that of an Audemars Piguet Royal Oak – and the unusual shape of the case and crown guard, makes the whole watch look slightly larger than the dimensions would suggest. You could describe the Gc-3 as being a bit ‘bling,’ but this is largely down to Gc’s fashion heritage, and it certainly is not ‘too much’ – for me, at least. 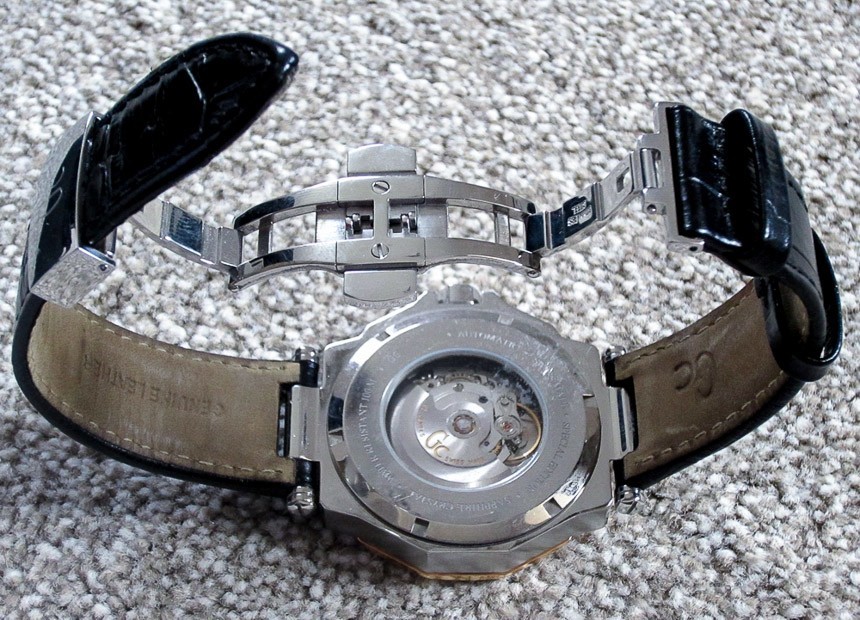 Something that you won’t spot in the website pictures (and I couldn’t properly capture in my own) is the level of finishing on the case, which was a really nice surprise for a watch in this price bracket. The underside and top of the case, and the edge of the bezel, are polished stainless steel, and polished PVD rose gold respectively; but the edge of the case and the top of the bezel exhibit a brushed finish, which is really nice to see.

This is complimented well by the croc-style leather strap with a signed deployment clasp. The crown is also nicely signed with the Gc logo, and is protected by the crown guard. My only complaint would be that, because the crown is completely polished, and considering it is screw-down (due to the Gc-3’s 100m water-resistance), this can make it difficult to unscrew occasionally.

Turning the watch over you will see ol’ reliable – the famed workhorse, ETA 2824-2 date movement – through an exhibition case-back. Gc did a really nice job of finishing the rotor, and it makes for a pleasant view when watching the balance beat away. 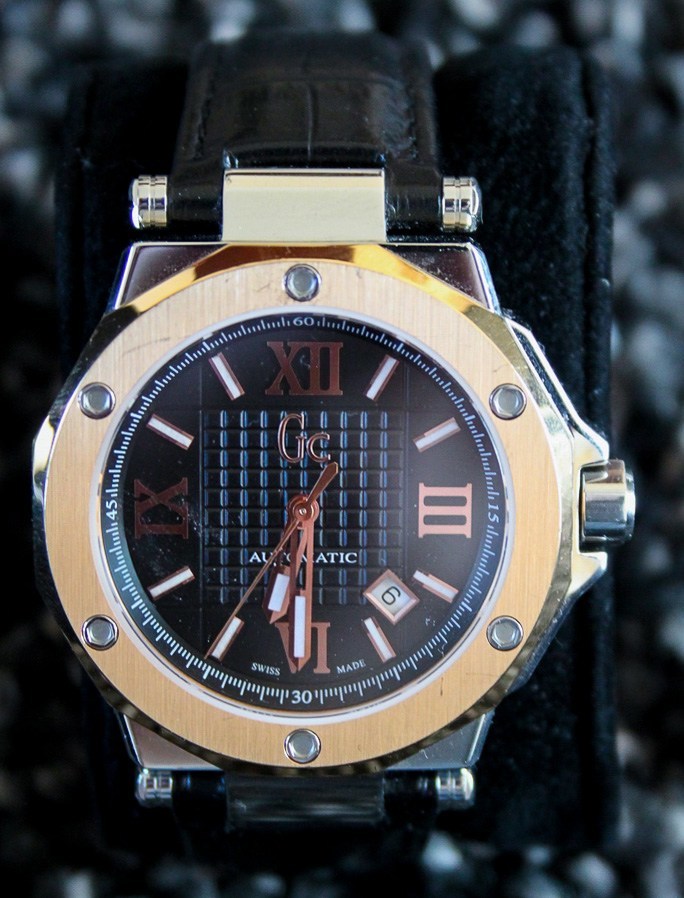 Overall, I am very happy with the Gc-3. It is a versatile watch with a great aesthetic that I really enjoy having on my wrist. I was aware of the brand before this giveaway, but after winning the watch and spending some time with it, I have taken a good look at the rest of the collection, and I would urge you to have a look yourself, especially if you are looking for a good looking, entry-level timepiece, with a solid movement. Many thanks to Gc, and aBlogtoWatch for selecting me as January’s winner!