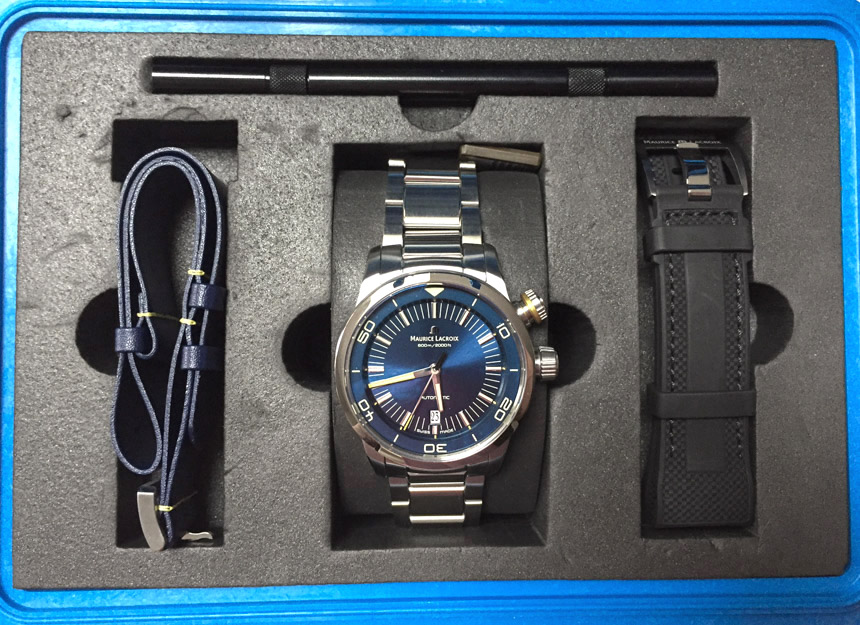 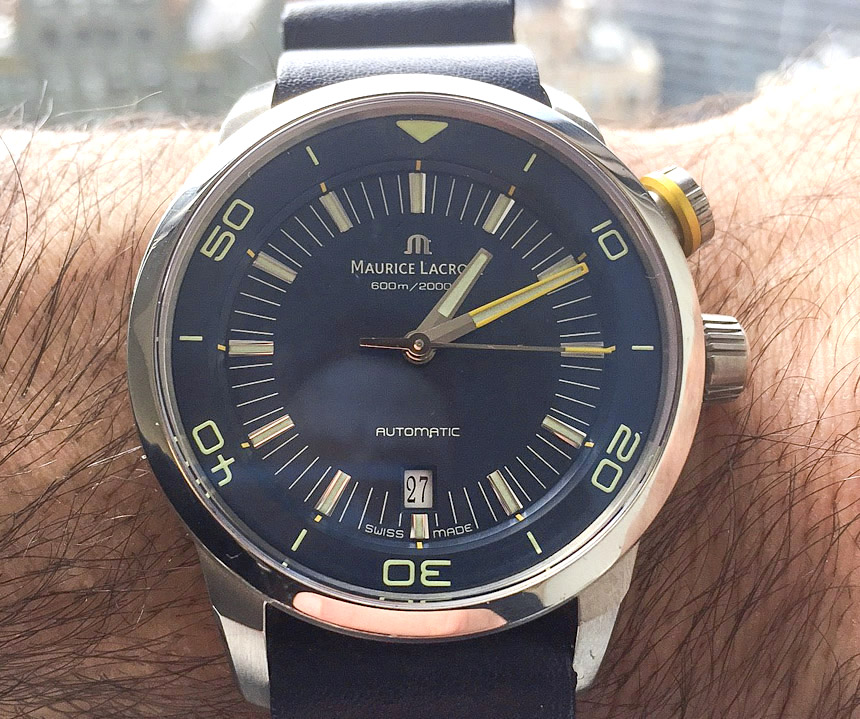 In November of 2016, the monthly giveaway watch on aBlogtoWatch was a Maurice LaCroix Pontos S “Blue Devil” Diver watch. The winner was Chris B. from Glencoe, Illinois, USA, and after enjoying his new timepiece (retail price $2,950), he has given a watch winner review for us to share with you – the aBlogtoWatch audience. Thanks to Chris and all the other watch winners who share experiences with the world. Here is Chris’ review:

In all honesty, I’d never paid much attention to the monthly “Watch Giveaway” contests on aBlogtoWatch in my 4+ years of regular reading prior. I was over contests and sweepstakes due to a still “chilling” memory from my childhood in which I had thought I won the Publisher’s Clearing House Sweepstakes only to find out from my parents that I had been duped. That had ruined the thrill at an early age, and it still haunts me to this day.

Fast forward to present day where I’m still veeeery skeptical of all contests and sweepstakes… even more so since I’ve worked in media sales and marketing for the past 15+ years. So I barely registered the monthly contests on aBlogtoWatch. But that all changed one late night in November when I saw the Watch Giveaway post for the Maurice LaCroix Pontos S Diver “Blue Devil” asking entrants to “mention an animal or fish you would like to see inspire a dive watch, why, and how it would be reflected in the watch design.” I kept looking at the glossy pics of the watch, with its strap combinations and manly “Blue Devil” name, and I couldn’t get it out of my head. So while tossing and turning in my bed around 2am, unable to sleep over some work boggle later that night, I threw caution to the wind and tapped out what I thought was a clever and well-thought-out reply to the challenge and submitted it into the ether. 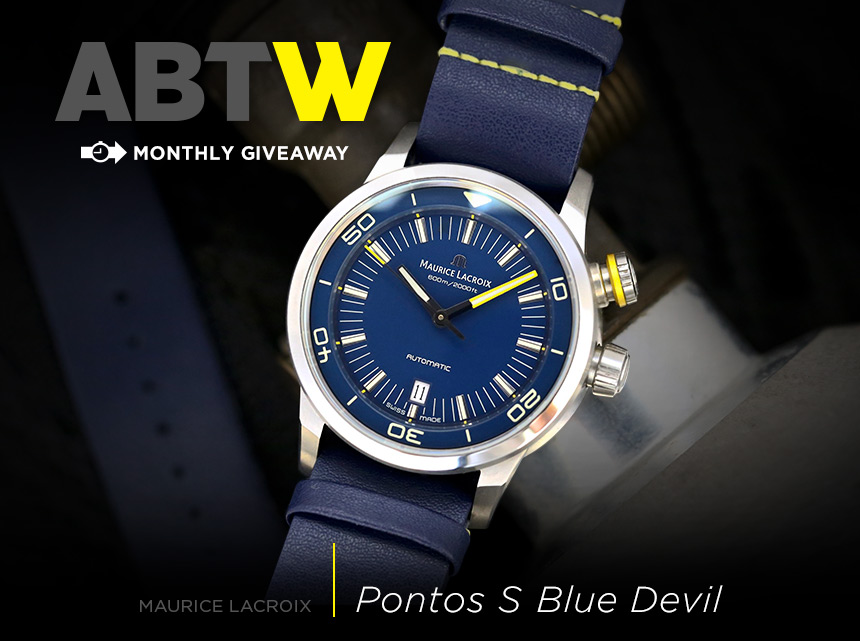 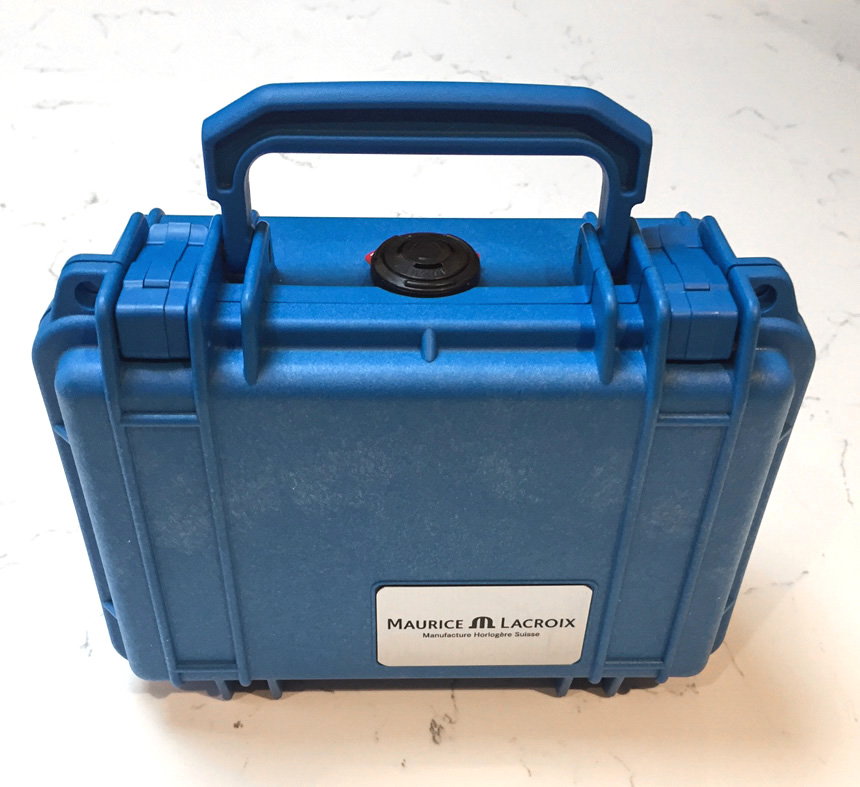 As soon as I pressed “send” I had a gut feeling that my entry could be a winner… or maybe it was just foolish Publisher’s Clearing House naiveté all over again? Naiveté be damned, that feeling I had felt real enough that I told myself I would hold off pulling the trigger on my “blue watch” purchase until after the contest winner was announced, just in case. 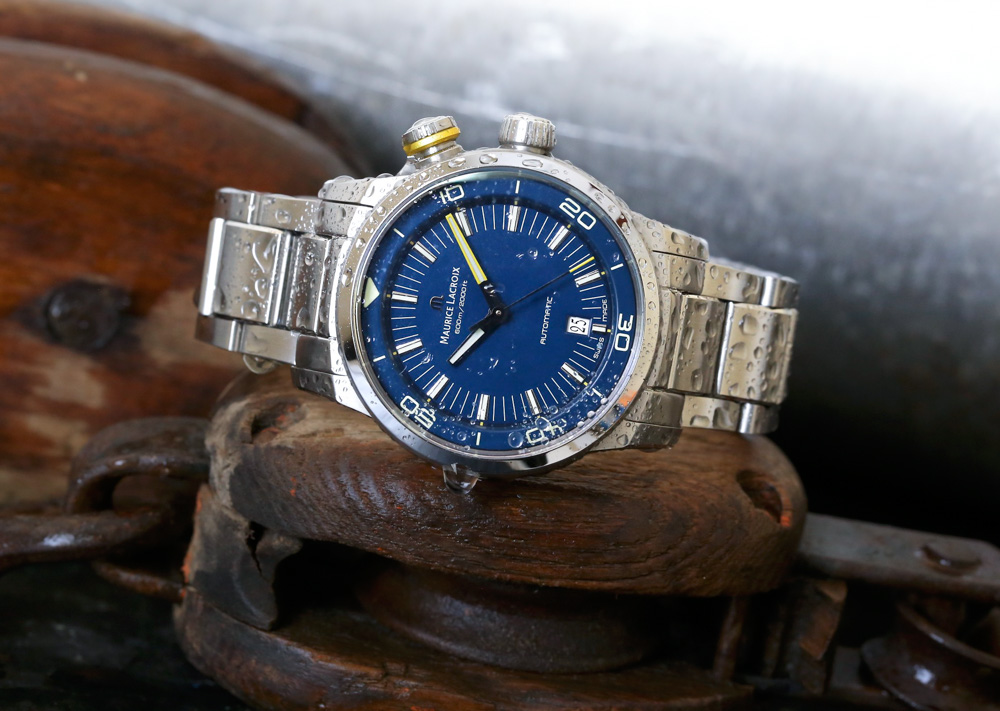 So after a few days in December passed, I thought I had fooled myself once again into thinking I could be a winner and was all set to pull the trigger on a piece from my shortlist. But then… what was that? An email in the spam folder of my seldom used AOL account from aBlogtoWatch letting me know that I had won the November giveaway and had 24 hours to respond or the prize would go to someone else. I NEVER check that AOL spam folder as it’s filled with years upon years of AOL detritus. But fortune had been smiling on me that day as some unseen power compelled me to click on that spam folder no more than 10 minutes after the aBlogtoWatch email had been sent, so I somehow caught it while it was still fresh at the top. I let out a hearty “YES!!!” and my wife and 5-year-old son looked at me quite bamboozled. I showed my wife and she said it was just a phishing email and junk. But I knew better and replied immediately to confirm my acceptance and shipping info. And a few short days later, the glorious package arrived at my door. Happy Holidays to me! 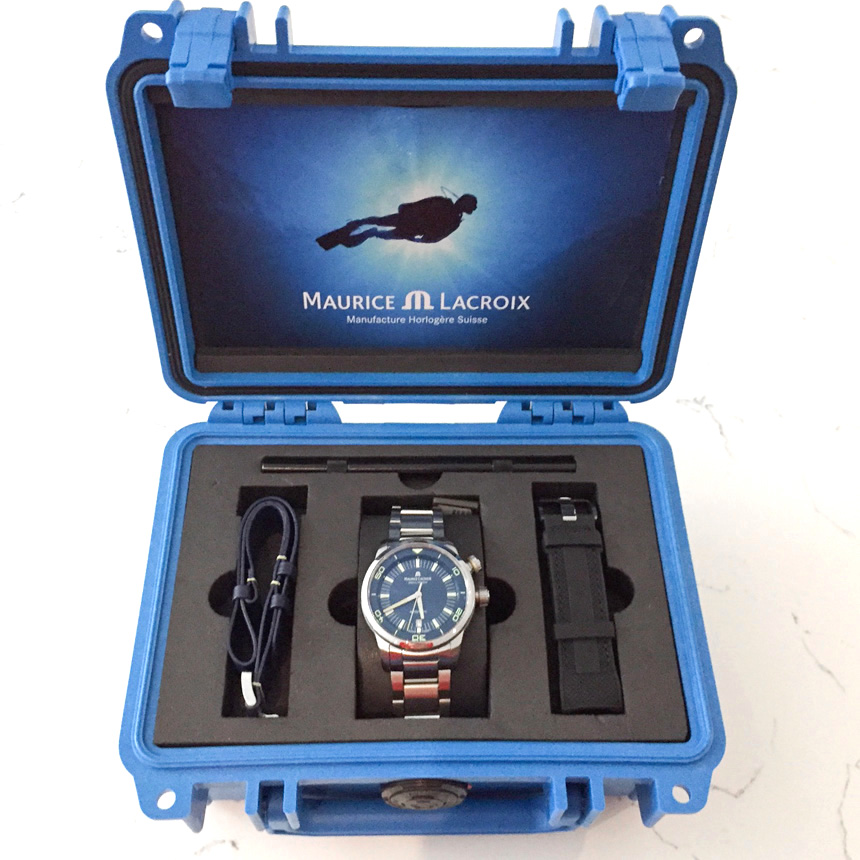 First off, the watch comes in a very impressive and smartly packaged attache-style blue Pelican case that has the feeling of a “treasure chest” that has been found at the bottom of the ocean after a deep dive under a sunken ship (see pics). Good on ya’ Maurice LaCroix! Unbuckling the latches only builds anticipation to the “treasure” inside. Once opened, the watch is displayed in a snug center cutout on the heavy duty stainless steel bracelet flanked by a corresponding custom blue calfskin “NATO” strap and black rubber strap, as well as a custom strap-changing tool. The overall package gives the impression of a watch I’d guess could cost a lot more and elegantly reinforces both the seriousness and playfulness of the diving alignment and utility. 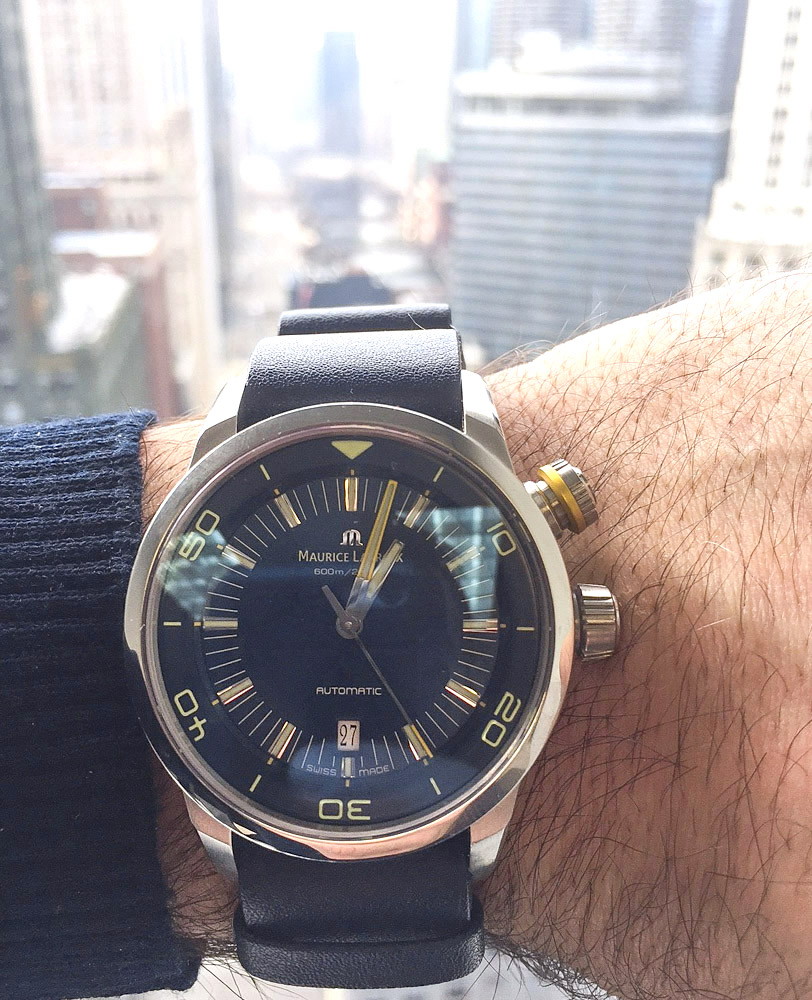 The first thing that jumps out at you in person—and that jumped out at me when I saw the teaser pics of the watch in the giveaway promo post is the blue dial. Not quite an aqua, not quite a navy, and not quite an indigo, the rich blue color of the face is truly beguiling, and one that I haven’t seen represented in a watch before. While blue dials may be all the rage right now, none that I have seen compare to the rich and deeply saturated sea-blue of the Maurice Lacroix Pontos S Diver Blue Devil. It’s a color very much befitting of the “Blue Devil” name and a definite show stopper that generates a lot of “I love your watch. What kind of watch is that?” comments which are always appreciated! 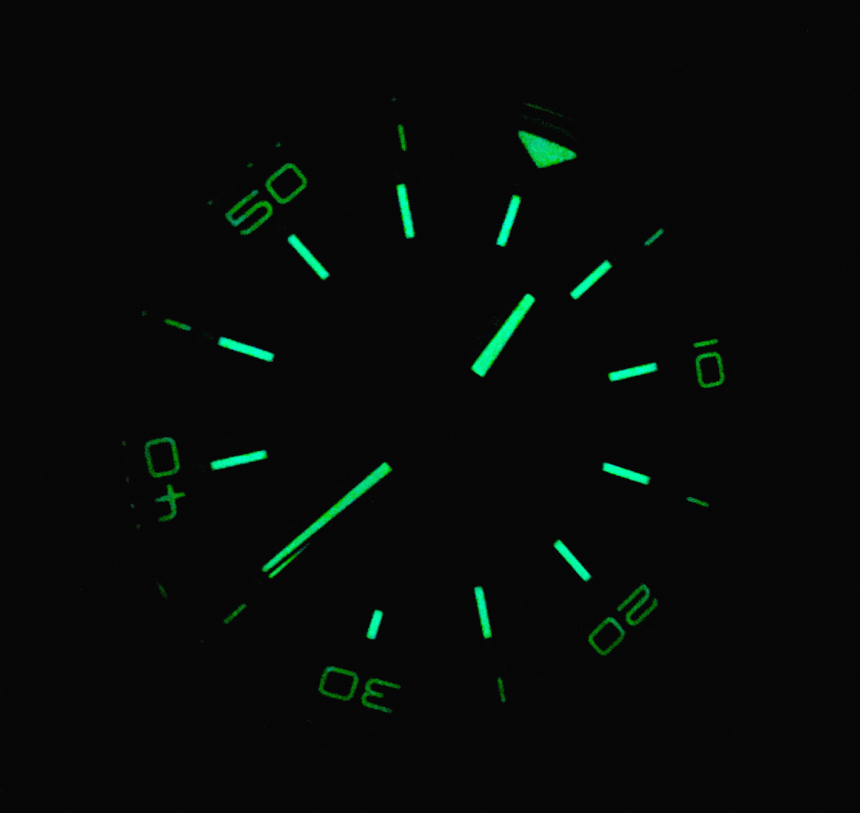 Equally impressive is the smart choice of the almost fluorescent yellow dialing and numbering offset by shimmery gray and white minute markings. Even the yellow tip on the second hand and on the offset crown for the rotating inner bezel is a subtle yet functional pop of color that flows seamlessly with the color palette of the face. The blue and yellow (especially complemented by the steel case and strap combinations) is a stunner. The lume is also very strong in a good way. Perhaps it will fade with time, but the lume adds the aforementioned fluorescent shimmer to the yellow markings on the dial giving the numeration a suggestive glow even in daylight that is enchanting to the eye at a short glance or deep gaze. 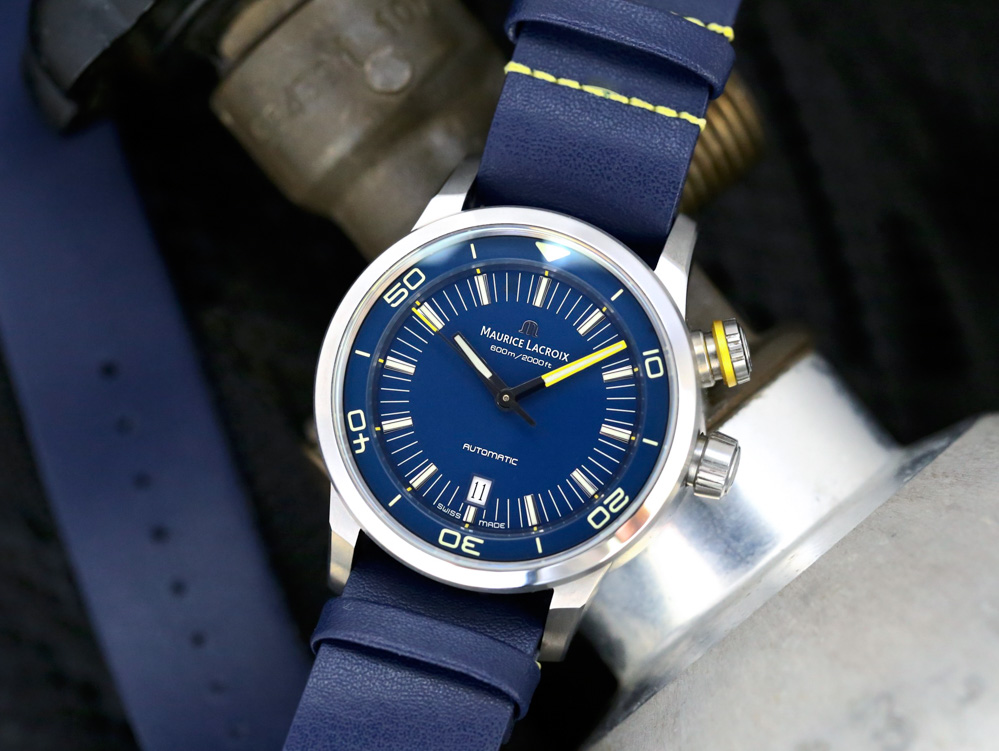 There’s even a very easy-to-read and seamlessly integrated date function in white at 6 o’clock. Yes, the date function can be a hassle sometimes on an automatic watch when the power reserve runs out and you have to reset the time and the date (especially in a short month like February) but I’d take that hassle seven days out of seven for the simple additional date function on a watch. Keeping my phone in my pocket, I always forget the date and having it right in front of me on my watch is definitely a nice feature to have and something I always look for on a watch (especially as a father of a 5-year old who is ALWAYS asking me what day it is). 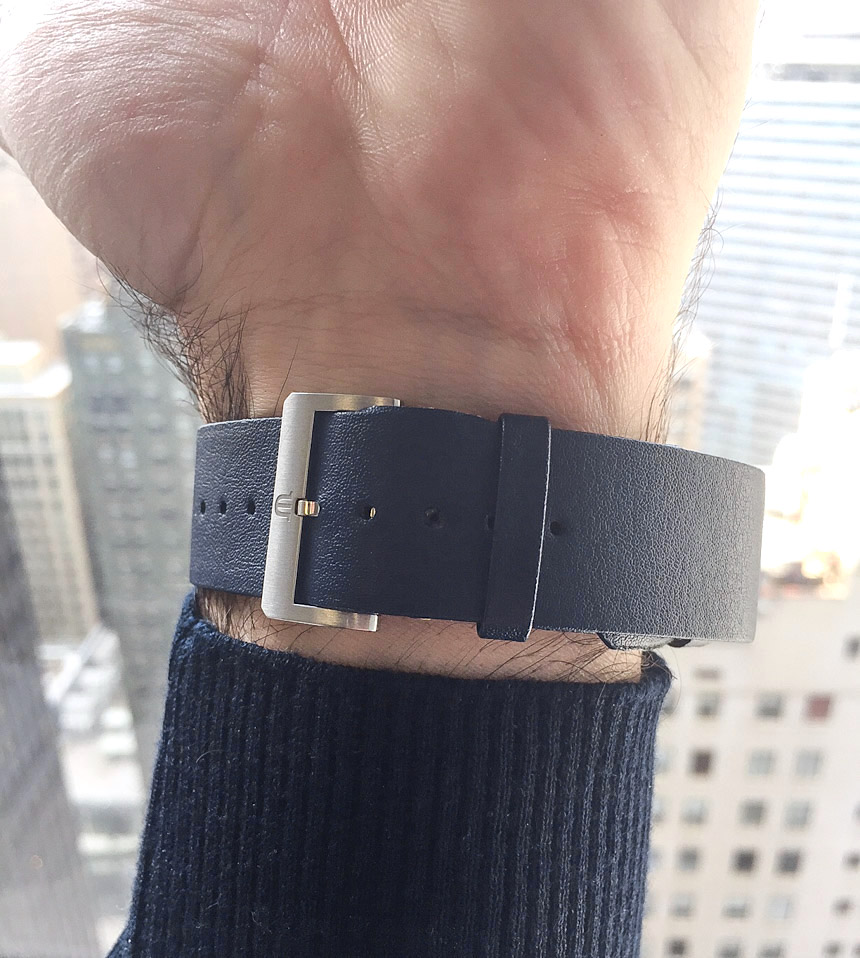 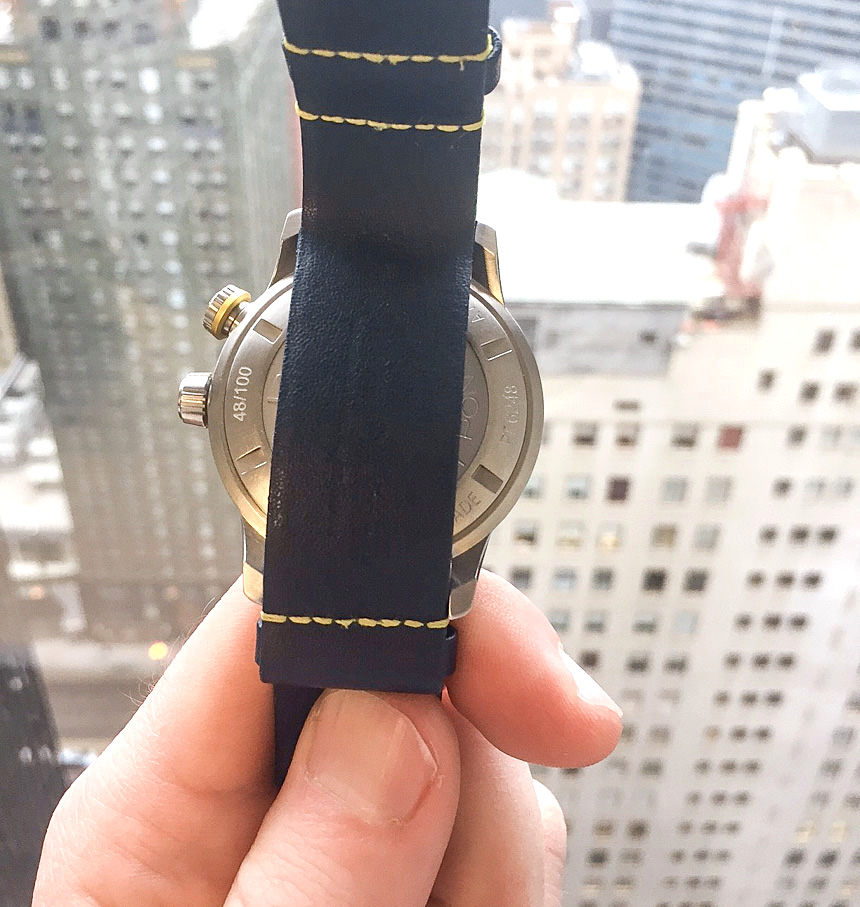 Winding is simple and easy via the crown at 3 o’clock. There’s also a helium release valve on the opposite 9 o’clock – a function that I’ve seen discussed in many reviews as a bit of an antiquated and overkill feature – except for serious divers. I would agree with that. I’m not a diver or even snorkeler of any kind, so that function is entirely useless to me. I guess it adds to the credibility of the watch as a true dive tool (much like the 600m water resistance) but you won’t ever find me in waters that deep. In my layman’s opinion, the arms race for depth resistance is a little much. It doesn’t need to be called out on the face. Having it subtly noted on the back of the watch would be fine for me. A player’s stats are on the back of the baseball card, not the front. The same should apply for watches, in my opinion.