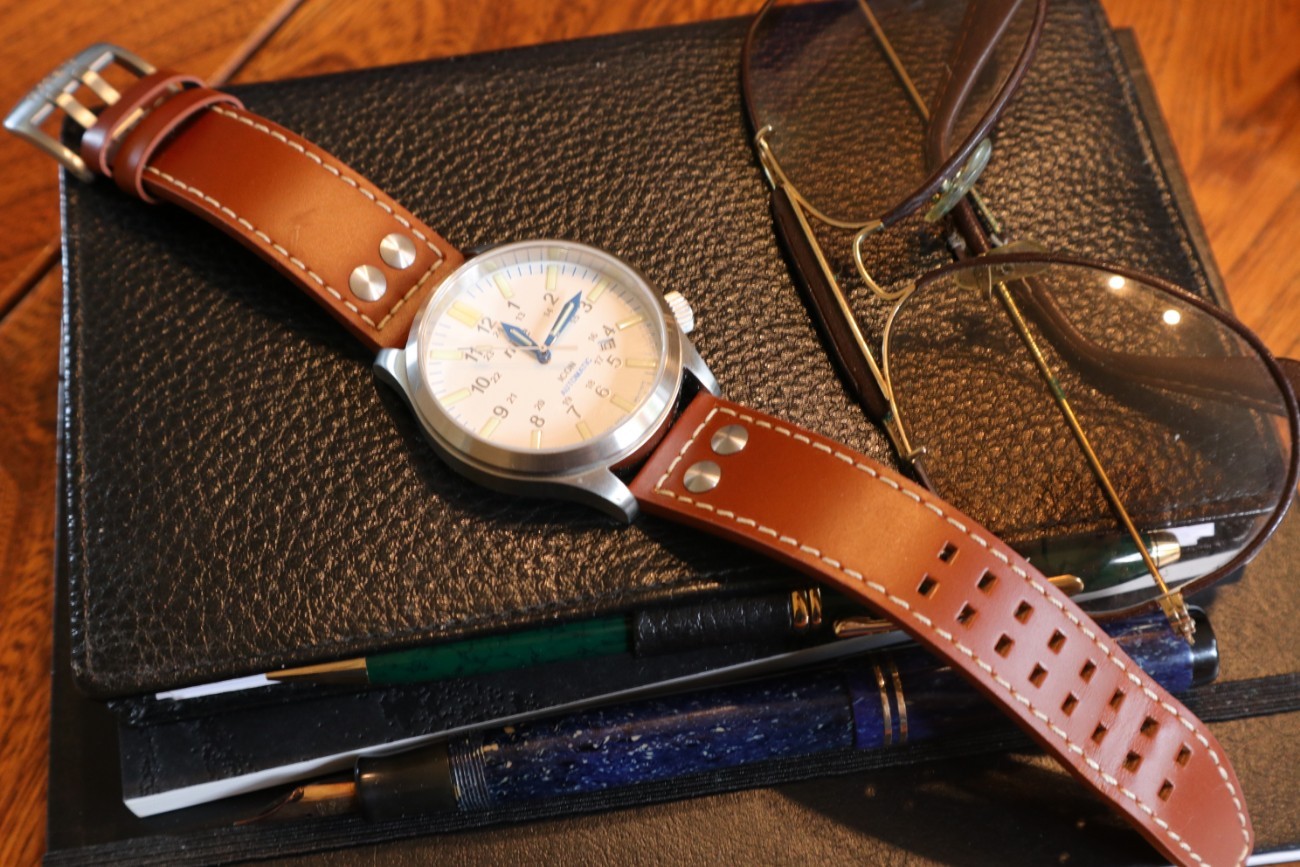 In March of 2018, the monthly giveaway watch on aBlogtoWatch was a Nite Icon-212 Green T100 Automatic watch. The winner was David Williams from Bristol, UK and after enjoying his new timepiece (retail price $930), he has given a watch winner review for us to share with you, the aBlogtoWatch audience. Thanks to David and all the other watch winners who share their experiences with the world. Here is David’s review:

Nite Watches, founded by Roger Green in 2003 and based in the scenic and historic county of Dorset on the south coast of the UK, is an independent British watch brand (too long-established to be described as part of the current wave of microbrands) offering a range of robust, legible and stylish watches online. They all have self-powered tritium illumination and are aimed at wearers with active lifestyles. The Nite Watches website neatly sums up the company ethos with the tagline “Nite Watches let you tell the time, any time.” All Nite watches have GTLS – Gaseous Tritium Light Source – illumination as a distinguishing feature, so that night-time legibility is especially good. Nite was initially a supplier of watches to UK armed forces and civilian emergency services – and remains so – but also offers an attractive range of watches online to the wider market, mostly with Ronda quartz movements.  Nite’s Alpha, Hawk, Icon and MX10 ranges derive from familiar design inspirations – diver/sport, adventure/expedition, aviator and field watch. There’s also a dressier and slimmer option, the Marquess, which nevertheless retains the robustness and high legibility inherent to the brand. The Icon Automatic is Nite’s first venture into producing a mechanical watch, as an evolution of their existing Icon quartz.

My first impressions upon receiving the Nite Icon-212 Green T100 Automatic, to give it its full name, were very favourable. It arrived with time and date set correctly and I was greeted by the pleasant aroma of leather from the strap, which is evidently of good quality. It’s possible to discern aviator and field-watch inspirations in the design – in the hands, 24-hour numerals and utilitarian all-brushed steel case – but this is a modern rather than vintage take on these, which succeeds in establishing an identity all of its own. The designers have clearly put great effort into ensuring that every feature has a sound reason for being there. The 316 stainless steel case is very finely brushed, giving a subtle satin sheen, and the plain bezel is a prominent feature. The sapphire crystal has triple anti-reflection coating, which is very effective, and there’s an exhibition case back. The screw-down crown, at four-o-clock, bears the Nite logo and is sufficiently large and grippy to operate while wearing gloves. Water resistance is a reassuring 100m. The dial is pure white (there are also black and blue-dial versions) with a finely corrugated surface texture. There’s a plain and not especially large date window between 4 and 5, a position that has the advantage of not cutting into any of the numerals.

At 44mm diameter and some 14mm depth, the watch has a substantial presence. The lugs, though, are modest in length (a whisker over 50mm between their extremities and around 48mm between spring bars) so it sits well on all but the smallest wrists. The humble millimetre, an insignificant measurement in many applications, has such a profound effect on watch design! Every tritium tube you’re likely to see in watches of any brand will have been made by one company – mb-microtec of Bern, Switzerland. In addition to Nite watches, they’re used by Ball, Marathon, Luminox and others – and in mb-microtec’s own in-house brand, Traser. Tritium gas is sealed in small glass tubes, the insides of which have been coated with zinc sulphide – a luminescent material – which is made to glow by electrons released from the tritium during its very low-level radioactive decay. The light emitted is perhaps a little less bright than a large dollop of Superluminova, freshly charged by bright light, but of course retains constant brightness over time, while conventional lume fades in a matter of hours.

The Nite Icon’s tritium illumination is as prominent as you’d expect from a company that makes this technology a declared selling point, with large hour indices and smaller tubes on the three hands. The tritium illumination kicks in before it’s properly dark; there’s an enjoyable cross-fade as twilight gives way to night and the lume takes over. Nite uses two levels of illumination – T25, which has a total radiation of up to 25 millicuries (yes, for all the tubes added together) and T100, with up to 100 millicuries for the whole watch. T25 uses tiny cylindrical vials; T100, as on the Icon Automatic shown here, has larger rectangular cells. The radiation levels are very low, in comparison with other sources to which we are exposed daily in the environment. To put them into perspective, even eating a banana every other day apparently gives you a higher dosage than might escape from a damaged T100 watch. The radiation is so weak, it’s incapable of penetrating human skin and a sheet of paper will stop it. It has a range of only 5mm in air; tritium oxidises very quickly on contact with air. Tritium illumination is therefore a very safe and proven technology. The watch I received has green hour indices – hence the “Green” in its name – except at 12-o-clock, which is orange. Other Nite watches have blue illumination, which is especially desirable in a diver’s watch, as blue light remains visible to a greater depth underwater than green.

Some may feel that the hands are a little short, but I can see the logic behind it. Understandably for this brand, the hands leave the luminous indices unobscured as they pass by. It all makes great sense in the dark but the dial is also easily legible in daylight. On the white-faced Icon, the hands are finished in a strong shade of blue, giving them a prominent visual presence. The minutes hand links naturally to the similarly blue minutes/seconds track – the human eye-brain combination instinctively and easily completes this kind of visual puzzle. The hour hand relates to the 24-hour numerals, which appear bright silver or a darker grey, depending on the light. The seconds hand has a blue tip, again relating to the blue indices. The dial is well-designed, with legibility evidently a high priority; it’s never difficult to tell the time, day or night. So, what exactly is tritium and how does tritium illumination work? In a nutshell, hydrogen has two “heavier” isotopes: deuterium (heavy hydrogen), which has a neutron in addition to the proton and electron of hydrogen, and tritium (super-heavy hydrogen), which has two neutrons. Very small quantities of tritium occur naturally in the atmosphere, the result of hydrogen atoms being zapped by cosmic rays – trace amounts are brought to the ground by rain. Commercially viable amounts are produced as a by-product in certain types of nuclear reactor; the nuclear industry of Canada is a prominent supplier. Production and handling of tritium are subject to the highest safety standards.

Tritium is unstable and, consequently, mildly radioactive. That’s what makes it useful in watches. It emits electrons as it decays, causing the zinc sulphide coating on the inside of the sealed tubes to glow. Different colours are achieved by varying the coating; brightness is dependent upon the pressure, and therefore quantity, of gas in the tube. Tritium has a half-life of 12.3 years and will remain effective, without charging from a light or power source, for a good 20 years or more. Tritium lighting has other uses too, in critical situations where battery or power failure would be a disaster: in military gun sights, marine compasses and Exit signs for buildings and aircraft, for example.

ABTW’s David Bredan had the good fortune to visit mb-microtec a few years ago and his article  is well worth a read. In tribute to mb-microtec’s impressive micro-engineering skills – and because this is a Nite watch – here’s another lume shot, showing the tritium tubes becoming visible as daylight fades. It’s a pretty cool light show! The Icon Automatic is powered by the Sellita SW200-1 movement, which is equivalent to the ETA 2824-2. It’s the plain (and entirely appropriate) Standard version, with non-decorated rotor and gilt balance wheel, visible through the exhibition case back. Given that ETA restricts availability of its movements to Swatch brands, it’s helpful that Sellita movements – Swiss-made in La Chaux-de-Fonds – are available to all. The Sellita SW200-1 movement has 26 jewels and a 38-hour power reserve – with hacking, hand winding, Incabloc shock absorber and quick-set date. It operates at 28,800 vibrations per hour – 4Hz – so the seconds hand moves smoothly around the dial. I find that mine runs well within the quoted accuracy of plus or minus 12 seconds per day. The strap is a substantial piece of thick leather, with two rows of holes and a two-pin buckle, and gives every indication that it will last a good while. Lug width is 22mm. I had thought that the buckle might be a bit fiddly but, no need to worry, the pins extend from a single tang and go into place easily. The leather, tan in this instance, is of good quality and is well treated. Two pairs of rivets contribute to the aviator look.

The Nite website lists this same strap also in black and dark blue, along with the option of a steel bracelet or several colours of Nato strap – all at commendably reasonable prices, which makes a pleasant change from a brand’s own website. The watches are accessibly priced too; this particular Nite Automatic, on the strap, retails at £625. In conclusion, I venture to suggest that most ABTW readers probably own at least a couple of watches, maybe several – possibly including a finely crafted and much-prized timepiece from a prestige manufacturer and maybe a more robust watch for more active off-duty days. Nite watches satisfy this latter requirement with considerable style. They convey a reassuring confidence that here is a brand long proven as a supplier to armed forces and civilian first-responders. For the rest of us, who aren’t actually in the military or emergency services, robustness and rugged good looks are appealing characteristics. I prefer to avoid the term “beater” – which, to me, somehow implies malign intent – and tend to think more in terms of weekend, outdoor, travel, adventure or expedition watches. If you’re looking for a watch that is tough and functional, with an appealing “can do” style, you should take look at Nite’s website you’ll find good things there. Nite clearly has the contacts and design expertise to produce some interesting and handsome watches, and I wonder what they’ll do next. I stand by the comment that won me this watch – “Given that Nite already have the main professional design inspirations well covered (field watch, diver, aviator) how about a fun and extrovert weekend watch – bordering on the fashion category – in which multiple colours of lume are put to decorative as well as functional use. In men’s and women’s versions, of course! Or – at the opposite end of the aesthetic scale – a robust and understated expedition-style watch with brushed surfaces and subdued dial colours, definitely including green!”.

Very many thanks to ABTW and Nite Watches for such an excellent giveaway and for the opportunity to learn about tritium illumination. I’ll be wearing this watch a lot!